Austria has thrown up some fantastic football talent over the years. Players from past and present such as Matthias Sindelar, David Alaba, and Josef Bican spring to mind. Even in the past few years, some excellent Austrian players have developed all over Europe including Marcel Sabitzer and Konrad Laimer at RB Leipzig, as well as Florian Grillitsch of Hoffenheim.

However, a new Austrian prospect has rocketed onto the scene and looks to be a top player in the future. His name – Yusuf Demir. Demir currently plays for Rapid Wien in the Austrian Football Bundesliga and has looked utterly electric when in green and white for the Vienna-based club.

The 17-year-old made his debut in December 2019 when he was merely 16 in a 3-0 win against Admira Wacker, but this season, under manager Dietmar Kühbauer, the prodigy has been trusted to feature in 22 games already this season in all competitions, a huge number of games for such a young player.

Following his impressive form this season, big European clubs have already been knocking on Rapid Wien’s door to enquire about the possibility of bringing Demir in the summer, most notably Manchester United, Real Madrid and Barcelona who are the three leading the race, according to recent reports.

This article will be a tactical analysis of the wonderkid in the form of a scout report. It will be an analysis of Demir’s style of play and overall ability as well as how he fits into his team’s tactics.

Positioning and style of play

Demir can play in a number of positions across the frontline due to his versatility. He is also very adept at playing as an attacking midfielder, predominantly when his side utilise the 4-2-3-1 formation.

The youngster has been utilised as a number ten in 39 percent of the games he has featured in throughout his career, whilst he has played in any position variation on the right 42 percent of the time, with the other 19 percent being positions from anywhere off the left and even as a defensive midfielder.

However, this season, Kühbauer has preferred to play his starlet as an attacking midfielder mainly as it gets the best out of the 17-year-old. 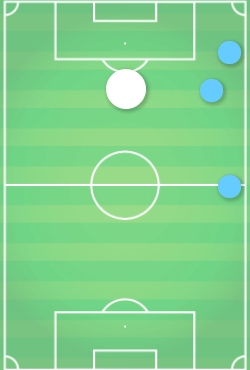 The Austrian is 5ft 10 in height and weighs 65 kilograms, and so has a solid physique to strike the perfect balance between being able to ensure that he is not outmuscled against more physical opponents, but also is has a very Lionel Messi-like low centre of gravity when dribbling with the ball – one of his best attributes.

At the age of seventeen, there is still potentially room for the player to grow, in terms of his height, for perhaps another year or slightly more.

Demir’s all-round play is very impressive. The teenager has been given quite a free role in the Wien side when he plays for them, especially as an attacking midfielder, mainly to optimise his talents rather than hinder them with too many instructions.

From Demir’s heatmap, we can see this free movement in the form of a visual representation: 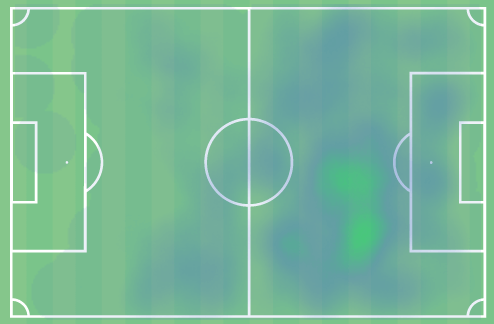 This is purely just a heat map aggregation from when the Austrian plays as a number 10. The most notable aspect of the visual representation is that Demir still prefers to operate slightly off to the right and in the right half space so that he can cut inside on his preferred left foot, which is where the youngster can be most dangerous. This will be analysed in further detail later in the article.

Top 5 dribblers in the league

For a player who is only 17 years of age, Demir has already established himself this season as one of the best dribblers in the league and the stats back this up. His low centre of gravity allows him to change direction and accelerate at quick bursts to manoeuvre away from onrushing defenders.

The top three players on this table have only played a combined total of seven matches, which makes Demir’s metrics all the more impressive.

If we narrow the list down even further only to players who have made a minimum of five appearances in the Austrian Bundesliga, the 17-year-old is second on the list of the highest number of dribbles per 90. His completion rate of dribbles is also 50 percent, meaning the attacker wins roughly one in every two dribbles, a great record.

The Wien player also averages 1.99 accelerations per game as of writing, the sixth-highest in the top-flight division.

When in a 1v1 situation against an opponent, Demir’s natural instinct is to try and get himself into a central position which is where he is most dangerous on a football pitch. He does this by using body feints and a drop of the shoulder, combined with rapid changes of direction to ease past opponents. 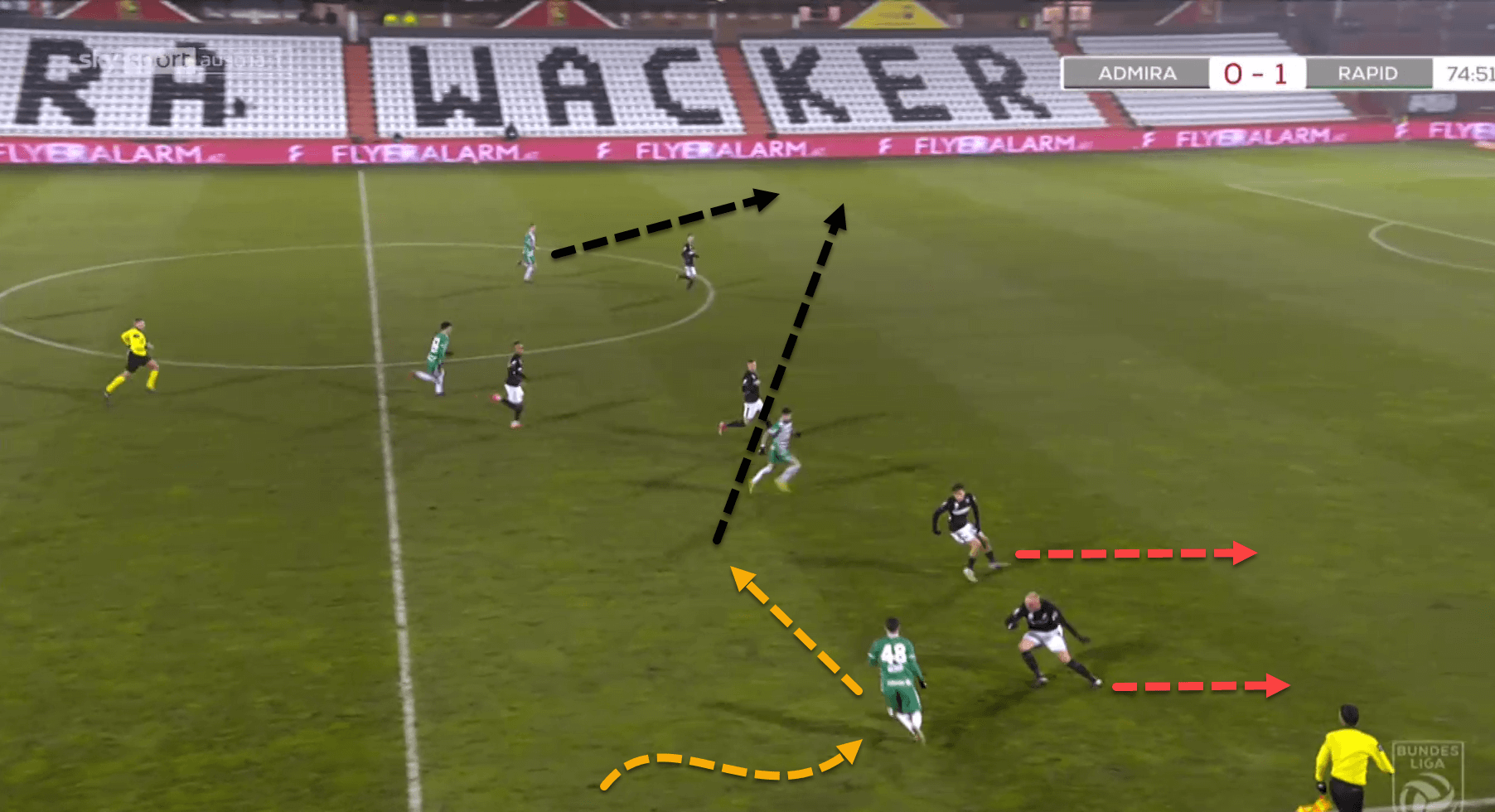 Demir’s preferred movement is from outside to inside on the right-flank, which we see in the previous image, as he can use his left-foot in the central areas providing he gets by his challengers.

In this image, the young Austrian has made a dart down the right flank with the ball at his feet. Using his quick feet and his ability to change direction in the blink of an eye, Demir drops his shoulder and dribbles on the inside, taking the opposition’s fullback and centre-back out in the mean-time.

This allows space to open up on the inside for him to dribble into, before switching the play to the left-wing. In full flow, the 17-year-old is sumptuous to watch, gliding across the pitch and going past opponents as if they are not even there.

Receiving between the lines 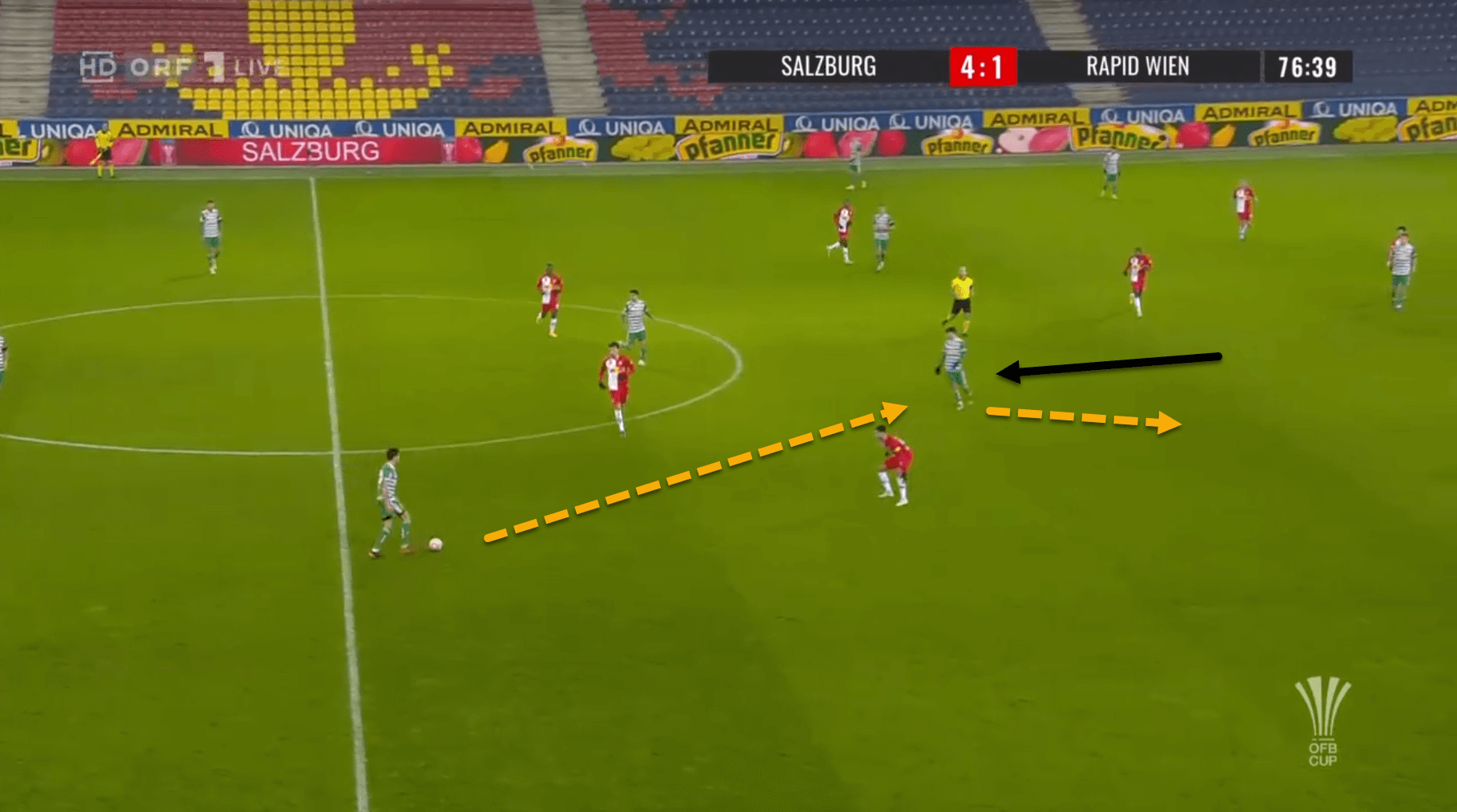 As can be seen from this image, Demir has dropped into the space between the opposition’s first line of pressure and midfield line in order to receive the ball to feet. By dropping deep, he has given his backline an extra option to break through the opponent’s forward line.

From here, the Austrian likes to receive the ball on the half-turn on his backfoot and drive forward, attacking onrushing players in 1v1 and sometimes even 2v1 duels. One of the most impressive stats from the teenager is his offensive duels per 90. Demir currently has the highest number of average offensive duels attempted per 90 in the league with 20.79 p/90.

However, whilst he likes to drop very deep at times in front of the opposition’s midfield as seen in the previous image, his preferred space to operate in is between the lines of the backline and midfield line, which allows him to put his attacking instincts to better use than in deeper areas.

Demir generally opts to receive in the right halfspace. As stated before in this scout report when looking at the youngster’s heatmap, there is quite a lot of activity on the right side and the inside-right channel in particular. 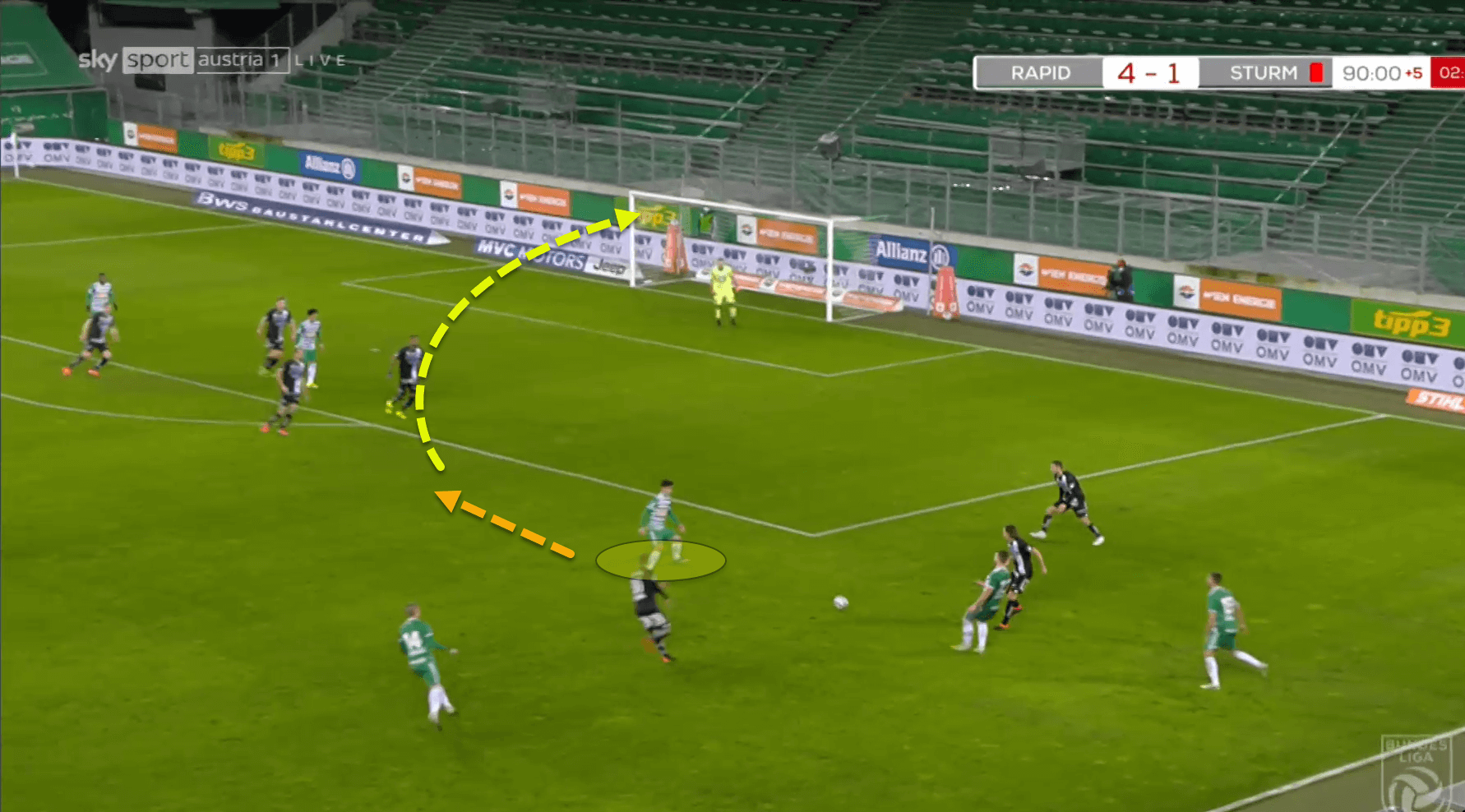 Receiving in the right half space in between the lines allows him to have space to take the ball on the half-turn – as he loves to do – and drive inside before hitting curling shots outside the box.

This only mainly applies when Demir is deployed as a number 10 or a right-sided player but since he has been used in these areas 81 percent of the time, receiving in between the lines in the right halfspace is a very important part of the 17-year-old’s overall game.

Similarly to ex-Bayern Munich legend Arjen Robben, Demir can be extremely dangerous when he cuts inside in these areas on his favourite left-foot and the Austrian has taken quite a lot of shots from this area already in the current campaign. 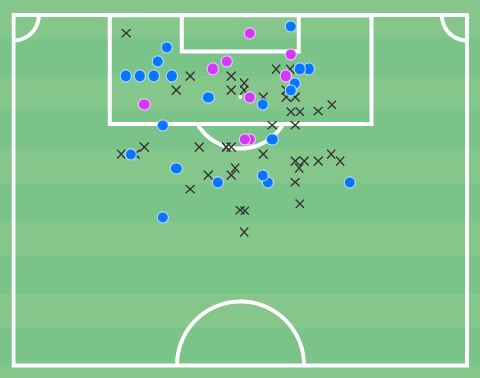 This data visual plots all of Demir’s last 75 shots on goal as of writing for Rapid Wien. As we are able to vividly see, he is averaging very similar numbers in terms of shots on goal from inside the box compared to outside the box, proving his danger when he receives the ball in between the lines.

Whilst Demir is certainly more efficient on the right-hand side, being able to cut in on his left foot, the teenager is arguably better at creating from the left-hand side. The reason for this is because he excels at getting into the left assist zone and cutting the ball backwards.

As Demir is a left footer, pulling the ball across the box is more natural for him on the left side of the pitch. 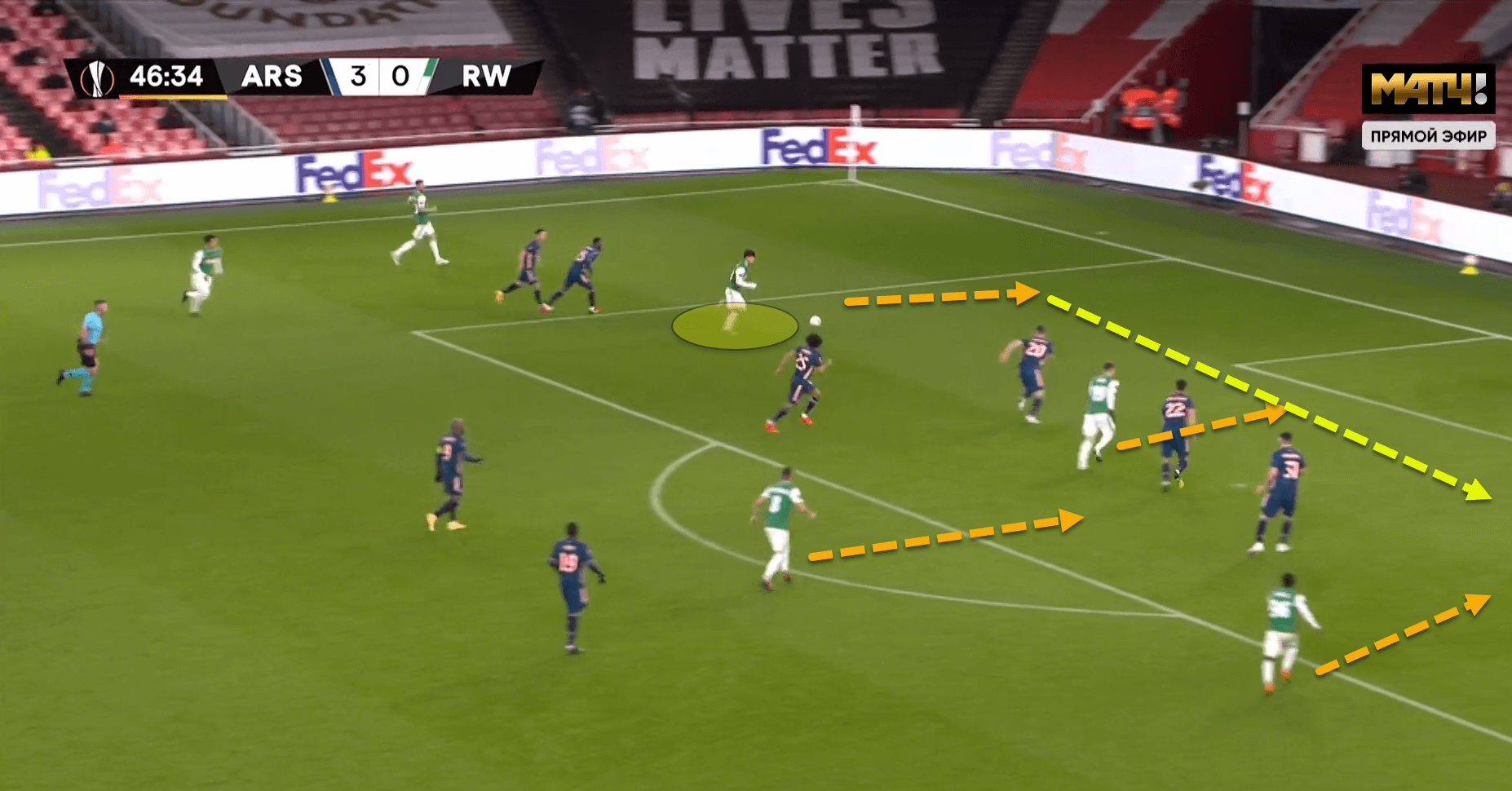 This is an example of an excellent chance created by Demir in the assist zone on the left side of the box. He receives the ball in the left half space again and drives towards the by-line. By being naturally left-footed, he is more suited to putting the ball across the box in these situations as opposed to the right side where he needs to cut back onto his stronger foot.

Playing as a number 10 also gives him the freedom to roam into these types of positions at times to create as well as drifting towards the right – his preferred side. Another example of Demir’s superb creative ability from a similar position can be seen in the next image, in which the end result was an assist for the youngster: 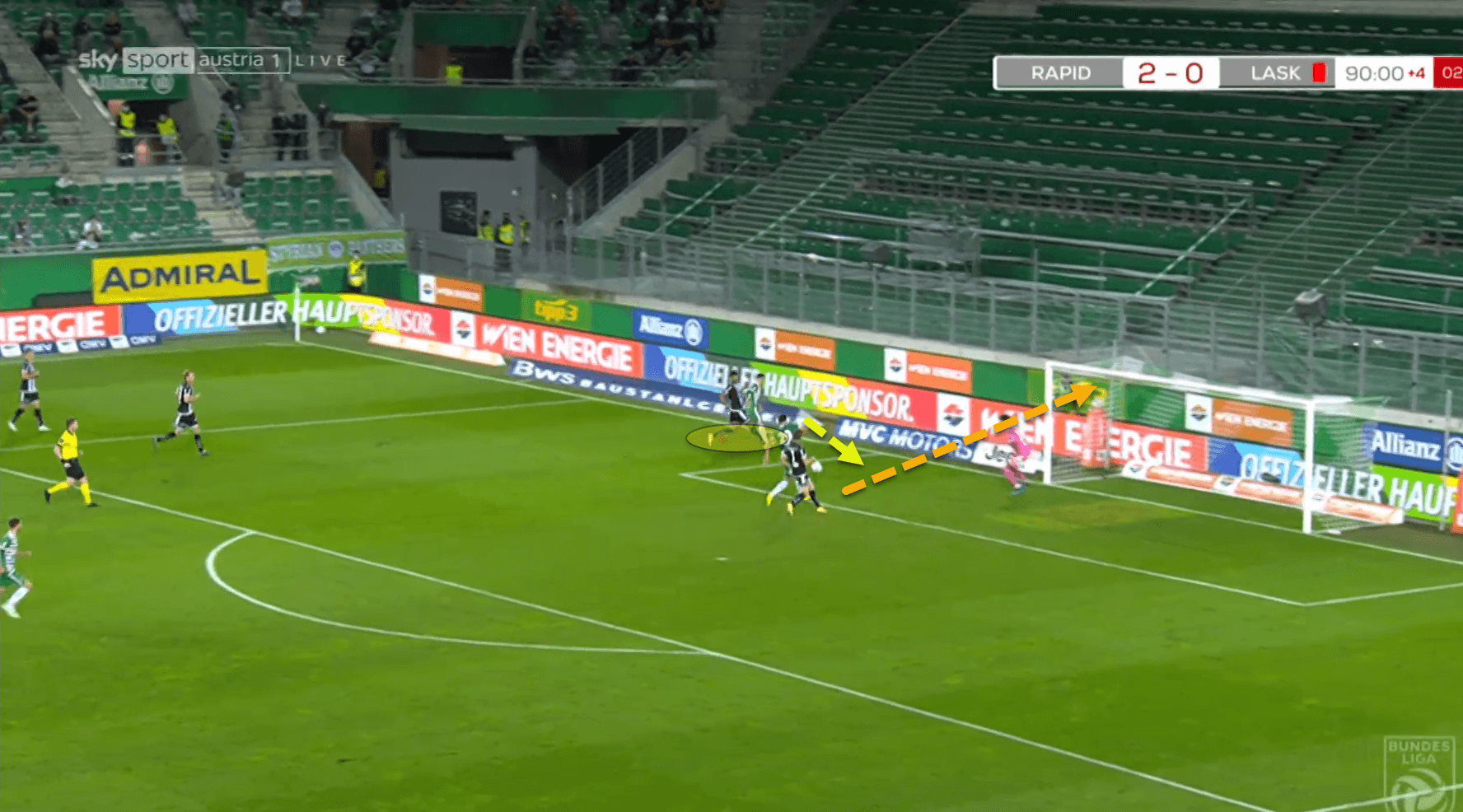 Demir is also well able to carve a defence open when the opportunity arrives as he has quite an innate ability of playing through gaps in an opposition’s defence to find running teammates. 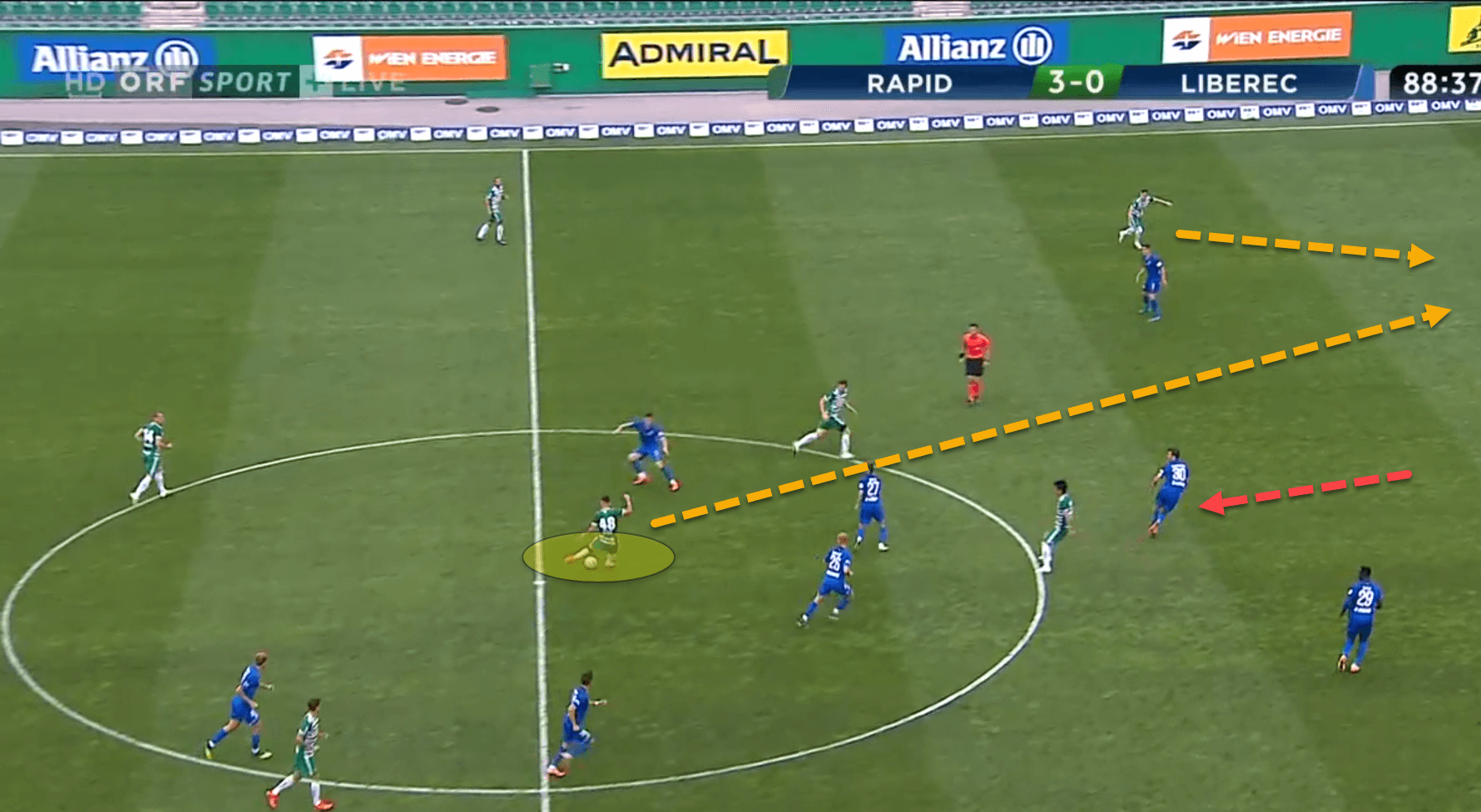 In this instance, Demir has spotted a substantial gap in between the Slovan Liberec right-back and right centre-back as the central defender was dragged out of position. He quickly turns on the ball and threads a beautiful weighted through pass, splitting the backline and sending his teammate through on goal.

The Austrian’s creative stats are very solid for a player in his age bracket. This calendar year alone, Demir has averaged 0.71 key passes per 90 in all competitions and also currently averages 0.33 expected assists (xA) per 90.

Demir’s overall play is exceptional in terms of output when his team is in possession. However, one of the areas that the teenager drastically needs to improve on is his crossing from outside.

For a natural winger and a playmaker, he is only currently averaging 1.1 crosses per game. It is not that his crossing attempts are necessarily poor in terms of technique or execution, but rather that he seems to rush his crosses in the hopes that they connect rather than look up and weigh up his options before pulling the trigger. 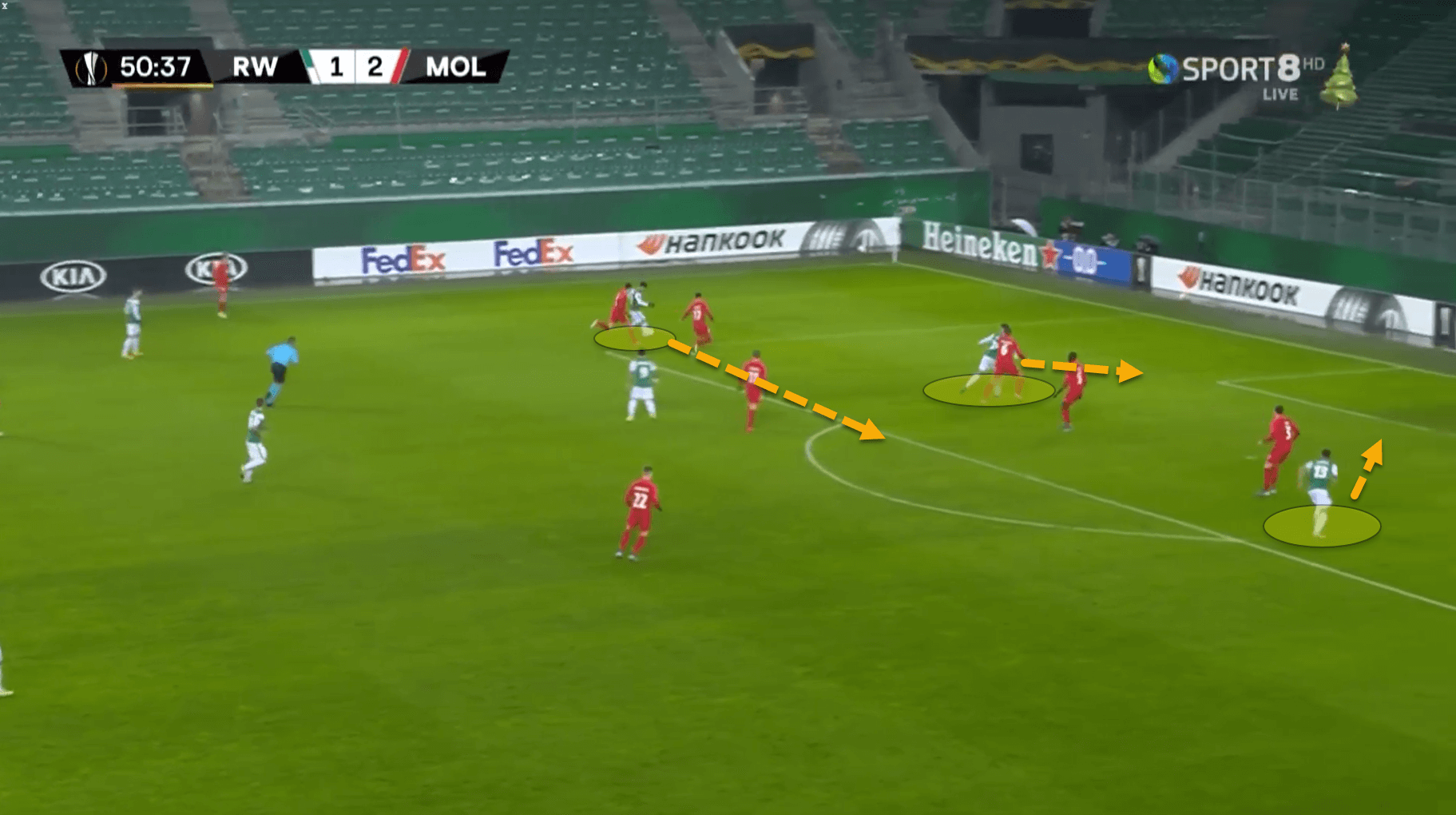 This is one example of where Demir can improve with regard to his crossing. The Austrian is under-pressure on the left flank by two opposition players. Instead of looking up to find two of his teammates making dangerous darting runs into the box, he hits the ball across the box in hopes that someone connects.

Unfortunately, due to his poor judgement of the situation, the attack breaks down as his side cede possession easily.

Having teams such as Manchester United, Real Madrid and Barcelona all hunting your signature is no joke and these top clubs clearly see the potential in Demir from his incredibly impressive displays for Rapid Wien in the Austrian Bundesliga as well as in the Europa League.

Being already labelled as ‘the Austrian Messi’ may be nerve-wracking for the youngster but if he is able to overcome the added pressure from the fact that much more eyes will be watching him closely, there is no doubt that he has potential to go on and enjoy a career at the highest level of professional club football in the future should he eventually move to one of Europe’s giants.