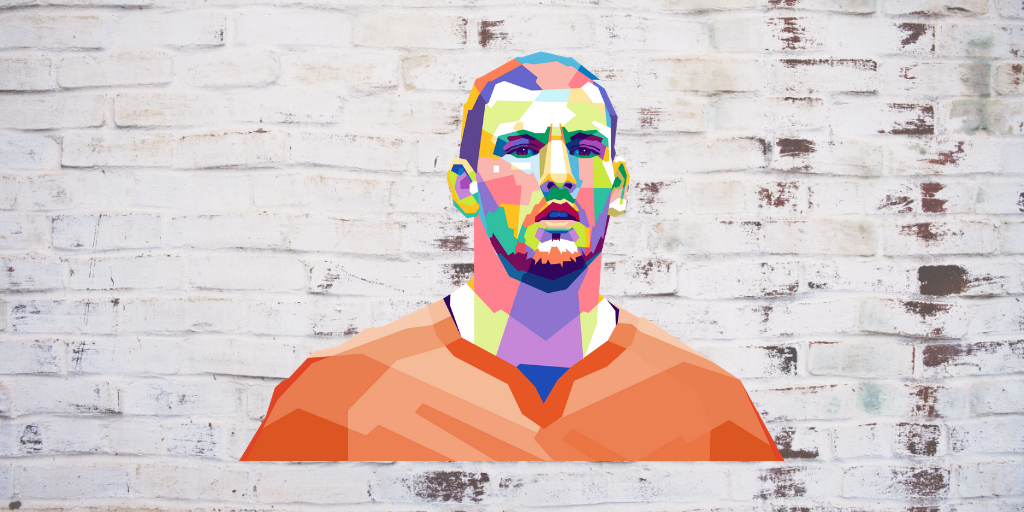 Steven Gerrard’s Rangers side has been one of the most surprising teams in Europe this season. Domestically they have pushed Celtic, making the Scottish Premiership one of the tightest title races this season. In the UEFA Europa League, the Gers managed to escape their group despite being expected to finish at the bottom of Group G. In the November 2019 edition of the TFA Magazine I looked at the influence Colombian striker Alfredo Morelos had on the Glaswegian side. In this edition, we will be looking at the contributions of Croatian left-back Borna Barisic to Gerrard’s offensive setup.

Barisic has become a fan favourite at Ibrox after finding his feet in the later stages of 2019. His unconvincing start to his Rangers career may have unnerved fans, but his recent resurgence has made him one of the first names to make Gerrard’s team sheet. The rest of this tactical analysis and scout report will highlight the attributes of Barisic’s game that make him so deadly going forward, and why he is such an important cog in the English manager’s machine. While Barisic is first-and-foremost a defender, this analysis will focus on his attacking contributions.

Steven Gerrard’s offensive success is largely influenced by his full-backs, much like how Jurgen Klopp’s Liverpool relies heavily on Andy Robertson and Trent Alexander-Arnold. Barisic and right-back James Tavernier are the highest contributors to Gerrard’s team in terms of assists. In all competitions, Barisic has 13 assists, while Tavernier has 12. Of the 52 goals Rangers have scored in the Scottish Premiership, the full-backs have assisted seven each. To get us started, let’s take a look at the left-back’s offensive positioning.

During Rangers’ attack, Barisic positions himself close to the touchline on the left side of the field. He occasionally drifts in a bit narrower when opposition defences stay compact, however, his positioning allows him plenty of space to receive the ball. In the following section of this analysis, it will become evident why this makes it so difficult to stop Barisic from putting in brilliant crosses. But in this section, we will focus on what it does to his opponent’s shape.

By taking up such a high and wide position, it provides opposition full-backs with an ultimatum. They can either step out wide to prevent passes into the player, or they can stay narrow and keep their central solidity. In many instances, this is a lose-lose battle for the defending teams. With Morelos in the middle of the field, opponents can’t afford to give the Colombian striker excess space to receive the ball centrally.

On the flip side, Barisic’s position makes it nearly impossible to step out to him if the ball is played to him. Barisic is known for delivering accurate crosses with his first touch, which we will discuss in the next part of this analysis.

We can see an example of this in Ranger’s match against Kilmarnock. As midfielder Glen Kamara dribbles towards the box, we can see Barisic arrive on the left touchline. Rangers have three players centrally waiting for the cross, forcing Kilmarnock to keep their central shape. Kamara’s presence on the ball also forces the defenders to keep their central shape to prevent him from dribbling into the box. 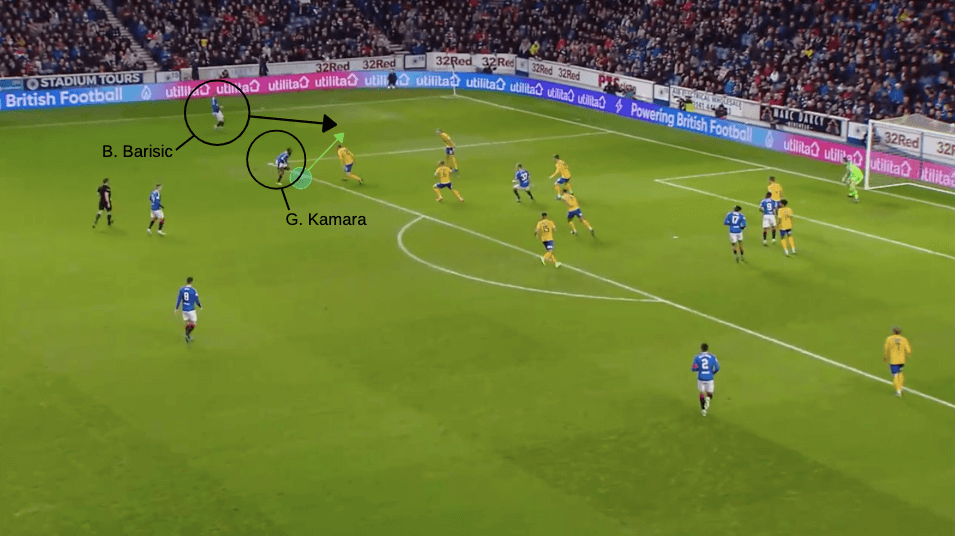 This positioning allows Barisic to receive the ball with limited pressure on him. In fact, as the ball is passed to him from Kamara, Kilmarnock’s right-back, Ross Millen, doesn’t even bother closing Barisic down. This is because it is clear that he won’t have enough time to close down the player before he puts in a cross. 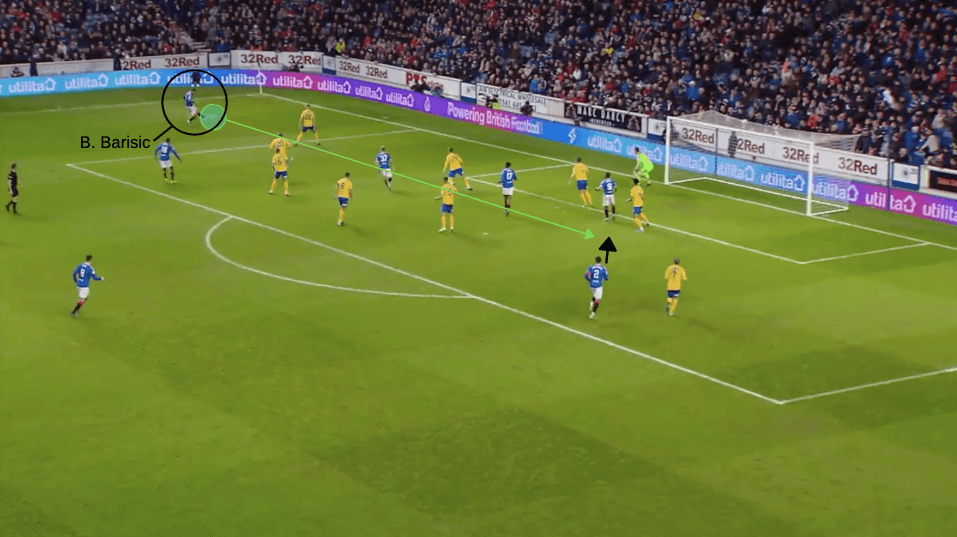 In the above example, Kamara plays the ball into space for Barisic to run onto and hit first time into the path of Tavernier who is making a late run into the box from right-back. The wide positioning of Barisic creates the space for Kamara to play the ball into. Barisic’s first-time crosses are usually a product of him gently guiding the ball back into the box. Again, we will discuss the technique of Barisic’s crosses later in this analysis. 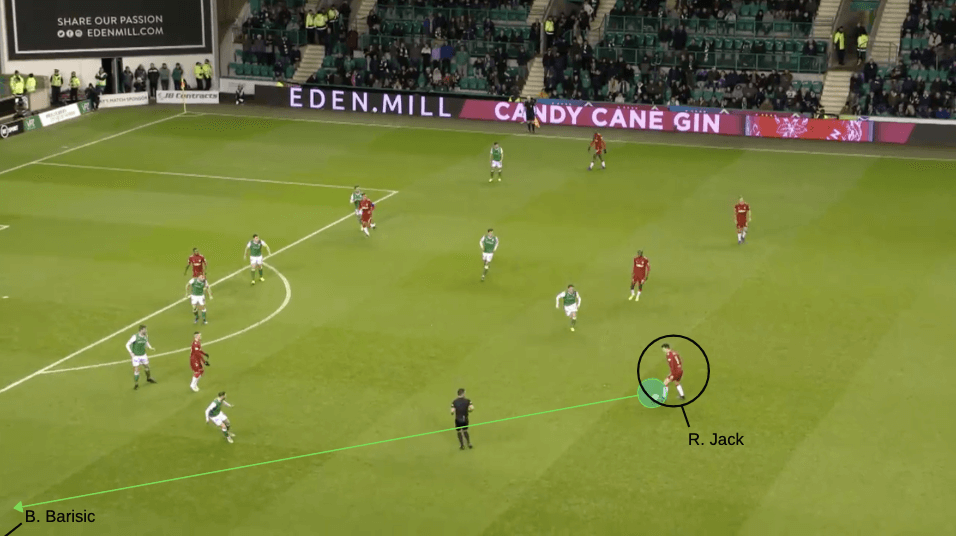 We can see another example of how wide Barisic is in his match against Hibernian. When Ryan Jack receives the ball centrally, Barisic is already high and wide on the left touchline. This is dissimilar to the position of right-back Tavenier who is much more narrow than his right-wing counterpart. We can see the position of Tavernier and right-wing Joe Aribo highlight in the image above. As the ball is played into Jack by Kamara, he can instantly open up and play the ball into space for Barisic.

In this instance, Barisic opts to take a first tough before swinging in a cross to the back stick. This is mainly because Jack delivers the ball directly into Barisic’s feet, instead of playing it into space. Despite midfielder Martin Boyle’s best efforts to close the Croatian down, Barisic delivers a brilliant cross onto the head of Tavernier which is saved by Ofir Marciano.

But what makes this passage of play so interesting from a tactical perspective is the space created after Barisic receives the ball. When the ball is at Jack’s feet, the Hibernian defensive shape is very compact. As the ball is played out to Barisic, Boyle is forced to step out to his man. Kent’s position also forces right-back Jason Naismith to step out from his defensive line. This creates a massive hole in the Hibernian backline that could easily be penetrated with a well-timed run. 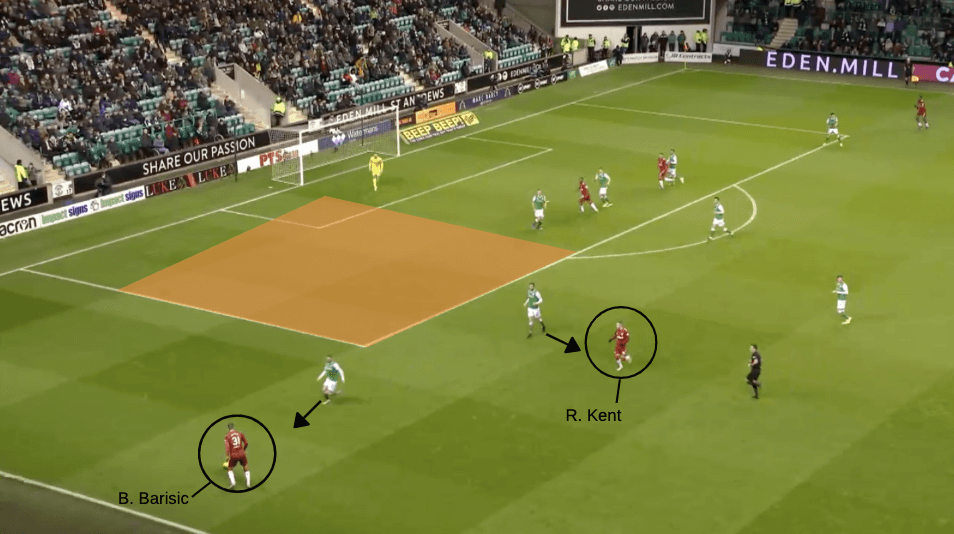 We will look at an example of how Barisic and Kent can manipulate situations like these later in the analysis. For now, however, we will move onto the section of this analysis that outlines what makes Barisic such a talented crosser of the football.

As we mentioned in the previous section, Barisic’s crossing ability is brilliant. He has, on countless occasions this season, placed the ball onto his teammate’s heads from wide positions. He rarely needs a touch to set himself before taking the cross as well.

In the following example, we can see Barisic swinging in a cross on his first touch during a match against Hearts. Again we can see Kamara in a position that forces right-back Jamie Brandon and midfielder Jamie Walker to step to him. This allows space out wide for Barisic. Instead of playing the ball into Barisic’s feet directly, Kamara plays the ball into space for the Croatian to run onto. 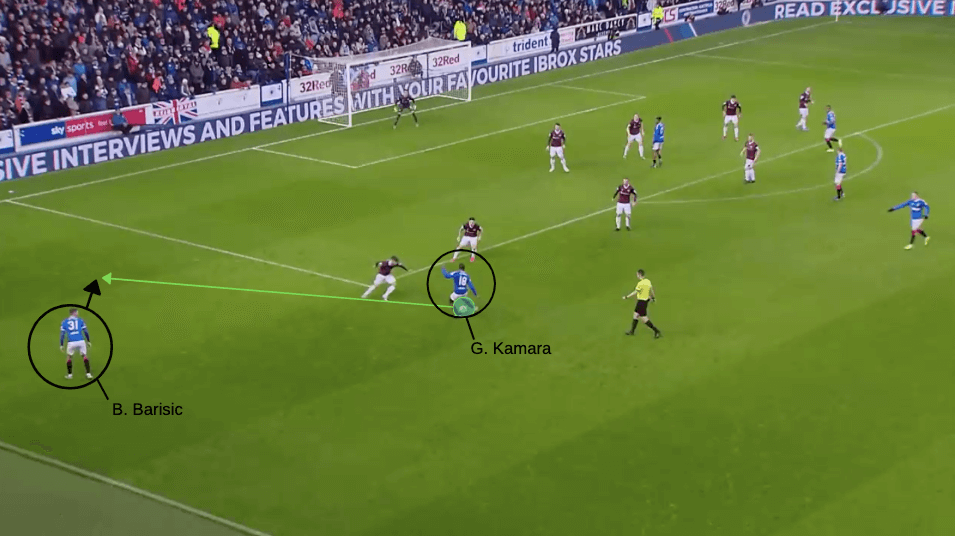 But while many full-backs or wingers would run onto that ball with the intention of driving into the free space, Barisic’s run-up suggests that he is crossing the ball first time. He takes his time with his approach to the ball and guides the cross into the back post where Morelos scores a brilliant header.

But as we can see from the next image, Barisic doesn’t take a massive swing at the ball. Because he hits the cross in on his first touch, he utilises the current momentum of the ball to create the power. This allows him to focus more on accuracy. He hits the ball with the inside of his foot, not the laces, which helps him curl the ball into the path of Morelos. 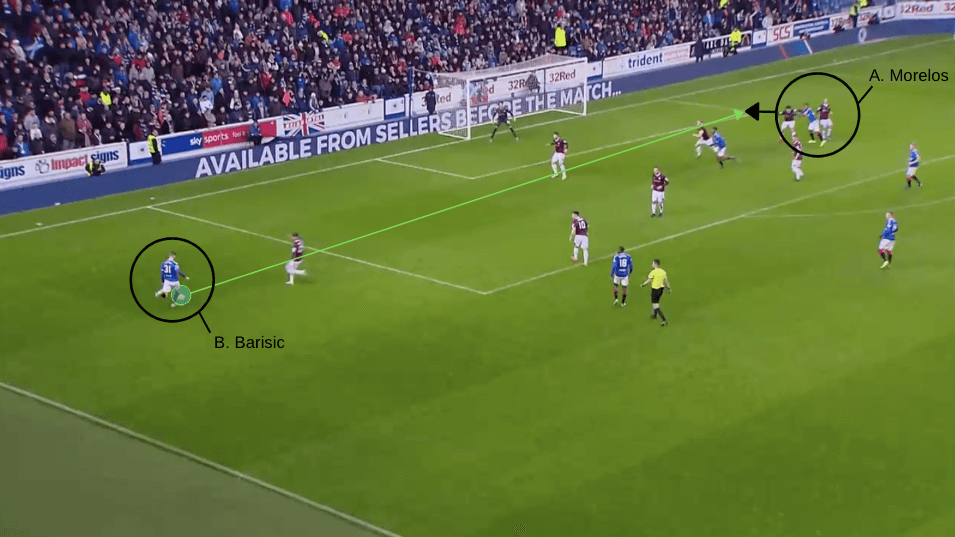 We can see another example of just how little power Barisic needs to put on his crosses by hitting them on his first touch. In a match against Feyenoord Barisic is involved in a carbon copy goal from the one above. Kamara is in possession centrally and plays a ball into the path of Barisic. Instead of walking you through the whole play again using images, take a look at the instant before the left-back makes contact with the ball. 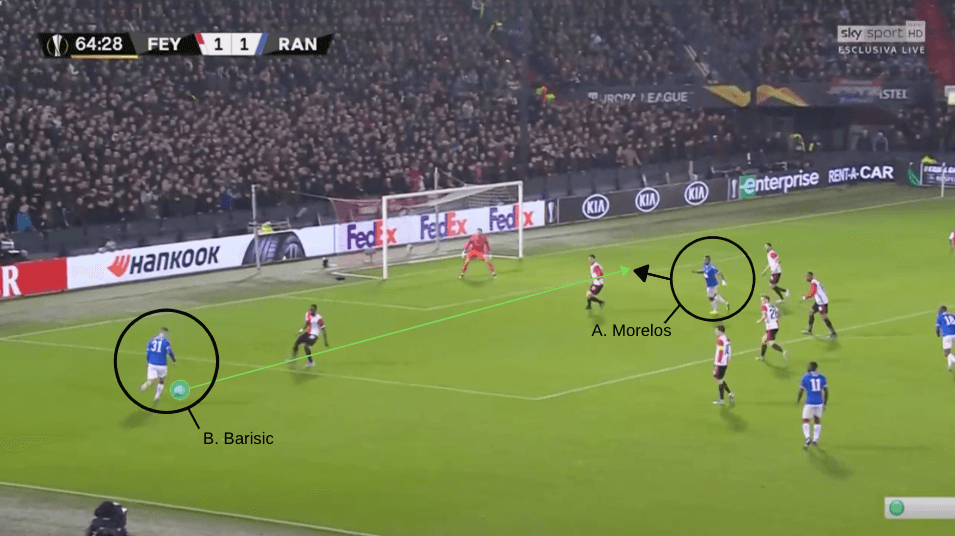 The images show how little Barisic pulls his leg back before striking the ball. Instead of leaning back to get under the ball, he gets his body over the ball and guides the ball with his instep. The technique sacrifices power but increases accuracy. By hitting the ball first time, Barisic can add power without compromising the accuracy of his passes.

Earlier in the analysis, we mentioned how Barisic’s helped create space centrally for players like Morelos and Kent to operate in. Barisic’s willingness to get forward has a positive impact on Kent during games. The English winger is brilliant with his feet and can be quite effective in tight areas. He also has the ability to score goals. Despite playing on the wing, Kent can also be found drifting into central areas. This is possible because of Barisic, who pushes up into high and wide areas to create width.

In the following example, we can see Barisic receive a ball from the midfield. His wide position pulls out Kilmarnock’s right-back. With Kent in a central area, he is able to make a penetrating run into the space left occupied after Millen steps to close down Barisic. Barisic passes the ball into the path of Kent who is able to drive into the box, despite being well defended by Iain Wilson. 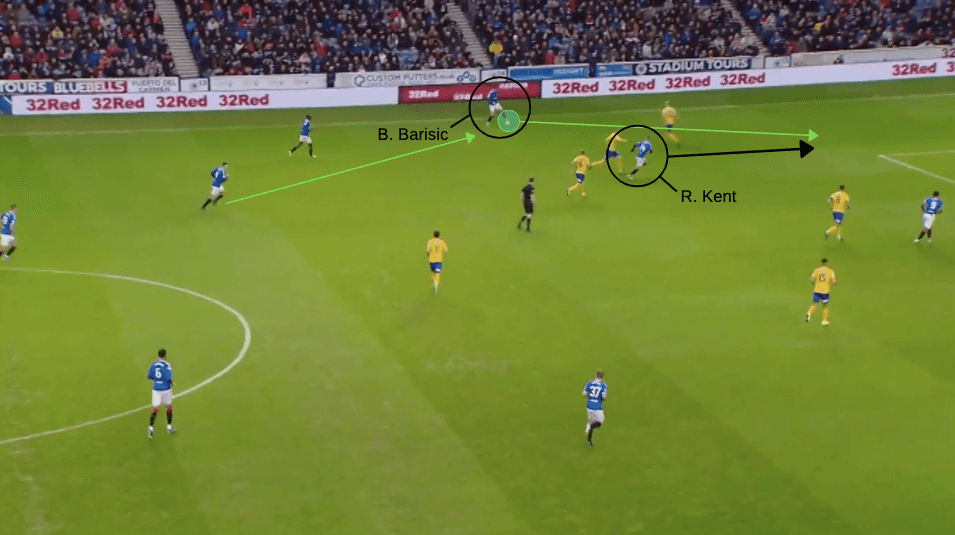 In the next example, we will see how Barisic links up with Kent from narrower areas. When Barisic dribbles into the box, Kent can be seen positioned centrally at the top of the box. As the defenders move deeper, Kent drops off to receive the ball from his teammate. Barisic plays a ball into Kent’s path who takes a first-time shot that just misses the target. 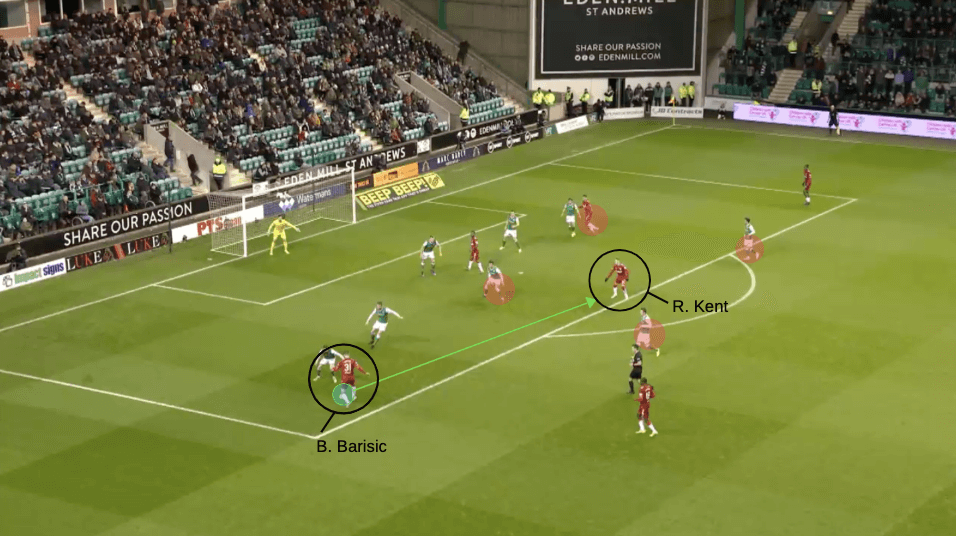 If you want proof that this isn’t just a one-off, take a look at Kent’s goal in the most recent Old Firm. Barisic dribbles in from a wide area, then as Kent opens up to receive the ball, the left-back plays a brilliant ball into his path. Kent doesn’t miss this time and smashes the ball off the inside of the post to open the scoring. Rangers went on to beat Celtic after Barisic assisted Rangers’ second goal as well.

Without a full-back who is so effective going forward, Kent wouldn’t be as effective in central areas. Barisic’s positioning during attacks forces defences to either give him space or sacrifice central solidity. This provides attackers like Morelos and Kent the space needed to torment opposition defenders.

Barisic has been vital to Gerrard’s tactics this season. The Croatian hasn’t just impressed Rangers fans though. Serie A sides such as AC Roma and AC Milan are monitoring the full-back. If the Italian giants do manage to snag Barisic in January, however, it would be a huge loss to Gerrard. Whatever fee he goes for will almost certainly eclipse that of the £2.2 million they paid NK Osijek for him back in August 2018.

But while Barisic has proven himself as an invaluable member to Gerrard’s lineup, Graeme Murty’s academy team are pumping out quality youngsters at an impressive rate. Right-back Nathan Patterson is being lauded as the long-term replacement for James Tavernier while James Maxwell has also been identified as a long-term left-back for the club.

With both these youth being just 18 years of age, Rangers could be in a position to let Barisic go for the right price. But as this analysis has shown, his quality going forward will be difficult for the youngsters to consistently replicate. His accurate delivery into the box has contributed to an incredible number of goals this season. Should the money be waved in Gerrard’s face, he will certainly think twice before accepting an offer. Especially with the club’s 55th league title win looking like a serious possibility for this season.