Mariona Caldentey is one of Barcelona Femini’s best talents who has already shown her worth during the past five/six years at the highest level. Such excellent performances have helped her to join up with the Spanish national team since 2017 and be a pivotal player in their squad too. Being a 25-year-old is a huge advantage for this player who has already played in almost all major tournaments such as the UEFA Women’s Champions League, the Primera División with Barcelona, and the 2017 UEFA Women’s EURO and the 2019 FIFA Women’s World Cup with her national team.

Caldentey made a significant contribution in most of these tournaments and even during the events where she didn’t shine or where her team was knocked out early, she got the experience needed for her development and that will serve for improving her psychological strength and for becoming ready to provide a bigger contribution during the upcoming big events.

In this regard, Spain counts on a plethora of excellent players to reach an advanced round in the UEFA Women’s Euro 2022 and then in the FIFA World Cup 2023. This generation of excellent players includes Irene Paredes, Mapi León, Andrea Pereira, Olga Carmona, Aitana Bonmatí, Ballon d’Or winner Alexia Putellas, Marta Cardona, Jennifer Hermoso, Caldentey, as well as other talented and promising players. Therefore, with such powerful names, we expect Spain to reach an advanced spot in these upcoming events and Caldentey’s role will most probably be crucial.

In this tactical analysis scout report, we will focus mainly on Caldentey’s key skills and abilities that earned her a regular spot in an already powerful Barcelona Femini side and in the Spanish national team. The analysis will be carried out while providing some examples of what she was able to do on the pitch during this 2021/2022 season so far.

Caldentey is a player who’s mastered different positions and roles, which makes her a special player nowadays. She is mainly a left midfielder who got used to playing as a left-winger at Barcelona as well. On certain occasions, she also plays as a right midfielder with almost the same efficiency. Being an intelligent but especially a quick player helps her a lot when receiving the ball between the lines.

That’s why she is usually instructed to move regularly without the ball inside the final third in order to receive passes in those spots and try to penetrate further using her speed and physical strength. Additionally, Caldentey crosses regularly when she is employed as a right midfielder while exploiting the fact that the right-wing allows her to cross the ball easily and naturally.

When it comes to her goal-scoring contribution, Caldentey has a powerful shooting ability. She often shoots from distance and succeeds in scoring. This additional weapon is usually used by her managers who often instruct her to shoot whenever the situation is adequate. She has already scored 33 goals in 90 matches since her debut at Barcelona in 2014.

Moreover, she improved her passing a lot throughout the last few seasons and her playmaking abilities have developed significantly. That’s why she is relied on to provide key passes and assists from midfield, especially when inside the final third for her teammates. 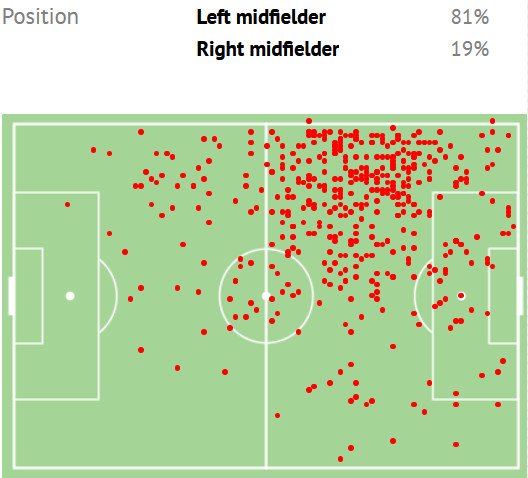 In terms of playmaking, Caldentey is a very special player who can do almost everything with the ball and can cause a lot of trouble to her markers since her movements are unpredictable. We can find her in every spot of the opponent’s half and she can manage to do well in most situations. This is mainly linked to her experience in holding various positions on the pitch. Therefore, Caldentey is an extremely important player for Barcelona even though the spotlight is not always put on her given that other Barcelona players’ impacts are more apparent.

Nevertheless, Caldentey’s role is being noticed more and more as she is getting even more confidence in her abilities year after year. For instance, she was able to score 13 goals in 19 matches this season while providing nine assists for her teammates. Her most recent assist was against Real Madrid Women in El Clásico to provide the pass for the third Barcelona goal that was scored by Lieke Martens.

Caldentey spotted her teammate’s movement behind the opposing defensive line and decided to give her an accurate through pass that went through numerous Real Madrid players and reached Martens. Then, the latter found herself in a suitable shooting position and without much disturbance from Real Madrid defenders who weren’t able to catch her before scoring.

Such intelligent passes constitute one of Caldentey’s individual attacking weapons that can benefit any team.

Apart from providing assists, Caldentey’s passes are usually accurate and precise. She has great tactical awareness and excellent control of her passing abilities that help her to do whatever she wants with the ball, even when being pressed and without getting confused. As an example, in this action, you can see how she was facing three Arsenal players who were standing just in front of her to prevent her from advancing or making a forward pass. Yet, she was able to provide a cross towards the feet of Hermoso in a way that looked simple to the viewers but, at the same time, it needed much concentration and accuracy. 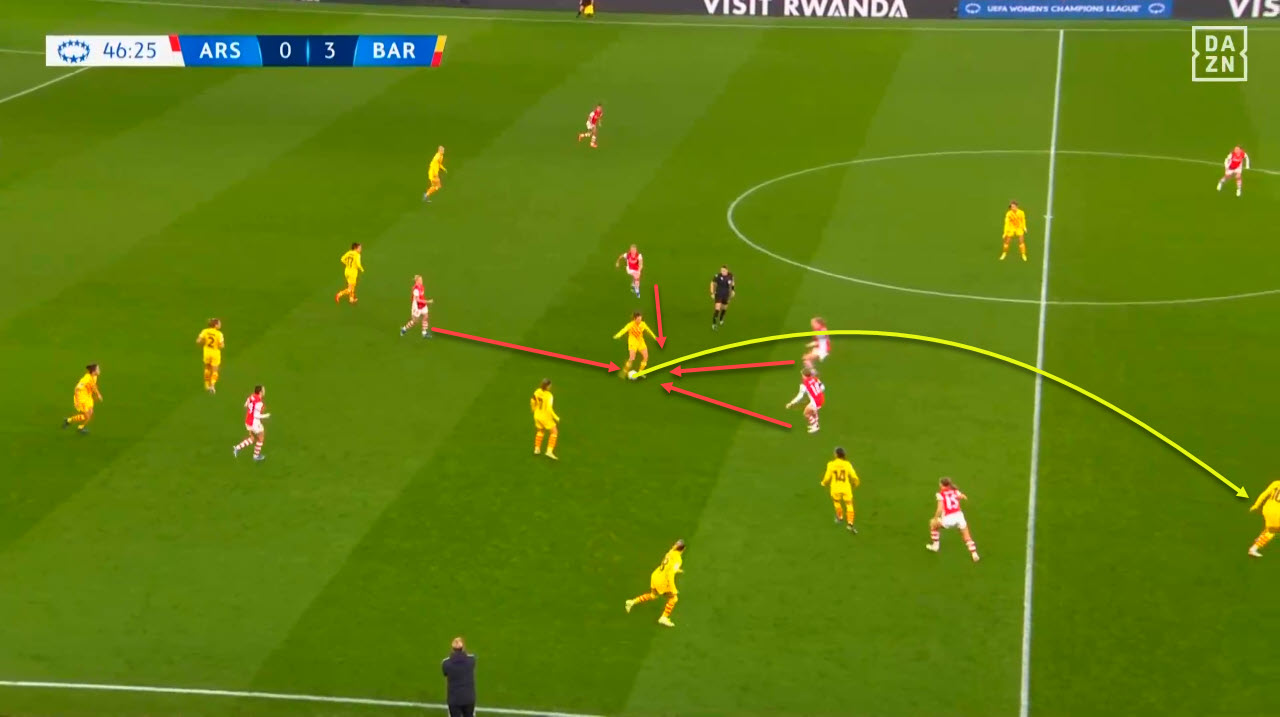 Such actions break defensive lines and create numerical superiority for the attacking team just like it happened in these previous two examples. We saw how Caldentey is excellent in this regard and with timing her passes well.

Another spot where Caldentey can be very dangerous is on the left-wing where she has already played a lot throughout the past seasons. Caldentey often provides well-timed and accurate crosses when cutting inside from the wing, especially when she notes that there is no clear path for shooting. She was able to create numerous goal-scoring chances through her crosses and that’s another key way with which a manager can use Caldentey in attack. 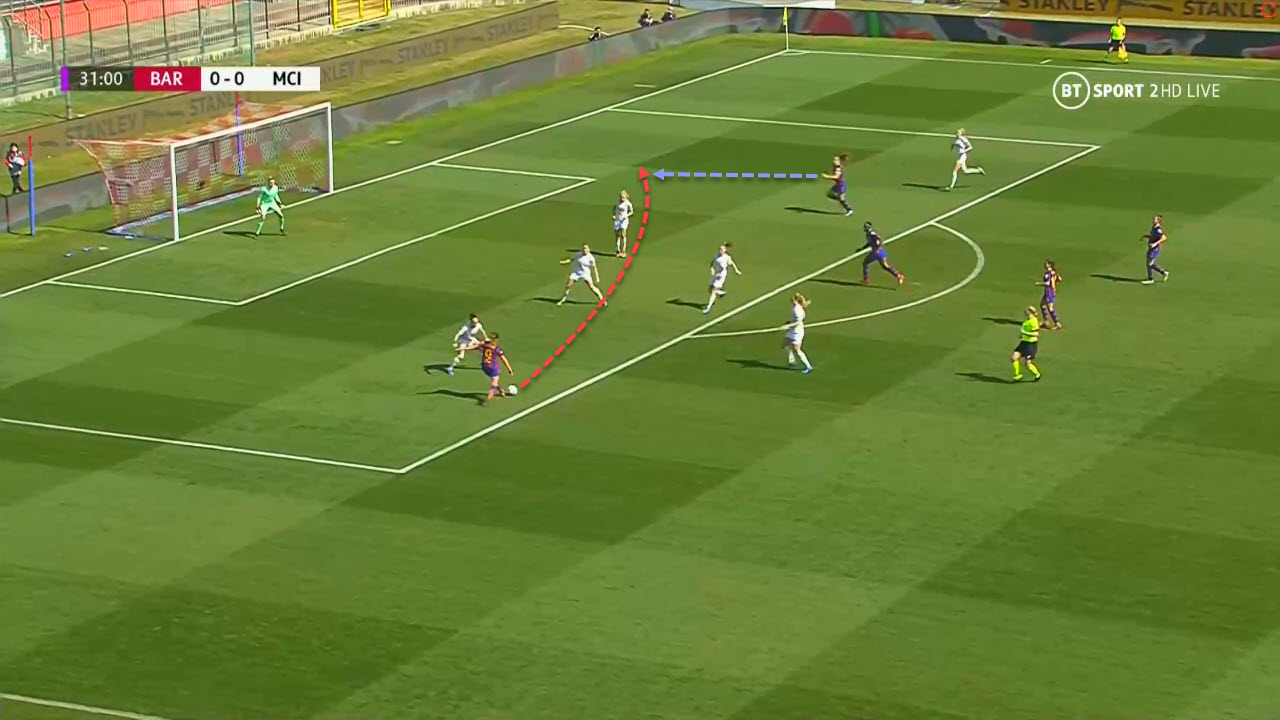 This picture shows an example of chance created against Manchester City in a UWCL match and it proves the idea explained above concerning Caldentey’s ability to choose the right timing and accuracy for her crosses in order for the ball to meet her teammates in the desired place and time.

Caldentey has become an impressive goal scorer for Barcelona and the Spanish national team despite not being a striker. Her average scoring rate is increasing year after year and whenever she gets more playing time, she proves that deciding to start her can only be fruitful. Caldentey acts like a striker whenever she finds herself in a counter-attacking situation and she exploits such chances extremely well using her pace and physical strength while asking for the ball in key areas. As you can see below, as soon as she noticed that Olympique Lyonnais’ defensive block is very high and that she can create something in such a situation, she started running and asking for the ball behind the defensive line. When she got the ball, she found herself in front of the goalkeeper and scored it without complicating things. 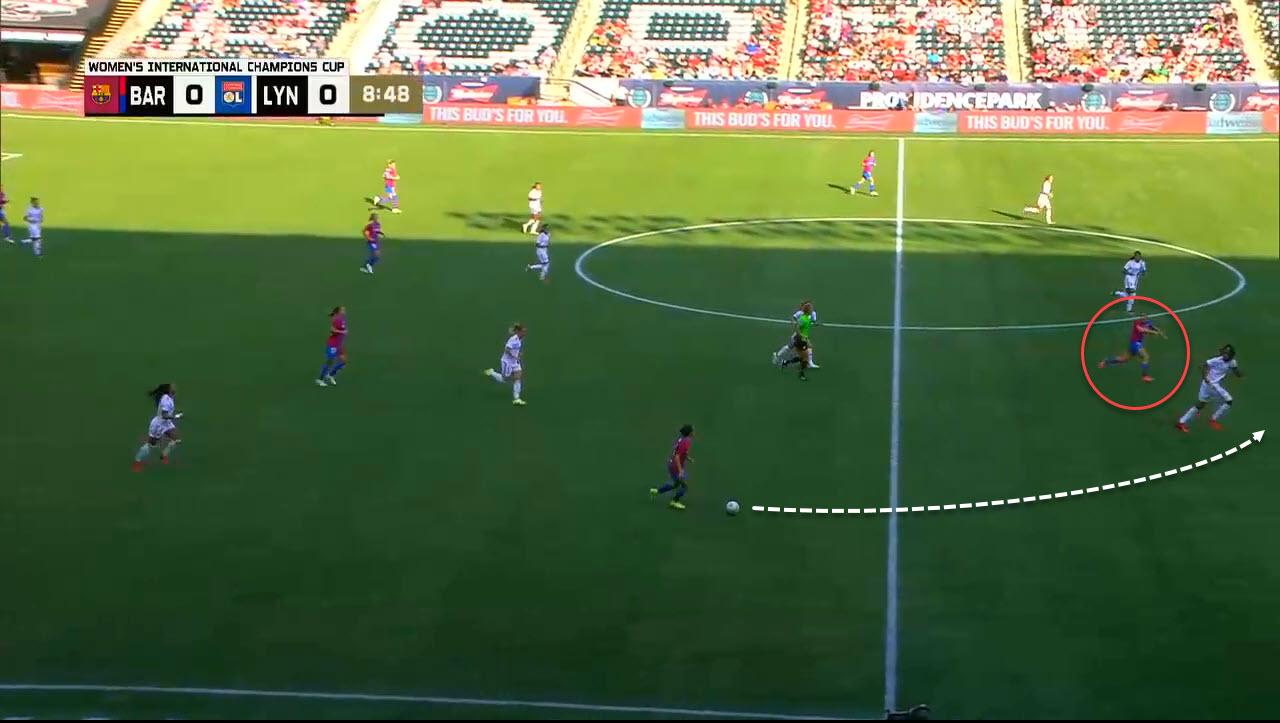 Such movements without the ball from players coming from midfield can always result in goals or dangerous opportunities since the defence cannot always expect this level of penetration from non-strikers. Moreover, Caldentey can also score goals when playing as a right midfielder. Her determined runs can usually create problems for any defence, especially when she is surrounded by players who understand her intentions quickly and with whom she can exchange the ball fastly. In the following goal action, Caldentey initiated the attack from midfield as you can see below. 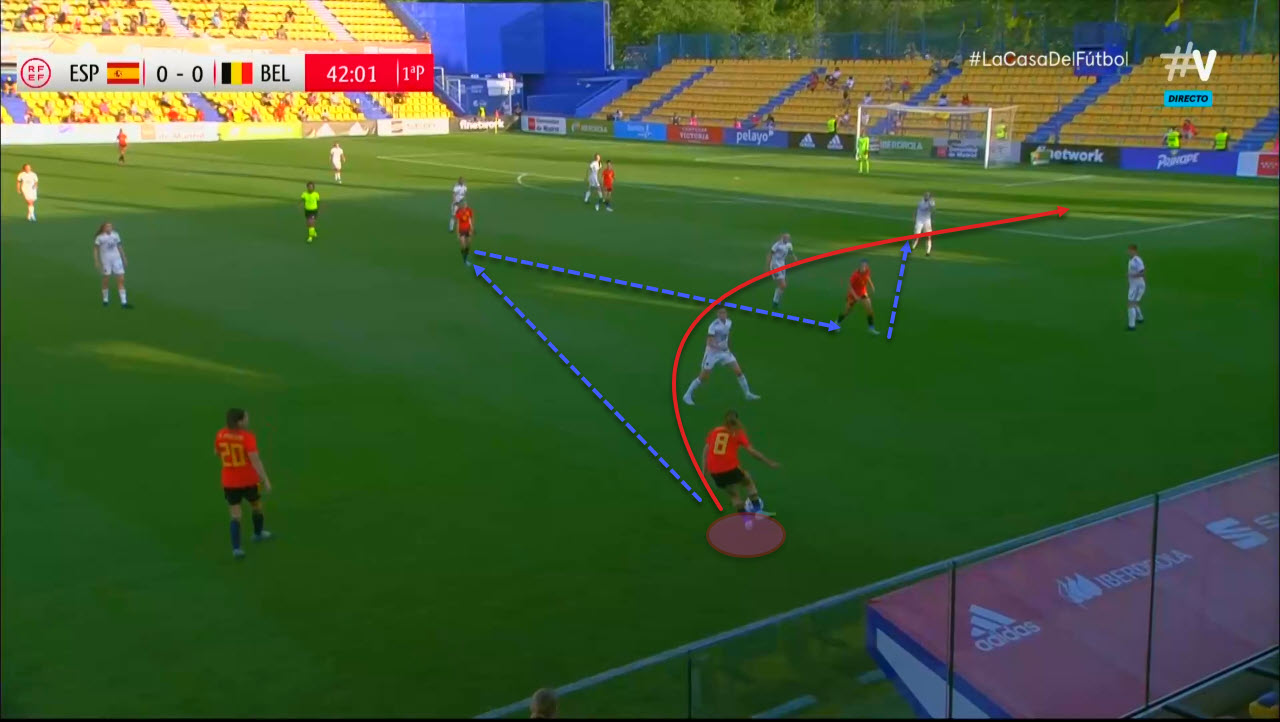 Then, she passed the ball to her teammate and started running towards the penalty area as the red arrow shows. In the meantime, she received the ball back from her teammate and continued her run until reaching the box and chipping the ball over the goalkeeper. 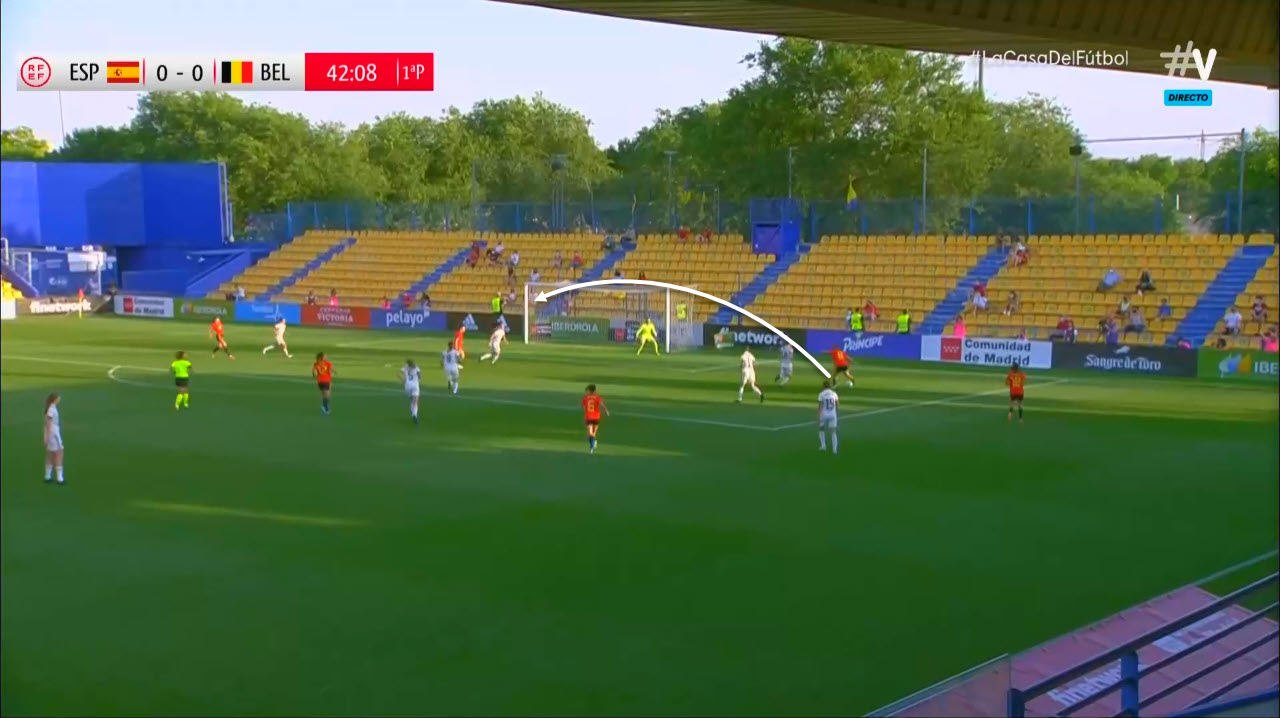 Caldentey is an exceptional player who is useful in different aspects of the game, including playmaking, goalscoring, pressing, penalty shooting and movement without the ball. She provides a plethora of attacking solutions for any team and can create a lot of trouble for her opponents. If she keeps developing and putting on excellent performances regularly, Caldentey has got all it takes to become one of the best in the world of women’s football.