Last summer Mohammed Mady Camara of Olympiakos was being linked with a host of EPL clubs. Instead of heading the pastures new, the Guinean international remained in Greece and was an integral part of the side’s championship win. At 23 years old, many consider Camara ready to take the next step in his career. With clubs reportedly from England as well as Serie A and the Bundesliga circling, it is no surprise that he feels it is time to leave.

The 23-year-old appears to have what it takes to rise to a new challenge, but it is unlikely that Olympiakos will let him go cheaply considering he is still under contract till 2023. Furthermore, he has added more goals to his game this season with 6, exceeding his xG of 3.49. Therefore, this scout report will look to analyse the players game and see if Camara is worth the money for teams in the top European leagues.

This tactical analysis will look at the key strengths of the Guineans game, as well as an analysis of how he fits into the tactics deployed by the Greek champions in their pressing game.

Despite only having two assists this season, Camara is an excellent passer who can progress the play for his side. For players in the same position, he sat second overall for average passes per 90 with 54.56 at an impressive 85.47% accuracy. Furthermore, Camara sits second for his position in terms of progressive passes with an average of 8.88 per 90. His average progression in metres is an impressive 258.75. 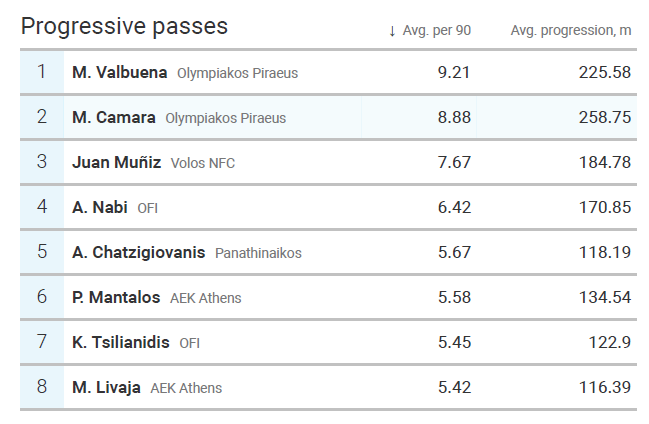 These numbers certainly jump off the page and give an impressive image of the Guinean midfielder. Considering he receives the ball on average just under 43 times per match, it&#39;s clear that Olympiakos like to get Camara involved in the play. Again, this puts him second overall for his position and in terms of his team, he received the ball more than the creative Mathieu Valbuena.

Looking outside of his position and at the league-wide data, the passing of Camara is still impressive. He sits second overall for passes to the final third with an average of 10.43 at an accuracy of 75%. When we look at the breakdown of passing for Camara, we can appreciate even more his ability to progress the side with balls to the final third and just in terms of distance covered. As we see from the below graphic, Camara operates all over the pitch in order to create and progress the ball. We will focus on the running progression in the next section, but just focusing on the passing we see how much space he covers in order to facilitate.

When we then break down the numbers and the accuracy percentage, we see that Camara’s accuracy increases the further he passes the ball. While it is important to consider that with more passes being made in the 0-20m mark there is a greater chance of reducing accuracy, the fact that of his 40m+ passes he has an 88.5% accuracy should not be overlooked. 46 accurate passes out of 52 is very impressive and would certainly help plenty of European sides in the top flights looking for a player who can help transition from defence to attack.

Progressing the play through running

Not only is Camara a keen passer, he is also a strong runner with the football. He sits 19th overall for his position at an average of 1.87 progressive runs per 90. While this may seem low, he is averaging 67.32 of progression.

In the game against PAOK after the league restarted, Camara scored a goal which highlighted his ability to run with the ball, especially under pressure. We see below him picking the ball up deep in the opposition half, with plenty to do still in order to get a shot on goal. Camara has to beat the man in front of him while also having more defenders getting back at pace. 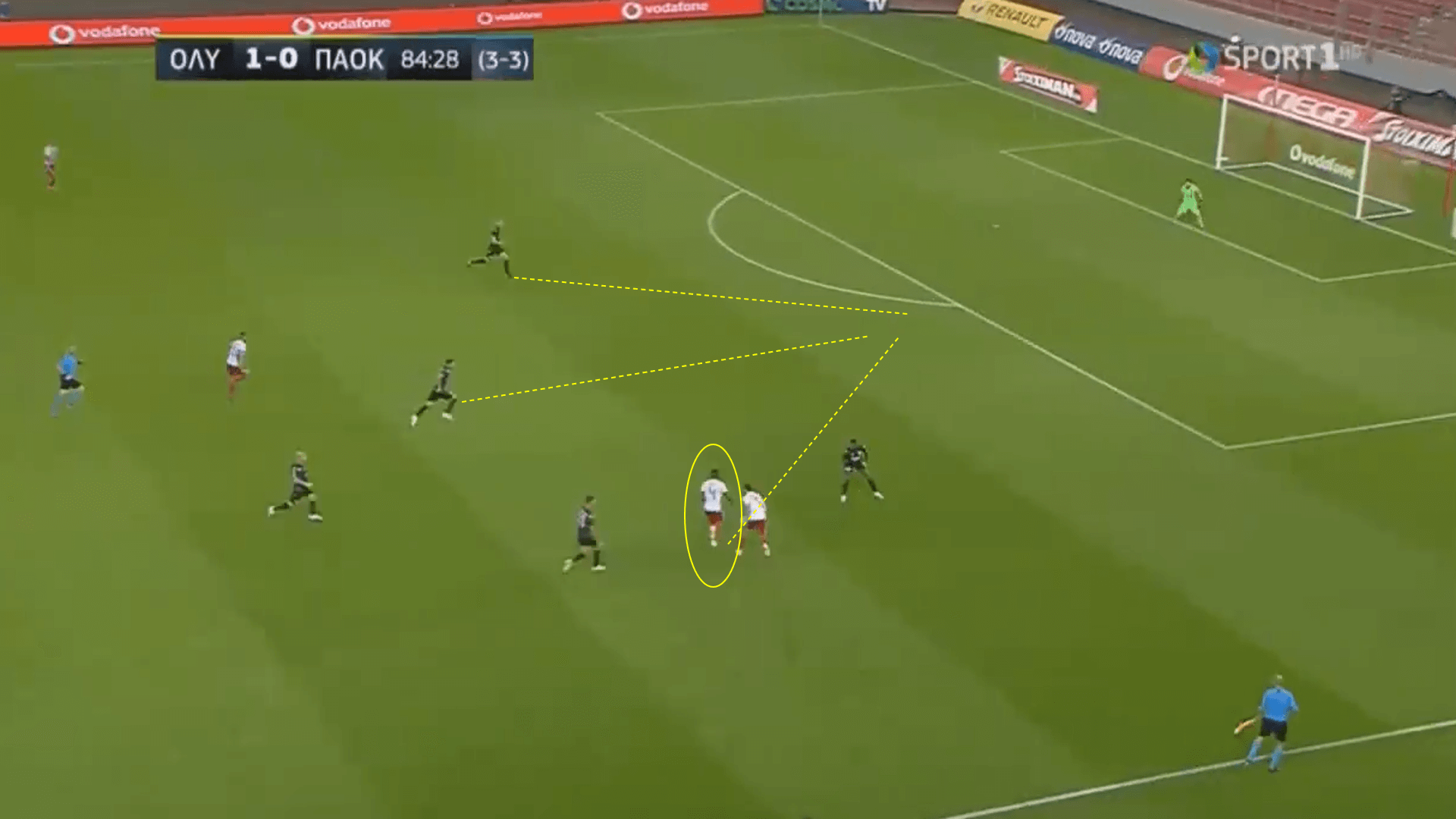 After beating the first man, we see that the other defenders have been able to get back and put pressure on Camara. Thankfully for the midfielder, he has the balance and strength to hold off the defender closest to him and keep control of the ball before finding a finish. 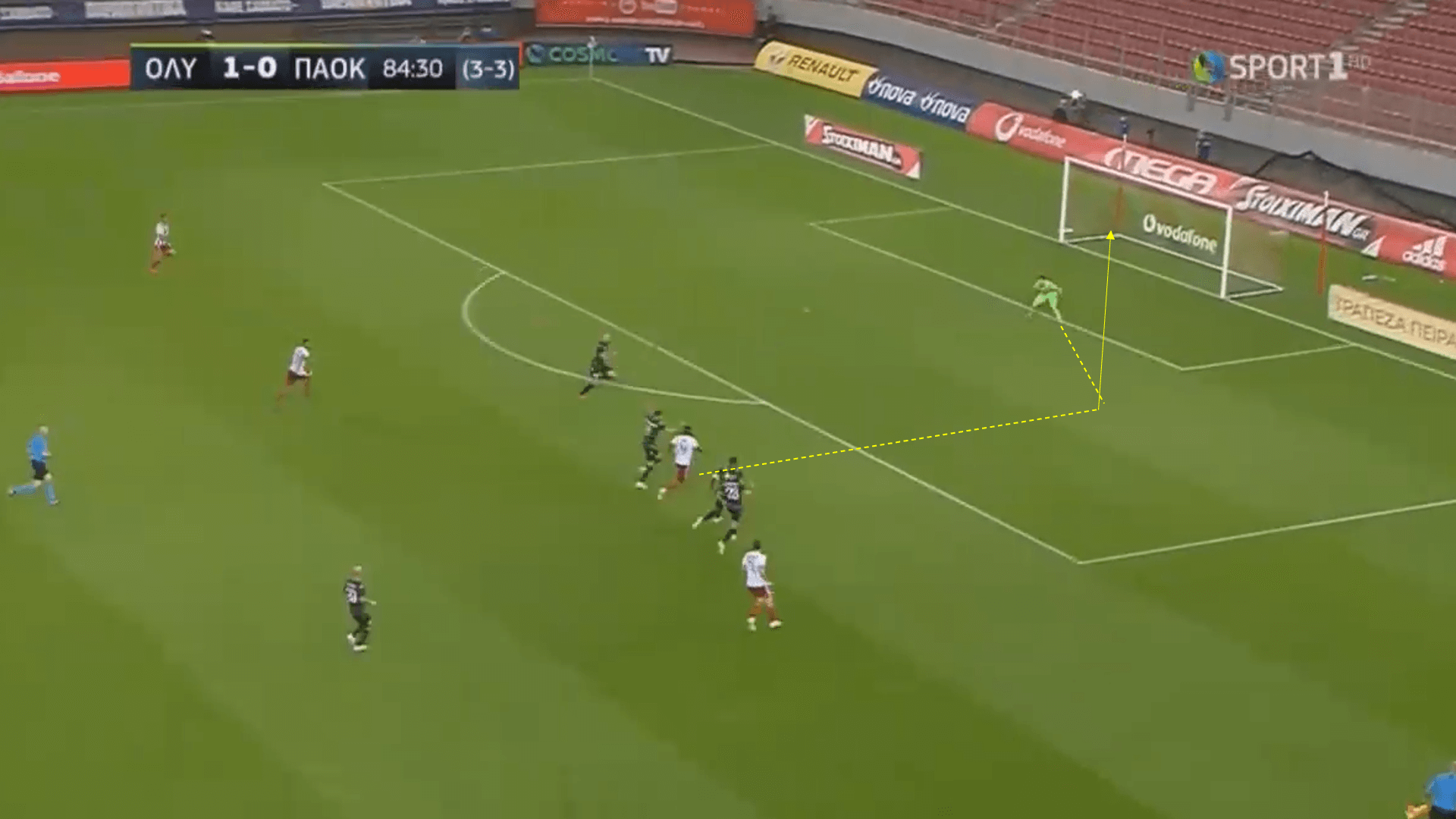 It is also important to note the timing of this goal. Deep into the match, Camara is still able to produce such explosive running. This shows his fitness to keep performing late into matches. Moving to a league like the EPL, which is considered one of the more physical in the world, should not phase Camara. He has shown that he can deal with physicality well. Teams looking for a midfielder who can progress the ball with his passing and his running should certainly be looking at Camara as a transfer target.

As a defender, Camara is equally as impressive and would fit into any team looking to emphasise pressing high up the pitch. Camara sits third of those in his position for counter-pressing recoveries per 90 with 4.12. Furthermore, he averages 1.66 recoveries in the final third per 90, putting him solidly in the top 10.

This ability to apply pressure has helped Olympiakos to score goals this season and really dominate the opposition. Against Aris, we see that despite being a central midfielder, Camara is leading the press deep into the opposition half. He is working well within the tactical system as we see his teammates are supporting him in blocking off the passes. 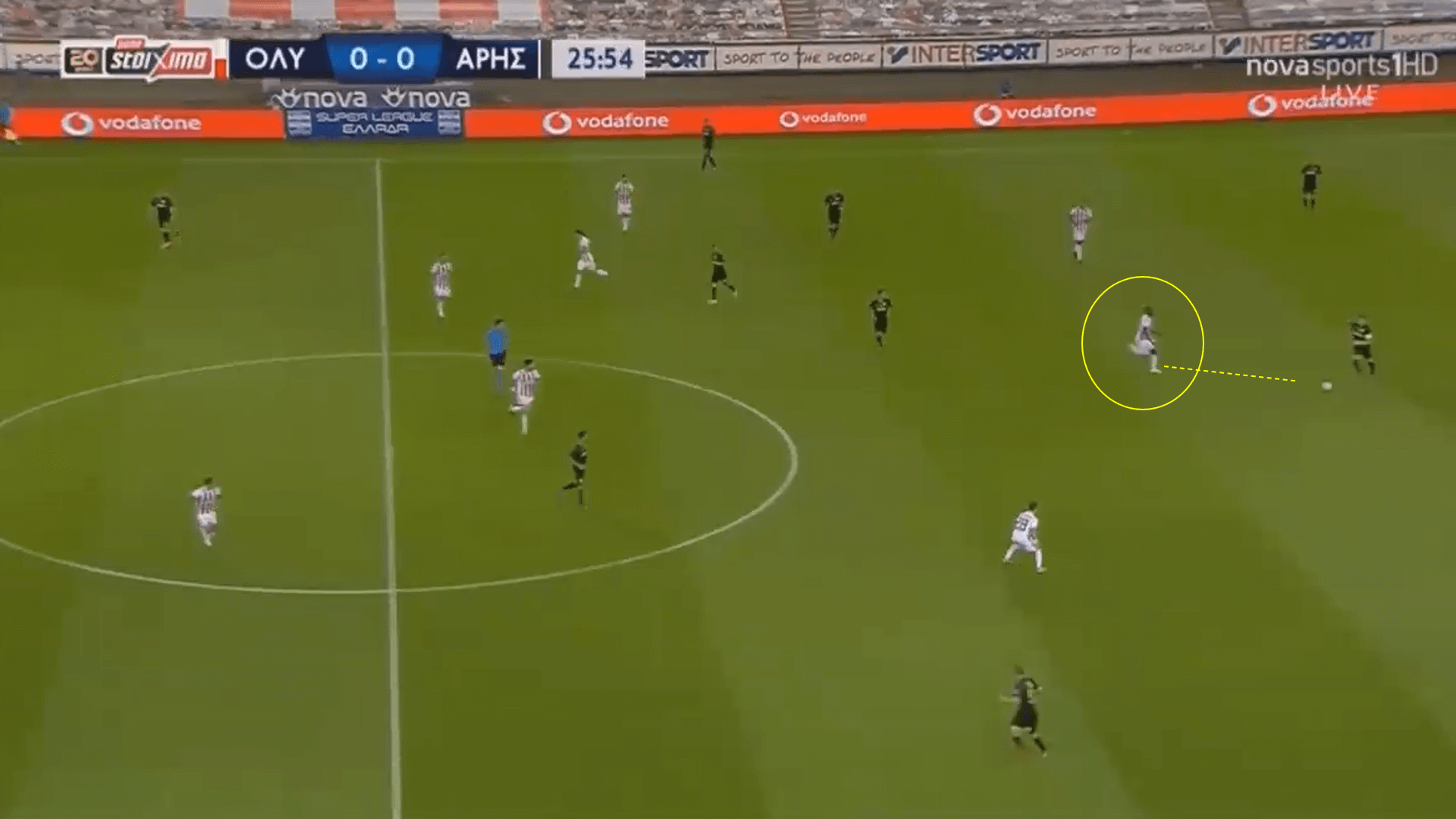 Once he has won the ball, we see that Camara has put his side into a great position. They outnumber the defenders and have caught them completely by surprise. Just winning the ball back is not enough though, it is now time for Camara to show his footballing intelligence. He could try and beat the defender with his running ability and get a shot away. Instead, he notices his teammate and releases the ball to capitalise on the great position Olympiakos have found themselves in. 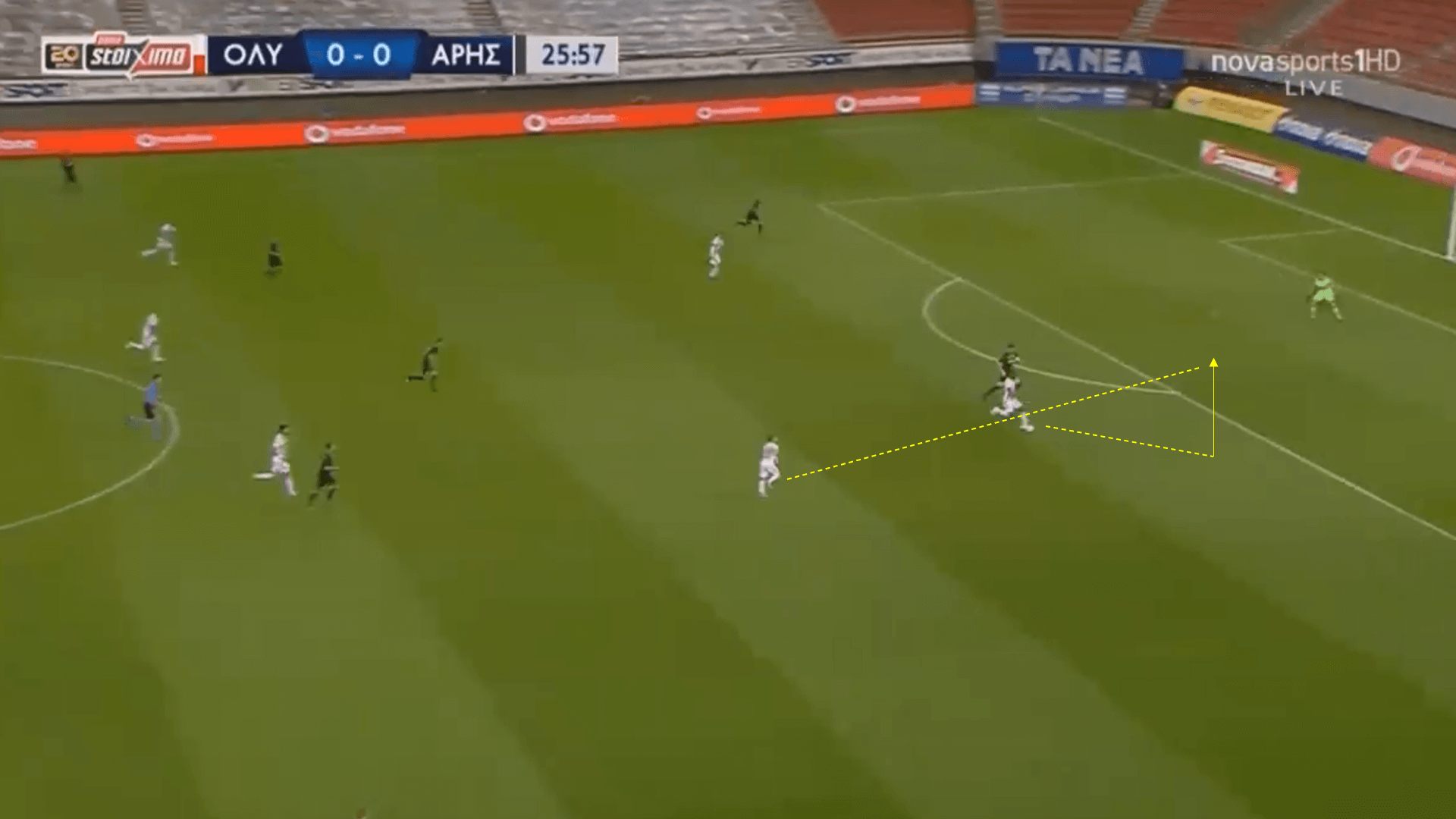 Camara doesn’t lose focus or just presume that his teammate will finish the chance. He remains focused and able to react to the eventual breakdown in play, finishing the move off when the ball finds him on the edge of the box. 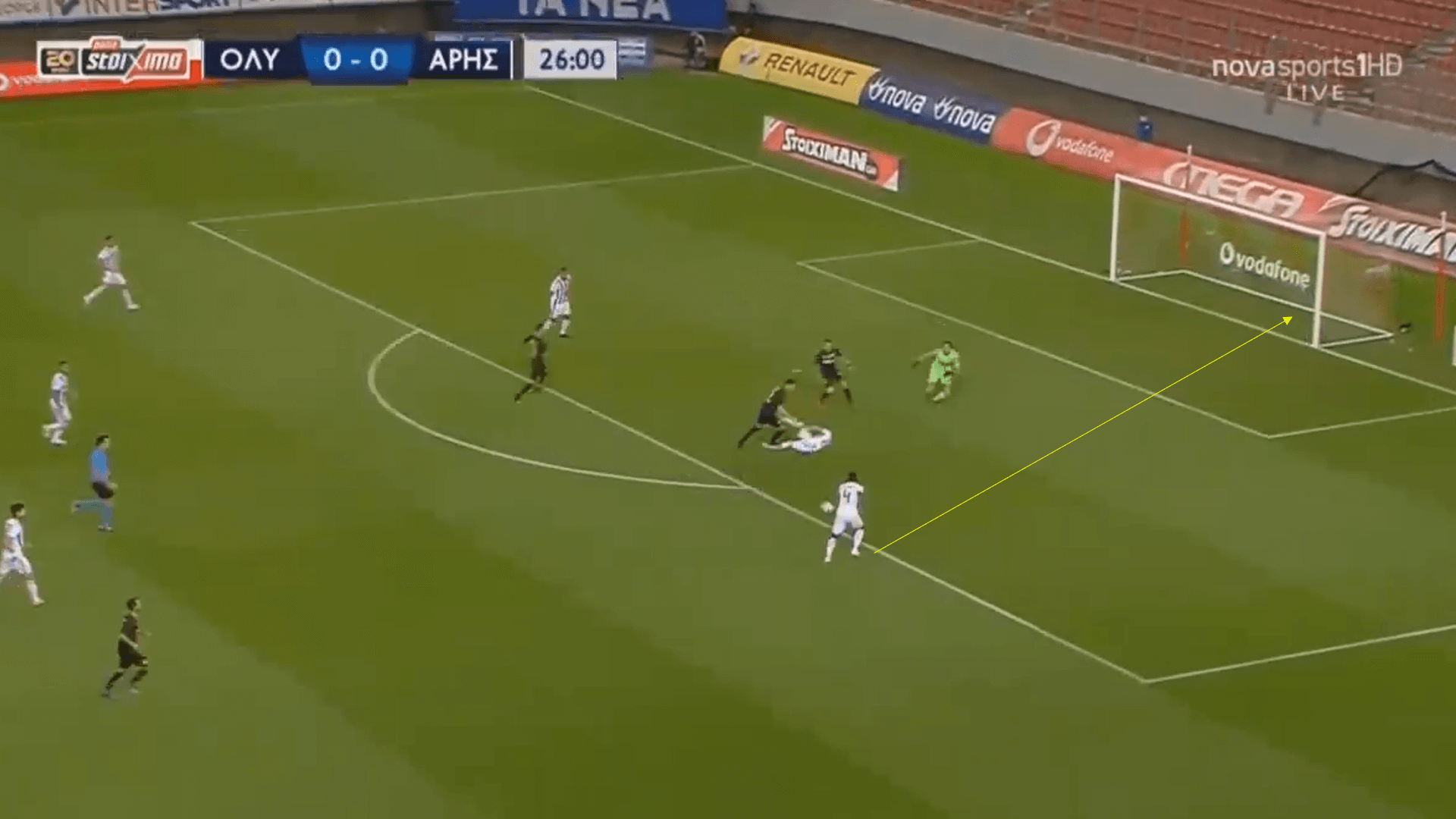 This entire move came from Camara’s ability to win the ball back. As a side, Olympiakos sat fourth in terms of pressing intensity, allowing 7.65 passes per possession. Camara was certainly a key component of this pressing game.

Looking outside of Greece, there are plenty of teams around Europe’s top leagues who like to play an aggressive pressing game. Camara should certainly interest those sides, as he has shown during this season with the Greek champions that he has the footballing intelligence and ability to slot into a pressing system effectively.

Camara is ready to leave Greece. He has done all he can at Olympiakos and there should be plenty of suitors for him. Linked with Newcastle last season, it would be surprising if they were not looking at him more seriously this season. Alongside English sides it is expecting that teams all across Europe’s top leagues are looking at adding the Guinean to their midfield.

Teams looking to play a more aggressive pressing style would benefit from Camara’s ability to put pressure on opposing players and win the ball back high up the pitch. He can also progress the ball through passing and running, while also having an eye for goal. Hopefully, we will see the Guinean lining up in one of the big European leagues for the 2020/21 season.