Atlético Madrid are top of the pile after 20 games into the 2020/21 La Liga season. They lead Barcelona (2nd) & Real Madrid (3rd) by 10 points having played one game fewer. So, it is fair to say that Simeone’s men are well on course to win the title. One of the big reasons for their success this season has been Luis Suárez (Yes, you read that right!). Suárez, after completing his transfer from Barcelona in the summer, is leading the charts for goals scored with 14 goals to his name. Lionel Messi, who almost left Barcelona in the summer, comes third for goals scored with 12 goals to his name.

This chart highlights some of the players leading the charts in goal contributions in the current La Liga season. 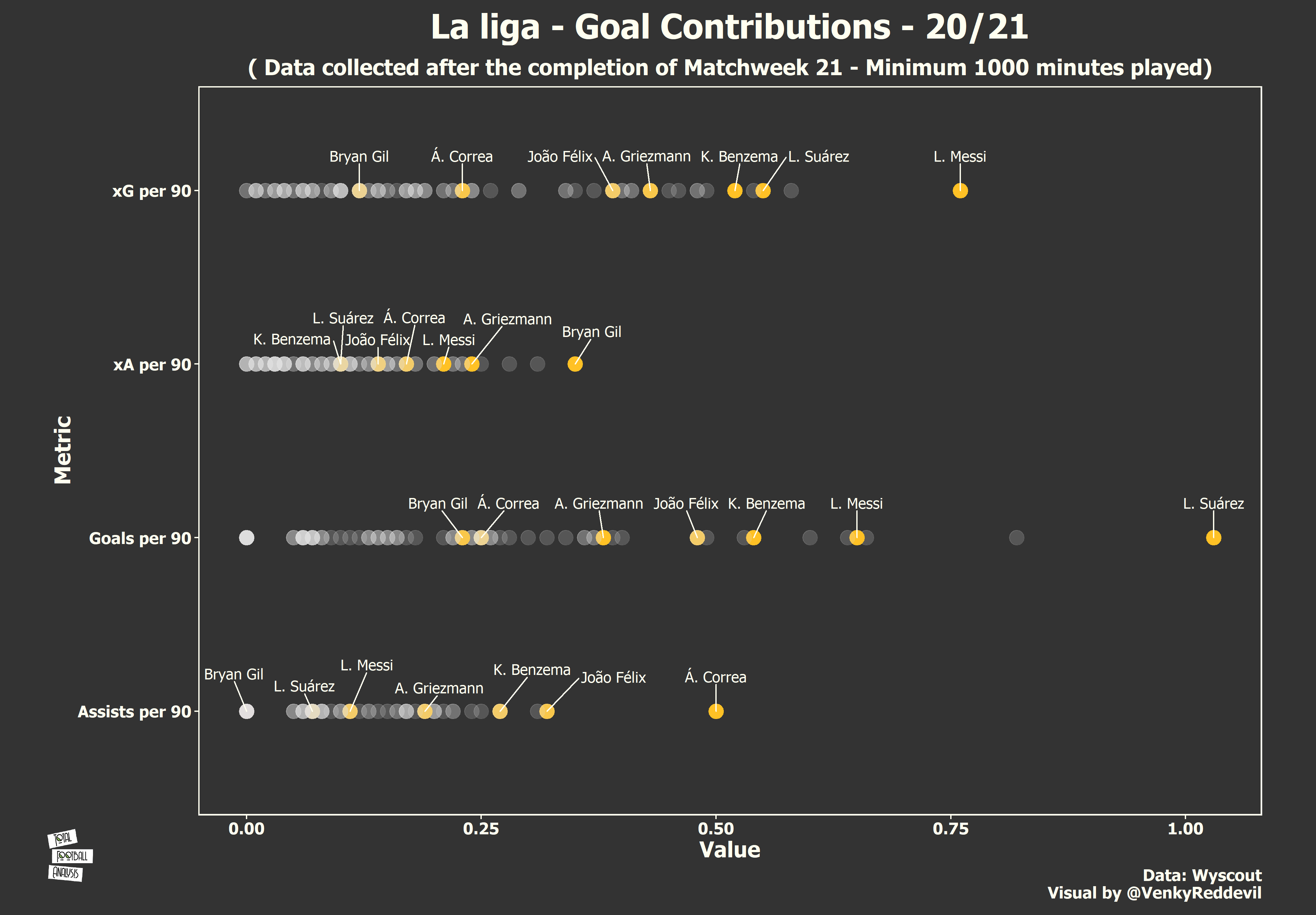 As you can see, Luis Suárez is well clear of the others in goals per 90 minutes. The one behind him is Youssef En-Nesyri. Lionel Messi, Karim Benzema, and João Félix are not too far behind. Lionel Messi leads the charts for expected goals (xG) per 90 minutes. One of the interesting names is Bryan Gil, on loan at Eibar from Sevilla. The Spanish teenager leads the charts for expected assists (xA) per 90 minutes, per Wyscout. Antoine Griezmann, after having a difficult first year at Barcelona, seems to be gradually regaining his form. Karim Benzema, the second highest scorer from last season, is pretty much well on track to repeat the feat. Suárez’s teammate Ángel Correa leads the table for assists per 90 minutes.

Many usual suspects sit atop the chart of these metrics. Suárez’s move to Athletico raised a few eyebrows in the summer but he has done an excellent job so far. The same can be said of Lionel Messi. A lot of people wondered whether Messi would have the commitment to perform well for Barcelona this season but, putting all the drama aside, Messi has been brilliant so far.  Bryan Gil is one to watch in the coming months as his loan move to Eibar has so far gone according to plan. Other players, including Karim Benzema, João Félix and Youssef En-Nesyri, also seem to be having decent seasons so far.