Kai Kennedy is an 18-year-old Scottish winger who is currently contracted to Rangers in the SPFL. He has represented Scotland at various age groups as he has moved through the system in Scotland. This season was something of a make or break for Kennedy at the club and it seems as though relations between the player and the coaching staff are somewhat stretched and Kennedy is now in a position that it is likely that he will move on.

We have to be clear that he still has significant development to go through and this is likely to be best served by spending time playing regular first-team football. There is a possibility that he will move to a bigger club before going out on loan to secure this.

Kennedy’s main strength is his pace and ability to change direction quickly when carrying the ball. He has plus speed and when combined with a low centre of gravity this makes it extremely difficult for opposition defenders to stop him in full flight.

Kennedy profiles as a wide attacking player and when played on the left-hand side, as he tends to be, he can cut infield on his right-foot and produces dangerous moments when committing players in central spaces. Kennedy displays an understanding of how to use and create space and can often be seen moving off the ball to open up pockets of space for teammates. His decision making, for such a young player, is strong and he can play weighted passes whilst travelling at full speed accurately. With this in mind there is a possibility that as he develops and fills out as little more he could move inside to play as an ‘8’ where his positional sense and ability to isolate and engage players in 1v1 situations could prove to be very effective in helping his team to progress the ball through the thirds.

From a defensive aspect, Kennedy is an excellent asset for the team due to his fantastic energy and tactical understanding when to press. Quite often we will see Kennedy as the first presser as he moves out to engage the opposition and he continues his press when the ball is played backwards. He has a good understanding of angles when pressing and keeps opposition players in his cover shadow as he moves to engage the ball carrier.

From a physical perspective Kennedy is listed at 163cm and has a relatively slight build. With the correct training regime however he could quickly put on weight and muscle, in a manner not dissimilar to the physical development of Ryan Fraser at Bournemouth.

In terms of building a tactical profile of Kai Kennedy we will concentrate on three key areas of his game. These combine to offer an insight into the kind of player that Kennedy is and to what he can become with the correct development. At the stages in which a player is ready to make the step to first-team football a players footballing identity should actually be developed to the point at which that player knows what his or her key strengths are. They can then use these strengths to help them to dominate games. Interestingly this is a philosophy of player development that has been referenced numerous times throughout the years by the Rangers assistant coach Michael Beale during his time at Sao Paulo and with the Liverpool youth teams.

So what are Kennedy’s key strengths and what is his playing identity? He is a player who is at his most dangerous when in possession and driving at opposition players. He has the capacity to take possession and then beat players with his ability to engage and beat players in 1v1 situations either in wide areas or in the centre. He also helps his team to progress the ball through the thirds through his intelligent occupation of space in the final third. He finds and exploits pockets of space in the half-space and draws opposition players out of position. Finally, he has the athletic ability and the willingness to work hard and press when his team are out of possession. All of this together suggests that Kennedy is ideally suited to a team with a coach who favours a type of counterpressing. 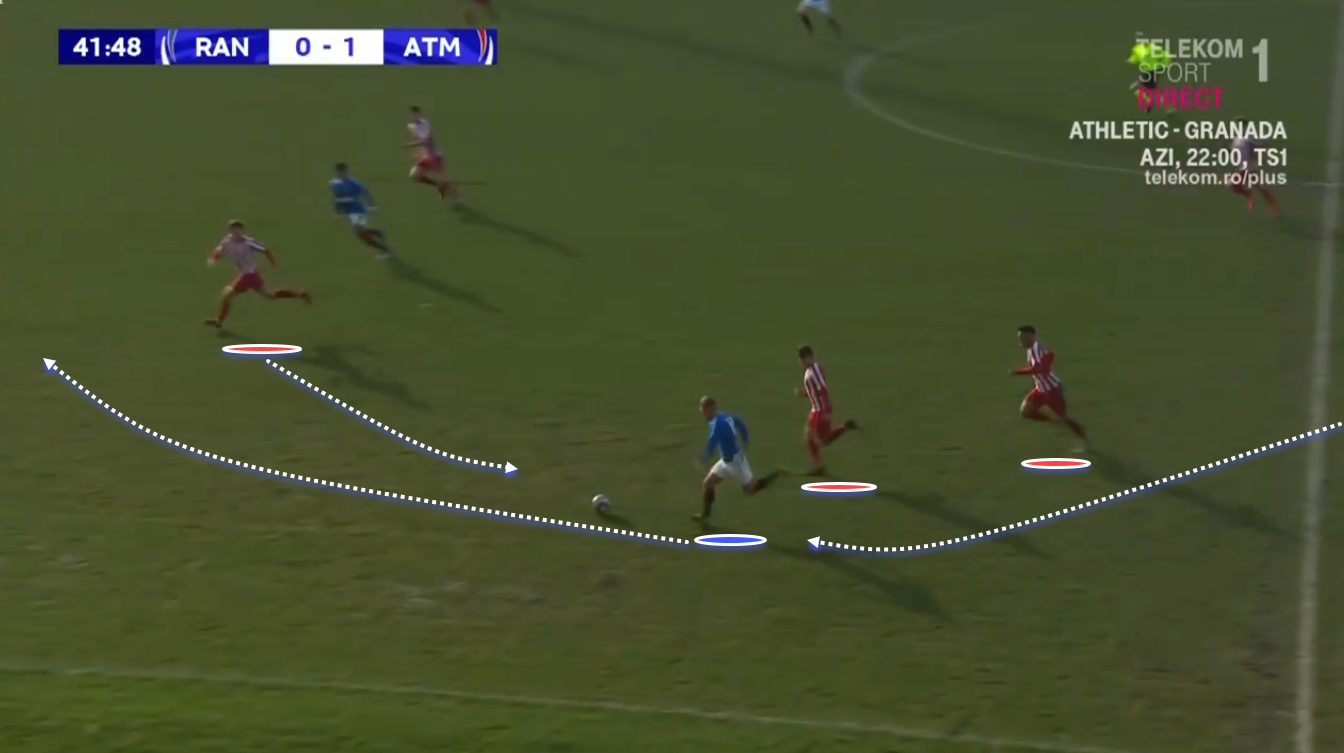 This past season saw Rangers youth side play against Atletico Madrid and it is a clear mark of Kennedy’s quality.that he was not overawed by stepping up a level in terms of quality. In the image above we see a situation with Kennedy driving with the ball down the Spanish side’s left-hand side. He had initially picked the ball up centrally in his own half as Rangers had looked to transition into the attacking phase. He is predominantly right-footed but even in these situations he has the body control and balance to be able to engage and beat defenders down the outside or on the inside.

Here we see Kennedy carrying the ball past two players before engaging and beating the defender who engaged him further on. 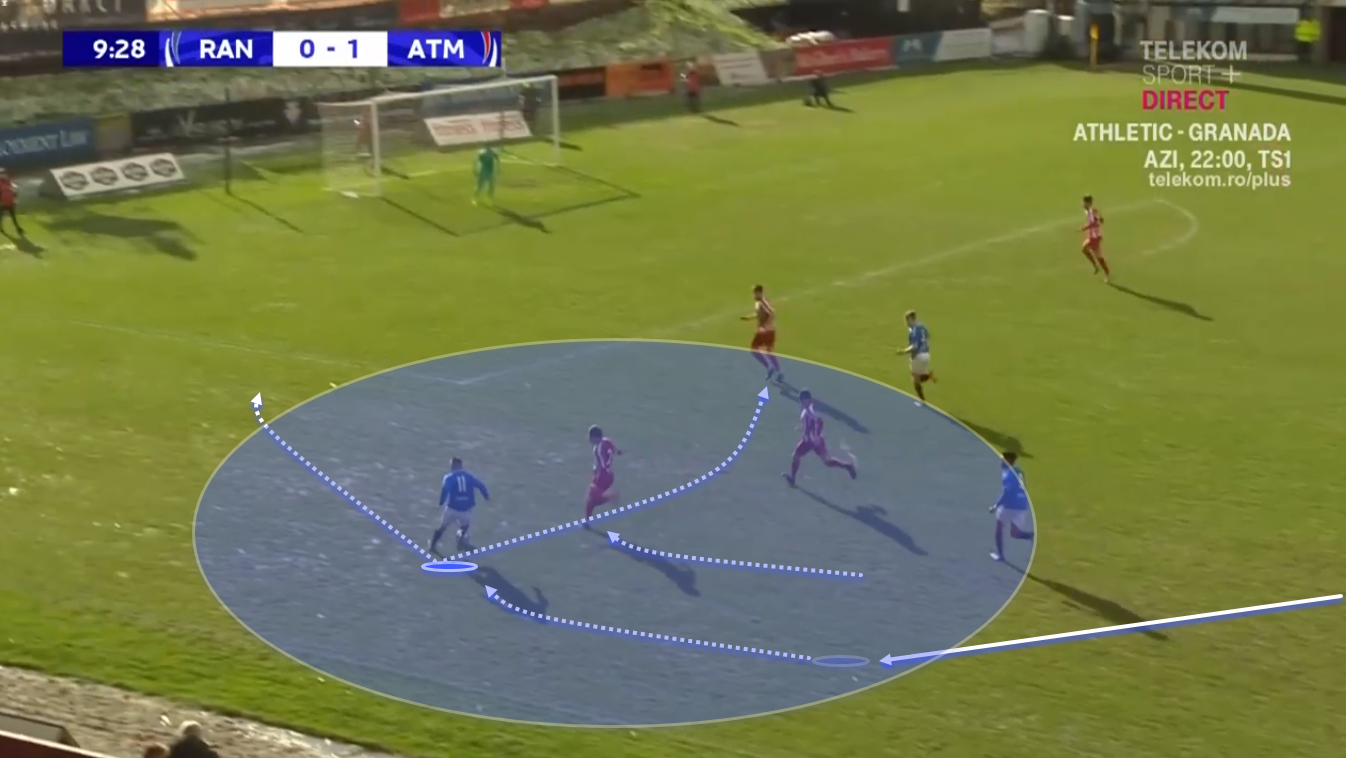 In this example, taken from the same match, we see a situation where Kennedy is on the left-hand side. He has picked up the ball in a deeper position before moving further towards the opposition goal. As the opposition defender is recovering his position we see Kennedy position himself with his body shape to either cut back inside towards the penalty area or to attack further down the line. 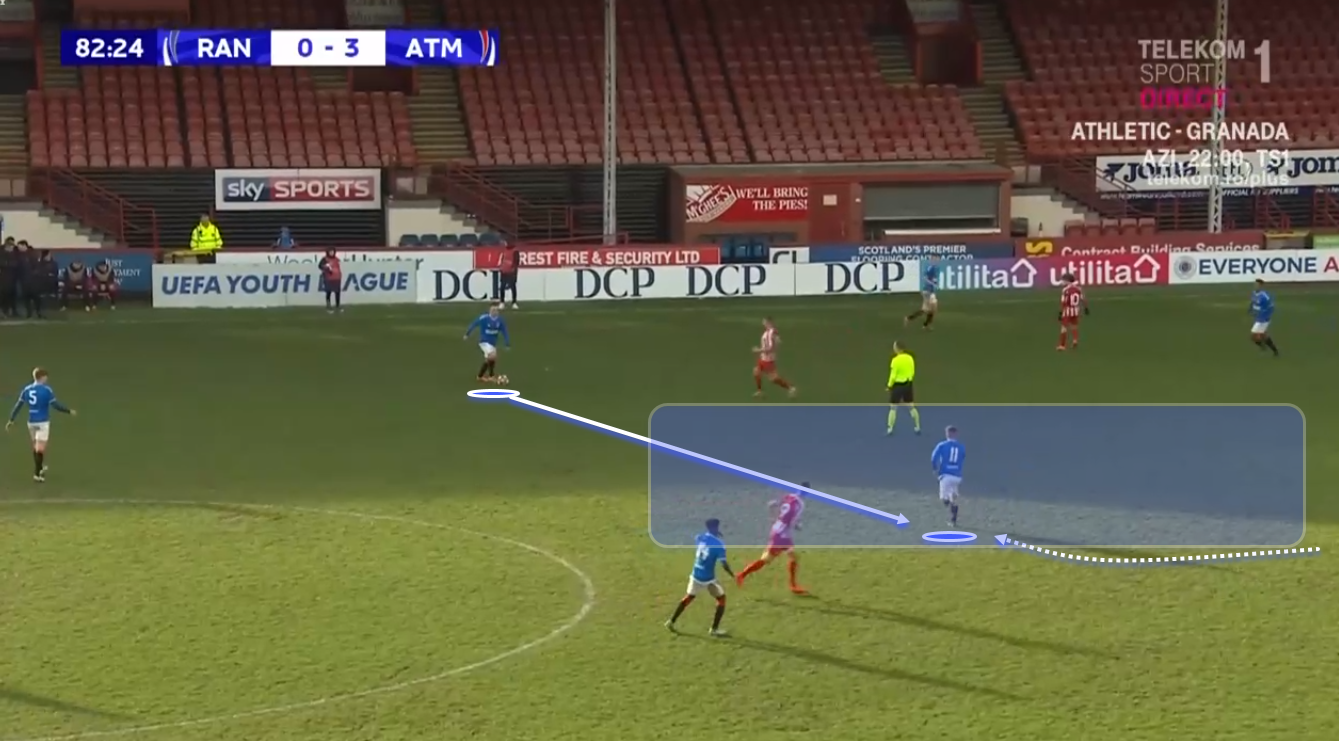 In terms of positions on the pitch above in an example of Kennedy’s ability to take position in the central areas. Here, the young attacker has made an intelligent movement towards the ball from a deeper area. He has moved from a position where he was initially positioned close to a defensive player. As the ball has progressed forward he makes  movement back towards the ball to receive in a large pocket of space. In these situations Kennedy receives the ball on his back foot where he is able to open out his foot to move the ball into space and attack forward. 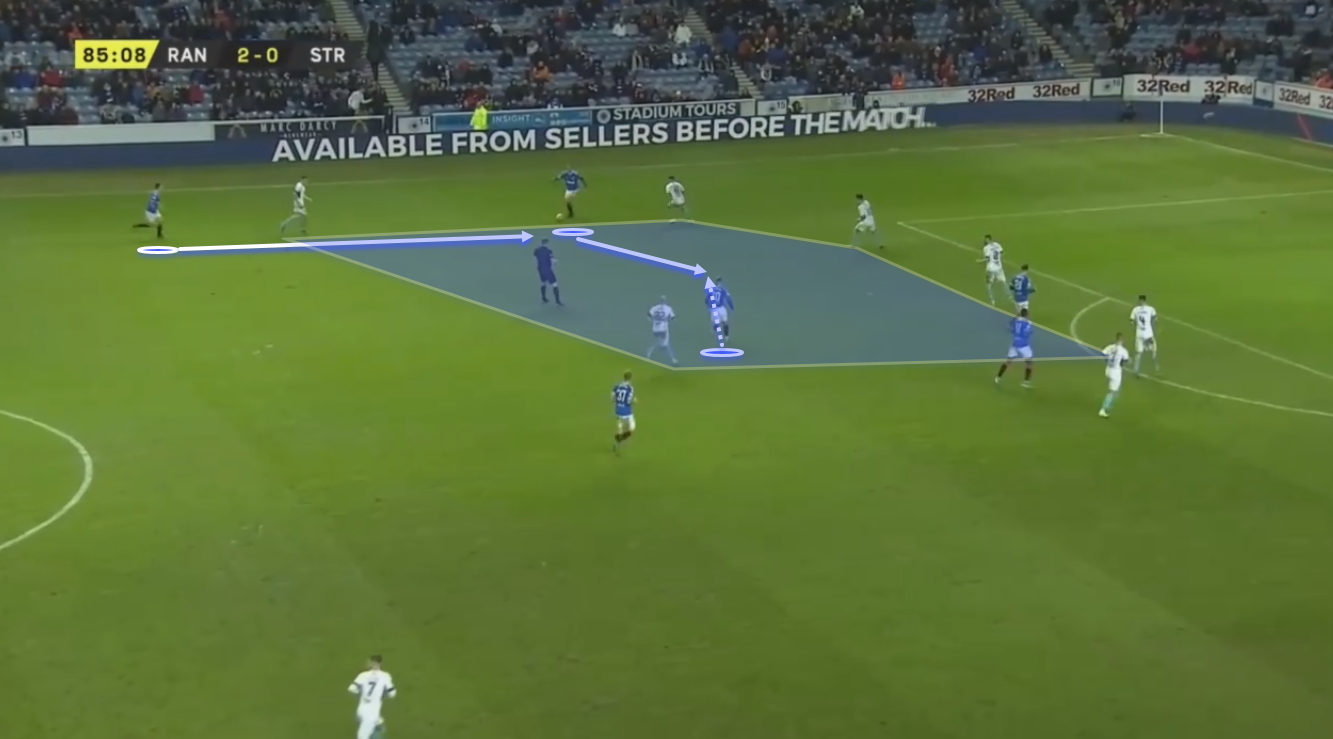 In this example we again see Kennedy positioning himself intelligently to receive the ball. As the ball progressed in the first instance in the wide area we see Kennedy move towards the ball in order to connect outside the opposition penalty area. He, again, makes a movement to create separation between himself and the defensive player in order to ensure that he receives in space. As he receives the ball on the edge of the penalty area he is able to touch the ball forward to look to penetrate into the opposition penalty area. 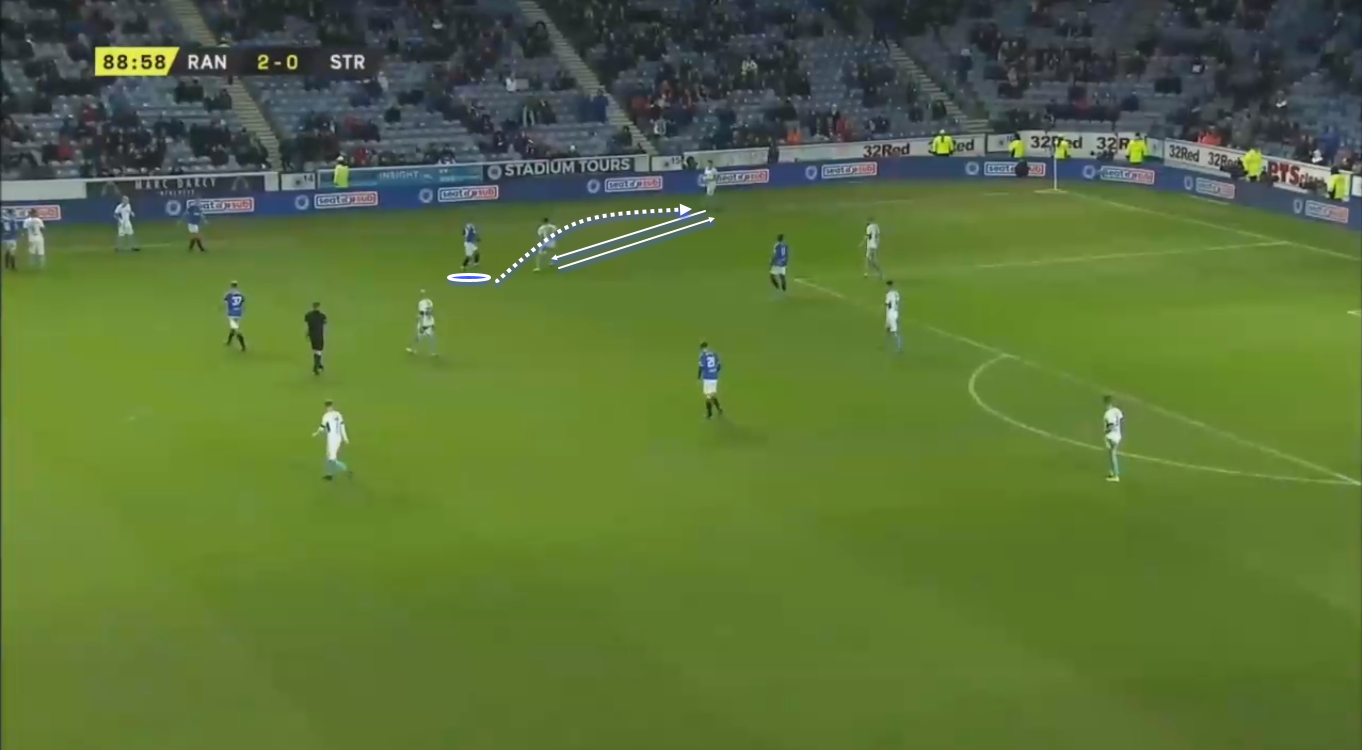 Out of possession Kennedy often is the player who leads the press. We see a situation here with the opposition looking to play out from a throw in. As the ball moves inside to the player that Kennedy is initially covering it is then bounced straight back to the player making the throw, Kennedy is quick to move past the receiving player to continue to press but as he does so he keeps the player in his cover shadow. The pace of the press and the angle of the run are enough to ensure that the player taking possession of the ball will rush their clearance. 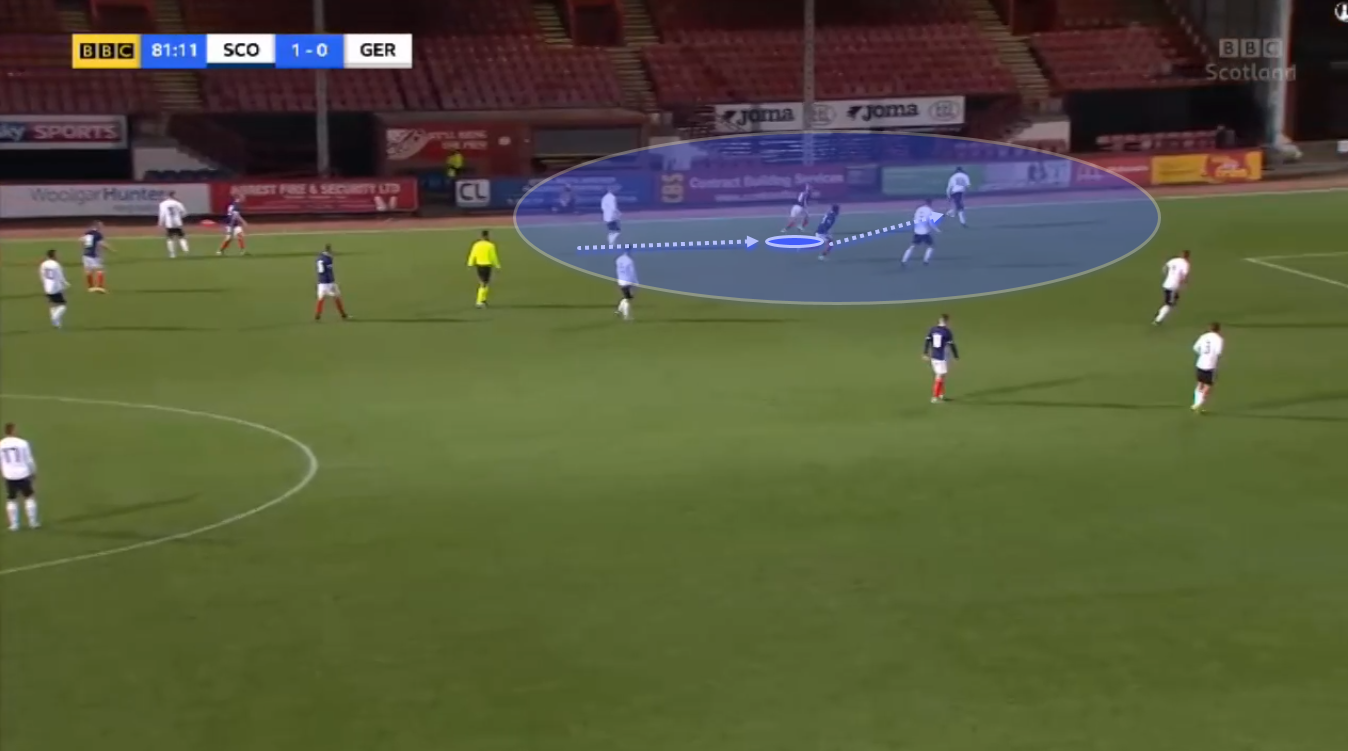 In this instance again we see Kennedy leading the press in order to put pressure on the German defender. The right-back for the Germans has taken a poor touch on receiving the ball and this,  in-turn, is a trigger for the press from Kennedy. Such is the explosive nature of the pace that Kennedy possesses he is able to react very quickly to poor touches from opposition players and this can be a key factor in the counter pressing for his team. As he closes the player in possession down the German defender looks to make a pass back to the goalkeeper but Kennedy continues to press and moves towards the opposition player.

Now feels like the right time for Kai Kennedy to move on from Rangers. The club finds itself in a situation where the focus has to be on stopping Celtic from winning their 10th title in a row. As a natural consequence of this there are limited minutes available to young players within the squad. From a personal standpoint Kennedy is in a position now in which he has to get regular first-team minutes in order to continue his development.

From a national team standpoint the powers that be at the SFA will be hoping that Kennedy makes an intelligent step in his career in order to develop into a player who could be of use to the national team.