Harry Kane & Son Hueng-Min were deemed to miss the rest of the season when both the players suffered serious injuries before the coronavirus pandemic put an abrupt end to football. But the restart of the league in July allowed both the players to return to action and get involved in their team’s push to secure a Europa League spot. Harry Kane ended the 2019/20 season with 18 goals, of which Son Hueng-Min assisted four. The visualization below shows all four goals scored by Kane that were assisted by Son. 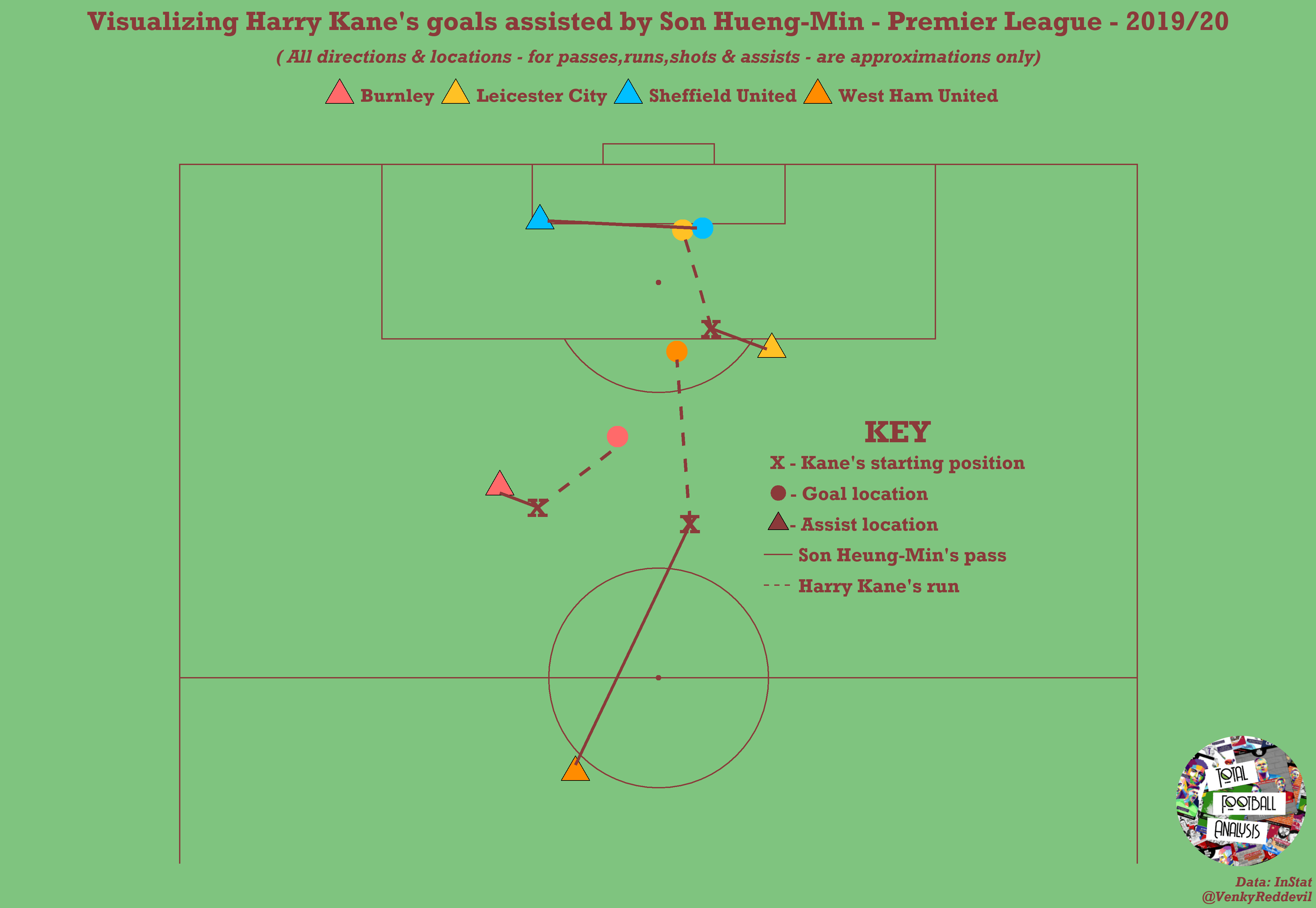 Towards the end of September, Tottenham travelled to the King Power stadium to face Brendan Rodgers’ high-flying Leicester City. The foxes had lost their previous games away to Manchester United. In the 29th minute, Harry Kane put Spurs ahead with a scrappy finish in the 29th minute. Son Hueng-Min backheeled a pass in the edge of the box, which Kane collected and while driving inside the box, he finished it on the fall. However, Leicester City scored two goals in the second half through Ricardo Pereira and James Maddison to win the game 2-1

Spurs 5-0 win over Burnley in the beginning of december will be remembered for multiple wonder strikers by the team from London, especially for Son’s premier league goal of the season but there was another beautiful goal as early as in the fifth minute of the game by Harry Kane. The South-Korean picked up a clearance from Toby Alderweireld and laid it for Kane who hit a powerful strike from outside the box.

Spurs faced West Ham at home in their second game of Project Restart. This game was also Kane’s second game since returning from an injury. Much was expected of Kane in this match after failing to have a touch in the Manchester United’s penalty area in the game prior. He did end the match against West Ham with a goal, albeit only very late in the second half. The England captain collected a through pass almost at the halfway line from Son and calmly finished it past Lukasz Fabianski to secure the three points for Spurs

In what was a clash of two teams trying to avoid defeat to get to an European spot, Spurs travelled to face Sheffield United. After losing their previous outing to Manchester United, this was a must-win game for the Blades if they were to have any chance of qualifying for Europe. The Blades went on to win the game 3-1 after goals from Sander Berge, Lys Mousset and Oliver McBurnie. Harry Kane had a goal ruled out earlier in the first half, but the forward went to score a 90th min goal assisted by Son Hueng-Min in what was the only consolation for Spurs on that day. However, Spurs never lost after this game in the league and went on to secure a Europa League spot.