Players of African descent, such as the likes of Chelsea’s Didier Drogba, Liverpool’s Mo Salah and the first African Ballon d’Or winner, George Weah have been lighting up the football world for many decades. On our television screens, we see these wonderful players doing wonderful things; one thing we do not see is how these legends of the game got to the top. Before the bright lights of La Liga and the Premier League, the first phase of these players’ development took place at academies stationed across Africa. Diambars FC in Senegal is where Patrick Viera took his first steps in football, likewise for Yaya and Kolo Toure, who began their footballing careers at MimoSifcom Academy, Ivory Coast. These academies are the platform that propelled the careers of these footballers and gave them the platform to receive European acknowledgement.

The country of Cameroon is not new to developing young starlets, with the likes of Samuel Eto’o (Kadji Sports Academy) and Roger Milla leaving their mark on the game and now, it seems another is waiting in the wings. Jean Onana, a 21-year-old central midfielder, started his footballing career in the Nkufo Academy in Cameroon, before moving to Ligue 1 side Lille, a hotbed of young talent, in 2020. Having served a season on loan at Royal Excel Mouscron in Belgium during 2020/21, Onana has now remained in France and is currently on loan at Bordeaux until 2022. The young midfielder has shown great promise so far this season, and because of this, the likes of Serie A giants AC Milan are taking a keen interest.

In this tactical analysis and scout report, I will look into Jean Onana’s game, unpacking the strengths and weaknesses of the youngster, while also discussing how far he can go within the world of elite football.

The Cameroonian midfielder stands at 6’2, with a large frame and long limbs, and Onana uses these physical attributes to his advantage. When observing the stats sheet, Onana produces pretty adequate numbers, especially for his age. On a defensive front, the midfielder accumulates 3.57 tackles per 90 minutes, along with 4.22 interceptions, 2.17 aerials won and 3.14 blocks. An attribute that allows Onana to amount to so much defensive work is his large frame. Onana excels when using his body to disrupt the opposition’s passing game, and he shows a good reading of the game, regarding stepping into passing lanes to take possession of the ball.

About Jean Onana’s footballing nature and tendencies, the youngster is a ‘pressuriser’, meaning he prefers to step at and retrieve the ball, when possible, as well as apply pressure to the opposition ball carrier, rather than waiting for them to go to him. The numbers would agree with this notion, as Onana amasses 24.48 pressures per 90, which places him in the top 6%, along with a pressure success rate of 35.6% which places Onana in the top% within the category. Jean Onana also has a long stride when running which mixes well with the player’s incredible engine, as he can serve the field all game long with ease.

Upon observation, Jean Onana’s defensive qualities are obvious to see. On the defensive side of the ball, he is a player that mixes his intelligence and physicality to good measure. Out of possession, he can read the space well and single-handedly break down a team’s offensive structure and retrieve the ball swiftly like a gust of wind. With his youth, inexperience and tenacious personality can come at a cost. As mentioned prior, Onana is still quite young and still within the developmental portion of his career, and during this time, he will learn valuable lessons. A common issue found in young defensive midfielders is when and where they step out to create pressure. A plus for Jean Onana is that he does not suffer from this issue. The problem the midfielder does face is the technique he shows when forcing the pressure. Onana struggles when facing players 1v1 who showcase good, quick body movements, because of trying to anticipate too quickly. 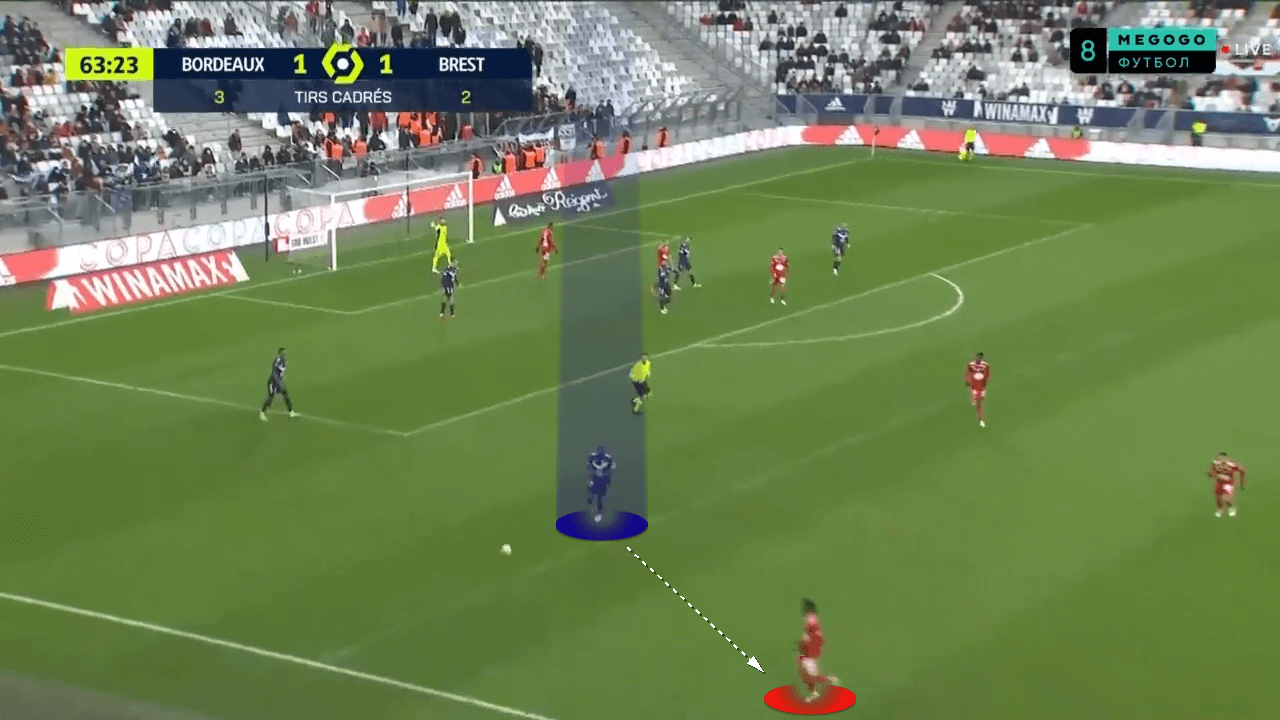 Now faced 1v1 against a direct opponent, Onana takes a gamble, thinking that the player in front will attempt to cut inside so makes a step to the top left to close the angle. The player in possession is able through a quick switch of feet and evade Onana’s pressure and, because of this, could exploit the space Onana gave up behind him. 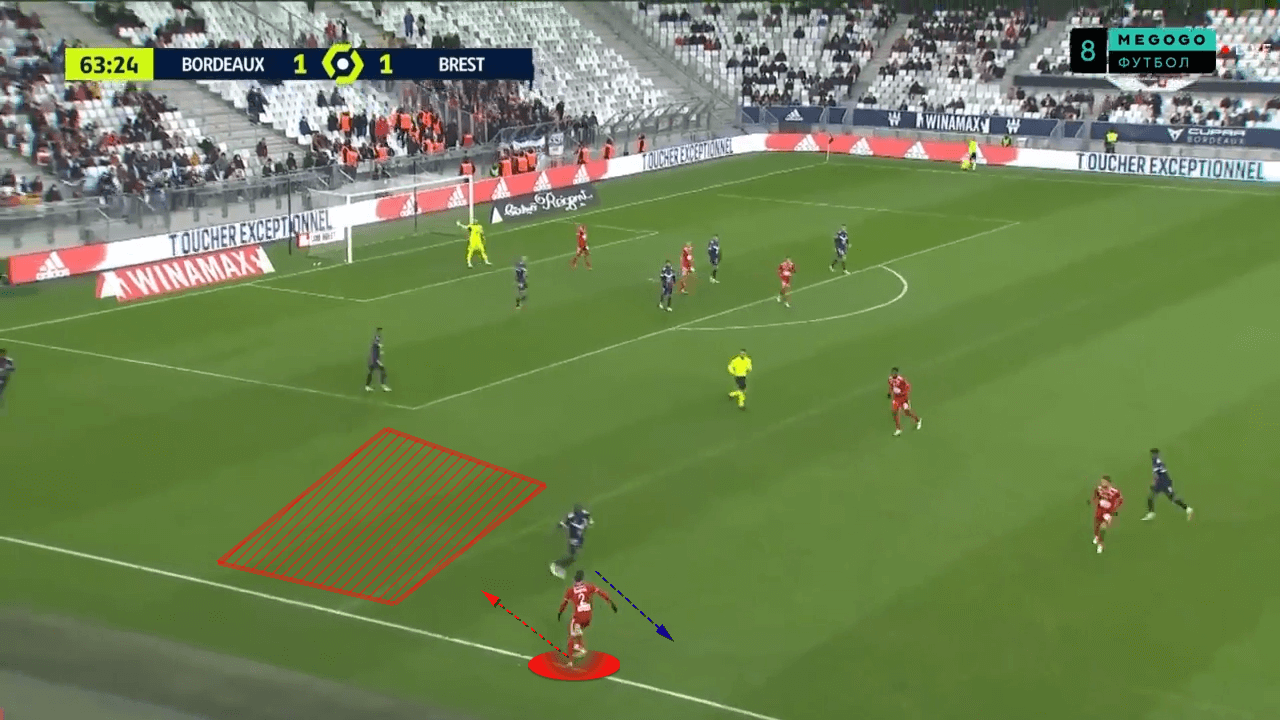 Regarding Bordeaux’s tactical approach, they position Onana either in a double pivot in a 4-4-1-1 or as a single six in a 4-3-3. Within these roles, the young midfielder showcases his ability to interpret the surrounding space, to become a passing option for his teammates. Onana understands when to drop slightly deeper and split the centre-backs for numerical superiority, as well as when to step into pockets of space to become a supporting pass. As explained, Onana’s long stride allows him to move laterally across the pitch effortlessly, and with this attribute, Onana can pivot and be a reference point for his teammates in possession when under opposition pressure.

As the play takes place around him, Jean Onana impressively uses scanning over his shoulder to know the whereabouts of players within his vicinity, which is useful as he can make quick passes and progress forward. During the defensive phase of play, the Cameroonian uses scanning well when out of possession, and this attribute allows him to be so alert to danger and intercept so well.

As play is building on the right-hand side, Onana scans over his left shoulder, noticing Lyon’s Bruno Guimarães, while already having an opponent right next to him. 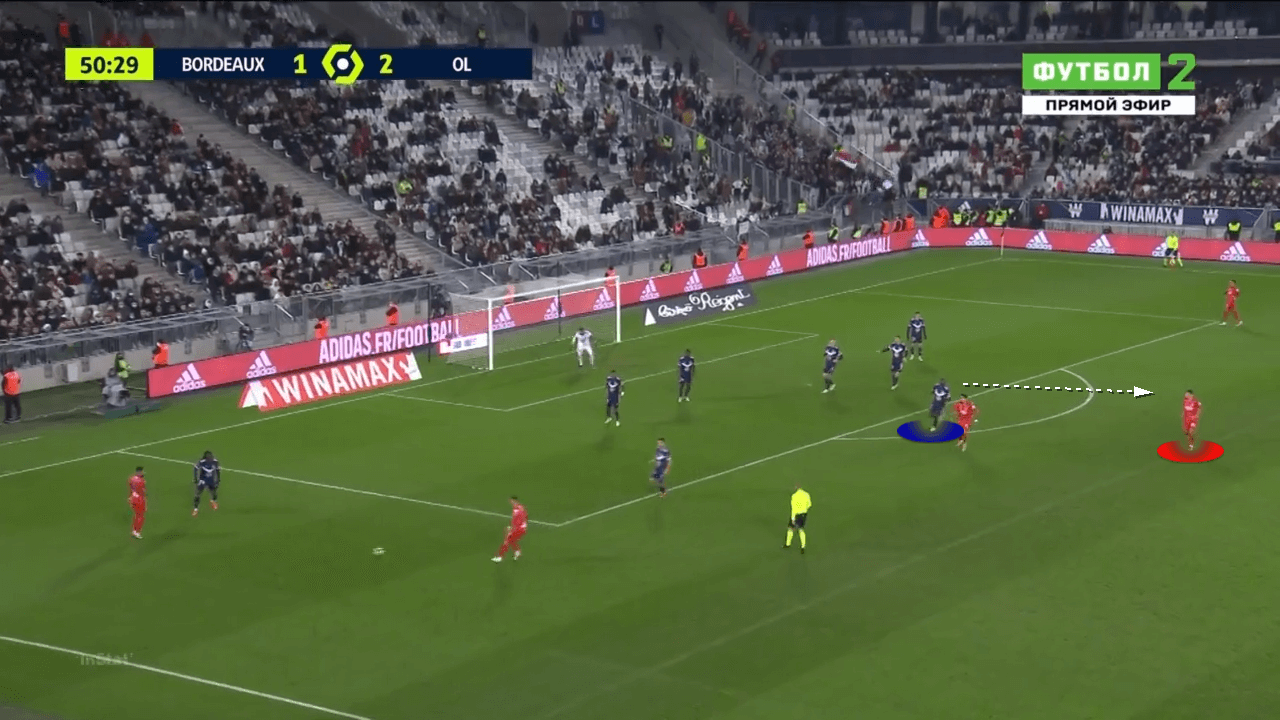 The ball eventually comes across and Lyon’s Lucas Paquetá steps over the ball, allowing his teammate behind him so he can be played into space. As Paquetá dummies, Jean Onana is already one step ahead. During this situation, Onana does well to adjust his body and intercept because he was initially aware of the surrounding danger. 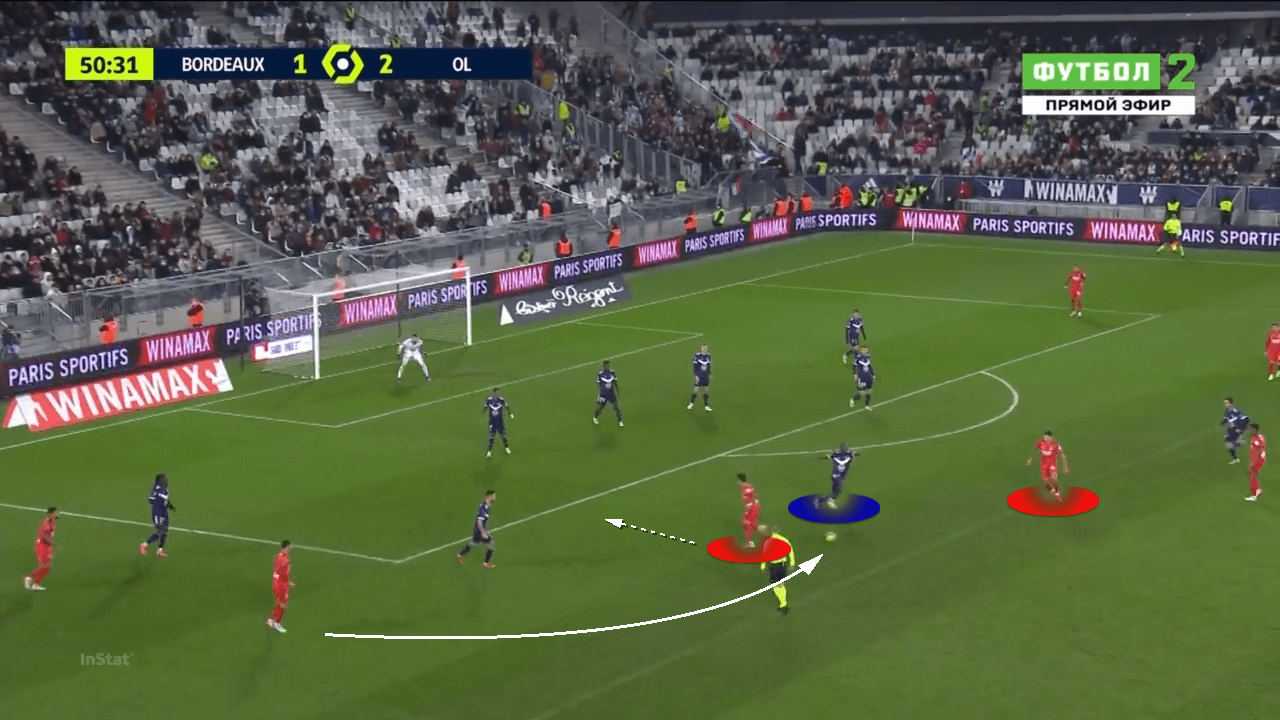 When discussing Jean Onana’s ball-playing ability, we have to remember the team he plays for. Bordeaux sits 17th in the French topflight and averages less than 50% possession per match, so his current team is probably not the best place for his passing capability to a full extent.

In a technical sense, Jean Onana displays real promise on the ball in a multitude of ways. For instance, the midfielder is very calm when under pressure from opposing players, as he can manipulate the ball around opponents, using tight quick touches while possessing a good switch of feet on the ball. Onana stands out when protecting the ball when pressed, as he can use his body as a shield. The 21-year-old is a confident figure on the ball and does exhibit passing prowess.

Jean Onana’s metrics also show that he is adept at holding onto the ball under pressure, as he completes 9.64 passes under pressure per match, which impressively stands him in the 84th percentile. He has the trust in his ability to deliver a long ball over the top of the opposition’s defences. Occasionally, these passes can be under-hit, which is something he can improve upon.

On a positive note, Onana shows a decent repertoire of passing. As he possesses, he can play short and bounce passes, along with line breaking and final third passes. 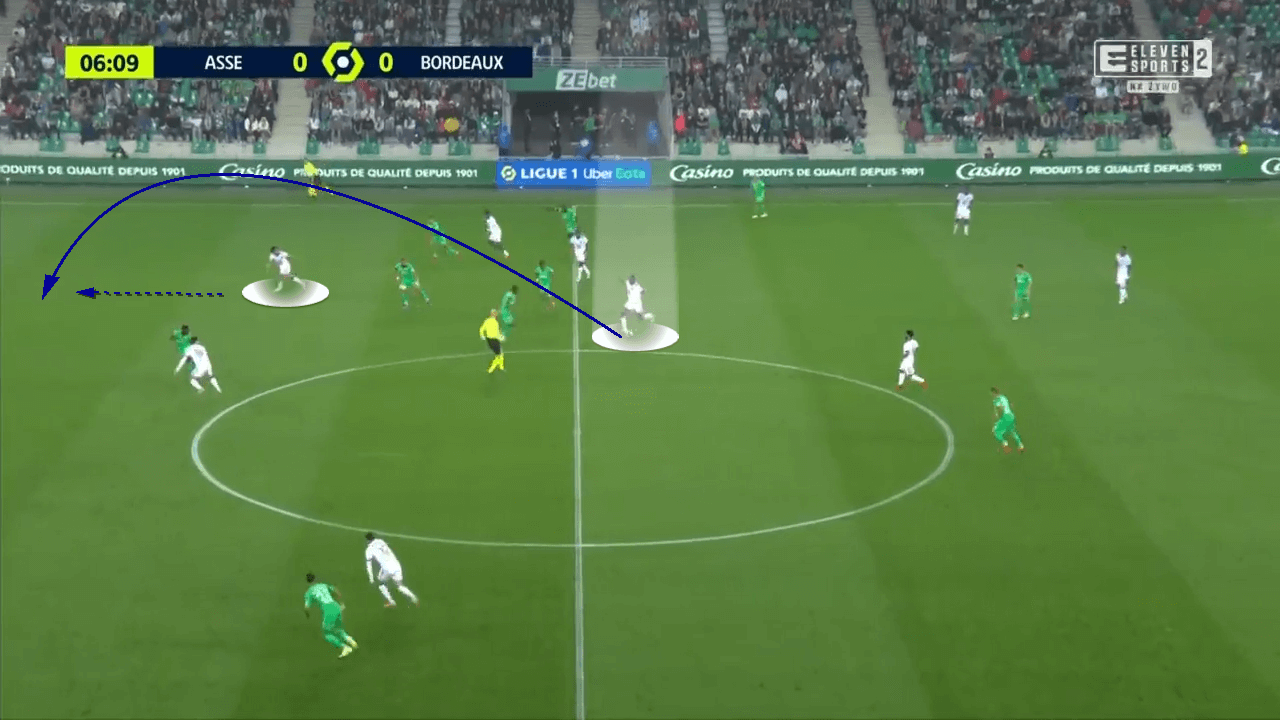 As the Bordeaux man is usually the deepest midfielder, his passing is usually quite short and safe, but this is not an indictment of his skill, as he is most likely instructed to operate in this manner because of quality ball-progressors such as Yacine Adli in the side. Nevertheless, Jean Onana can break lines when the opportunity arises. Onana’s dribbling, to a certain extent, can be slightly awkward but shines when driving past opponents in a straight line and moving with the ball into space.

So far, during the 21/22 Ligue 1 season, Jean Onana has shown he has the minerals to become a top player within the footballing landscape. Young players such as Onana are moldable, which can be a gift for a team but a curse for Onana’s development. The young Cameroonian midfielder has a multifaceted skill-set, as he is excellent when breaking up play, can drive with the ball, create shots, and possess great physical stature.

Currently, at Bordeaux, he plays as a number six and, during some matches, is stationed as a number eight, and if a club comes calling, may have to decide his position. Onana as a permanent defensive midfielder could work, as he possesses the intelligence of space mixed in with good defensive output and strong aerially, which is a similar profile to Manchester City’s Rodri. With Onana’s ball carrying and pressing nature, an argument can be made that it would pigeonhole his abilities and not get the most out of his skill-set.

Time will tell what lies for the young midfield out of the Nkufo academy, but regardless of his next destination, whether it be AC Milan or his return to his parent club Lille, that team is getting a player with genuine talent.