Evaluating defensive performances of players and teams is not an easy task due to the hectic nature of the game and various components that are to be considered. Moreover, there are not that many defensive metrics as there are offensive ones to analyse what’s going on on the pitch.

However, with enough given context, we can use statistics and see how different players perform defensively in regards to the systems they are playing in. So, in this data analysis, I used team and player data to identify the best tacklers in the Premier League in relation to the number of fouls. Even though fouling doesn’t always come from a failed tackle attempt, it generally happens when a player can’t stop or fail to stop an opponent in any way. Thus, we can use tackles and fouls together to see what players are statistically better at tackling.

On the x-axis we use the total amount of tackles per 90 minutes as a volume metric, and on the y-axis we see tackles per foul above team average. This basically tells us the proportion between tackles and fouls of a certain player in regards to their defensive system.

Negative values on this metric mean that a player performed worse in this component than his team in general, and the higher the value, the better he performed in comparison to his team. What this metric definitely doesn’t tell, however, is player’s defensive quality and overall performance, because it’s a very specific way to look at it and imperfect in many ways because of how different defensive styles are for every team. 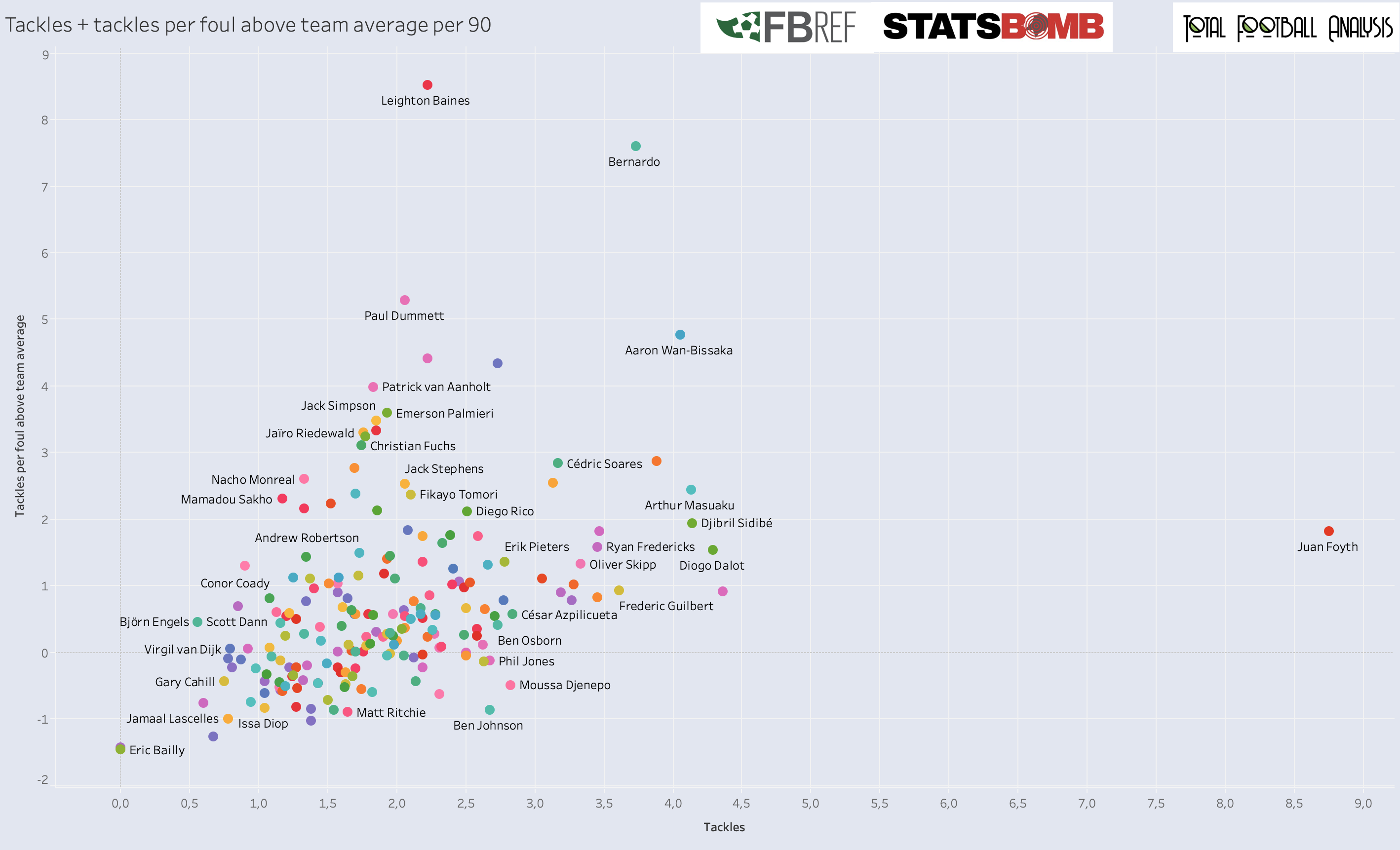 Juan Foyth is leading the way in terms of tackles attempted with 8,75. The best tackler, however, is Everton legend Leighton Baines who has 8,53 in tackles per foul. Despite not playing regular minutes this season, Baines performed well in this area. The next outlier here is Brighton’s 25-year-old left-back Bernardo, who has 7,60 and a higher volume than Baines. Newcastle’s centre-back Paul Dummett is the third-best with 5,29. Finally, the undisputed leader of all tackling charts Aaron Wan-Bissaka lands in the fourth position with 4,77 on the y-axis and 4,05 tackles per 90 minutes. As the chart gets more clustered, we begin to see a lot of full-backs: Patrick van Aanholt, Emerson, Cédric Soares and Arthur Masuaku to name a few. The possible reason for that may be an isolated nature of defending in wide areas and a higher chance of opponent taking the given player 1v1, which can help to boost these player’s statistics.

Virgil Van Dijk is at 0,05 and César Azpilicueta is at 0,57 according to this metric, which once again proves a point of the inability of this metric to dissect defensive qualities.