Amid the recent news of the Eredivisie possibly voiding the current season, PSV Eindhoven may get another opportunity to qualify for the UEFA Champions League group stage. They had reached the second qualifying round last July but lost on away goals to Swiss side FC Basel. Among the players likely to excel in this second chance is Dutch defender Denzel Dumfries.

Dumfries played a vital role in Sparta Rotterdam’s 2015/16 Eerste Divisie title campaign, consistently starting for his local club at age 19. After a single season at Heerenveen two years later, Dumfries completed the move to PSV and instantly made a strong impression, being named to the 2018/19 Eredivisie Team of the Season alongside players such as Matthijs de Ligt, Hakim Ziyech, and Frenkie de Jong. Now, Dumfries is considered a staple in PSV’s starting eleven, has seen experience in the Netherlands national team, and has the option to either continue in the Eredivisie or consider a transfer to a club in Europe’s top five leagues ahead of the upcoming season. The tactical analysis in this scout report will dissect Dumfries’ style of play for both club and country.

Dumfries typically operates as an attack-focused right-back. At 24 years old, Dumfries is considerably active while maintaining structural width on the pitch. 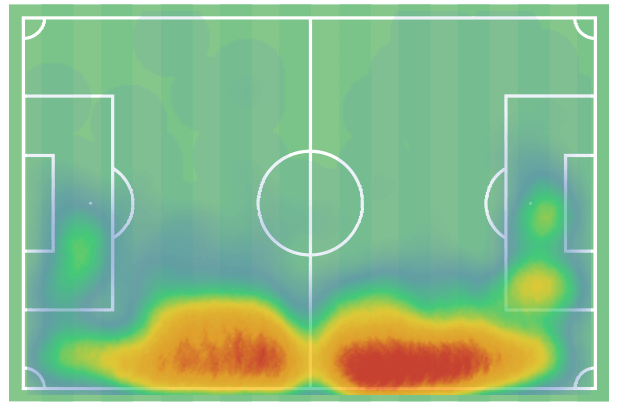 In Dumfries’ 2019/20 heat map above, we can clearly see the emphasis on heavy forward positioning in the wide right zones. Additionally, there is also evidence of his aggressive, attacking playing style via the highlighted areas in the right half-space of the opposing box.

Dumfries constantly maintains this wide positioning, rarely stepping too far centrally in his own defensive half with the exception of tracking his marked man, compacting a defensive block, or shifting inside to cover for the right centre-back. Below is one such example in which Dumfries maintains a deeper, more compact position in the defensive block and successfully parries the ball out of play. 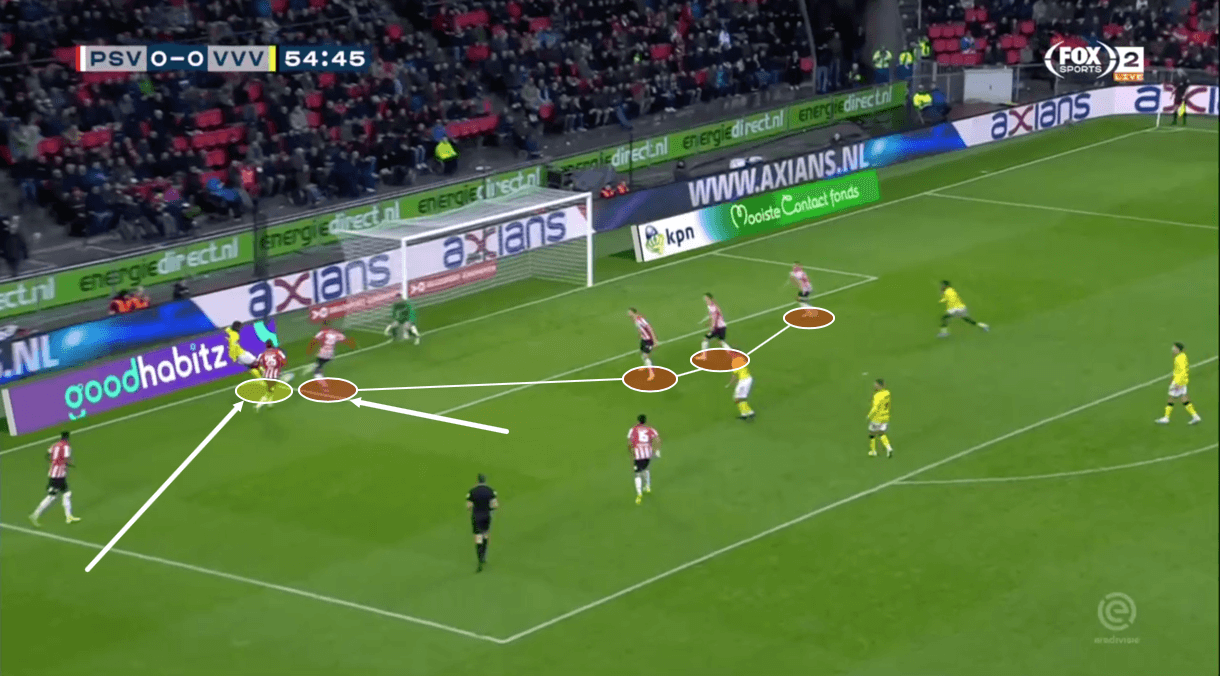 The image below is an example of the more common positioning taken up by Dumfries. With the opposing front six defending in a more centralised, compact block, Dumfries occupies his high and wide positioning with PSV in possession, often sitting higher than his left-back counterpart. He receives the pass in an open stance from the centre-back Daniel Schwaab to allow a fast, smooth turn in progression, something Dumfries does consistently. His presence wide helps lure the opposing left-back wide, opening a gap in the back line for Dumfries to complete a pass through. 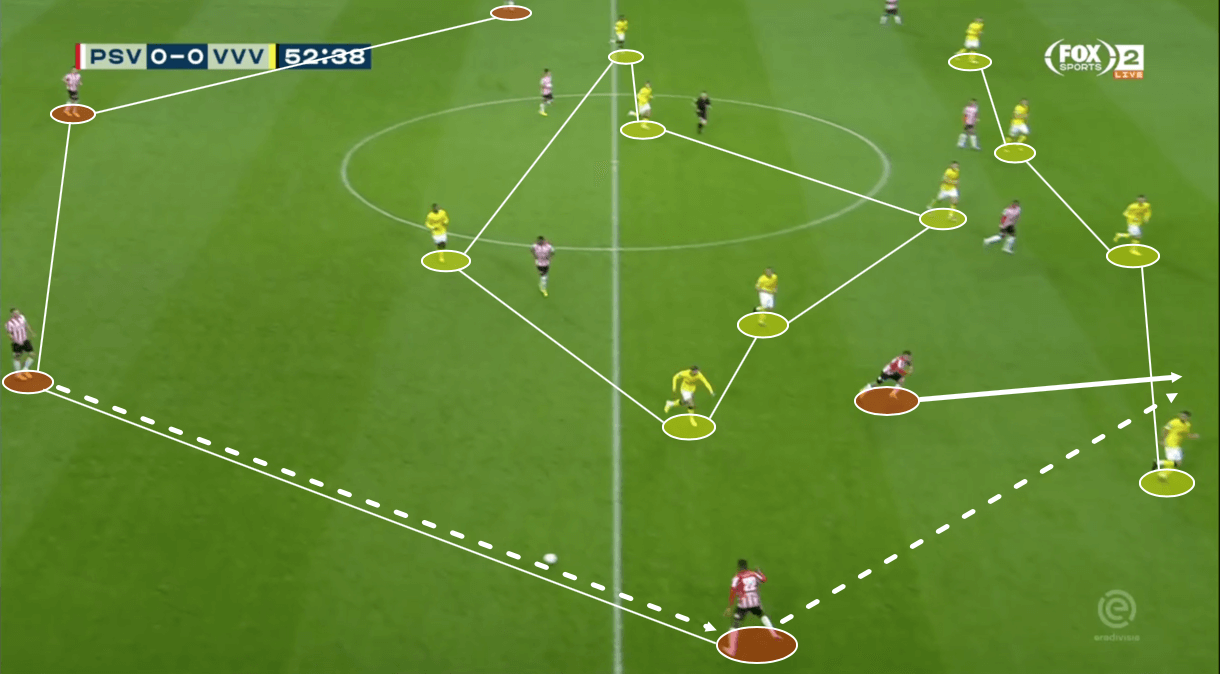 Finally, on the other end of the spectrum, Dumfries plays in extremely high areas on the pitch, as seen below. On a quick attack by PSV, Dumfries sees space in front of him open up with the right-winger Ritsu Doan tucked inside next to the striker Donyell Malen. 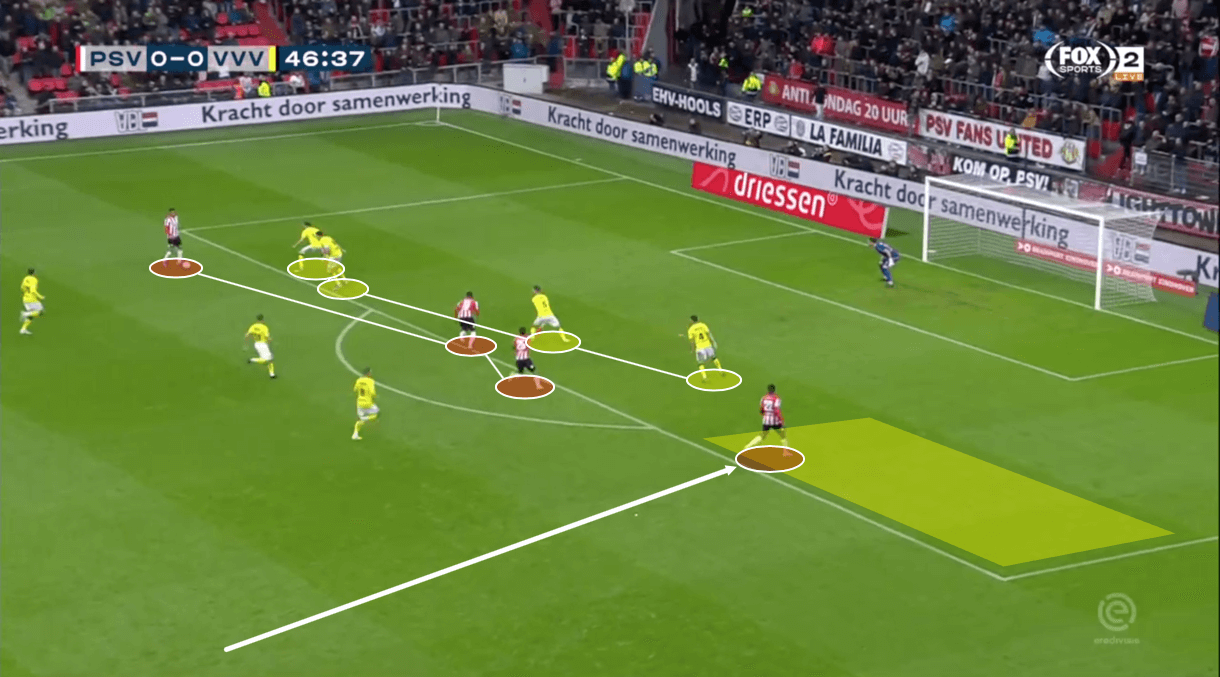 As a high-playing full-back in a possession-focused side, it’s not unusual that Dumfries’ passing radars, as seen below, show a significant amount of completed backwards passes. When he isn’t attempting these passes, he often looks to the central midfielders or front line attackers in the inside channels, with varying success. 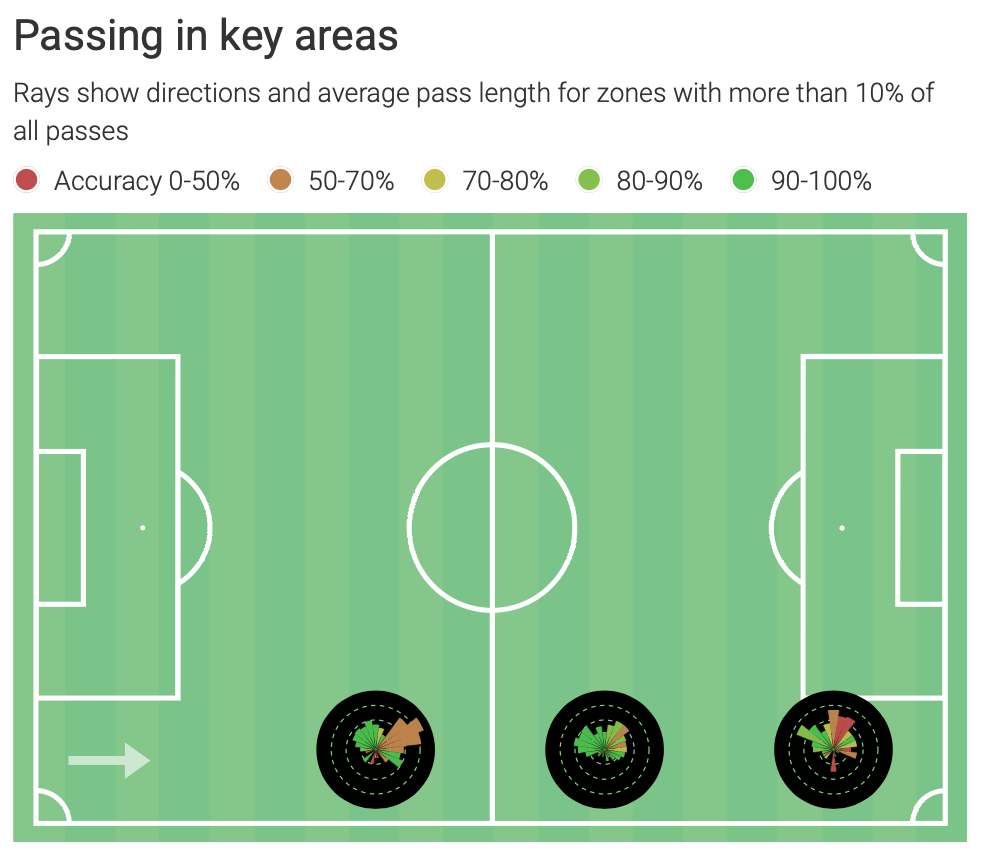 Dumfries is very active in the actions of a traditional full-back. Physically imposing with a height of 189cm(6’2”) and a weight of 80kg(176lbs.), Dumfries often utilises his strength, aggression, and frame to dispossess opposing attackers. Below, we see him press forward defensively. He creates a wide frame with his body which blocks off the wide passing lane, makes sure he is in control of his balance, then successfully dispossesses the attacker. 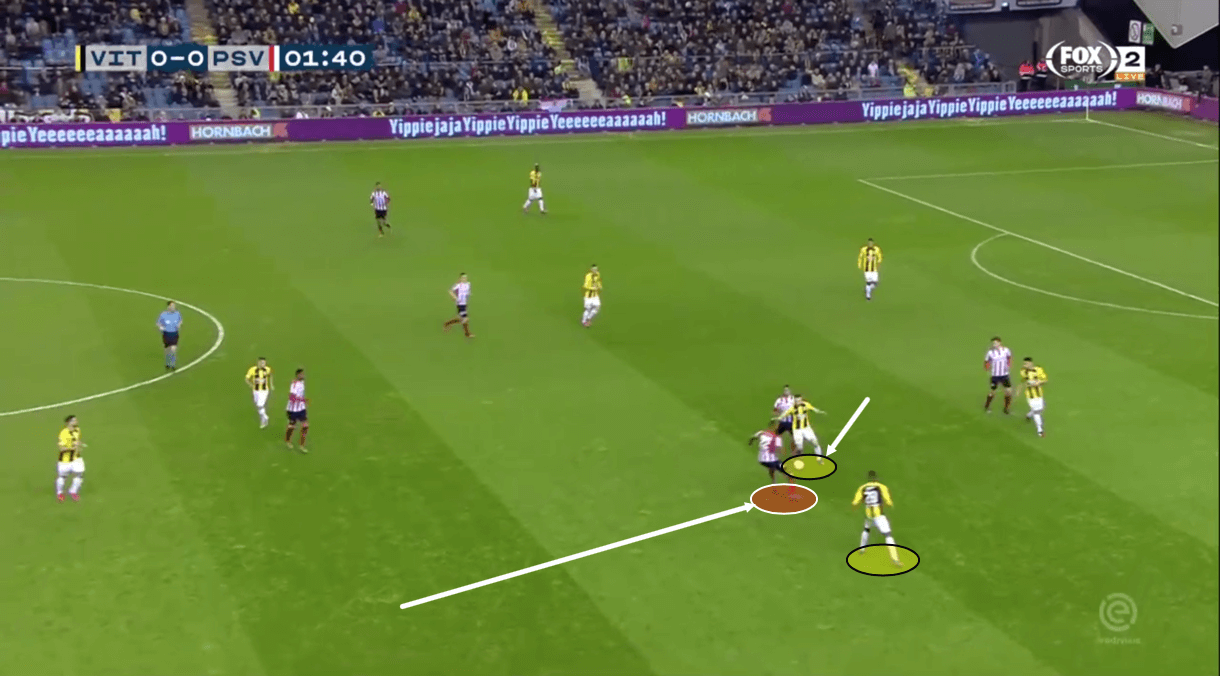 The next image is another example of Dumfries’ aggressive play. With the attacker dribbling down the touch line, Dumfries once again presses the ball directly while creating a large frame with his body to cut off the passing outlet behind him. 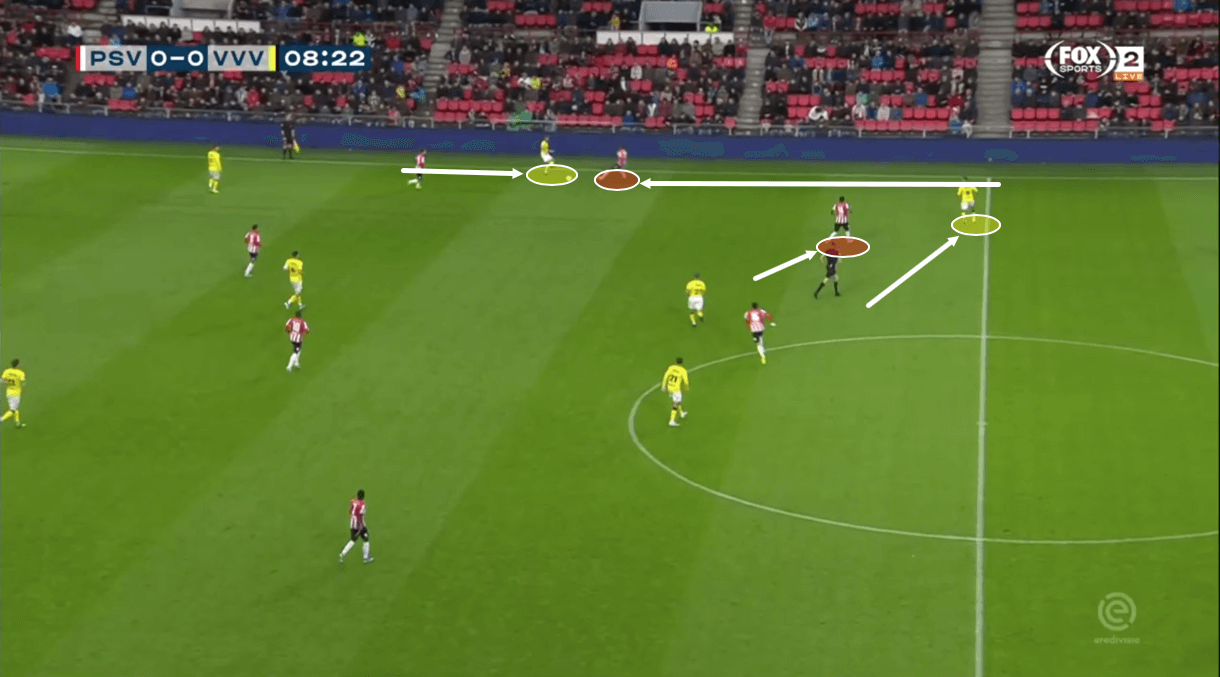 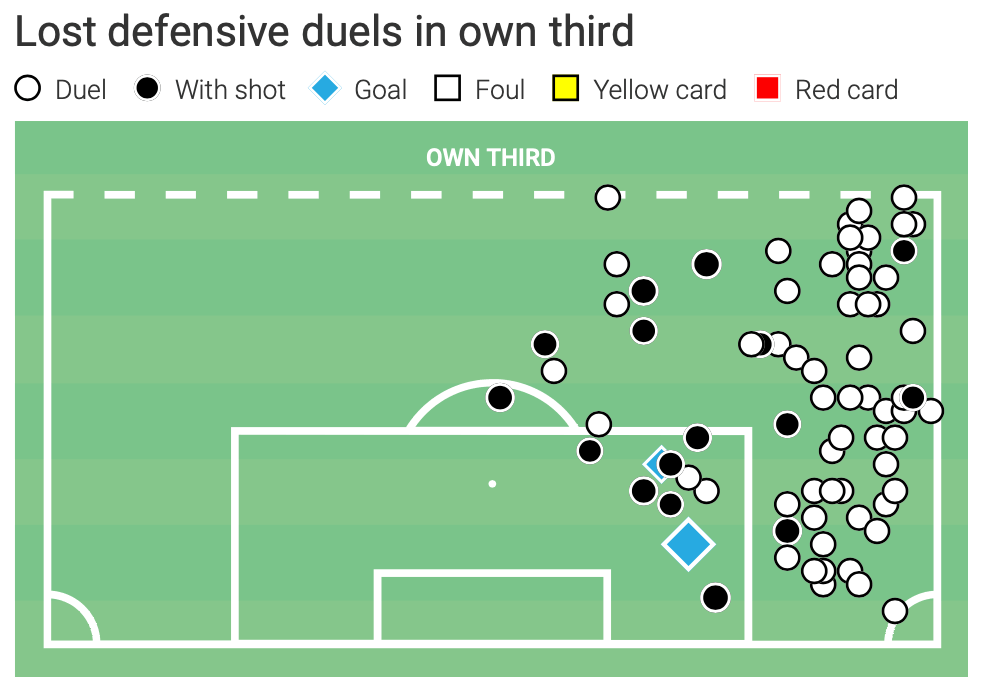 Furthermore, Dumfries will leave space open behind him on account of his high positioning. This often requires one or both of two solutions; either Dumfries tracking back quickly and managing to dispel the ball, or the right centre-back or right midfielder shifting over and covering that space. 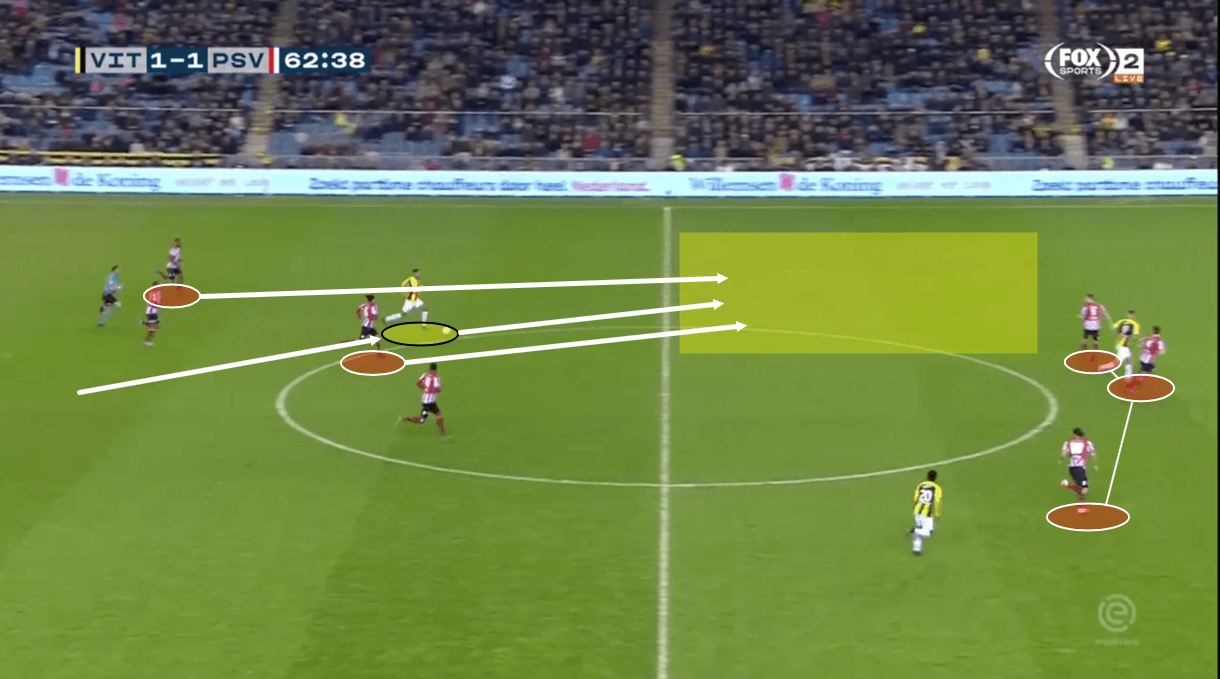 In this example above, Vitesse initiate a counter-attack and immediately attempt to access the open space behind Dumfries and next to the PSV back line. Fortunately for PSV in this specific case midfielder Érick Gutiérrez is able to catch up to and hold off the attacker long enough for Dumfries to track back and tackle the ball away.

Below is another instance in which Dumfries’ high stance allowed for a quick opposing attack. The opposing left-back stepped up to intercept an errant pass from a PSV midfielder and immediately initiated a counter-attack. Dumfries is slow in transition from attack to defence and leaves the space behind him open, providing the opposition with a good passing option. Here, the rest of the PSV defensive line successfully covers for Dumfries. Schwaab shifts over into the wide spaces to put pressure on the ball, and left centre-back Nick Viergever maintains the defensive shift by covering Schwaab’s space. 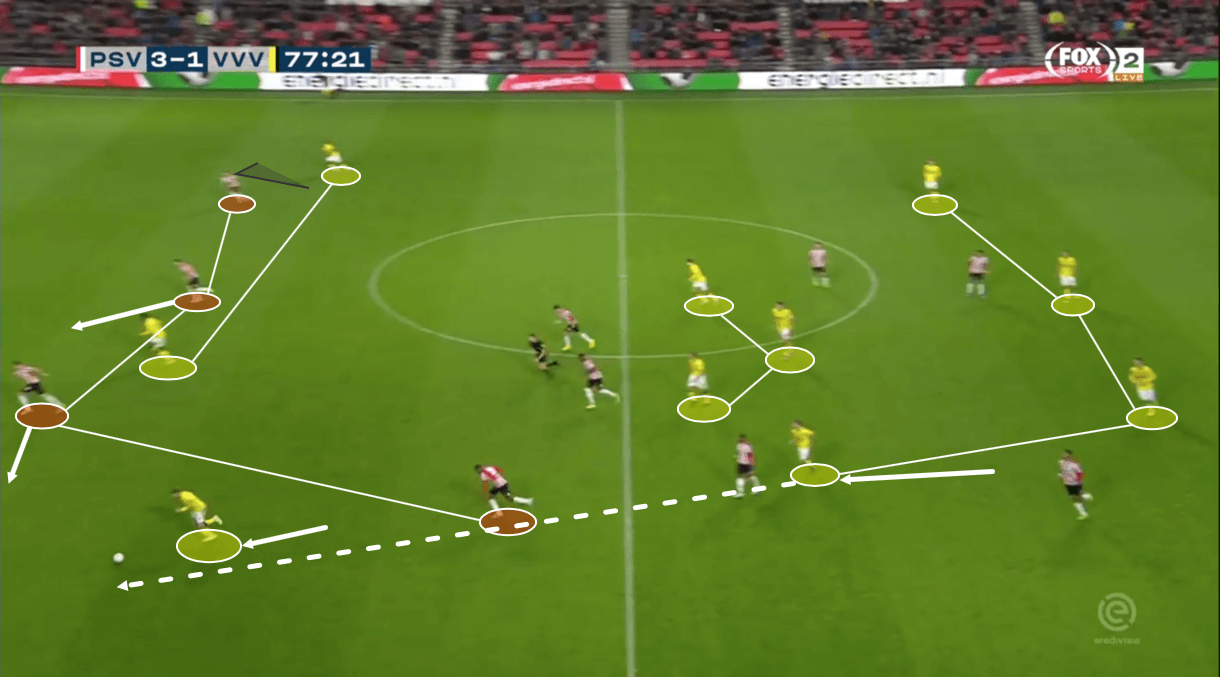 Despite moments of defensive skill from Dumfries, his lack of awareness of the space around him defensively can get his team into trouble if contingencies aren’t thought out. However, these contingencies aren’t unheard of, and a manager could certainly opt for Dumfries to stay high and instruct the backline and/or defensive midfielder to cover appropriately.

The reason for a manager choosing to go that route would be the argument that Dumfries’ positive attacking output is greater than his negative defensive output. The Dutchman is often a substantial force in attack, overlapping or underlapping the winger to move defenders. He is tied-15th of all Eredivisie defenders with an average of 1.2 key passes per 90 minutes and sustains an accurate 41.1% success rate on 73 total crosses in the final third. His advanced progression participation charts below compared to other league defenders also provide a view of his offensive effectiveness.

Another example of Dumfries’ aggressive mentality in attack can be seen below in a well-envisioned pass. After receiving the ball, he notices his attacking teammate Steven Bergwijn moving wide. Bergwijn’s movement not only creates a passing option for Dumfries but also pulls the opposing left-back wide, creating a long passing lane for Dumfries to connect with the ball-side front attacker in the open gap in the opposing back line. 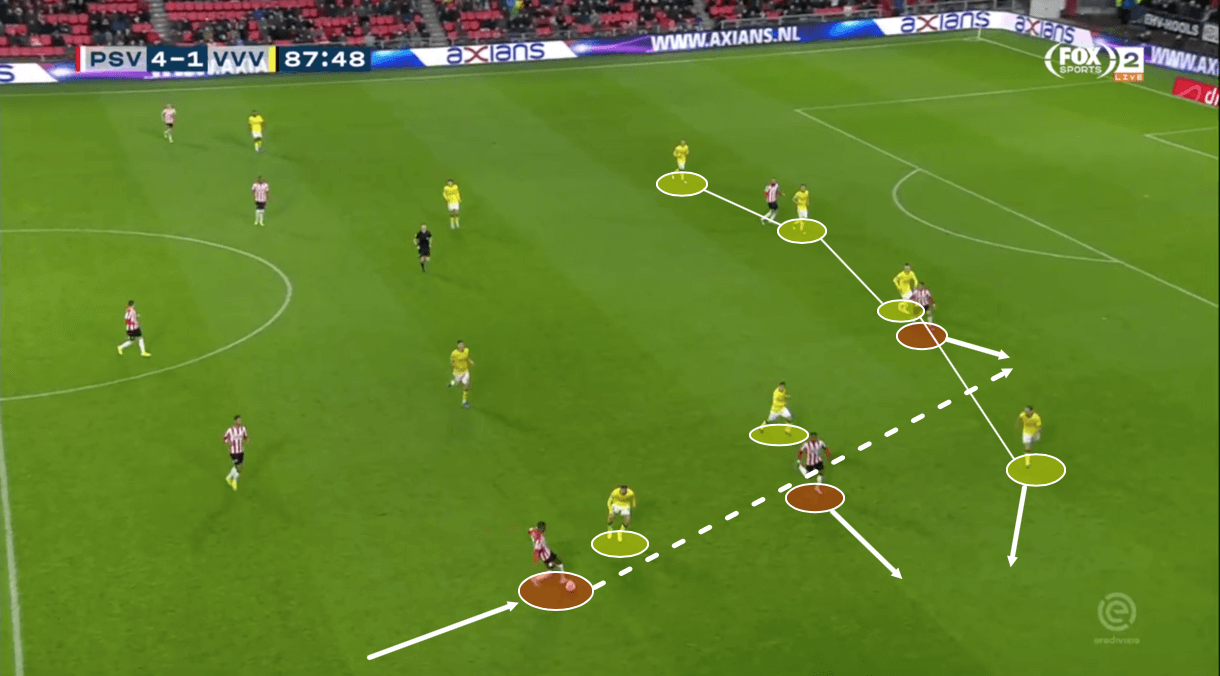 There are however a couple concerning moments involved in his attacks, specifically in ball retention. As previously mentioned alongside the passing radars, Dumfries has varying success when it comes to forward passing. Also, while he currently boasts a high average dribbles per 90(ninth of all Eredivisie defenders with 3.57), the successful percentage of those dribbles is somewhat less desirable. 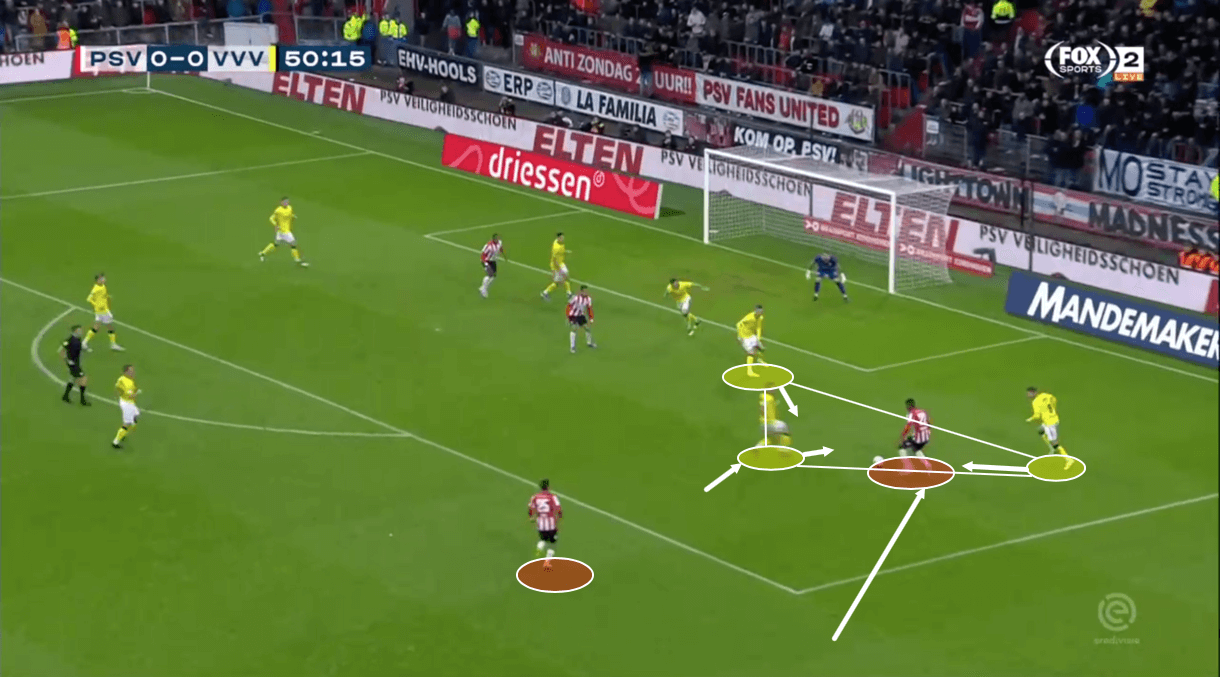 In the sequence above, Dumfries received the ball in a smart, attacking position and dribbled into the box, but instead of passing back to an open passing outlet, he dribbles into three defenders and loses the ball.

The area of attack in which Dumfries does excel is the final execution when he does manage to hold onto the ball. He frequently is able to cut inside into the opposing box (he rarely cuts inside any farther back on the pitch) and complete strong, accurate shots, impressive especially for a defender. Notice in the successful dribbles chart below that a high number of the dribbles in the final third end with a shot by Dumfries. In fact, eight of these 16 shots Dumfries attempts after the dribble were on target. 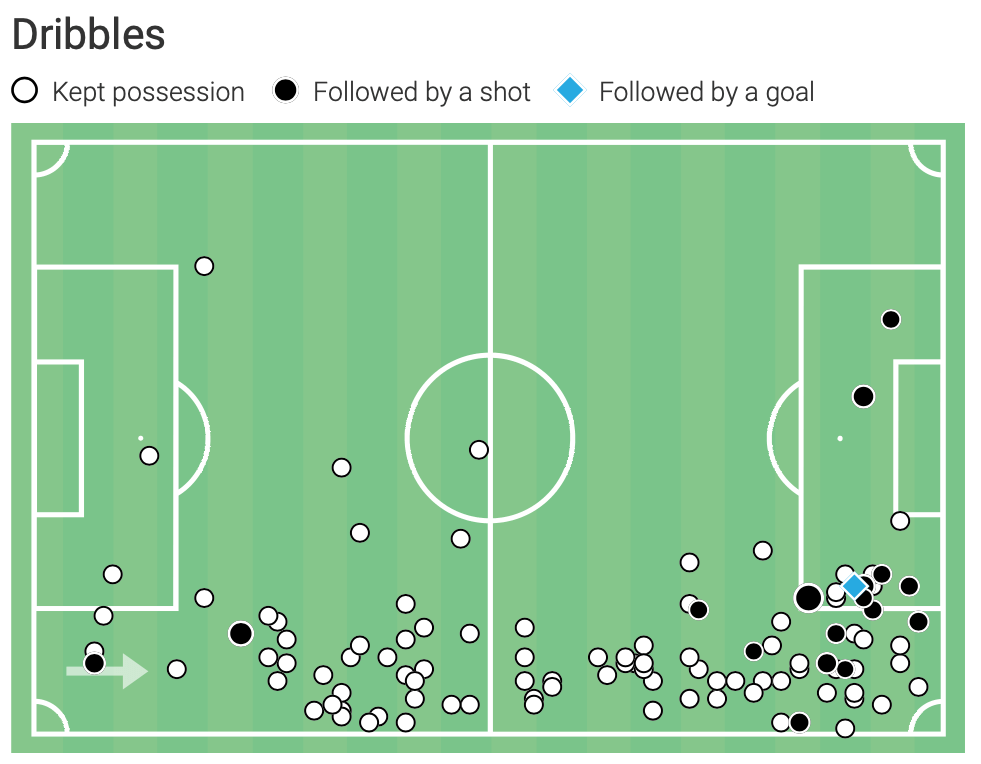 In the scenario below, Dumfries overlaps the winger and makes a run into the box. He receives the ball and uses his strength and ball control to hold the left-back at bay. The left centre-back then hurriedly moves over to pressure Dumfries, accidentally forcing a penalty drawn for the PSV full-back. 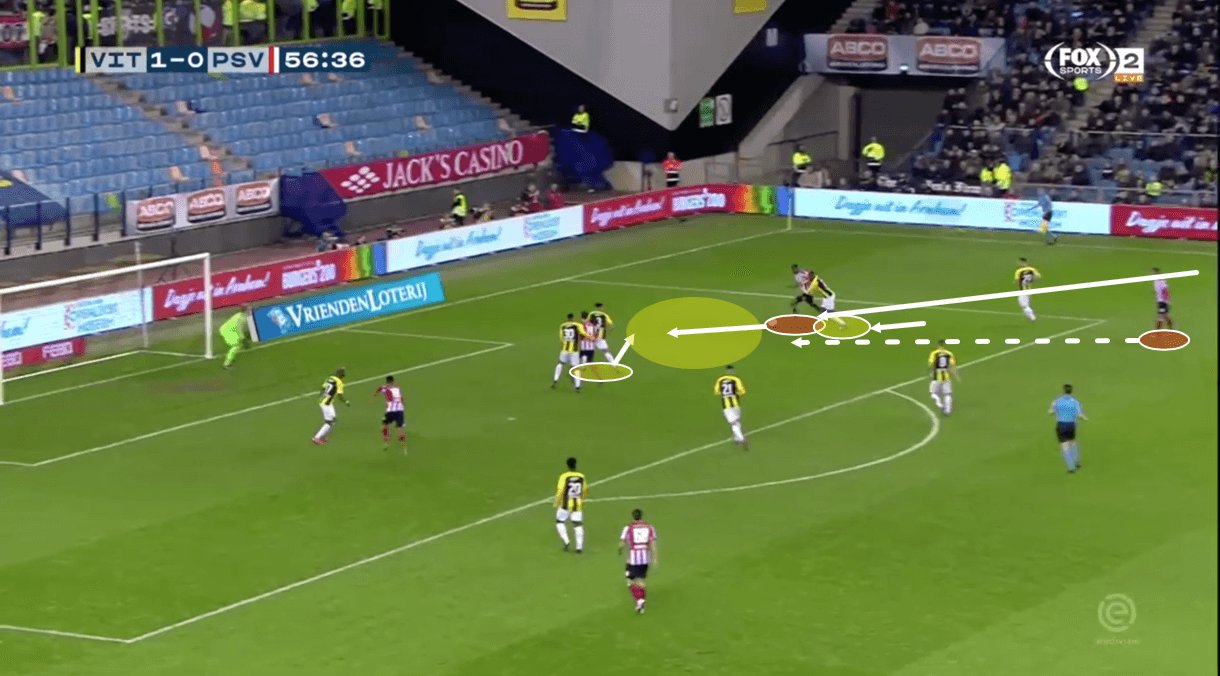 Moreover, Dumfries led all defenders in the Eredivisie this season with seven goals. Dumfries uses his physique and aerial ability in both defence and attack, scoring six of his sixteen career goals using his head. He is typically the primary target for PSV on designed corner kicks and set pieces into the box. In the set-piece below, two PSV teammates shift to open up space for Dumfries: one moving towards the corner, the other moving towards the six-yard box. Even though this design failed to lure two defenders away from Dumfries, he still managed to out-jump both men marking him and hit a headed shot on target. 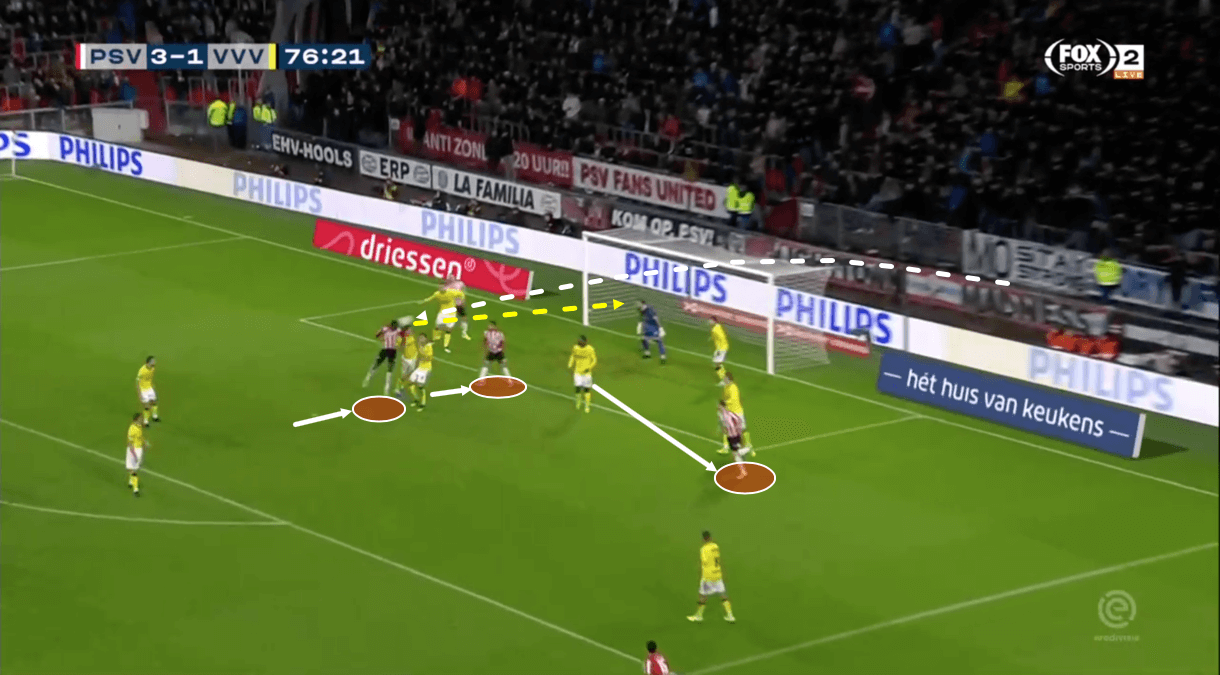 Continuing with Dumfries’ offensive dominance, his advanced statistics regarding the final actions also bode well overall for a full-back. His 5.96 total xG and 0.27 xG per 90 minutes along with a respectable 0.16 xG per shot on an average of 1.44 shots per 90 minutes prove his efficiency in finishing.

The Netherlands have proven to be one of the stingiest national teams to face in recent years. Under manager Ronald Koeman, they have an impressive 43:18 goal ratio — a +25 goal differential in just 20 matches. Dumfries has been one of the more undervalued cogs in the orange machine’s recent success.

One of the more memorable moments of Dumfries in the orange shirt came in a group stage match against Germany in the 2018 UEFA Nations League. Dumfries, earning his first-ever start for his country, effectively shut down Timo Werner on the wing, successfully preventing any shots, key passes, and dribbles attempted from the German attacker.

In this sequence, Werner has just completed a pass centrally and attempts a run into the box. Dumfries’ excellent man-marking, along with De Ligt’s, prevents a quick one-two passing action from the opposition, with Dumfries blocking the vertical passing lane to Werner by maintaining his position between the ball and his man. 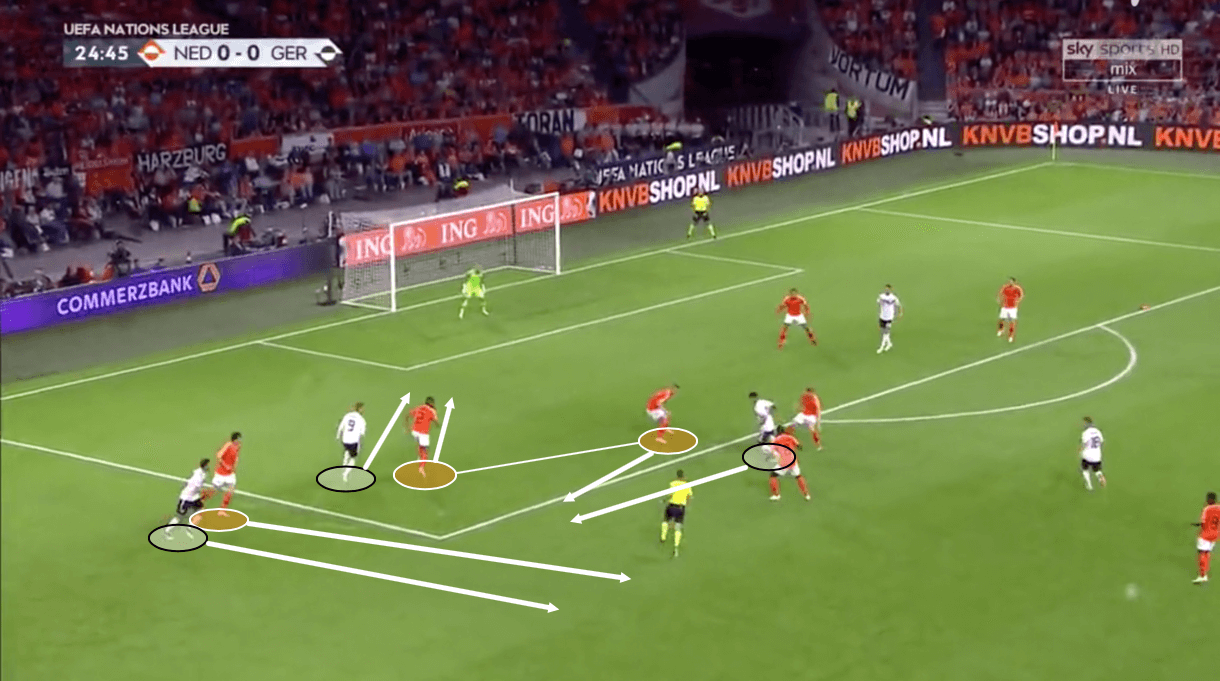 Both defenders continue to follow their respective opposing player, with Werner tucking inside and De Ligt’s mark, Emre Can, continuing his attempt to find space by shifting wide. These movements are also a prime example of totaalvoetbal- the Netherlands’ signature tactics emphasising the recycling of players’ positional movement- with Dumfries and Juventus‘ De Ligt temporarily swapping positions. 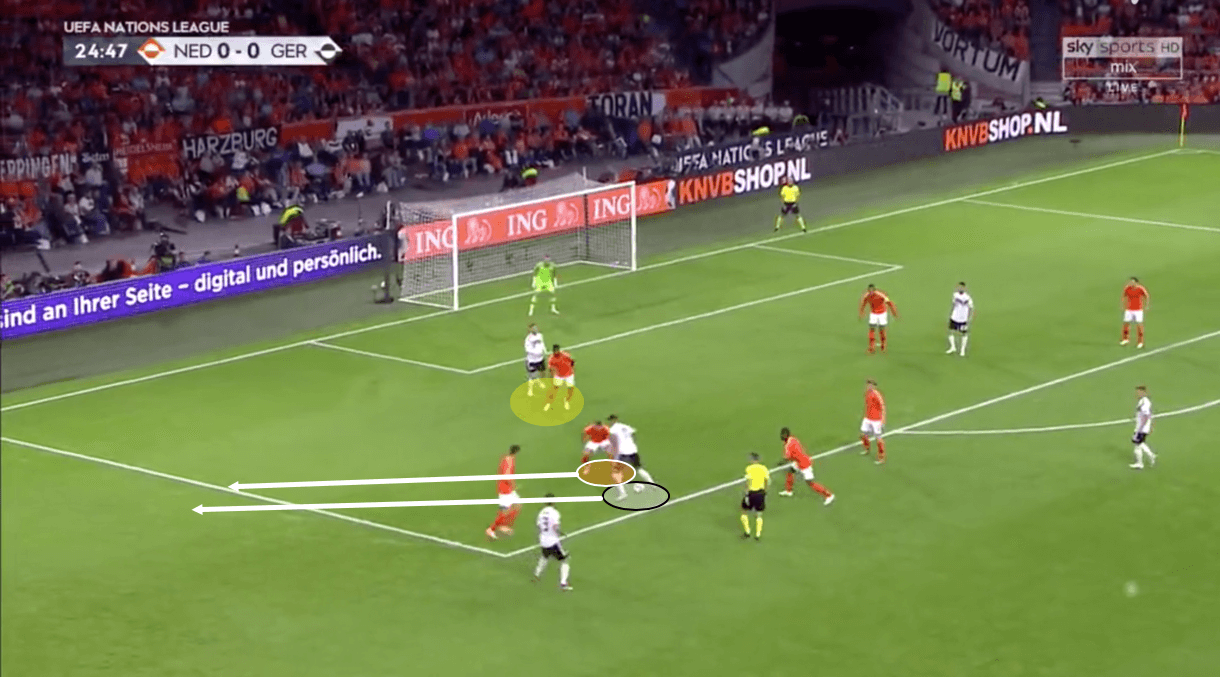 De Ligt’s successful pressure against Can forces the midfielder into a backpass, which is intercepted by the high pressure by the Netherlands. Dumfries recognises this and quickly transitions from defence to attack, receiving the one-touch pass in the wide area and progressing the ball down the pitch. 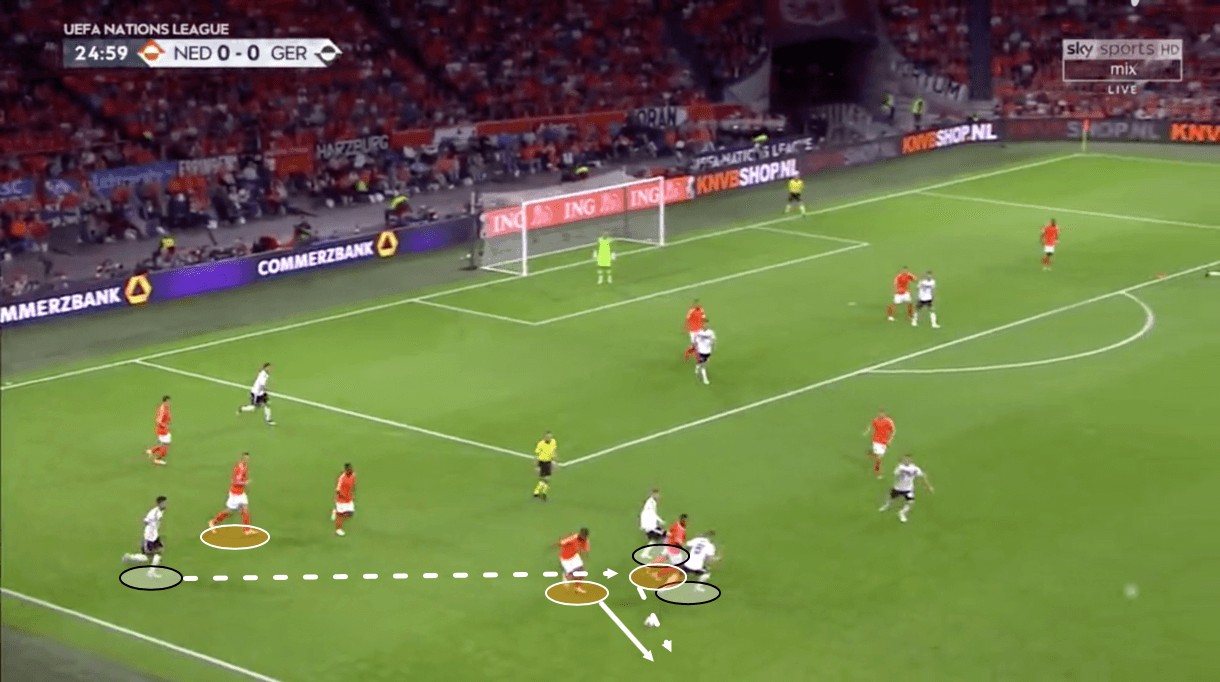 Dumfries, who has played (and scored) for the Aruba national team in friendlies after receiving a call-up from the Caribbean side while playing for amateur club Barendrecht, has seen his time with the national team dwindle recently, but Koeman would be remiss to not consider Dumfries again with evidence of his capabilities via his club play.

Ultimately, Dumfries is an intriguing type of full-back. He fits the mould of a modern, attacking right-back, with a statistical output occasionally indicating quantity over quality. While a few of these analysis figures suggest room for improvement in certain areas, his energetic style of play is visually appealing and has the potential for significant effect as proven by his xG, shot frequency, and key passing statistics. With the prime years of his career in front of him, Denzel Dumfries could become a valuable asset to a club looking for a dynamic, forward-focused right-back.