Before getting into the data analysis itself, it’s worth having a look at the Segunda B division in Spain. It’s the third division, but it’s not officially professional – though almost all its teams are anyway. It’s formed by four groups of 20 teams each, divided in regions and with B teams allowed to participate and even get promoted to Segunda División.

The huge amount of teams and players make Segunda B a difficult competition to scout, so data analysis is a great tool to get an idea of who the best players are. In this series we will analyze the players of La Liga B sides who are currently playing in Segunda B. These teams are Alavés, Athletic Club, Atlético, Barcelona, Celta, Espanyol, Getafe, Granada, Levante, Osasuna, Real Betis, Real Madrid, Real Sociedad, Sevilla, Valencia, Valladolid, and Villareal. Only Eibar, Leganés, and Mallorca have their B sides playing below the third division, and there’s almost no data for those leagues. For this analysis, we are taking only U23 players who have played at least 900 minutes this season.

In this first part, we will be having a look at central defenders. The centre-back position is probably the one that takes longer to develop, apart from the goalkeeper one. Young centre-backs who dominate the game are rare as the position requires much more consistency than others and any mistake can be match-defining. There are 48 centre-backs in Segunda B who play for a B side and have been on the pitch for more than 900 minutes, and we will try to highlight the best of them using statistics. 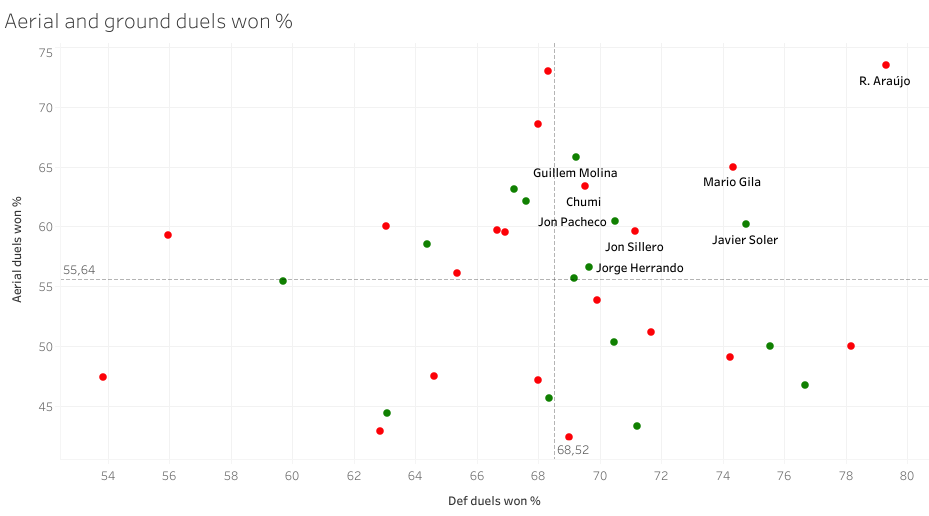 The first thing we are looking at in this analysis is the centre-backs’ ability to win duels, both in the air and on the ground. The advantage of these metrics is that they are not directly affected by the team playing style, so they are more useful to compare between very different tactics. For extra context, total successful defensive actions per 90 are represented by the colour, with green meaning it’s above average and red the opposite.

We highlighted the players who win more duels than the average both on the ground and in the air. 21-year-old Ronald Araújo from Barcelona B stands out from the rest being the number one in both metrics, winning 73.47% of the aerial duels and 79.31% of the ground duels. Barcelona B’s attacking style means he’s involved in less defensive actions, so his total successful defensive actions are below average

Far from Araújo but ranking very highly in both stats we find Real Madrid Castilla’s Mario Gila. The 19-year-old defender shows a nice balance between winging duels on the ground (74.34%) and in the air (65%) and has recently signed a new contract with Real Madrid and could make his first-team debut soon. Same as Araújo, Real Madrid Castilla try to play attacking football so he’s not involved in a lot of defensive actions. 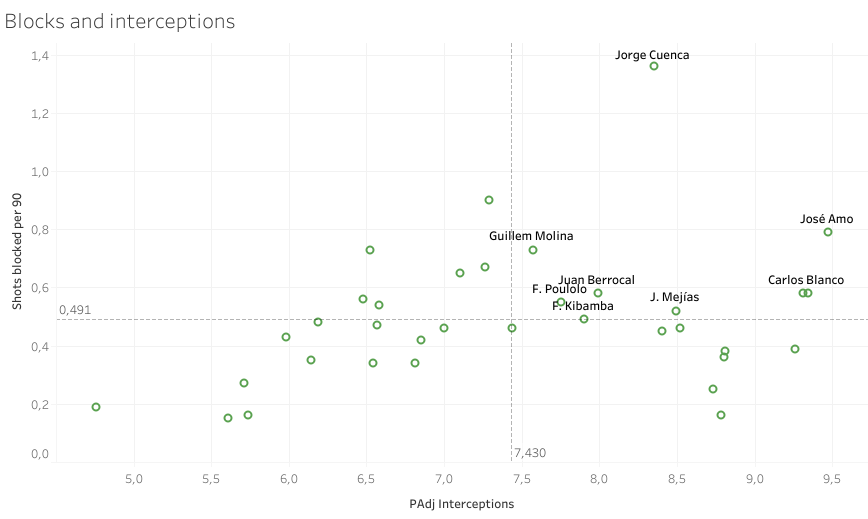 This second chart is useful to measure how the centre-backs use their positioning to recover the ball. On the X-axis we see possession adjusted interceptions, which measures the interceptions per 90 but considering how much time the player’s team is out of possession, so it’s better to compare between players in different playing styles. In the Y-axis we have shots blocked per 90, but without being possession adjusted.

There’s not a clear outstanding player in both metrics. Jorge Cuenca, the 20-year old Barcelona B and Spain U21 left centre-back, is the best in shots blocked with 1.36 per 90, but he’s only a little bit above average in possession adjusted interceptions with 8.35 per 90.

On the other side, José Amo (22 years old, Sevilla and Spain U21) is the best in possession-adjusted interceptions with 9.47 per 90 while also ranking well in shots blocked with 0.79 per 90.

Both of the players mentioned in the “winning duels” part of this analysis rank very well in shots blocked – Araújo is second with 0.9 and Gila is seventh with 0.65 – but both of them are below average in possession adjusted interceptions. 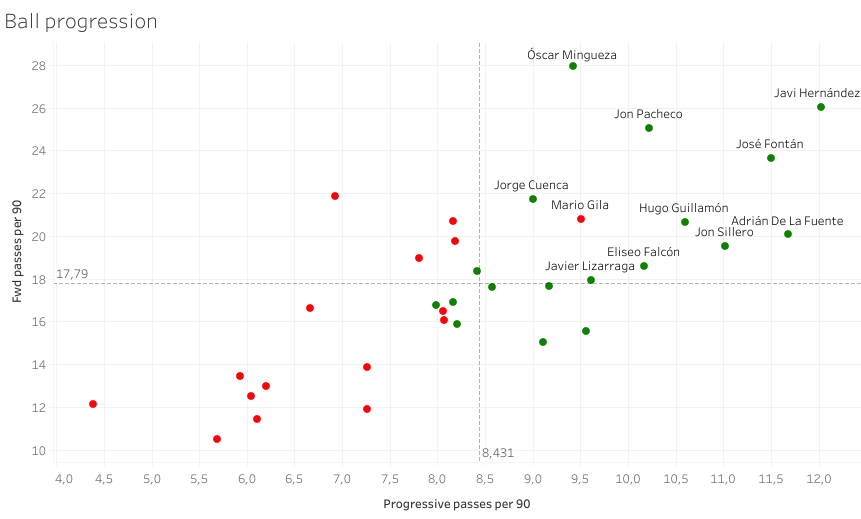 While not being an essential part of their trade, a centre-back’s ability to progress the ball is highly valued in today’s game. We have focused on three measures here: forward passes (Y-axis), progressive passes (X-axis) and passes into the final third (green means above average and red the opposite).

There’s, of course, a lot of dependency between the three measures, with all of the progressive passes and passes into final third being forward passes, but they are useful to tell how aggressive the players are when playing from the back.

Óscar Mingueza from Barcelona B is the first player we highlight here. The 21-year-old centre-back makes 9.12 final third passes per 90 (second best), 27.97 forward passes (best), and 9.42 progressive passes (above average). He’s the best Barcelona B centre-back in terms of ball progression, which is a great feature considering the club’s playing philosophy.

Real Madrid Castilla’s Javi Hernández is another great passer with 26.05 forward passes (second best), 12.02 progressive passes (best), and 8.35 final third passes per 90. His stats are a bit exaggerated because he has played some matches as a full-back, but he’s still a good one to follow.

Ronald Araújo (21, Barcelona B and Uruguay U20)

When looking at defensive stats, Araújo is the obvious winner. The Uruguayan defender is a monster in individual duels and it’s because of that that he’s expected to get into Barcelona’s first-team squad next season. Winning well over 70% of the duels in the air and on the ground, his transition to La Liga should be smooth in terms of physicality and he could perform from the first minute.

He’s also great at blocking shots, ranking second in this stat, and his interceptions are just below average but not bad at all. However, he’s not as good on the ball as one could expect from a Barcelona player. He’s below average in ball progression and he should look to improve this to have a long term future at the Catalan club.

Araújo’s partner is a perfect complement for him. Cuenca is a great ball-playing centre-back, ranking above average in the three ball-progression metrics we considered in our analysis. He makes 9 progressive passes, 21.73 forward passes, and 7.09 final third passes per 90.

On the other side of El Clásico rivalry, Gila is a very complete centre-back. He’s outstanding in duels, ranking well above average in terms of winning rate both in the air and on the ground. Like Araújo, Gila is good at blocking shots but below average in interceptions.

However, Gila is much better than the Uruguayan on the ball. He’s not fantastic, but he’s well above average in terms of progressing the ball, with 9.51 progressive passes and 20.8 forward passes per 90. But he’s not the most creative centre-back, and his 5.69 passes into the final third per 90 are below average. Gila has already signed a long term contract with Real Madrid but he’s not expected to make the first team shortly.

Outside the two La Liga giants, Molina is a centre-back who stands out for his complete and solid style. He’s above average in winning duels in the air (65.79%) and on the ground (69.23%), and unlike the previous three players, he’s also involved much more in defence with 10.17 successful defensive actions per 90. He’s also above average in interceptions with 7.57 per 90 and shots blocked with 0.73 per 90.

He’s not the most creative on the ball, with only 16.76 forward passes and 7.98 progressive passes per 90, both a little below average. But when he passes forward he does this very aggressively, making 6 final third passes per 90, which is above average. Molina has already made the bench of the first team in the UEFA Champions League and is expected to make his debut soon.

Segunda B is a difficult league for a young centre-back. The experience of the opposition strikers, usually older players used to play in lower leagues, is a great test for these young defenders and not all of them can pass it.

We have highlighted some of the centre-backs who seem to be imposing themselves at this level, showing no significant weaknesses while having different strengths each. Their first-team experience should be close now and it will be interesting to follow their careers in the next few months.