Last season, Bodø/Glimt were the surprise team of the Norwegian Eliteserien. This season they have continued to improve despite losing key players. Amor Layouni went to Pyramids FC in the Egyptian Premier League and Håkon Evjen to Eredivisie side AZ Alkmaar.

Next season, Glimt will have to rebuild once again. They have already lost Jens Petter Hauge to Serie A side AC Milan and Philip Zinckernagel’s contract runs out on New Year’s Eve. Several other players have caught the eye of foreign clubs with the club having plenty of young talent impressing. There is a good chance more than one bid will come in during the January window.

Their offensive displays have received praise and deservedly so. They have broken record after record in Norwegian football and are likely to still set new ones; with nine games left to play, they are 15 points away from the points record and 16 goals away from the scoring record.

An aspect of the team’s tactics that should be looked at in more detail is their defensive phase. How Bodø/Glimt approach the game without possession is the topic of this tactical analysis. The first section of the analysis will explore the defensive structure and counterpressing of the team, while the latter part will take the form of a scout report and look at how the team behaves in the high and medium block.

Until the most recent matches, Bodø/Glimt kept mainly to the same starting eleven. The only changes that were made from week to week were in case of injuries or suspensions. Joshua Smits, the goalkeeper who started the season in goal, was injured after ten matches. Nikita Khaykin took the place and has since kept it.

The back four sees the centre-back pairing of Brede Mathias Moe and Marius Lode. Marius Høibråten has been available all season to step in when needed. The full-backs are Alfons Sampsted on the right and Fredrik André Bjørkan on the left.

The midfield trio has been the most consistent part of the team. Ahead of the deep-lying playmaker Patrick Berg, Sondre Brunstad Fet and Ulrik Saltnes take up the number eight positions. The most used front line is Philip Zinckernagel on the right, Kasper Junker in the middle and Jens Petter Hauge on the right. 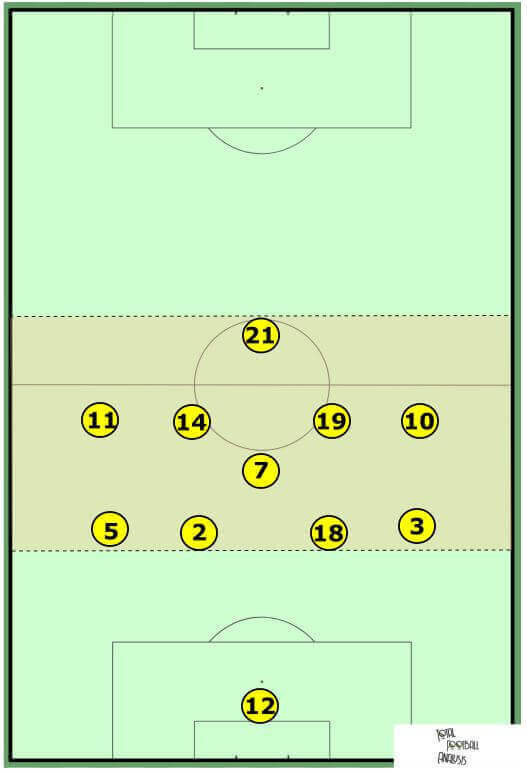 As this analysis’ focus is on the defensive side of their play, the line-up visualisation above shows what the team look like when they are defending and there is no pressure applied to the opponent.

To continue the visualisation in the previous section, it shows the team in a medium block. The specifics of the medium block will be further examined later in the analysis. For now, the general trends in their defensive structure will be looked at. Regardless of whether the team is in a medium or high block, some things are common.

Bodø/Glimt stay very compact in their defensive phase, often prioritising giving up width on the flanks. They work hard to ensure that the opponent’s play is also targeted to the flanks, and this is further strengthened by player movements in defence. 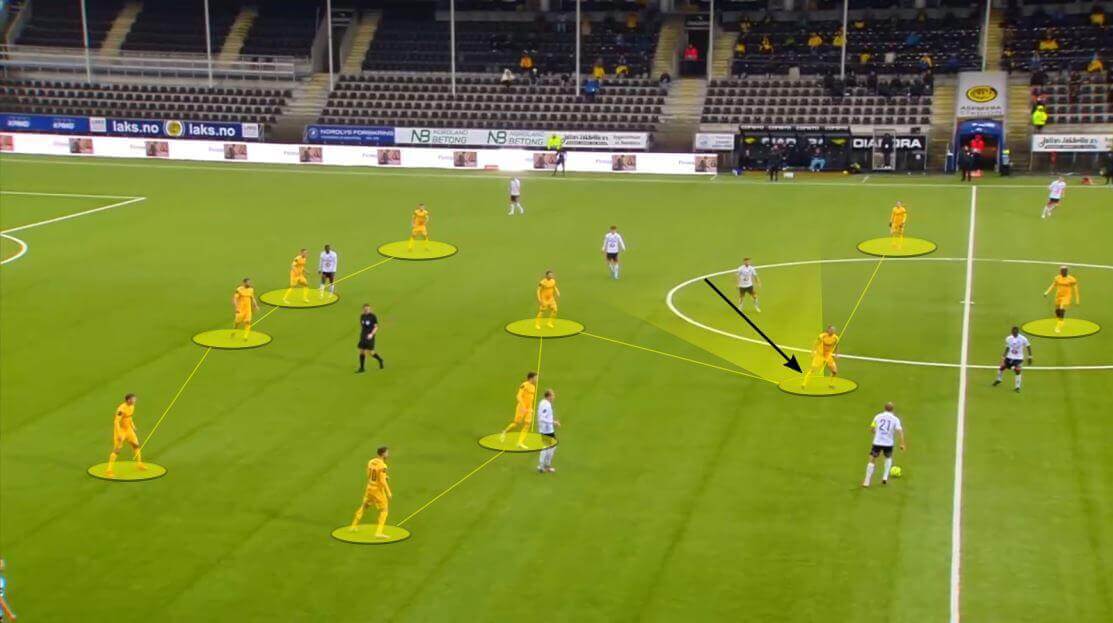 Often, the starting structure is in a 4-1-4-1 as again seen above. Changes do of course occur. That said, it is rare that they stay in this shape for more than a second or two. One player from the midfield line will most often push up to support the striker and encourage play away from the middle, not unlike how Kevin de Bruyne has often acted for Guardiola’s Man City.

Here below, Brunstad Fet in central midfield is the player to Join Junker in the first line of pressure. Other times it can be a winger doing it, or at rare times Berg in defensive midfield. What is common for all these scenarios is that the remaining four in midfield will quickly shift to form a flat four behind the first line. 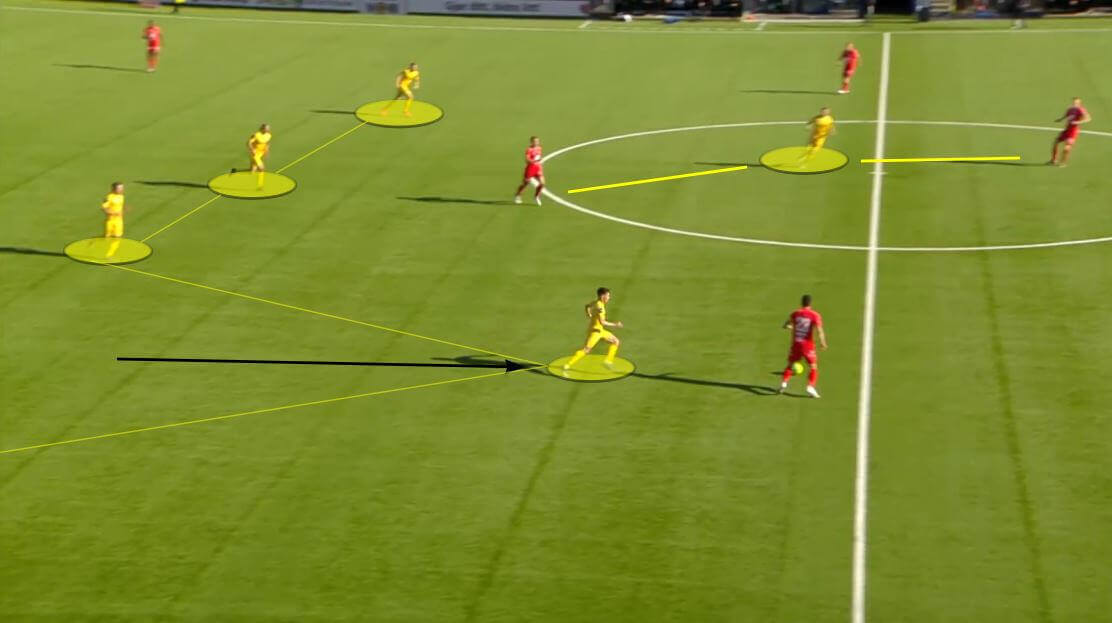 Before going into how they specifically behave in organised defence, it is valuable to examine counterpressing situations. This will play a large part on the rest of the defence, as it is hard to really present a clear distinction between a defensive transition and organised defence.

For simplicity and clarity, this analysis will use the Wyscout definition of a counterpressing situation. That is, whenever a pressing situation occurs immediately after losing the ball and lasting for five seconds.

Examining the counterpressing will also be split into two smaller sections. Firstly, the behaviour of the player in the intervention zone. This is the smallest area and usually involves a 1v1 where the first defender presses the ball carrier. The intervention zone is marked by the deepest red colour below.

The run of the pressing player is often angled, so he can focus his pressing from one side. This makes the process easier for the teammates as well, as they can effectively worry about less space on the pitch. Pressing head on would potentially open up space for bypassing the pressure on both sides. 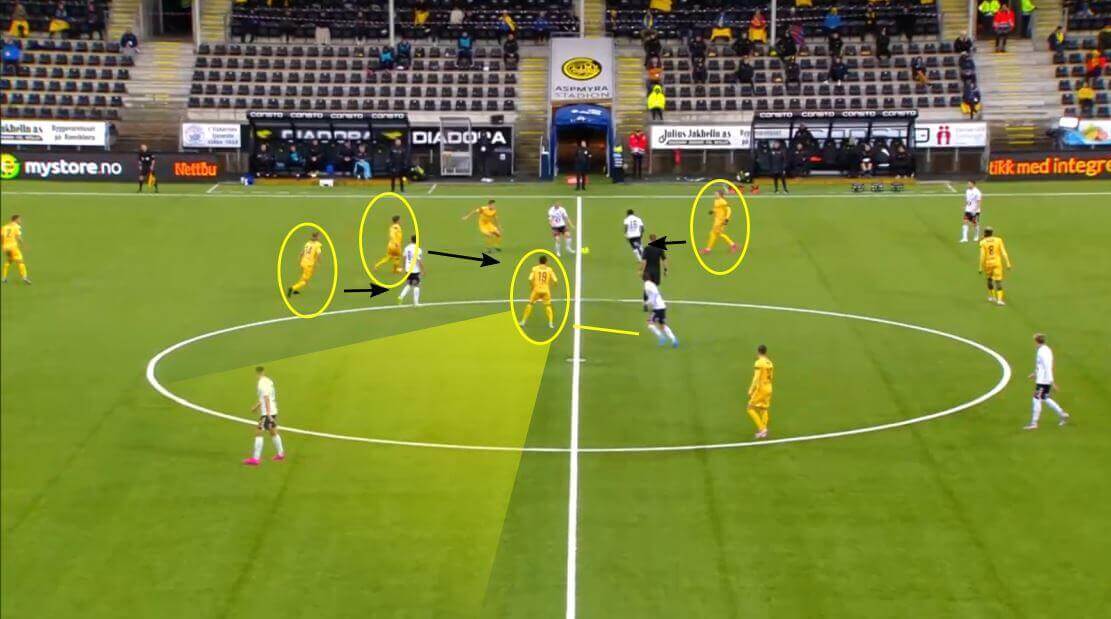 In the image above the players in the direct cooperation zone are marked in yellow circles. The situation is similar to the one above and again it is visible that a clear priority is to target the options of the ball carrier.

The players in the indirect cooperation zone when talking about the defending team is mostly the rest defence. In Bodø/Glimt’s case, they will generally create a bit more depth, being ready for the long ball in case it should come. The remaining players that are not part of the rest defence could be a winger or striker intentionally left higher in the field. This is to take advantage of a higher positioned player if they can counterattack.

Two metrics that can be used to gauge how aggressive or intense a team is in their pressing, and hence their intention to win the ball back quickly, is passes allowed per defensive action (PPDA) and challenge intensity. Challenge intensity is a measure of how often the team is actively trying to recover the ball. PPDA is the number of passes completed by the attacking team divided by defensive actions by the defensive team.

While challenge intensity then is how often the team is trying, PPDA can be used to present a picture of how successful those actions are. When looking at Bodø/Glimt in these two metrics, compared to the rest of the Eliteserien, they are second in challenge intensity (6,9) and third in PPDA (9,86). This suggests that not only are they actively trying to win the ball, but they are also successful with it. 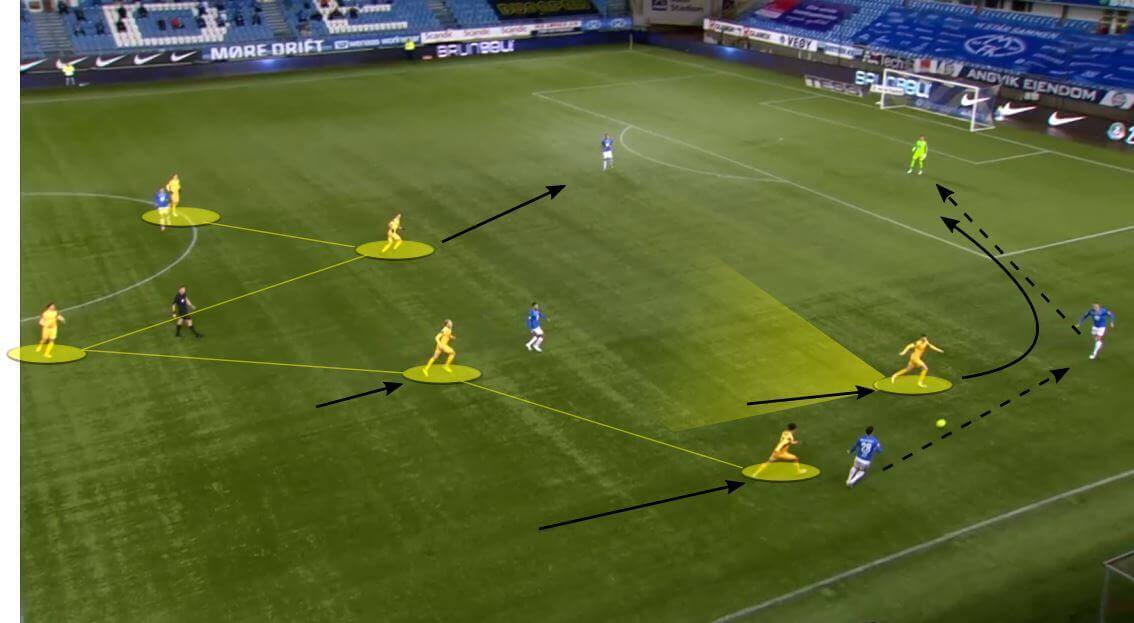 Where it really shows is when the team deploys their high block. When pressing from a high block they will often resort to a more man-oriented press. The image above shows how they in one situation approach this.

Here they have pushed the opponent firstly to the flank, and then an aggressive press on the ball carrier who is forced to play it further backwards. This is to the centre-back in this case, and then Bodø/Glimt striker follows up and forces another ball back to the keeper. While this is happening, the rest of the front five are marking out the options for switching play, and thus force a long ball from the keeper.

When looking at a team in video, it is impossible to deduct with 100% certainty which triggers the team use to press by. What can be done is to look at what they often do, and work from that.

Bodø/Glimt seem to, among others as well, to press aggressively on backwards passes from the opponent. This is an opportunity to press “through” the lines and move the entire team higher in the field. An example of this can be seen in the image below. 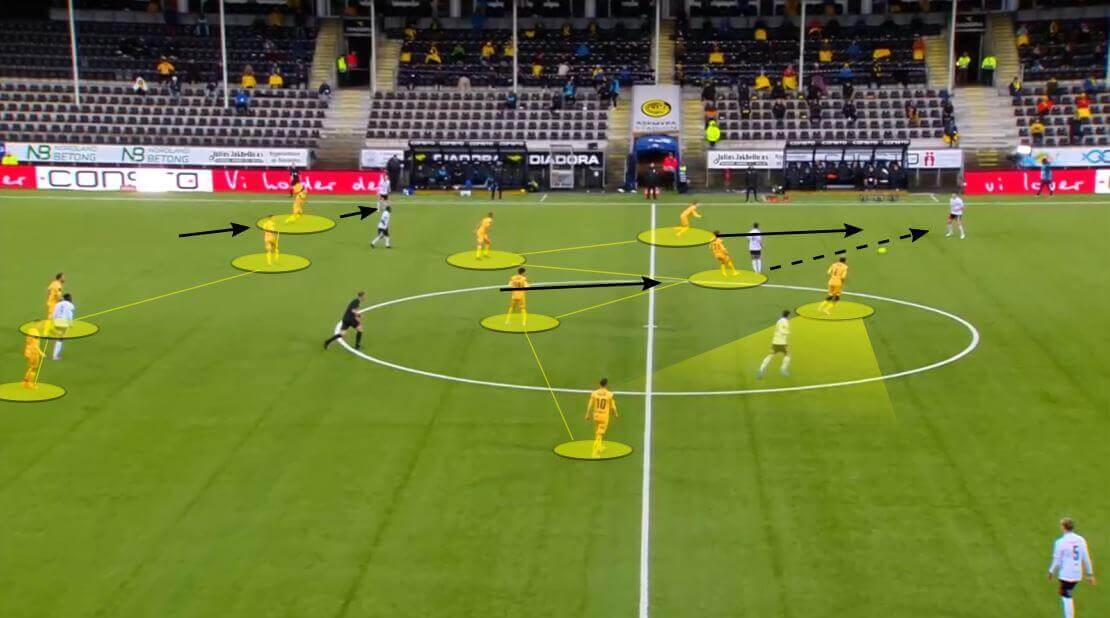 Other triggers that can be argued which they use to press are high switches of play. Then the opposite winger and full-back will often push hard out to prevent progression. A third one which seems to be more on the individual level rather than team level is to press a player with his back towards goal.

This last one is useful because a player with his back to goal often lacks an overview of a significant portion of the field. He then might be unaware of the press coming from behind, and the presser can then possibly create a counter-attacking chance.

In the medium block they behave a little different than in the high block. Often there is a lack of a definitive press and more that a player pushes out to prevent further progression. There is less active pressing than in the high block, and more shifting and shuffling from side to side. As mentioned in the beginning, one of the midfielders will push hard out to prevent a pass centrally, before dropping back in line again. 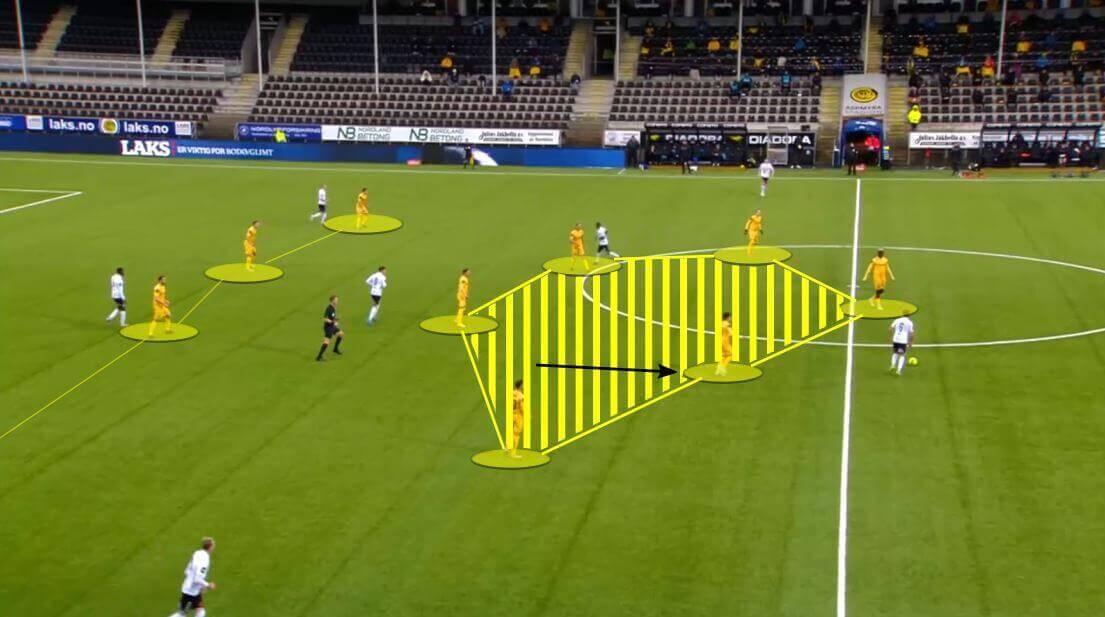 The image above shows exactly this. Here Brunstad Fet has again pushed out and joined the striker up top. He is not actively pressing or trying to win the ball, but rather denying access to the middle while the team is waiting for the right trigger to occur.

If the ball is further played backwards here, the striker will often follow up on that action and start the press from the medium block. If the pass is played more laterally, Brunstad Fet will drop back into midfield again, and Saltnes on the other side will push out.

Another active trigger for starting the press from the medium block is when the opponent winger or full back receives wide and the striker is close to put pressure on the eventual receiver of a backwards pass. Then the rest of the team will shift over and aggressively press the carrier. 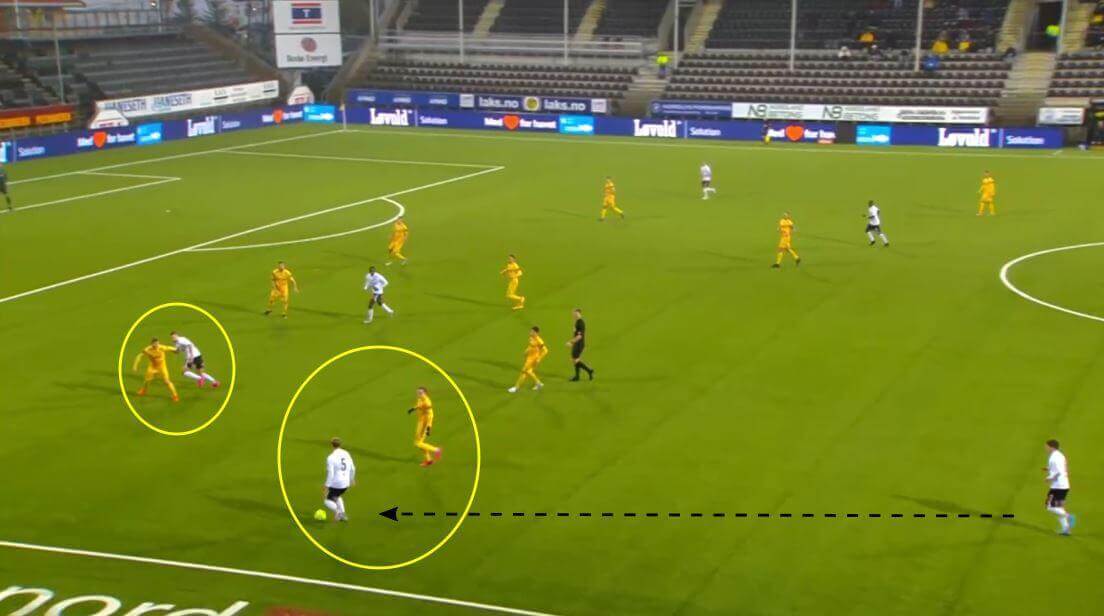 This image shows how the team shifts over to press the flank players of the opponent. This is a tactic that works well against Norwegian teams as many of them play with both the winger and full-back quite wide. This lets the winger who is pressing have a visual of both the player passing the ball and the full-back as the receiver. Then the pressing full-back pushes hard up on the attacking winger, while the pressing winger applies the same pressure to the full-back as seen here.

To conclude this tactical analysis, it is safe to say that Bodø/Glimt is a defensively effective team. They deserve a lot more praise for the defensive side of the game than they are currently getting. The head coach Kjetil Knutsen said earlier this season that he hopes they can be an inspiration to other teams in Norway, and as the basis if this analysis is the defensive side, the hope is also that he gets his wish with other teams also learning from their defence. 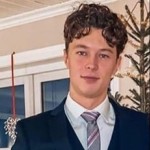