In the previous season of Serie A, Atalanta found themselves in the title race that was finally settled by Juventus. Many believed that Atalanta did not possess the ingredients to compete for the Serie A title, but coach Gian Piero Gasperini surprised everyone with the great level presented by his players throughout the season, whether by the team’s arrival in the advanced stages of the Champions League and competition for Serie A until the last breath. Indeed, he was able to book a seat in the Champions League for the new season by finishing third in the Serie A 2019/20 fixture.

But after this great performance that Atalanta presented last season, many are looking forward to seeing what Atalanta’s players have to offer this season, this tactical analysis will look at his tactics and analysis how they set-up for the next season. Through this scout report, we will see how Atalanta plans to challenge for the Serie A 2020/21 title.

Atalanta Squad and formations for 2020/21 season

Atalanta usually play in a 3-4-3 formation. Gasperini prefers to play with three center backs in his complex model that is always dependent on the positional rotation, interchange, and the high press. Gollini is always the goalkeeper, while the rest of the team alternates positions in the field according to Gasperini’s system; José Palomino, Rafael Tolói, and Berat Djimsiti are the usual center-back, Marten De Roon (formerly of EFL side Middlesbrough), Remo Freuler and Mario Pašalić rotate in the midfield, Robin Gosens, Hans Hateboer (formerly of Eredivisie side FC Groningen), and Timothy Castagne rotate as the wing-backs, Josip Iličić, Duvan Zapata and Luis Muriel usually lead the line with Papu Gomez or Ruslan Malinovskiy playing behind them. 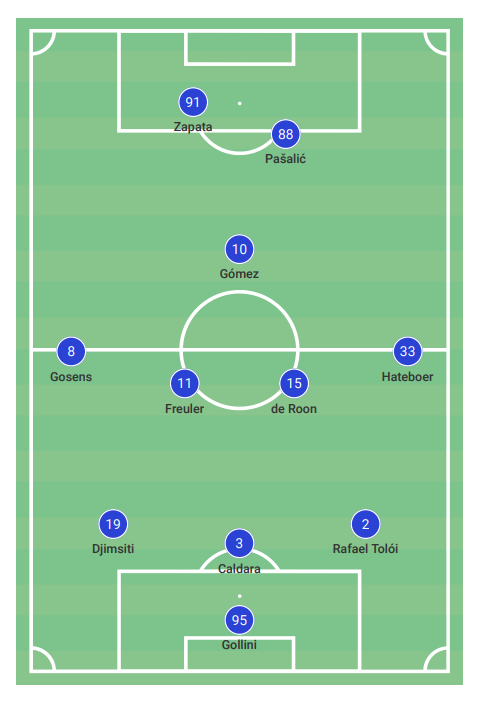 In the Gasperini system, Atalanta is a very solid defensive team that relies on high pressure and retrieving the ball as soon as possible, because Gasperini always wanted his team in attack and held the ball in the opponent’s court, therefore, he set up a tight defense system that relies mainly on high pressure from the advancing opponent’s areas.

But before that, we must get to know the defensive structure of the Atalanta team when the team is in a state of defense. When playing a 3-4-3 formation, while defending in their half they swiftly move to a 5-3-2 respectively with the wing-backs joining the back three, In this way they try to outnumber their opponents in the case of defense in their half, and work to recover the ball in the shortest time. 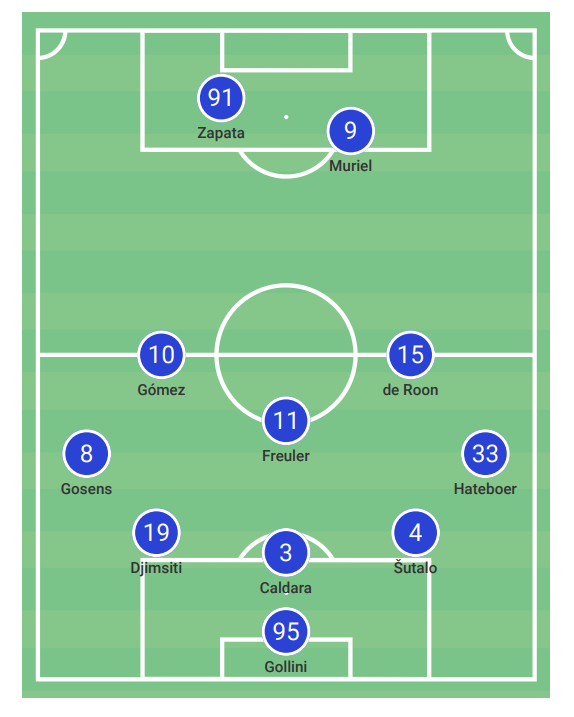 As we mentioned earlier, this tight defensive system that Gaspaini relies on when his players are in defense in their half, It is a strong system that mainly depends on the numerical increase and the convergence of the lines to each other so that Atalanta players are able to retrieve the ball in the shortest possible time and move to the attack. As we can see here, Atalanta’s players lined up in a 5-3-2 system when they were in a state of defense in their half.

Another advantage of this system is that the convergence of the lines in the 5-3-2 formation always gives the superiority to the Atalanta players in defensive duels with their opponents in their defensive third. We can clearly see this in this statistic, which indicates the large number of defensive duos that Atalanta’s players have fought in their own third. 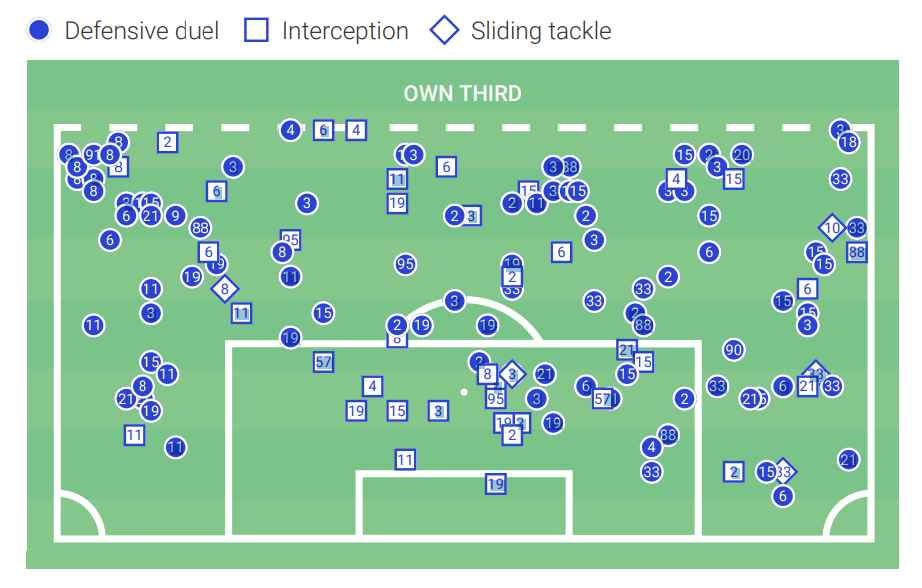 As we mentioned previously, Gasperini relies mainly on attack and to keep the ball as long as possible, so he relies heavily on advanced defense and high pressure on the opponent’s players to quickly retrieve the ball and start preparing a new attack.

The advanced defense depends on the convergence of the lines and the joining of the midfielders to press with the offensive players in order to be pressed as a one block and this helps a lot to recover the ball faster. 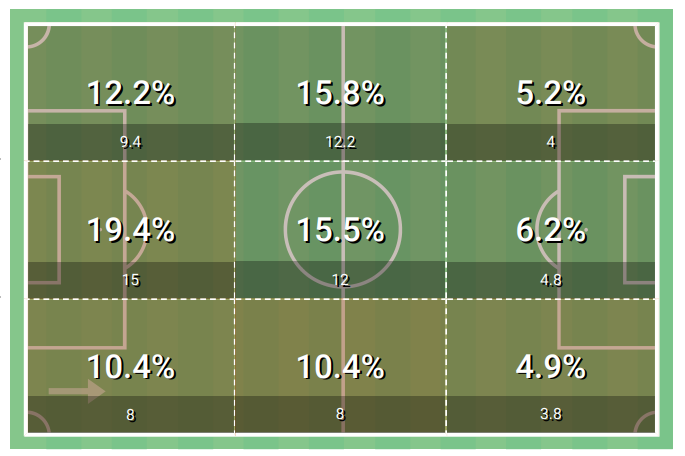 Here we can see this clearly, as when the opponent’s players had the ball in their own third, the Atalanta players created a squeeze net of three players to close the depth so that he could not pass deep into the field, and indeed he passed on the right side and the Atalanta players were able to retrieve the ball easily.

Another form of high pressure Gasperini relies on is when the ball is in possession of the opponent’s players in their half is the formation of a defensive pressure diamond in order to limit the chances of passing for the player who has the ball from the opponent and thus Atalanta players retrieve the ball quickly and keep the team in a state of constant attack.

Here we can clearly notice this as when the ball was with the opponent’s players on the right side, the Atalanta players formed a defensive pressure diamond, which reduced the chances of passing on the player with the ball, and thus Atalanta’s players were able to recover the ball.

The advantages of this attacking method are that it gives the player who has the ball more opportunities to pass, thus keeping Atalanta in the attack. Here we can see it very well when the ball was on the right side of Hans Hateboer. Remo Freuler, the midfielder, completed the offensive diamond, giving Hans hateboer another opportunity to pass away from the pressing structures and indeed the pass for the ball to Remo freuler, who passed it in depth towards Josip Iličić in Dangerous areas for the opponent’s defense. 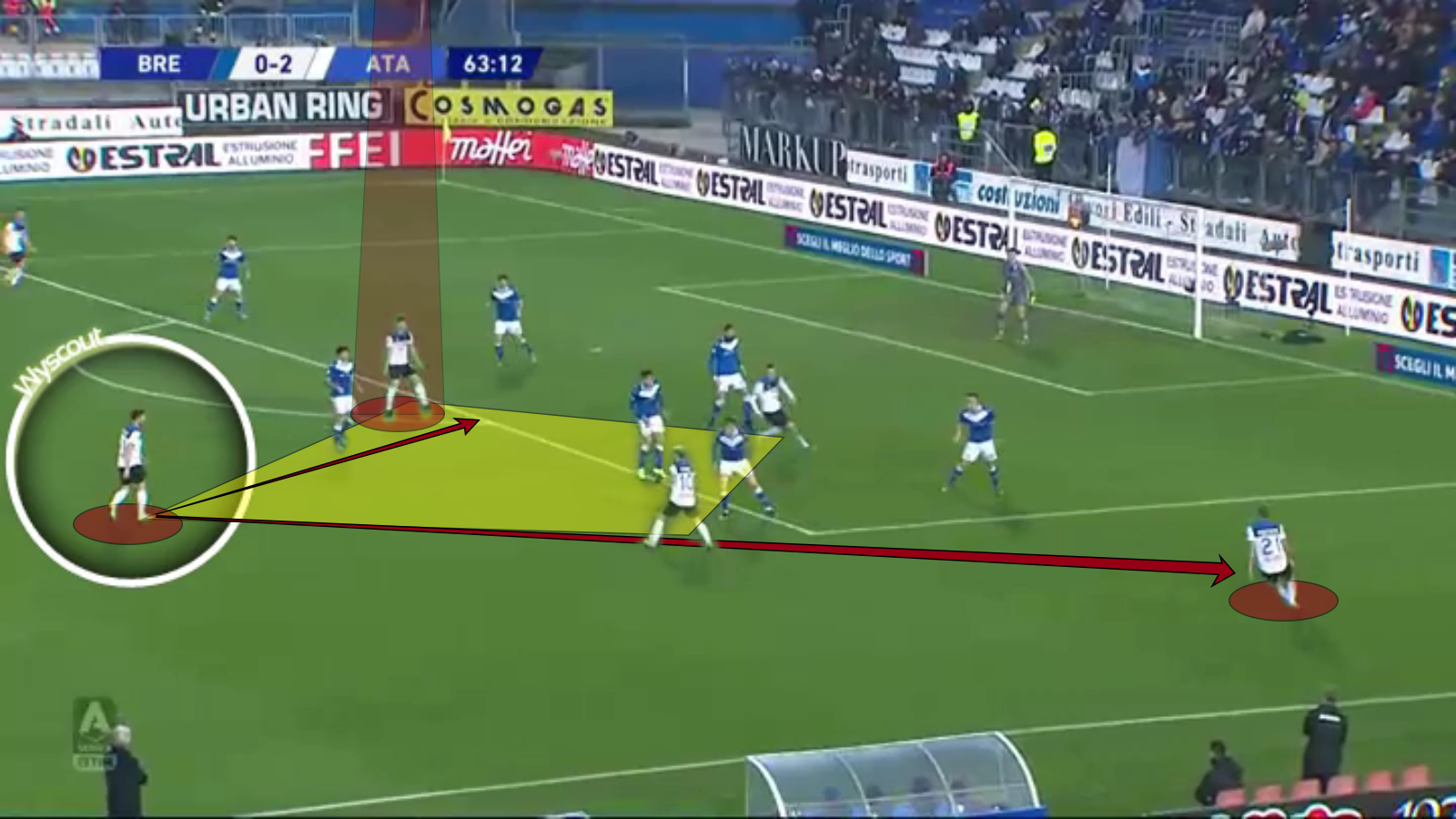 Undoubtedly, the secret of Gasperini’s success is the positional rotation of the players during the transitions; Gasperini wants the defenders and midfielders to attack and the forwards to defend. Atalanta builds from behind, advancing the ball across the wings. Through their positional exchanges, they confuse their opponents to create gaps and spaces for attack.

The strong attacking connectivity of Atalanta players depends mainly on Positional rotation. When the ball is with Atalanta players on either side, one of the midfield players overloads the ball’s location in order to give the player who has the ball a chance to play and thus keep the team in a state of permanent attack.

Here, for example, when the ball was with Gomez on the left, Remo Freuler moved to the empty area on the left side also in order to give him a chance to pass the ball and then kept Atalanta in case of attack and not loses the ball. 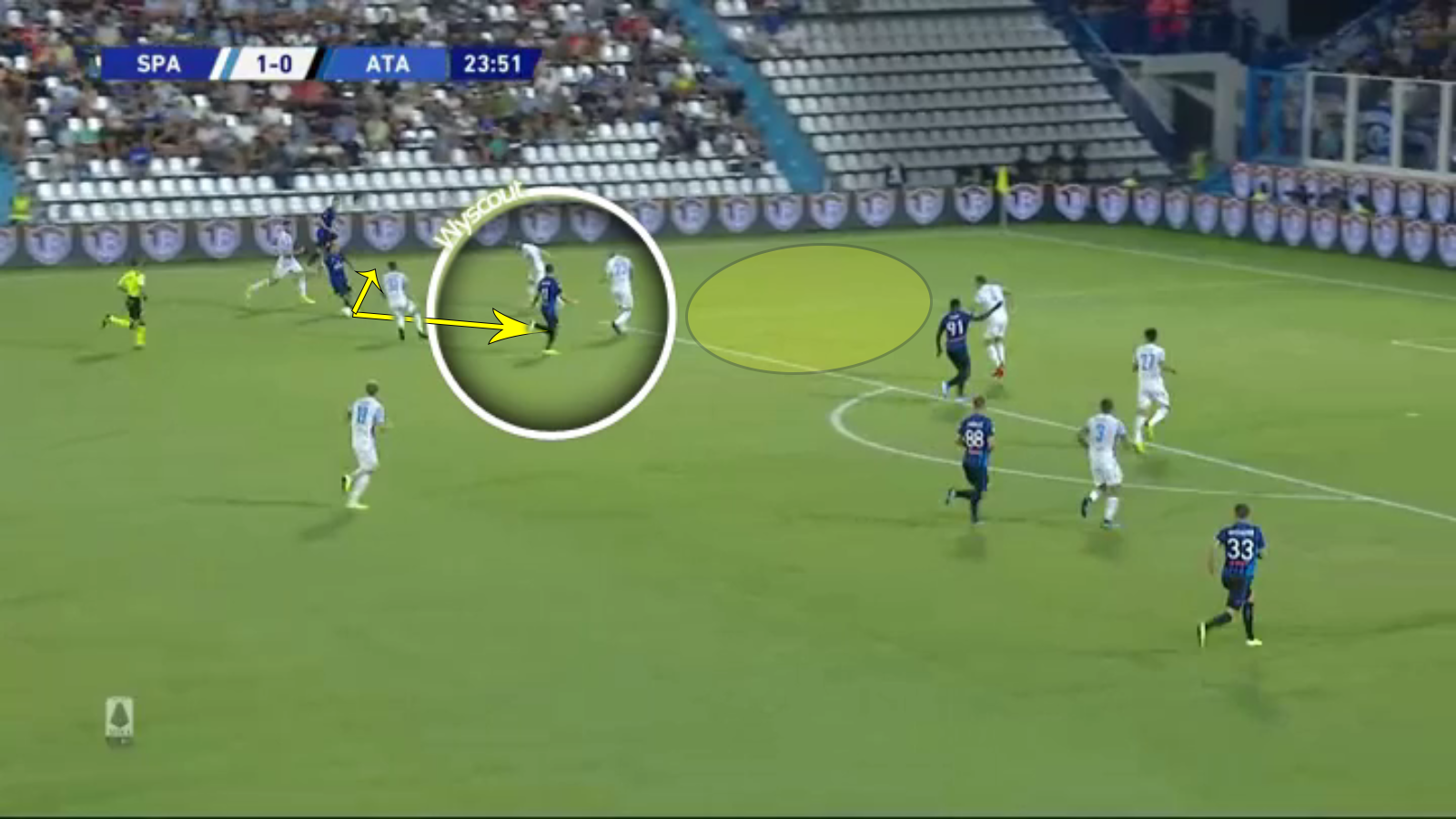 Gasperini put in place a strong system for his team at the level of defense by overloading and early pressure from advanced areas of the opponent’s court, or on the offensive level through the positional rotation system, and the whole team worked as one piece without commitment to places or without specifying the roles of the defenders or attackers, which resulted in a strong team on the defensive and offensive levels, so the aspirations and hopes of the fans of Atalanta and the greed in the competition for the title of Serie A 2020/21 soared so will Gasperini find himself in the competition for the title like last season or is he who will put himself in this field? We’ll see that throughout the season. 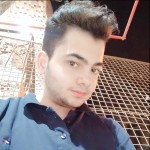 Mustapha Hassan, football Analyst, engineer and big fan for Barcelona and Zamalek, you can follow me on twitter at @mostafa_1O