Over the years the English Football League, and in particular the English Championship, has proven to be a great testing ground for young and talented players. It is not uncommon to see young players given considerable minutes at first-team level as they find their feet and work on the rough edges of their game.

In some cases, we also see the cream rise to the top and start to attract the interest of clubs at Premier League level. The latest player to have caught the eye in the Championship is the 22-year-old English forward Antoine Semenyo of Bristol City.

Semenyo is a perfect example of a young player who has benefitted from the patience of his club and, indeed, such has been his impact at first-team level this season, he was highlighted by the EFL experts on Sky Sports as part of their 21 under 21 series looking at the best young players in the English Football League. Semenyo actually spent time away from the club on loan with three separate loan spells at Bath City, Newport County and Sunderland but he failed to really catch the eye in any of those spells. Bristol City, however, trusted the process and stuck with their young forward and now they are reaping the benefits.

He is best used as a central striker although he displays the capacity and willingness to drop out into the channels or even the wide areas. He is very versatile in terms of his role as a forward player, as he can come back to receive the ball with his back to goal, while his muscular build allows him to receive under pressure, but he can also play on the shoulder of the last defender with his pace and power causing real problems for defenders should the ball be played into the space behind the defensive line.

In this scout report, we will look at the strengths of Semenyo’s game. 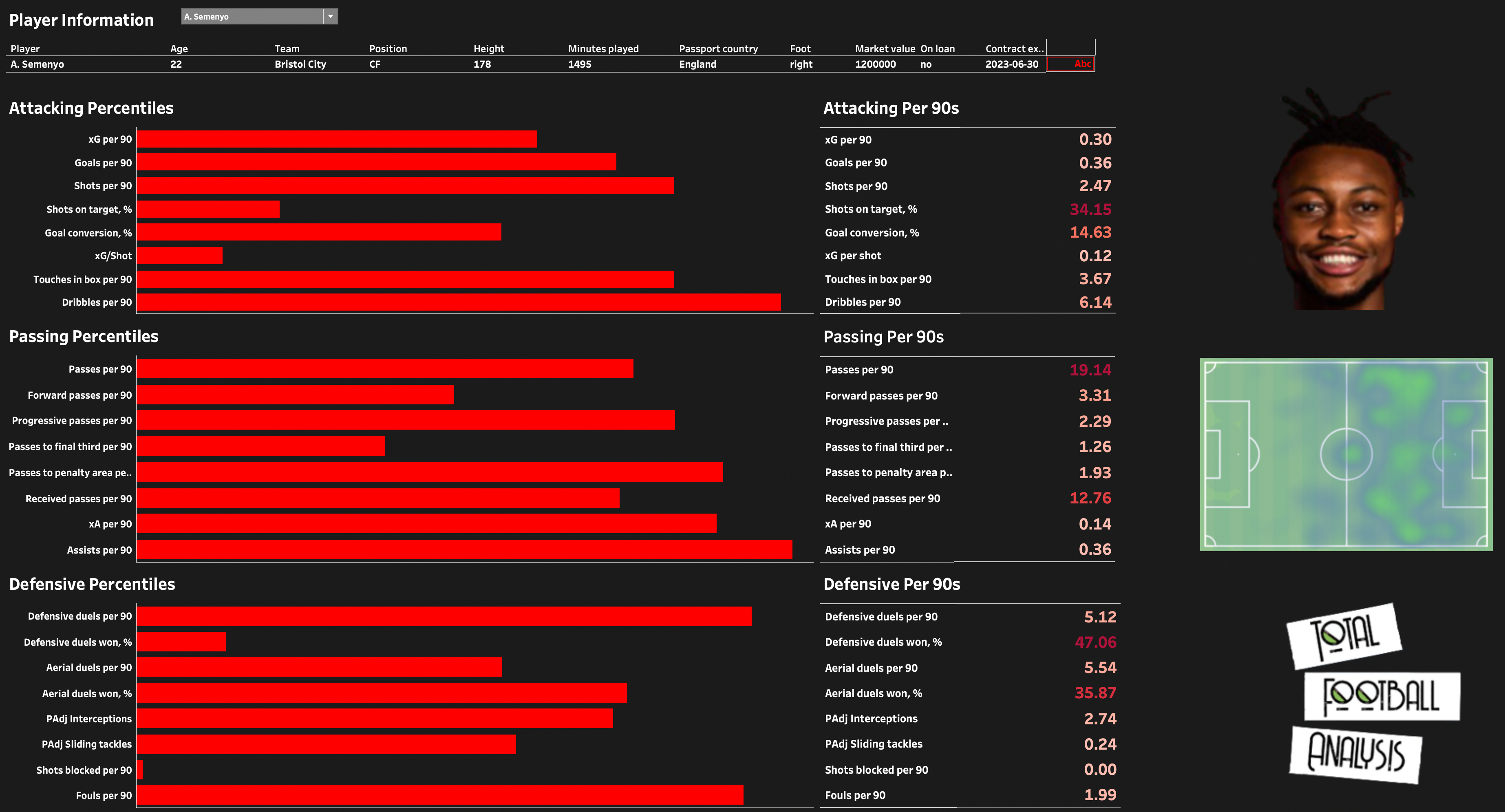 Let’s start by looking at the data profile for Semenyo. The above dashboard shows the percentile ranking for his performances against all other forwards in the Championship so far this season — the longer the bar on the bar chart, the better. As you can see, he has played 1495 minutes in the Championship at the time of writing and so far he is averaging 0.36 goals per 90 from an xG per 90 of 0.3. He is taking 2.47 shots per 90 and attempting 6.14 dribbles per 90 as his attacking abilities are shown clearly in the data. As you can clearly see, however, Semenyo is not purely a goalscorer in the final third. He is also a creator with an average of 0.36 assists per 90.

When combining his goals and assists this season so far we see a player with a goal contribution per 90 of 0.72.

While Antoine Semenyo is not the tallest of strikers, (he is listed at 178cm | 5’10”) he does have a stocky and muscular build which, along with his pace, makes him exceptionally difficult to contain on his day.

He is capable of leading the line and occupying and pinning opposition defenders to areas of the pitch in which they aren’t the most comfortable. When engaging in duels for loose balls his power and core strength mean that he can compete and indeed come out on top against defenders. This allows his team to play quickly to the highest line as they are confident that he can move dynamically and get on the ball in dangerous spaces. When in possession in these areas, Semenyo is a threat to drive beyond the defence but he can also form an effective attacking platform when holding the ball up and waiting for attacking players to join him. 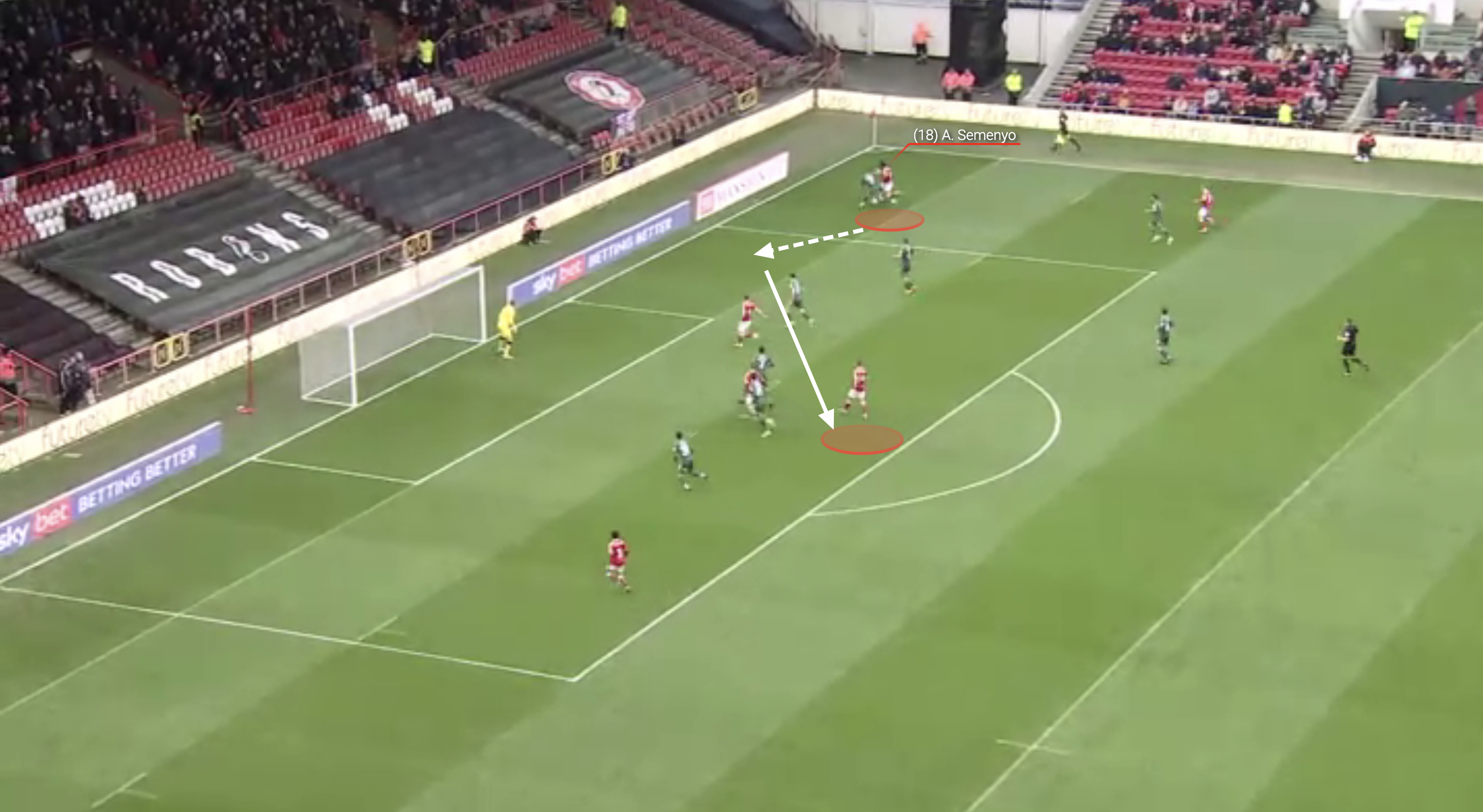 We see an example here of how dangerous and dynamic Semenyo can be in the attacking phase. Here, he has moved out into the wide spaces and engaged in a duel with an opposition player. While he has the skill and ability to turn and move in tight spaces he actually uses raw strength in the first instance when pushing off of the defender and creating space. He is then aggressive and decisive at driving inside and finding an angle for a cut back into the edge of the area for a teammate to get a shot on goal. 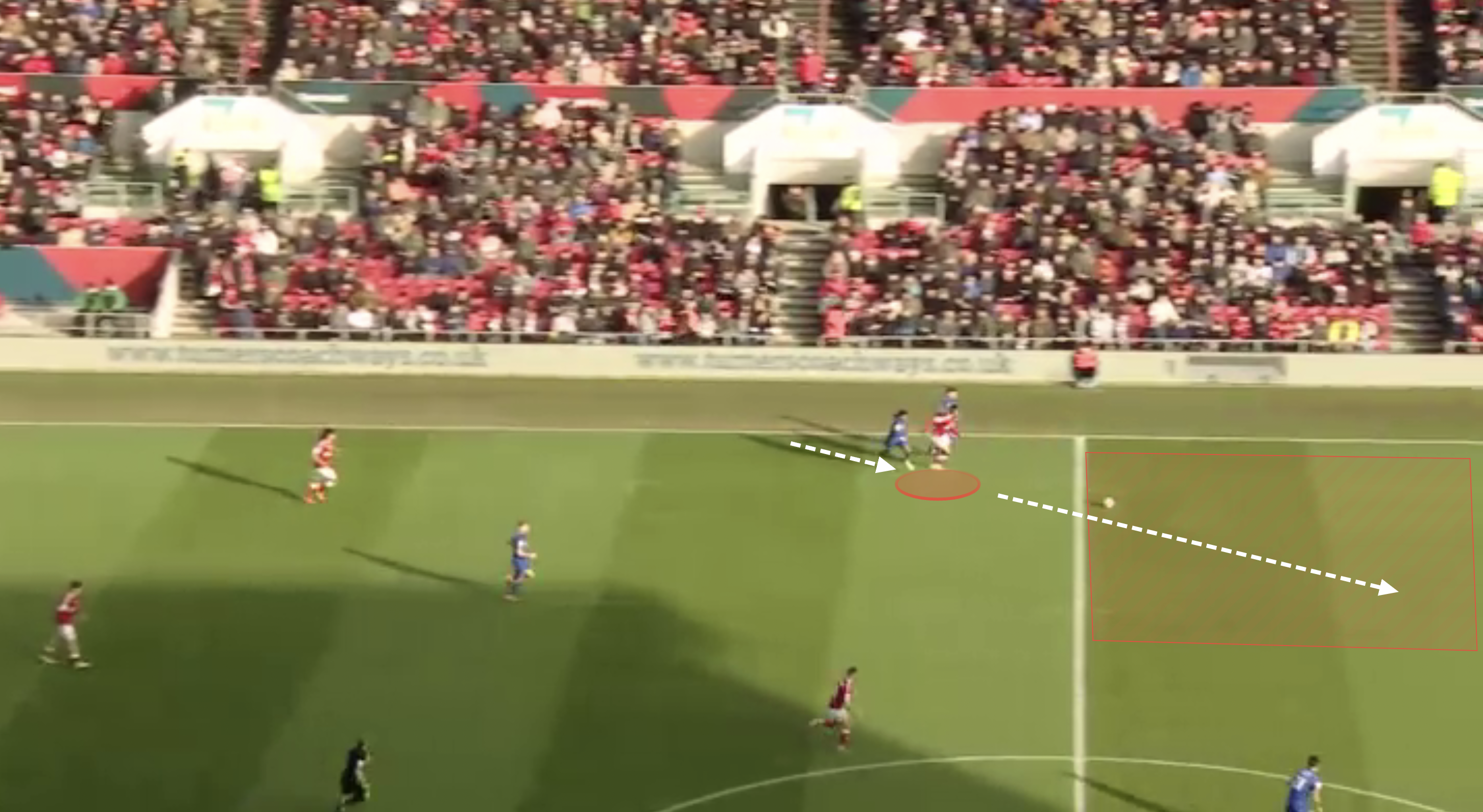 Here, we again see how dynamic Semenyo is in the attacking phase. He actually regains possession in the wide area through a defensive duel and his first thought is to turn and be aggressive in attacking the space. He trusts his ability and athleticism and beats the first player before playing a strong touch into space and moving aggressively to attack the final third and carry his ball forward.

Explosive in front of goal

While there is no doubt that Semenyo is a creative player both in terms of being able to beat defenders and attack space, as well as in terms of his ability to pick a pass and break a line, he is also an explosive and capable finisher. 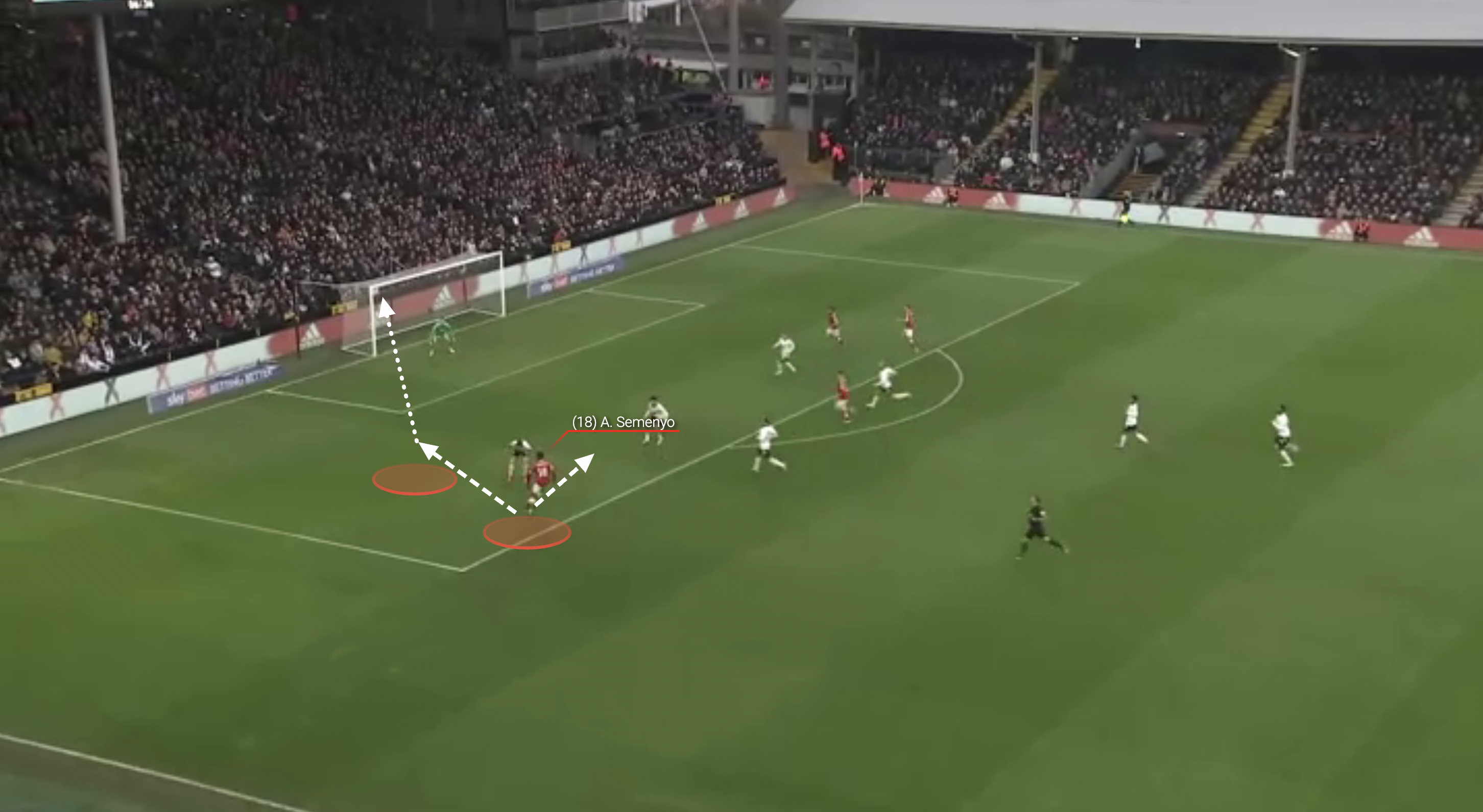 This example is taken from the match between Bristol City and Fulham, with Semenyo in possession on the corner of the penalty area. He has the ability to go inside or outside in these situations but here, he drives outside and overpowers the defender. However, with the angle tightening, you would possibly expect a cross from that area. Instead, Semenyo strikes with power and accuracy at the near post and beats the goalkeeper. 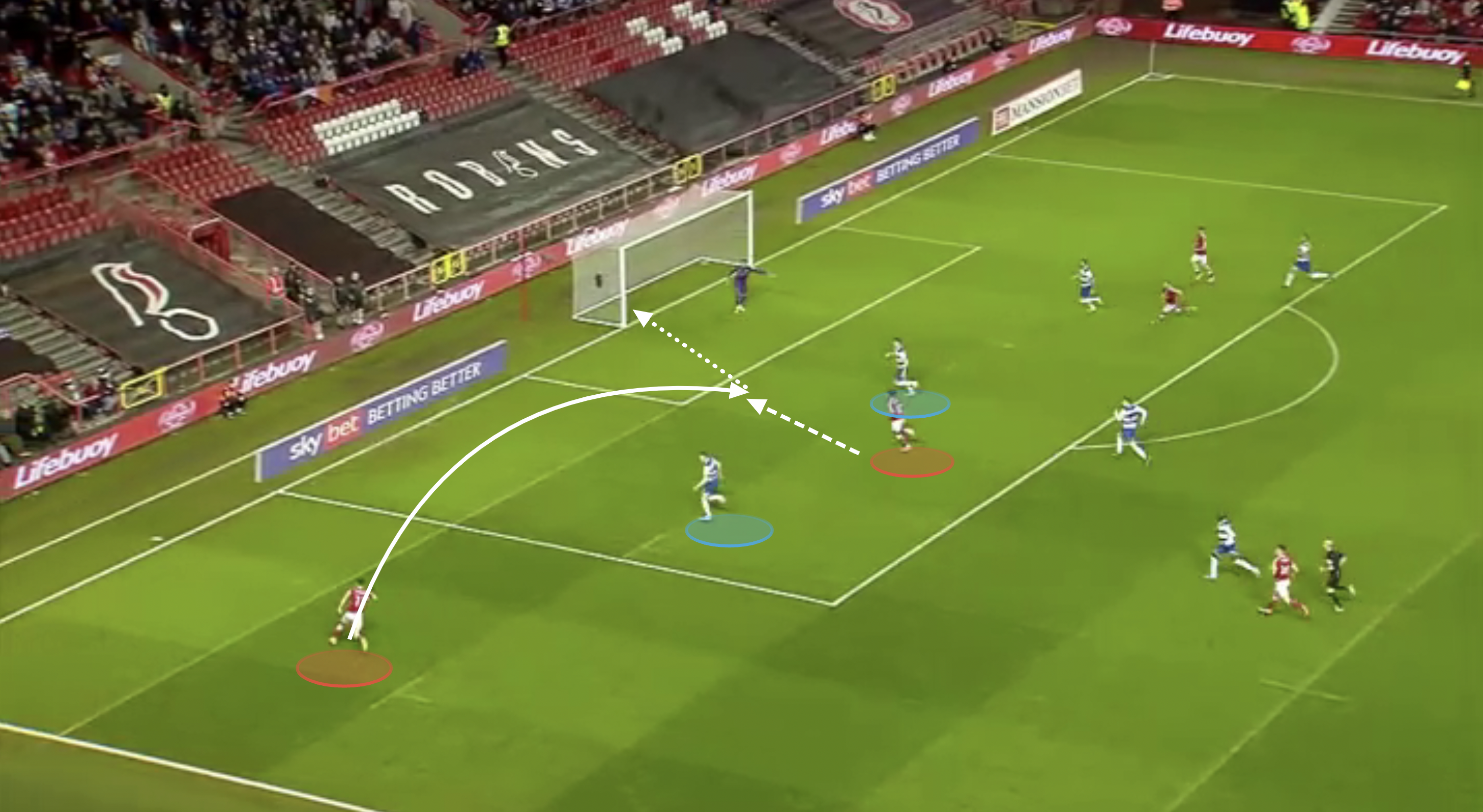 This time, I have highlighted an exceptionally creative finish from Semenyo that displays his composure and creativity in the area. With Bristol City attacking in the wide area, we see Semenyo making an aggressive movement towards the near post. As the ball is crossed low into the area, Semenyo adjusts his feet quickly to flick the ball with his heel past the goalkeeper at the near post.

Eye for a pass

While we know that Semenyo can beat a player on the dribble and carries a goal threat, we also have to acknowledge that he is creative and unselfish with his ability to create chances for others.

When playing in deeper spaces he has the ability to find passing lanes and angles to break lines for teammates to run on to. His ability to create havoc in the final third also creates space and opportunities for teammates. 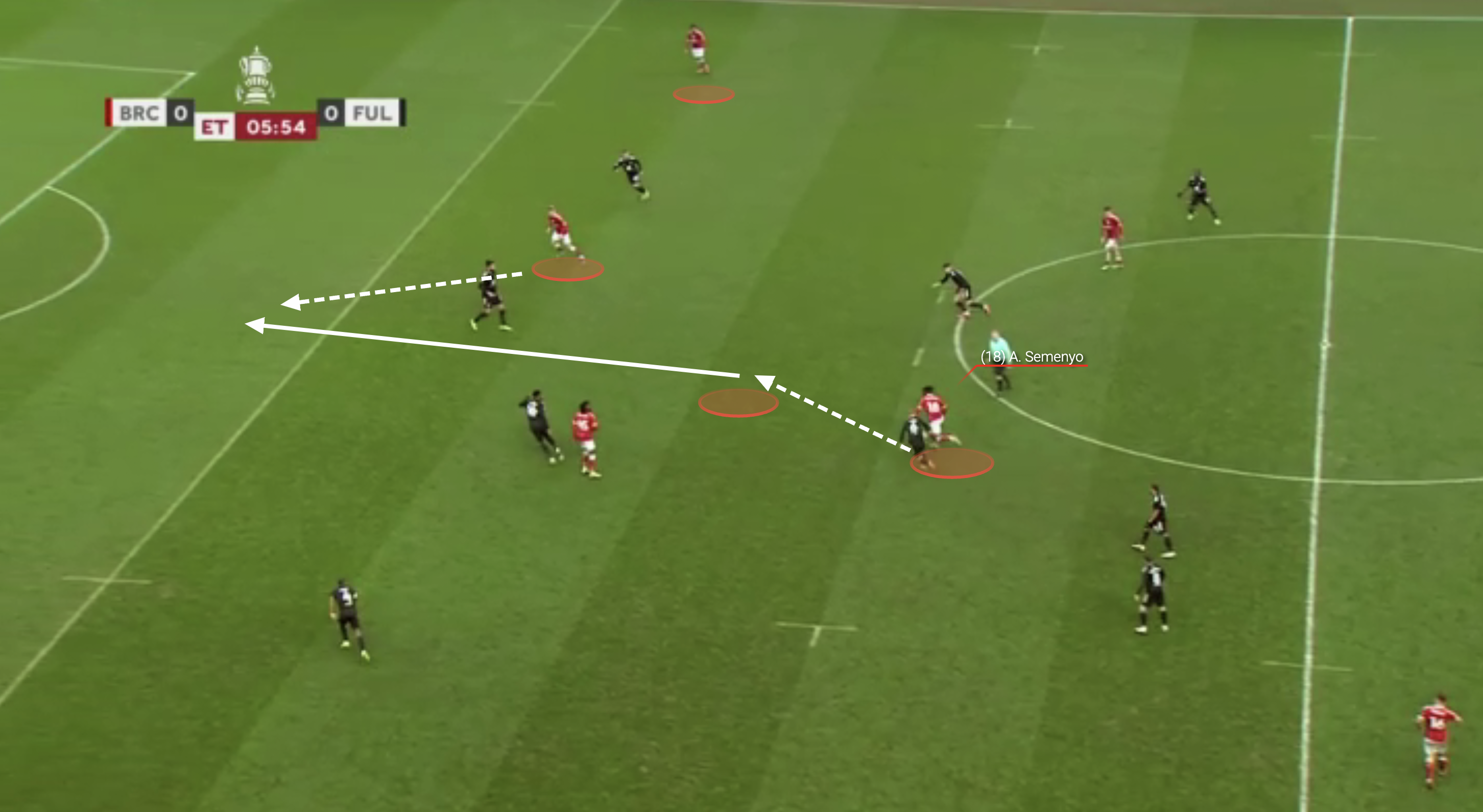 This time, we see Semenyo battling for the ball on the highest line as he uses his strength to unbalance the defender and come out of the duel in possession of the ball. He then has the opportunity to drive to the right and attack the space in an attempt to break into the penalty area; we see that Semenyo is an unselfish forward player. 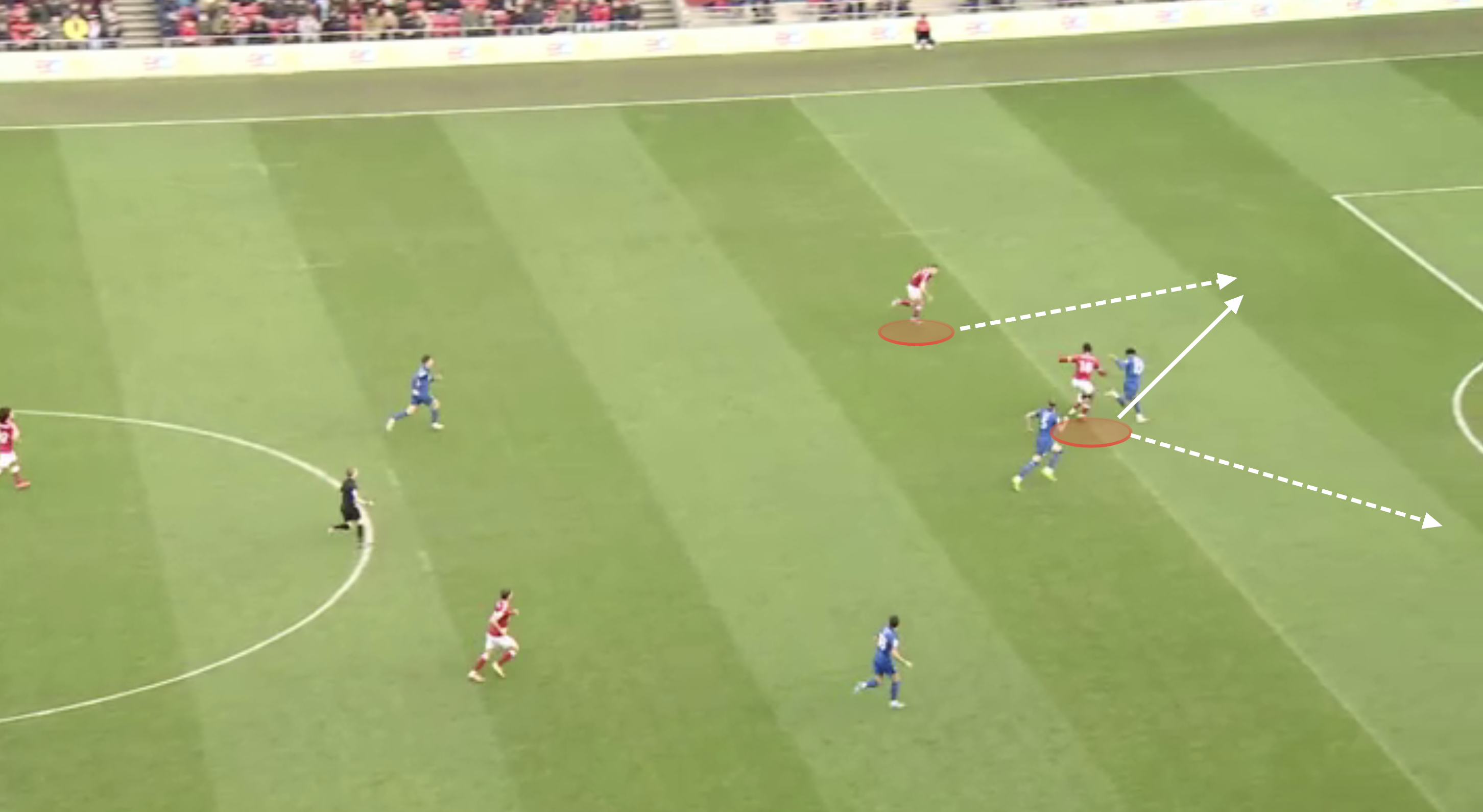 Antoine Semenyo is at the stage now where he is really coming into his own as a forward player. He has all of the tools that you need to succeed as a striker in the modern game with the ability to fill different roles within the attacking third where needed. His profile should see him get an opportunity to play at a higher level than the English Championship sooner rather than later.

He has already been attracting interest from clubs, including Celtic, but I would expect that to continue to develop, especially as Semenyo will be out of contract at the end of the 2022/23 season. If Bristol City want to retain any value in the player, they will likely have to sell this summer. 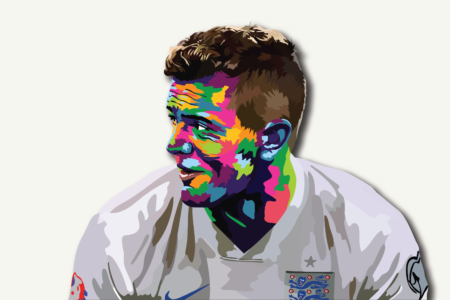 Jack Wilshere: Why he still has more to offer

Jack Wilshere had been without a club since the end of last season, where he spent the second period of […] 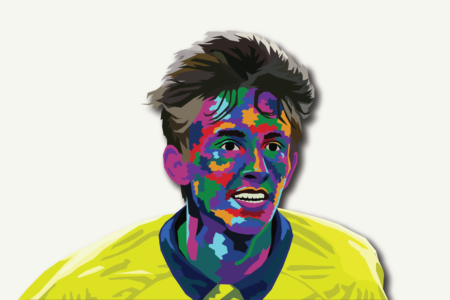 Jesper Lindstrom: How has he performed at Eintracht Frankfurt?

Eintracht Frankfurt have had a mixed season thus far. They had a rocky start to the season, with just six […] 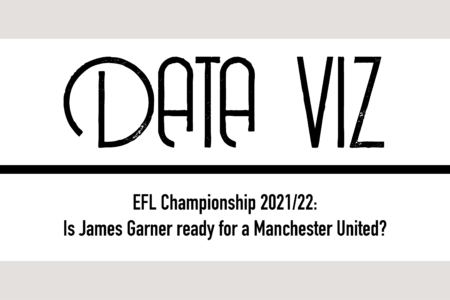 EFL Championship 2021/22: Is James Garner ready for a Manchester United?

Manchester United’s James Garner has been a hot topic over the last few weeks for his performances in central midfield. […] 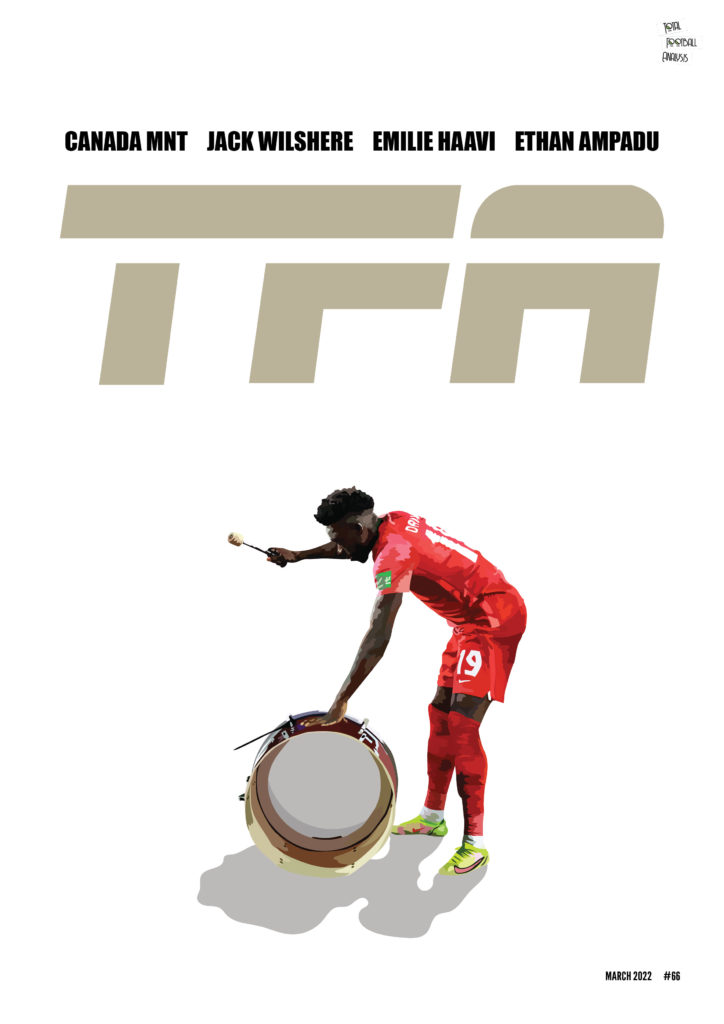