Raheem Sterling is one of the best wingers on the planet, playing for a dominant team that creates a lot of chances. Throughout the last couple of years with Manchester City, he established himself as one of the most prolific scorers in the Premier League and Champions League, netting at least 20 goals in the last three seasons in those two competitions alone.

However, it wasn’t always the case. During his tenure with Liverpool, and the first years after moving over to Etihad, Sterling wasn’t even close to being somewhat of a clinical finisher. So, it’s interesting to see how the Englishman transformed his finishing ability over the years and in this data analysis we will be using shot maps as a way to identify his progress. 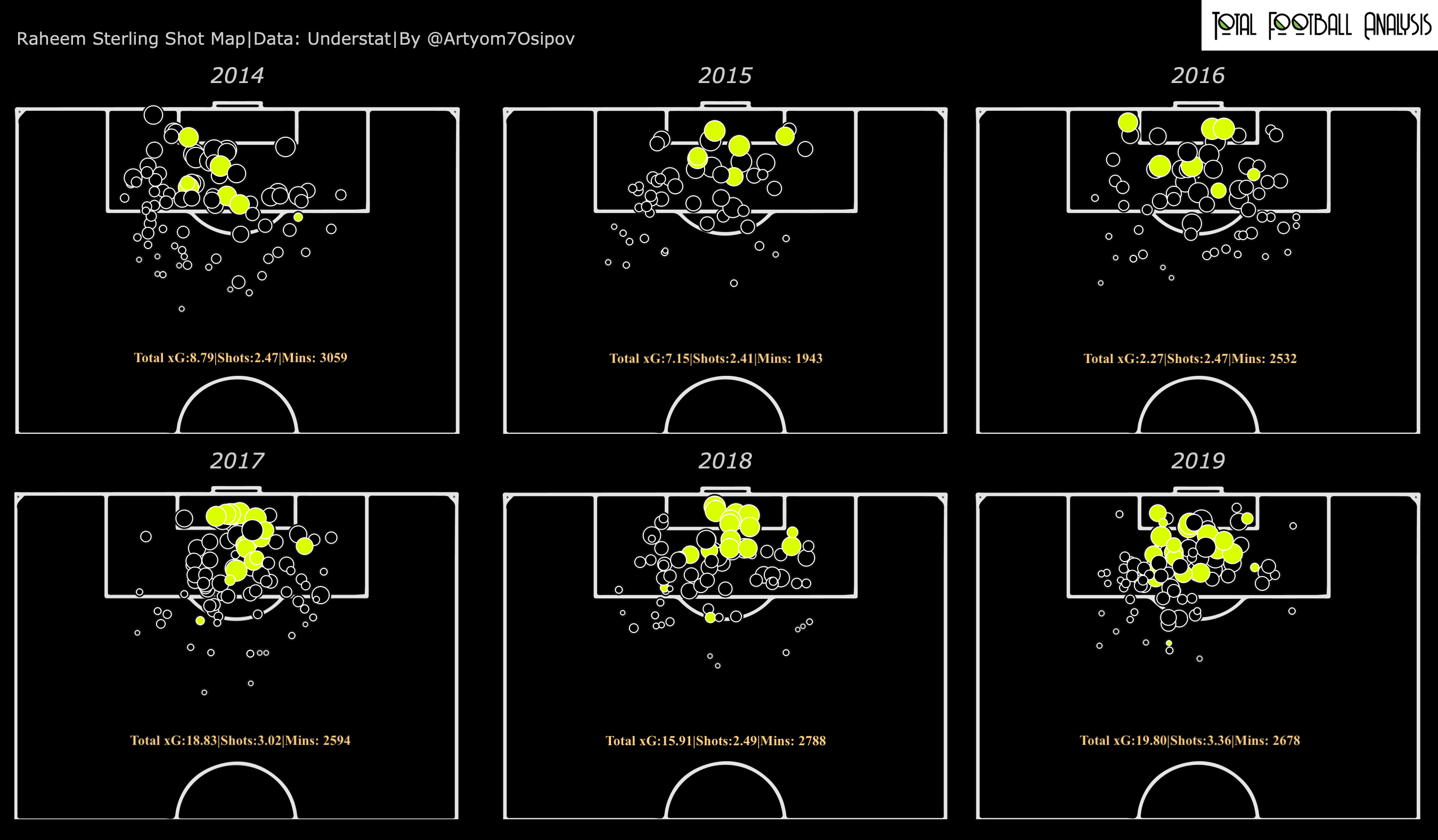 The first takeaway from this data visualisation is that Sterling wasn’t an efficient shooter in Liverpool by any means. In 2014, there are a lot of outside shots, and the biggest portion of shots is spread out right across the brink of a penalty area. Moreover, very few shots near the six-yard box were used. In the next few years, 2015 and 2016, the winger becomes more focused on shooting inside the penalty area.

Working under Pep Guardiola and the individual coaching sessions with Mikel Arteta made its impact, and there is a spike in shooting volume and, as a result, in individual statistics, after 2016. What’s more important is the increased number of goals from more dangerous positions, and you can see that in 2017 and 2018, there are a lot of goals in the six-yard box – simple tap-ins. His movement and finishing improved, and with that, the quality of his chances improved too.

After these super-successful seasons, opponents started adjusting their defensive strategy more and more, making it tough for City’s attackers to play in their usual manner and forcing some tweaks. So, there are fewer tap-in finishes for Sterling in the 2019/20 season, however, it did not have a decisive effect on his numbers. On the contrary, he broke his goalscoring record for the Premier League campaign, scoring 20 goals in the competition.

Raheem Sterling is still only 25, and he’s managed to keep his scoring records on the highest level over the years. He was on a goalless streak at the beginning of this calendar year, and he talked about changing his mentality when it comes to scoring in the interviews. This player is ready to change in order to succeed, so there is no sign that he won’t keep delivering results in the future.