Bryan Mbeumo scout report: Why the French forward is a vital cog in Brentford’s attack

Newly-promoted Brentford have got off to a strong start in the Premier League, taking eight points from their first five games. Whilst Ivan Toney, Rico Henry, Pontus Jansson and new signing from Celtic, Kristoffer Ajer, have rightly been receiving praise for their performances in England’s top division so far, Bryan Mbeumo is perhaps a name that has flown under the radar thus far.

Mbeumo, who only turned 22 last month, has been a permanent source of energy and flair in the Bees’ front line. He has been with Brentford since the beginning of the 2019/20 season, signing for £5.8 million from French side Troyes. His impact was instant, notching 16 goals and making seven assists in his debut Championship season, whilst last season he scored eight and had 10 assists in the league too. Whilst he is yet to grab an assist this season, he has started the campaign on good form, with one Premier League goal, and one in the EFL Cup too.

Given his fine performances over the past two seasons, there will be plenty of sides around Europe closely monitoring how he adapts to life in the Premier League this season, and with good reason too.

This tactical analysis and scout report will provide an analysis on Mbeumo’s key attributes as a player, whilst providing information on how he fits into Brentford’s tactics.

Mbeumo may line up as part of a front two, but that position is too restrictive for where he actually influences play. Mbeumo enjoys having the freedom to move away from the front line. His heat map from last season shows his range of positioning over the course of a game.

We can see an example of this in the image below from the Wolves game, where Mbeumo moves from a starting position in the front line of Brentford’s attack, to present an option for the defence looking to play out. As he receives, there are only three Brentford players clearly deeper than him on the pitch. Moving so deep from a high starting position, Mbeumo is able to evade tight marking and he plays immediately to the wing off a one-touch pass. 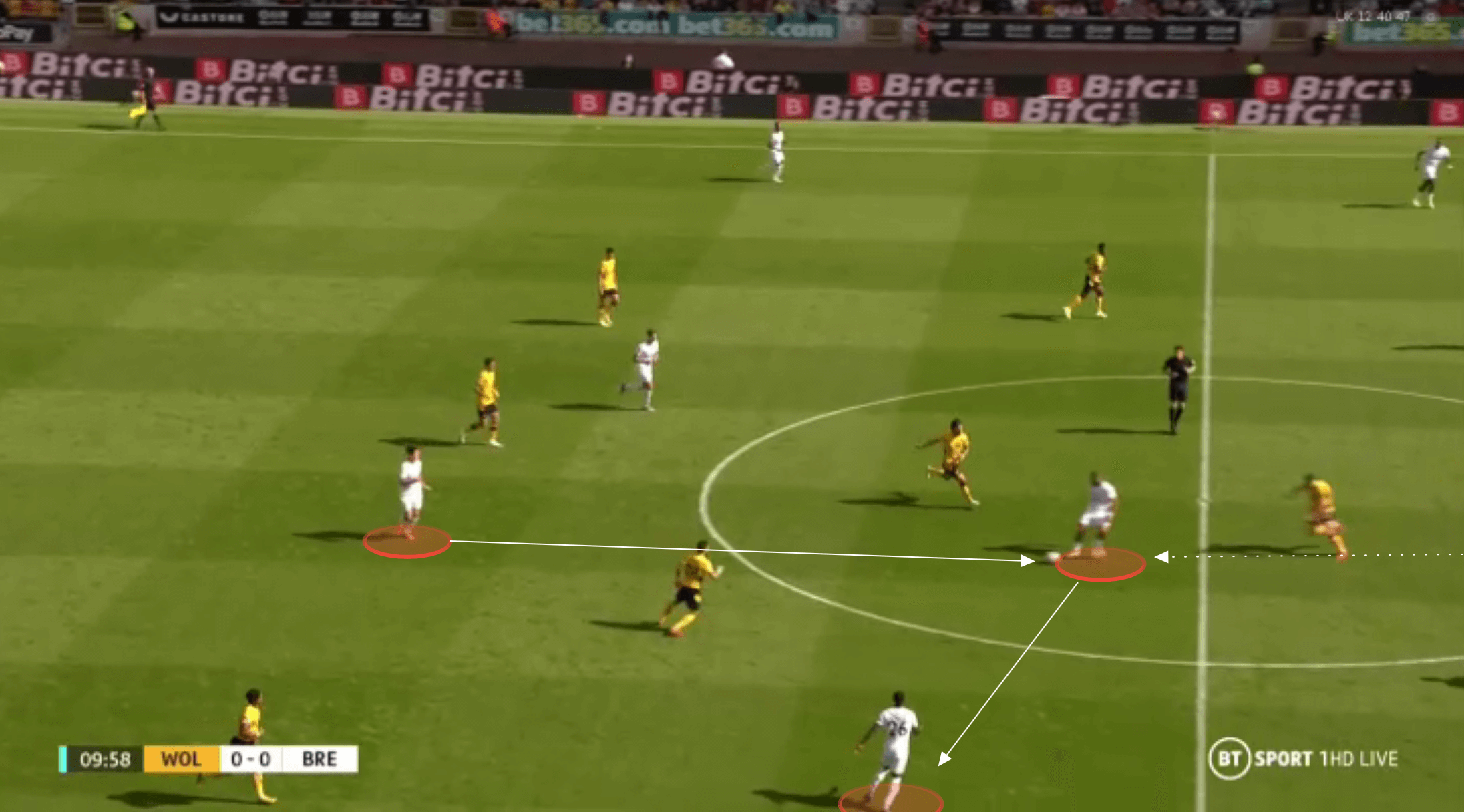 The space left open in Brentford’s midfield allows him to not only drop into this space, but it provides plenty of options for him as to where he may choose to drop into.

He doesn’t shirk his responsibilities further up the pitch though. Moments after receiving in midfield and playing out wide, Mbeumo is already pushing forward through the central channel, looking to hit the space between the opposition centre-backs, and is arguably already an option for a through pass. 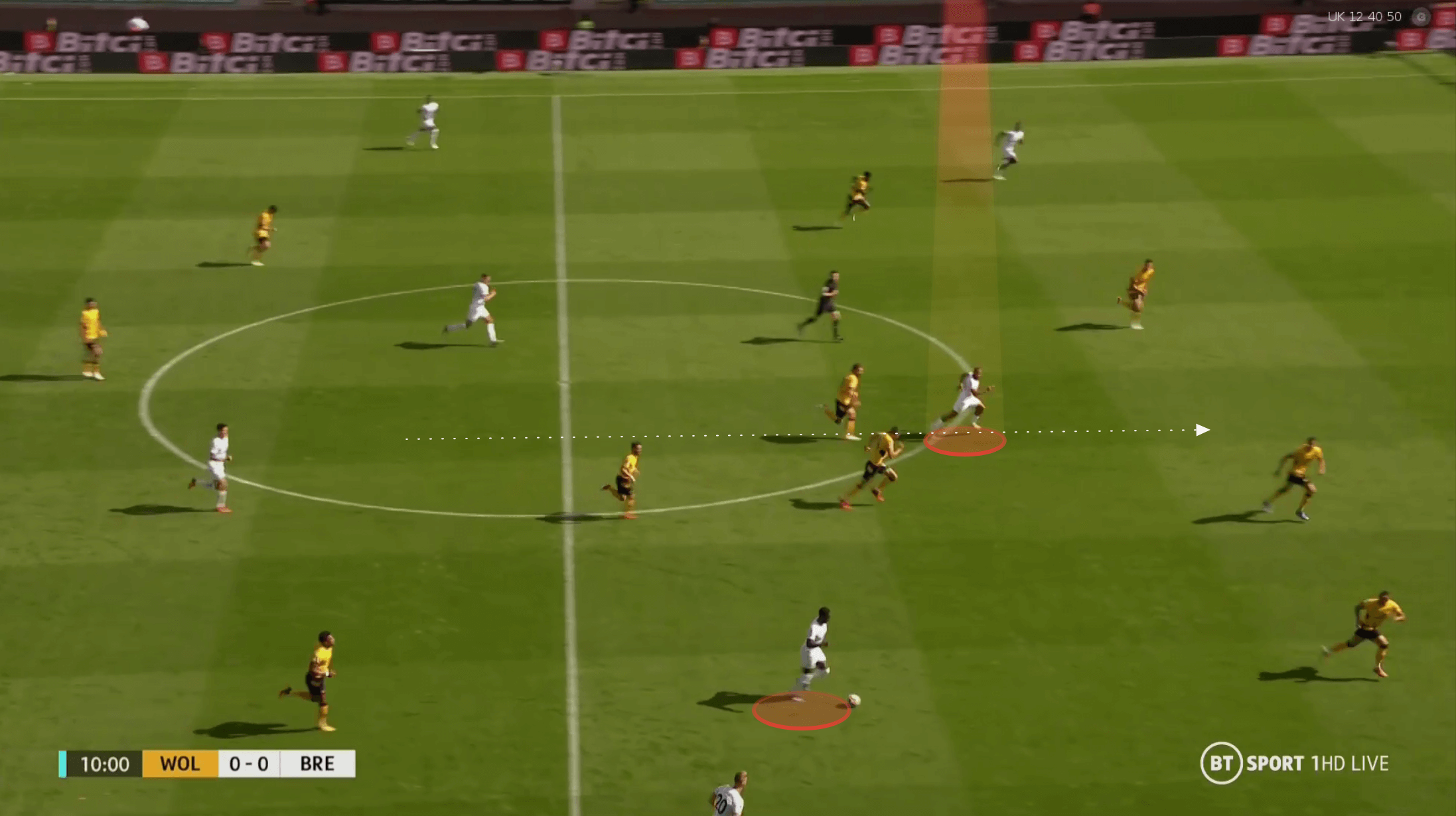 Mbeumo is an intelligent mover, and clearly understands his role within Thomas Frank’s system in possession. He is a constant option for Brentford to play to in between the lines. Mbeumo regularly positions himself in spaces where he can receive and Brentford can break lines with. His movements into these areas are well-timed though, and he doesn’t simply linger in these spaces. He starts high, even higher than Toney at times, but has an excellent turn of pace where he will burst away from his marker and into these spaces.

He will react to the positioning of the ball but also recognises triggers in Brentford’s build-up play to begin his movement. One of these is a lateral pass from one teammate to another, where the new ball-carrier is facing the opposition goal, and has possession in the same channel that Mbeumo is situated in. The French attacker will then drop into the half-space as soon as this pass is played, receiving between the lines, preferably on the half-turn. We can see this pattern occurring in the following image. 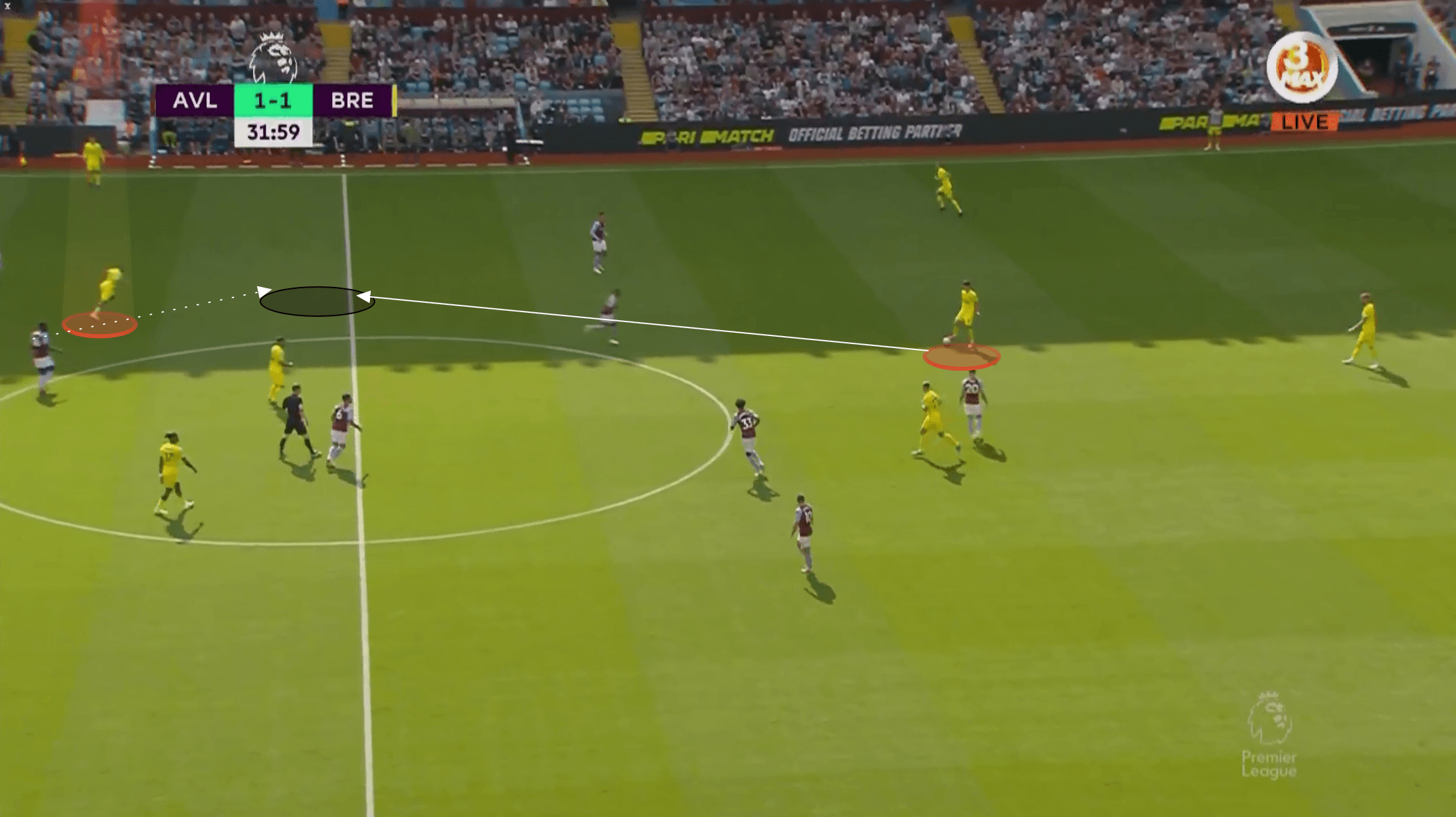 Further forward, Mbeumo engages in the kind of movement you would expect from a centre-forward playing alongside someone with Toney’s attributes.

Toney is strong, with an impressive frame, and as such provides an excellent target, alongside many other excellent attributes. Any pass into his strike partner and Mbeumo is ready to provide an option. He varies his approach, with him potentially dropping nearby where Toney can find him with a short pass away from goal, or engaging in a quick combination with one another. However, Mbeumo has good acceleration and an impressive top speed. As a result, he can also be a threat in behind. If Toney can draw a centre-back forward as he receives possession, Mbeumo is quick to recognise this and will move diagonally in behind, filling the space behind this centre-back. This can be particularly devastating if Toney can find a nearby central-midfielder who can instantly play in behind, but Toney also has the individual flair in possession to conjure a pass in behind, even from a position like the one shown below. 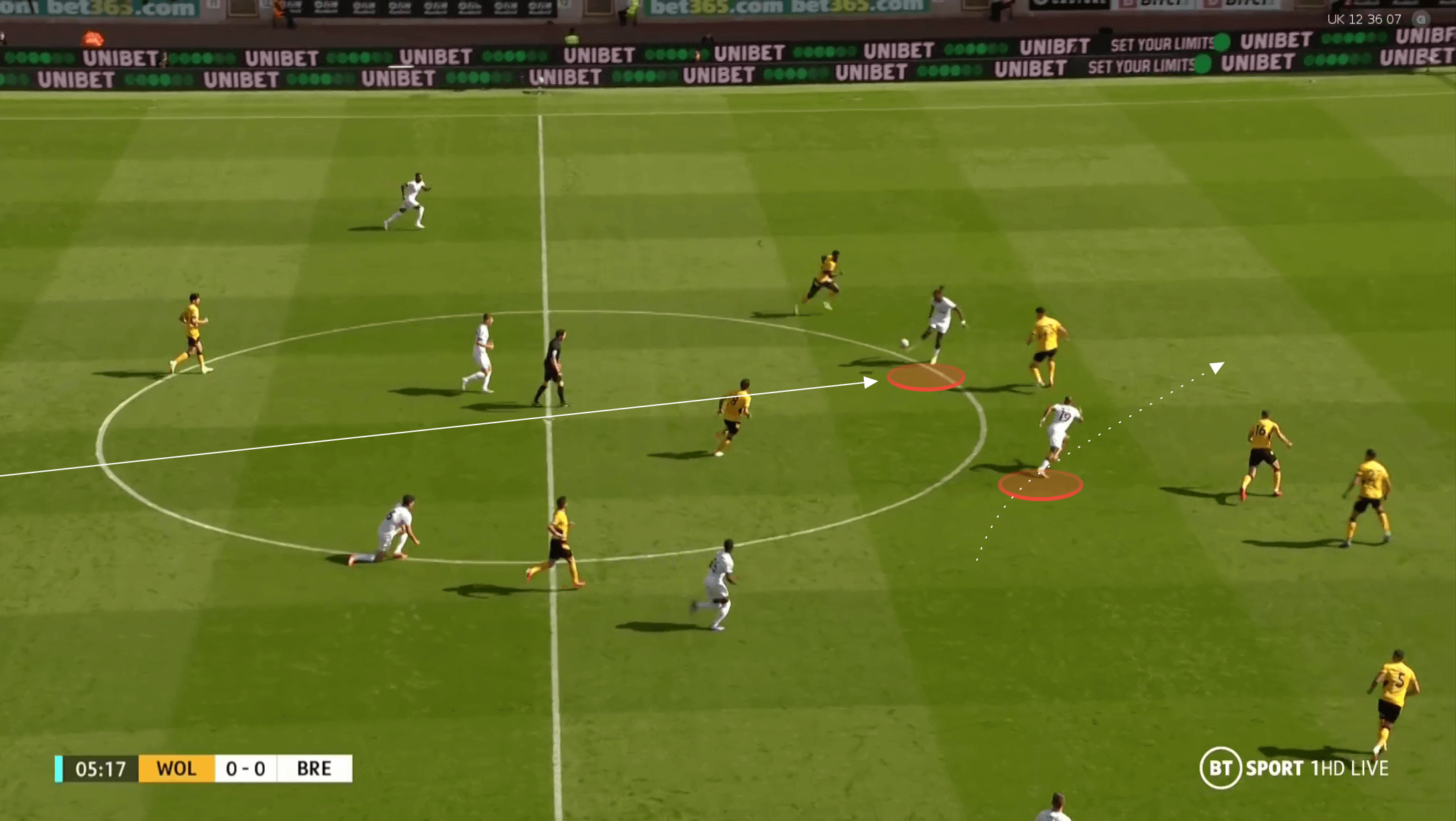 Equally, Mbeumo will explore spaces along the width of the front line. He positions himself again where he can’t be tightly marked, placing himself between two defenders. Looking at the following image, Mbeumo may start on the blindside of the far-side of the two defenders. He will then look to make a late movement between the two, looking to play off the shoulder of the near-side defender. It’s a lot of movement to make in a short space of time, but Mbeumo’s timing is very good.

This clever movement to avoid being tracked, along with his timing and pace, make Mbeumo a legitimate threat in behind if he can be found with a through pass. 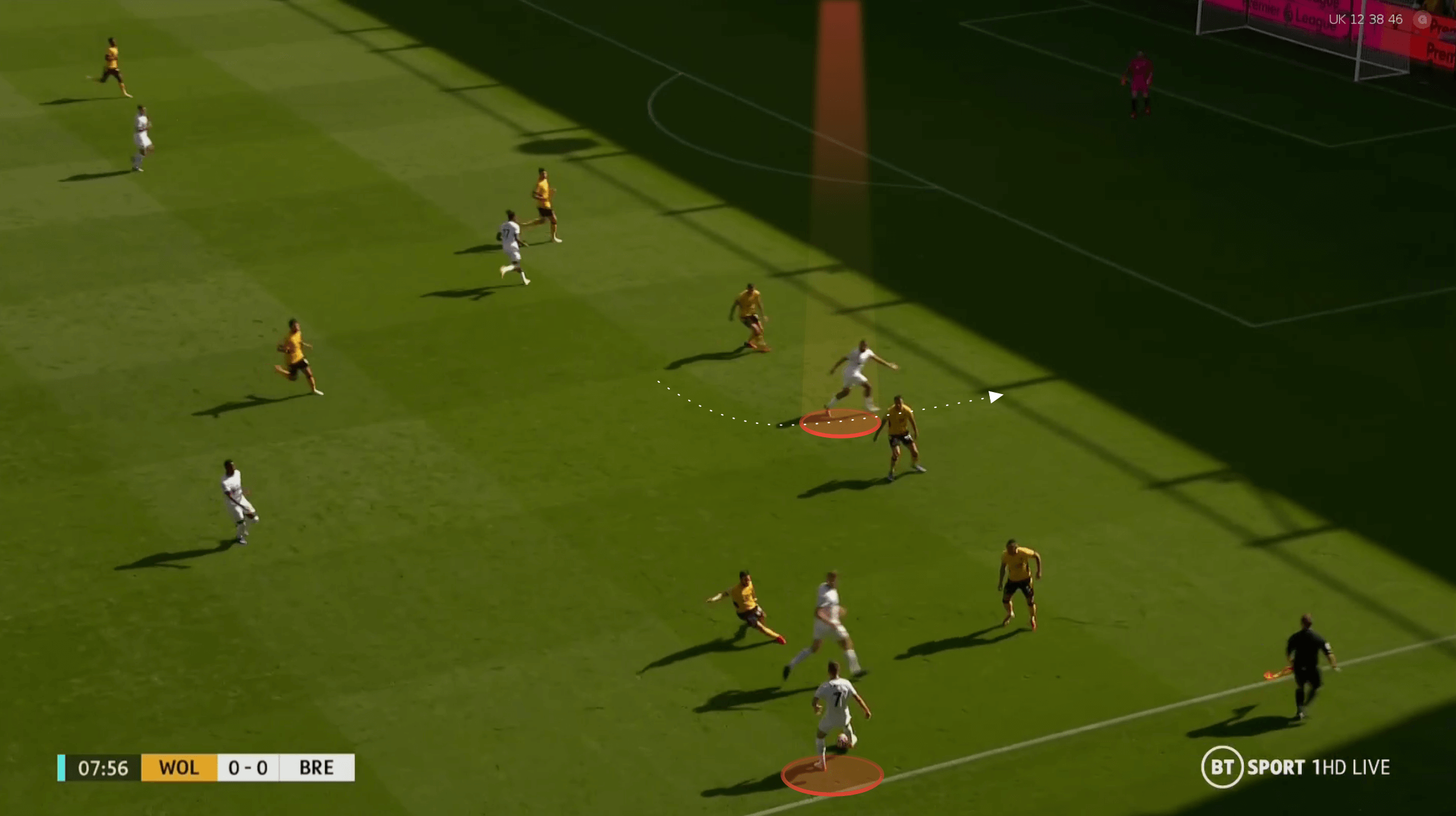 Mbeumo is a technical player who has a first touch of real quality. He can receive on either foot but greatly prefers to do his work with his favoured left foot. Mbeumo can play off of one-touch but possesses a maturity in possession that belies his age. He reads the space around him well, scanning and using his peripheral vision to assess how immediate any pressure is, whilst looking for a passing option too. He is comfortable holding the ball up but can be outmuscled, particularly if he takes a flat body position as he receives. His best work comes when using his dribbling ability to hold up play. He will take many small touches when holding the ball up, keeping an upright body position, whilst changing direction if pressured by a defender. 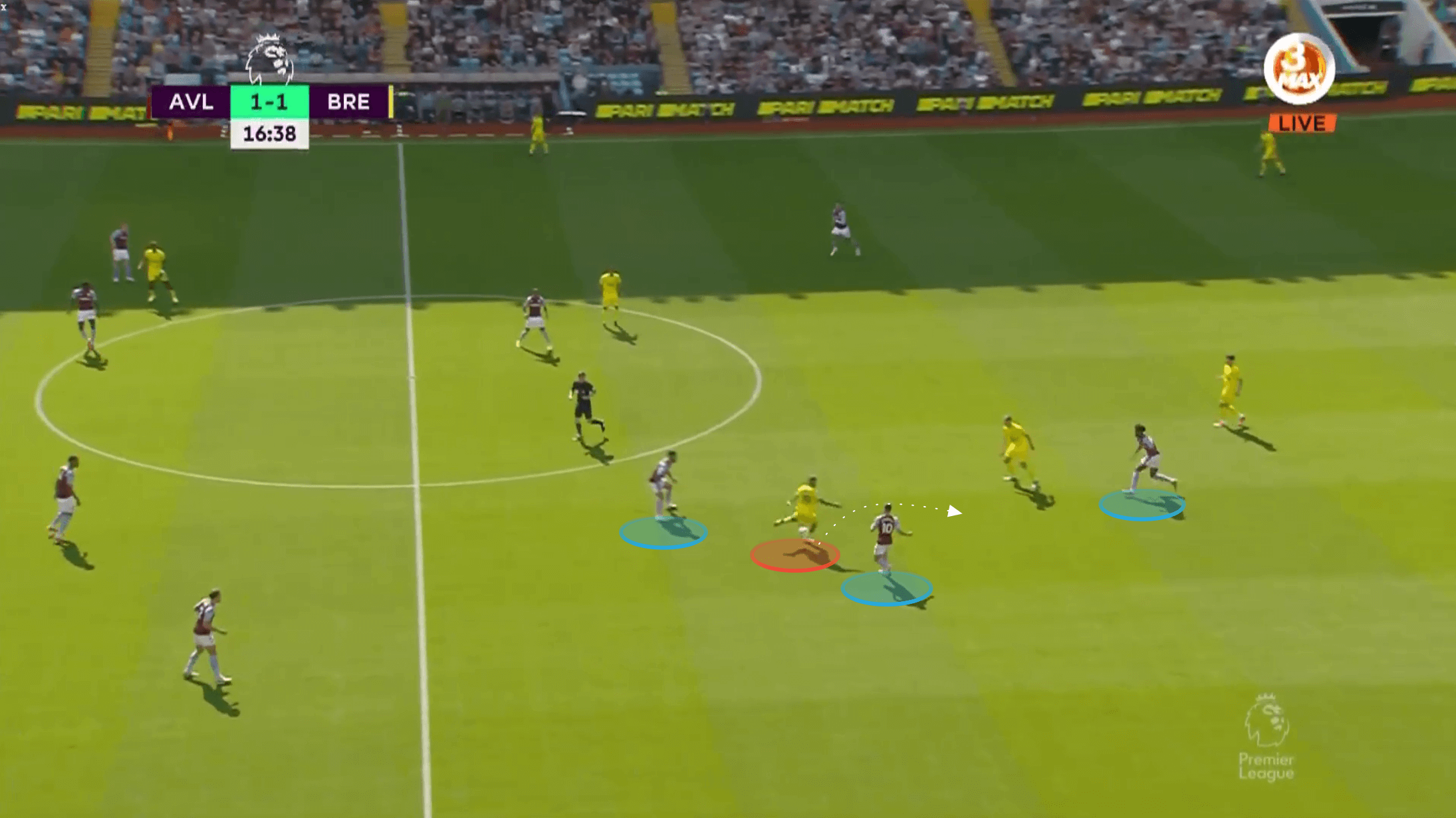 Further forward he can hold up possession too and will use his awareness to release players through tight gaps despite being in a less than advantageous position. He uses ingenuity and innovation with his passing to find teammates despite being under heavy pressure.

Such an example can be seen in the next image from Brentford’s recent fixture against Brighton. Having drawn two defenders over towards him, Mbeumo is holding up possession, albeit in a poor position, facing the edge of the pitch with little room to manoeuvre. Without scanning, Mbeumo sees the run behind him of his teammate and is able to play a back-heeled pass through the gap. 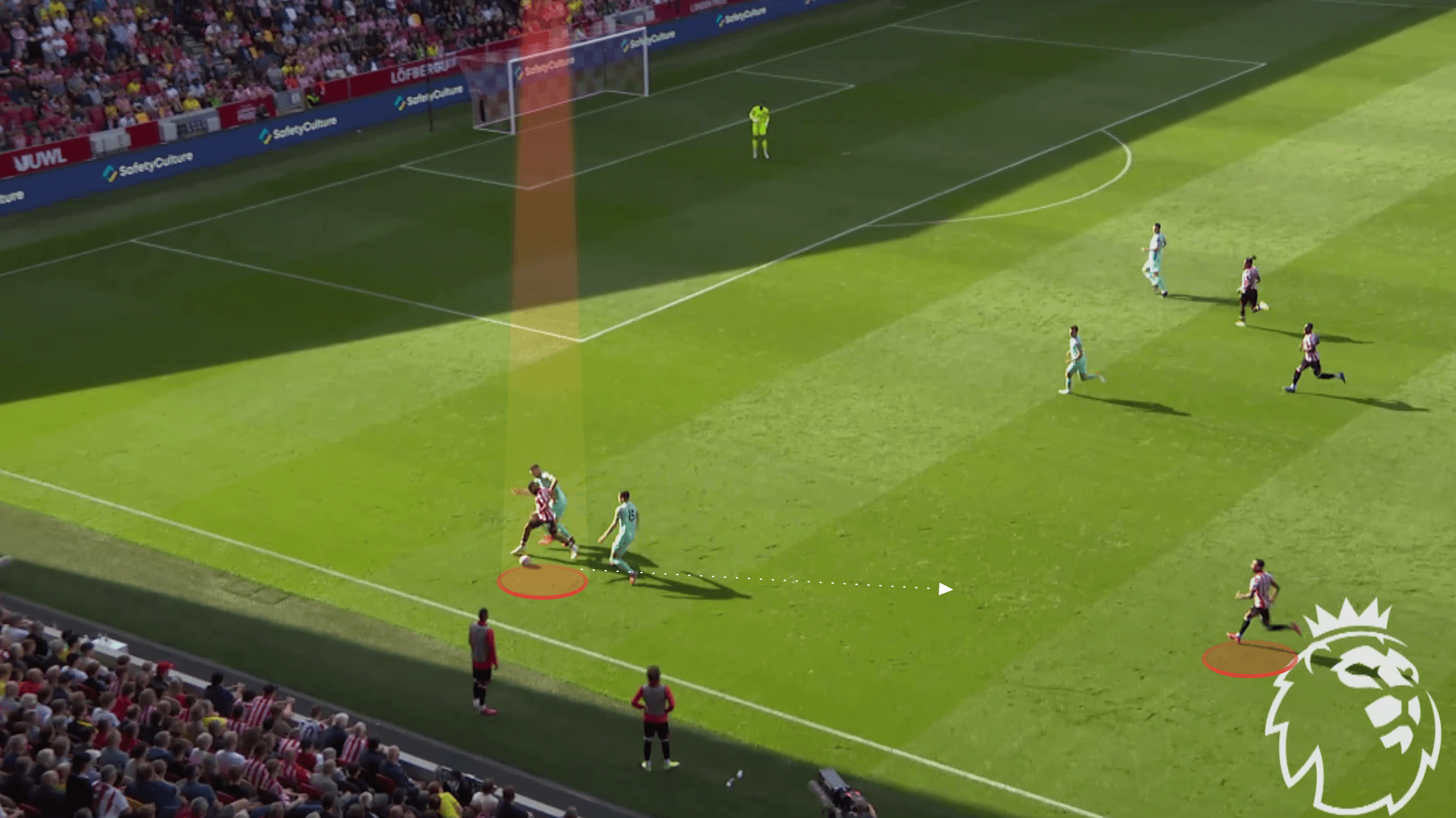 Mbeumo can be a really useful player in attacking transition. Brentford keep their attackers close to their midfield in the defensive phase. As such, Mbeumo can recover the ball himself, pinching the ball away from opposition midfielders in front of him, making a late, well-timed move to dispossess them from the blindside. Upon regaining the ball Mbeumo is direct and fast. He can quickly progress the ball and begin a counter-attack. He is confident driving forward on the ball and is a competent ball-carrier, but can show quality with his forward passing on quick breaks too. Even if he doesn’t recover the ball himself he is immediately a passing option on attacking transition, such is his proximity to the loss of the ball, and his ability to receive under pressure. 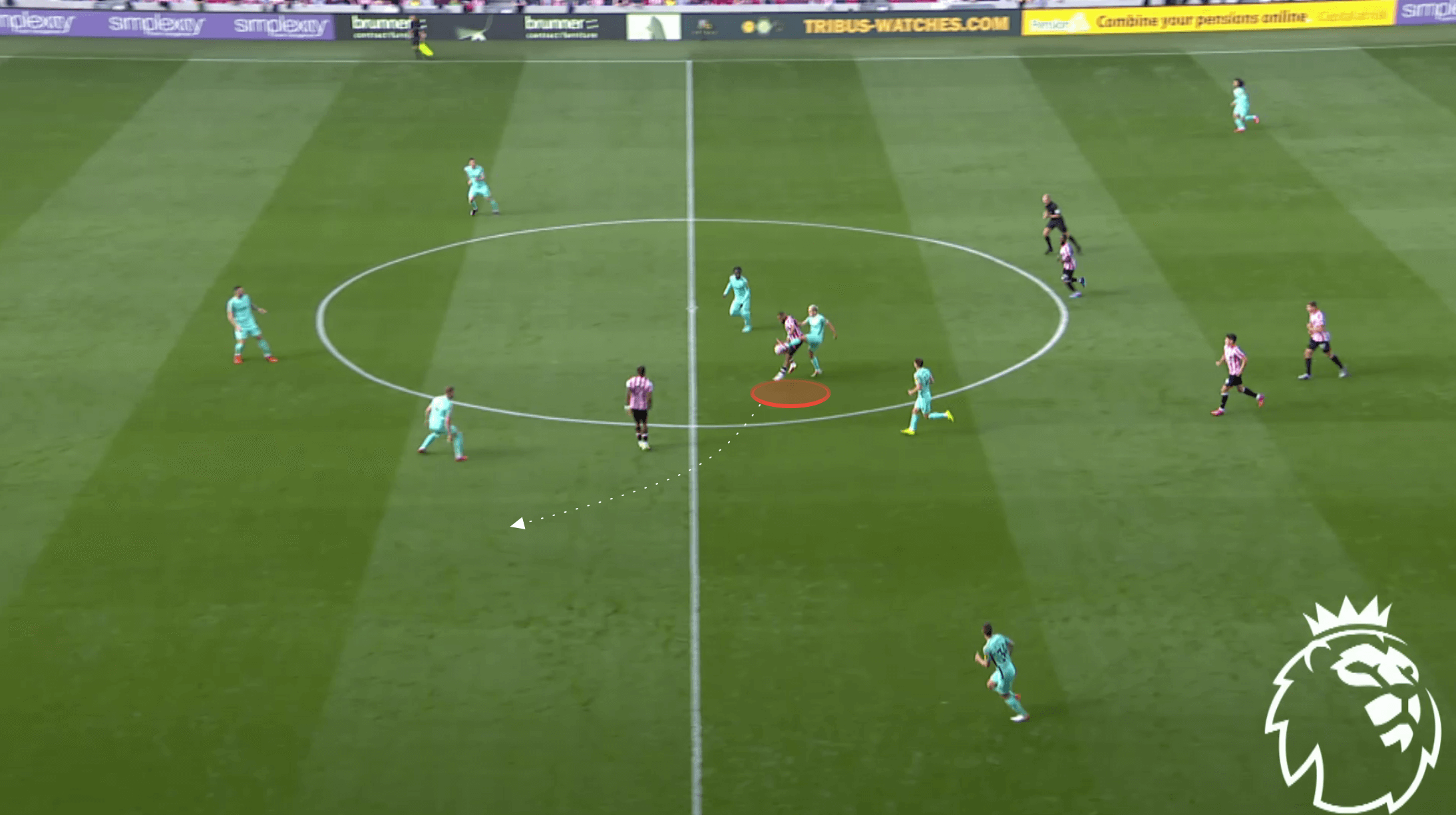 He does have a bad habit for giving up possession too cheaply on occasion in transition though. These incidences come specifically when Mbeumo receives in a deeper area, often inside his own half and close to the wide channel.

Mbeumo can look to receive on the half-turn despite being marked tightly. For a player who can show outstanding awareness this is a puzzlingly poor habit of his. 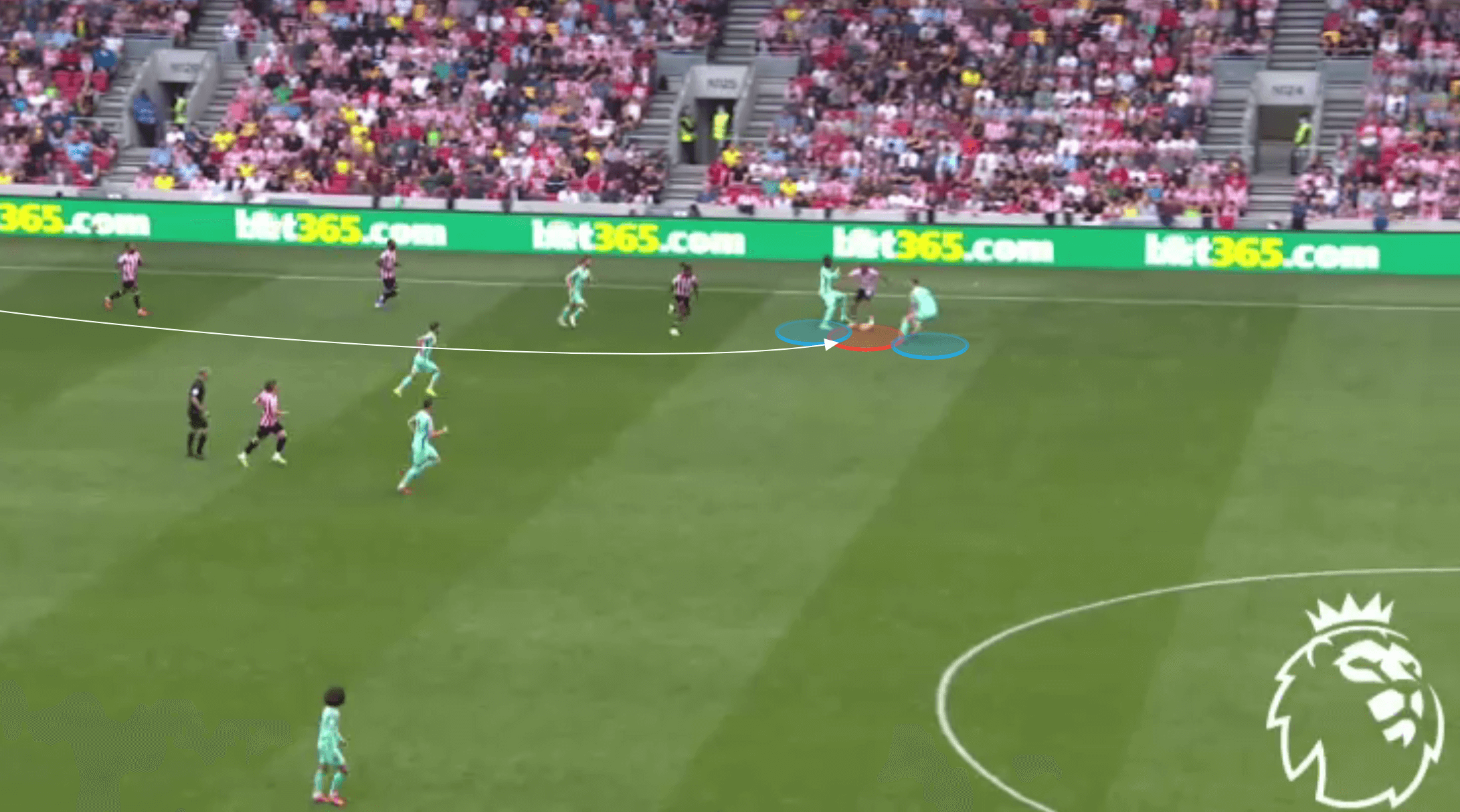 In the business end, Mbeumo has many good traits, however, he does need to work on how clinical he is. This was evident last season where his 10 assists disguised his eight goals, which was a sub-standard return in front of goal for a player of Mbeumo’s quality. He vastly over-performed against his 12.02 xG in his first season at Brentford but since then has minimally underperformed against it.

He so often looks to break the net with his finishing, opting for power, even when he looks to shape the ball toward goal. This often leads to him striking the ball in the air. Seeing Mbeumo blaze a good opportunity over the bar is all too common an outcome. 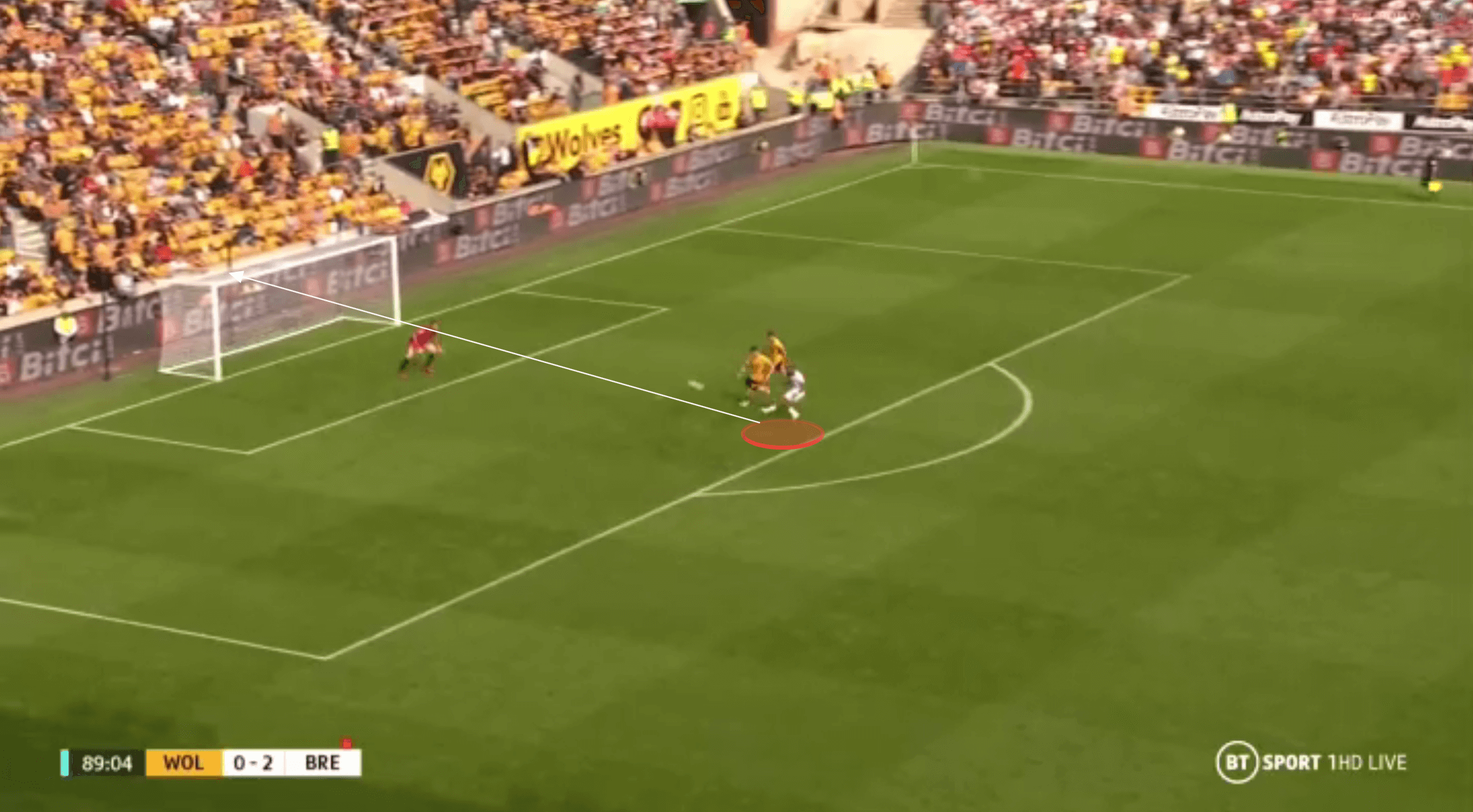 He can nevertheless forge a chance himself through his dribbling ability. Mbeumo can shift the ball from one foot to the other with lightning-quick speed. Inside the area, he may look to draw the tackle of an opponent before making a late switch from his right to his favoured left, cutting inside and firing a shot away through a crowded area. 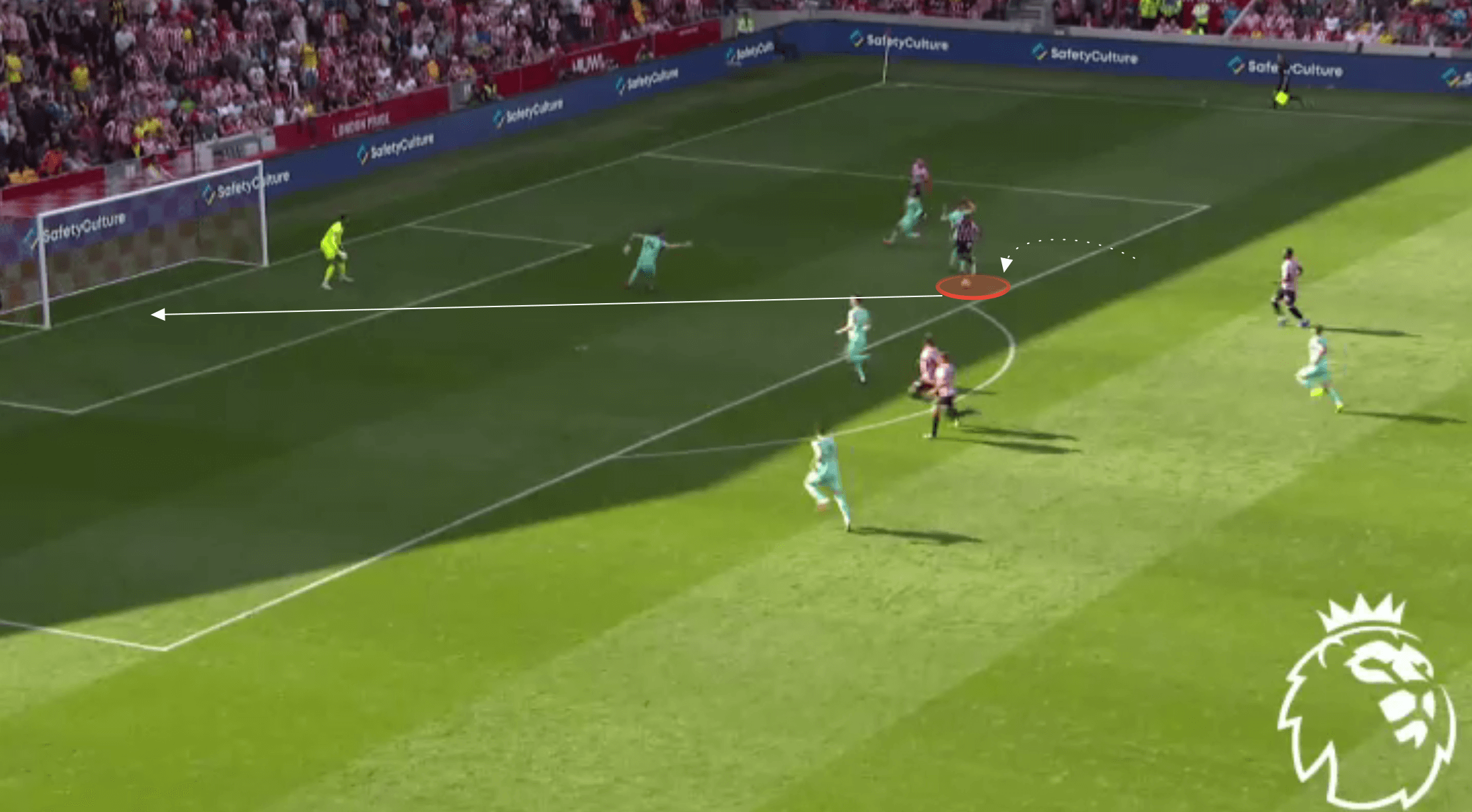 Even if he can be wasteful, Mbeumo’s movement is once more impressive inside the area. This was evident from his goal against Wolves where the French forward made an initial movement towards the front post. He will use this misdirection to simply draw his marker away from the area Mbeumo intends to attack. He actually made this movement twice, checking his run initially and preventing himself from going too early. However, he was able to still hit the space towards the back post, receiving the ball across goal, and finishing unmarked in this space. 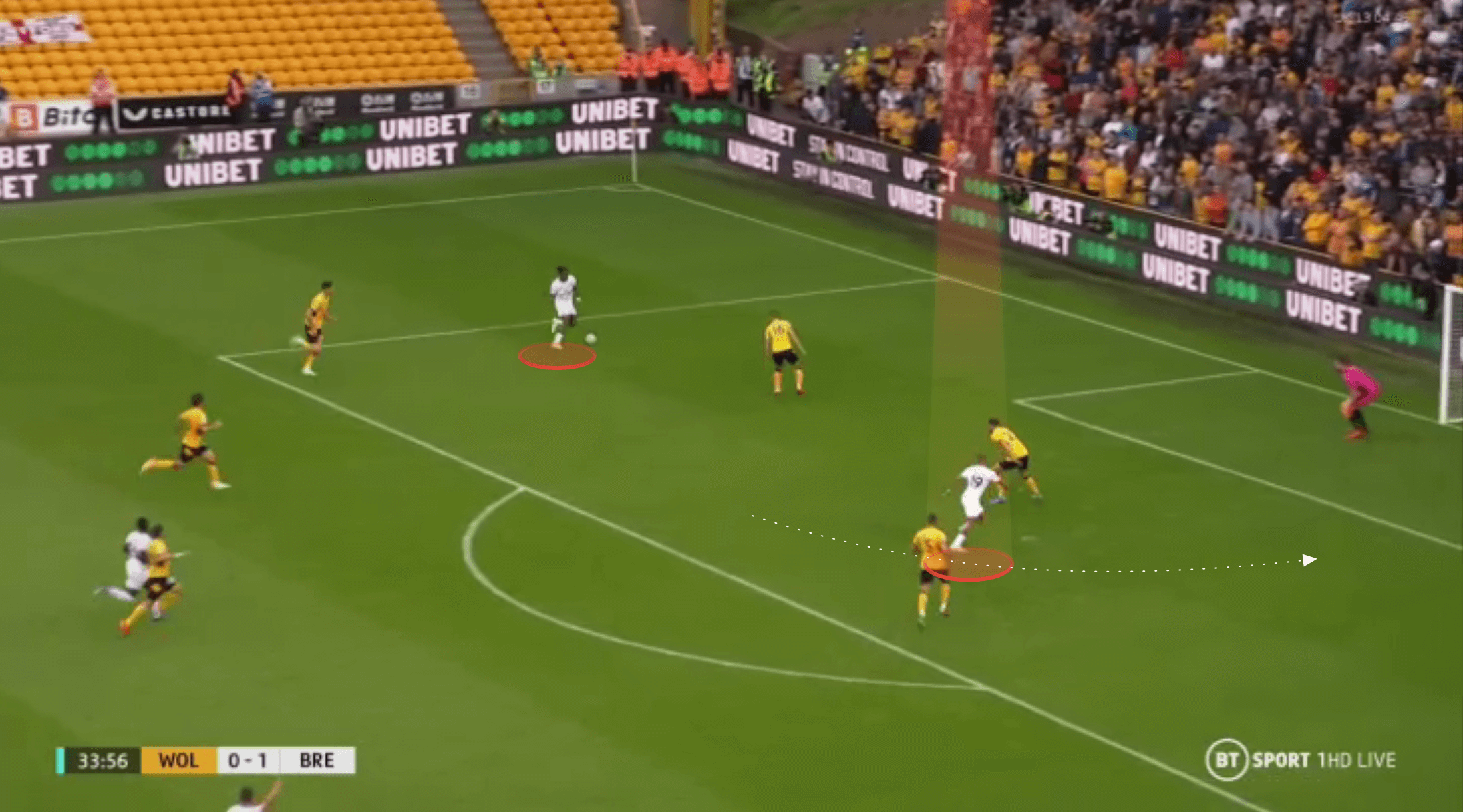 Mbeumo is in the right place right now for his development. He was ready to step up a level, showing quality consistently throughout his time in the Championship with Brentford. At 22 he needs to continue to play regularly and he will get this starting football with Brentford alongside Toney upfront. Yet if Mbeumo can begin to finish slightly more regularly, adjusting his penchant for choosing power over accuracy, then he may be a forward other teams in the Premier League, or even across Europe’s top five leagues, look at procuring away from Brentford, such is the quality dotted throughout Mbeumo’s game.