The second Canadian Classique in one week and for the second game in a row it is the visitors that walk away 0-1 winners having scored from a set-piece.

A much-needed win for the Premier League legend Thierry Henry’s Montreal. Although the Impact’s performance was not convincing in this game, it may well give them the confidence to improve from as the campaign progresses.

Greg Vanney’s Toronto almost equalled the MLS record for 19 consecutive home wins, yet it was their bitter rivals Montreal that put an end to that record-breaking ambition. Although their xG of 3.02 would suggest Toronto should have run out worthy winners, they failed to show any purpose in the final product against a well-drilled and compact Montreal defence.

The tactical analysis examines how both these sides set up to get success and nullify the opponent. The analysis uncovers both managers tactics in open play as well all the major talking points from this Canadain derby.

Playing fluid football and using both full-backs in every third to maintain overloads in the build-up, Vanney’s side were efficient and fluid playing their signature possession-based football. Later in the game, Vanney switched to a 4-3-1-2 then to a 3-4-1-2 to find the equaliser; however, in doing so, Toronto kept their same style of play.

Montreal: 4-3-3
Having played a 4-4-1-1 in the previous meeting, Henry switched to a 4-3-3.
This change helped unlock the counter-attacking potential of his side. Utilising his quick forwards that could exploit a high defensive line of the opponent, Henry kept a 4-3-3 for the full 90+ minutes.

Starting with a short pass from the goalkeeper inside their box, Toronto would build-up through the thirds until they reached the edge of the Montreal box. Here the Reds looked to create short-sharp combinations out wide between the full-back, wide midfielders and centre-attacking midfielder to penetrate, cross and score.

Whether Montreal applied a high press or a mid-block Toronto always seemed calm and comfortable to play through the pressure, only to arrive in the final third with adequate numbers to mount a dangerous attack.

The above tactical illustration shows Toronto’s shape and principle movements in the final third. On the left we see both full-backs occupied highest-widest point as they served to stretch the Montreal back four and provide out-swinging crosses to the centre-forward.

The movement of the CAM and both wide midfielders were crucial in unlocking the back four and penetrating from the half-space. Their movement also served to create space for both central-midfielders to receive and switch the play without pressure to the Montreal’s weak side.

Finally, on the right, we see Toronto’s options as the ball arrives at the full-back in the final third.
First looking to serve the centre-forward with a cross or play into an underlapping run within the half-space to arrive in a better crossing position. If that was not available, then the ball was able to be recirculated by any of the three central players to Montreal’s weak side.

Here the Red’s would again look to utilise the most prominent attacking option from the half-space or wide channel.

Below we will take a look at a moment which captures Toronto’s attacking principles before arriving at the final ball into the striker. 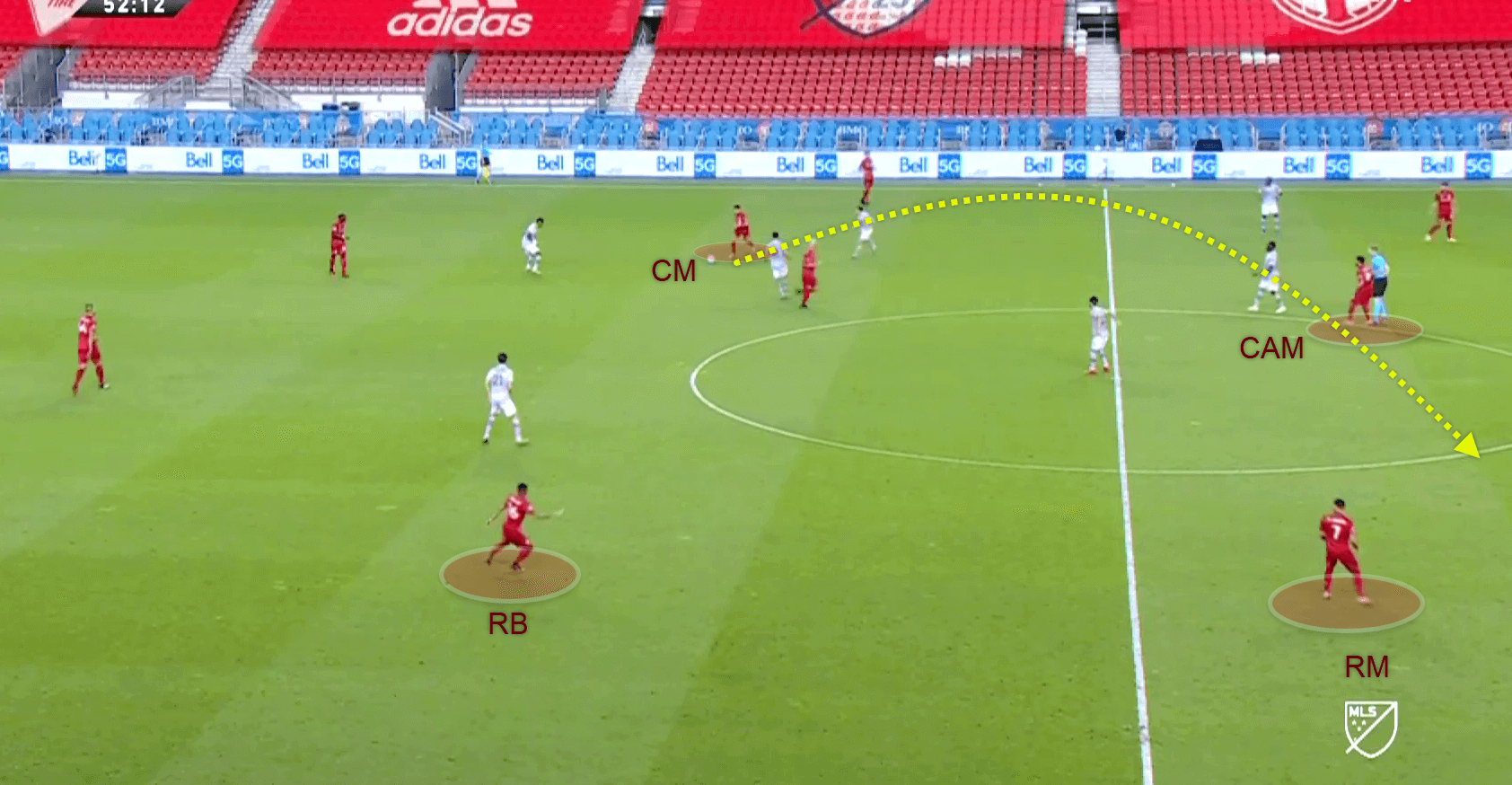 As the play developed from deep on Toronto’s left, central-midfielder Marky Delgado successfully finds the right-midfielder Pablo Piatti on the far right with a long diagonal pass. 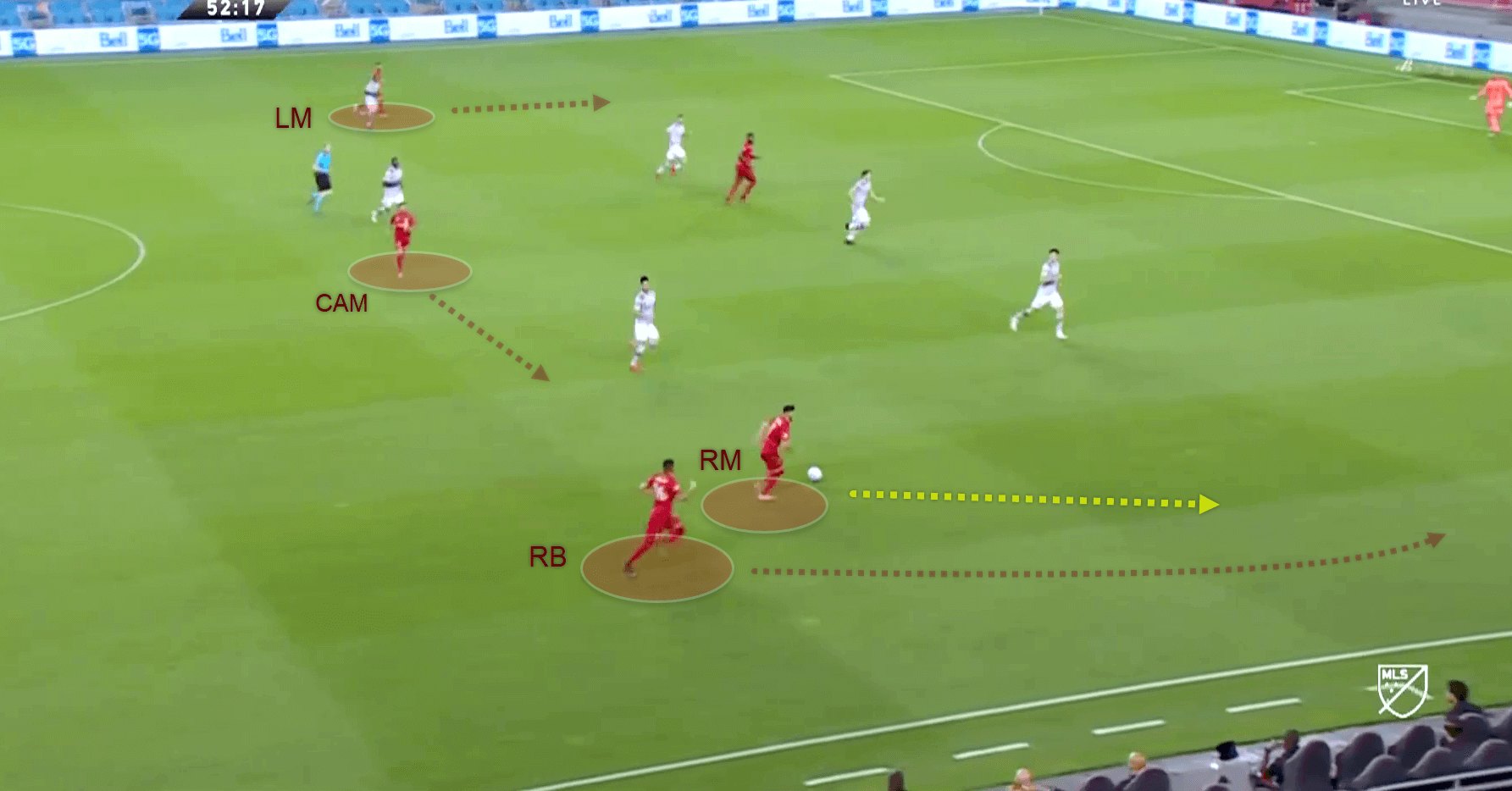 As Piatti drives forward into the final third, right-back Auro is quick to catch up and advance further forward to the ball carrier. 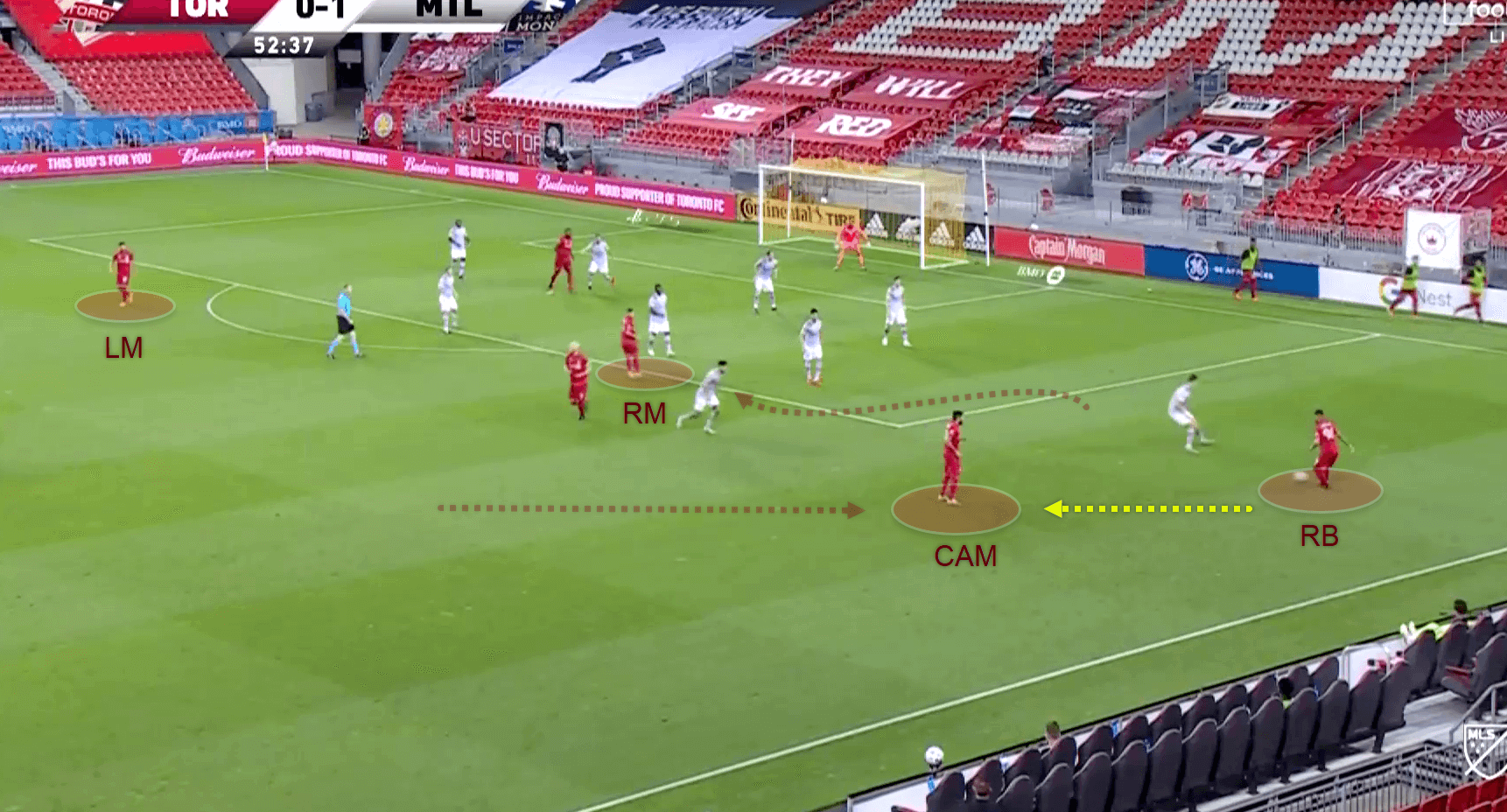 As Auro holds up the play to discover passing options inside, both the right-midfielder and central-attacking-midfielder Alejandro Pozuelo make a horizontal rotation to receive a pass unmarked. Piatti remains inside to take himself a potential target for a cross.

As Pozuelo see no immediate opportunity to play into the box or cross, he opts to play a firm ground pass to switch the play to Montreal’s weak side where left-back Justin Morrow will overlap the left-midfielder Johnathan Osorio. 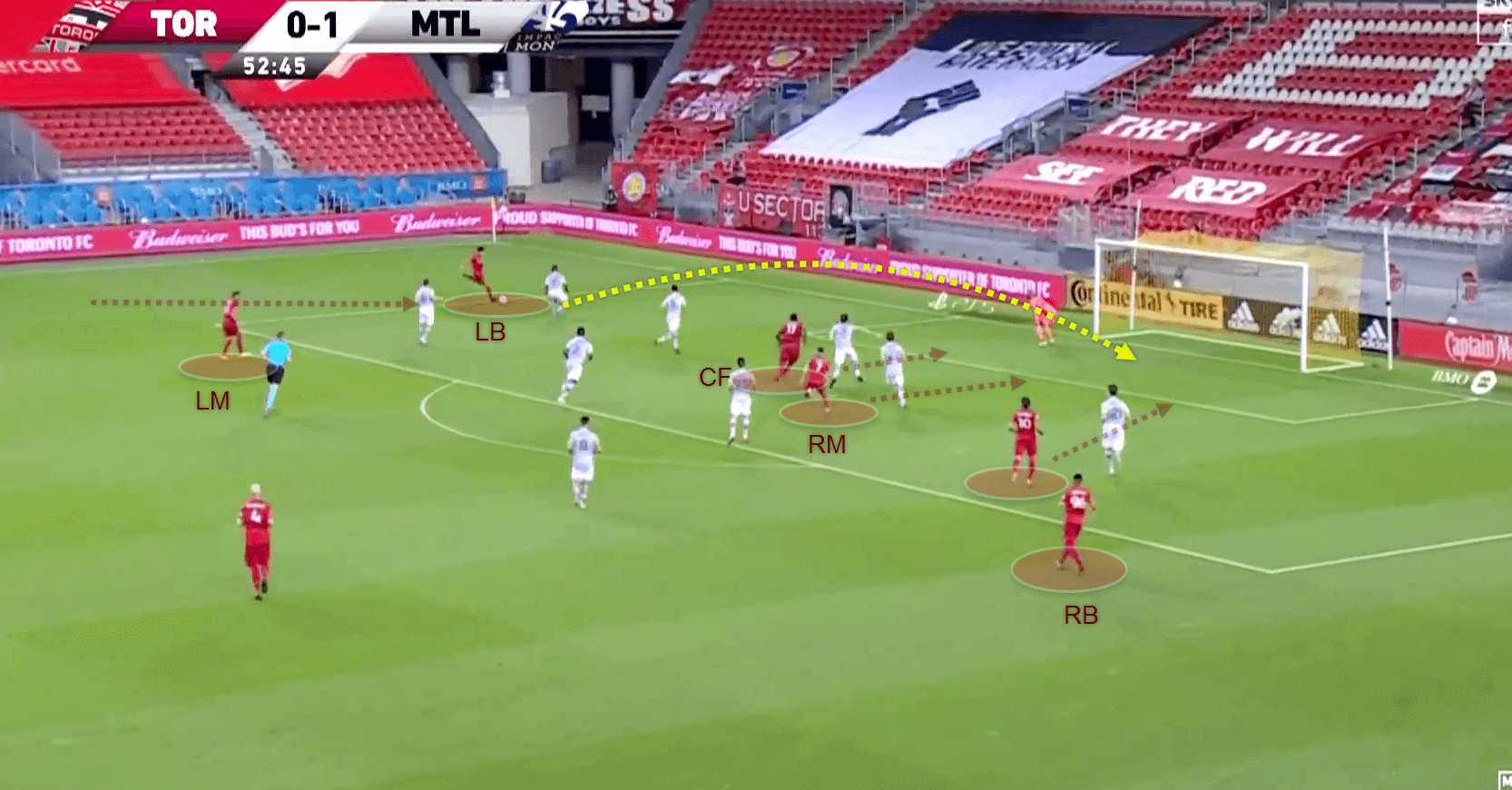 Osorio feeds the run of Morrow, and without hesitation, the left-back delivers a dangerous cross to meet the head of the American centre-forward Jozy Altidore.

Above we see the heat map of Alejandro Pozuelo, the 28-year-old Spanish midfielder was key to Toronto’s attacking success. His freedom of movement across the pitch meant he was difficult to mark; he caused an imbalance in Montreal’s defence by receiving in the half-space and facilitated the opportunity for wide midfielders to make penetrating runs. As he forced the Impact’s defenders to step out and engage him in the channels, this allowed the nearside full-back in support to find ample opportunity to receive the ball and play crosses into the box.

No impact from Montreal’s high press

There was a Liverpool-esque look to Montreal’s high press; the positions seemed correct; however, they lacked sufficient intensity to cause Toronto any real concern.

Both wide forwards screened the pass to the full-backs and remained in the line to pressure the centre-backs, while the centre-forwards and central midfielders man-marked their opposite numbers. Montreal seemed to have the advantage here however they failed to press with any sort of intensity and ultimately failed to get any success from the high-press. 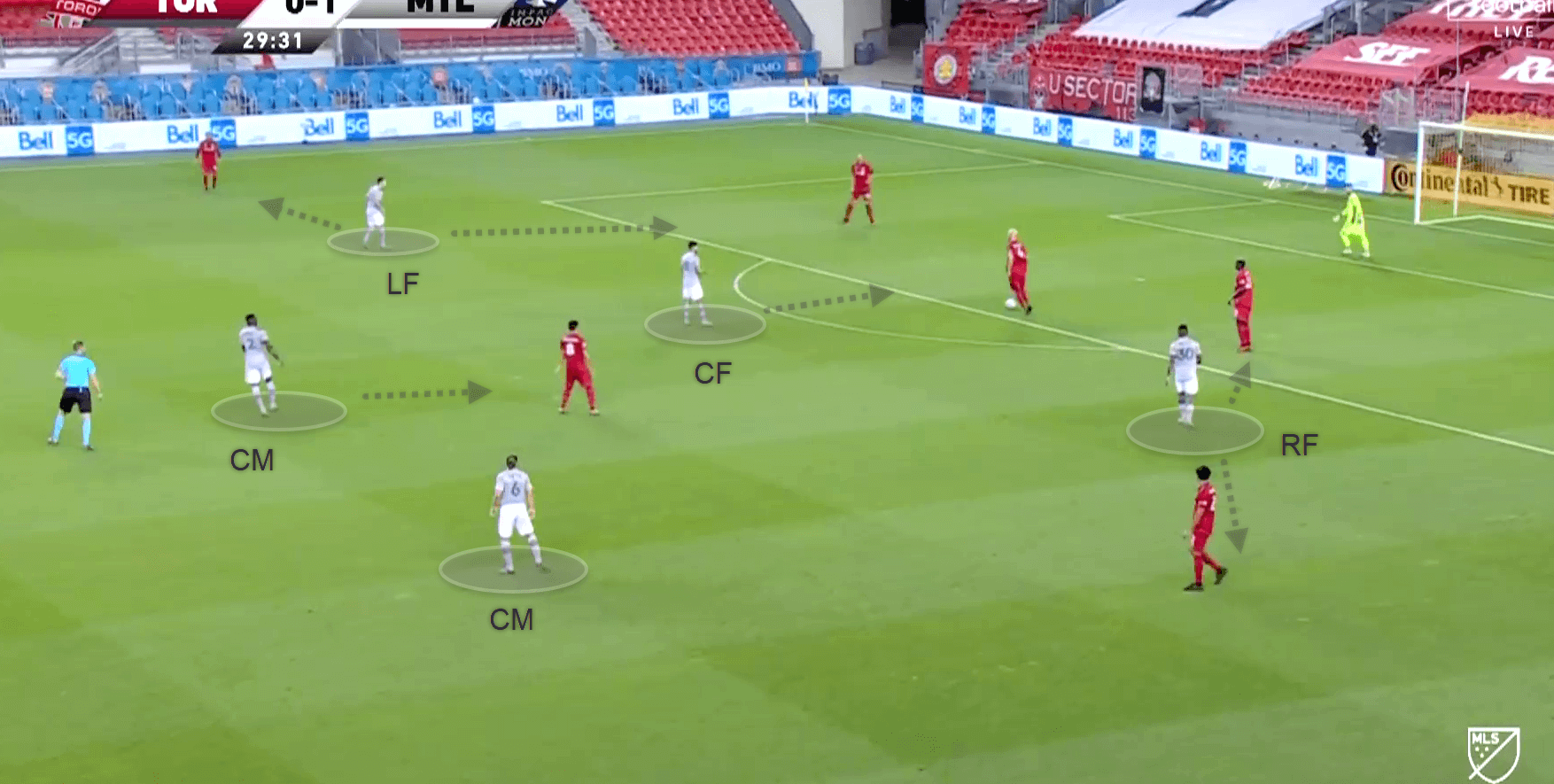 Above, we see how Montreal formed a sufficient high-press by numbers and positioning. However, with minimal effort, Toronto was able to play forward through the gaps as all three front players hesitated to engage the press.

The data above shows both sides passing network, Toronto repented by the left and Montreal by the right. As we can see both are very contrasting sets of data, yes we know both sides differ in style, however, the density of the lines between Toronto’s goalkeeper and back-four show Montreal done very little to disrupt the Red’s build-up phase.

It was clear Thierry Henry set his team up to draw in the Toronto midfield and full-backs in the build-up phase, only to exploit the space left vacant with long balls to the pacey wide forwards of Lassi Lappalainen and Romell Quioto.

Although Montreal only amounted an xG rating 0.78, it was the 1-vs-1’s in the final third that would make or break the Impact’s chances. Although Montreal failed to score from open play, it was the clinical execution from centre-back Rudy Camacho from a set-piece that gave the Blues all three points.

The tactical illustration above details how Montreal looked to break away and create chances from deep. In the build-up phase, both full-backs remained deep to invite pressure and create space higher up the field. Having numerical superiority in central midfield meant that Montreal could easily find an outlet to turn and play forward. 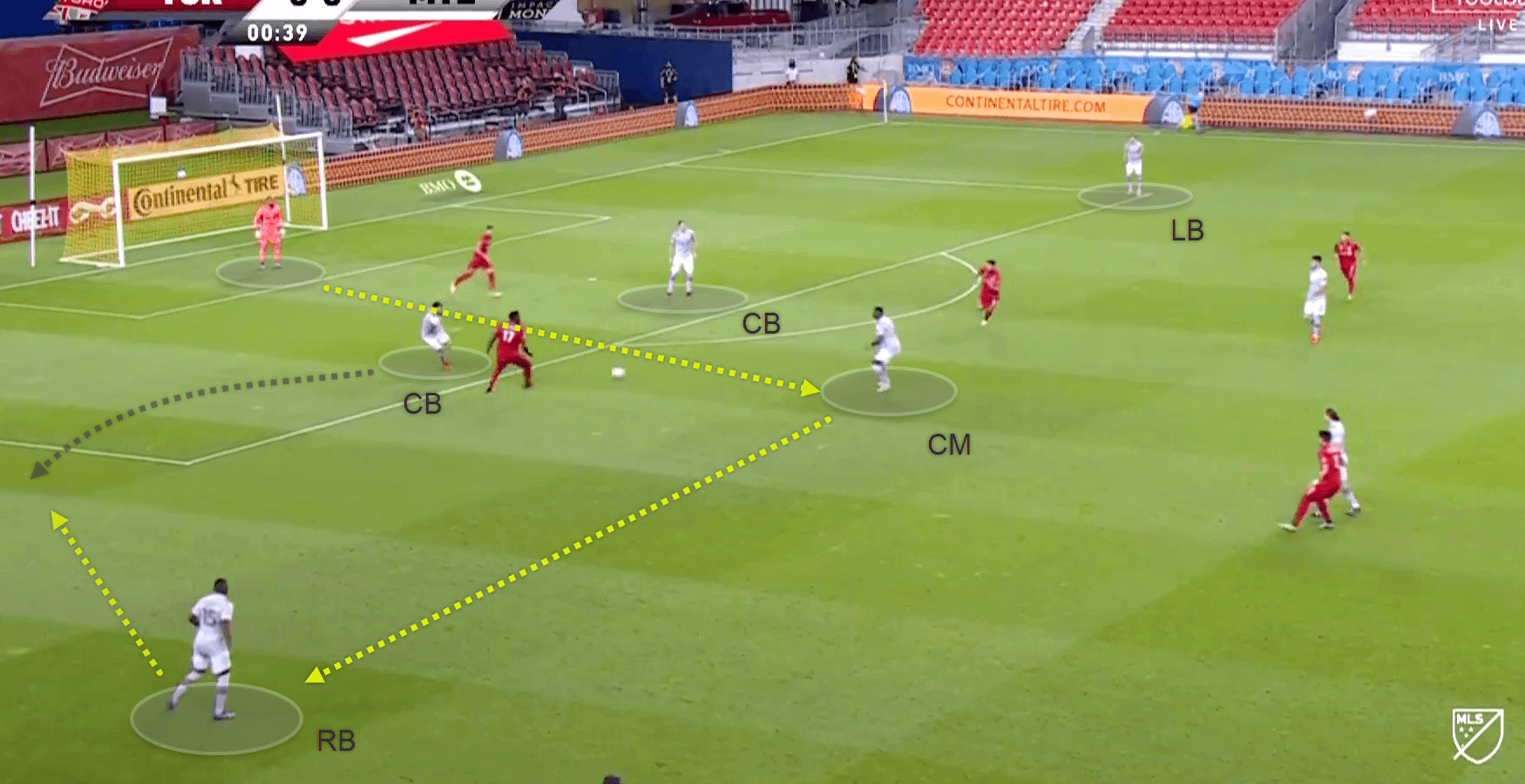 Playing out from the back with a flat back four, Montreal goalkeeper plays a pass into midfield which is then played wide to the right-back. 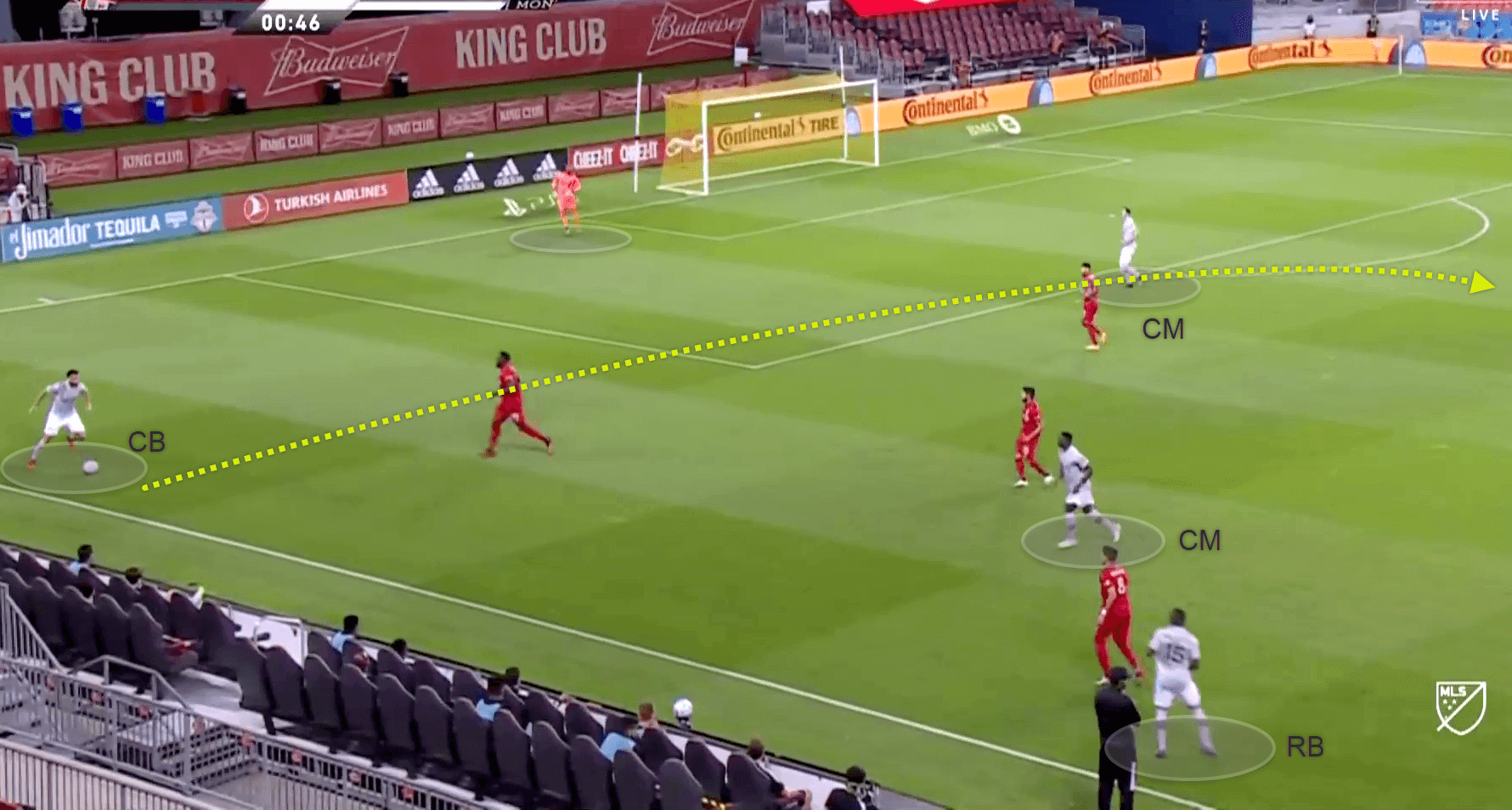 After the right-back lays off a pass to the centre-back, the defender plays a long pass forward into midfield. 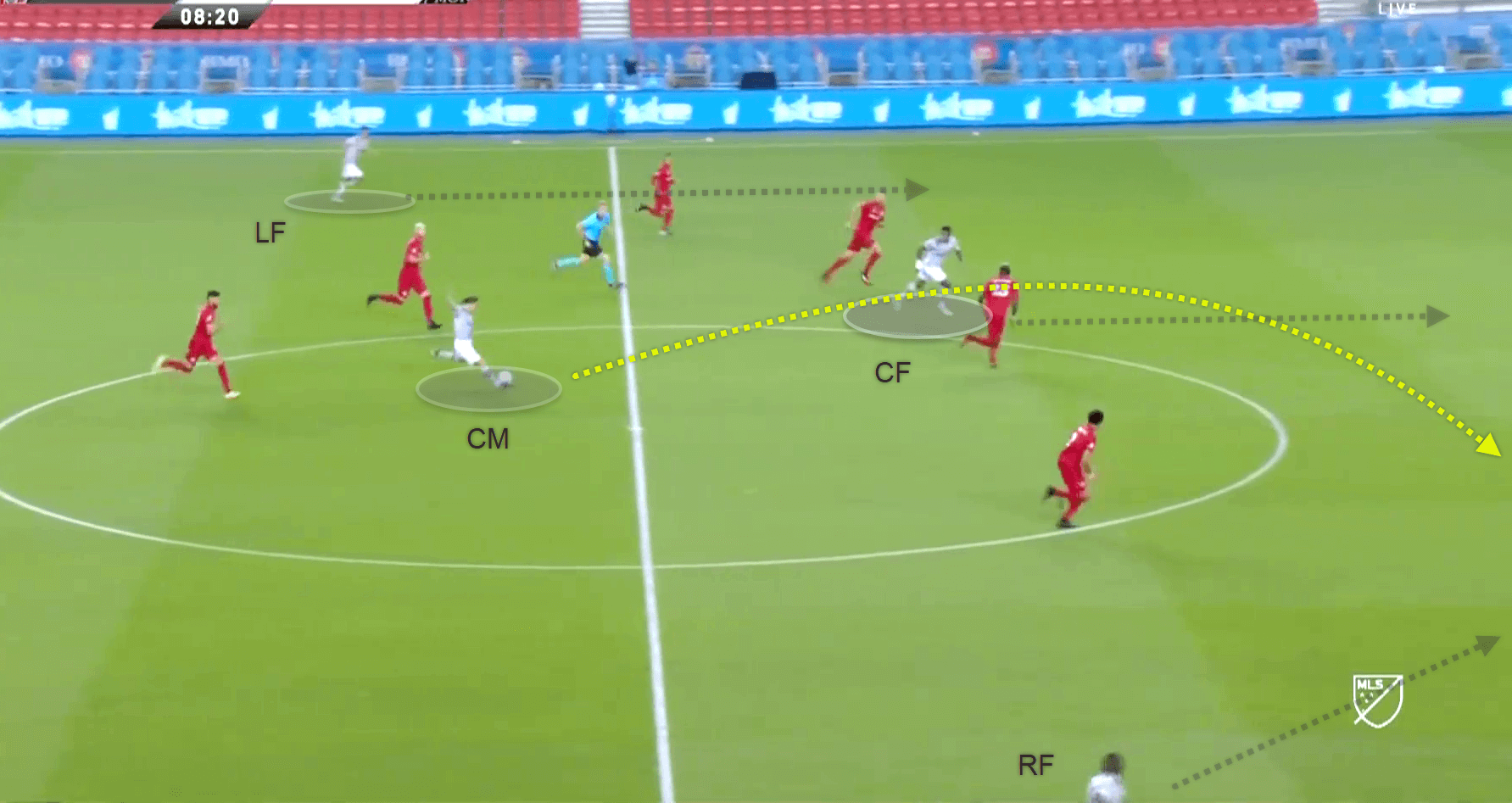 The central-midfielder plays a long pass early into the channel to meet the run of the right forward Quioto.

Quioto is in an excellent position to create a dangerous attack, as he has blistering pace to get by defenders, he is a player who can draw a foul in a dangerous position. Secondly, he has support arriving on his left to make it a fruitful attack. 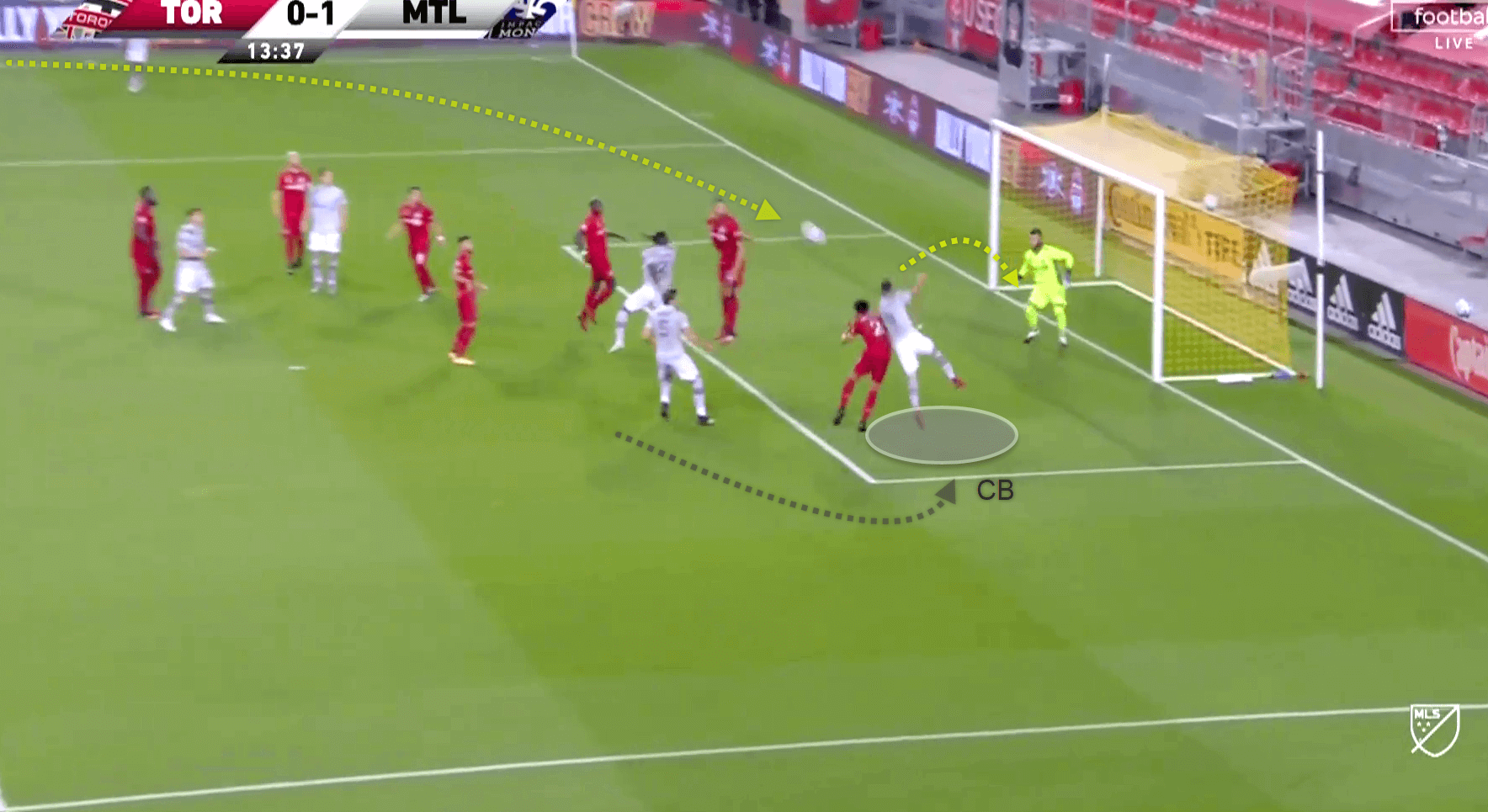 The games only goal, Camacho converts from a set-piece at the back post on 14 minutes to make it 0-1.
Looking like an option pulled from the set-piece handbook, the timing movement were clinical.

Although the xG was 3.02 vs 0.78 in favour of the hosts it was the visitors who scraped a 0-1 win.
Perhaps it will not be the performance that gives them satisfaction yet a win in the Canadian Classique against their bitter rivals comes with its own good feeling. Perhaps this will even give Henry’s side the confidence boost they are looking for ahead of the MLS season.

Toronto FC will feel this is a tough defeat to swallow as they proved themselves a better footballing side with greater chances in front of goal, yet those chances went unconverted to their own detriment.

The sides meet again on Thursday, September 10th; perhaps unlike the previous two fixtures, we may yet see goals scored from open play in contrast to set-pieces as we have seen from the previous two meetings.