Even though Turkey consists of 80 million football enthusiasts, the national team is rarely seen as a team operating at world-class level. Nonetheless, from time to time, they are up to some surprise, as their third place at the world cup in Japan and South Korea back in 2002. Back then, Şenol Güneş led Turkey to their best ever result in an international tournament. As of March 2019, he took over again after his Romanian companion Mircea Lucescu was sacked. Eleven games have been played since, with Turkey winning eight and drawing two of those games. They were only beaten by Iceland with a score of 2-1. In total, Turkey scored 20 goals and only conceded three during this period, which is impressive bearing in mind that they did not even qualify for the 2018 world cup in Russia and also finished the UEFA Nations League group stage against Sweden and Russia with only one win and three loses prior to the Güneş era. The highlight during this eleven game period was for sure the two games against the recent world champion France. Turkey won 2-0 at home and managed to hold them to a 1-1 draw in Paris.

In this tactical analysis in from of a scout report, we will examine how Güneş was able to improve the team and how his tactical ideas turned Turkey into a great side.

Turkey does what the game requires

In all the games, Güneş used a 4-3-3 formation. However, on the pitch, his side was always flexible, changing positions just according to what the game requires. Against Iceland for example, it was necessary to build a back-three in the build-up with the defensive midfielder falling between the centre-backs, as Iceland were constantly pressing with two strikers. 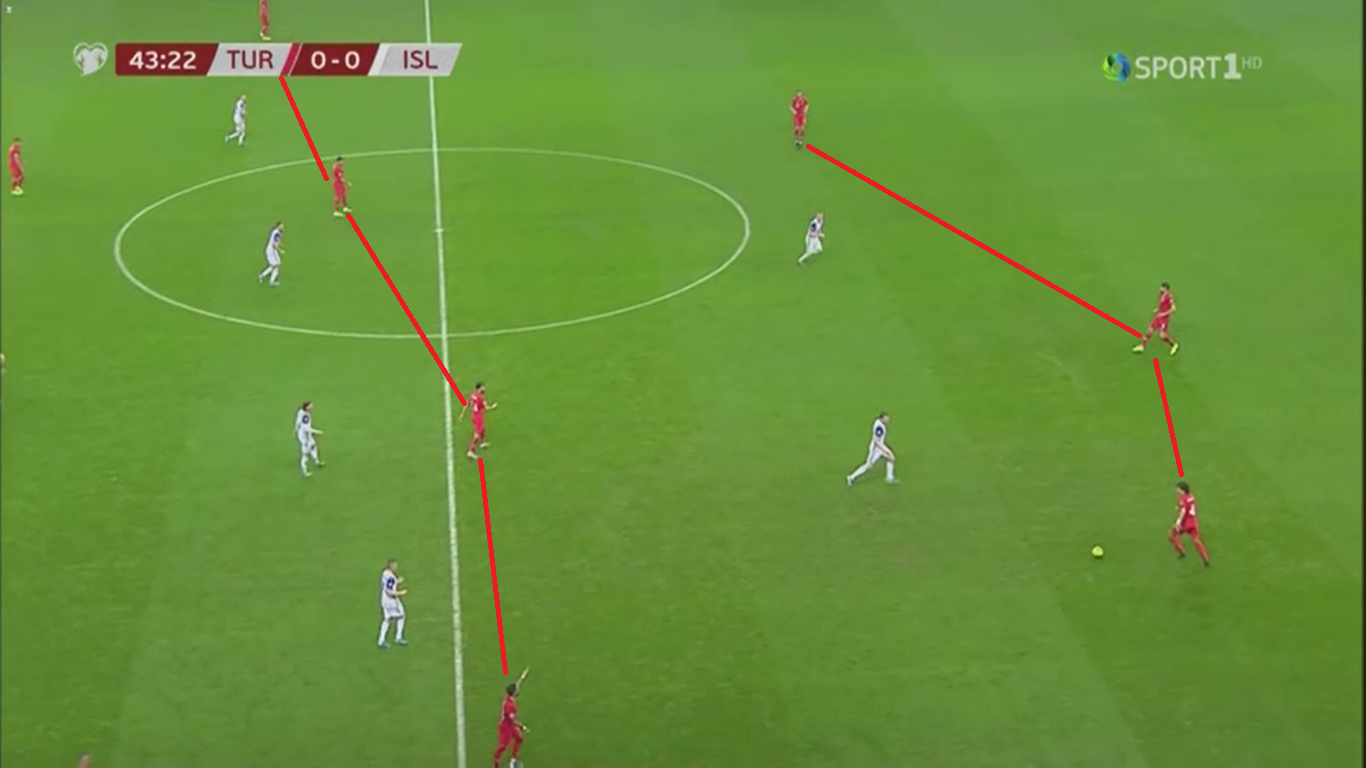 Since Turkey only needed a draw in that game to secure the qualification for the UEFA Euro 2020, the main focus was to maintain possession. So even though the positioning in the image above seemingly does not create any possibilities for a breakthrough, this is not a problem as the main intention is somewhat different. In this 3-4-build-up-shape, the midfield line consisting of the two central midfielders as well as the two full-backs is positioned in front of Iceland’s midfield. Thus, Turkey do not create any depth, but they can easily maintain possession. Statistically, the possession figures were 63%-37% in favour of Turkey in that game, backing up what we see in the image. 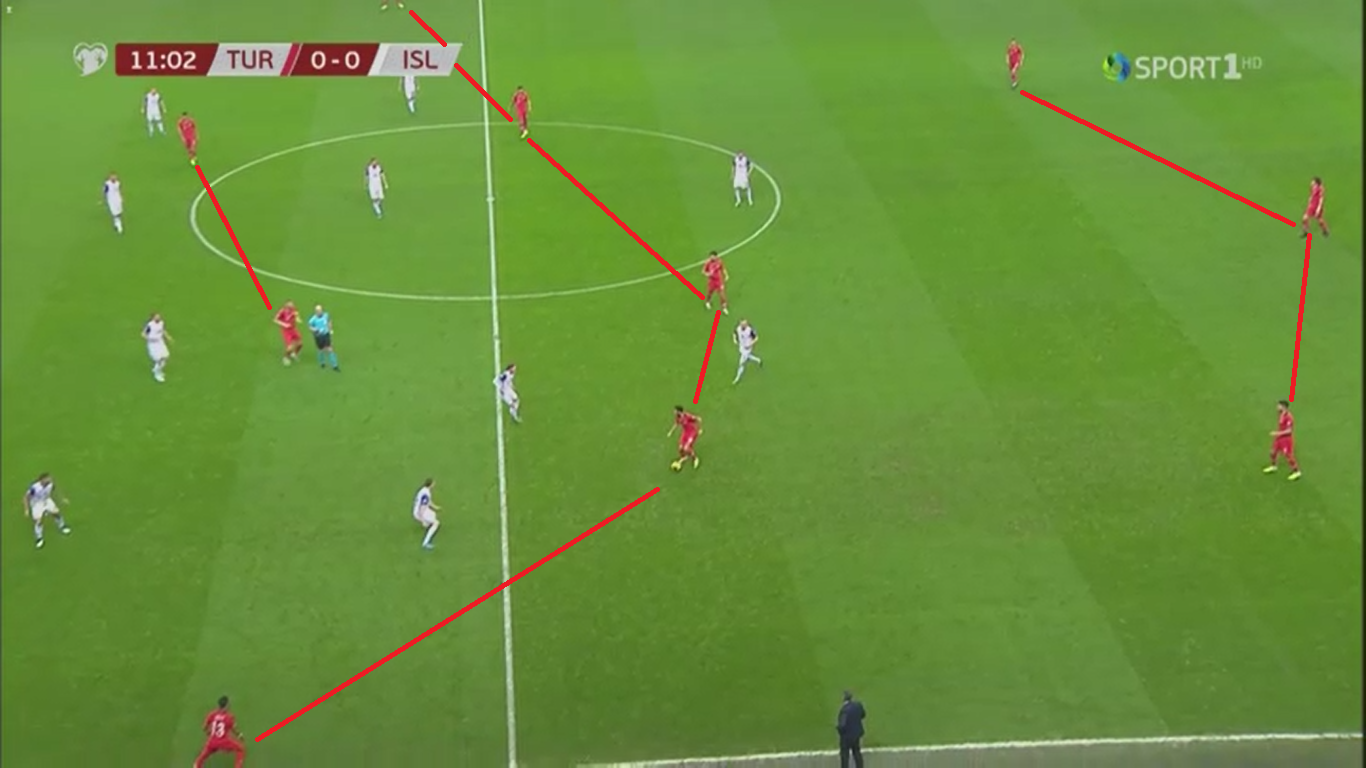 When the ball was progressed into the midfield area around the halfway line, Turkey were able to provide a lot of passing options, like in the image above. While there are the options to play it out to the wing or even get the ball forward playing it between the lines, the safe variation of just playing it back to the back-three was always possible.

Flexibility is the key

In other games, the positional approach changed, as Turkey tried to get more players into the final third. A great example can be seen in the image below. 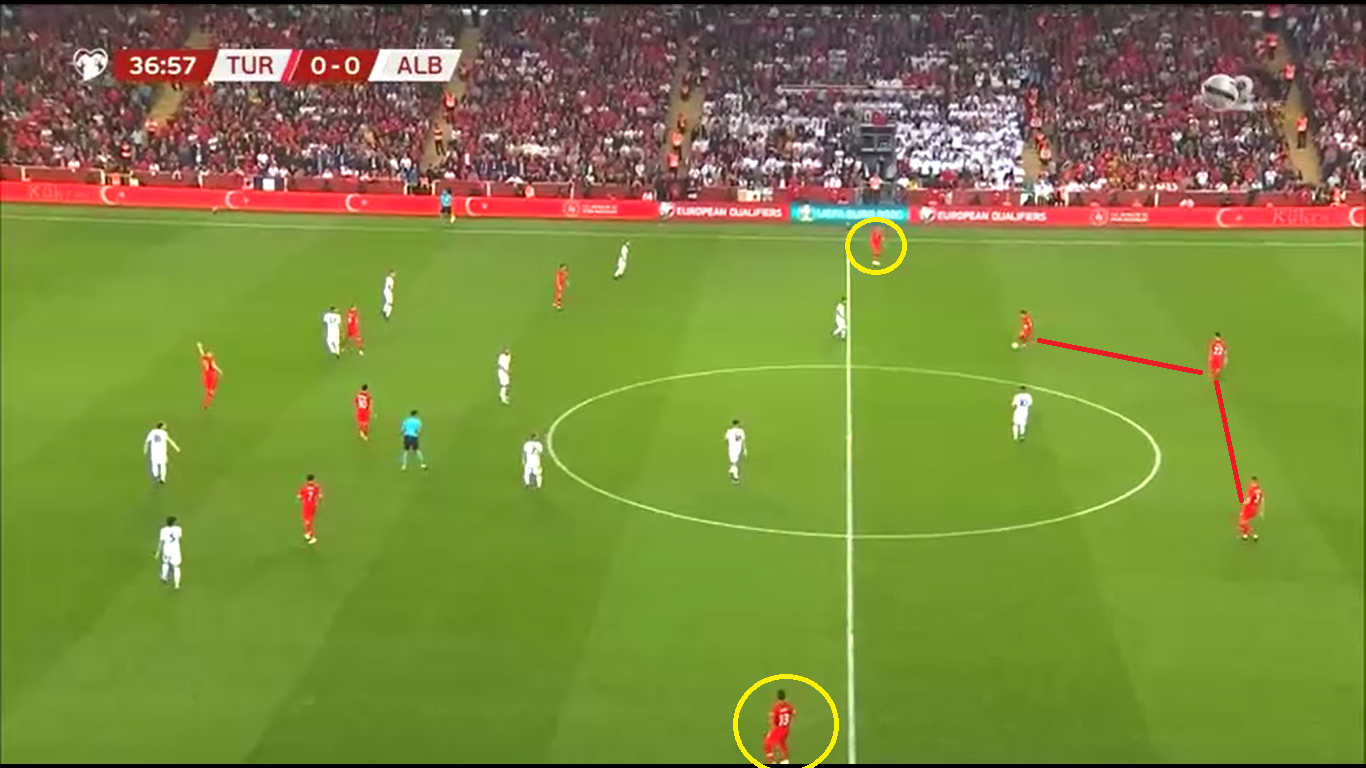 Again, the defensive midfielder drops back to support the centre-backs. This time though, it is not a clear back-three, but rather an L-shape. The full-backs do not push all that high, but instead, the central midfielders act like additional forwards. In case of long balls, this ensures that enough players are around the ball to secure the second ball or start a gegenpress.

Even though the midfielder dropping back may change, the L-shaped build-up seems to be constantly used. 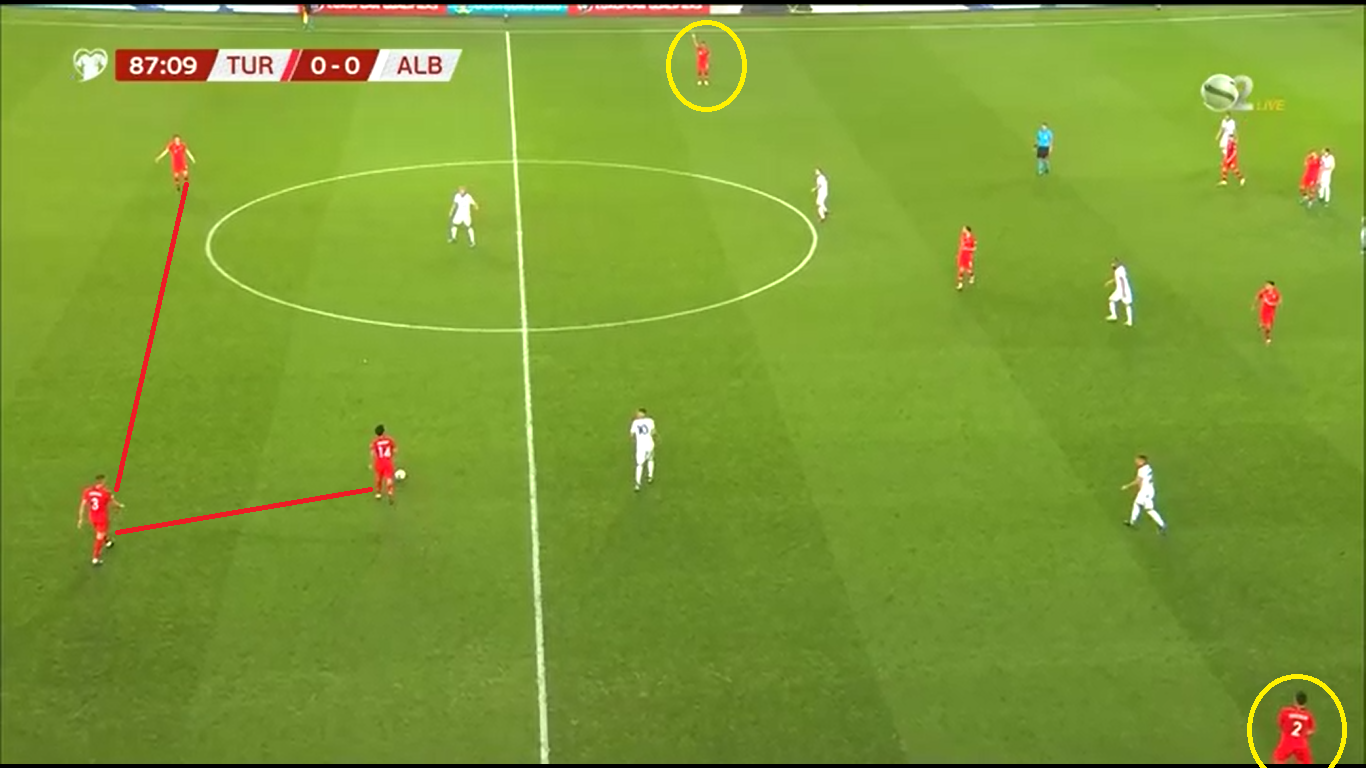 Depending on how the game evolves, the positioning of the full-backs varies though. Nonetheless, they do not push extremely high up to the offside line. However, it is strange that such a shape is used, but it does give the midfielder a lot of freedom when he drops back. Here, Mahmut Tekdemir dribbles with the ball towards the centre, which he would not be able to do if a strict back-three was established. 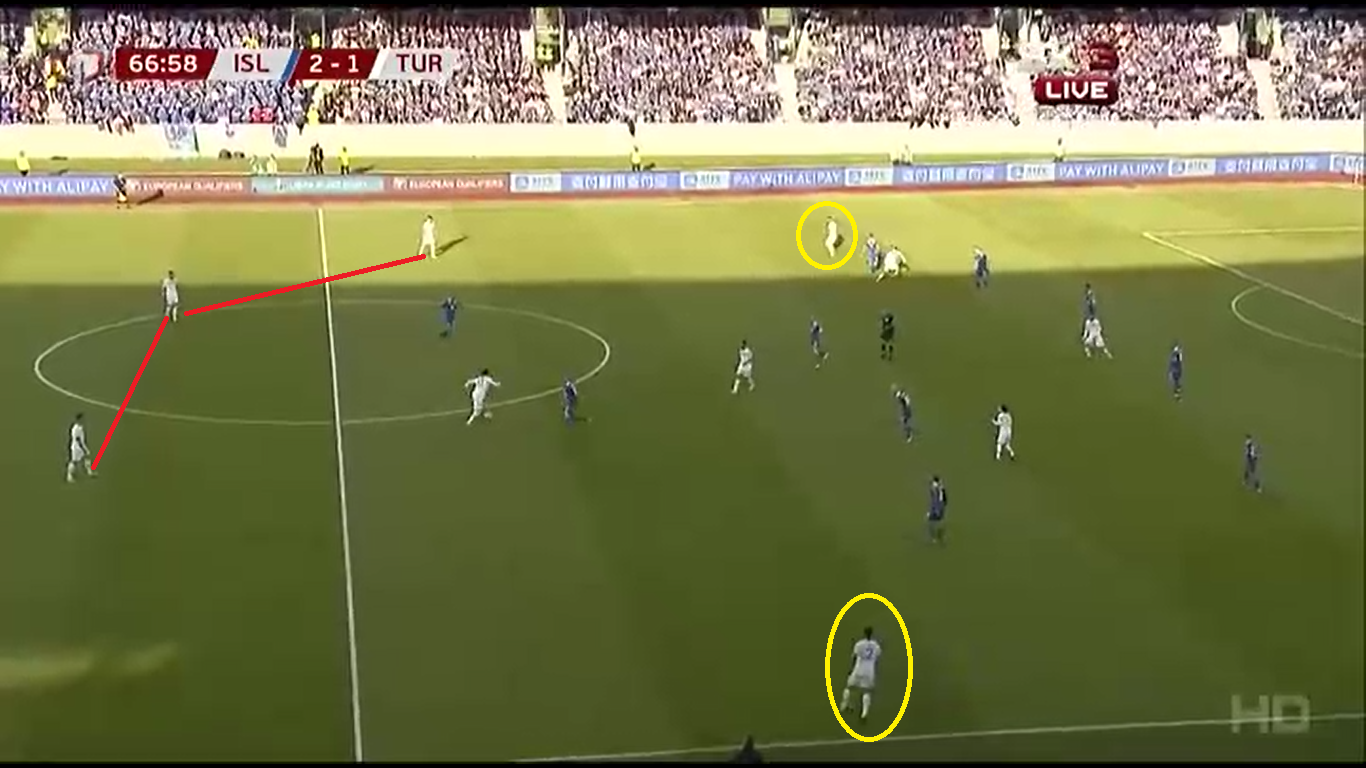 In the image above, we can see that shape again, but this time an additional midfielder, Yusuf Yazıcı drops back and then dribbles forward with the ball. Güneş seemingly encourages his players to feel free and be creative. Again, the positioning of the full-backs also varies.

In terms of flexibility, the same applies to defensive patterns. Güneş wants his team to defend compact with a certain structure, something Turkey missed for some time. However, he does not insist on certain formations but rather wants players to actively recognize in which positions they are needed to defend the situation properly. 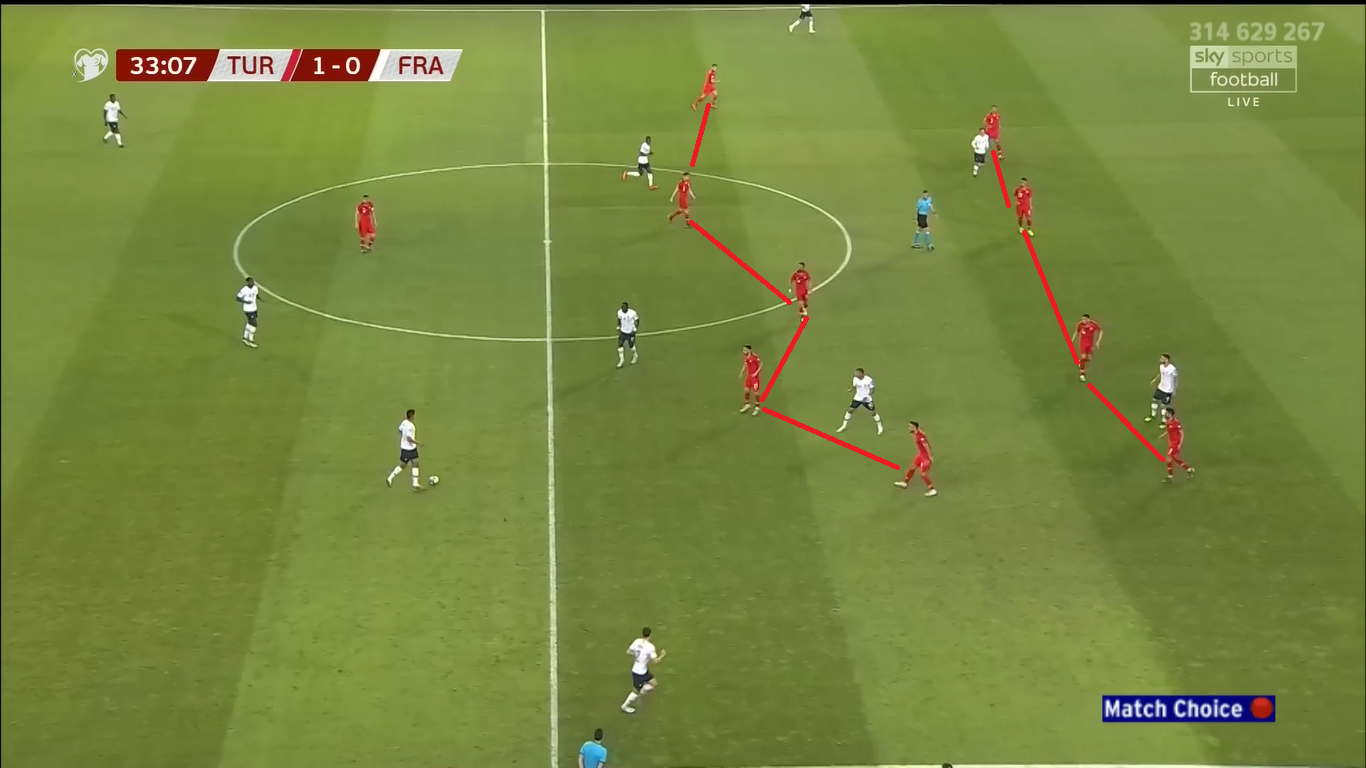 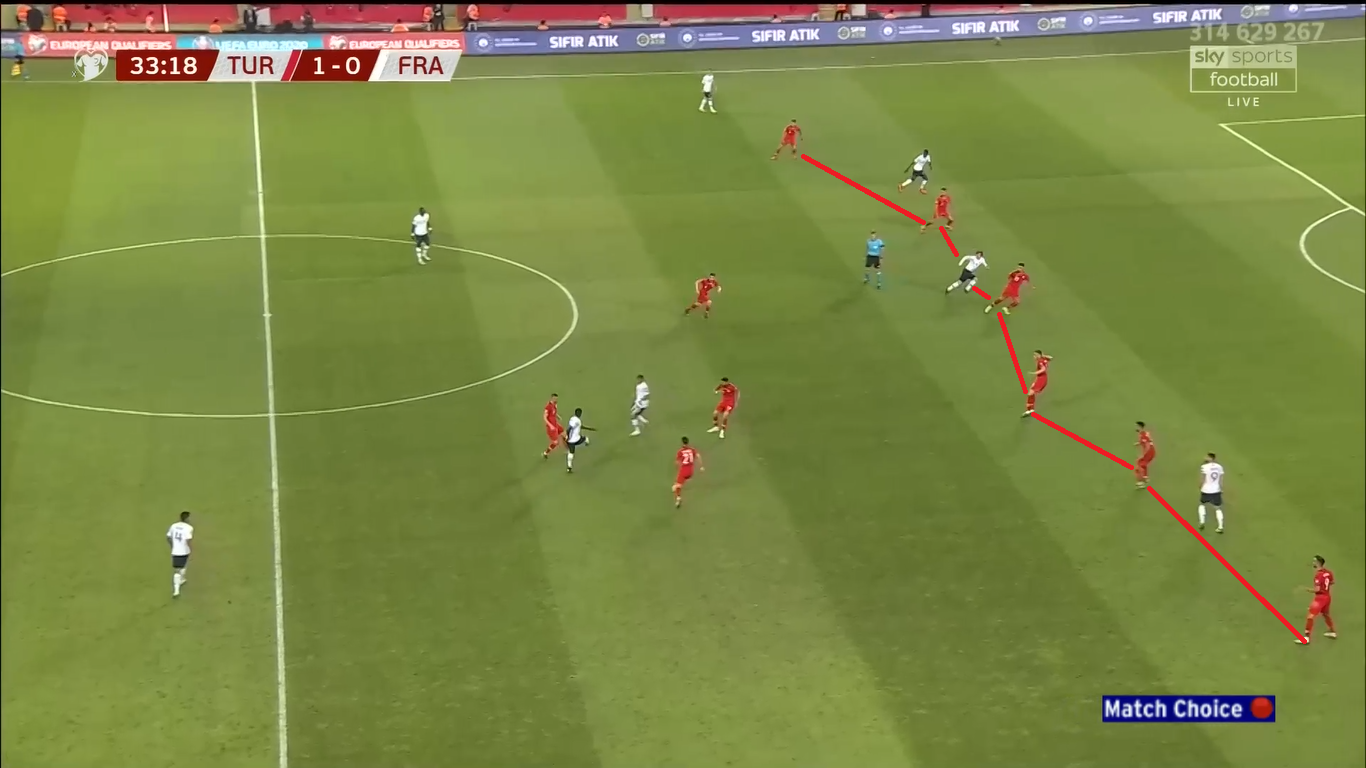 However, only a few seconds later, the wingers drop back to create even a back-six. They do this because of the French full-backs pushing high and the risk of a long ball being played to either wing. The remaining three midfielders stay in the centre and with the help of centre-forward Burak Yılmaz, they make sure to put pressure on the ball so that the long ball cannot be played precisely.

Again and again, a fluid change of formations can be observed, like in the image below. 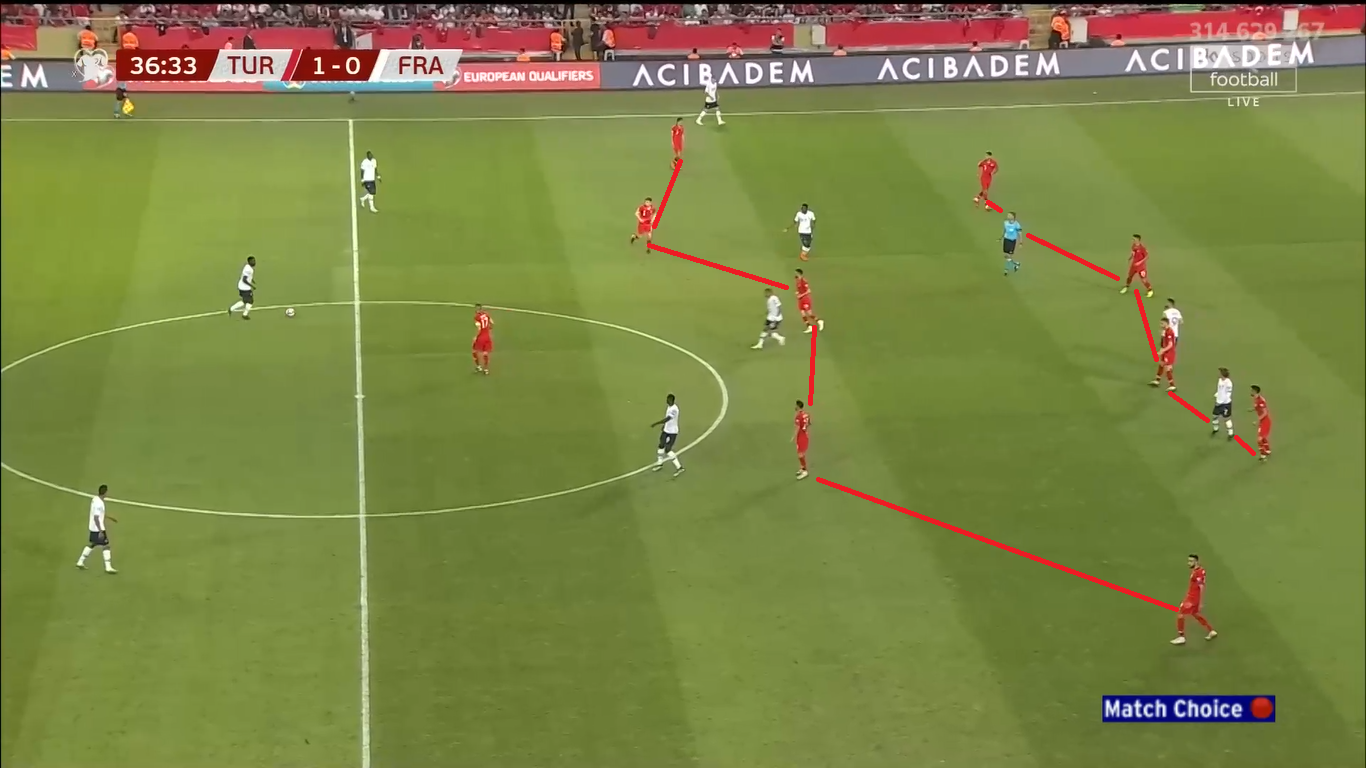 Here, it looks like a 4-5-1 formation again. However, it could also be interpreted as a 5-4-1 formation. If the lines were drawn differently, it could not be argued against a back-five, especially if the screenshot was taken one or two seconds later when left winger Kenan Karaman was positioned even a few meters deeper.

Also, Güneş always prepares small details to watch out for. In that great game against France, passing lanes to Antoine Griezmann should always be closed. There is a situation, in which right winger Cengiz Ünder at all cost closes that lane. 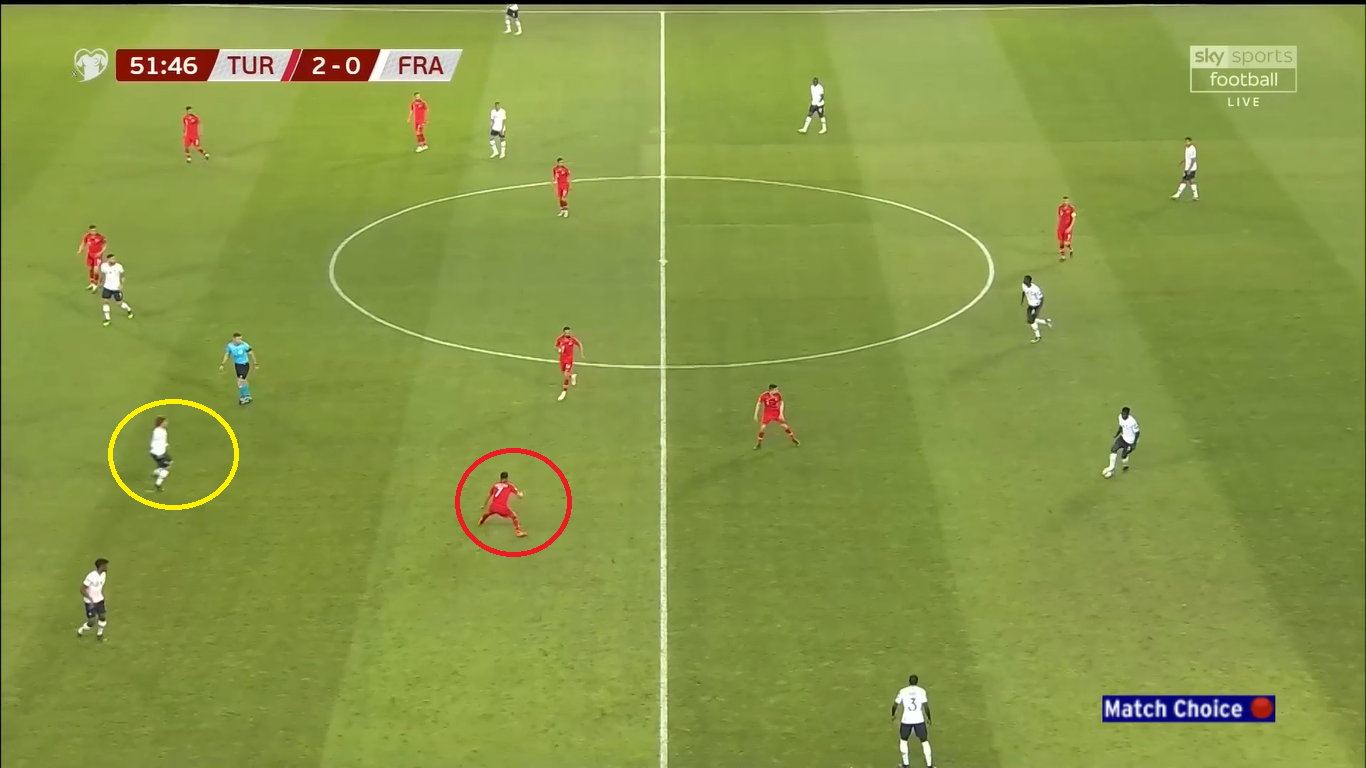 Being aware that he is too far on the wing, he makes a few quick steps into the centre to close the passing lane. This forces France to play the ball out to the wing. 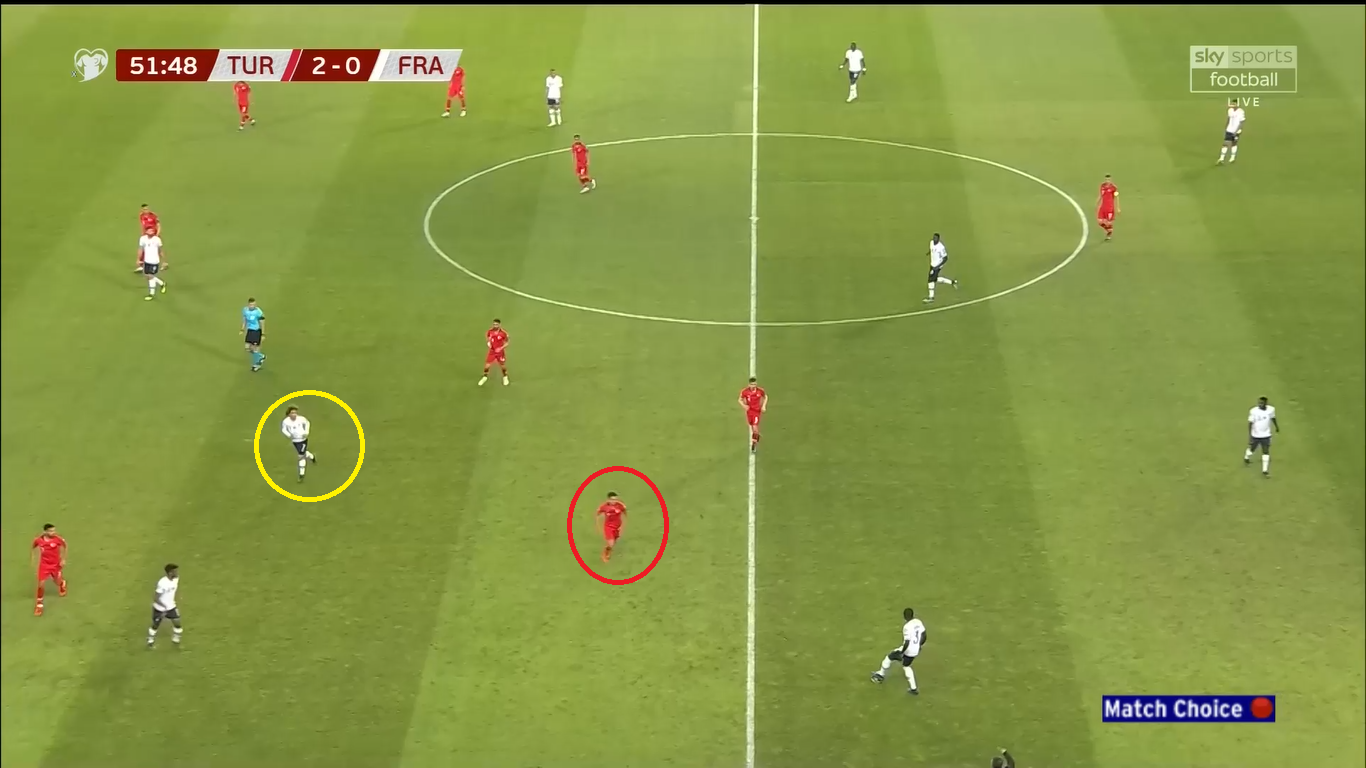 When the ball is on the wing, he slowly runs towards his opponent, but always keeps Griezmann in his cover shadow so that the pass cannot be played to him. In the end, France turn the ball over.

Concerning high pressing positions, there were not many in Güneş’ recent era. He rather focusses on staying compact and trying to control the space. While Turkey scored a few goals after pressing, these were mainly due to individual contribution in high energy duels rather than organized pressing. 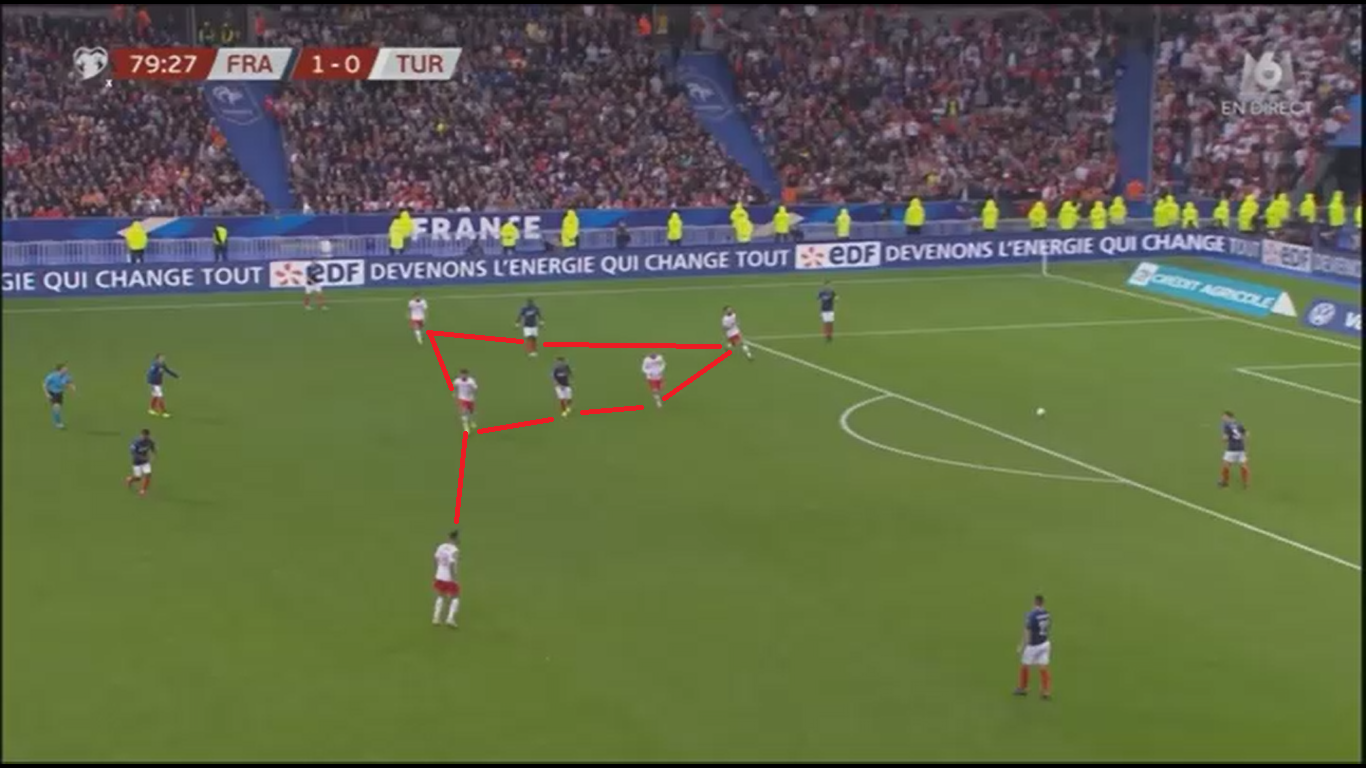 The image above underlines that Güneş has a different approach right now. We see that Turkey have a lot of players in the left half of the pitch. This is where the ball was originally. While Turkey were able to create some pressure in that area of the pitch, they did not fully commit to the pressing. They left the passing option to the other centre-back open, which enabled France to calm down the game. So even if Turkey are pressing occasionally, it is a rather conservative approach at this point.

Turkey really improved a lot under Şenol Güneş. The 67-year-old was able to implement a certain structure both offensively and defensively, which is clearly visible watching the games, as certain aspects are repeatedly used. However, Güneş does not operate with strict boundaries, but rather gives his players lots of freedom to express their creativity. Looking at the sheer results, he certainly seems to have found the right balance between structural rules and giving players freedom. The main point is that freedom is granted within certain boundaries, which clearly seems to suit this team. Especially defensively, Turkey are doing great, as both the figures and the eye test back this finding up. Surely, there are still a lot of things to improve for Güneş, but bearing in mind that he took over only half a year ago, we may expect good things to come. Given the right circumstances, Turkey might even be up for a surprise in next year’s UEFA Euro 2020.