Last week we asked our loyal magazine subscribers which player impressed them the most in European competitions. Despite having formidable competition in the likes of Romelu Lukaku, Keylor Navas, Lionel Messi, Bruno Fernandes, Daichi Kamada, Raúl Jiménez and Vincent Aboubakar, it was Robert Lewandowski who won the votes. His four goals against FK Crvena zvezda helped Bayern Munich secure first place in Group B.

This tactical analysis, while similar to a scout report, will provide you with an overview of what made him so effective in this game in particular. This analysis will briefly look at the statistics behind his game, but will be more focused on the individual moments that made him so dangerous.

Offensively, Lewandowski had a dominant game. He managed eight shots, six of which were on target. This season he has only averaged 5.75 shots every 90 minutes. This increased number of shots was likely due to his number of touches inside the box. This season he averages 8.92 touches inside the opposition’s box every 90 minutes, while in this match he recorded 13. What makes these statistics even more impressive is that his season averages are based on performances over a full 90 minutes. In this match, he only played 78 minutes. But the statistics only tell half of the story. In the rest of this analysis, we will look at the characteristics of his game that helped contribute to such a dominating performance.

Creating space for himself

Lewandowski is well known for his clinical finishing, however, such a skill would be useless if he was unable to position himself in goal scoring positions. This performance was a perfect showcase of his ability to create space for himself. It was evident when watching replays of his individual contributions that the Polish striker was always aware of his opponents’ positions. This allowed him to manipulate the defenders around him, and move them out of the spaces that he wanted to occupy.

We can see an example of this movement in the 27th minute of the match. Despite being the only attacker in his opponents’ half, with four defenders behind him, Lewandowski found himself running at goal with the ball at his feet. The breakaway started after Corentin Tolisso played a brilliant ball into the path of the striker. However, the pass was only possible because of the movements made by Lewandowski just moments prior. We can see Lewandowski moving into the free space to drag his marker, Nemanja Milunović, out of position below. 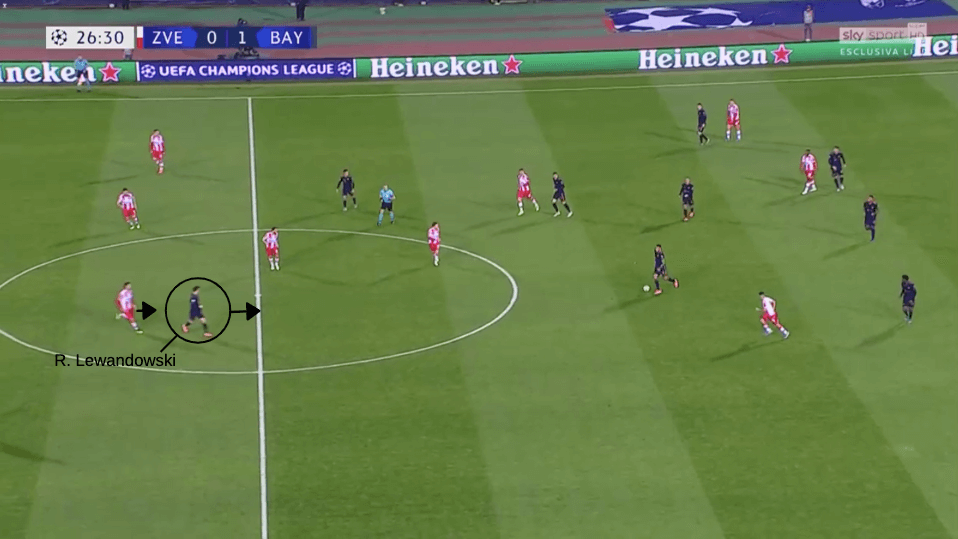 We can now see him quickly spinning away from Milunović and exploding into the space he just created. Lewandowski did something identical in the seventh minute as well, leading to another excellent goal-scoring opportunity that he should have scored. 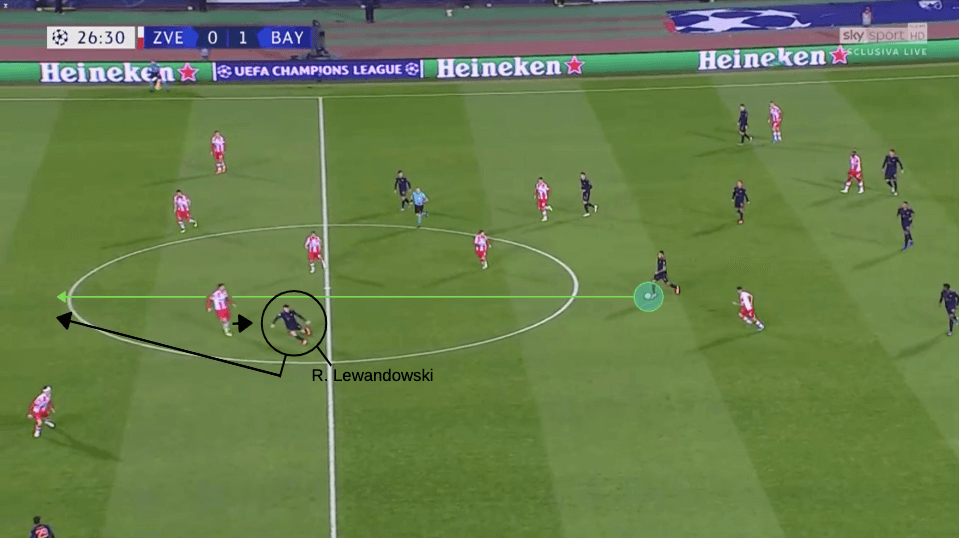 We can also see him, in the 32nd minute, make a run towards the back post before quickly changing direction and exploding into the space in front of his marker. The slight movement toward the back post pulls the defender away from his central location, creating space for Lewandowski to move into. 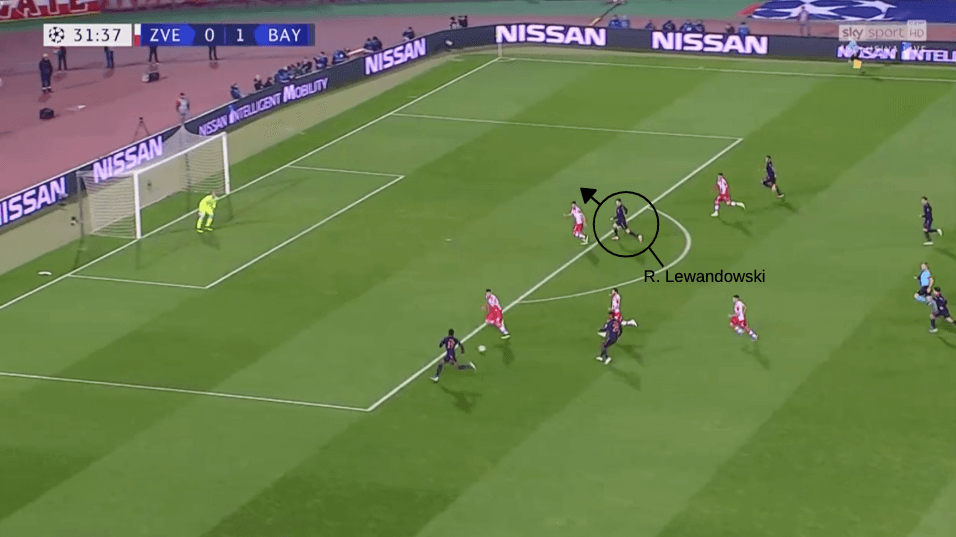 Lewandowski makes a smart run into the space, and is able to get on the end of the pass. But the pass is made slightly behind him, forcing him to attempt a back heel, which is blocked. It was a great goal scoring opportunity though, which was only possible because of Lewandowski’s initial movement off the ball. 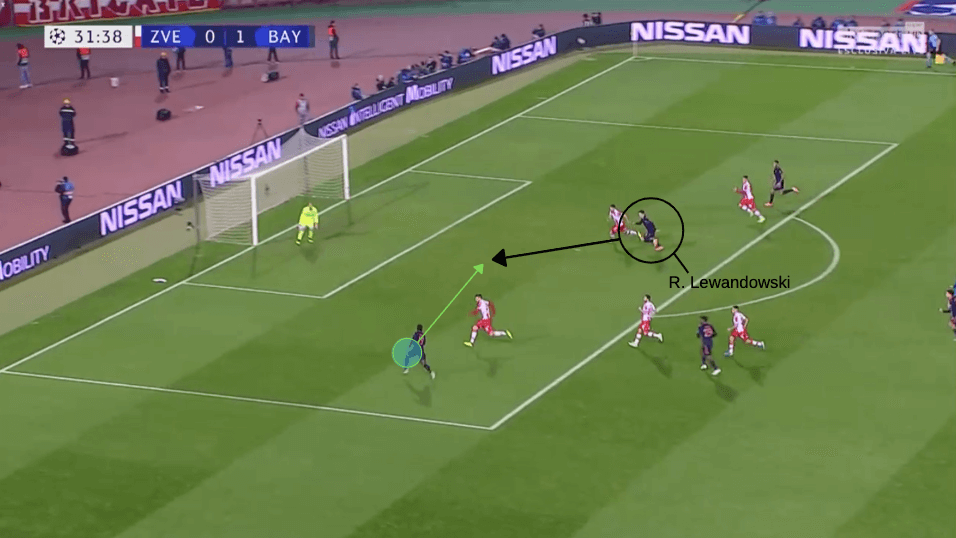 As well as utilising smart off the ball movements to create space for himself, Lewandowski was effective at attacking empty spaces to get on the end of passes. This was achieved by positioning himself between two defenders, and then quickly exiting the space at opportune moments. The allowed him to confuse the opposition, causing the defenders to second guess who was marking him.

In the 52nd minute we can see Lewandowski standing between both of FK Crvena zvezda’s centre-backs. In the image below, Lewandowski is communicating with his teammate, Tolisso, by pointing at the area behind Milunović where he wants the ball to be played. Because the Polish striker is positioned between two the defenders, it makes it more difficult to mark his run. Kingsley Coman’s narrow position forces left-centre-back Miloš Degenek to stay centrally, while Milunović is focused on the ball carrier. 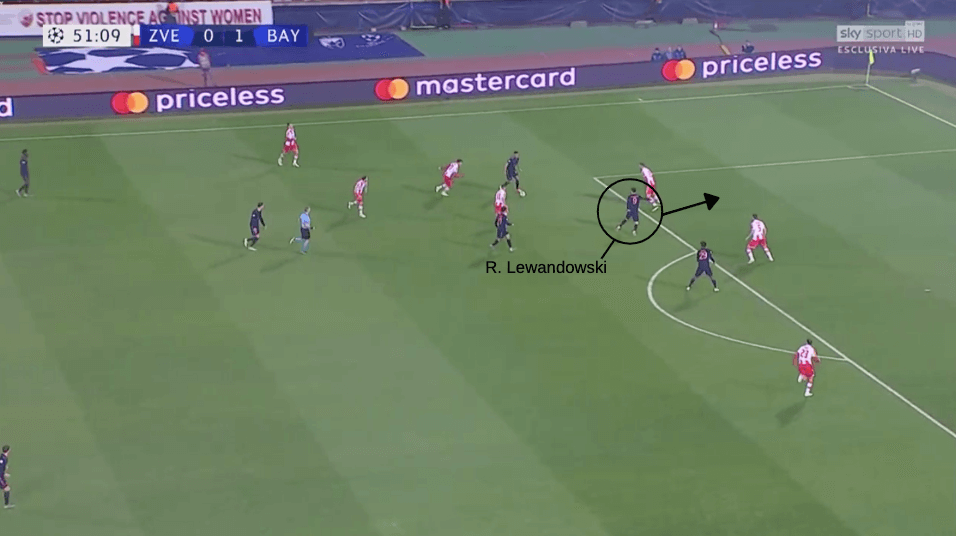 As soon as Milunović steps toward Tolisso to close him down, Lewandowski makes a run into the space behind him. Tolisso then plays the ball into Lewandoski’s path, forcing Degenek to reactively track the striker. He is caught out from the movement and ends up giving away a penalty, which Lewandowski scores to clinch his first goal of the game. 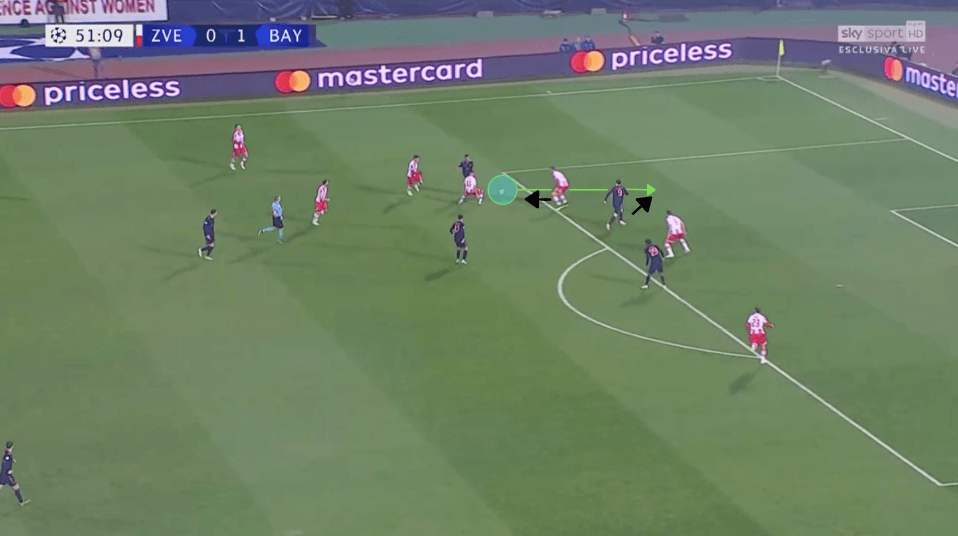 We can see Lewandowski manipulate the space between his opponents right before he scores his third goal as well. As the ball is switched to Coman in out on the right, Lewandowski can be seen making a late run into the box. He already sees that the spaces between both the right-back and right-centre-back and the space between the two centre-backs are both already occupied by teammates. 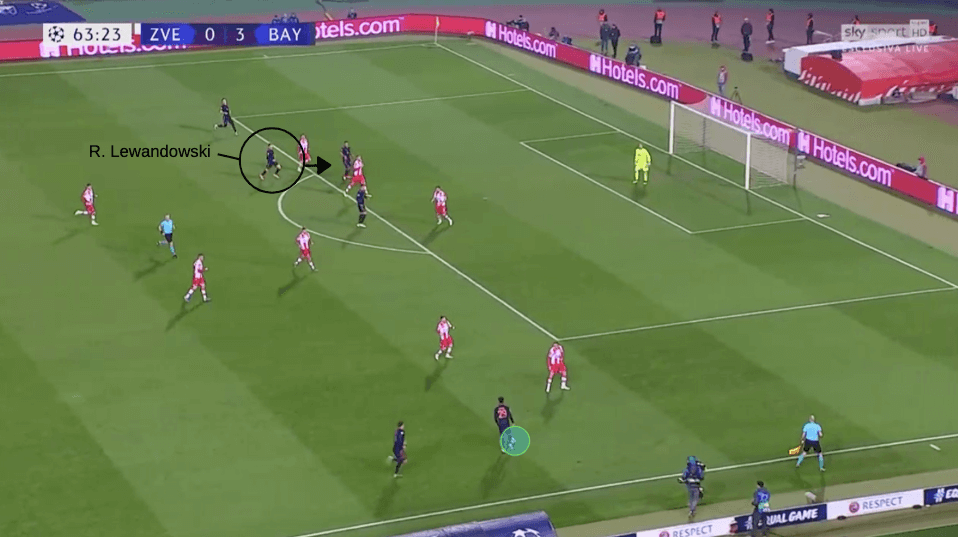 He targets the right-centre back, making a move into the space behind him. He then moves into the space in front of Milunović. At this point the left-centre-back, Degenek, is still completely unaware of Lewandowski’s presence in the box. 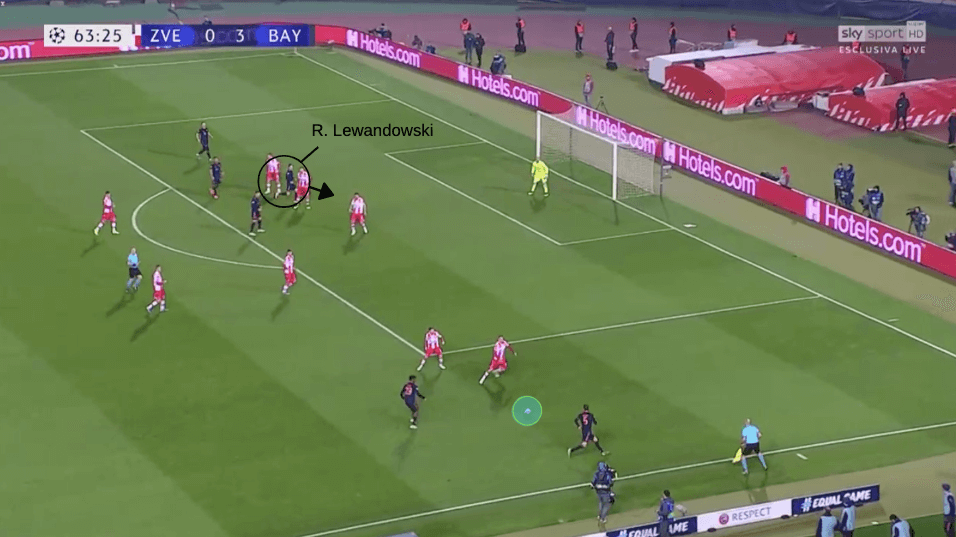 This allows Lewandowski to quickly find separation from his marker by exploding forward in front of Degenek. Because he occupied the space between other defenders before making his run, Degenek was completely unaware of the striker’s presence. Once again, smart positioning and quick movements were key to Lewandowski scoring this goal. 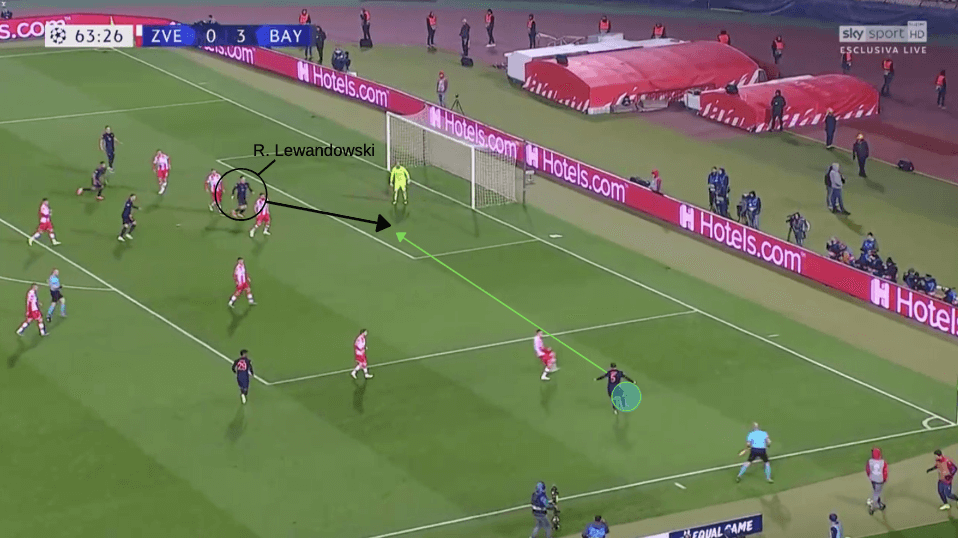 The striker is then able to get on the end of the cross and score his hattrick with a sublime header. He was left unmarked in the six yard box, all because of his movements.

Lewandowski’s ability to anticipate the play and occupy the right spaces is what makes him such a deadly goal scorer. These tactics were key to him scoring his second goal of the game as well. This was just one isolated performance out of many in an incredible career. FK Crvena zvezda’s defenders will look back on this game with regret once they realize how easily Lewandowski manipulated them. More experienced defenders may have been able to handle the 31-year-old, but he has proven time after time that he can score against any team he faces.