Not everyone expected Benjamin Pavard to play such a central role during the first months at his new club Bayern Munich. The young Frenchman joined the German champions from VfB Stuttgart in this summer for a reported fee of £31 million. In the first 11 Bundesliga games, this season Pavard was in every single minute on the pitch. It’s the same for all four games of the group stage of the Champions League and the two DFB Cup fixtures against Cottbus and Bochum.

In this tactical analysis, we will look at the Frenchman’s role in the system and tactics of Bayern Munich and then examine what his greatest strengths and weaknesses are on the pitch.

The 23-years-old World Cup winner played in this Bundesliga season in every single game as already mentioned. However, he didn’t always play in the same position. The Frenchman played as every part of the back four at least once. He played one game as a left-back, three as a centre-back and seven as the right-back. These are the numbers how he started the games, but it often changed throughout the match. For example, in the game against Eintracht Frankfurt, he started as a right-back and due to Jérôme Boateng’s red card in the 10th minute he had to occupy the German’s position, as the centre-back.

In the first two games under new coach Hans-Dieter Flick, he played as a right-back since the new man at the sideline chose Javi Martínez as his second centre-back beside David Alaba (Niklas Süle and Lucas Hernández are injured). The former coach Niko Kovač used Martínez just in four out 11 competitive games in which he was not injured as a centre-back. Considering these aspects, we can expect Flick to line up his team mostly with Martínez as one of his centre-backs and Pavard as the right-back and due to that, we’ll focus in this tactical analysis more on Pavard’s role as a full-back.

In his heatmap for the first eleven games of this Bundesliga season, we see that he played during the majority of the time as a right-back. Besides, his heatmap isn’t typical for a modern full-back since he acts more defensively. Even though Pavard is also dangerous for the opposition in higher areas of the pitch as we will see later in this analysis, he started out his professional career as a centre-back and played in that position for many years where he developed his defensive mindset. Even though the Frenchman is this season at Bayern more offensive than compared to his games during the FIFA World Cup 2018, he’s still more defensive than the average full-backs nowadays.

When he plays as a right-back he mostly is positioned deep during the build-up. In some games, for example in the match against Mainz 05 on the third matchday, the Frenchman positioned on the same height as the two centre-backs to create a back three while the left-back who was, in this case, David Alaba pushed forward.

Anyways, his deeper positioning has mostly another reason too. In most of the games when Pavard was the right-back, the right-winger was Serge Gnabry. The German likes to stay near the touchline to provide width and generate some distance between him and his nearest defender. Considering this, if Pavard positions higher up the pitch, they would occupy the same space in the wide area.

However, when the Bavarians are able to progress the ball further up the pitch, Pavard tries to support his teammates by positioning himself higher. In these situations, he still seems to be a bit careful and he doesn’t position in the highest line, but he looks for free spaces where he can easily receive the ball. This can be seen in the image below as he stays deeper to create distance between him and the opposing full-back. In light of this, he’s a simple passing option for Kingsley Coman.

The Frenchman isn’t a defender whose greatest strengths are standing or sliding tackles. Additionally, he’s not as fast as an average full-back is nowadays, but he’s still among the best defenders of the German Bundesliga at the age of 23. So how come?

His two greatest strengths when we talk about his defending are clearly his positioning and his anticipation. His positioning when the opposition is in possession of the ball is most of the time perfect and besides that, you permanently can see him communicating with his nearest centre-back, the winger before him and the central midfielders to have the ideal positioning. Not just he alone, but the structure and formation of the whole squad.

This combined with his understanding of the game and his anticipation makes it logical that one of his greatest defensive abilities is clearly the intercepting of passes. This also gets visible in his stats since he makes on average 4.69 interceptions per game while he has just 3.12 successful defensive duels per 90 minutes. For the interceptions, he has the third-best value of all Bayern players what speaks for him.

In the image below we can see a typical interception as Dortmund’s left-back Nico Schulz receives a pass from Axel Witsel. Thorgan Hazard starts a deep run to get a through pass behind the last line of the defence of Bayern. The French right-back anticipates this movement and makes a step aside as Schulz tries to pass the ball down the touchline past Pavard. The Frenchman easily intercepts the pass to recover possession for the Bavarians. 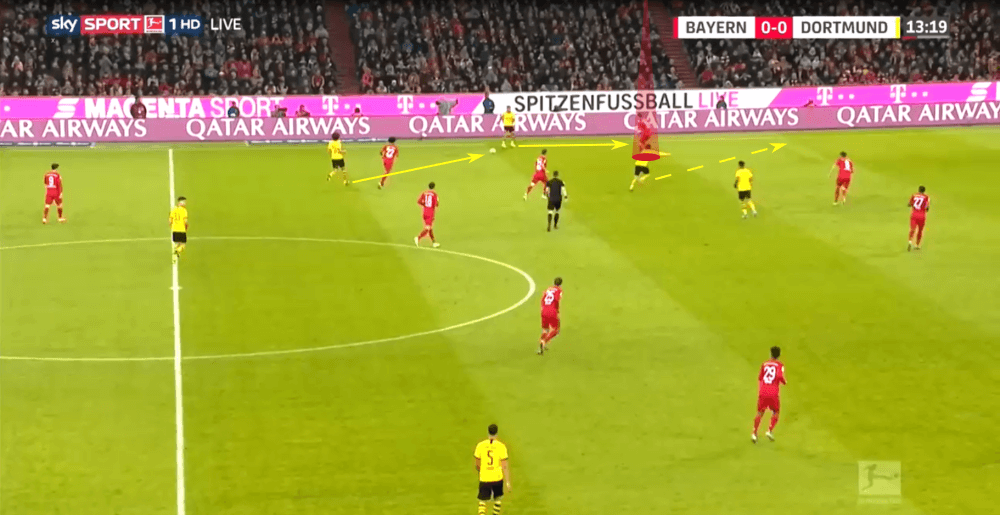 However, the 23-years-old isn’t bad when it comes to defensive one-on-one situations, but just not as good as in intercepting passes. Maybe this will change in the upcoming years since his technique of how he acts during defensive duels is already quite good. He always uses sidesteps to try to force the opponents to slow down their pace and additionally in this body position he can quickly react to the movement of the player against which he is in the duel. However, his timing doesn’t seem to be always that perfect, but he’ll surely work on that to become an even better player in the future.

However, the French defender also uses his understanding of the game when his team is in possession. Logically, he doesn’t play as many passes as Thiago Alcântara and is not as central for the build-up as Joshua Kimmich, but you still have to admit that quite a lot of attacks get started on Pavard’s right side.

He plays on average 65.7 short and 4.51 long passes per match in this Bundesliga season. His long passes are mostly either long balls to Robert Lewandowski when he has no other option or when he switches the side to find the opposing winger or full-back. Anyways, the numbers show that he mainly plays short passes.

The interesting aspect about the way Pavard is acting during the build-up is how he always instantly moves into a new and free space as soon as he passed the ball. Of course, this is something that you expect from players since otherwise, a good ball circulation isn’t possible, but you don’t often see a player like the Frenchman who almost always does this movement. In the two images below, we can see two examples for his runs as soon as he passed the ball.

However, there is also something different which gets visible when you watch the young Frenchman during a game. As a full-back, he hasn’t got that much passing options since he’s positioned next to the sideline. Due to that, it’s easy for the opposition to press in at him and cut off all passing options. When the opponents do so, Pavard often plays a lobbed pass down the touchline to the winger. These balls are hard to intercept for the opponent as we can see in the example below.

Dangerous in the final third

Anyways, the Frenchman is also important for his team when it is about creating goalscoring chances and scoring goals. In the opening 11 Bundesliga games this season he scored two goals and also assisted twice. These aren’t bad stats for a defender. As you would expect, both assists were crosses from the right side at which we can look in the following two images. In the first one, the situation seems to be cleared by Dortmund, but Pavard delivers with the first touch a perfect cross to find Lewandowski in the centre. In the second example, he received a pass from Coman and took the ball with the first touch to find Ivan Perišić at the second post with a great cross. 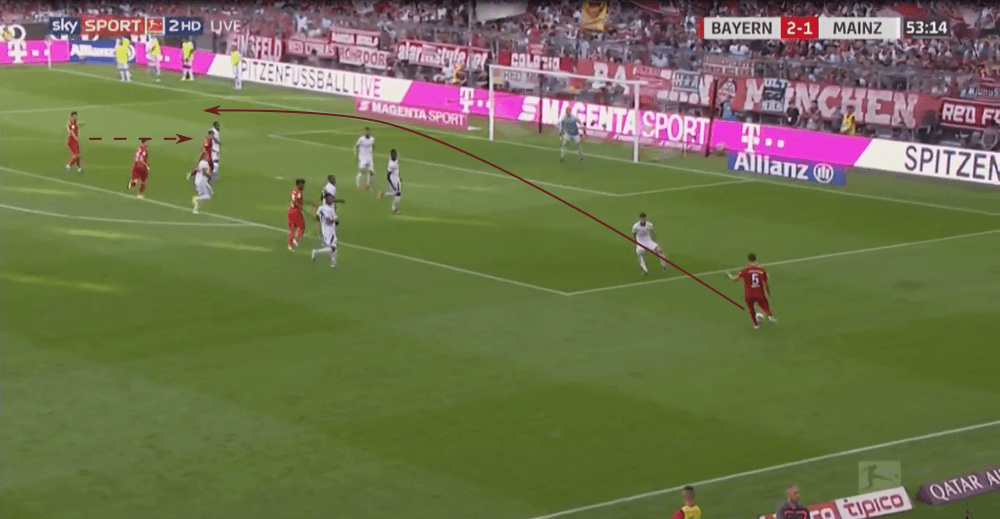 His two other goals both were volleys and, in both situations, he showed his great technique. You have to add that Pavard scored his most famous goal in his career (until now) during the FIFA World Cup 2018 also by taking the ball in mid-air and blasting it in the far hand corner. He scored that goal in the round of the last 16 against Argentina and it was voted as the goal of the tournament. The two goals which he scored this Bundesliga season so far were also both volleys and you can see them in the images below. 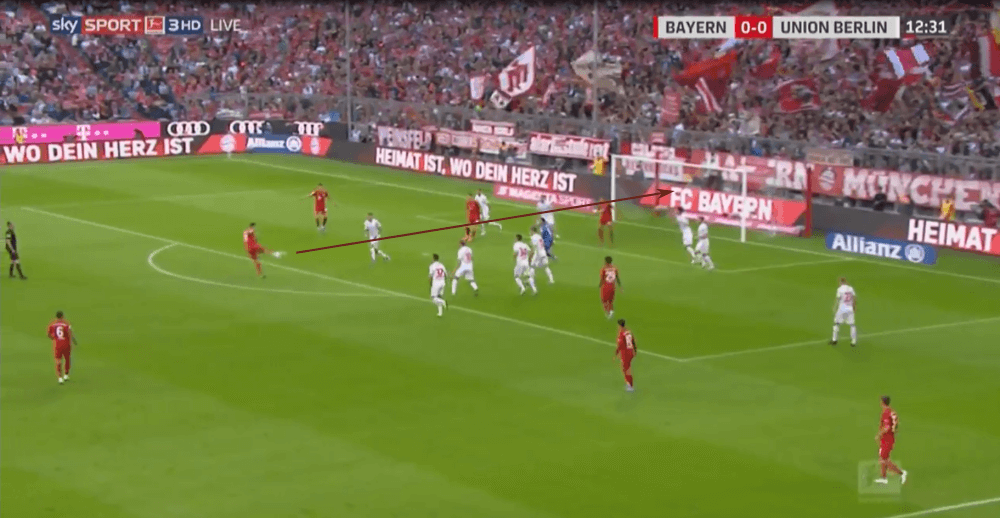 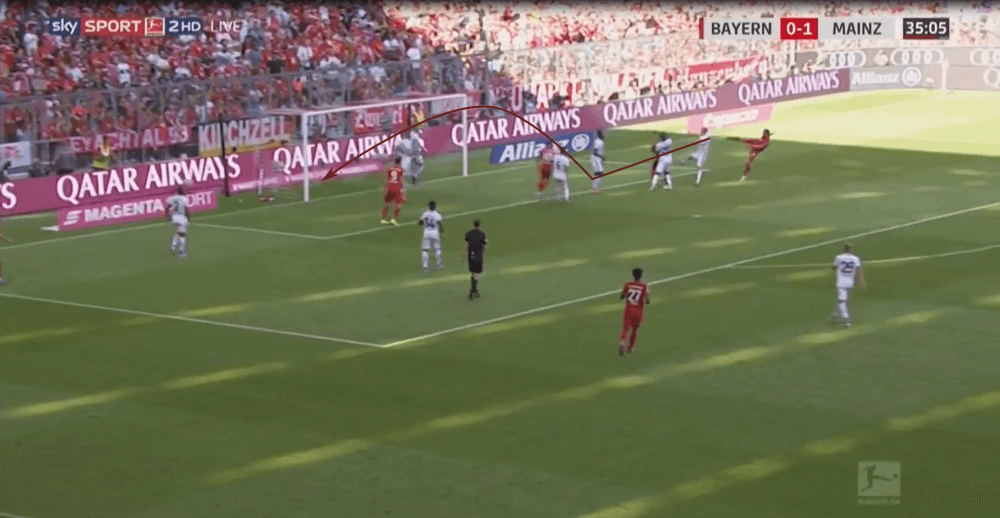 As this scout report showed, Pavard has his strengths in the offence as well as in the defence. He can support his teammates in the final third and also gets dangerous in front of goal. However, his variability to play in every part of the back four can also be a huge benefit for his squad.

He needs to work on his ability to win defensive duels since this quality would make him an even better defender. He played during the FIFA World Cup 2018 in every game for France except the last match of the group stage in which Didier Deschamps rotated since they were already through to the next round. If he doesn’t get injured, then he will surely be the first-choice right-back of the French national coach during the UEFA Euro 2020.