At Bury during the 2018/19 season, word began to spread about Ryan Lowe, the manager at the time of the now-dissolved club.

Lowe had managed to get Bury promoted, boasting a very attack-minded style of football which has been said to be influenced by some of the world’s greatest coaches including Jurgen Klopp, Rafael Benitez, and Pep Guardiola.

Bury were League Two’s highest-scoring team, finishing second and earning promotion before Lowe was poached by Plymouth Argyle. In his debut campaign with the Pilgrims, Lowe guided the team to third place, earning automatic promotion to League One.

In the 2020/21 season, Plymouth were finding their feet in a higher-quality league and so ended the year in a respectable 18th place in the third-tier table. Nonetheless, in the current campaign, Lowe’s men have hit the ground running and are now sitting pretty at the top after twelve matches.

What’s more impressive is that Plymouth Argyle are on the second-longest unbeaten run in English league football at the moment, spanning 11 matches as of writing, with only Liverpool besting this record. It is still early days, but the fans will certainly be happy with the team’s current form.

However, what is even more impressive is Plymouth’s style of play under Lowe. This article will be a tactical analysis of the Pilgrims under their Merseyside-born head coach in the form of a team scout report.

It will be an analysis of the team with a heavy focus on Plymouth’s tactics and principles of play in possession.

Plymouth Argyle have mainly utilised a 3-5-2 formation in all competitions this season. Of course, in the defensive phases, this collapses into a 5-3-2 with the wingbacks dropping alongside the three centre-backs.

The 3-5-2/5-3-2 has been used in 92 percent of the Pilgrims’ matches this season although Lowe has also deployed a 3-1-4-2 in certain games too such as the 2-2 draw with Lincoln City at the Sincil Bank Stadium. 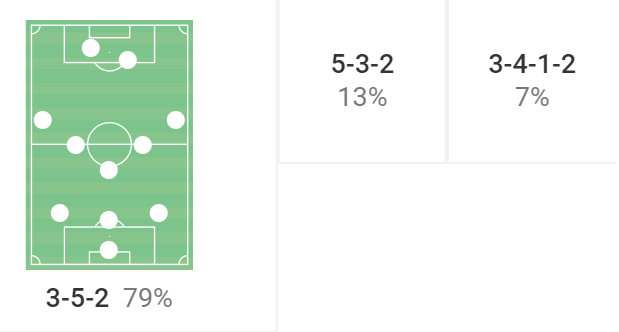 Plymouth underwent severe surgery to their squad during the summer transfer window as lower-league clubs tend to do. Quite a lot of their first-team players this summer were brought in on free transfers.

Plymouth’s entire backline was newly-recruited in the recently-shut summer market. Brandon Galloway, Macaulay Gillesphey, James Wilson, and Dan Scarr were all brought to Home Park on free transfers whilst Jordan Houghton, Plymouth’s new number ‘6’ in midfield was also bought for free, according to Transfermarkt.

Midfielder Ryan Broom moved to Plymouth on a loan deal from Peterborough United as well as Jordon Garrick from Swansea City whilst Kieran Agard was brought in as a free agent following his release from MK Dons after five years with the Buckinghamshire club.

Lowe has predominantly used the same starting lineup too this season. 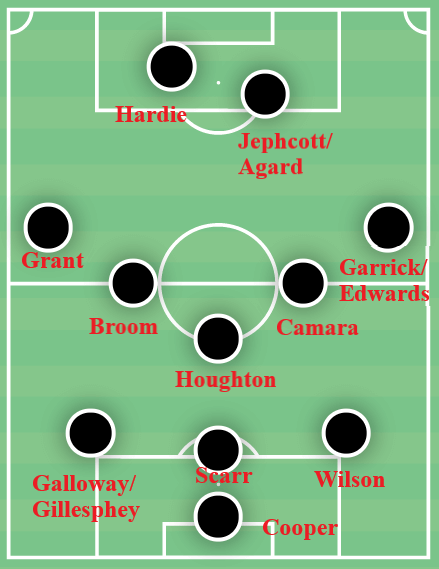 Building through the thirds with a back three

When Plymouth have the ball in deeper areas of the pitch, the centre-backs split very wide in order to cover the field’s width.

This allows the Pilgrims to stretch the opposition’s press as they will have more ground to cover when pressing but it also allows the wide central defenders to link up with the wingbacks and create clean and easy progression. 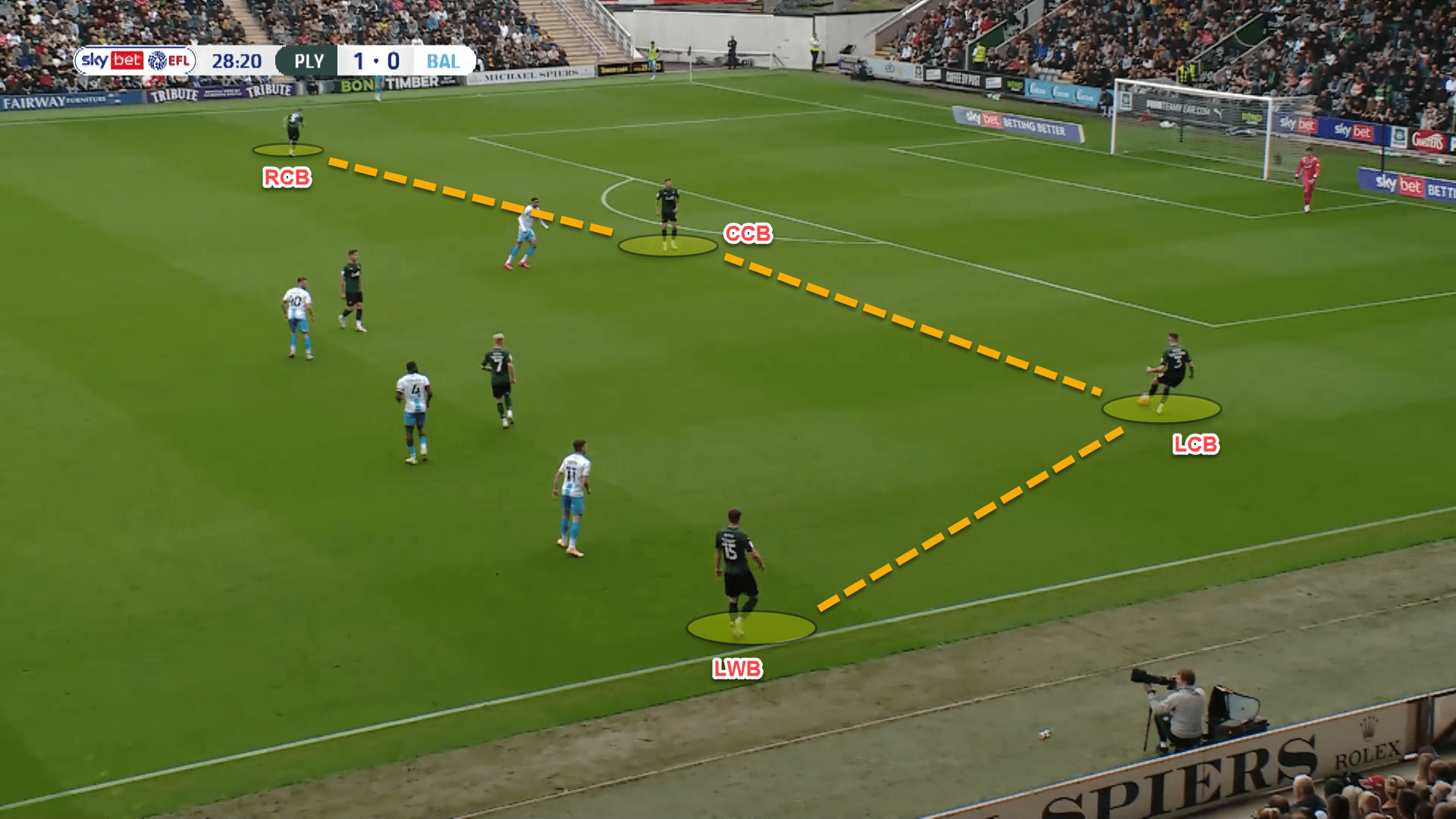 Generally, in this phase, Plymouth use just one single pivot in front of the backline that sits behind the opposition’s first line of pressure.

This allows Lowe’s men to essentially have a player they can use as a ‘wall pass’ to play inside to. The ‘6’ can then circulate the ball around to the other side or else pass it back to the player who originally played it to him. This constantly moves the opposition while the Pilgrims look to eventually break through the press.

As already stated in the previous section, this player has been Houghton so far this season that has been trusted in the single-pivot role. 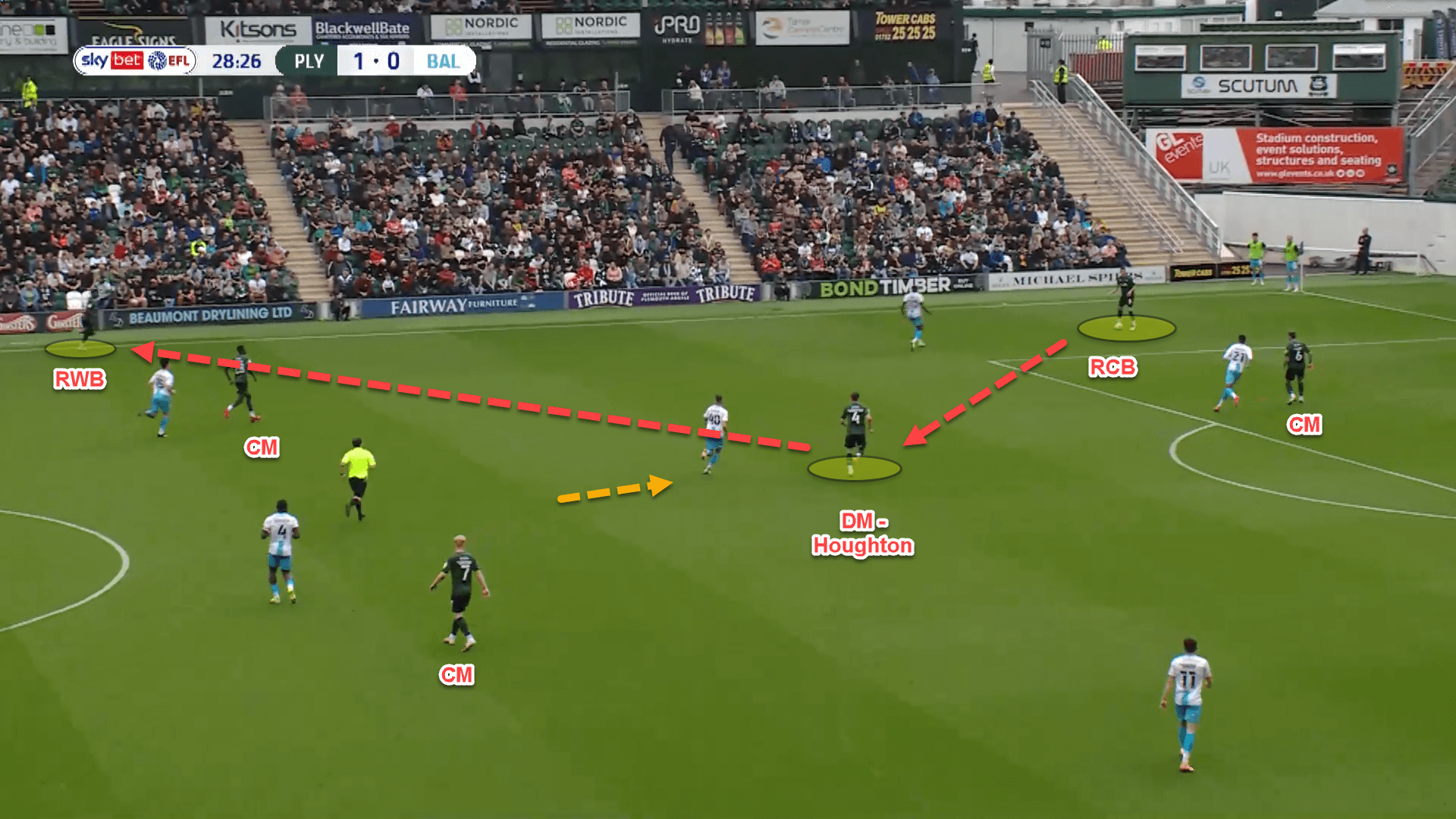 Here, the right centre-back has played into the feet of Houghton which has triggered Burton Albion’s number ‘10’ to put pressure on him. Instead of taking a touch or trying to turn on the ball, Houghton simply plays it out wide first-time to the right wingback which allows Plymouth to advance higher up the pitch.

However, Houghton does not always simply look to move the opposition by playing intelligent first-time passes to the centre-backs and wingbacks.

At times, he has shown himself to be very capable of progressing the ball centrally by holding off a player that is putting pressure on him from behind and then eventually either turn him on the ball or else slip a more advanced player in behind. 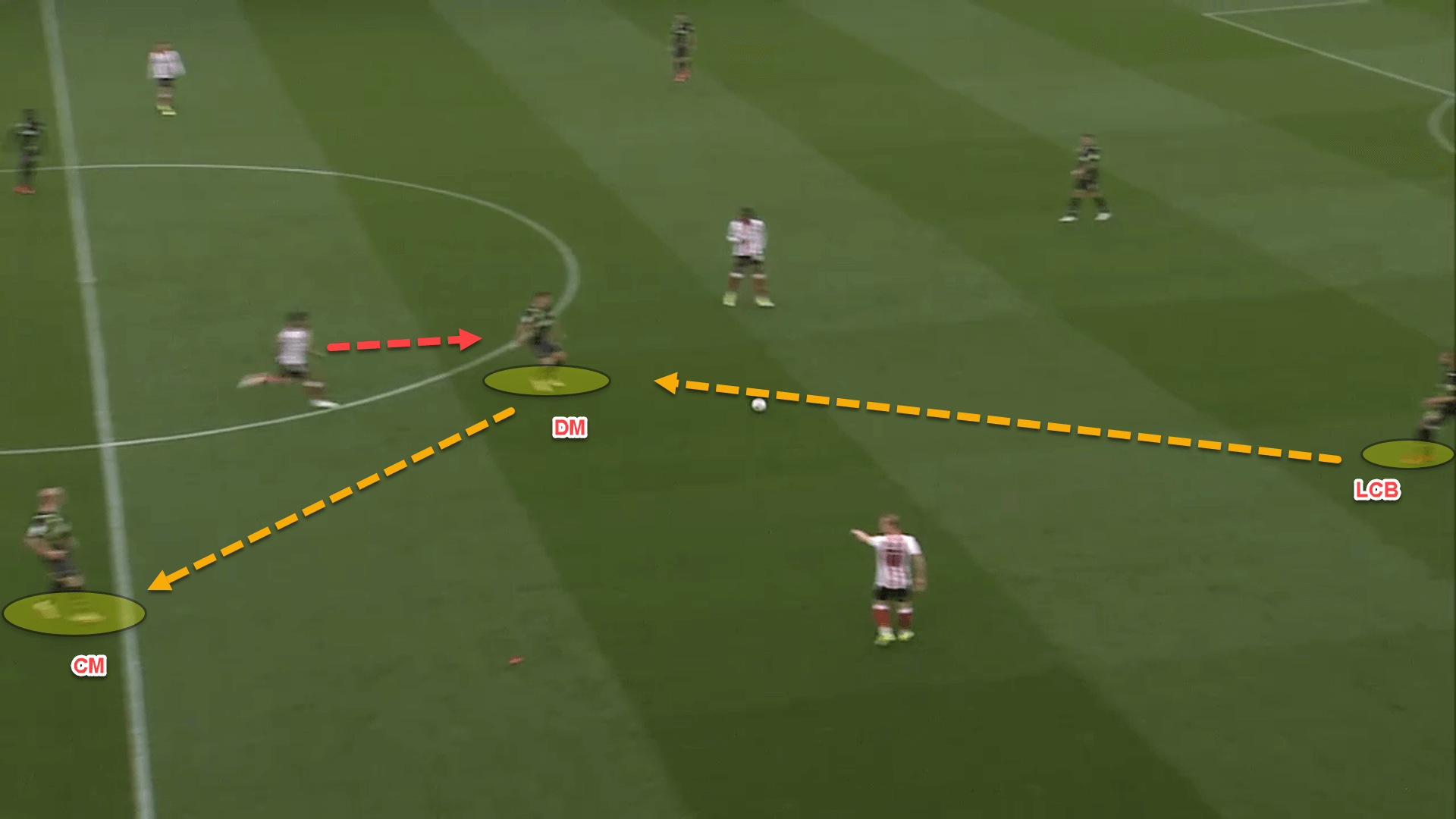 Sometimes ball progression up the pitch from deeper areas will be more difficult if the opponent’s high block is very dogged and so if this happens, either Broom or Panutche Camará will drop alongside Houghton to give the centre-backs an extra option.

While there would be one less player higher up the pitch, it can make for easy ball progression due to the increased personnel in deeper areas. 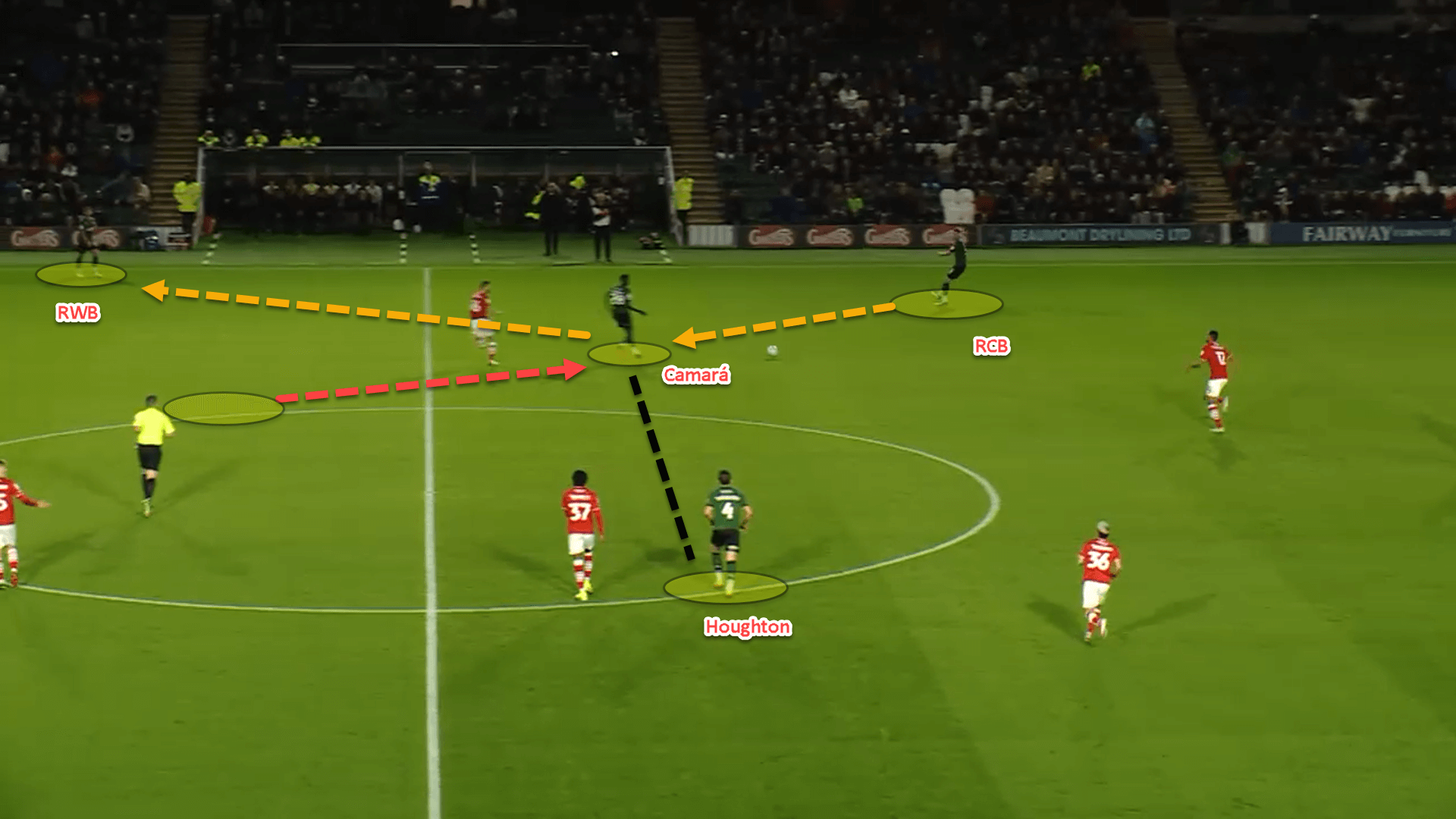 Plymouth’s average positions map proves how their midfield tends to operate. There is one defensive midfielder sitting very deep as the double-pivot, one midfielder pushed really high, operating in the halfspaces while one tends to sit slightly deeper, dropping deep but can also push high too depending on the situation.

Here are the average positions of Plymouth’s players from a recent 2-2 draw with Lincoln City. 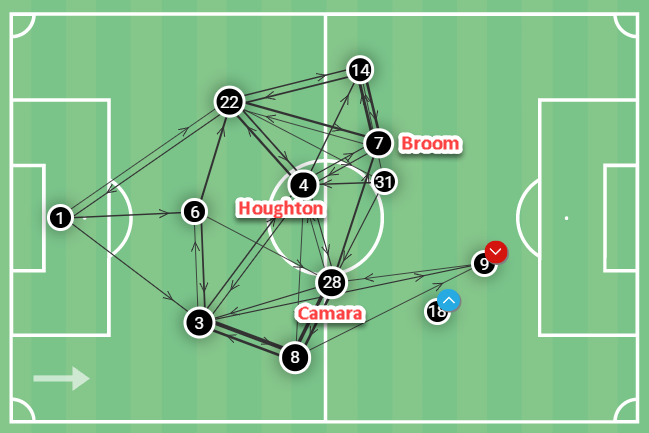 As can be seen from the data visualisation, the midfield operates as a stereotypical ‘6’,’8’,’10’ midfield with the three players all operating in different horizontal and vertical lines most of the time. This aids with some very nice and clean ball progression from deeper areas of the pitch.

Plymouth are very astute at doing this and Ryan Lowe’s side have averaged 70.25 progressive passes per 90 which is one of the highest in League One. 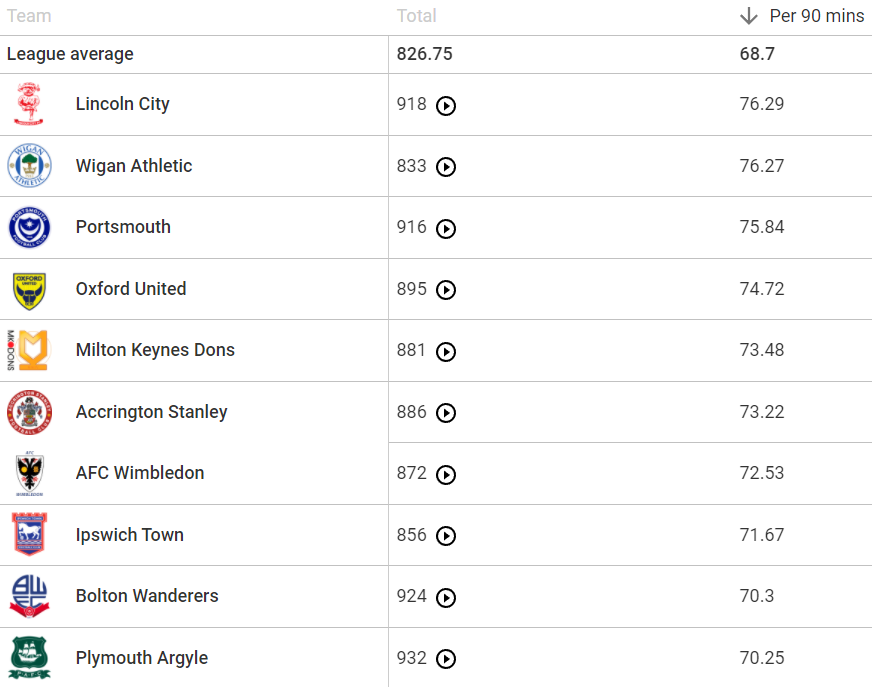 Use of wingbacks and long balls to reach the final third

While the team play some really exciting and expansive football, what makes Plymouth Argyle’s system in possession very interesting is just how direct they can play.

Plymouth are currently averaging just 3.47 passes per possession. Putting this into perspective, League One’s average is 3.89 so Lowe’s are quite a bit below the mean which implies that Plymouth tend to try and play up the pitch as quickly as possible in possession of the ball.

The two main ways that the Pilgrims look to reach the final third is by using the wingbacks to create combination play on the flanks but also by playing direct through balls into the channels or by playing long to the centre-forwards and trying to win the second balls.

If the defending team’s press is proving difficult to bypass, Plymouth will try and play direct into the channels. In this respect, the two centre-forwards operate as split-strikers at times, similar to how Manchester United played during Ole Gunnar Solskjaer’s spell as caretaker manager which proved very successful.

The definition of running into the channels in this respect refers to when a striker attacks the depth of the pitch between the opponent’s fullback/wingback and nearest central defender. 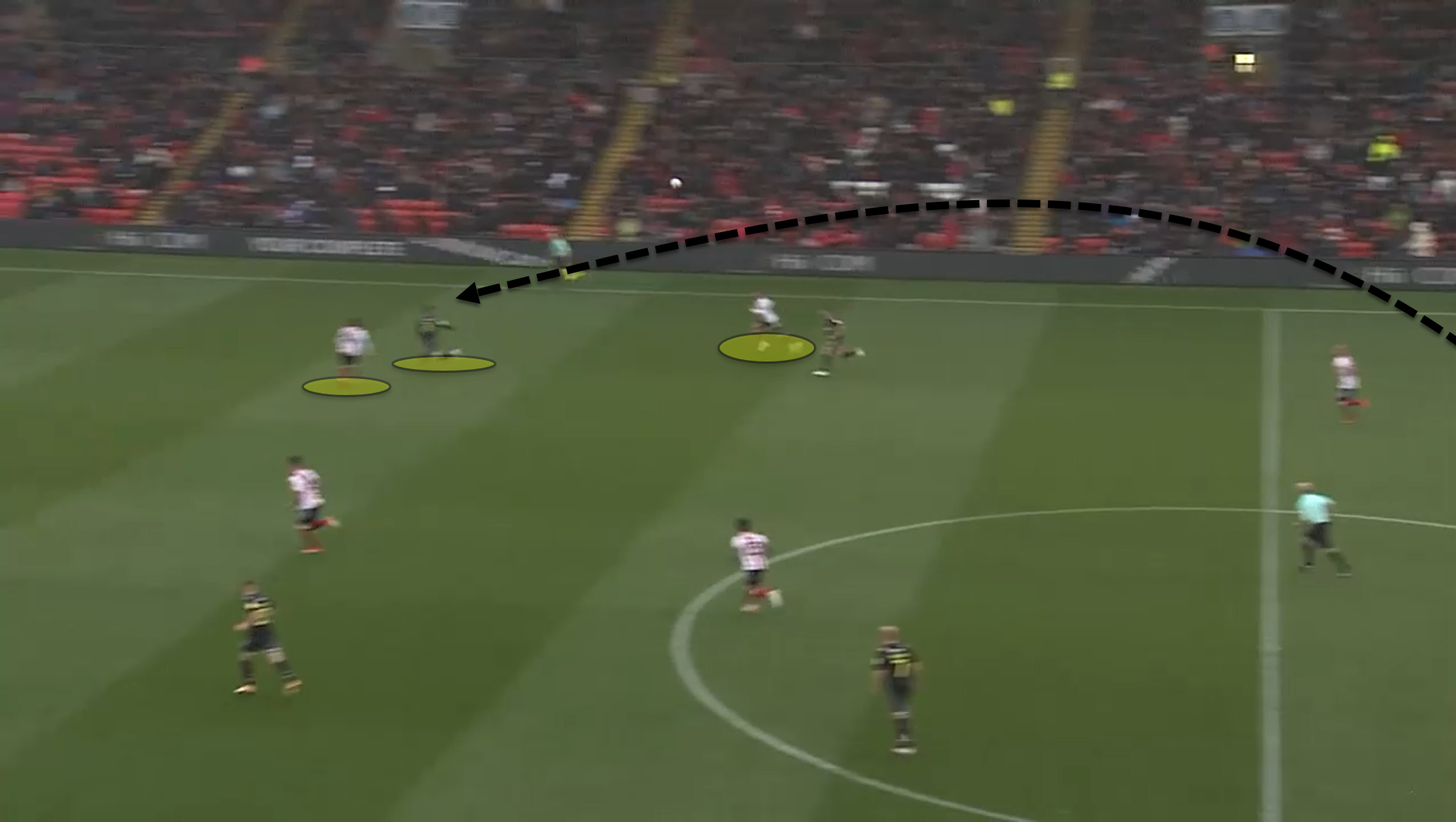 This is a really efficient way of reaching the final third when it is done with precision as opposed to merely hopeful punts up the field as quite a lot of teams at this level tend to do.

It must be done when the opponent is pressing high though in order to reach maximum efficiency. When the defending team are pressing in a high block, their fullbacks tend to push with the two central defenders near the halfway line.

In the image above, Lincoln are pressing high with their midfield, forward line, and fullbacks. 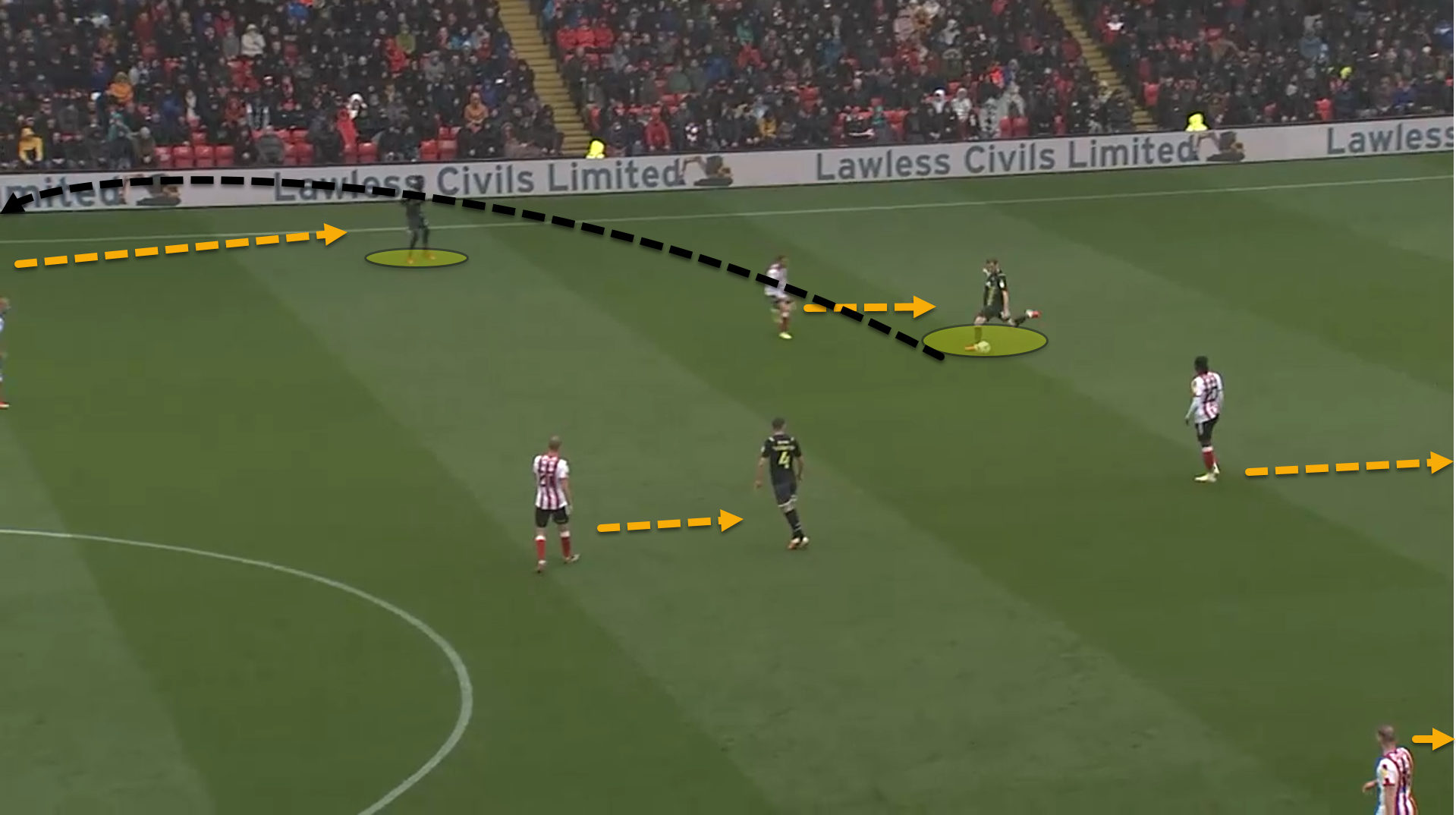 The Imps’ backline has pushed right up in coordination with the midfield and forward line which has left space for Plymouth’s centre-forwards to attack into.

Lowe’s centre-backs all have very solid passing ranges and so going long is a really good option for them in times of trouble as they can reach the final third quickly and look to create goalscoring opportunities.

These long balls are not always in behind the opposition’s backline into space for the forwards to run onto. At times, they can also be direct to the centre-forwards’ heads to challenge in the air.

From there, players will push and create a nice support system under the ball to try and win the second ball.

Unfortunately, Plymouth are not overly proficient in their aerial duels, contesting a total of 43.93 aerial duels per 90, winning just 43.3 percent.

Regardless, when going long, winning the first contact duel is not so important as the second. Lowe’s men are very good at winning the second balls and always have at least two players under the ball to win the knockdown and one running behind to attack the flick-on. 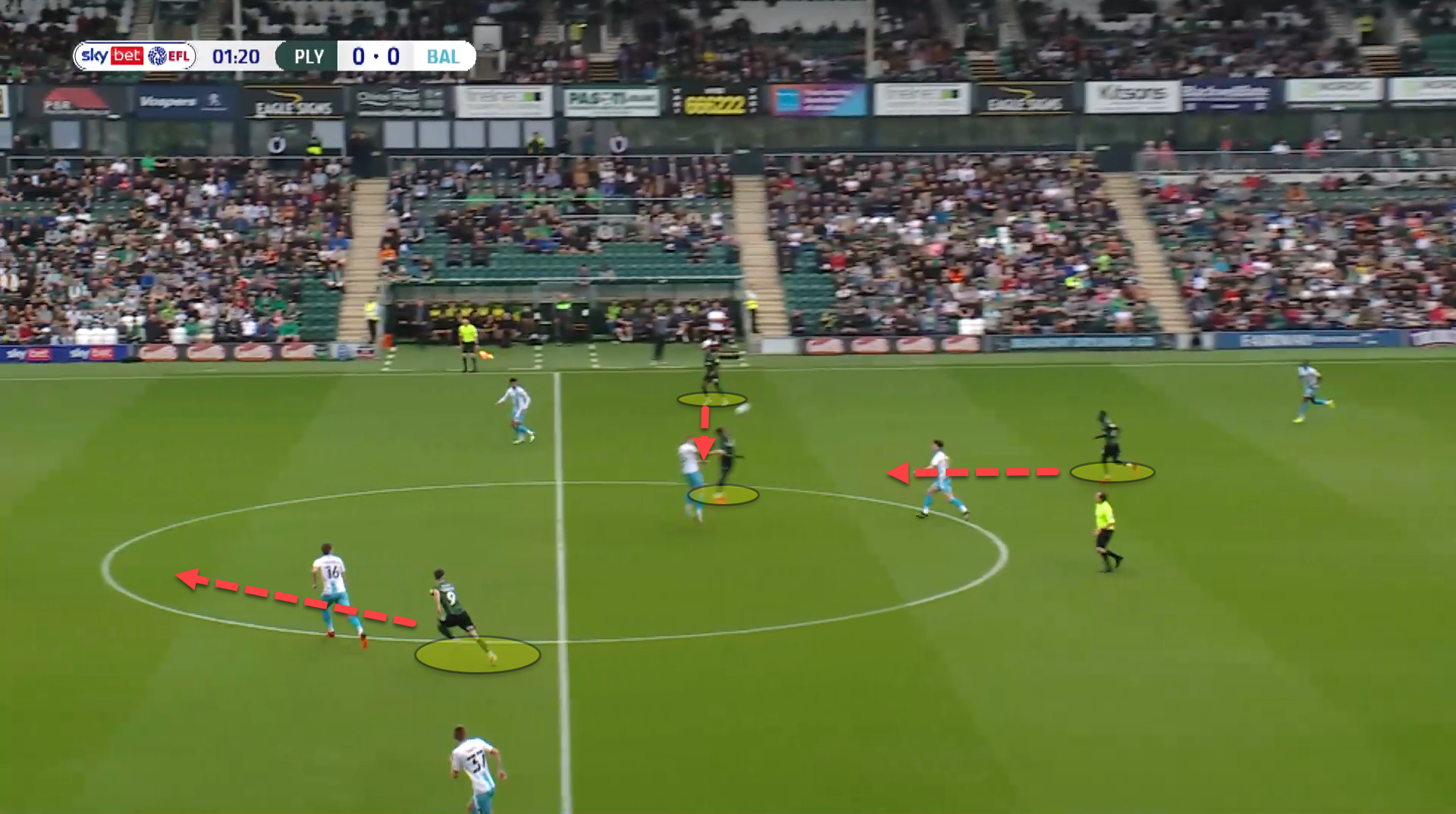 From here, providing that the second ball is won, Plymouth can begin attacking an exposed opposition backline with numbers and transition quickly up the field.

A lot of progression to the final third also comes through the wingbacks. This is generally done from them playing the ball into channels once more to centre-forwards attacking the depth when the defending team have committed men up the pitch in the press. 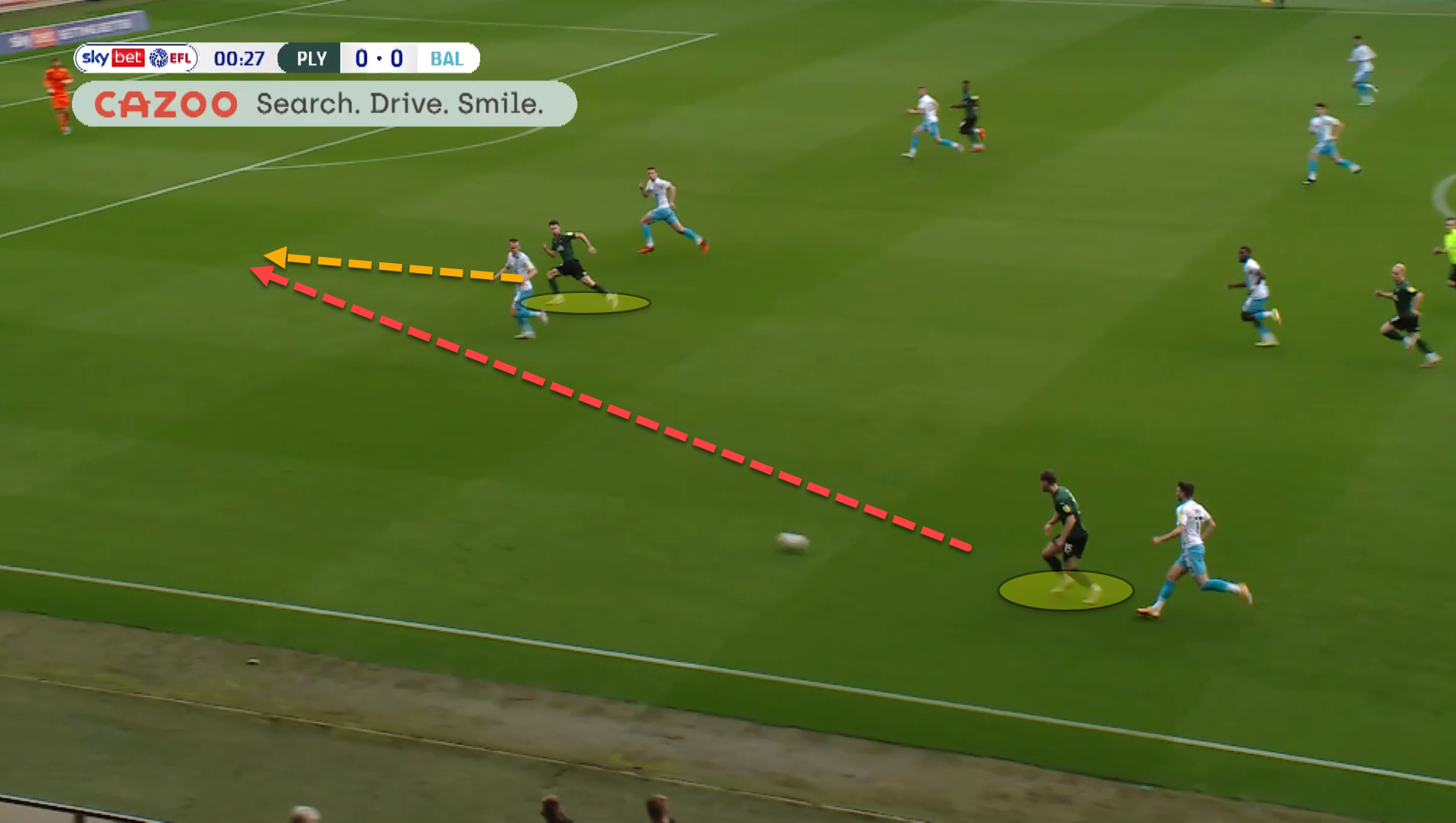 The following image is an example of Plymouth Argyle’s most used final third entries from a recent game against Burton in League One, which backs up the points discussed in this section. 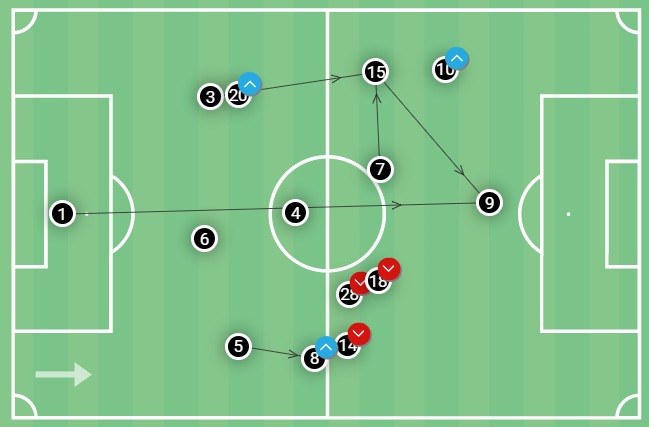 Like their final third entries, Plymouth try and play through balls in behind the opposition’s defensive line quite a lot to create solid goalscoring opportunities for themselves.

Lowe’s side currently play the seventh-highest number of through balls in League One out of the 24 teams in the division. Plymouth are averaging 6.41 through passes per 90 with an accuracy of 35.3 percent.

Ryan Broom is very important to do this as the midfielder, who plays in the left halfspace, has a really impressive ability to break opposition lines with eye-of-the-needle through balls. 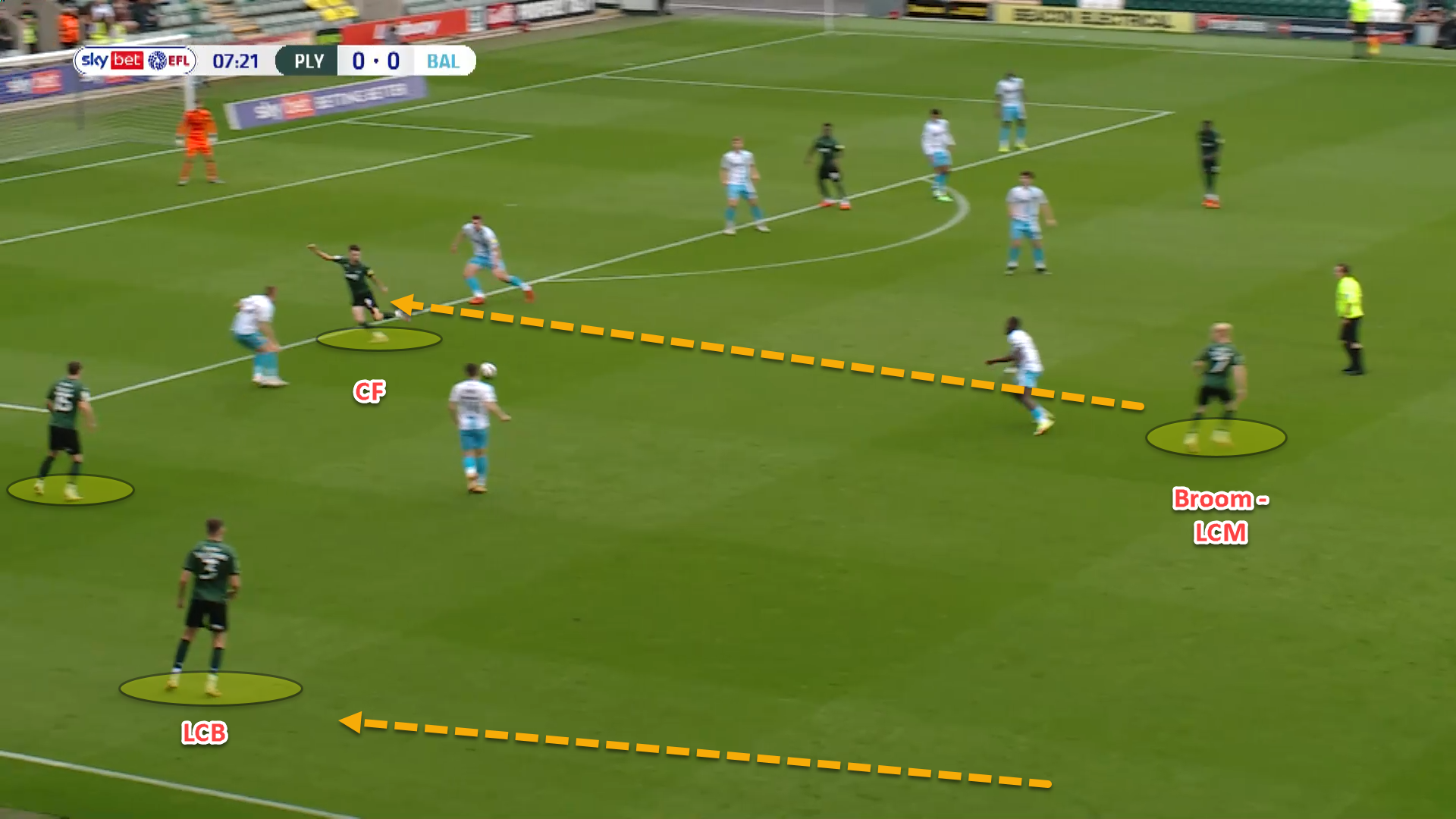 Here, Broom is positioned in the left halfspace and has found the run of the centre-forward in the space between Burton’s fullback and centre-back. This sets the striker through on goal and into a great position to score.

What makes this possible though is the stretching of Burton’s midfield line due to the advancement of the left centre-back, Gillesphey. The defending team’s midfield line is stretched wider because of this and it allows Broom to gently thread a lovely pass through into a very dangerous area, although nothing comes from the attack in the end.

Another way Plymouth can look to score chances in their positional attacks is by putting crosses in the box. Generally, to do this, the ball-near central midfielder and wingback rotate and link up to supply the box into the box. 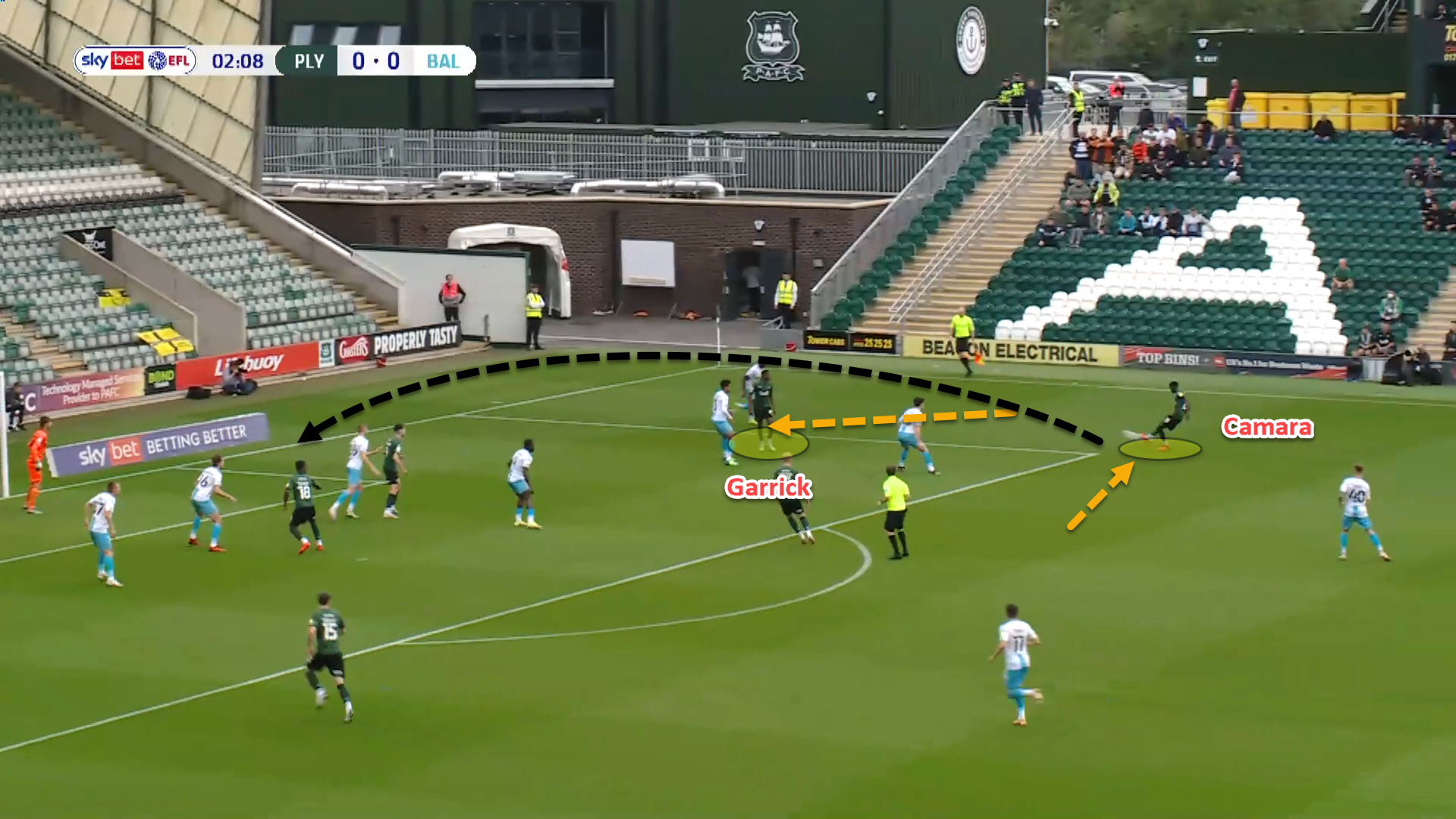 Here, Garrick has made a run forward into the box which has dragged Burton’s defending players and pinned them deeper. Seeing the space, Camara has drifted over to the right flank, completing the wide rotation, and put a decent ball into the area.

Plymouth are currently averaging the fifth-highest number of crosses per 90 with 16.66 and an accuracy of 36.2 percent. 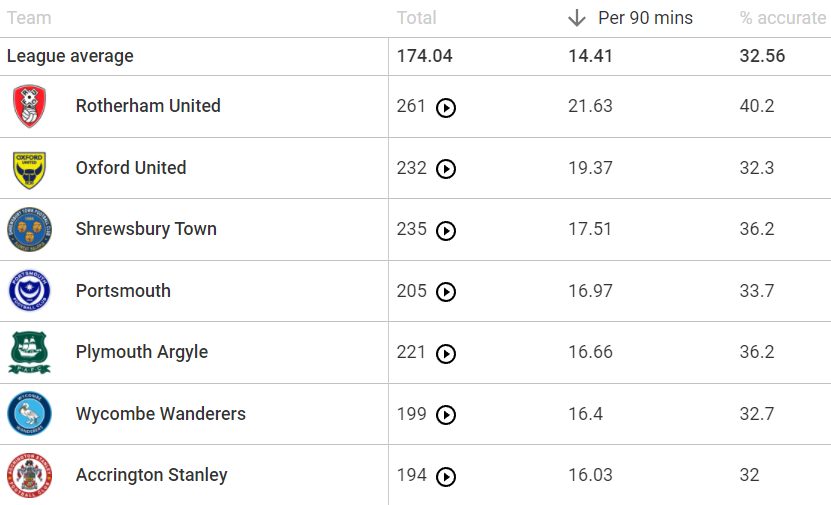 Plymouth are far from perfect but are without doubt one of the most exciting and interesting teams in England at the moment from the view of a football fan and even an analyst.

The lower leagues in English football are rapidly modernising, moving away from the old-school long ball and physical styles of play to more expansive and attacking football with teams even using positional play systems.

Plymouth are an example of this and while the Pilgrims’ impressive unbeaten run in the league may not continue, Ryan Lowe deserves massive credit for even turning them into title contenders in the first place. If you get a chance to watch them live on TV or in person, it will be 90 minutes well spent. 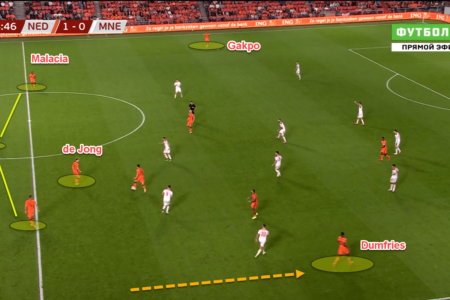 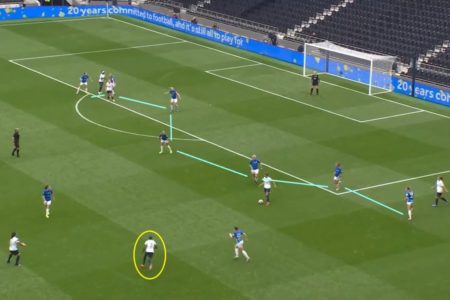 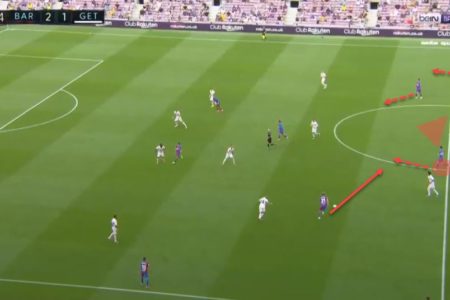