When advancing possession, it’s important that the team does not pass the ball without a clear purpose. The popularity of ‘tiki-taka’ in recent years has given many people the impression that having high possession and passing statistics automatically denotes a top team, when this is often not the case. Possession is pointless unless it is used for a purpose. Pep Guardiola, the coach who inadvertently popularised the term ‘tiki-taka’ has publicly made his resentment for the term known, as it encourages pointless passing, when Guardiola is an advocate of the opposite.

In this tactical analysis tactical theory, I’ll take a look at breaking opposition lines, one of the most progressive tactics of advancing possession.

Lines can be quite an abstract concept to those who don’t watch football. To put it simply, they are imaginary lines connecting players horizontally. In the example below, we can see how a typical 4-4-2 creates three lines. 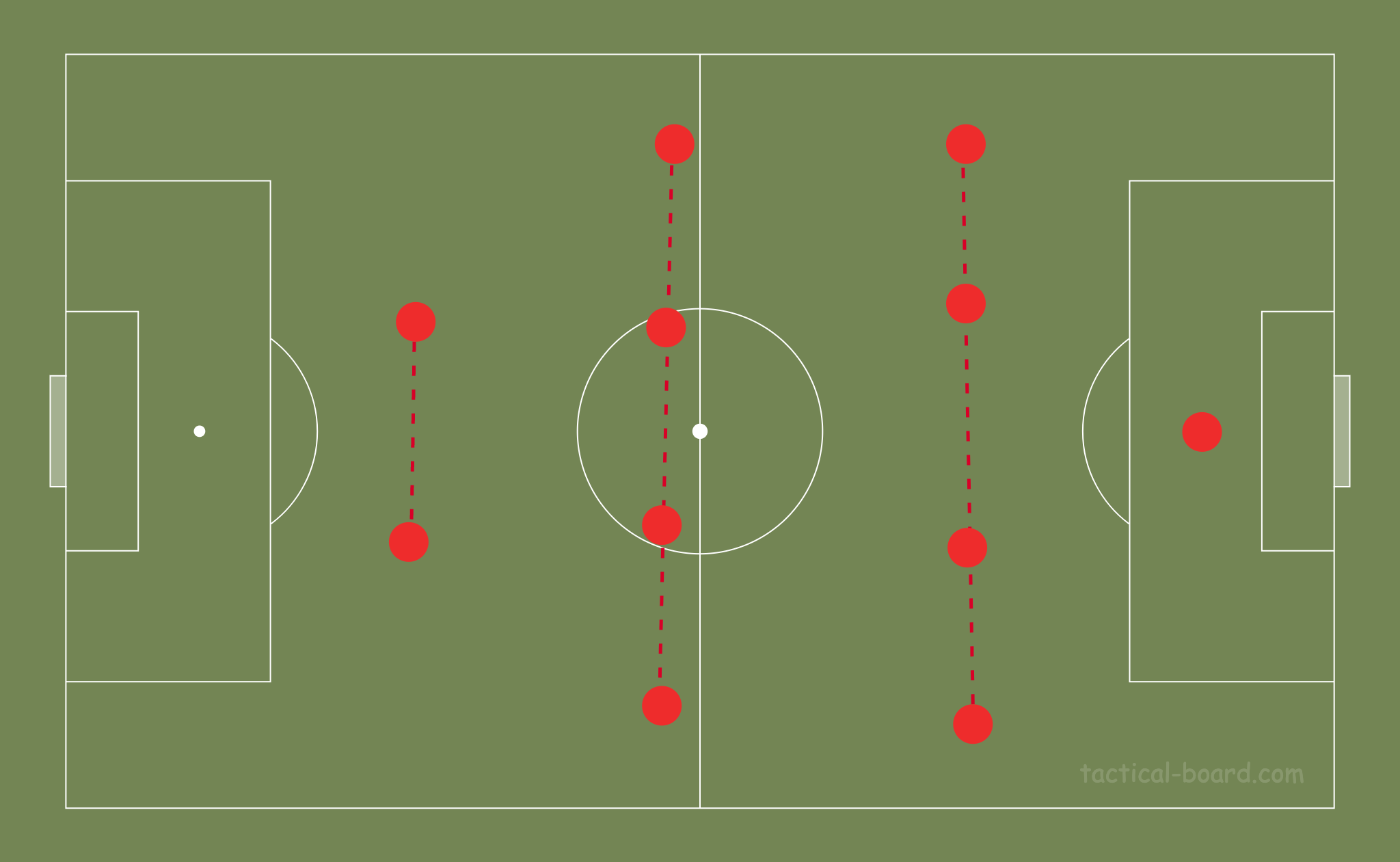 To break a line is to advance the ball between two opposing players, through the line created between them. As shown in the example below, the blue team has broken a line as player A passes the ball through the opponent’s line to player B. 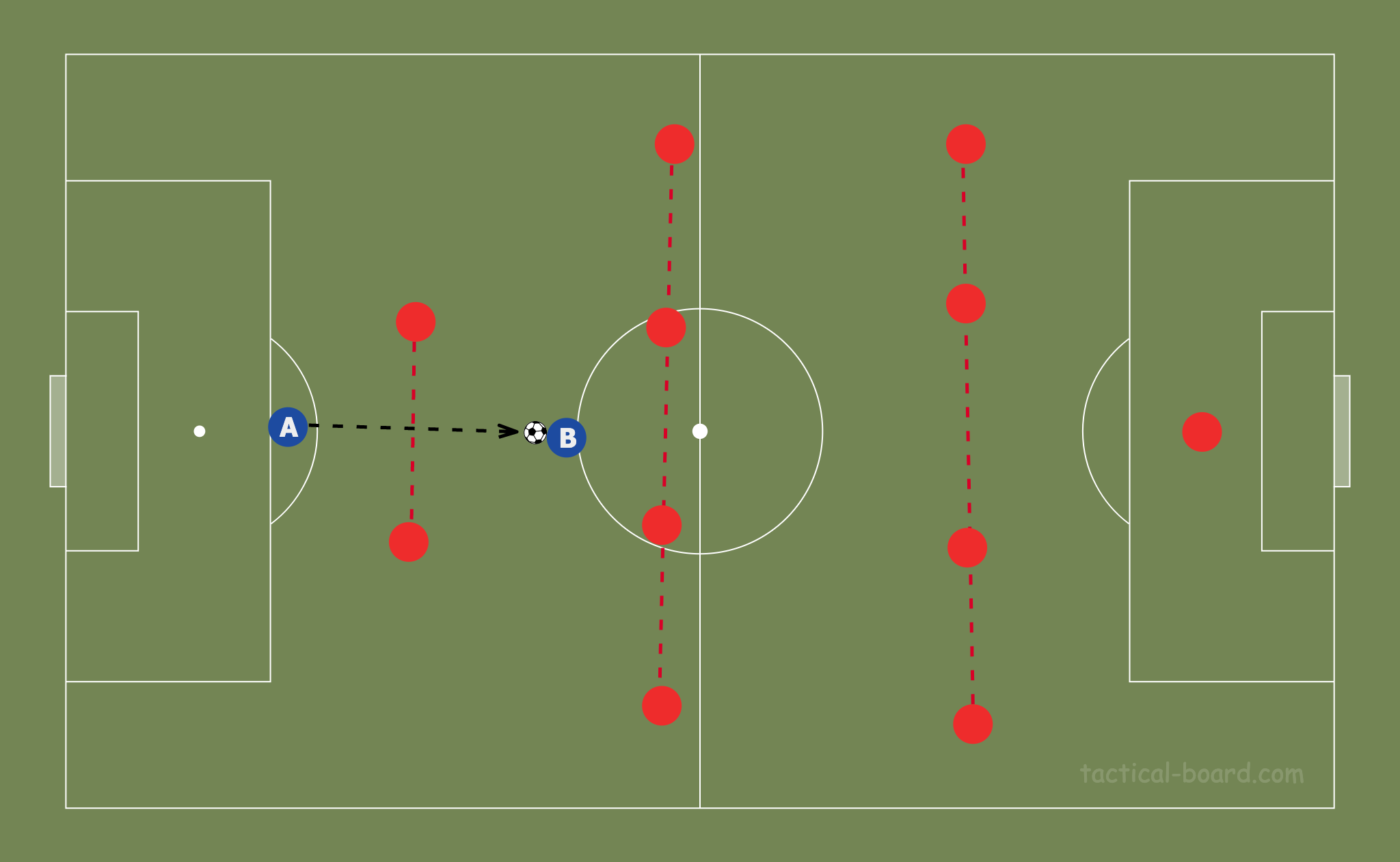 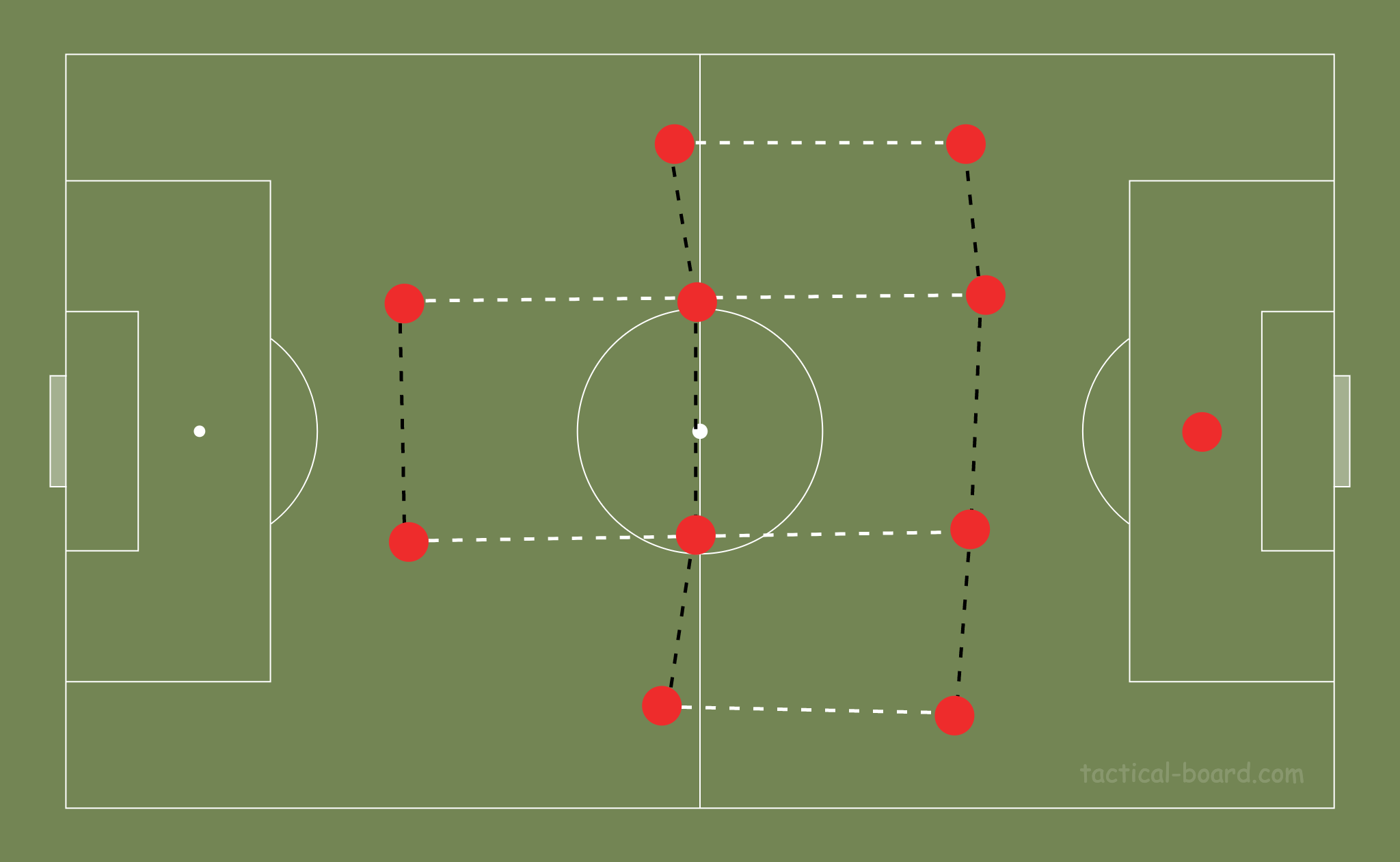 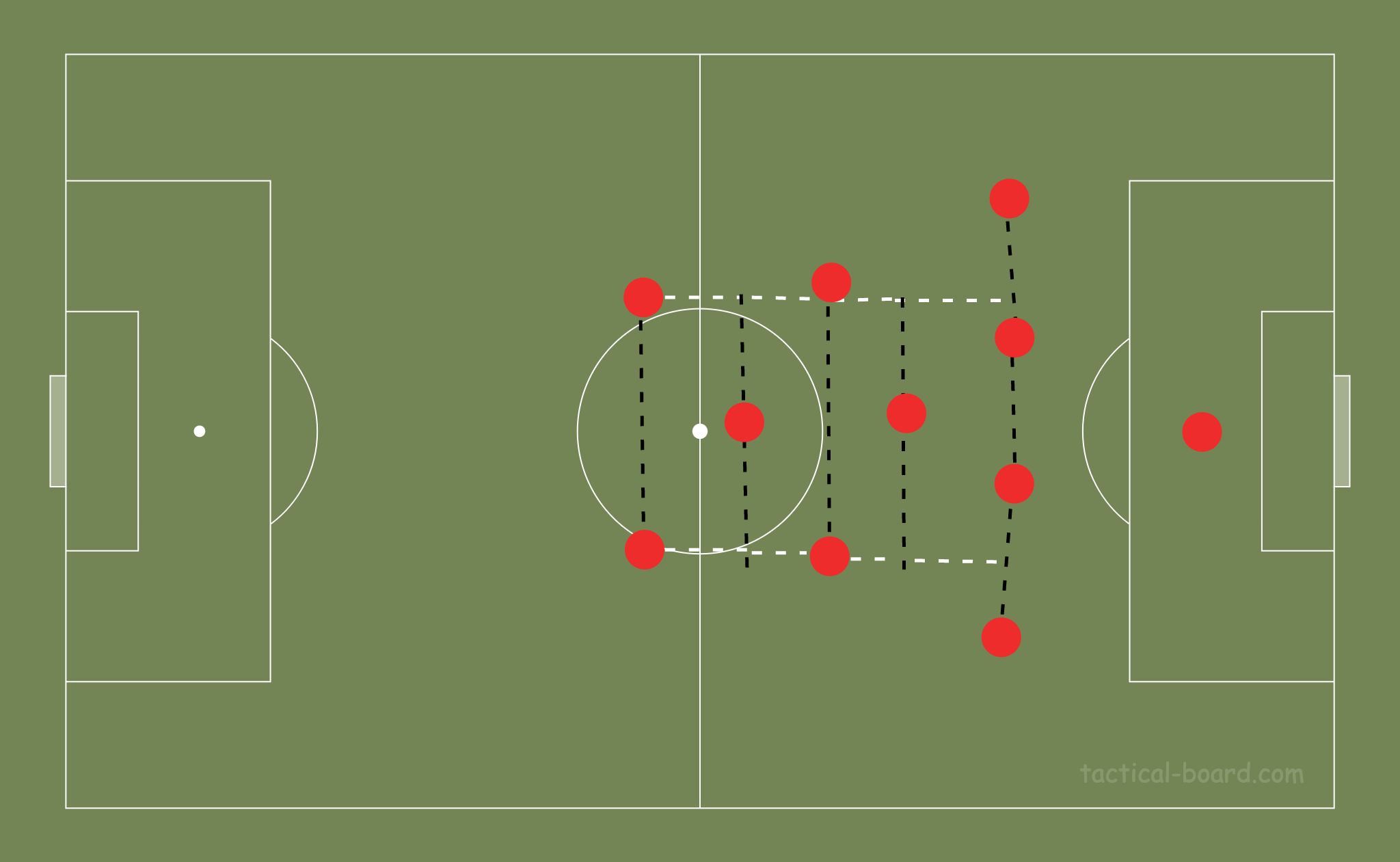 The shape above is both vertically and horizontally compact with additional players in midfield. However, the more lines there are in a defensive shape, the narrower the shape becomes, leading me to the next section.

To increase the efficiency of playing through lines, we can attempt to undo compactness with the movement of players. In the below example, Blue players A and B are narrow, letting Red players C and D maintain horizontal compactness and leaving the space to play through the line very narrow while decreasing the chance of successfully playing through. 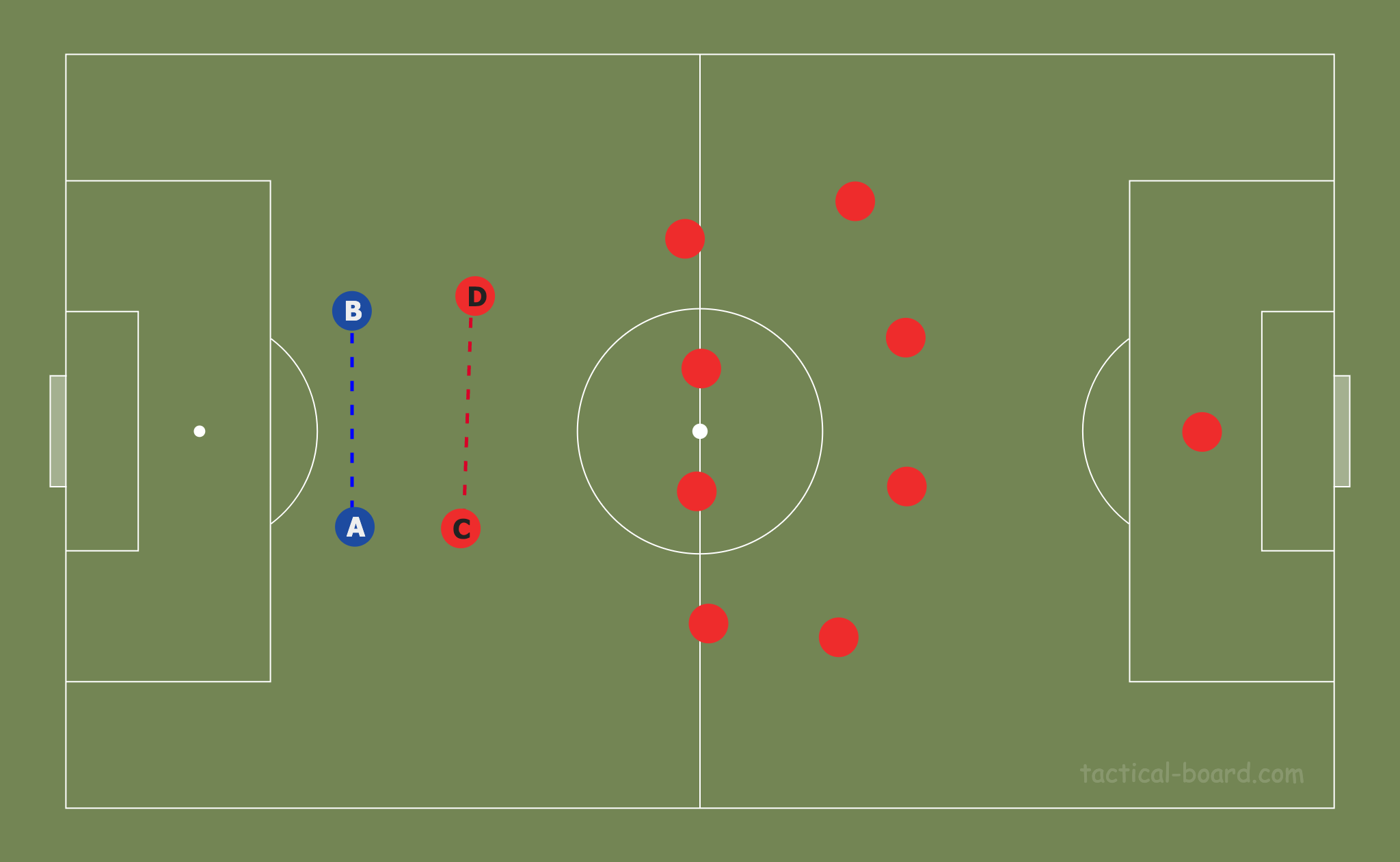 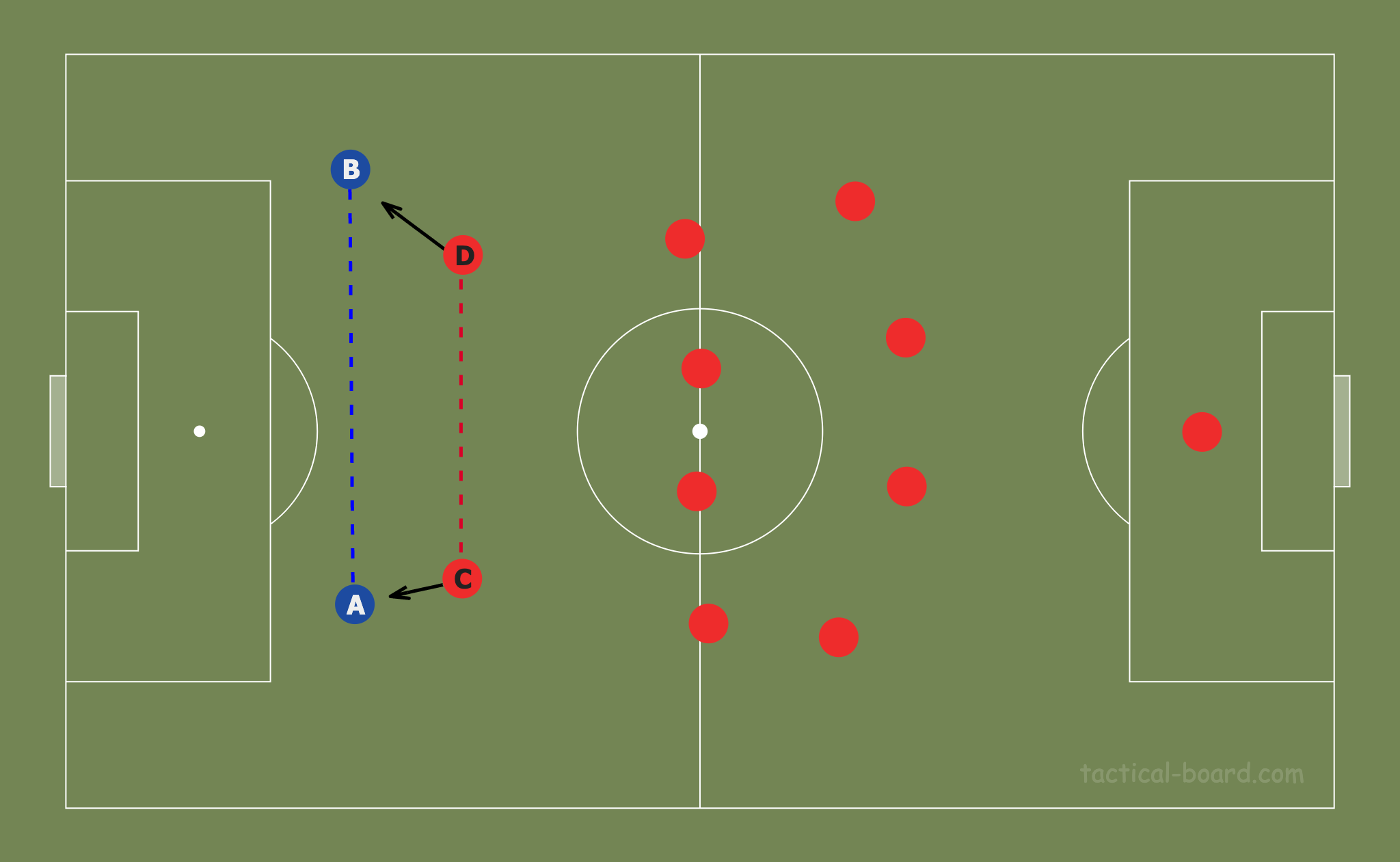 The way we can manipulate opposition vertical compactness is by utilising depth. In the next example we can see how Blue players A and B are positioned with limited depth, allowing the Red team to maintain vertical compactness, decreasing the space between their lines.

Using depth to undo vertical compactness is particularly effective against teams who employ an aggressive man-marking system, as it is easy to manipulate their positioning with movements. 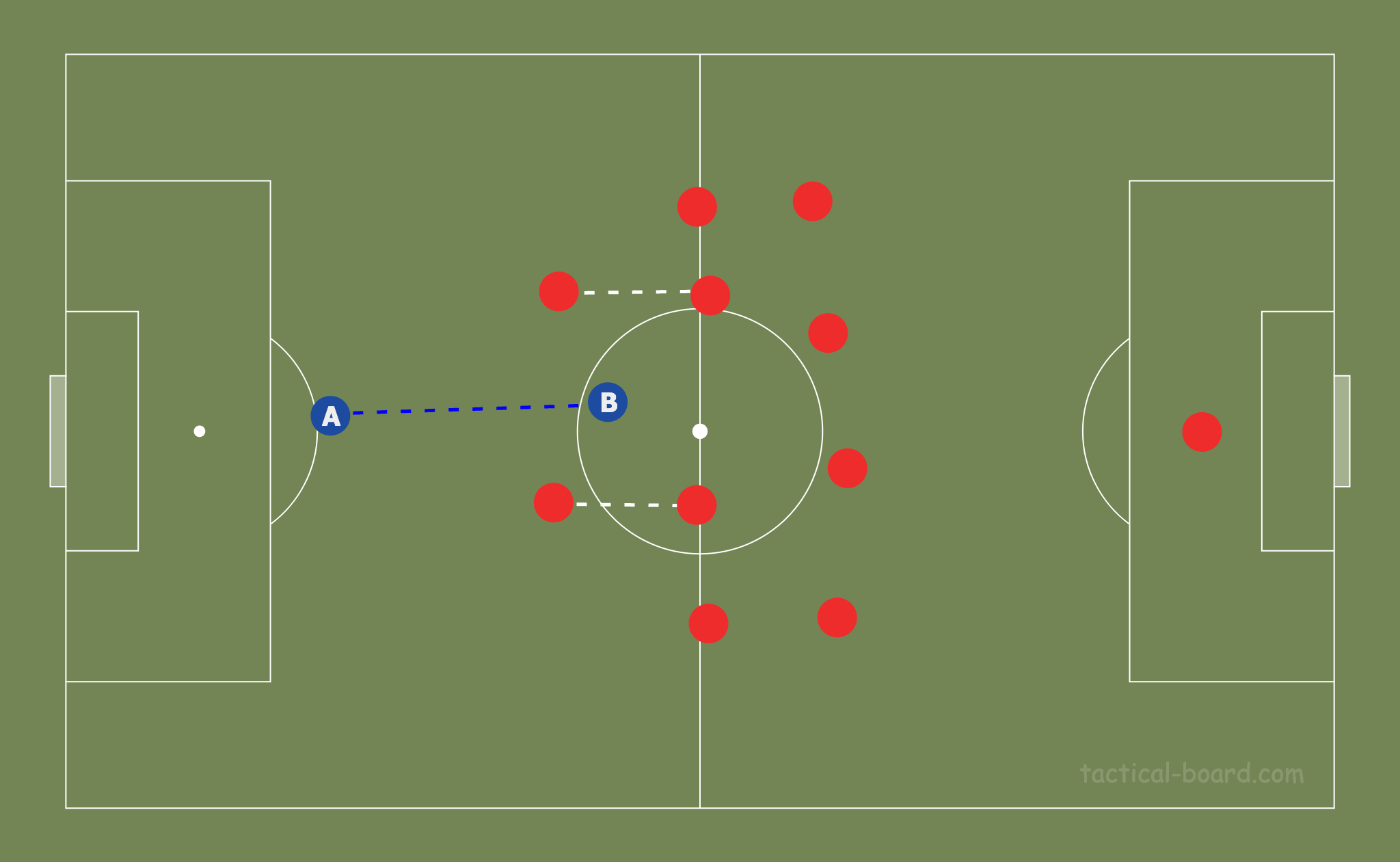 In the next example, the Blue team have utilised depth to decrease opponent vertical compactness. Player B is much deeper, dragging the opposition players with him, creating more space in between the lines. 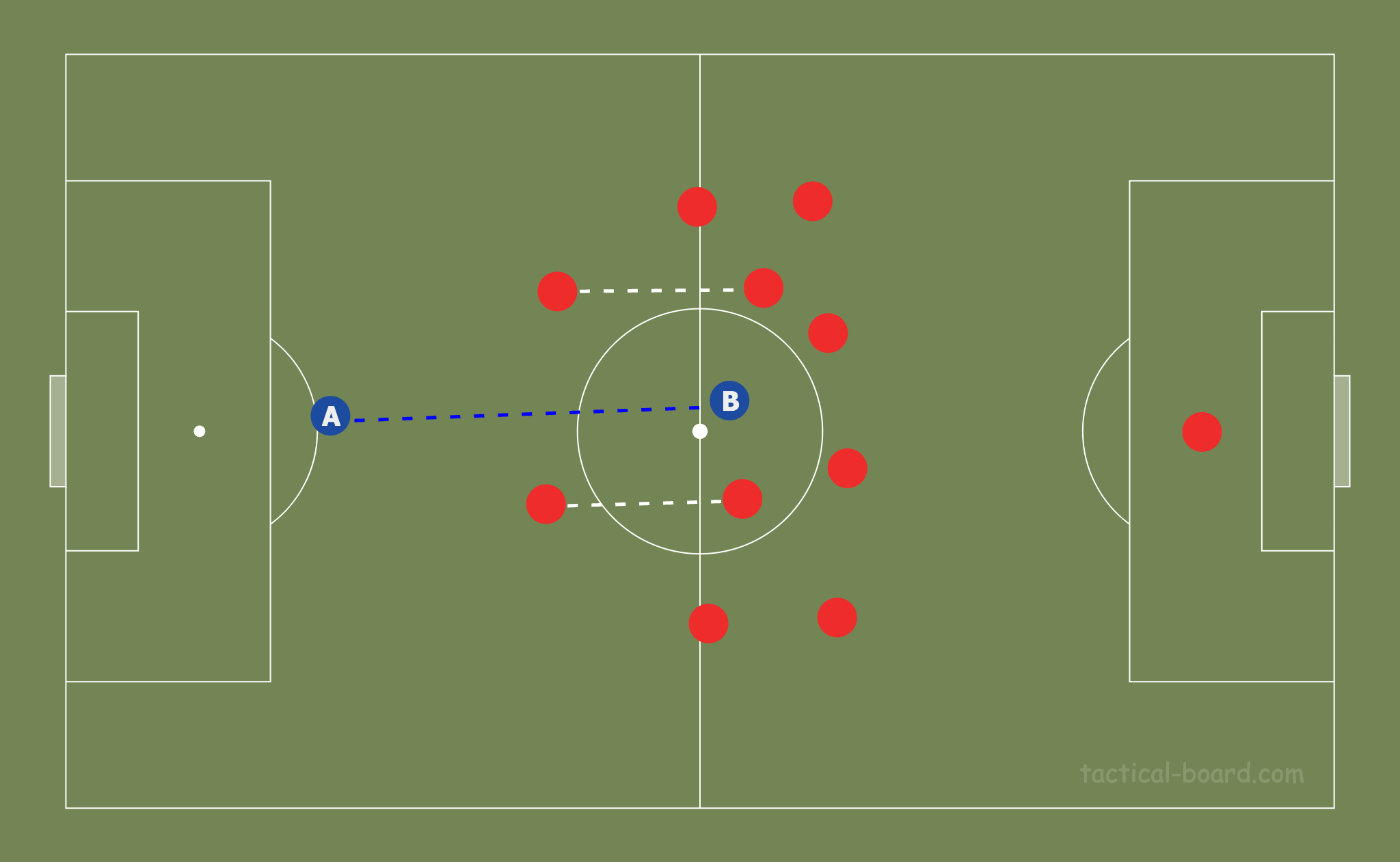 Although this is a tactical theory piece, the technical aspects of breaking the lines are extremely important. The technical points I’ll take a look at are the weight of the pass and quality of the touch. The weight of the pass is important as a pass which is too slow is likely to be intercepted while a pass with too much pace is hard for the receiving player to control. The importance of control when receiving a pass in between the lines cannot be overstated.

The whole point of breaking lines is to advance possession in a progressive manner. This is the reason why the direction of the receiving player’s first touch, and therefore body position, as the pass is played is so imperative. In the below image we can see an example of a player who is facing the ball straight on, forcing him to play backwards, defeating the point of breaking lines. 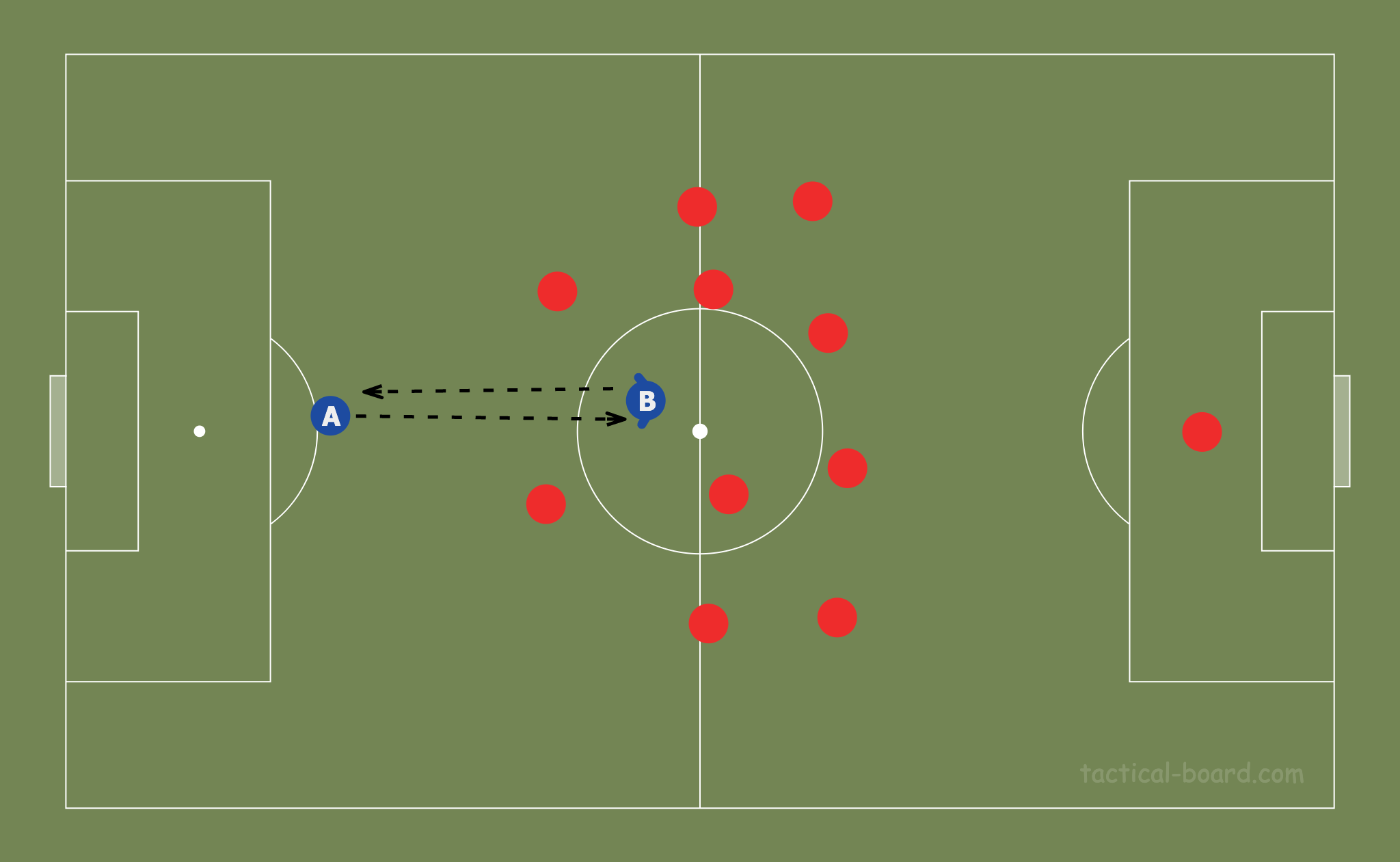 Below, we can see an example of good body positioning by Blue player B, who, this time, faces the pass at a slight angle, allowing him to receive on his further foot and face towards the opposition goal. 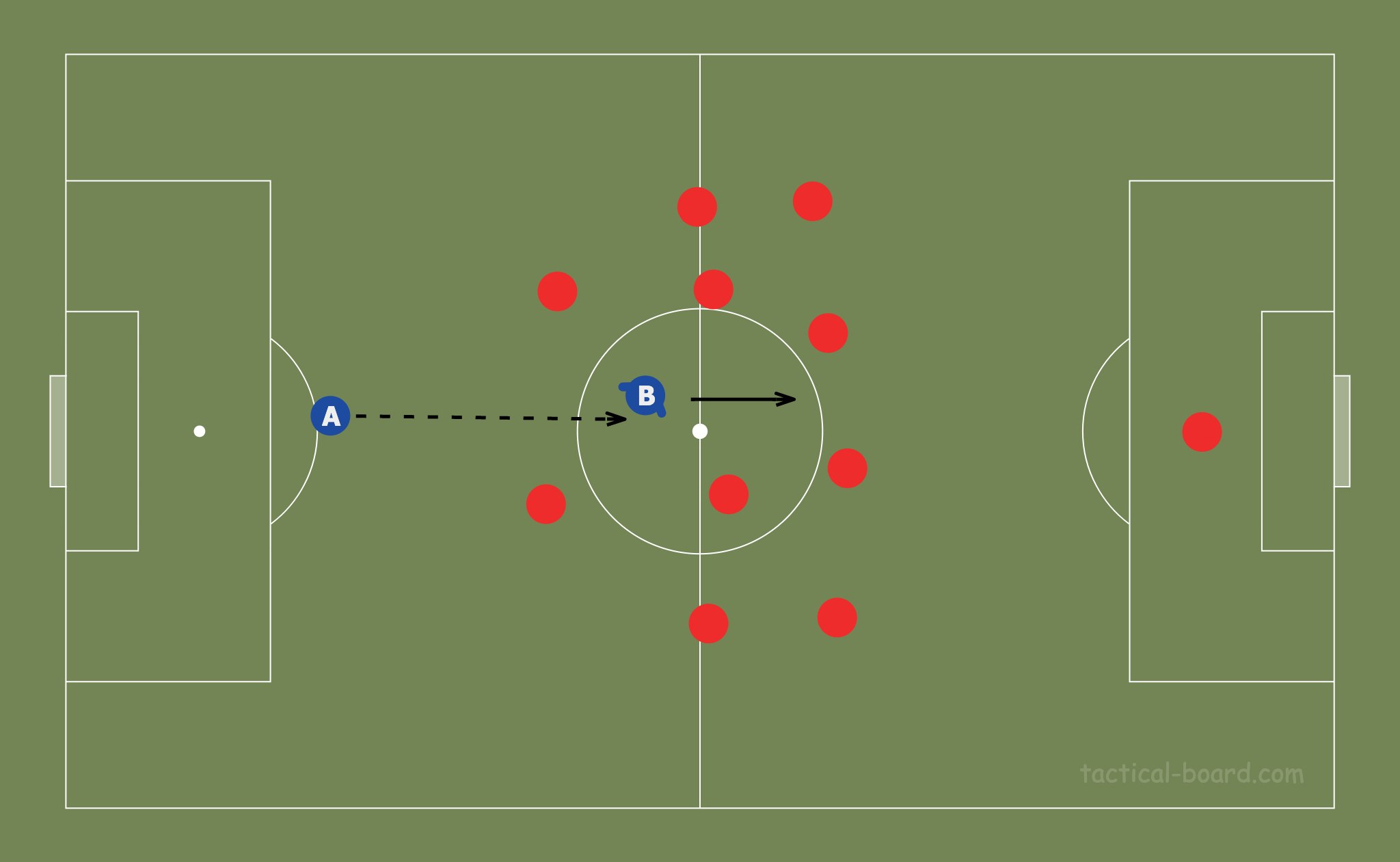 As there are multiple facets of breaking lines effectively, it’s important that players are taught properly about the importance of positioning and are coached accordingly. When coaching aspects that have multiple dimensions it can be beneficial to incorporate unopposed, semi-opposed, and opposed drills to slowly integrate concepts.

The first drill is an unopposed drill where players simply have to receive between lines created by cones and turn and pass to another player, and the drill repeats. 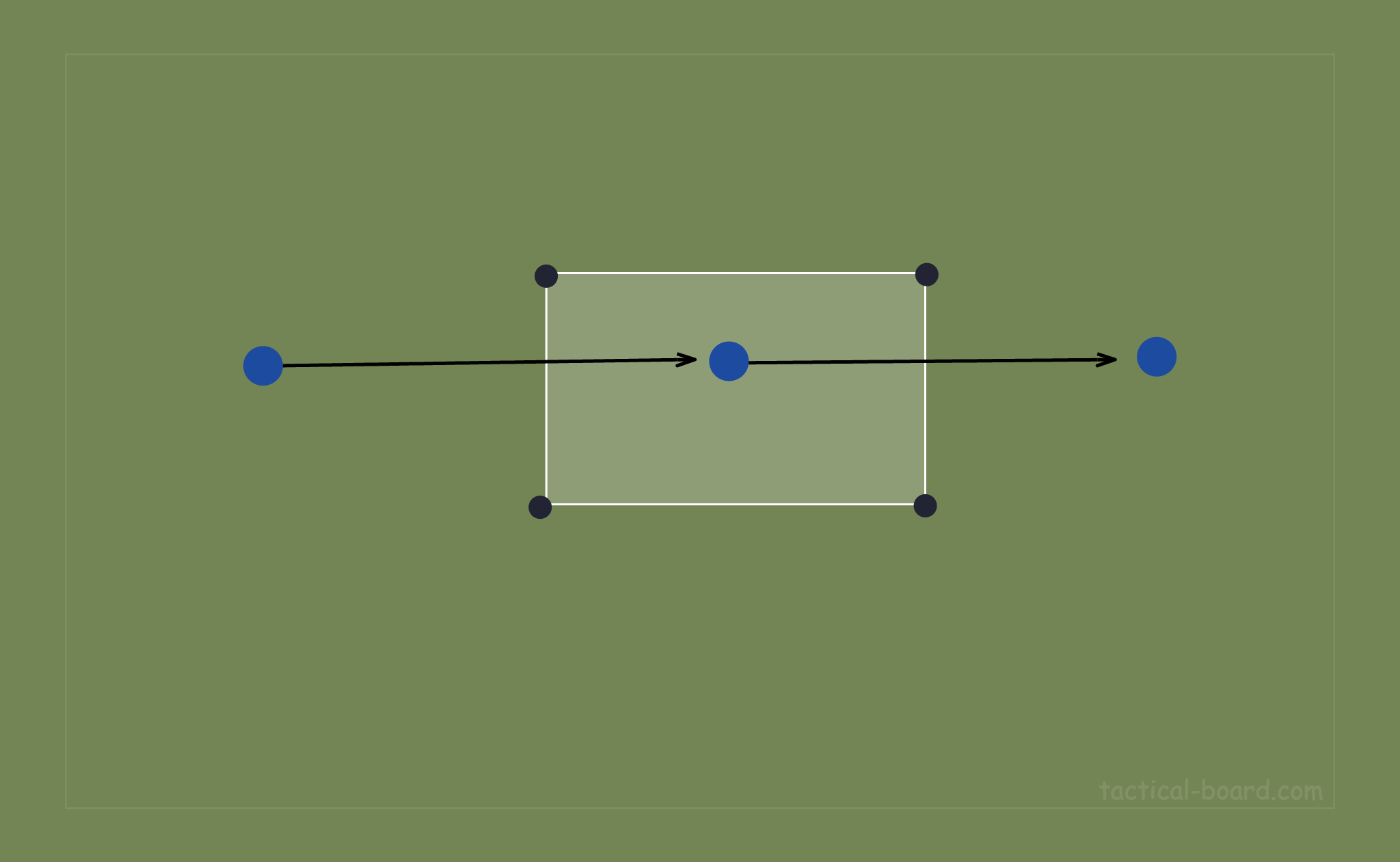 The below semi-opposed drill is an example of a small-sided game where players are encouraged to position themselves between lines and make small movements to make themselves available.

The Blue players on one side are tasked with playing through the line to players on the other side of the line. The Red team score by intercepting passes and cannot leave their area marked it white. The Blue team score by scoring in the small goals and coaches can limit the players to two touches to encourage taking touches towards the goals. 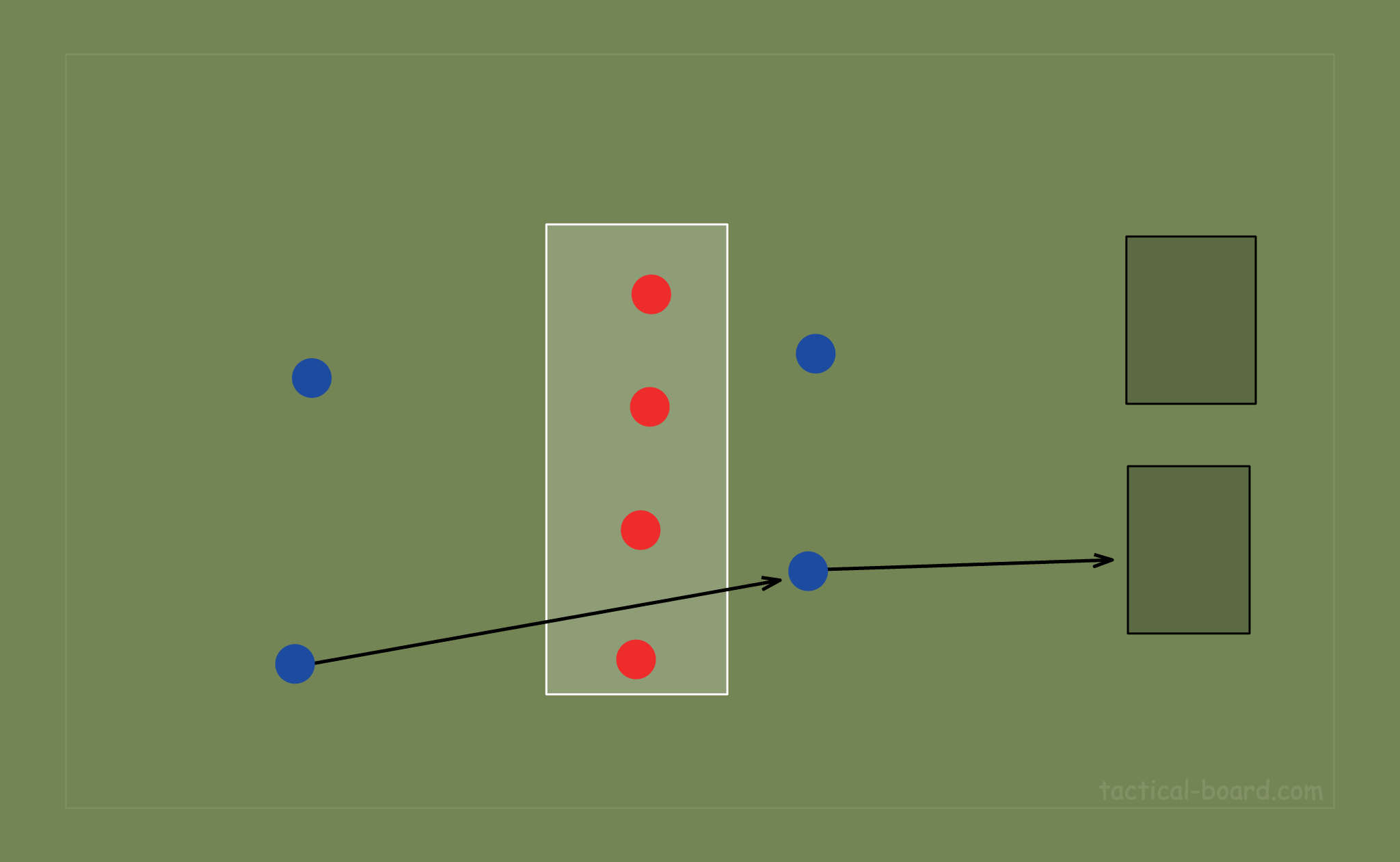 The third drill is fully opposed and allows the defensive players to press. This allows the attacking team to undo compactness by using width and depth. 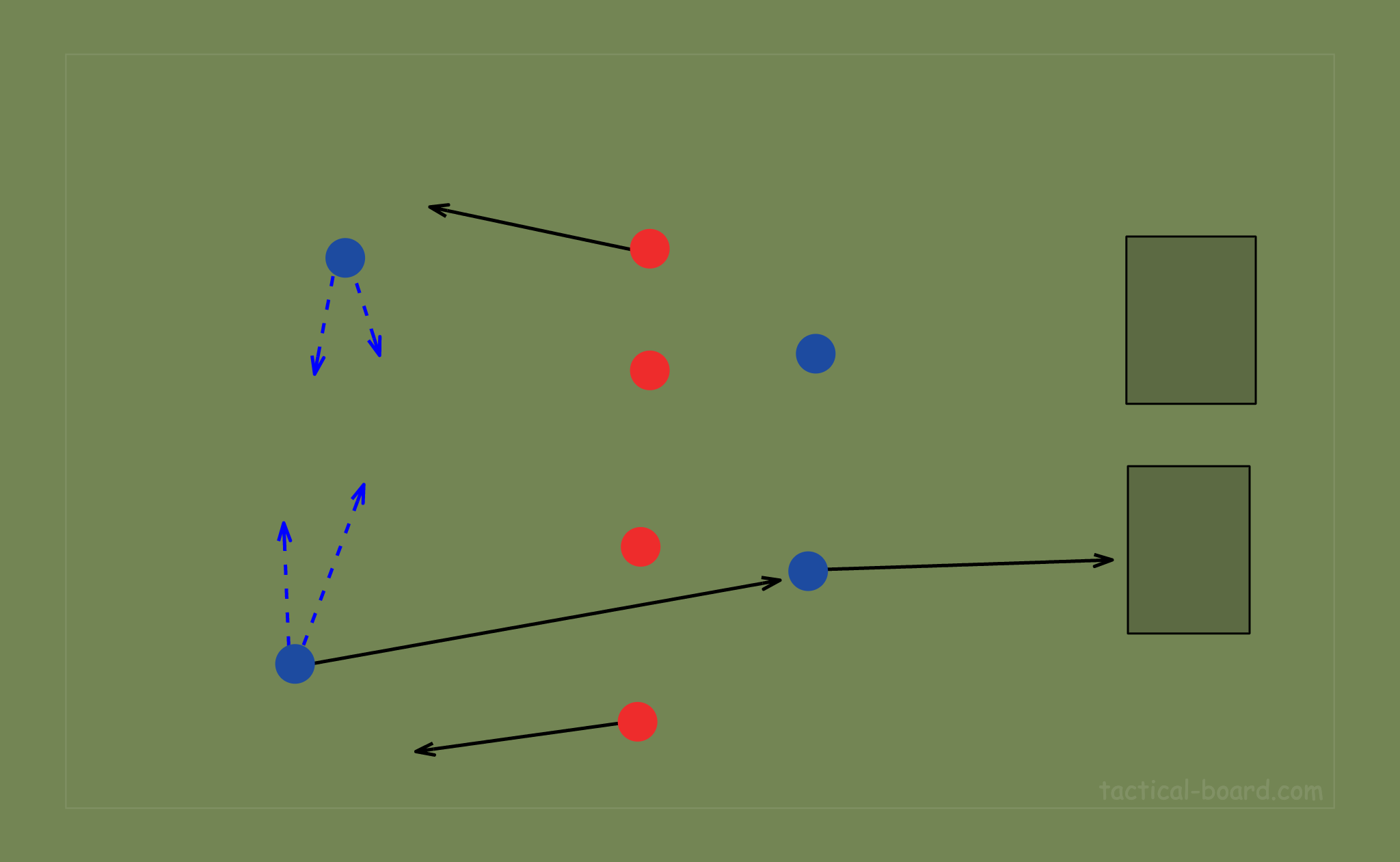 Breaking opposition lines is an extremely important part of advancing possession in the modern game, which was shown by this tactical theory. It has multiple tactical and technical points that can be coached to the players in order to efficiently utilise this technique. 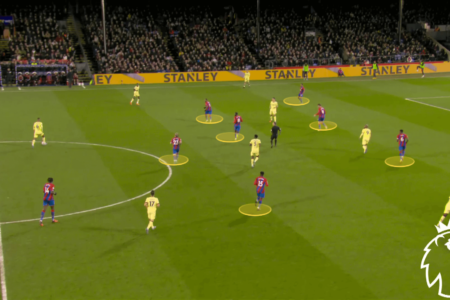 Crystal Palace’s improved performance under Patrick Vieira was underlined by their well-thought out display against Arsenal. The team achieved a […] 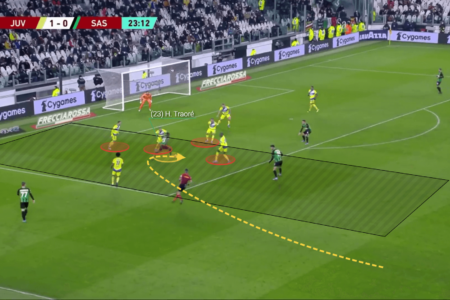 Hamed Traore scout report: How the 22-year-old’s performance had an immediate impact on Sassuolo’s attack