Below, we look at eight patterns of play you can use in the 4-4-2 system, four are for central penetration while the other four are for wide penetration. If you are coaching the 4-4-2 system or you are participating in any high-level coaching courses such as the UEFA  A or B licence where patterns of play are a requirement you may find the below valuable. First, we look at the patterns, but more importantly, we show you how you can get success on the training ground through the use of field mapping and the players’ discovery of ‘what if’s’.

Why train patterns of play

Bottom line, we train patterns of play to help players identify and execute pre-determined passing and moving combinations to beat the opponent’s defence. Sometimes that may mean penetration to score a goal, other times it may also mean playing through the opponents forwards or midfield to get through their defensive block or pressure. Executing patterns do not always deliver the desired results; however, depending on the targeted outcome, secondary success can be achieved. Consider that creating a goal-scoring opportunity was the aim, having been stopped short in the execution of the pattern of play your team could have won a corner, penalty or free-kick in a dangerous area. Nevertheless, even retaining possession through good passing and movement can serve to disorganise the opponent’s defence, whereby your team can redistribute possession to another area of the field to have a better chance to penetrate.

If you are a coach, also consider individual and team confidence. When the attacking team is only playing in reaction to one another, this means they are trying to discover moments and gaps out of pure randomness to get success. At the same time, the opponent can anticipate and defend.
The likely outcome is a lot of technical and tactical errors that subsequently result in higher turnovers, which weighs a players confidence. On the other hand, when you have a team that knows the system and they can execute plays on minimal touches, and at such a high speed the opponent cannot always react to this, which in turn, offers a higher chance of success.

Below we have an example as to how a pre-determined pattern of play used by Juventus to play through and penetrate the Inter Milan defence in their most recent Serie A meeting. Notice that Inter Milan have man-marked all of the Juventus players in their half.
The passing and moving combination used here by Juventus is represented as ‘Pattern: Wide C’ below. 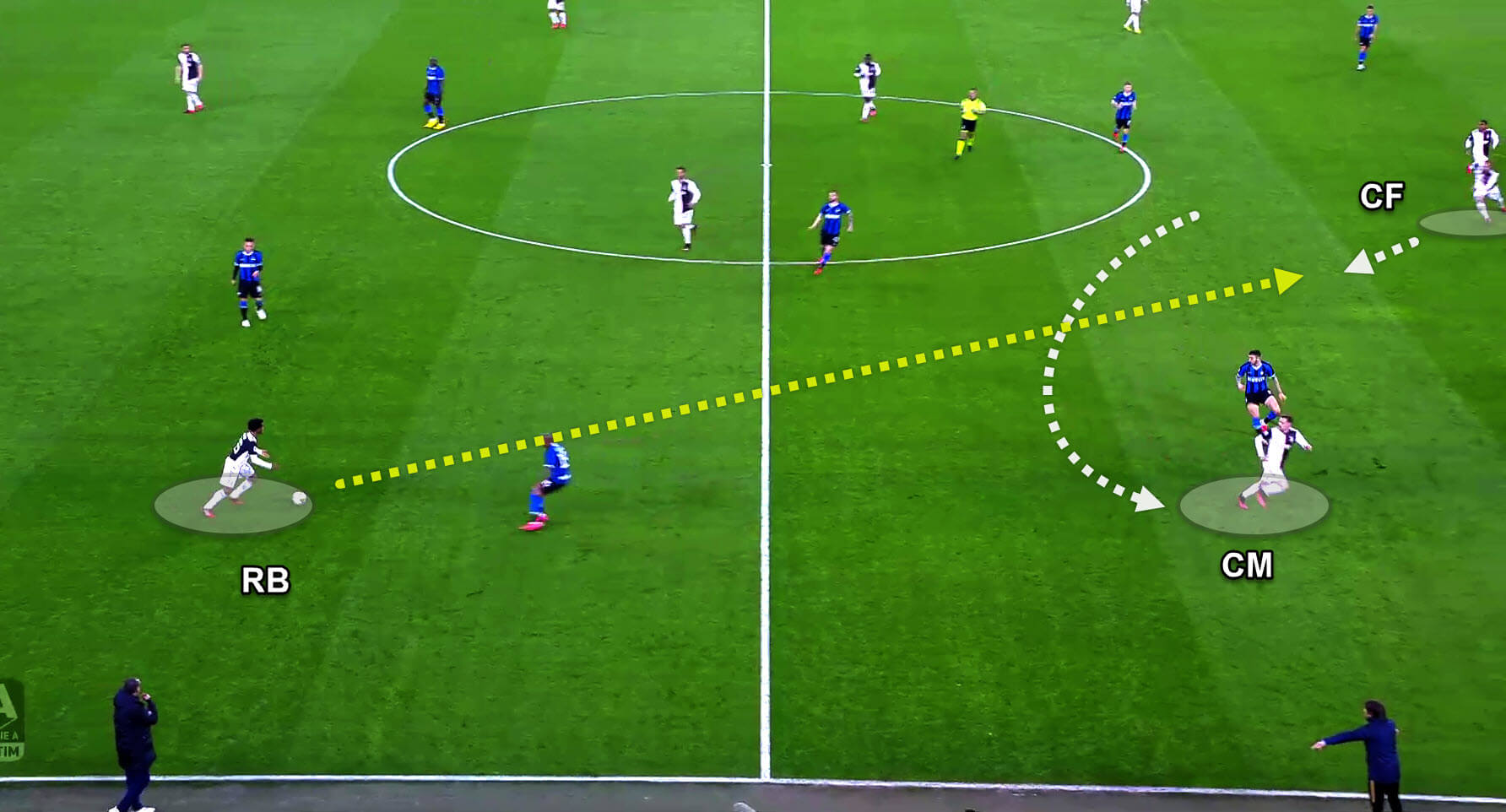 Above we see the Juventus ‘RB’ is looking to play a forward pass to progress the attack. Moments before the ‘RB’ plays the pass the ‘CM’ Aaron Ramsey makes an angled run from the centre to the right side of the field. As the ‘CM’ vacates the space, the ‘CF’ Gonzalo Higuaín drops in to receive the pass from the ‘RB’. 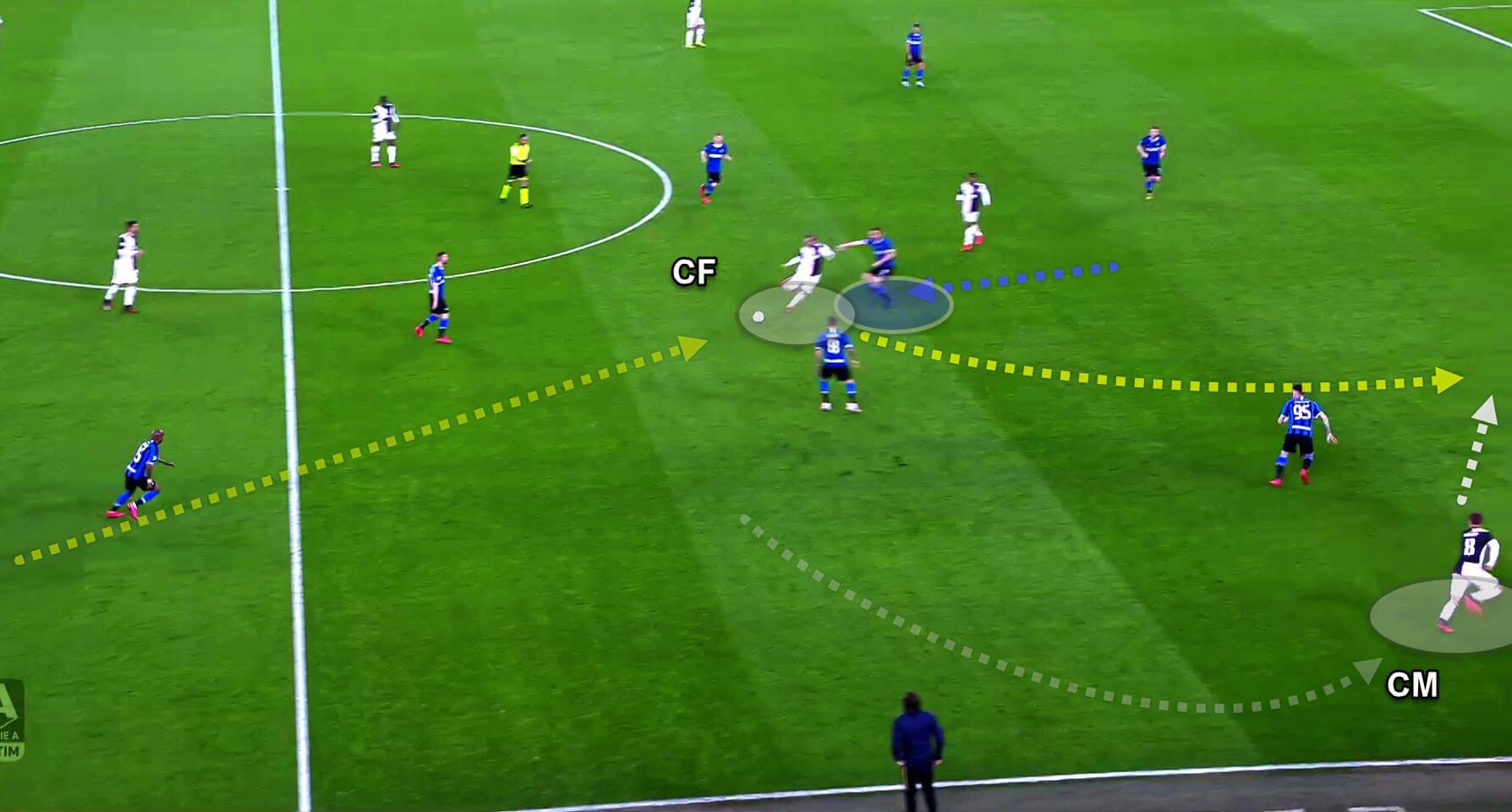 On his first touch, the ‘CF’ plays a penetrating pass into the space for the ‘CM’ to meet on his run into the box. Two elements are crucial for this pattern to work; passing quality and movement. If the first pass from the ‘RB’ is poor, then the ‘CF’ can not play a first-time pass to beat the defence. Similarly, If the ‘CM’ is late making his run, he does not get to the ball ahead of the defender; also if he is too early making his run, he’s caught offside. 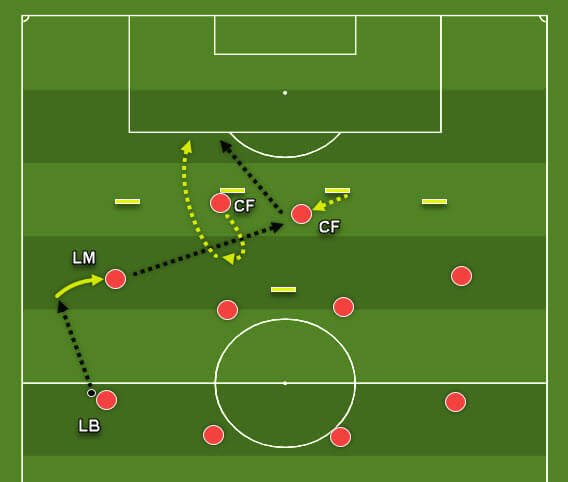 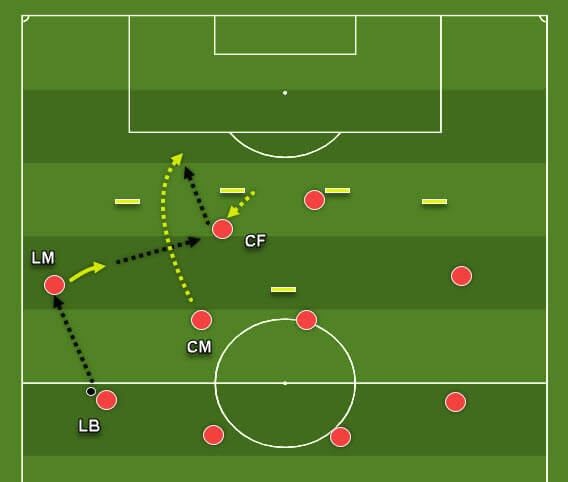 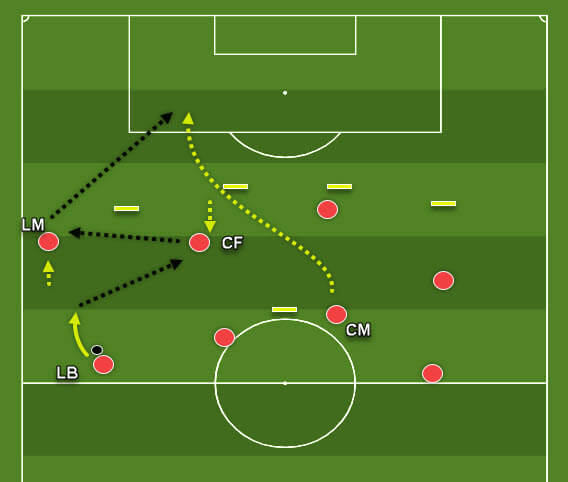 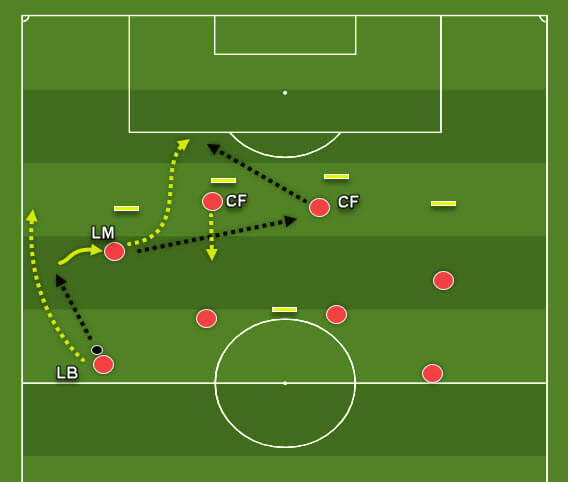 Again all patterns can be mirrored on both sides of the field. The ‘yellow’ icons on the field represent mannequins, work at your own pace as you may want to gradually introduce one, two or three defenders along with the mannequins over time. 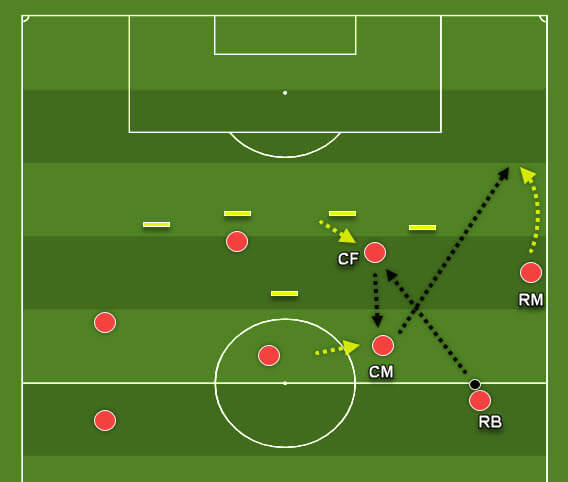 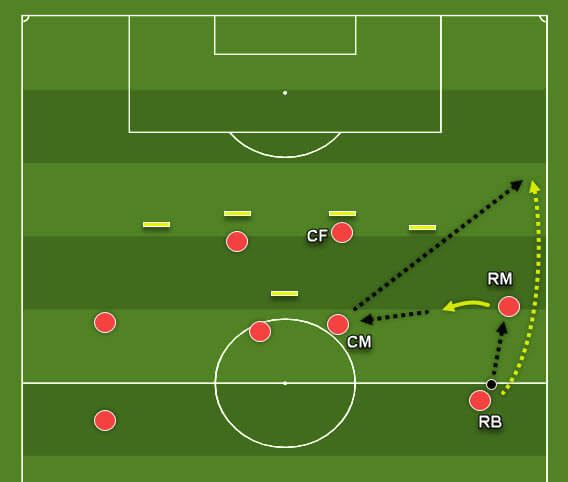 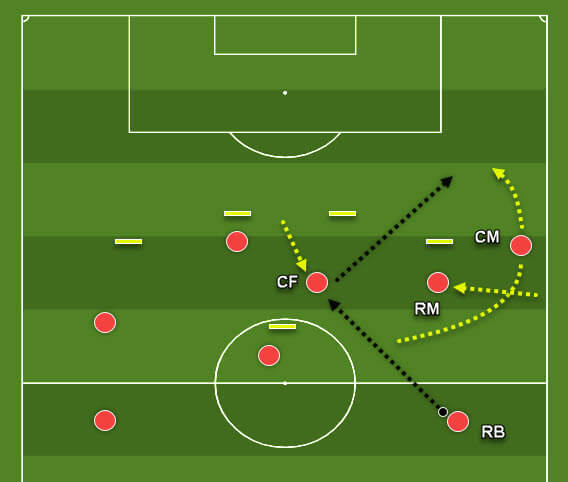 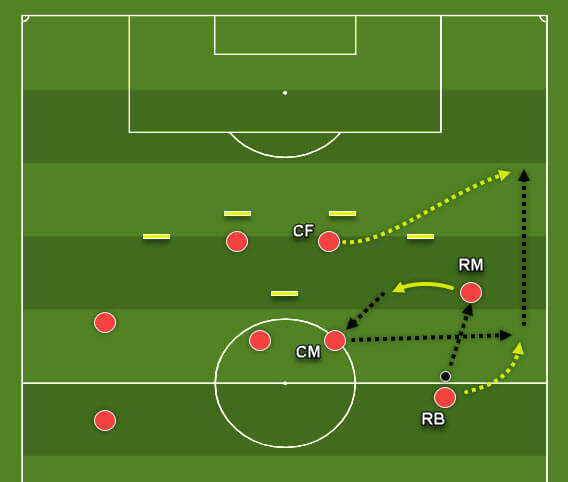 Here we look at the implementation for effective learning. For the format of these types of sessions, I would promote training the patterns unopposed in the beginning and gradually introduce defenders.  As the patterns can be mirrored on both sides of the field, I would encourage setting up your preferred pattern on both sides of the field and have them working in alternation to one another.

After working on perhaps no more than two per session, we then go into a conditioned game outlined below, which is designed for players to become tactically aware in the 4-4-2 formation of their options and to help the players identify opportunities to execute those trained options.

Mapping the field is not a new concept; however, it is becoming more commonplace and referenced by tactical analysts and writers in annotations. The advantage of mapping the field is that it supports the coach in his or her aims to tactically educate the players. As well it also creates habits in players by training in condition to the designated channels and zones.

There are many ways to map a field; some choose vertically, some choose horizontally while some honour a hybrid of both. None of which are the authority, mapping has always been a subjective and personal preference to coaches and teams. Through the use of mapping, terms like, ‘half-space’ and ‘Zone 14’ were born. If this is alien to you, do not worry, that does not concern us or hold any value here. Instead, how we map the field for training patterns is both simple and effective for player and team development. 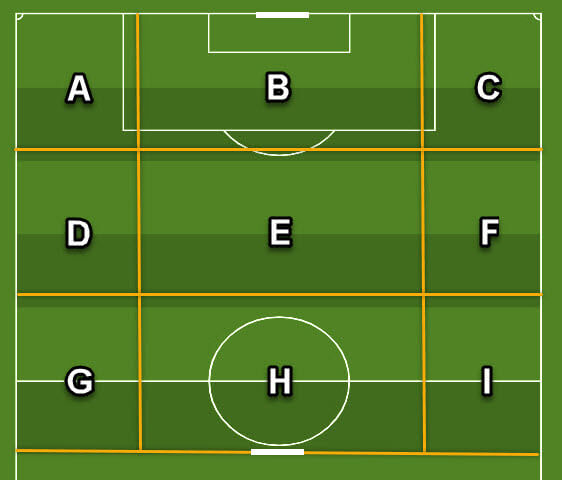 We are going to create nine zones inside one half of the field; however, going a little bigger or smaller is completely fine. The two vertical lines can be made by coming in approximately two-to-five yards inside the box and making a channel with cones reasonably spaced. Secondly, the two horizontal coned lines should reflect three evenly spaced thirds of the half. To help with player buy-in as well as understanding, why not ask the players to line the field for you by showing them the image.

As for the naming of each zone ‘A-B-C’, this is simply for referencing to support the coaches understanding. For the players own tactical learning, you can use the same letter reference system, numbers or even designate colours to the area based on the colour of the cones you have laid down in those specific zones. Once the field has been set up, then we look at creating a conditioned game that honours the 4-4-2 shape. 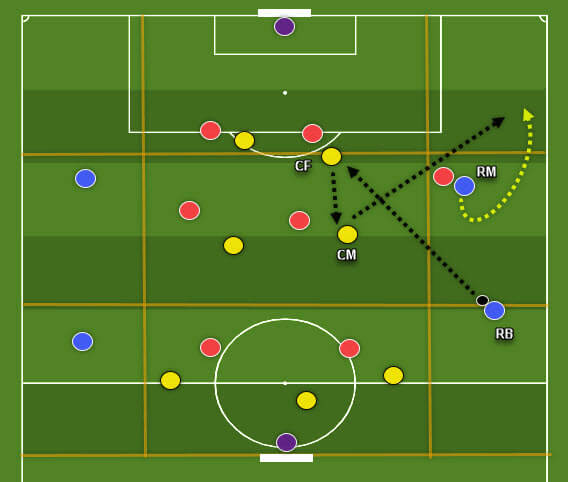 Above we see an illustration of the yellow team combining with the blue team to play pattern ‘Wide A’. As annotated above the blue players are acting winger and full-back. These conditioned games offer the opportunity to identify the option in a controlled space while still having the realism of reactive defenders out to disrupt the passing sequence. 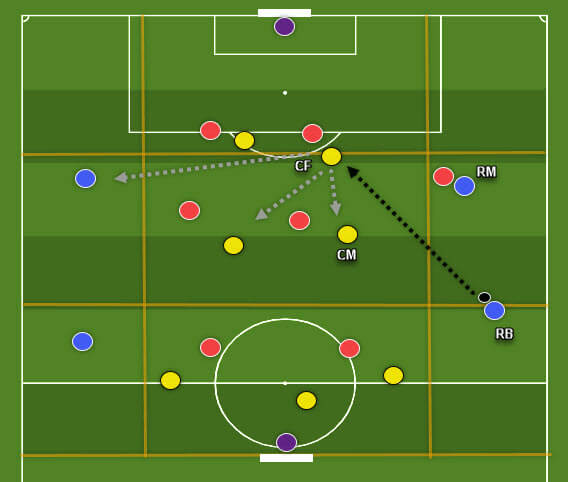 In the illustration above, we see how a player might categorise and identify his ‘what-if’ options if the pattern cannot be completed as planned. The black line represents the first pass to the striker while the broken grey lines represent the strikers’ options when in possession. Assessing all options from left to right, the first option is an attacking pass to the opponent’s weak side on the left. Should the CF have the ability and opportunity he can play to the LM (blue) in zone’ D’. The two next options would be either CM who are supporting from behind. By mapping, the field players are better able to assess their options in a game situation to pick the best option if the penetrating pass is denied to them.

The biggest challenge is getting players to identify all at once the trained pattern of play at the same time in a 90-minute match. However, with the right conditions of open play in training, we can develop each players capacity to read the game and identify those moments. I have found this methodology of field mapping in a conditioned game to be an effective learning method by training the players’ ability to identify moments to use patterns of play in a competitive match.

Options central and wide: We have outlined a total of eight options for a team who plays in the 4-4-2 system to seek out, create and execute. Passing qualities, as well as the right timing and movement, will always be crucial essentials to get success. In the beginning, when working with your players, narrow it down to one or max two patterns in a week. Let them get used to this, learn the pattern well and build confidence.

What-If’s: *This is usually where a coach has to show his value as a mentor, as there will be plenty opportunity for stoppages in the conditioned game, helping the players discover their what-ifs will be crucial for developing a confident possession-based team. Remember it is essential for players to identify not only their patterns of play but also know their what-ifs if the desired outcome cannot be reached.

Mapping the field: Not only for training patterns of play, there will also come secondary success from this methodology of mapping the field. Players improve their tactical awareness, and by understanding certain positions to certain zones at certain times, it serves to help them in their decision making and subsequently their confidence.

If you enjoyed and found this article valuable, or you still have some questions or want to discover more, write to me on Twitter @easytactics. I will follow up with another coaching piece soon on ‘getting success with wingers attacking from opposite flanks’, only here on totalfootballanalysis.com.