Cagliari 2019/20: Their impressive start to the season – scout report

Cagliari had a strong summer in the transfer market and seem to have capitalised on that with an impressive start to the season. However, there are some underlying statistics that suggest Cagliari are getting more out of their performances than they actually should. This tactical analysis scout report will look at Cagliari’s tactics and the statistics that suggest they have been somewhat lucky so far.

Cagliari might have sold their prized jewel Nicolò Barella in the summer, but they invested the money from his sale to Inter wisely. Firstly, Radja Nainggolan has returned to Sardinia, five years after he left the club for Roma. Cagliari also added Napoli’s Croatian Marko Rog, Club Nacional’s Christian Oliva and Boca Juniors’ Nahitan Nández to their midfield department. At the back, Swedish international Robin Olsen was signed from Roma as the club’s new goalkeeper, while former Chievo defender Fabrizio Cacciatore and new Juventus left-back Luca Pellegrini strengthened the defence (Pellegrini on loan). Upfront, Giovanni Simeone joined on loan from Fiorentina. This transfer activity provided head coach Rolando Maran with a very good squad.

As mentioned above, Cagliari’s head coach is former Chievo coach Rolando Maran. His preference is to set up in a 4-3-1-2, but he is not afraid to deviate away from that system, especially when defending. As we will now see, Maran has created a very flexible defensive system with Cagliari.

When defending in a high-to-mid block, Cagliari use a 4-3-1-2 where the basic orientation is positional. This changes into more of a man-orientated approach when pressing very high, which they only do on specific occasions such as the opponent working the ball backwards and eventually ending up at their goalkeeper. We can see their midfield diamond below.

When defending deeper into their own half, however, Cagliari’s shape changes into a 4-4-2 with the attacking midfielder dropping in next to the defensive midfielder. In the image below, that means Nainggolan drops in next to Cigarini with Nández and Rog functioning as quite narrow wide-midfielders. 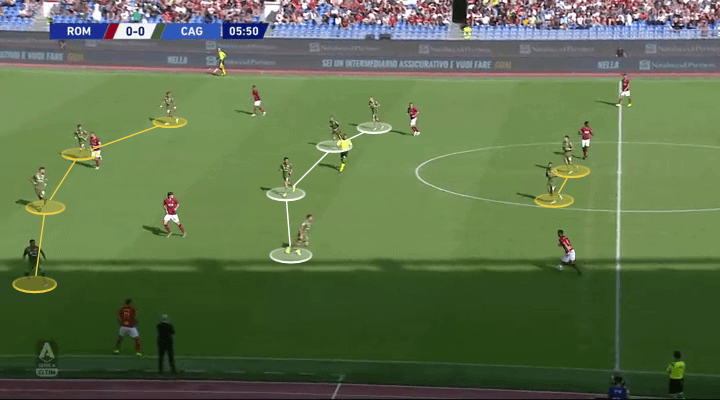 One aspect of Cagliari’s defending that doesn’t change, regardless of the shape, is their aim of keeping the ball on the outside of their defensive structure. As such, the midfield is narrow to prevent passes being made through the lines of the team, while the full-backs are positioned slightly wider to maintain access to the wide areas when the ball inevitably ends up there. Therefore, when the ball enters the wide areas, we often see the full-back sprinting out to press while the wide-midfielder provides cover on the inside. We can see the narrow nature of the midfield in the image below. 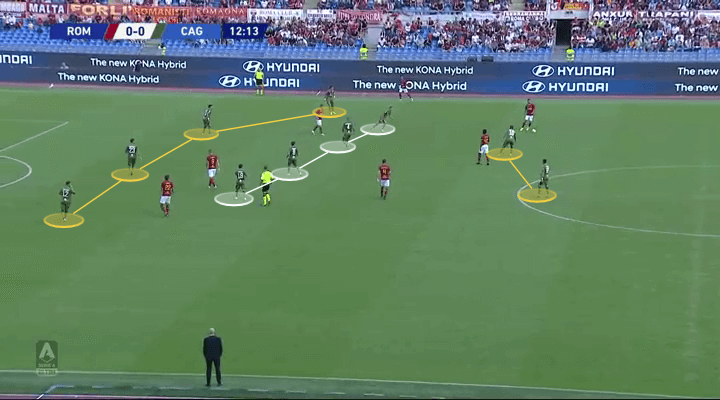 What the above image also illustrates is Cagliari’s determination to keep a compact shape that is difficult to play through. As you can see, the team is very compact both horizontally and vertically which normally makes them very difficult to breakthrough.

However, gaps still appear. Sometimes, before the attacking midfielder has had time to drop in next to the defensive midfielder to create the 4-4-2, Cagliari struggle to close spaces in midfield since the two wide central midfielders are caught in too wide positions, leaving the centre exposed with only the defensive midfielder covering the central areas. This happened in the below situation against Napoli. As Rog closes down Allan, the Brazilian finds Insigne in a great position behind the Croatian. Neither Nández nor Oliva has a chance to stop the Italian who can receive and progress the ball. 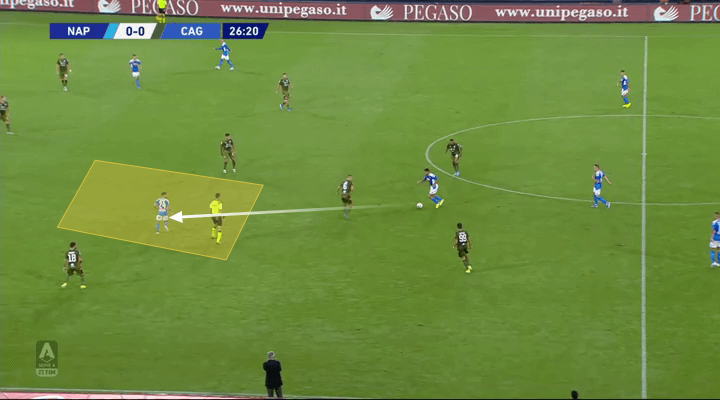 Despite Cagliari’s most impressive defensive shape, they have conceded the fourth most shots against in the Serie A. Thankfully, Olsen has been superb in goal, but they need to shore up further if they are not to start slipping down the table.

Going forward, Maran keeps the 4-3-1-2 and looks to progress the ball forward quickly. Their attacks often start with the full-backs pushing on slightly and the defensive midfielder, Cigarini (white) in the image below, dropping deep to initiate attacks. As you can see below, the wide central midfielders (black) position themselves higher to provide vertical passing angles for Cigarini. 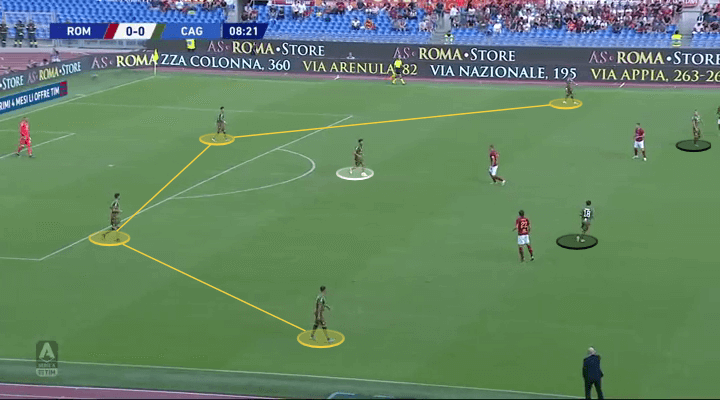 Cigarini is excellent at one of Cagliari’s preferred pass-types, which is when he receives from the right and sends the ball forward instantly with his first touch. Often, he looks to access the space behind the defence for a striker to run into. On other occasions, he looks to find a striker’s body to progress beyond the opponent’s midfield line or, as below, he spots a run being made by a midfielder. These passes often appear to be made by default, so this is clearly something Cagliari are working on. 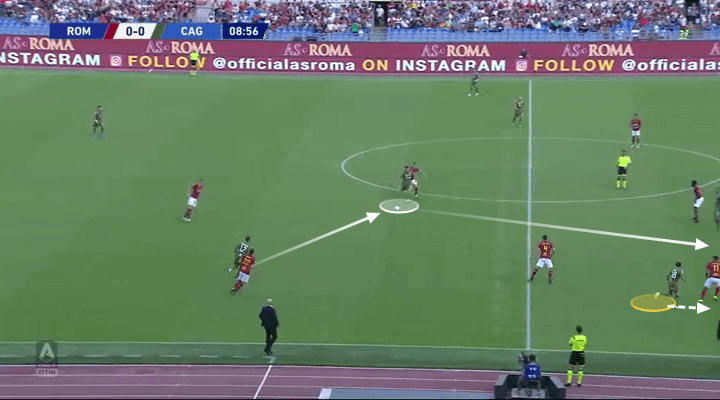 In the image above we saw a midfielder making a run into space, and this is another trademark of this Cagliari team as their midfielders are always willing to break beyond the opponent’s defensive line. In the image below, Cigarini spots the run being made by Nainggolan and plays a first-time pass into the Belgian. Such runs are difficult to pick up by the opposition and should eventually lead to a few goals for the Sardinians. 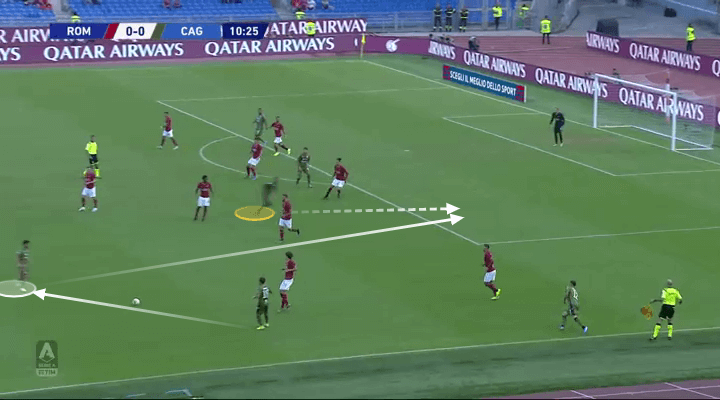 If Cagliari can’t get the ball into Cigarini in the first phase, they often decide to go long to one of the strikers. In the image below, we see one such occasion as Olsen’s long ball is sent to Simeone. Crucially, the willingness to run from Cagliari’s midfielders comes in handy since they often provide a good passing option for the forwards to lay the ball off to. Therefore, Cagliari can often bypass the opponent’s midfield rather easily. 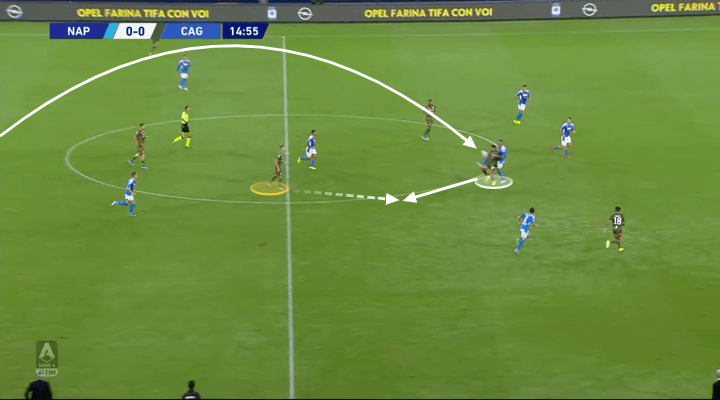 The strikers are also willing to run in behind a defence, which allows Cagliari to often access the space behind the opponent’s defence with lofted passes from deeper areas. In the image below, Pellegrini plays Simeone through on goal after Hellas Verona give up plenty of space. 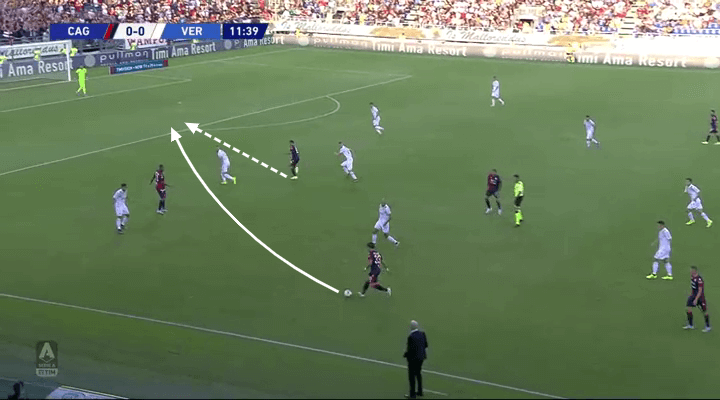 The preferred method of chance creation is crossing, often after Cagliari have overloaded the central areas and switched the ball wide. Then, they attack the box with plenty of players, as seen in the image below when five players are ready to attack the cross. 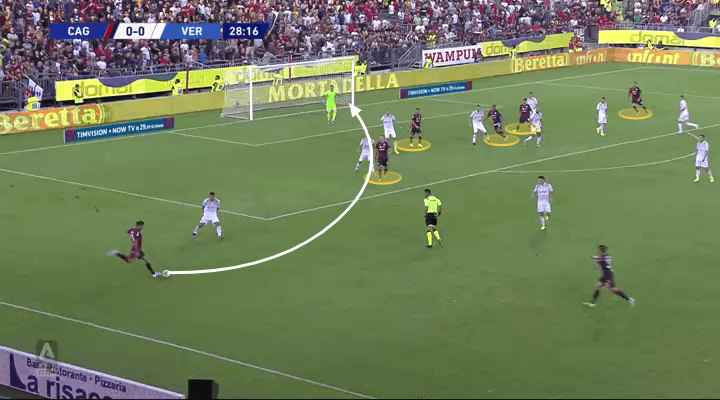 Despite some promising ideas in attack, Cagliari average the fewest shots in Serie A overall (9.7) and also the fewest shots on target (2.9). It is still early in the season so this could be a case of a bunch of new players taking time to adapt to the coach’s ideas, but it is very worrying since Cagliari aren’t likely to outperform the statistics all season.

As mentioned, the downside of Cagliari’s impressive start to the season is the statistics behind their performances. They average the fourth-lowest possession in the league at 44.6%, which in itself is no problem but if they are to challenge in the top half of the league then they need to keep the ball better. Better possession would probably lead to more shots, which is crucial since they average the fewest shots in the league. Additionally, neither of their forwards are known to be prolific throughout a season, and it seems unreasonable to expect them to rely on their set-piece goals to continue.

Defensively, Cagliari average the fourth-highest shots conceded per game (16.4), which is worrying for a team currently in the top seven. In fact, Cagliari have had a lower xG than the opponent in every game this season bar the opening loss against Brescia. Indeed, xG has them bottom of the league, yet they are seventh.

Is this sustainable? It is true that Olsen has been fantastic, especially at Napoli and Roma, and it seems unlikely Cagliari would have got anything out of those games without him in such good form, but we should also remember that they signed a lot of new players and that these are still settling in. It seems as though their performances might not have warranted the points tally they have, but there have still been enough positive signs for Cagliari to remain hopeful they can finish in the top half.

As this analysis has shown, Cagliari are a well-organised team that have surprised so far this season. However, statistics suggest that they have not really been the league’s seventh-best side. The sample size is still small, but Cagliari’s continued, or disrupted, success is something to keep an eye on for the rest of the season.