Bournemouth have played a 4-4-2 (or variations of it such as 4-4-1-1 and 4-2-3-1) virtually all season and analysis of their style of play reinforces what the xG metrics tell us, Bournemouth aren’t a great attacking side. In this tactical analysis, I will explain what is going wrong at Bournemouth both offensively and defensively, and seek to find some solutions of how these problems within their tactics can be solved.

A bad habit teams playing within a 4-4-2 can fall into is consistently playing down the lines in order to advance up the pitch. This involves the simple build-up pattern of playing from centre back to full-back, and down the line to the winger. This a particularly poor way to progress the ball, as it revolves around straight passes being received with the receiver facing their own goal. This gives little options for the player in possession, who also has the added difficulty of pressure from behind or from the opposition full-back.

This isn’t the cleanest way to progress the ball, but if you have players who are talented with their back to goal then some success can be found, with forward movements from the midfield. However, if possible, a cleaner method of progression is through diagonal passes into the centre, as the player receives at a better body orientation (forwards) and can therefore receive the ball easier., as we can see below. There are also more options available from this central position, as the options of directly forwards, left and right are available compared to just inside and backward for the winger. 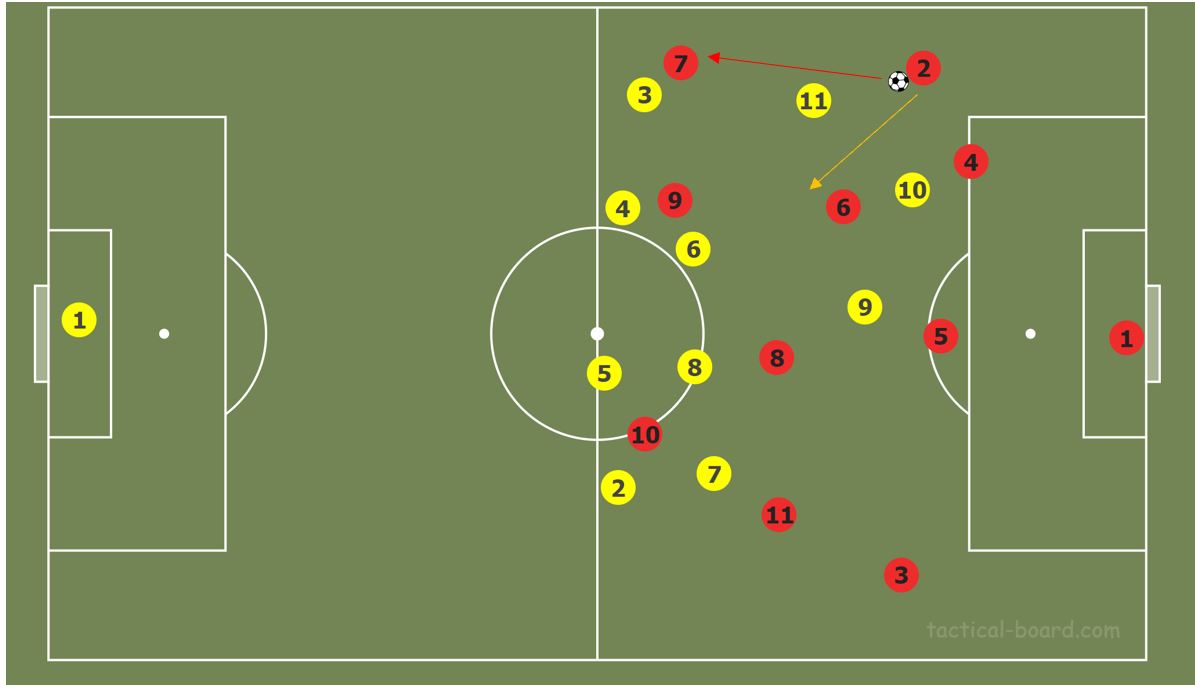 The below examples illustrate in deep areas Bournemouth’s struggles in this regard. Here the full-back receives from the centre back and looks to progress play. The central midfielder doesn’t particularly offer himself to receive, and the full-back is determined to play the ball down the line. The full-back is pressed well and the passing lane down the wing is cut off fairly easily (another disadvantage), and as a result, Bournemouth lose the ball deep in their own half. 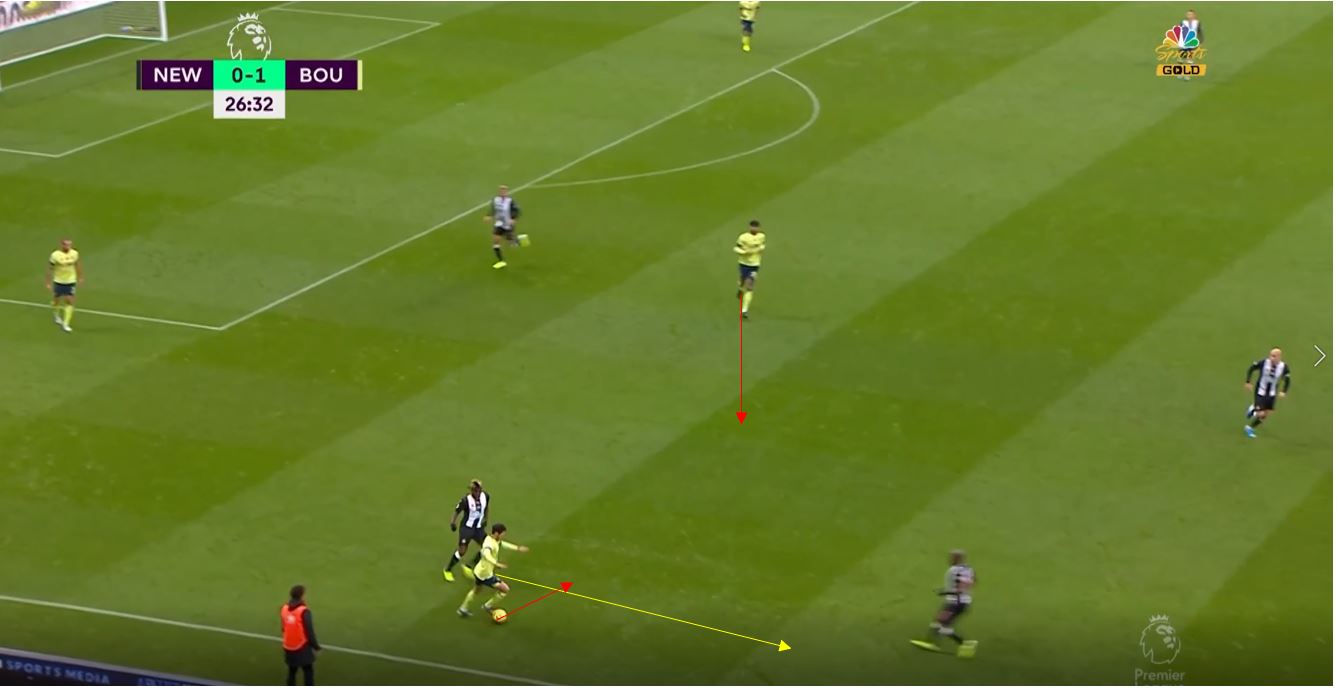 Here again, the full-back receives in a deep area. The central midfielder again doesn’t show for the pass inside despite it being available and the advantages of receiving in this area, and Bournemouth go down the line.

The winger (Harry Wilson) receives while being pressured from behind, not something many players in the Bournemouth squad are skilled at, and a heavy touch sees Bournemouth lose the ball and therefore not progress. The central midfielder is again in and around the area and should maybe be a yard higher to receive from the left-footed Wilson, but Bournemouth can’t play the pass due to the poor ability to receive with pressure from behind.

In one final example here we see the same situation again, where Bournemouth again lose the ball. The full-back opts to progress the ball down the line despite a central midfielder being in a position to receive. The central midfielder has immediate options in the middle to receive the ball and space to switch play into, but instead, Bournemouth settle for a throw-in a yard further up the pitch. 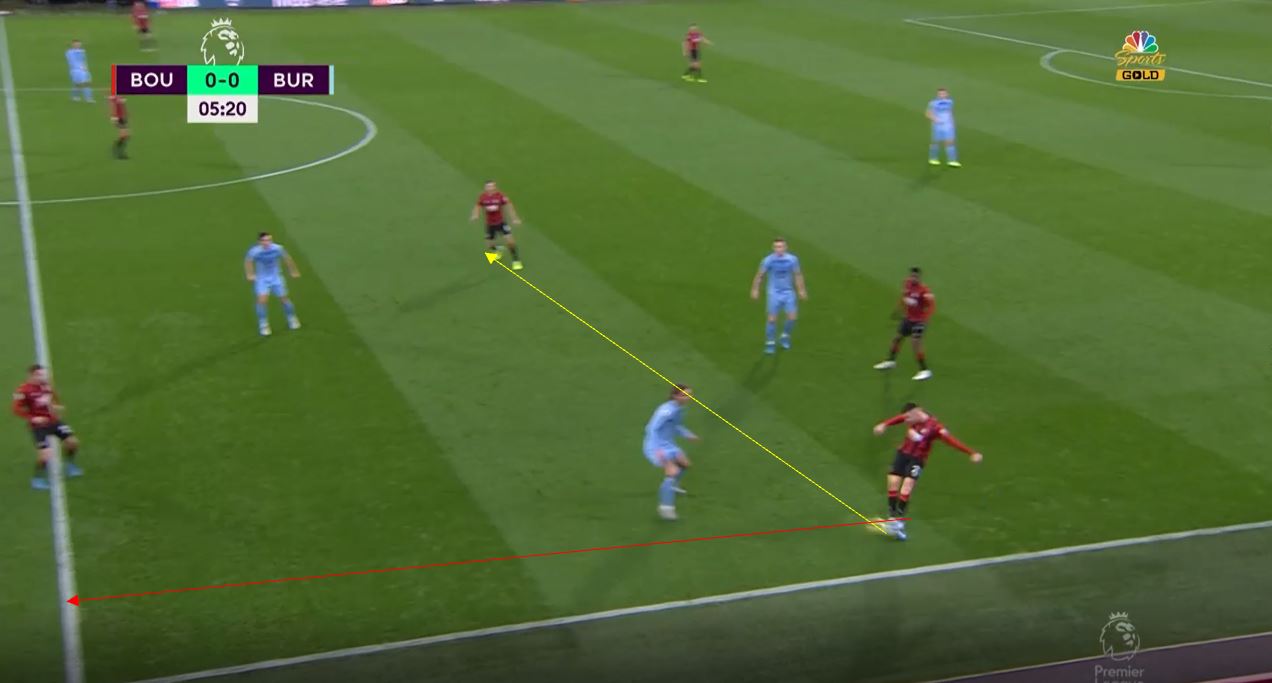 Poor positional play and use of the half-space

Bournemouth’s offensive movement and structure also hinders their offensive output as we can see in the next examples below. Bournemouth struggle again to get into those central areas via the half-space, and as a result rely on contested crosses from their full-backs often, which are rarely successful.

We can see an example of this below, where the full-back receives in an advanced position. In order to progress forward effectively, the use of the half-space or a pass down the line would be effective. Ryan Fraser, occupies the half-space, but because he is playing as the winger, Bournemouth have little width and the size of the half-space is decreased. To increase it, Fraser should make a run wide to provide width and draw out the widest presser from Newcastle. Josh King, who is currently too far from Fraser, should move into the half-space, with the passing lane into him made larger by Fraser’s movement wide. From there Bournemouth can progress with options on the Newcastle backline.

This sequence of play also demonstrates this. Here the full-back has the ball and again, there is no width provided by the winger, and as a result the pass inside can’t be utilised. 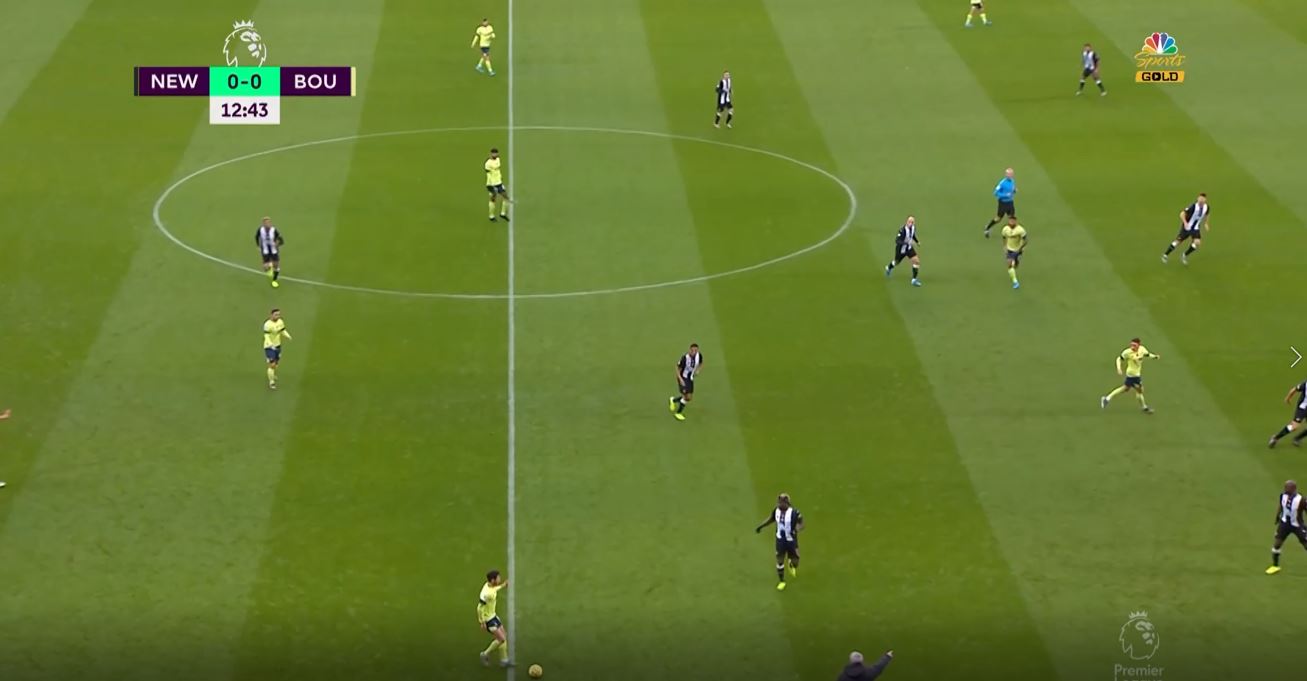 Wilson then drops wider and the central midfielder closer to the full-back, which increases the size of the passing lane inside. Bournemouth play the ball inside and are able to progress. 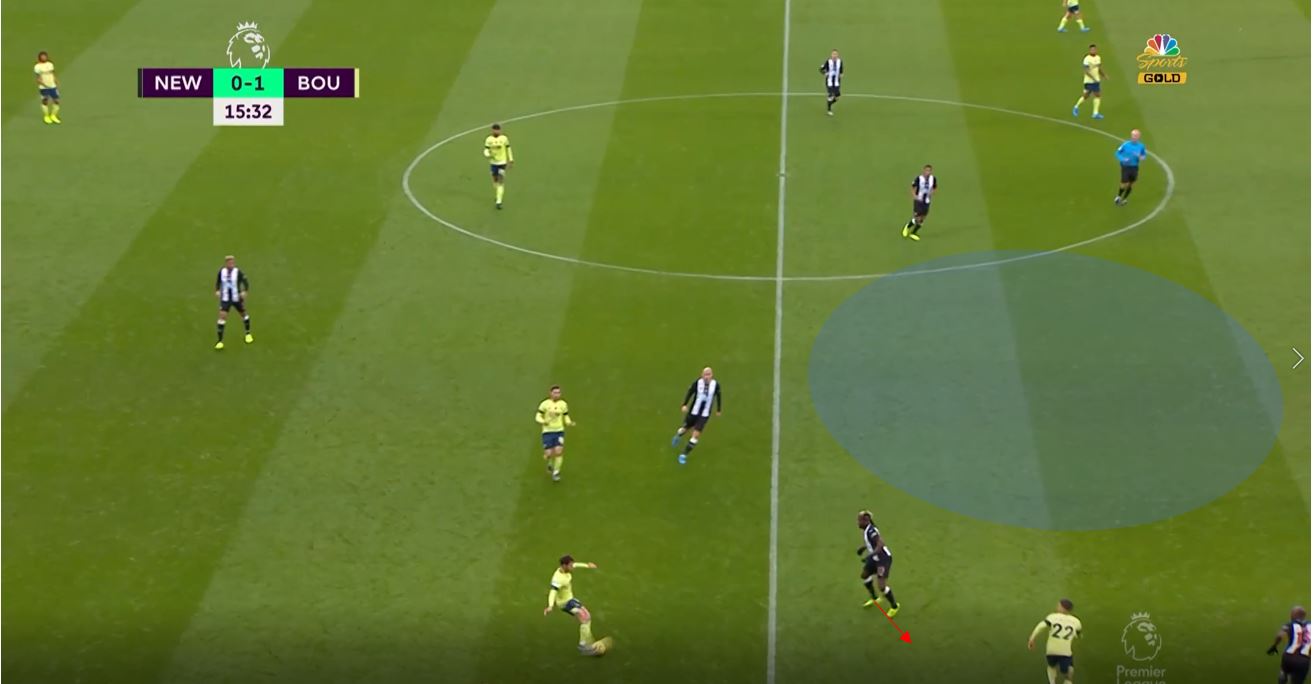 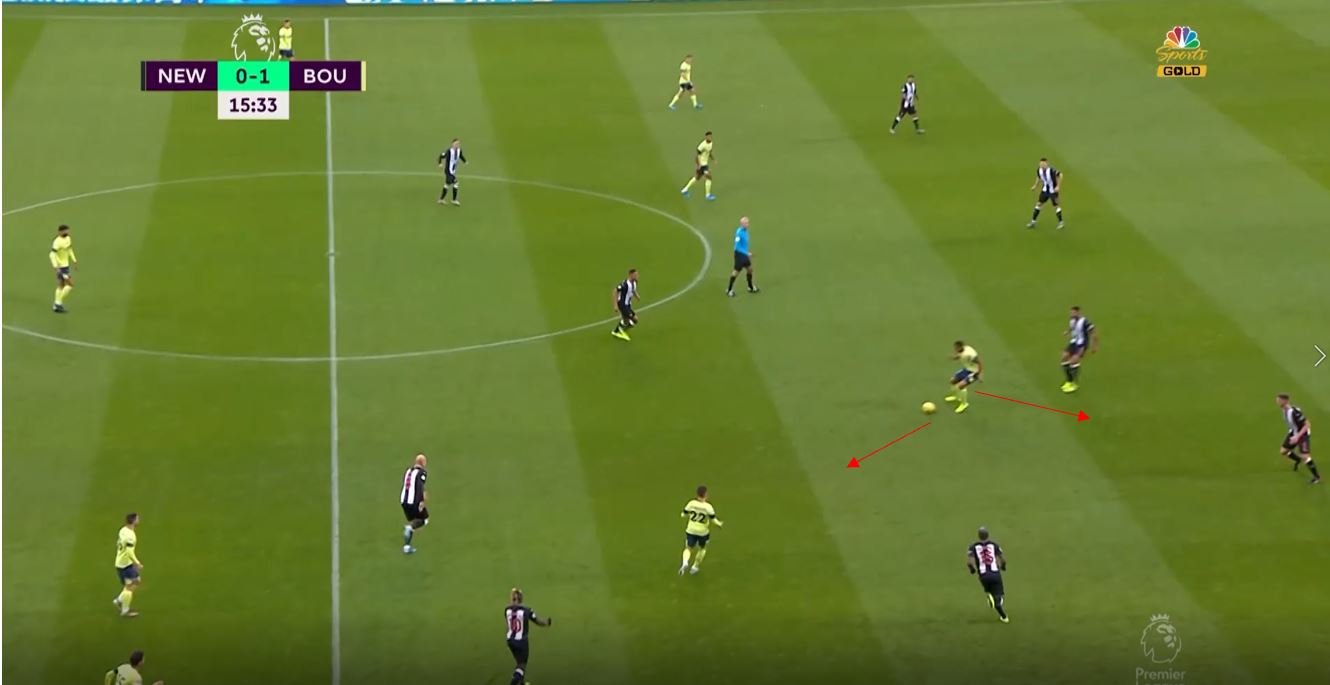 We can the same principle here again, with this time the full-back and winger providing width, but no player dropping into the space created in order to receive. This, much like their deeper build-up play, leads to them getting stuck on the wings and unable to get near the goal to create chances, hence the low xG. 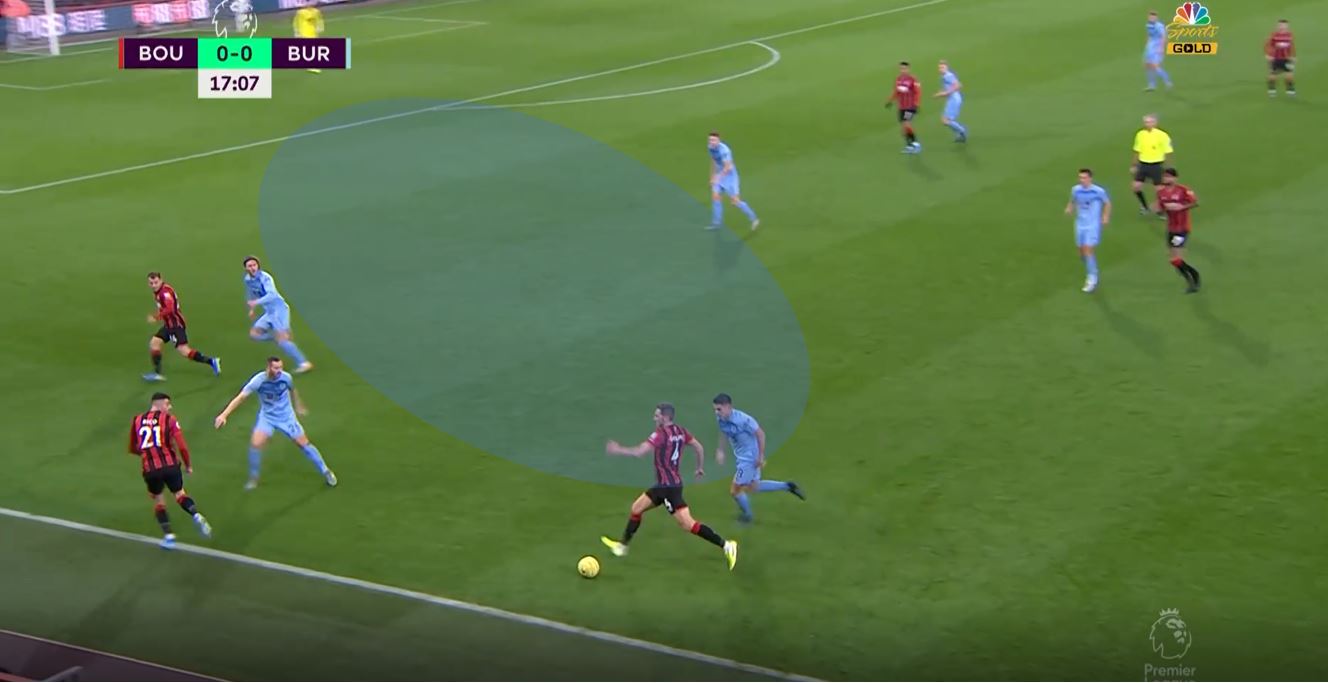 There are also a few examples of the correct movements being made, but not being recognised by the player on the ball with this being one of them below. The space is available inside for a diagonal ball to be played but poor touches and slow speed of execution sees the space close quickly, and Bournemouth get stuck out wide.

Bournemouth’s 4-4-2 also doesn’t involve many players occupying the backline, and so again they rely on forward movements and runs from players in deeper areas. Therefore, the ball has to be held up and intelligent runs have to be made, but with Bournemouth fairly poor at receiving with pressure from behind, they are not often successful from this approach. One of the best teams in the world at this skill are Borussia Mönchengladbach, who when in a 4-4-2 diamond use their two strong strikers Marcus Thuram and Alassane Pléa. In situations like the one below, Bournemouth’s strikers are unable to hold the ball up long enough, and their midfield runs aren’t precise enough to cause harm to the opposition.

Here is an example of some good play from Bournemouth, showing how to combine with the front two in order to progress. The midfield provides support for the ball to be laid off and a forward third man run from the winger is made into space, and Bournemouth get in behind the opposition. However, again, Bournemouth just haven’t possessed the quality in order to exploit situations like the one below. They have the second-worst record in crossing accuracy this season with only 25% accuracy, and the third-worst record in the league for 1v1 dribbling, with only a 47.3% success rate. 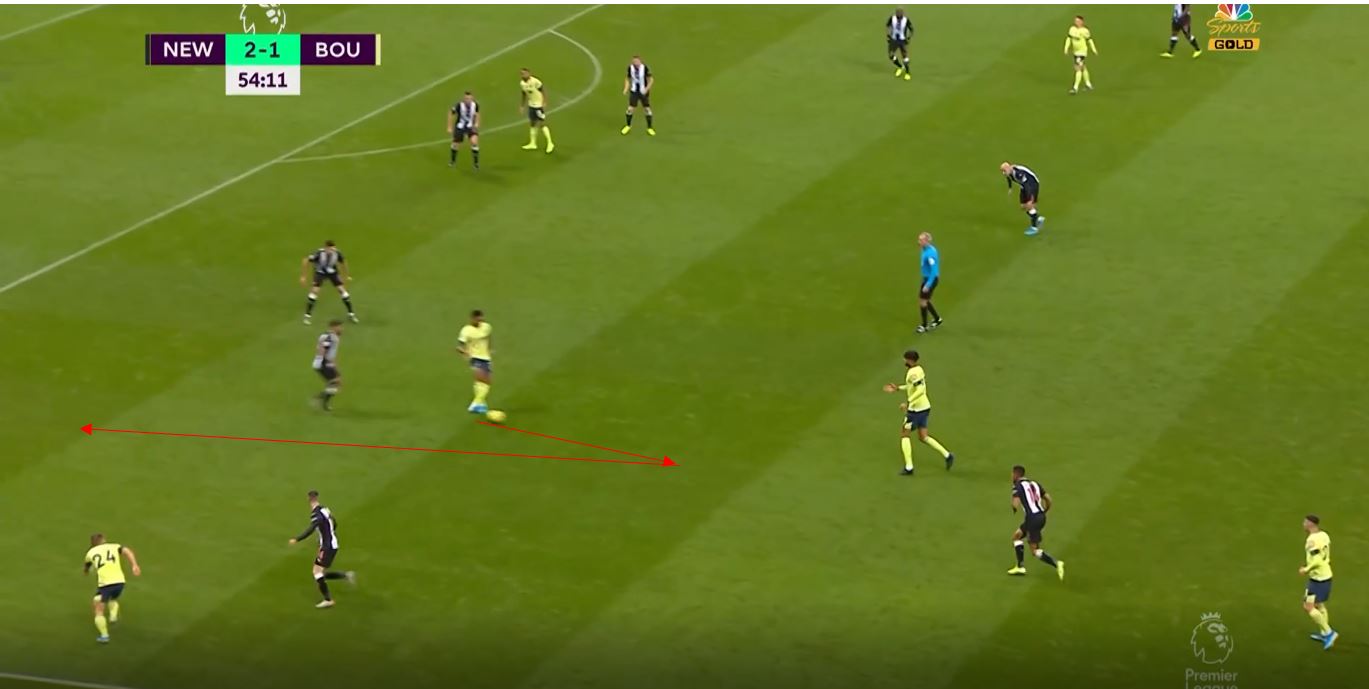 Bournemouth have conceded many goals this season as a result of their poor offside line and the movement and body positioning of their backline. The subject of body and feet positioning and how to coach the offside line is one I have recently completed an article on which will be available in the TFA January magazine, and this next example is a typical example of poor defending in an offside trap.

Notice the differences in the body and feet positioning of the two Bournemouth defenders. Steve Cook allows for Joelinton to continue running, and faces almost flat, which reduces the depth of the offside line and makes it more likely the attacker is caught offside. Nathan Aké meanwhile makes the common mistake of doing the opposite, and leaning in the direction of the attacker hence increasing the depth of the offside line and playing Joelinton onside. Bournemouth don’t concede from this example, but nevertheless it is a good example of some of the problems in their defensive line.

Below is another example and one which was pointed reinforced by Rafael Benítez recently. At this point, the run in behind is already being made by Oxlade Chamberlain. The centre back then has to effectively turn as quick as possible and recover, but begins by jogging backwards. This wastes valuable seconds for the defender, and Oxlade Chamberlain is able to get in behind and score. Teams seem to be looking to exploit this weakness of Bournemouth, with Tottenham also scoring with a simple high ball over the top.

As this scout report shows, Bournemouth are in trouble and it will be interesting to see if they use the transfer window in order to strengthen their survival bid. Howe faces a difficult period where he has to make some decisions around his system and ultimately, has some coaching to do in order to improve the players within the system and the system as a whole. All in all, to stay up, their xG metric and more importantly their actual goals statistic needs to improve. 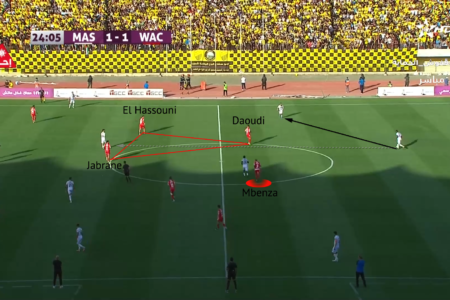