Before we show you Connor’s solution, let’s remind ourselves of the challenge he was posed.

This summer is the inaugural Continental Cup. Each of the six FIFA governing bodies will be competing against each other.

The inaugural Continental Cup then. I have been tasked with managing CAF in the tournament and our first match is against CONCACAF. I’m fairly confident, there are many incredibly talented footballers that hail from Africa. I have selected my team with a clear tactical plan in mind and as such, I have called up players that have experience playing in similar tactics at club level. In this tactical analysis, I will explain how I plan on winning my first game versus CONCACAF.

Our scouts have produced an analysis of CONCACAF and have identified that CONCACAF will play a 3-4-3. We are also aware that CONCACAF are an attack-minded team, who look to push their wing-backs Jesús Corona and Alphonso Davies up high on the overlap. Inside forwards Hirving Lozano and Christian Pulisic tuck infield to support lone striker Raul Jiménez of Wolves. American Michael Bradley steps out of the back three to assist with the build-up.

To combat CONCACAF’s attacking system, we are going to fight fire with fire. Our system is a 3-4-2-1. At the very back, we have Ajax goalkeeper André Onana. Napoli centre-back Kalidou Kouibaly is flanked by Wolves’ Romain Saïss and Borussia Monchengladbach’s Ramy Bensebaini. We are also going with two attack-minded wing-backs with Moroccan duo Hakim Ziyech and Achraf Hakimi. We are deploying combative midfielders, Idrissa Gueye, of Paris Saint-Germain (PSG) and Naby Keïta in the centre of the park with the main aim of breaking up play and getting us on the front foot. Another two Liverpool players in Mohamed Salah and Sadio Mané play as dual number 10’s in behind a possible surprise inclusion, Patson Daka. The Zambian has been in great form for Salzburg this season. His pace and smart movement will be key to our success. With three Senaegelese players in our team, it’s clear that Senegal manager Aliou Cissé has been doing great things with the national team. 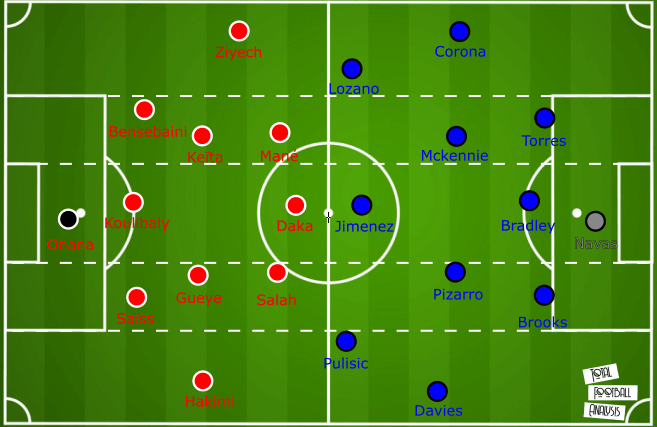 Out of possession and defence to attack transitions

We are going to adopt a mid-block defensive set-up, allowing CONCACAF’s centre-backs to have possession of the ball in their own half. As soon as they play into our half, we will instigate an energetic high press in an attempt to regain possession with CONCACAF’s high backline exposing space in behind that one of our lightning quick front three can benefit from. We can see an example of this below. 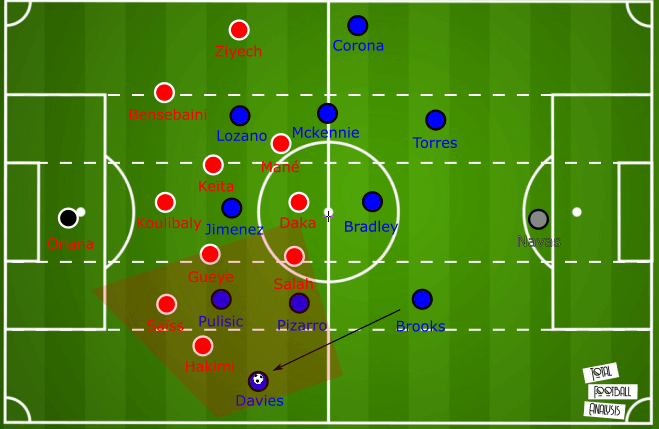 John Brooks plays a ball out wide to Davies and immediately we are able to outnumber the CONCACAF team with Hakimi, Saïss, Gueye and Salah all within the vicinity to close down passing options, block passing lanes and force CONCACAF backwards. Due to our 3-4-2-1 formation, we form a square in the middle of the pitch that makes it incredibly hard for CONCACAF to play through the middle to Jiménez. 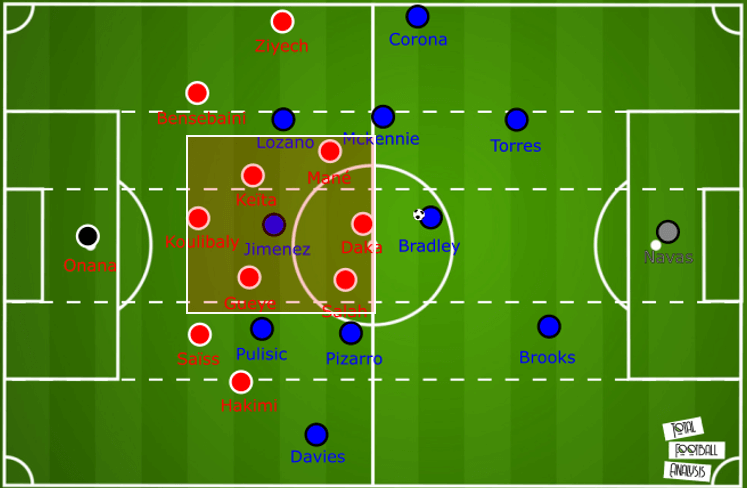 As you can see from the image above. Our plan is to prevent CONCACAF playing through the middle, due to our numerical superiority, Jiménez is surrounded by a minimum of four players and the presence of Daka blocking passing lanes with his intelligent positioning and pressing and Koulibaly leading the backline in holding  a high line. CONCACAF’s only options are to play wide or into the half-space. In which case we are able to slide our team over in order to have numerical superiority in that area also.

For this to be successful we need to be able to apply intelligent pressure to prevent Davies and Corona being able to switch play. 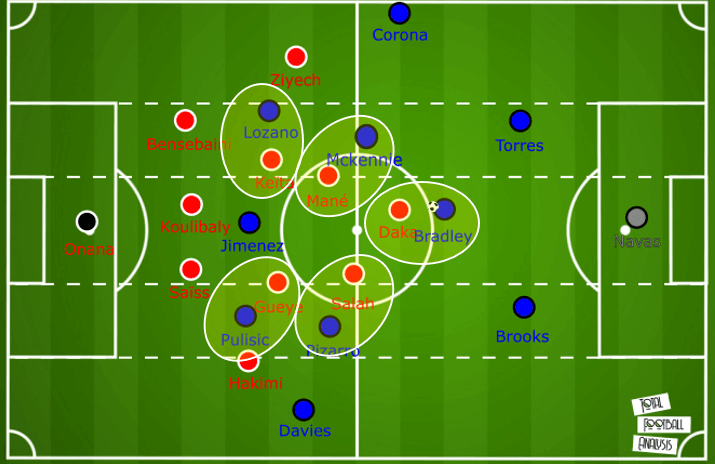 The bonus of playing Mané and Salah as number 10’s is that it allows us to go ‘5v5’ in the middle when Bradley steps up to assist in build-up, which is what the image above shows. This combined with the isolation of Jiménez makes play predictable. The only option that CONCACAF have that is without risk is to play the ball wide, which we can overload, as previously discussed. If CONCACAF decide to try the riskier approach of playing through the middle; it plays into our game plan of beating them in transitions with counter-attacks when we regain possession. This is mainly due to the extremely attacking approach adopted by CONCACAF. This leads us to the next section of our tactics.

In possession and attack to defence transitions

As we have already discussed how we plan to thwart CONCACAF’s attacking play. When we are In possession we are looking exploit the half-space. With the plan to utilise passing triangles between the wing-back, inside forward and centre-midfielder. We will look to play in behind the opposition wing-back in order to get behind the defensive line and create scoring chances. We can see an example of this below. 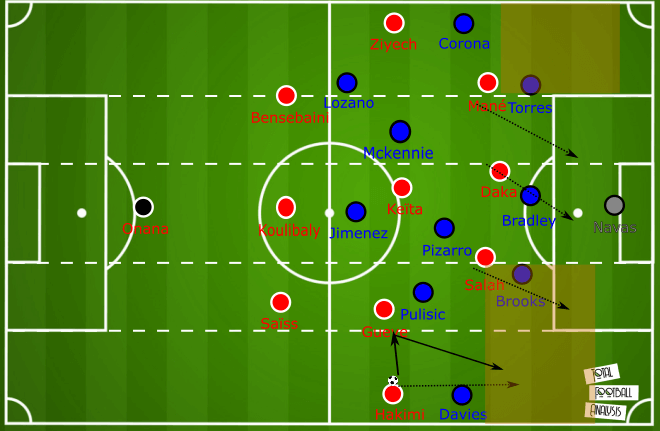 As we can see above. The tactical plan is to isolate the wing-backs as much as we can. Hakimi draws out Davies and combines with Gueye, who then looks to play in behind for Salah or Hakimi to run onto.

In general build-up play, either Keïta or Gueye will assist by dropping in as a false full-back to create a temporary back four. This move will allow Hakimi and Ziyech to push higher up and hopefully pin CONCACAF’s wing-backs into a defensive position.

When building through the thirds, we will use positional rotation and fluidity to take full advantage of space in between the lines. Daka will drop deep in order to drag CONCACAF’s defenders out of position. Salah and Mané will constantly be looking to make out-in runs in behind the defensive line. 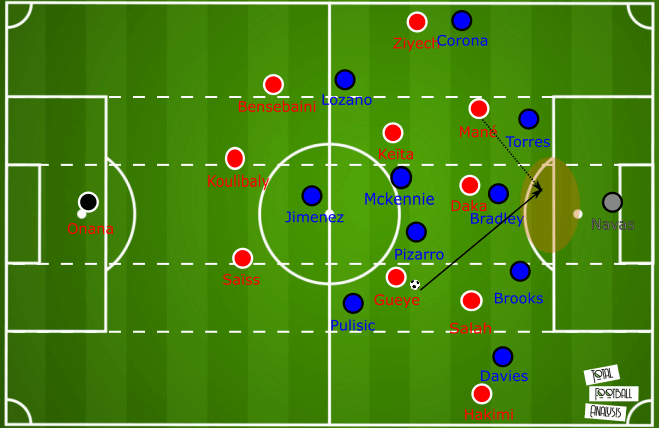 In this example, we can see that Daka has dropped deep, which has pulled Bradley out of the defensive line, which has left space in behind for Mané to run onto.

When transitioning from attack to defence, we plan to counter-press initially for the first six seconds after we lose the ball to catch CONCACAF off guard and profit from an intense press. The press will be led by the front three, whilst Hakimi and Ziyech will look to man-mark their opposite numbers. Gueye and Keïta will be tasked with blocking passing lanes in midfield with the hope of forcing a quick turnover. 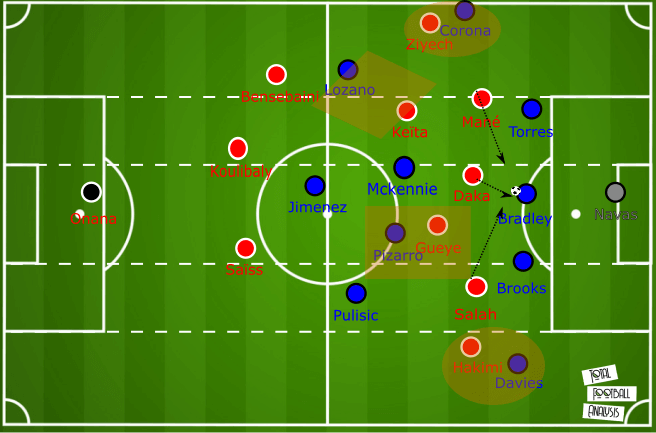 As mentioned above, here we see the front three engage in an aggressive press after we have lost the ball. Hakimi and Ziyech mark their opposites and Keïta and Gueye block passing lane as we try to force CONCACAF into mistakes or alternatively go long, where one of our back three are able to attack the ball, hopefully winning the aerial duel and we can regain possession and build our attack in a controlled manner.

If the press fails, we drop into our out of possession shape where we adopt a mid-block and look to restrict CONCACAF playing through the middle.

An interesting tactic wars conundrum to solve. I feel like the middle is where this game will be won or lost, hence my tactics to restrict CONCACAF’s influence in the middle of the park. By lining up in a similar fashion to CONCACAF’s, I am hoping that we win more 1v1 duels than my opposition. Therefore, challenging my players to win their individual battles, which will be a key aspect of the match.

In this tactical analysis, we have provided a solution to the tactic wars scenario. Going toe-to-toe with CONCACAF may be a risky idea but one that I feel I have selected well for and that we have a great chance to start our Continental Cup campaign with a win. 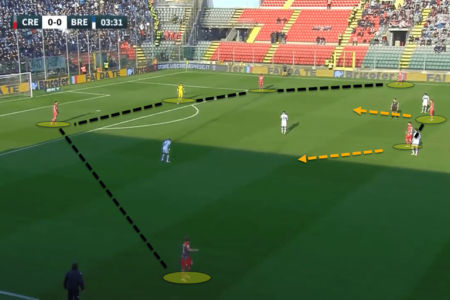 One could easily make the case that Serie B is the most competitive league in Europe right now. Just ten […] 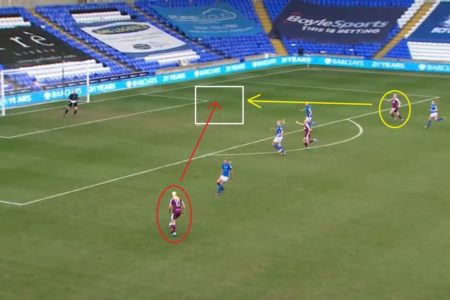 West Ham United Women have gone under the radar this season, quietly getting on with business and trying to finish […]