Before we show you Ty’s solution, let’s remind ourselves of the challenge he was posed.

The Premier League has finally decided to listen to @RomeluLukaku9’s request to play a North vs South All-Star match. The FA appointed Brendan Rodgers as the coach for Team North.

*Please read the disclaimer at the bottom of the tread before being upset about our N/S divide.

The Premier League has organised a North vs South all-star match, with Leicester boss Brendan Rodgers appointed as boss of Team North. I’ve been chosen as the manager for team South. One could argue that team North has better players while going head to head vs a top manager serves to increase the challenge I face. Furthermore, I have to include at least one player from each of the ten clubs deemed to be in the South. 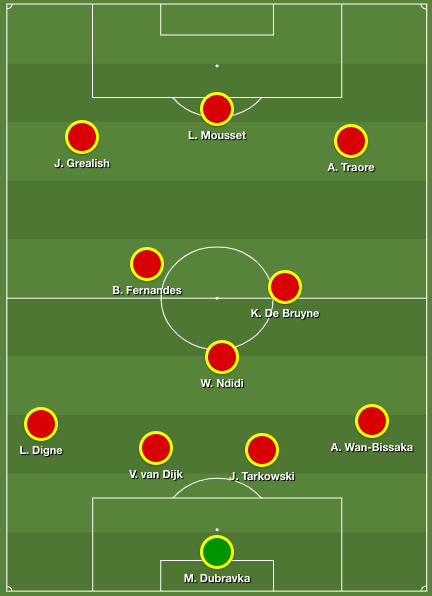 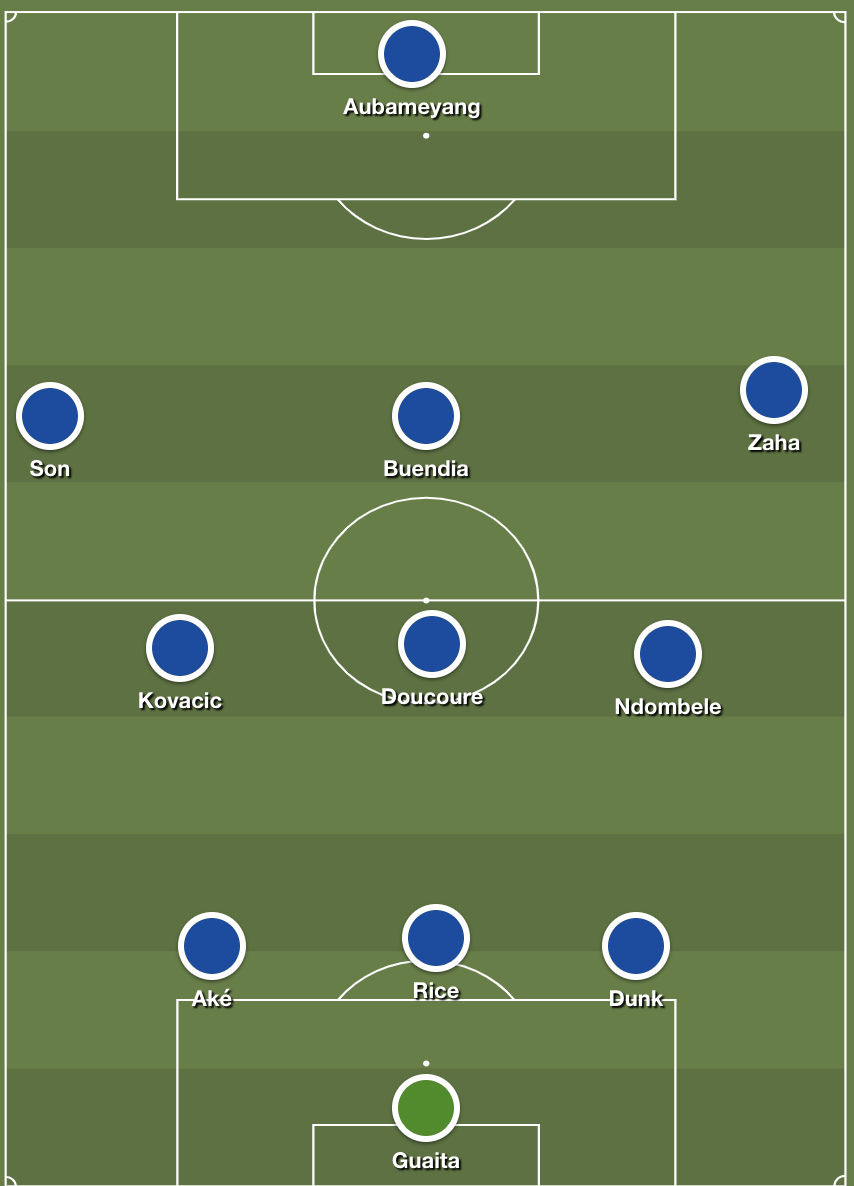 Now that we’ve seen the lineups, let’s take a look at the tactics I’ll be using against team North.

Before we take a look at my team’s defensive shape, we first need to identify team North’s biggest offensive threats, and how they are likely to attack. In their back four, Wan-Bissaka is less of a marauding fullback in comparison to Digne, though the Manchester United player is still very capable in offence. Due to Jack Grealish and Adama Traoré playing on the left and right wings respectively, we’re likely to see Lucas Digne overlapping as Grealish operates more centrally, while Aaron Wan-Bissaka supports Traoré, who will make space for Kevin de Bruyne to operate in an advanced position in the half-space. 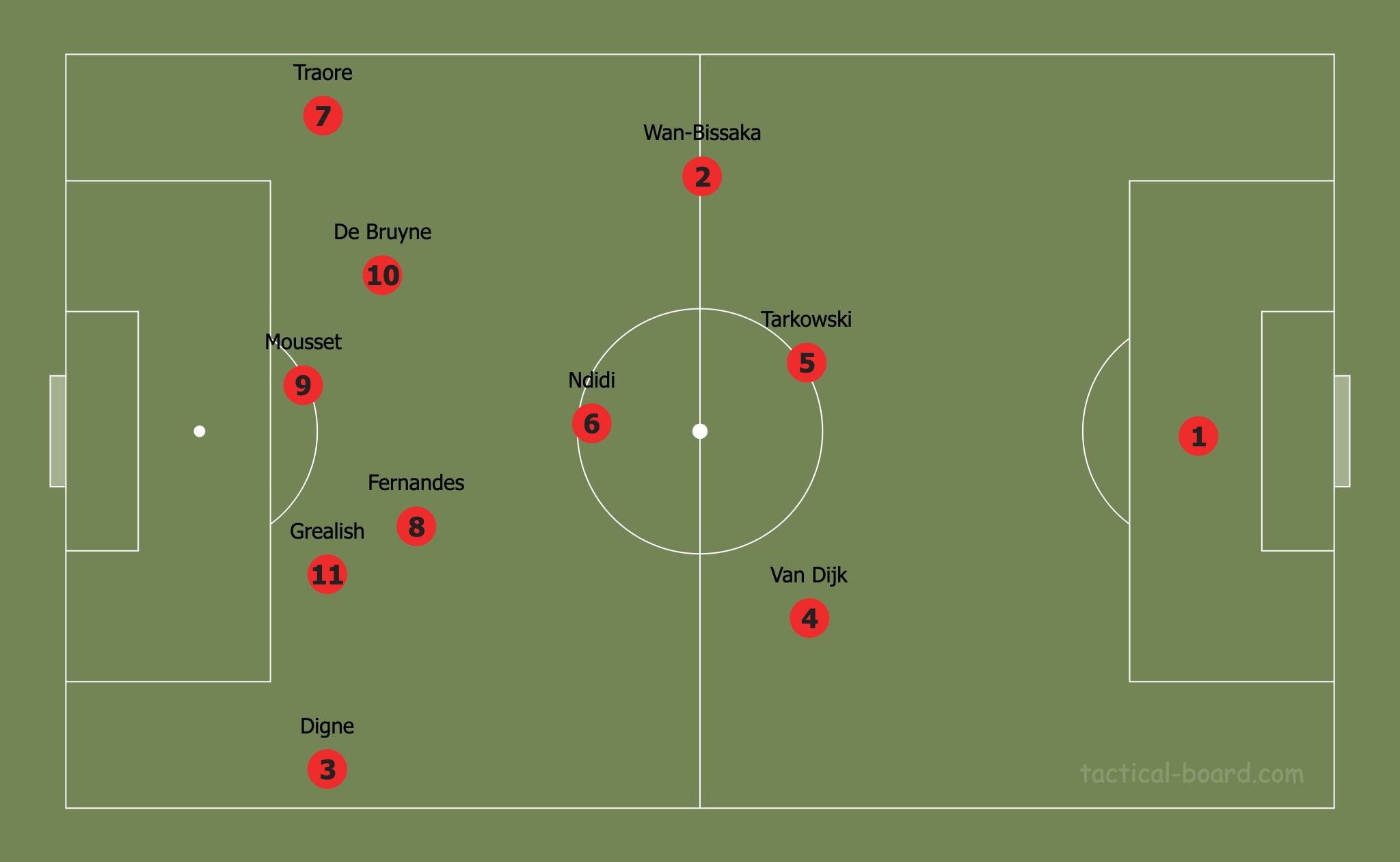 My team’s defensive shape will be a 3-1-5-1, which will look to crowd out the centre of the pitch and force the ball to the wide areas. 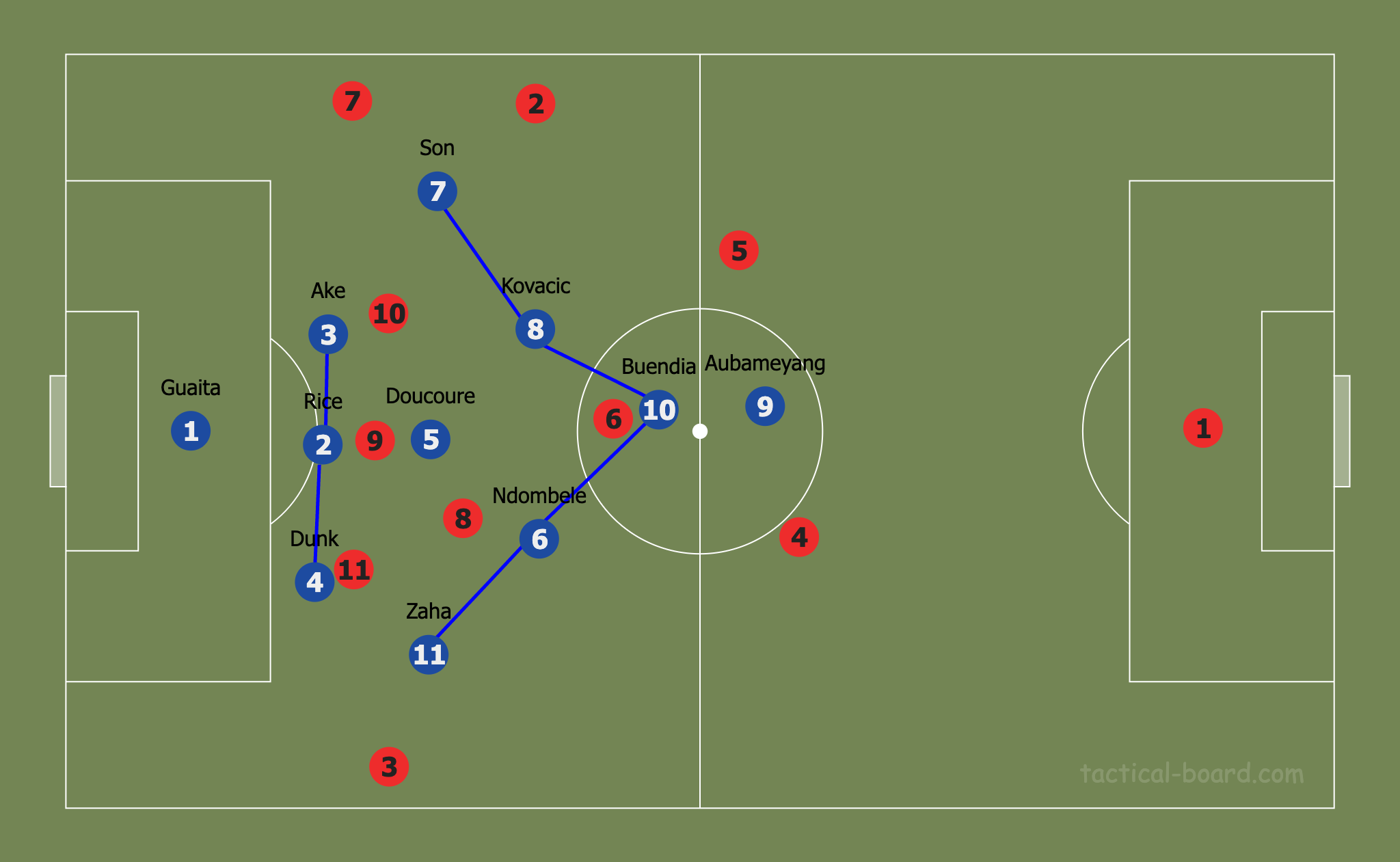 The back three will zonally mark their areas, with Abdoulaye Doucouré screening the defensive lone, while Tanguy Ndombélé and Mateo Kovačić cut out the passing lanes to De Bruyne and Bruno Fernandes. Emi Buendía will cut out the passing lanes to Wilfred Ndidi. Pierre-Emerick Aubameyang will step out to press the opposing centre backs in a manner which forces the opponent to play wide. 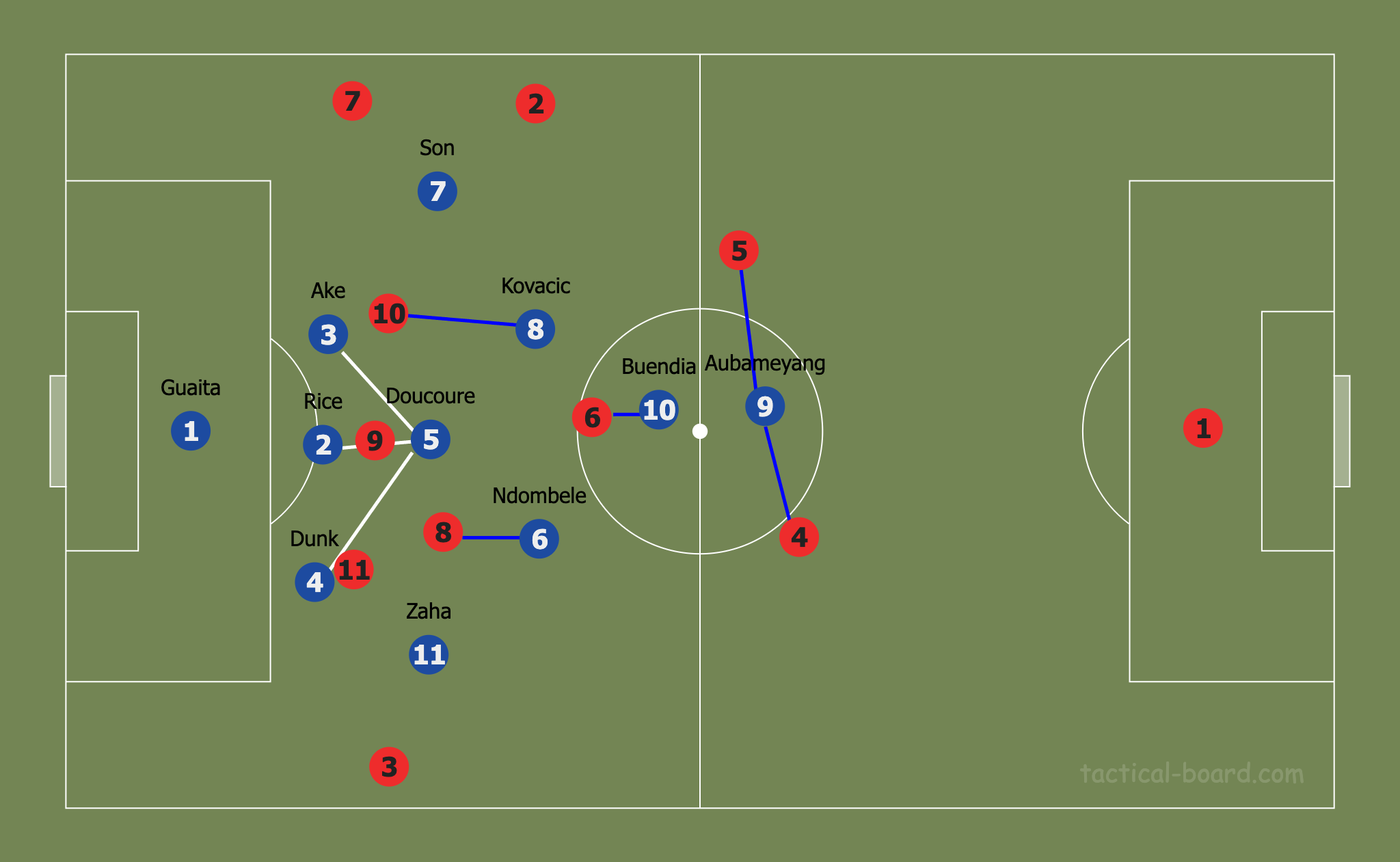 When the ball is played wide, Doucouré and the near sided winger will step out to press the opposing winger or full-back against the touchline, which will act as another defender. 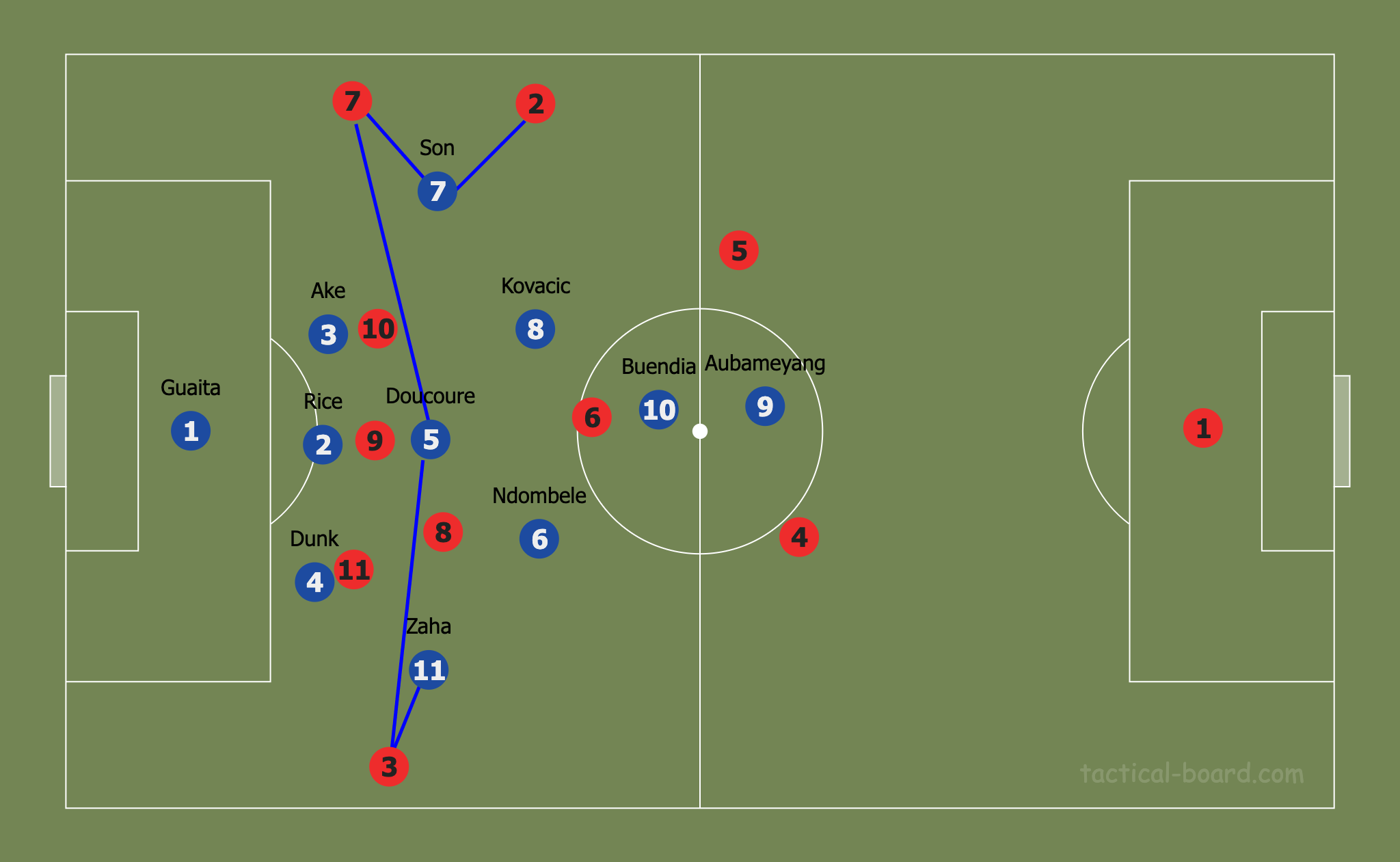 Although my team has the pace required to play on the break, due to the technical quality of my players they’ll regroup once they’ve won the ball and try to regain controlled possession of the ball and look to fashion changes with the same patterns as outlined in the offensive organisation. If team North counter-press and put us in dangerous positions, however, my team will look to exploit the likely high line of team North and play over the top.

Once we lose the ball, we will counter-press for two main reasons. The first of which being that we don’t want to allow team North to progress the ball while we are out of position, as they have dangerous technical players. The second reason is that, due to the overload of players my team has in the central areas, we can suffocate team North if they win the ball back in the centre, which is likely as it is the primary area of our ball progression. The players in the immediate vicinity of the Northern player with the ball will look to collapse in on him, while the players who are further away will look to cut out passing lanes so as to prevent an escape from the pressure and force a turnover or a long pass. In the below example, we can see Buendía, Doucouré, and Ndombélé apply pressure to the ball carrier while Kovačić and Wilfried Zaha cut out the available passing angles. 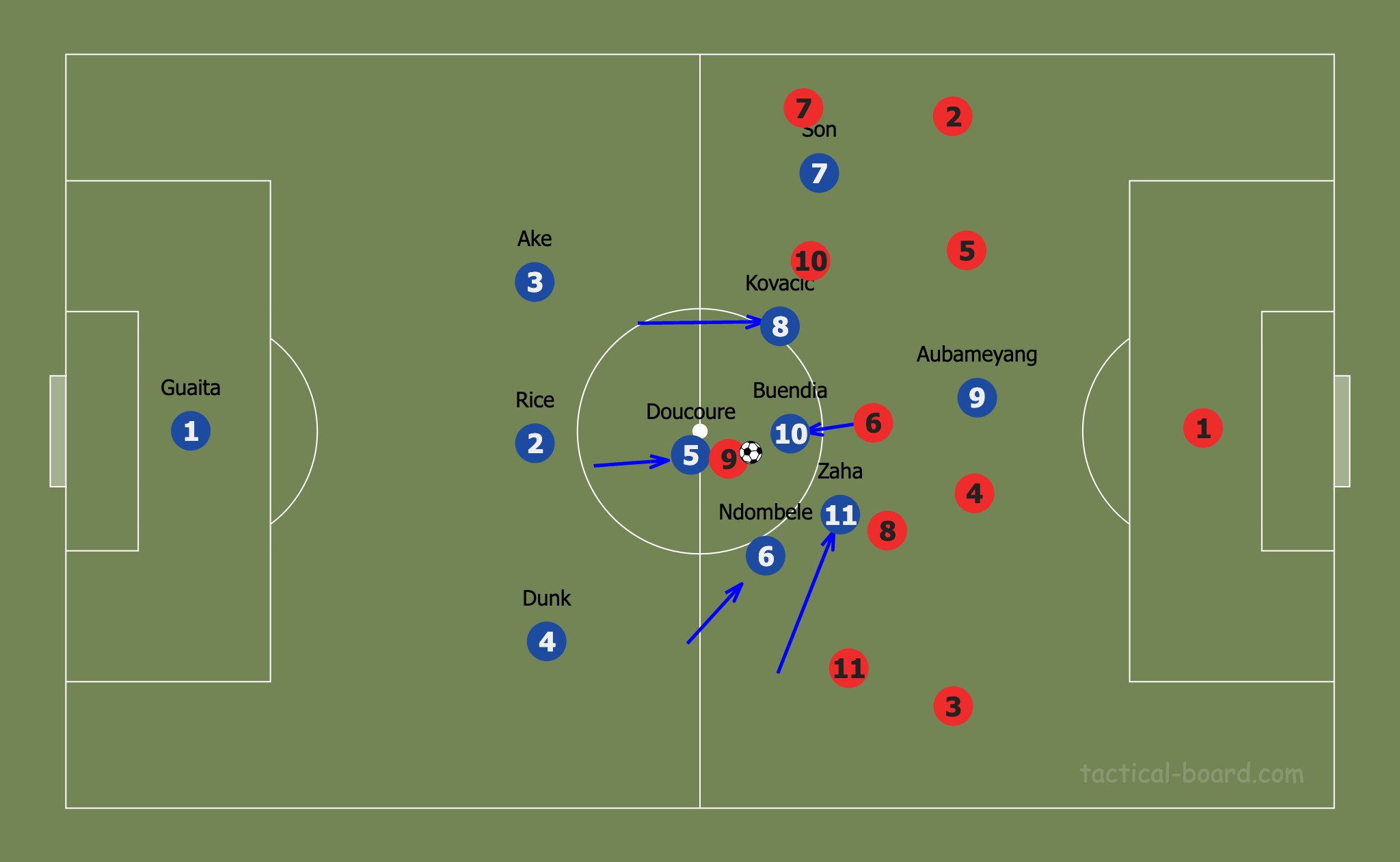 Due to the 3-3-3-1 shape I’ve chosen, I have 7 players (including the goalkeeper) to utilise to create space while playing out from the back. The 4-3-3 lends only 4-6 players for team North to use, depending on the aggressiveness of their press. Due to Rodgers’ philosophy and the players he has at his disposal, we’re likely to see a relatively high press from the Northerners, in a fashion similar to the image shown below. 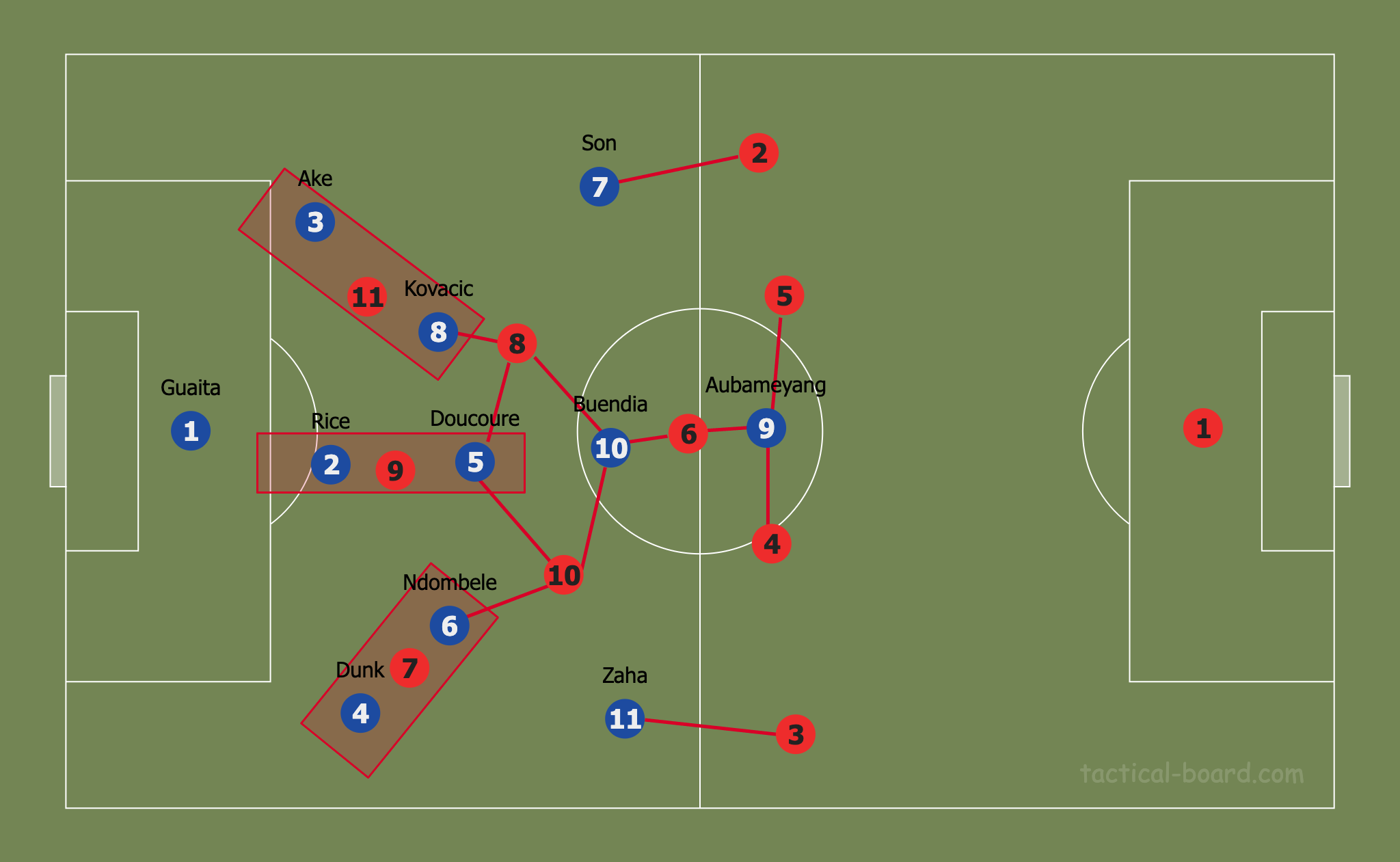 Due to the numerical advantage my team has in the first phase of build-up, many of the Northern players are forced into positioning themselves in a manner which cuts off multiple options. To take advantage of this, I’ll use rotations to give the pressing players a dilemma, follow the players who have moved, leaving space in the area which he previously occupied, or maintain his position, giving the player who has rotated space. Kovačić and Ndombélé will shift wide, looking to drag out De Bruyne and Fernandes, while Declan Rice will move into the midfield from his position as a centre back. Zaha and Son will drop slightly deeper, looking to drag the opposing full-back with them, and Aubameyang and Buendía will both take up positions in either halfspace. The dilemmas created are shown with question marks in the below diagram. 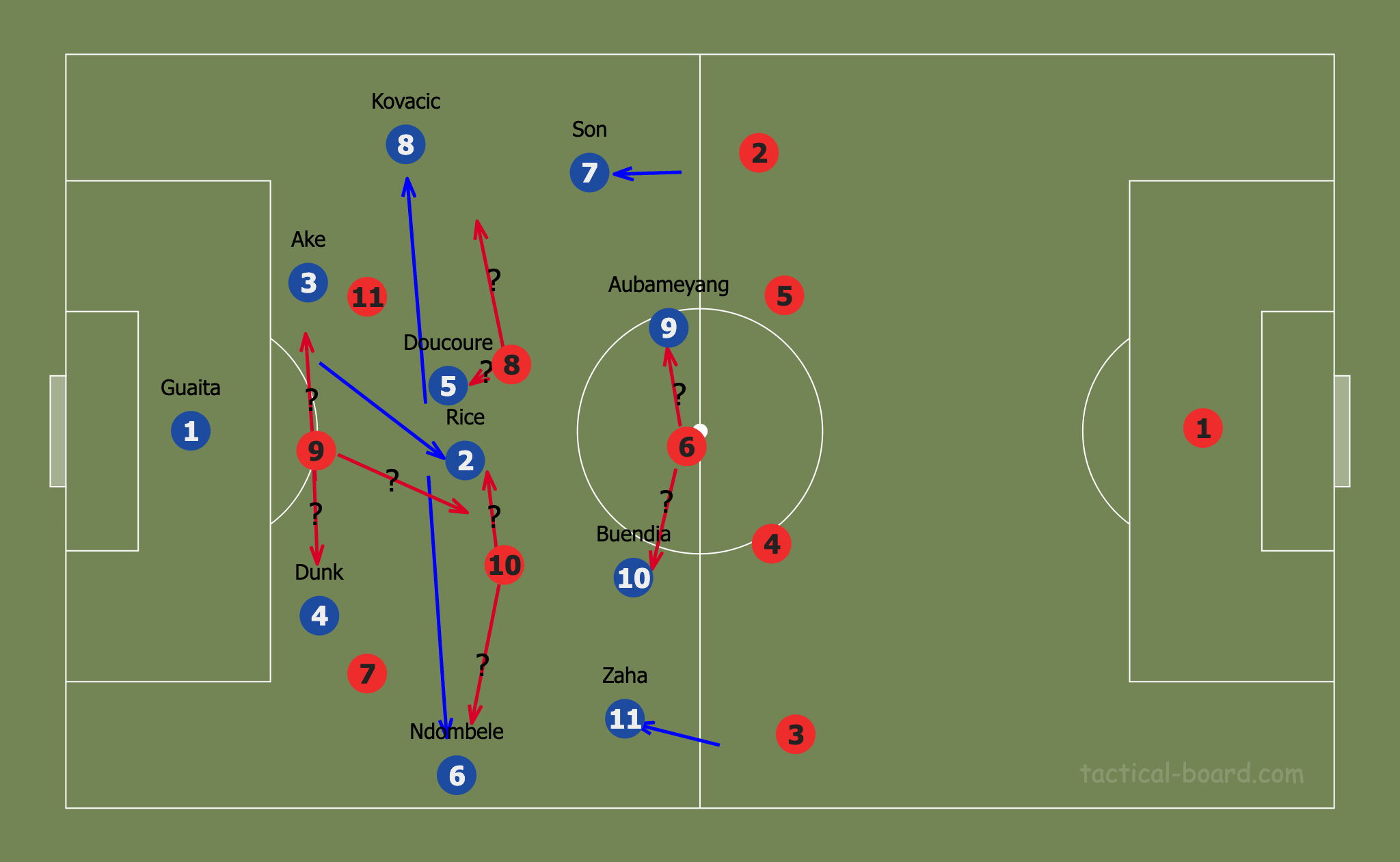 If the opposition full-backs are dragged forward by the movements of my wingers, Aubameyang and Buendía will take advantage of the space created by making a run into the space behind the opponent’s backline. We can see this occurring in the next image. 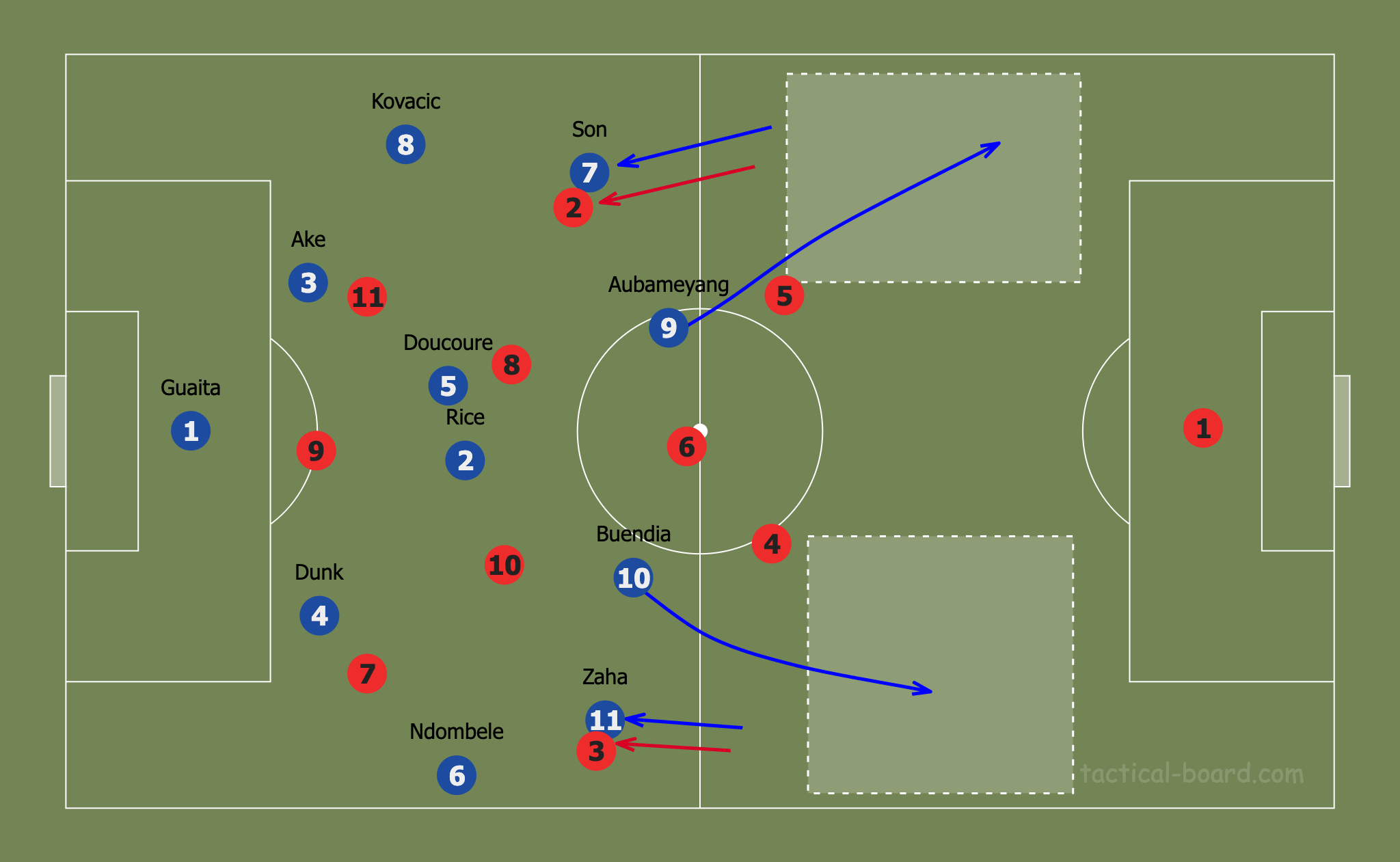 My main priority is to progress the ball via the midfielders. I have midfielders positioned wide and centrally, and our play will vary depending on who is in space. If the central midfielders find space due to Ndombélé’s and Kovačić’s movements, the following will occur (if only one of De Bruyne or Fernandes shift, depending on the position of the ball): Buendía will drop into the midfield, forcing Ndidi to either follow him or leave space in between the lines for Aubameyang. If Ndidi follows, We’ll circulate the ball to the free wide player who will look to target Aubameyang who has shifted into the halfspace and has space in between the lines. 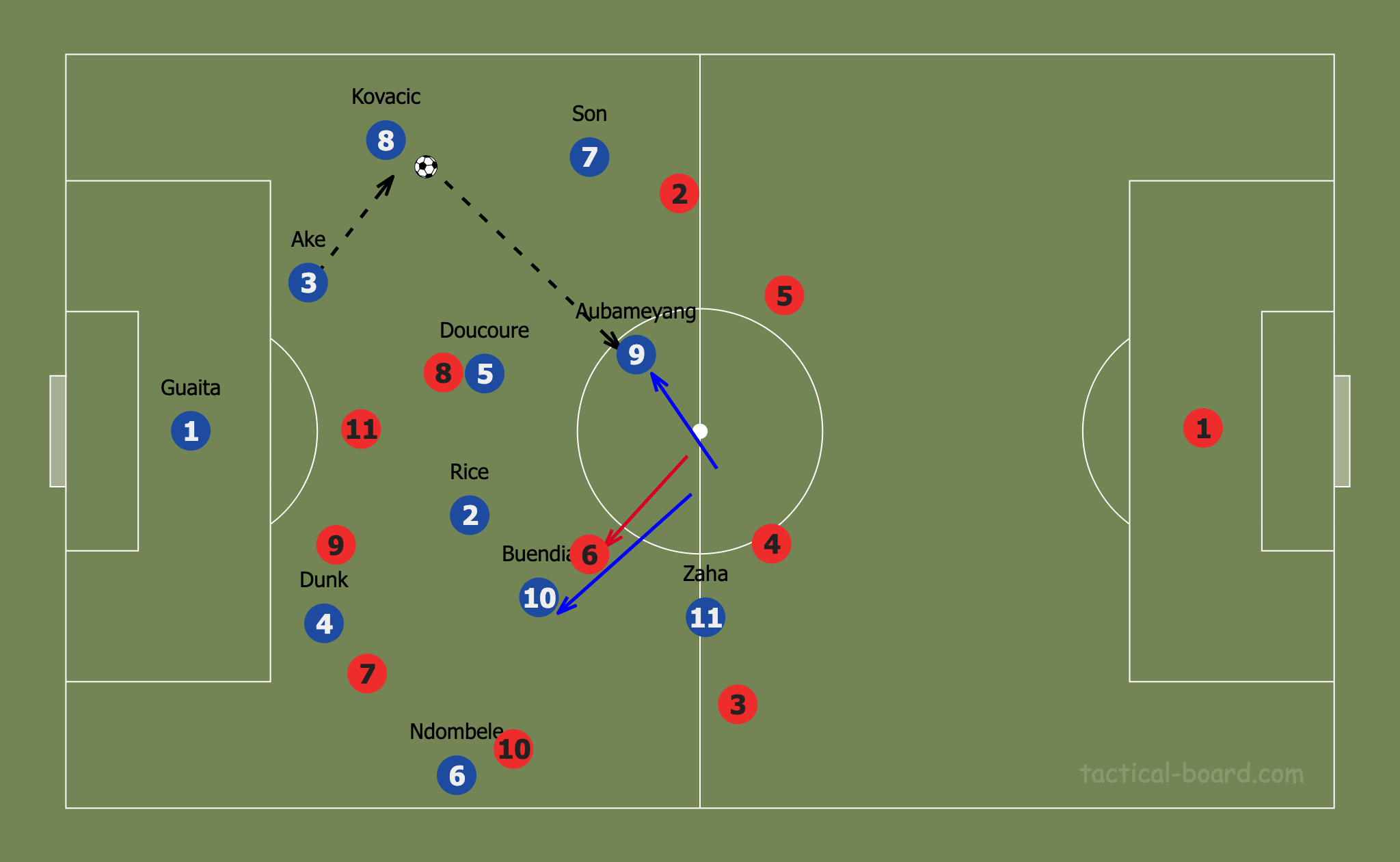 If Ndidi does not follow Buendía, we will have a 3v1 advantage in central midfield which we can use to circulate the ball via the centre. 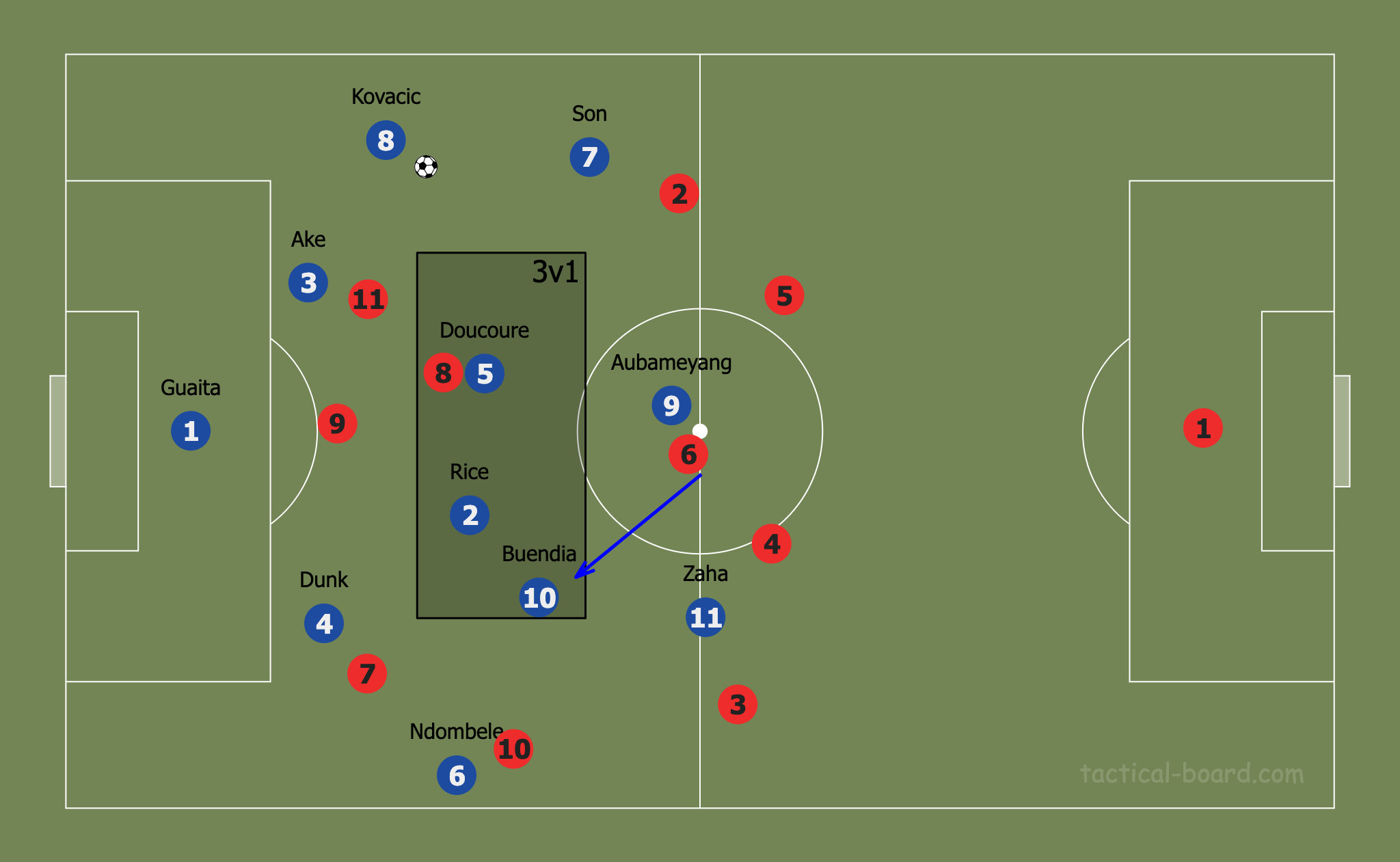 If the midfielders who have shifted wide have space. Rice will not push up into the midfield, allowing Nathan Aké and Lewis Dunk to hold wider positions. The team will create wide diamonds on the ball side with Aubameyang, the near sided centre-back, wide midfielder, and winger. Buendía will shift to the ball side halfspace to supplement the heavy rotational play used with in the diamond. To balance this, the far side wide midfielder will tuck in alongside the farside winger. 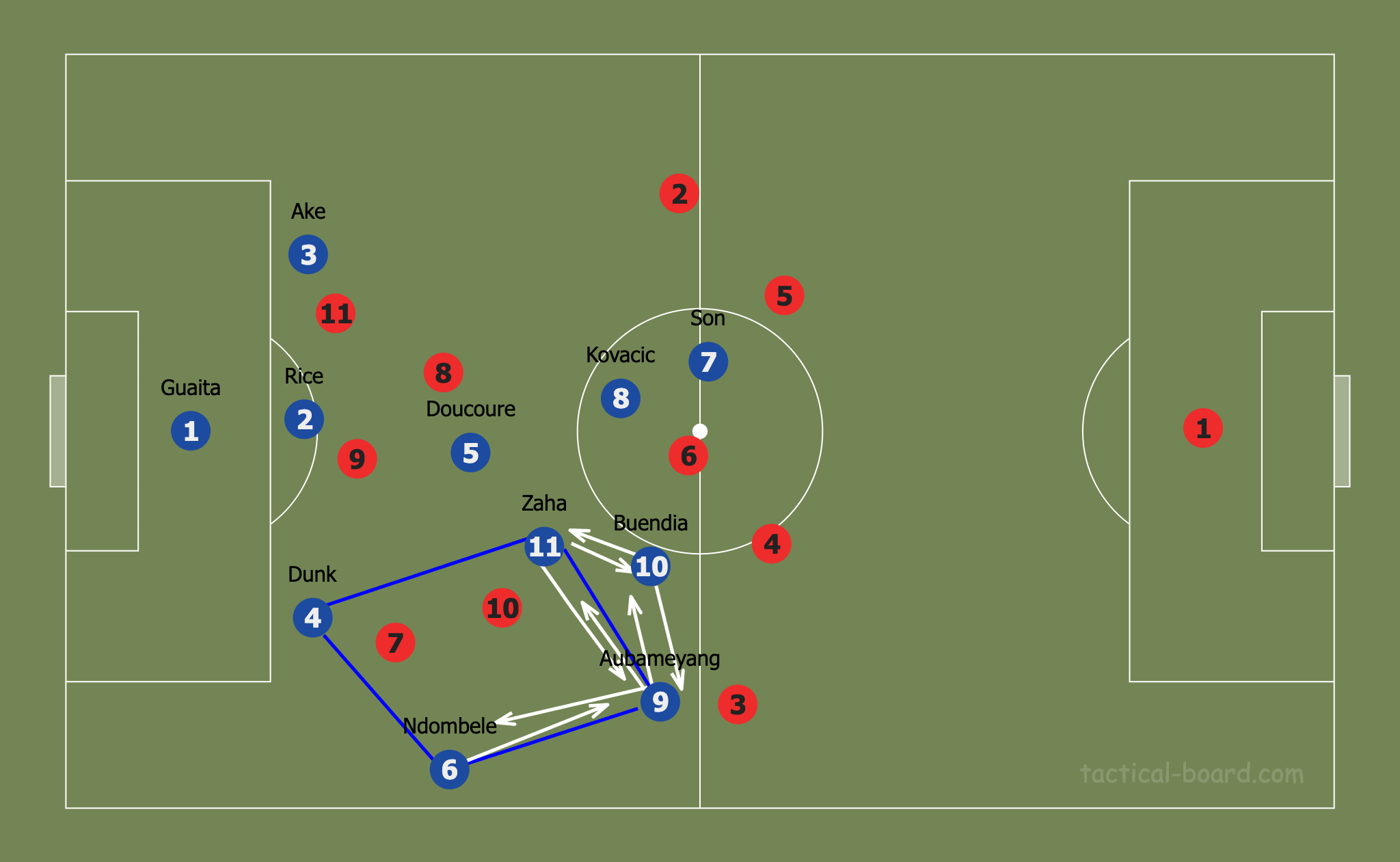 These patterns will be repeated as we move up the pitch, with the intention of playing balls in behind for Son and Aubameyang when the opportunity arises.

When my team has sustained possession, we’ll look to use the following structures and patterns. to create chances. The formation will change to a 3-2-2-3 with a midfield box. In the below image, we can see the spacing we’ll use to look to open up passing angles. I’ve used the typical five lanes pitch divisions, however, the halfspaces have been divided in two as our offensive positioning will be very particular. The two wingers will hold the extreme width, the wide centre backs will be positioned in the outer halfspaces, the two less advanced midfielders will be in the inner halfspace, while the two more advanced midfielders will be in the outer halfspaces. The central centre-back and the centre forward will be in the central space. 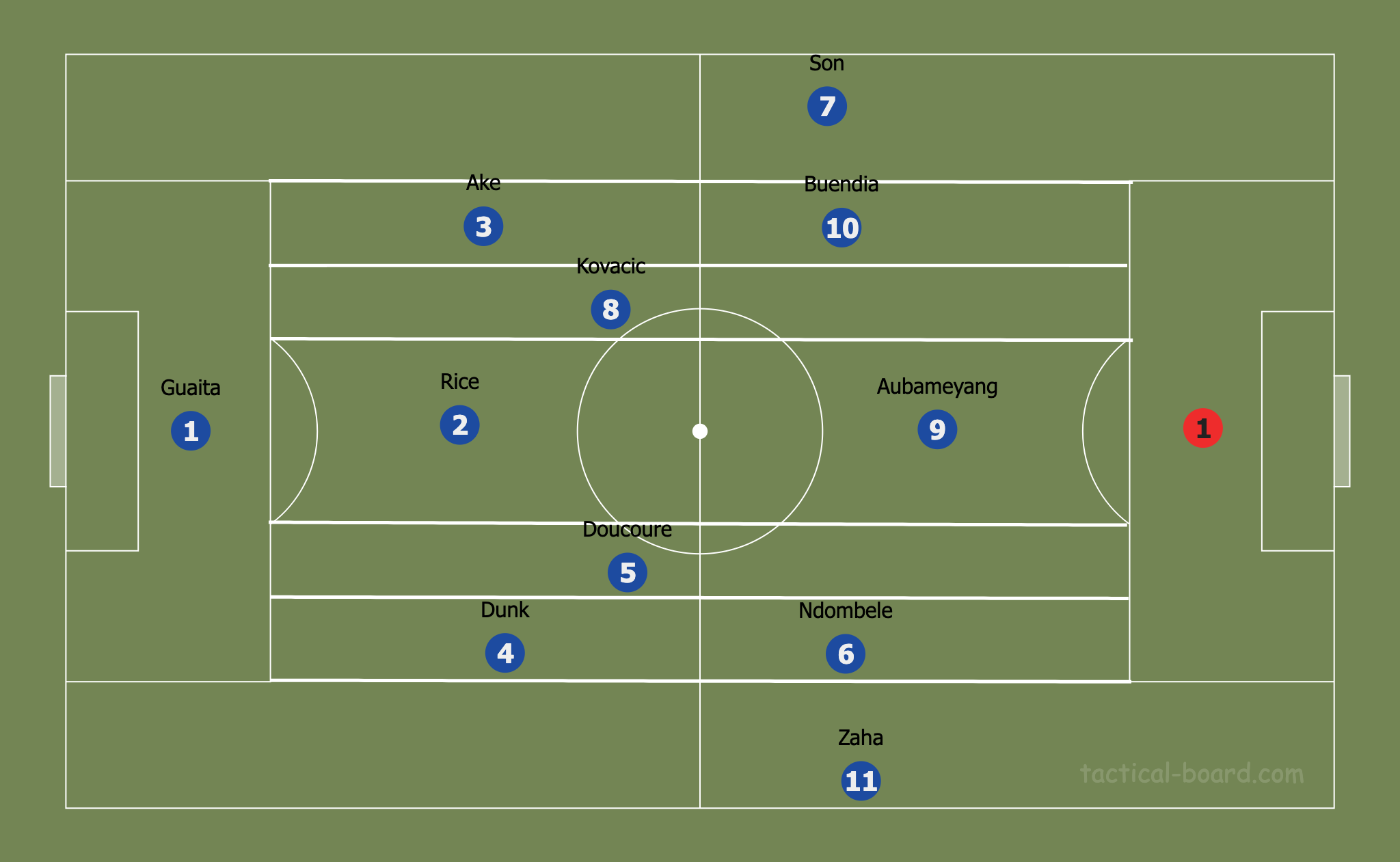 The way in which my players position themselves facilitate vertical play, which will be the primary method of ball progression. Due to the nature of our positioning, any way team North attempt to counter our movements will have it’s own counter. There are thousands of possibilities due to the open nature of football, but I will go over some ways which team North are likely to defend and present the counter. First, let’s see how the team North defensive shape might look in relation to our offensive spacing. 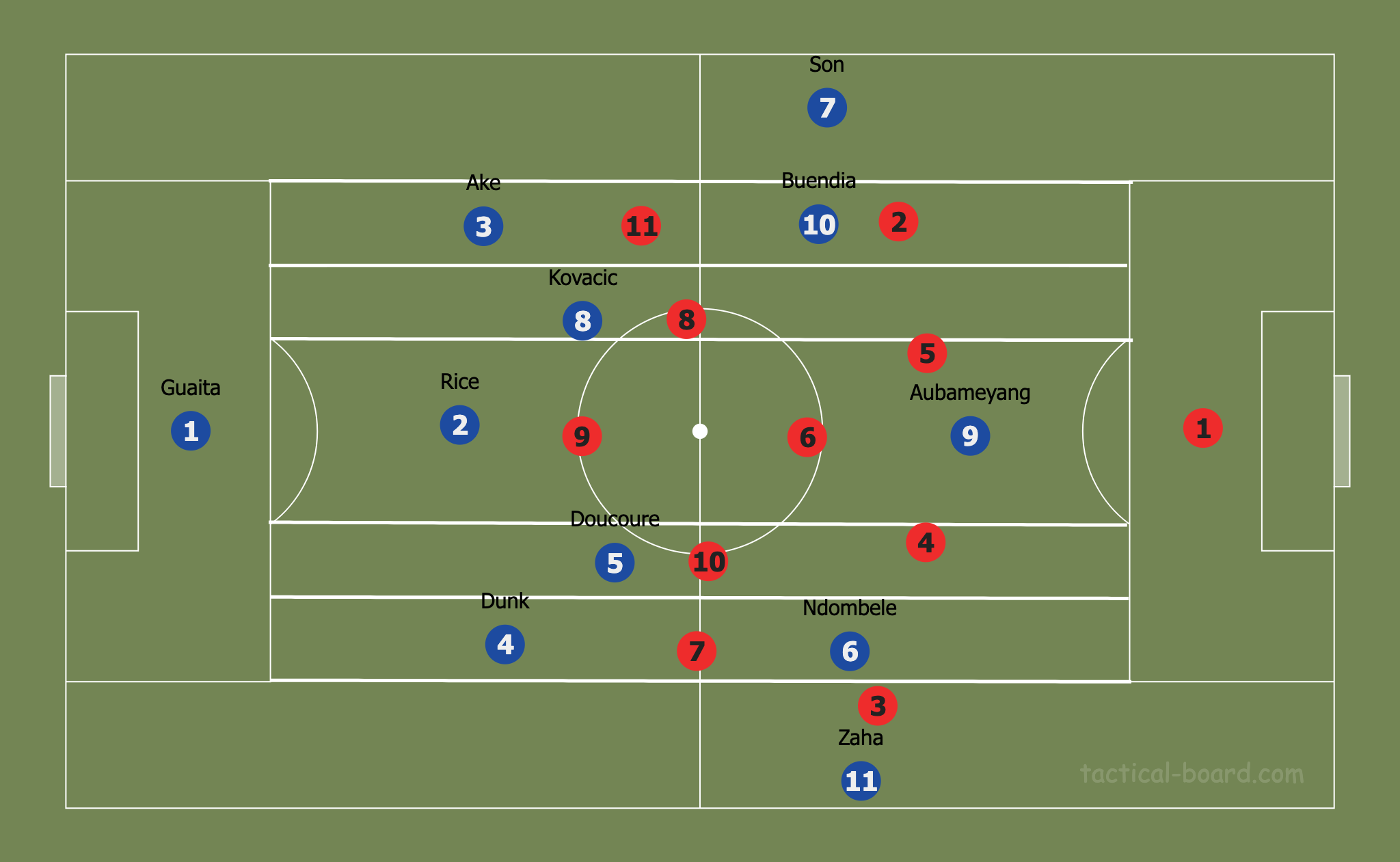 Rodgers is likely to set his side up in a 4-1-4-1 mid to high block when his side fall into their settled defensive shape. Our key objectives will be to progress the ball to out attacking midfielders in our box with just one or two direct passes. There are three ways in which we can pass to these players directly, via the centre back, the centre midfielder, or the winger. Which means we need to open up the passing lanes shown below. 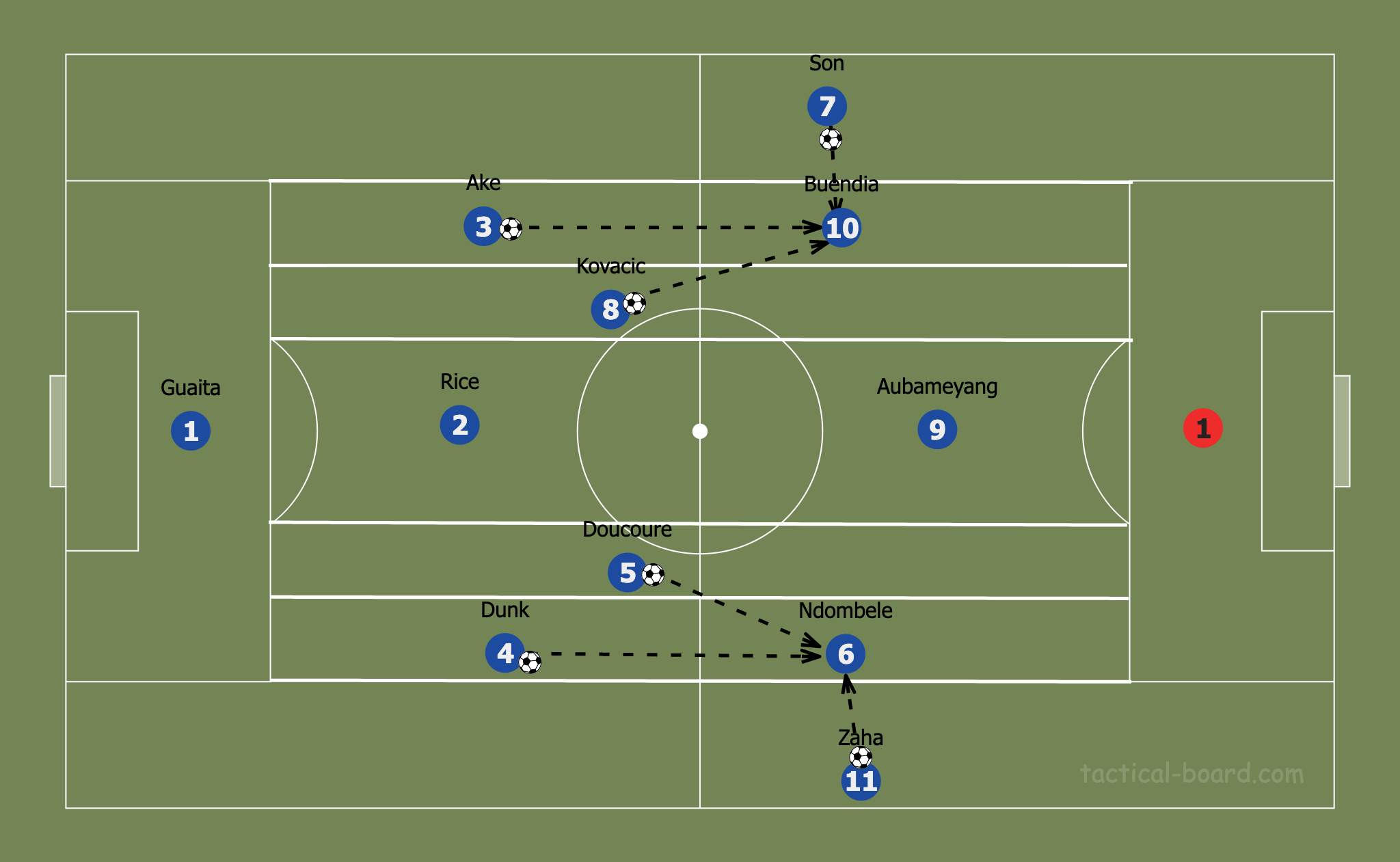 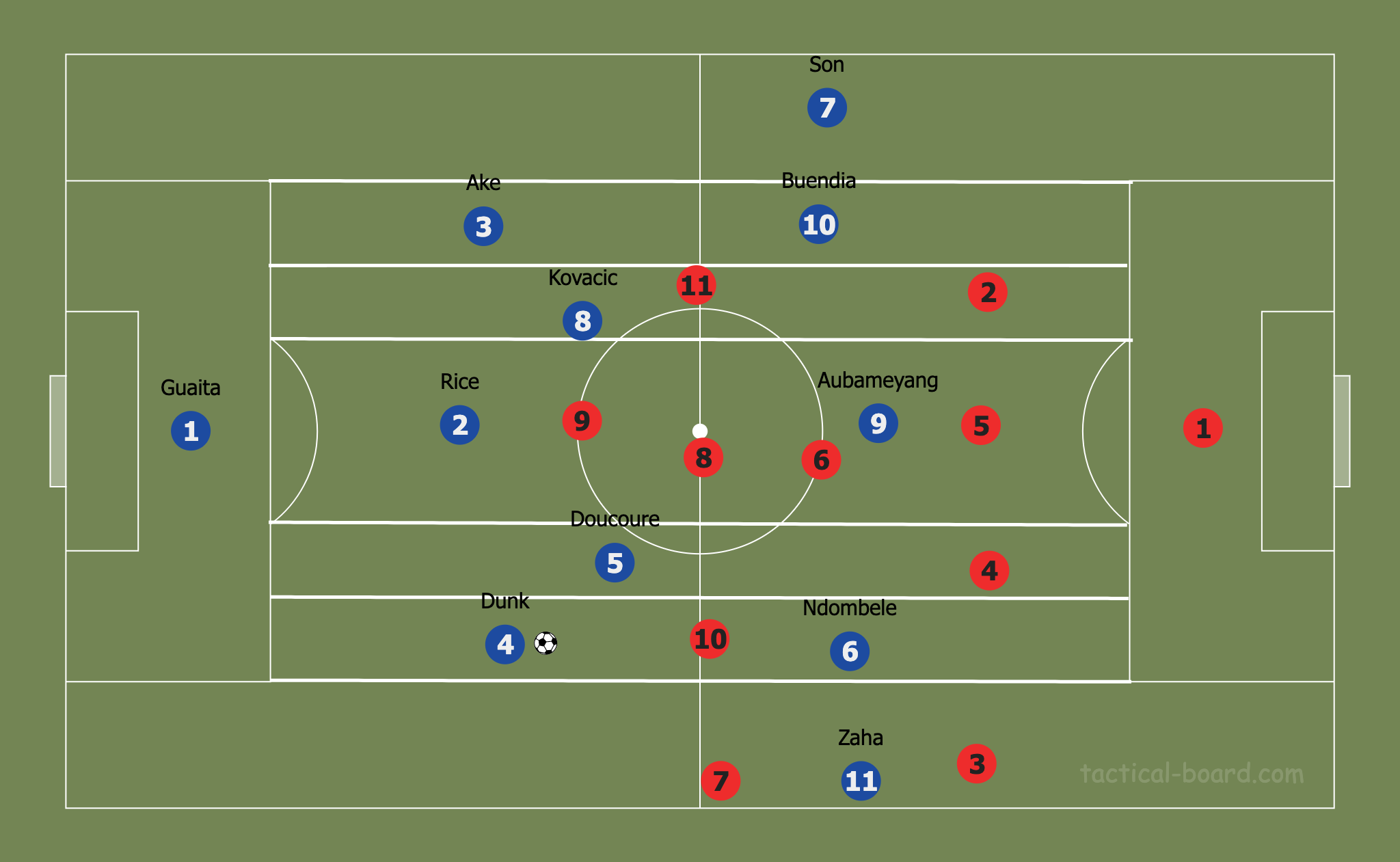 The first solution is to shift Aubameyang into the inner halfspace to create a third man movement. 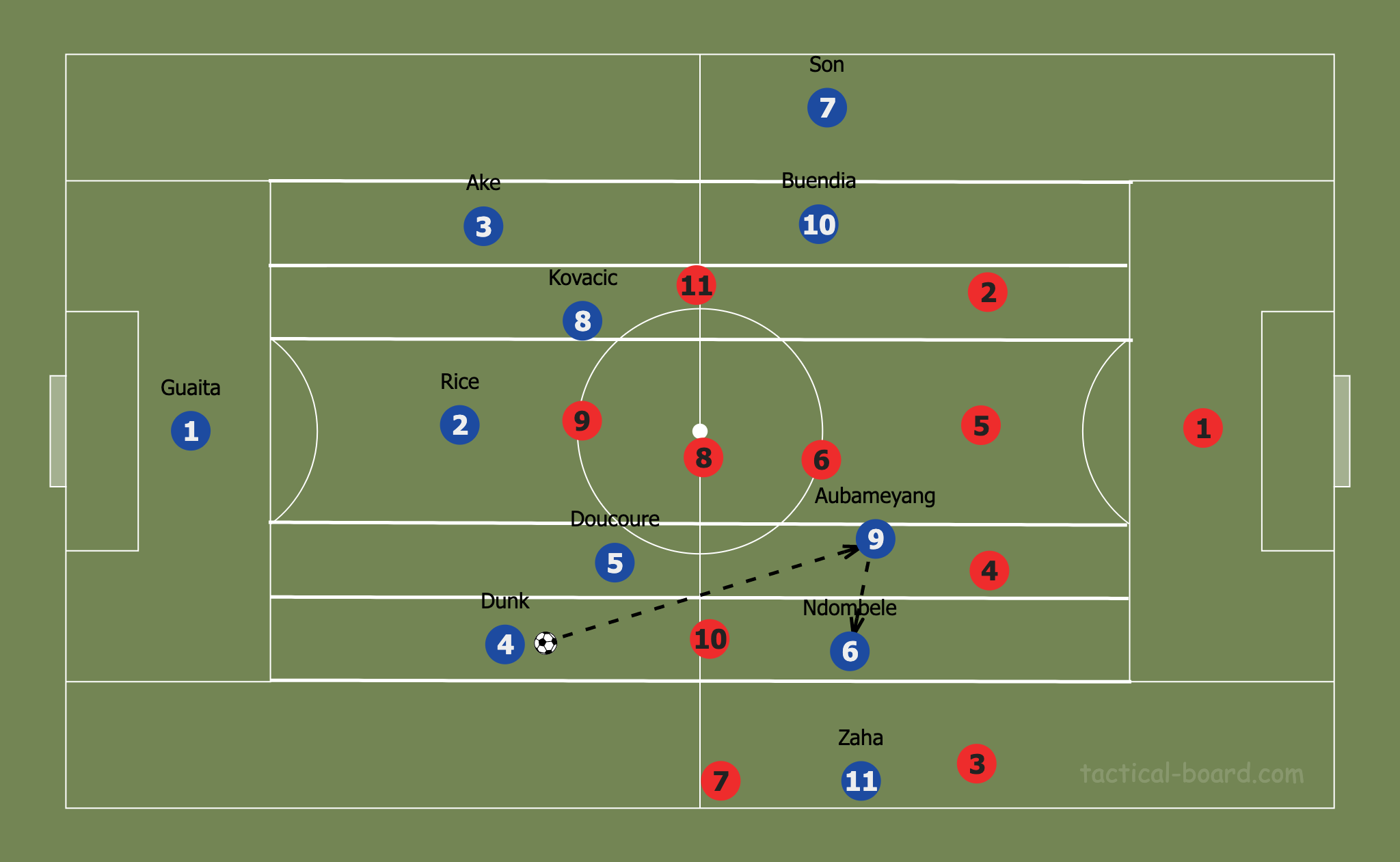 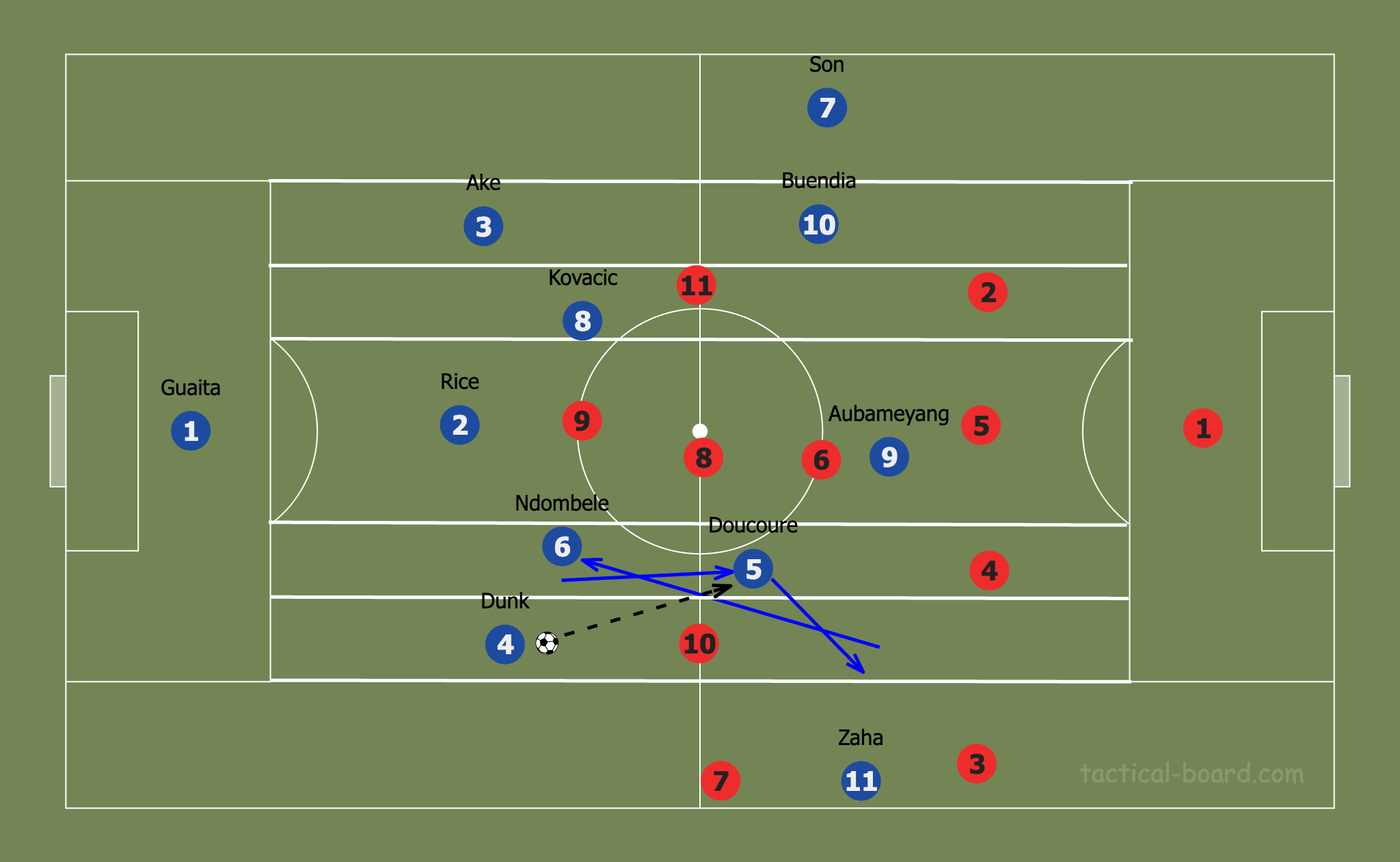 Although I have the weaker team, in my opinion, I believe that my tactics are good enough to beat Brendan Rodgers and team North, to crown the South as the elite footballing region of England.