If social distancing was eradicated, I’m not sure Schalke would still get any fans watching them. Since the restart of the Bundesliga nearly a fortnight ago, Die Knappen have struggled; losing convincingly to both Dortmund and Ausburg in quick succession.

Their next fixture took them to Düsseldorf, a side who are unbeaten since the restart and looking to continue their quest away from the drop zone.

On the night Düsseldorf prevailed, overcoming a one-goal deficit in a game that lacked quality for large parts of the evening. Despite this, there’s no debate that they walked out the deserved winners, yielding 2.27 xPTS demonstrating their dominance over the 90 minutes.

In this tactical analysis, we look into the tactics used by Düsseldorf to control the match and eventually turn the result in their favour.

The home side lined up with their preferred five-man defence. Andre Hoffman, Kaan Ayhan and Markus Suttner made up the centre-back trio, who were deployed as the starting point for building attacks. From there, Marcel Sobottka operated as the deeper-lying midfielder in a midfield three that rotated between a single pivot and double pivot depending on the press being implemented.

Valon Berisha and Kevin Stöger were the two midfielders positioned slightly further forward. The pair acted as a double pivot when Sobottka was shadow covered by the opposition striker or pushed on behind the midfield line to create penetrating passing channels for the centre-backs to find. Matthias Zimmerman and Erik Thommy provided the width from wing-back positions. The pair worked together to stretch the Schalke defensive by pushing beyond the ball in the attacking phase. 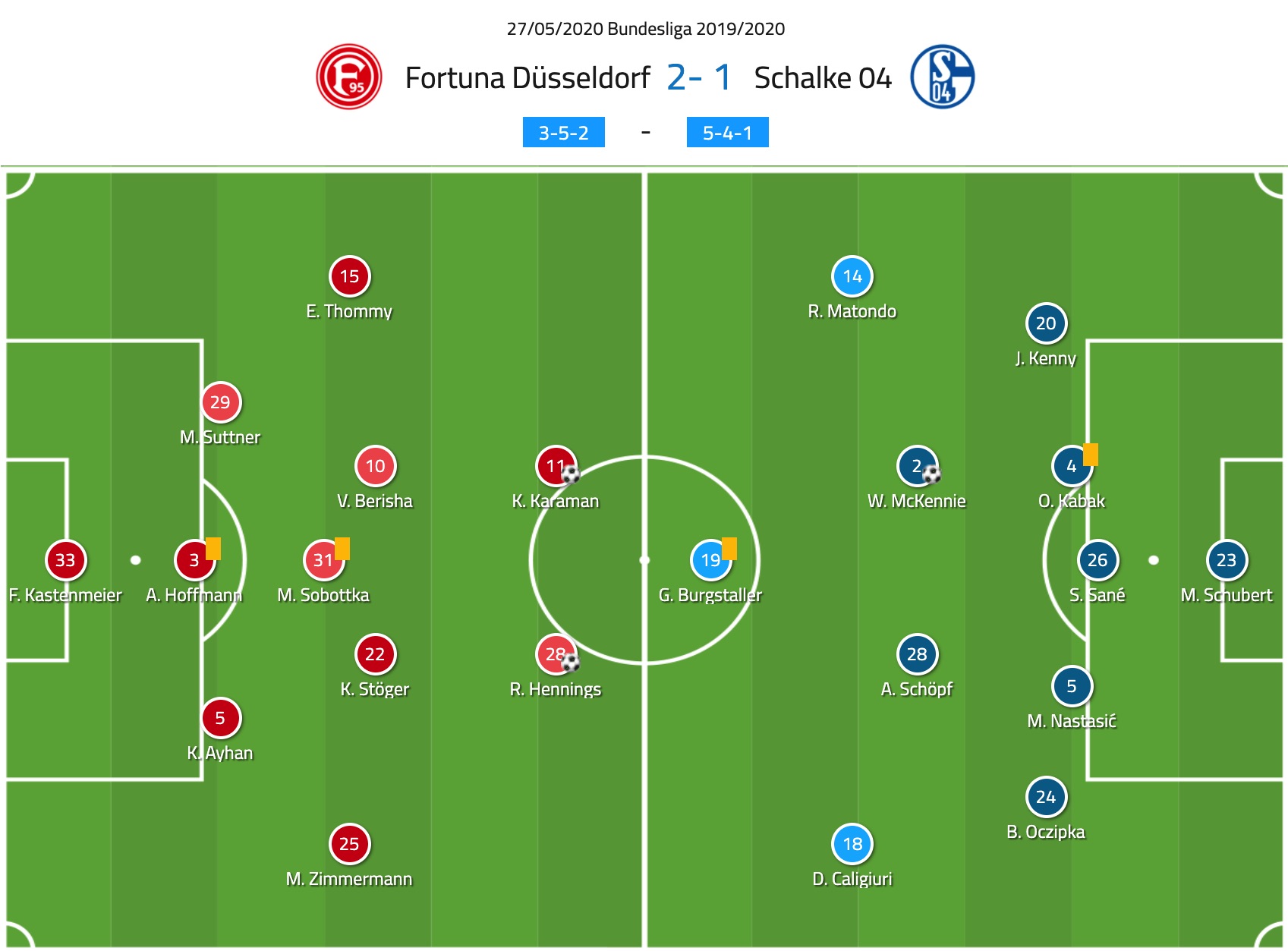 David Wagner lined his team up in an unfamiliar 5-4-1, in an attempt to thwart the opposition playing style. Salif Sané, Ozan Kabak and Matija Nastasic were the selected centre-back trio, who held a deep line to reduce any exploitable space in behind. This deeper positioning also welcomed Düsseldorf forward, exposing space in behind. This was the primary tactic of the visitors, to play direct passing in behind to catch Düsseldorf as they advanced. Everton loanee, Jonjoe Kenney and Bastian Oczipka completed the 5-man defence. The pair were not as adventurous as their counterparts, being more concerned with keeping their shape tight and not being exploited by being out of position.

The middle of the park was marshalled by Alessandro Schöpf and Weston McKennie. Their primary role was the congest the central zones of the pitch in the defensive phase to block passing lanes and engage in duels to recover possession. Once in possession, however, the pair were not concerned with collecting the ball from their centre-backs. Unlike Düsseldorf, Schalke looked to go long early, averaging just 2.4 passes per possession. Rabbi Matondo and Daniel Caligiuri were labelled as the right and left midfielders, however, in reality, they tucked inside considerably almost playing as additional centre midfielders. This positioning congested the middle further but lead to other problems defensively, as we look at later.

As mentioned, the home side dominated the play from the early minutes, averaging 63% possession overall. In the attacking phase, Düsseldorf used a variety of methods to penetrate the rigid Schalke shape. As we can see below, all attacks started from the back, with the defensive line heavily involved in ball rotations; patiently waiting for the right channels to present themselves as Schalke’s shape moved laterally. We can also see the strong connections between the midfield three and defensive line, demonstrating how easily Düsseldorf could progress possession if their first option was not open.

Out of possession, Düsseldorf were aggressive. However, due to Schalke’s tactics being centred around direct passing, a lot of recoveries were made from cutting out low-percentage passes in the defensive third. This meant when Shalke did attempt to curate a spell of possession football, Düsseldorf had the energy to press aggressively in an attempt to win the ball back in dangerous areas. This led to the home side dominating possession as we’ve seen and also making 99 recoveries of possession.

We can quickly see the contrast when looking at Schalke’s passing network. The visitors completed just 202 passes compared to the host’s 476. The visitors attempted early long passes into Guido Bergstaller, trying to build attacks off of him. Their playing style on the night is easily summarised by one of the strongest connections below being between the goalkeeper and striker.

Despite this negative tactic – which will almost certainly have to do with stopping the rot in terms of form – Shalke managed to create the biggest chance in the first half after a mistake from the Düsseldorf centre-back put Caliguiri through on goal. The chance yielded 0.17xG which sadly for the away side, the German couldn’t take.

Out of possession, Schalke were rigid and structured. The wing-backs tucked in alongside the centre-backs to make a flat back five. The midfield condensed, narrowing the midfield which blocked off easy passing channels into the strikers. Burgstaller dropped into a containing position, not looking to press the ballplayers in possession, instead using his positioning to frustrate the home sides attacks. Wagner’s men averaged 15.37 PPDA, highlighting their preference of space containment over pressing intensity.

This section provides an analysis of how the four-man midfield of Schalke was tactically overloaded, allowing chances to be created more easily for the Western side.

Below is a common scenario that occurred in the match. Düsseldorf established controlled possession quickly, due to the absent opposition press. Notice how the midfield four are compact, pushing tight to the rotating midfield pivot. In this instance, Berisha and Stöger have realised Sobottka has been blocked and dropped deeper in tandem to act as a double pivot. This fluid movement allowed the home side to develop their attacks as the opposition midfield were reluctant to follow these movements closely – in fear of opening up space in behind.

As the play progresses the possession cycle takes the ball into the channels, which remain open as you can see. These passes at a reasonable tempo forced the Shalke structure to constantly shift laterally and in unison. Once the ball reached the outside centre-back – who had advanced safe in the knowledge there was little transition threat – the Schalke winger was forced out of his shape and the wing-back dragged forward to engage. We can see the central midfielder pointing at the player, signalling for the centre-back to step up and pressure the man who has moved into space.

The Schalke defenders, however, were too focused on protecting the run in behind, so instead of pushing up to squeeze their shape and close the vertical spaces, they dropped to follow the run. This widened the gap between the midfield and defence which with one pass, became easily exploitable.

Here we see the consequences of the midfield four being too stretched and the defence not assisting by holding a deeper line. One pass through to the midfielder between the lines enabled him to pivot on the ball and drive at the retreating back-line.

There are two solutions Wagner could have used to prevent being easily penetrable. Firstly he could have instructed his backline to hold its depth, not dropping with the run but playing a more aggressive style and attempting to catch the striker offside. A brave and well-marshalled defensive line would have prevented the distance from opening up between the lines, making Schalke harder to break down.

The other solution was to adjust formation. By introducing an additional midfielder in the centre of the pitch would have prevented overloading from occurring and created a man-marking situation where the defensive midfielder could have been touch tight to the player in the hole. Instead, he was just left due to lack of communication and player indecision, forcing the Schalke midfield to suffer.

On top of finding incisive passes through the lines, Düsseldorf also made the most of the space afforded to them on the wings.

After a fluid interchange in a congested space, Düsseldorf quickly switch the play. The narrow Schalke midfield (highlighted) is powerless against the width held by the wing-back who now has acres of space to move into.

Despite being happy to allow these channels to remain open when set in their defensive shape, Schalke became exploitable when possession was quickly transferred from one flank to the other.

This resulted in the home side attempting an impressive 17 crosses in total. Which, as we can see from the graphic below, 65% of those came from the right-hand side. 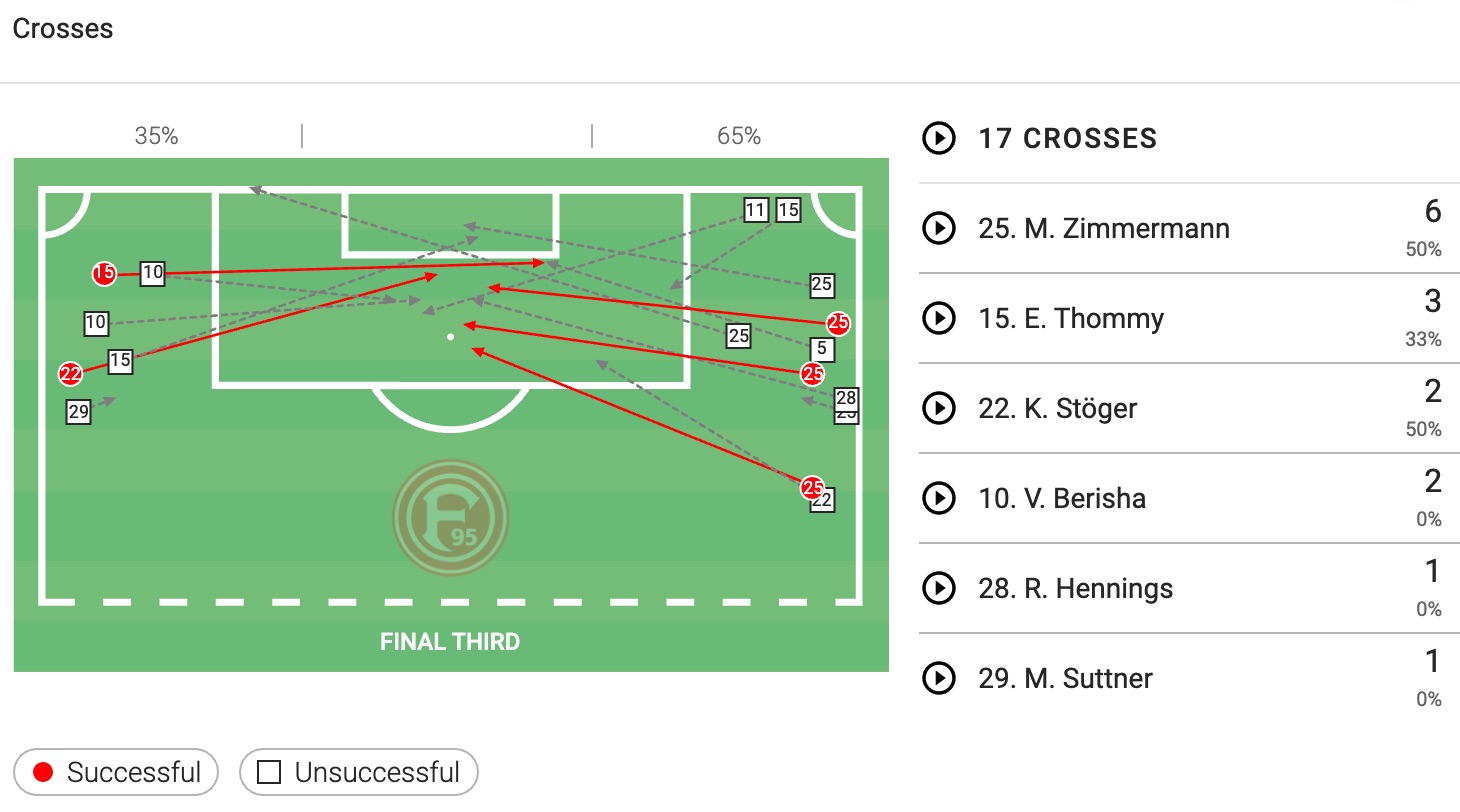 The player totals on the right highlight how effective the wing-backs were when there was space to move into. Both Zimmerman and Thommy were the most frequent crossers of the ball, delivering six and three respectively.

Though not from open play, it was a cross from a corner that put the relegation battling side in front, where they stayed until the final whistle.

Schalke need to find a win somehow. As we’ve seen they are slipping into poor habits defensively which amplify as the defeats continue to roll in. On top of that, this analysis has shown that their tactical approach is becoming more and more reactive, seemingly focussing on stifling the opposition style over exerting their own. This is something that will irk the Schalke fans who expect better from a side that should be pushing higher up the table.

Düsseldorf deserved this win. Tactically they were superior and this showed from the increased quality chances they created. A vital home win for Uwe Rösler’s men sees them move further away from the bottom two. The German manager will be hoping to take this confidence into their next match where they face league-leaders Bayern away from home.