Millwall: The kings of the corner kick?

Set pieces and in particular the corner kicks are still underutilised weapons in football. In the Championship this season, Aston Villa lead the way in the set-piece scoring charts with 22 goals. Millwall are 5th in those rankings having scored 16 goals from set-pieces. This reflects a scoring rate from set pieces of a goal every 2.3 games.

Having only scored 41 goals this season in the Championship, 39.1% of Millwall’s goals have come from set-pieces. Only Rotherham have a greater percentage of their goals coming from set-pieces with 40%.

In the past week, some notable attention has been paid to Millwall’s set-pieces. Ted Knutson (@mixedknuts) of Statsbomb tweeted the following graphic. 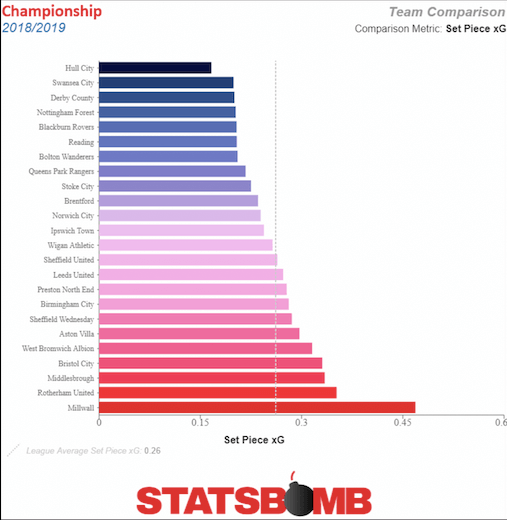 Here we can see that Millwall are incredibly effective at generating good quality chances from set pieces. The league average for set-piece xG is 0.26. Millwall’s is upwards of 0.45. In a follow-up tweet, Knutson shared an image of Millwall’s shot map from set pieces. 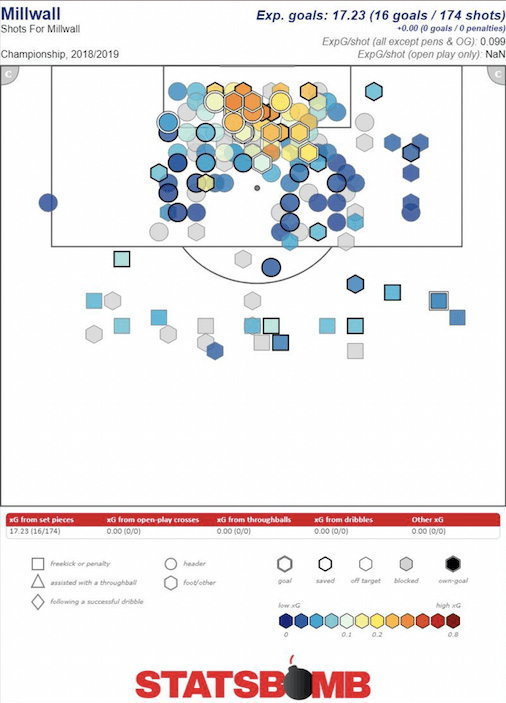 This is a mightily impressive shot-map. Millwall appear to be very good at getting a lot of shots from inside the six-yard box. To further emphasise Millwall’s ability at getting shots from set-pieces we can consult this graphic from set-piece analyst Stuart Reid (@From_The_Wing on twitter). 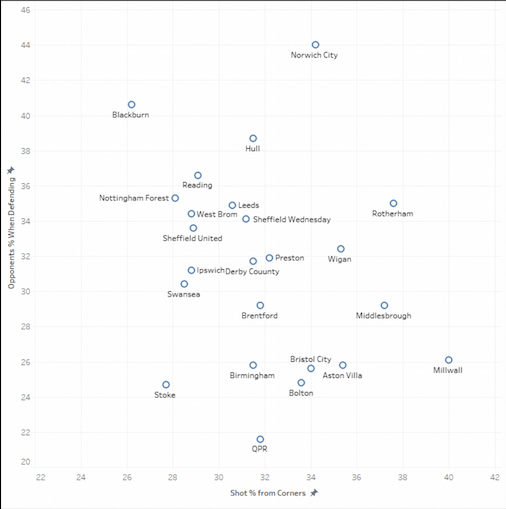 According to the data here, 40% of Millwall’s corners end up in a shot. When compared to other teams around Millwall in the league this is impressive. The likes of Reading and Ipswich operate between 28% and 30%. Wigan have a rate between 34% and 36% with Rotherham between 36% and 38%.

All of this leads one to wonder what Millwall are doing from their set pieces to create such good chances on a regular basis.

I was interested in looking at a number of aspects of Millwall’s corner kicks. Do Millwall opt for an in-swinging or out-swinging delivery? Do they aim the ball towards the front post, back post or in the centre of the goal? And are Millwall’s corners delivered into the six-yard box, around the penalty spot or to a deeper position?

To determine whether I considered the corner being delivered towards the front post, back post or centre of the box and how deep the corner is, I used the following diagram. 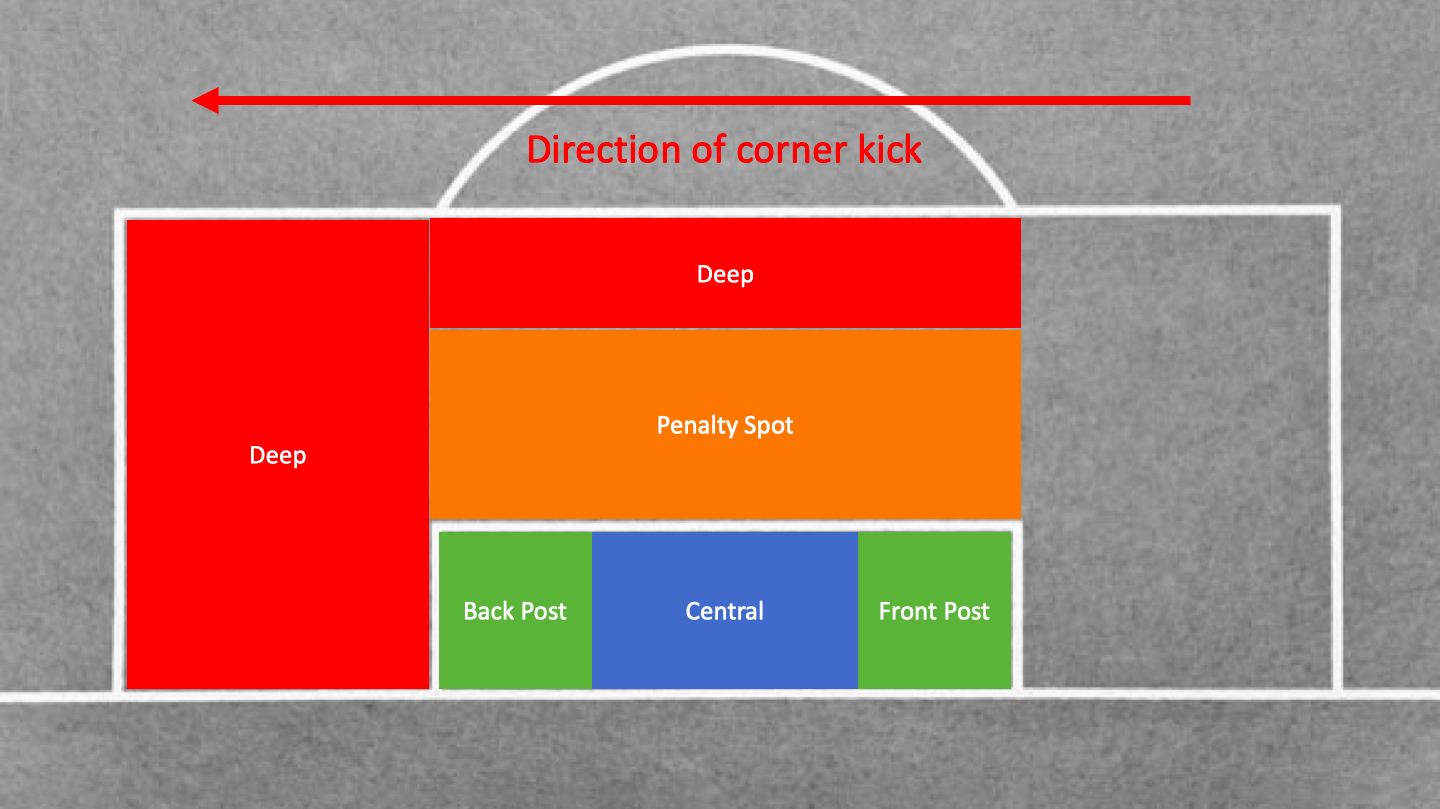 In order to do this, I watched back every corner that Millwall have taken in the EFL Championship this season up until their game against Bolton on the 9 March 2019. As I was watching the corners I made a note of each corner based on the aforementioned parameters.

Firstly, let’s look at whether Millwall prefer an in-swinger or an out-swinger. 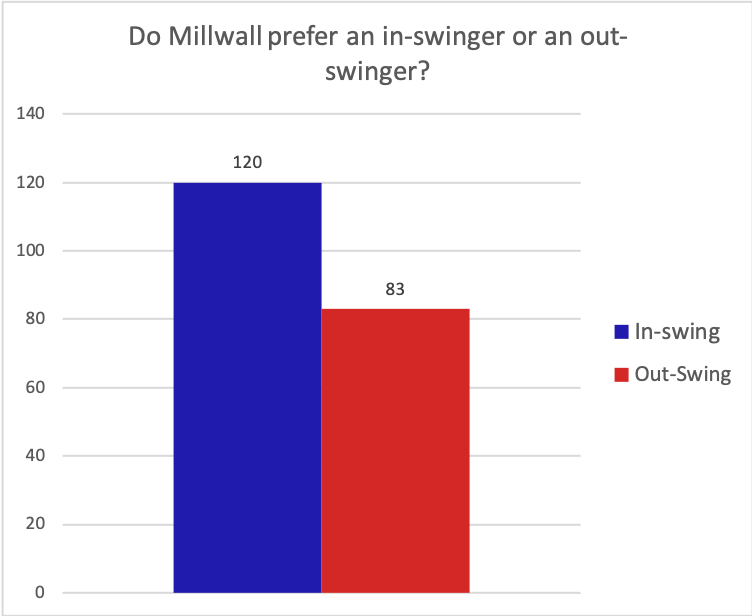 This data suggests a clear preference of Millwall to take in-swinging corners. This seems fairly self-explanatory. When a corner taker swings the ball in towards the goal it can only take a small flick from either an attacker or defender for the ball to find the back of the net. If a team opts for an out-swinging corner it is more likely that an attacker will meet the ball further from goal, thus making it a more difficult chance to convert.

What stood out however in the comparison between out-swingers and in-swingers is that depending on what kind of corner is being taken, the corner taker will alter the way they deliver the ball. When Millwall deliver an out-swinger (a right-footer from the right-hand side or left-footer from the left-hand side) they more often than not tend to float the ball with backspin into the box. On the other hand, when a Millwall corner taker delivers an in-swinging corner they tend to whip the ball with a lot of pace.

Whether the ball is delivered towards the front post, back post or into the centre of the goal can determine the quality of chance a lot of the time. Below are the statistics for Millwall. 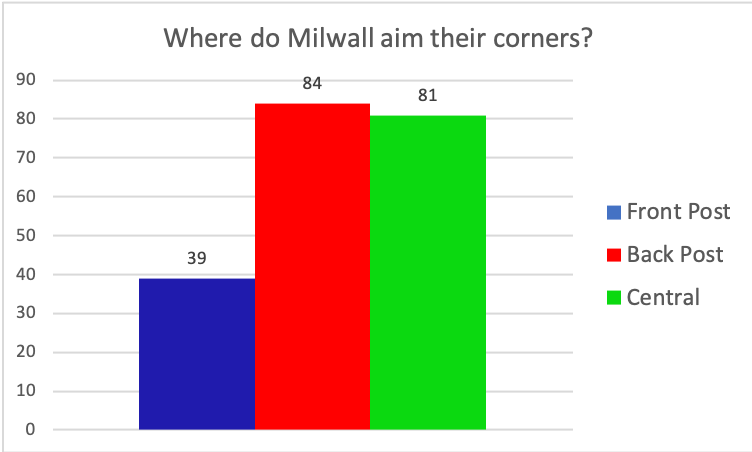 When an attacker is attempting to do the latter there is much less of the goal to aim at. A goalkeeper can more easily move towards the front post whilst also covering a flick into the centre of the goal or far post. In flicking the ball on from the front post, an attacker has far less control over where the header will end up, thus reducing the xG value of the chance.

It almost goes without saying that delivering a corner into the centre of the goal leads to a higher xG value of the resulting shot. The attacker has almost all of the goal to aim at and it is much more difficult for a goalkeeper to cover the entirety of the goal. In addition to this, if an attacker meets the ball in the middle of the goal they don’t necessarily have to make the cleanest contact with the ball and there can be some margin for error in the header. For example, if the ball slices off the attacker’s head it can still fly into the far post from less than 6 yards out.

As with corners into the front post, some of the corners that went towards the back post were overhit and actually cleared all of the attackers. However, a significant number of Millwall’s back-post corners were intended. By directing a corner towards the back post the corner taker gives their teammate greater control over his header when the ball reaches them. An attacker will be heading the ball back towards goal after having time to watch it travel towards them. A header at the back post can also be used as a knockdown for another attacker to finish in a more beneficial position. 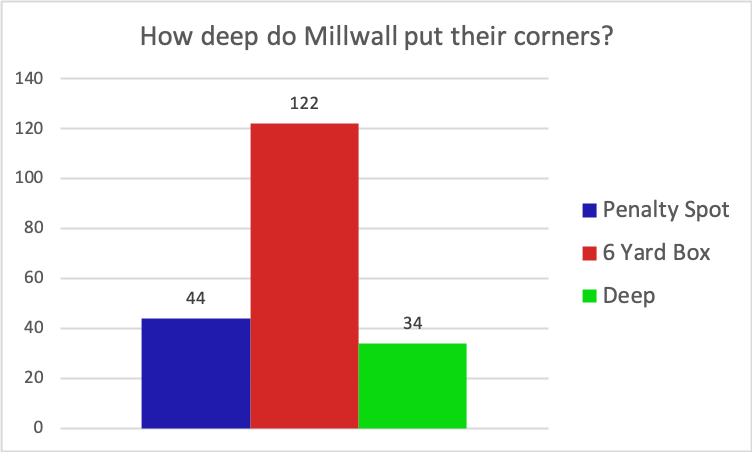 It is clear looking at the statistics that Millwall overwhelmingly favour a corner kick into the six-yard box. Of the corners that were crossed into the box, 61% of Millwall’s corners are aimed six yards or fewer away from the goal. The benefits of this are again clear. In terms of xG value, if an attacker is able to head the ball from within six yards of the goal this greatly increases the chances of the ball hitting the back of the net.

How do Millwall position attackers at corners?

A good delivery is all well and good but if there is no one to attack the ball a good delivery is almost redundant. In order to observe this, I looked back at all the corners taken by Millwall against Bolton (their latest game at the time of writing) a couple of weeks ago. Below are some images of their corner setups. 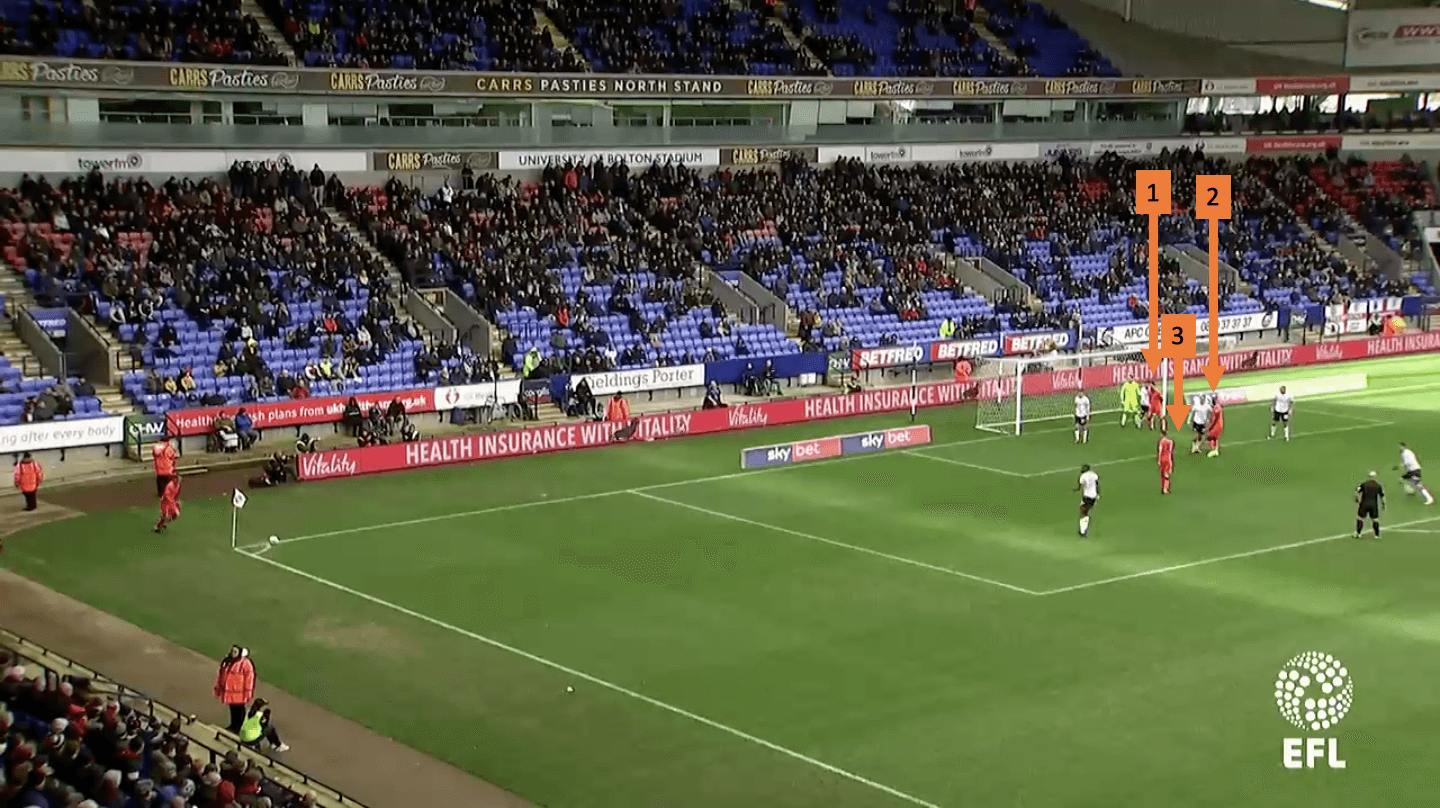 Before the corner is taken, Millwall always positioned at least two players in and around the six-yard box. One player challenges the goalkeeper and attempts to legally prevent him from coming and claiming the cross. One or two other players will float around and look to create half a yard and win a header from a standing start.

This subsequently forces the opposition to take up a deeper starting position from corners as they are forced to mark a number of men in the six-yard box. This then allows deeper runners to attack the six-yard box in one-on-one situations. 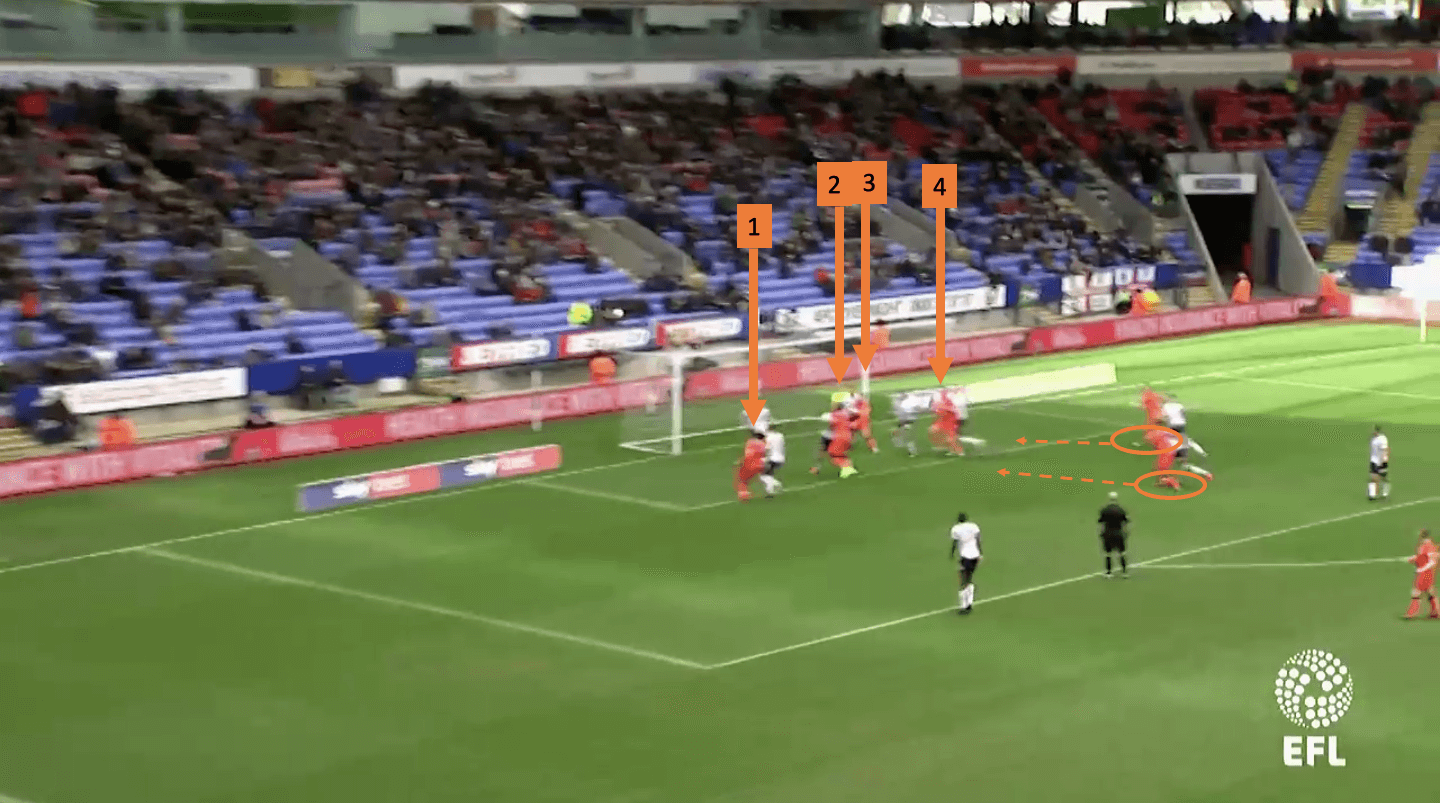 Once the ball starts to be delivered the deeper runners attack the six-yard box, resulting in up to six attackers being inside the six-yard box. This is very difficult to defend. 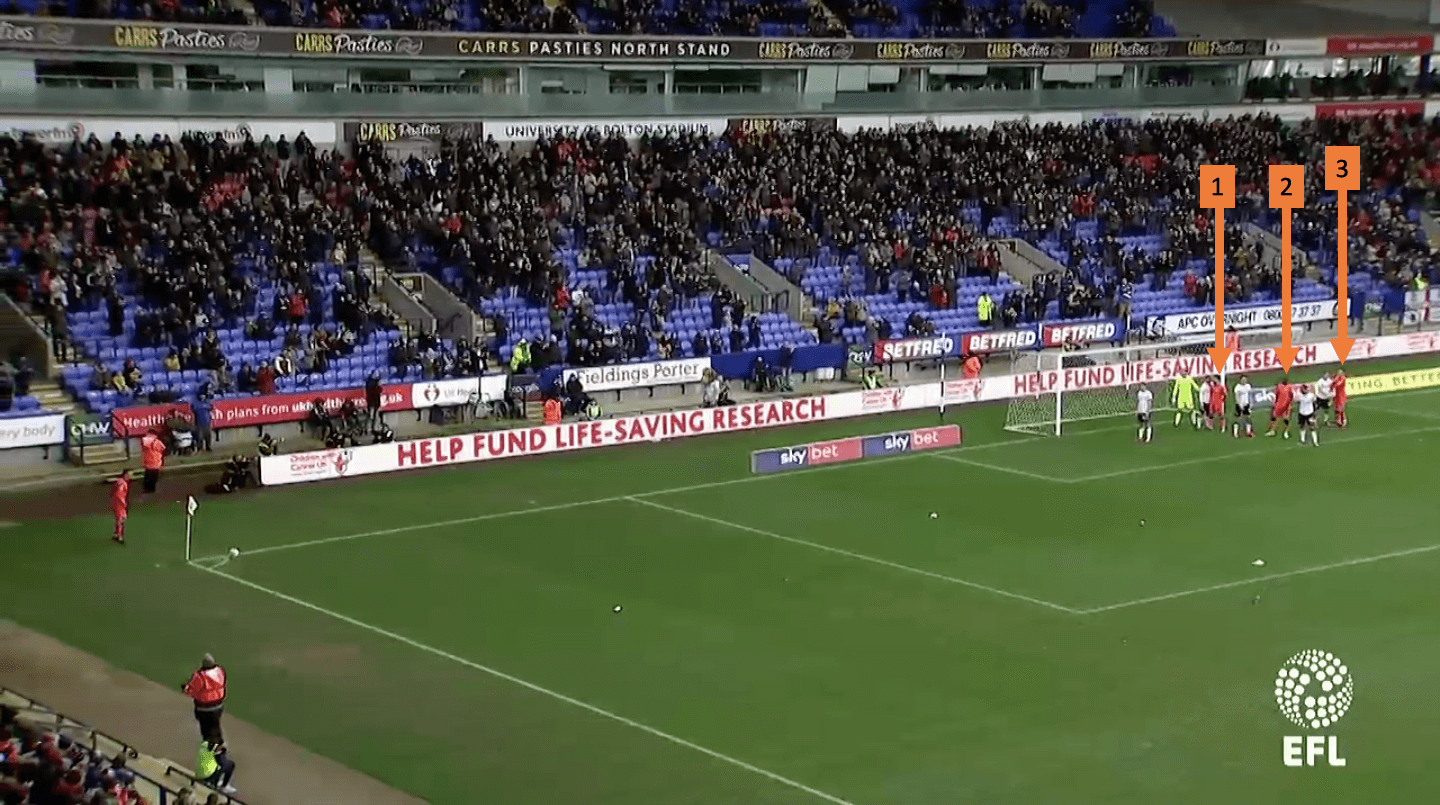 In the example above, the three players who start inside the six-yard box have positioned themselves around the back-post. 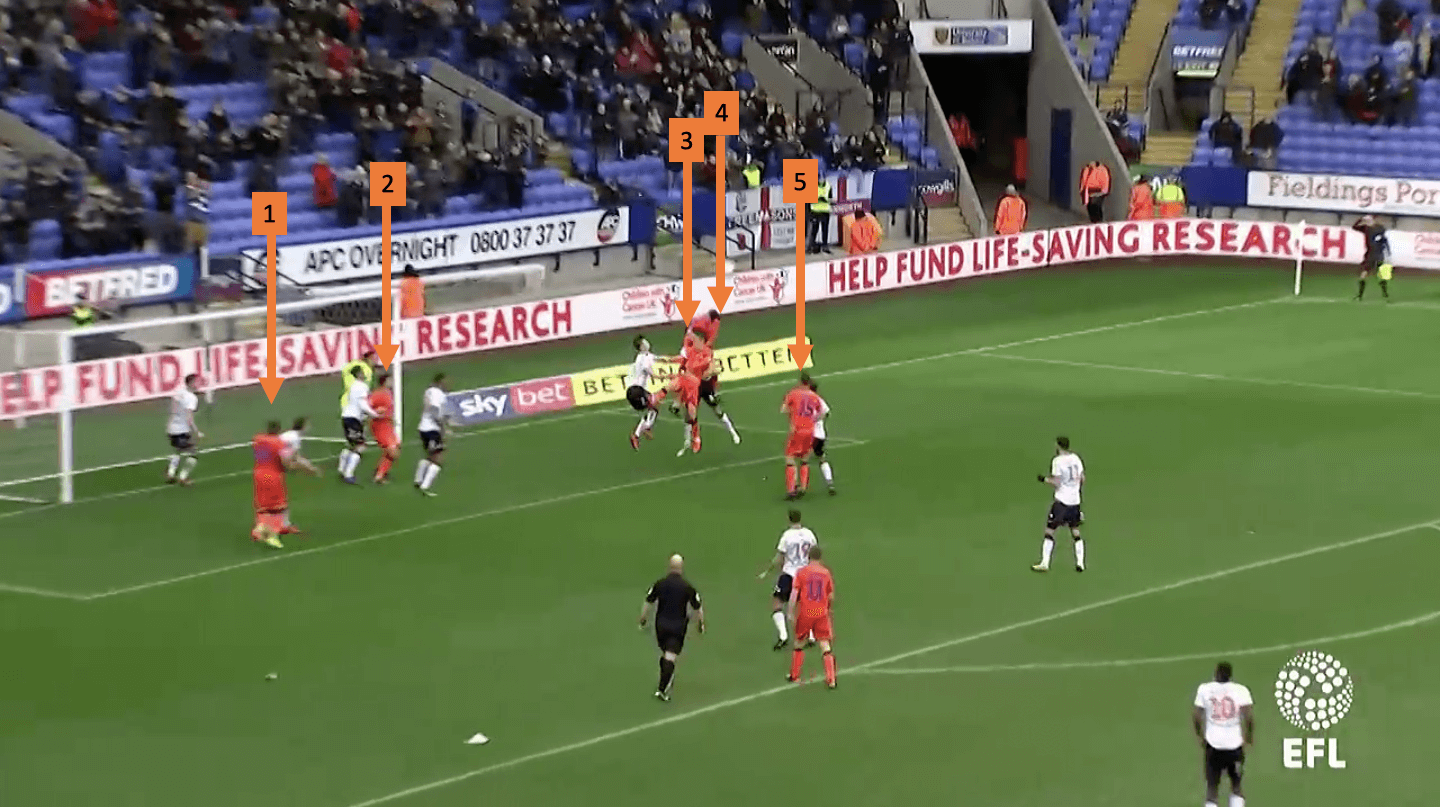 The corner is delivered towards the back post and Millwall now have two/three players attacking the ball at the back post. 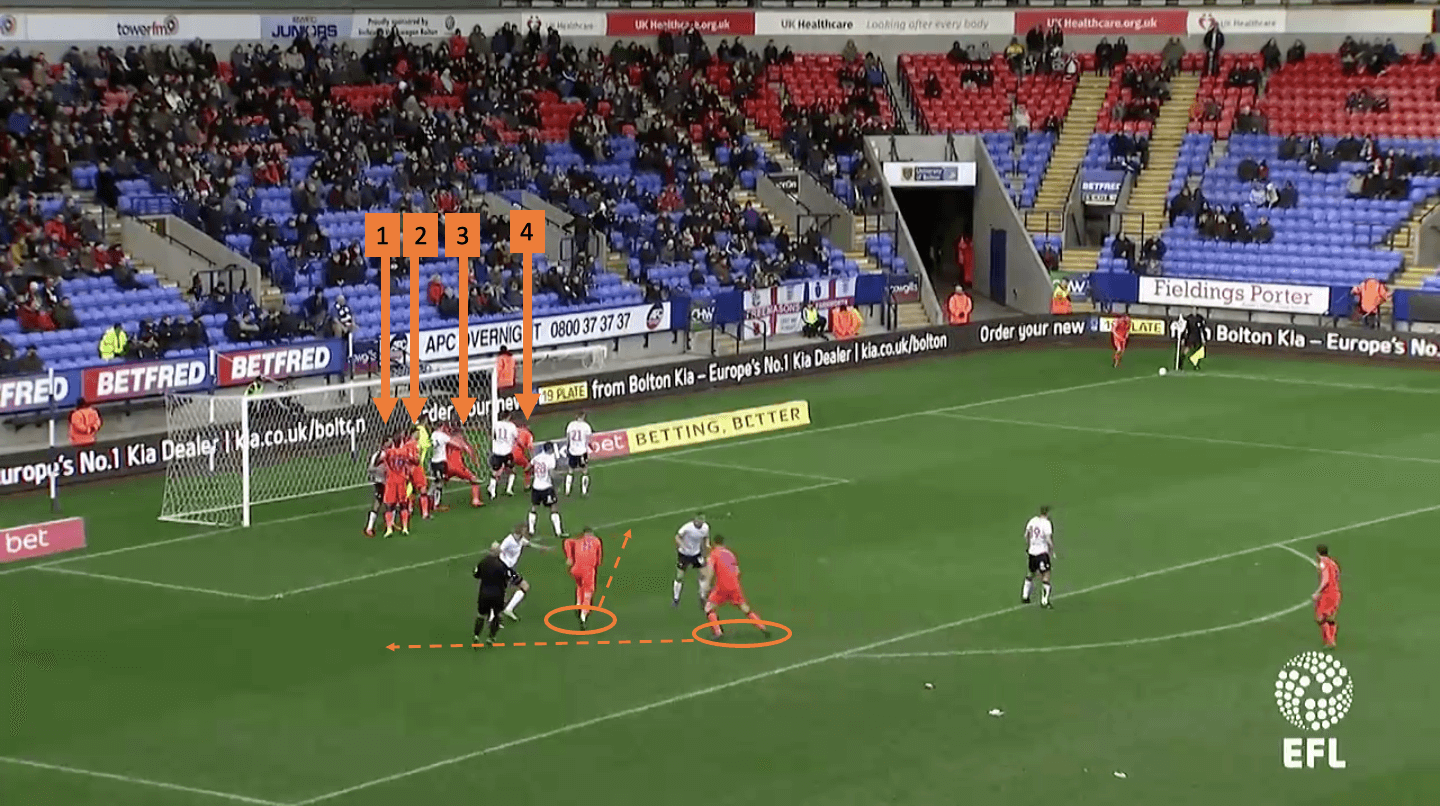 The movement of the two players attacking the ball from deep is however more nuanced than simply running in a straight line towards the goal. The two players start side by side before sharply cutting across each other. The further man from the ball makes a sudden change in direction and attacks the front post. The closest man to the ball curves his run around the back of the first man and then attacks the ball at the back post.

This causes confusion and again is intended to give the runner half a yard of space to get clear from their marker. In the image above we can see that the attacker moving towards the front post has already caught his marker flat-footed and is starting to break free. 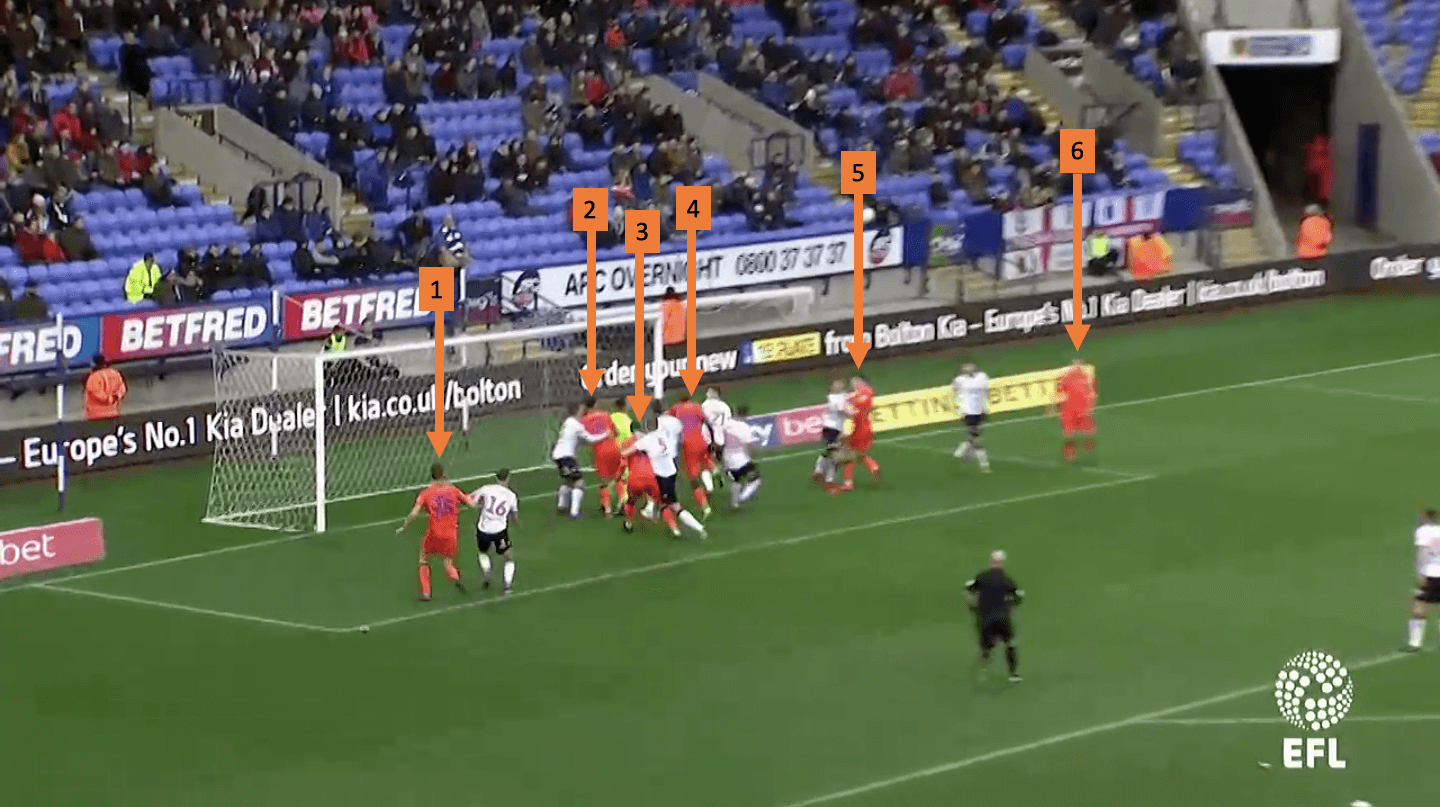 As a result of this movement, when the ball reaches the middle of the six-yard box Millwall have six attackers spread across the width of the box. This will prevent the goalkeeper from moving off his line and catching or punching the ball as there are too many bodies in his way. In addition to this, a simple flick-on is much more likely to end up in the back of the net from so close to the goal. Below is a similar example from the second-half. 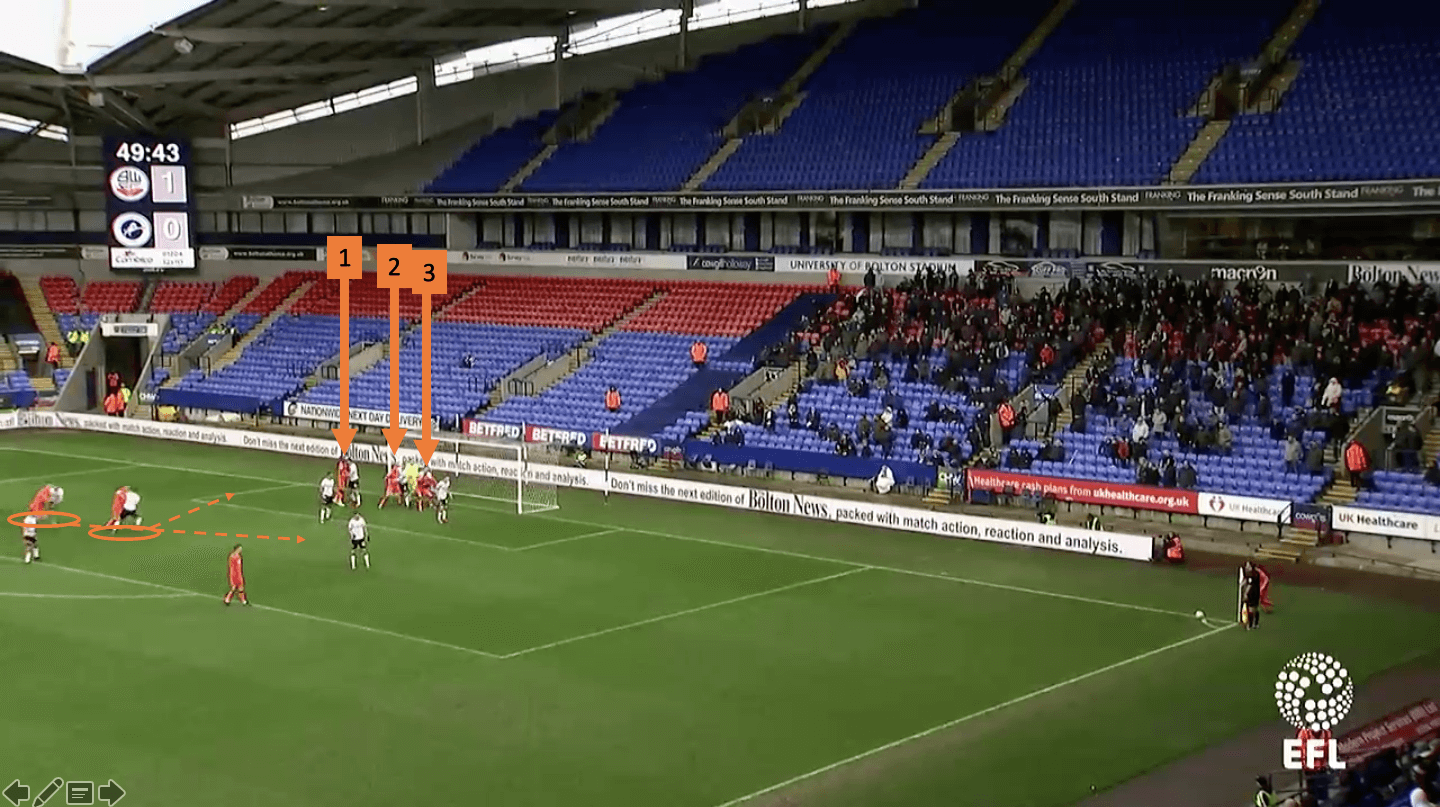 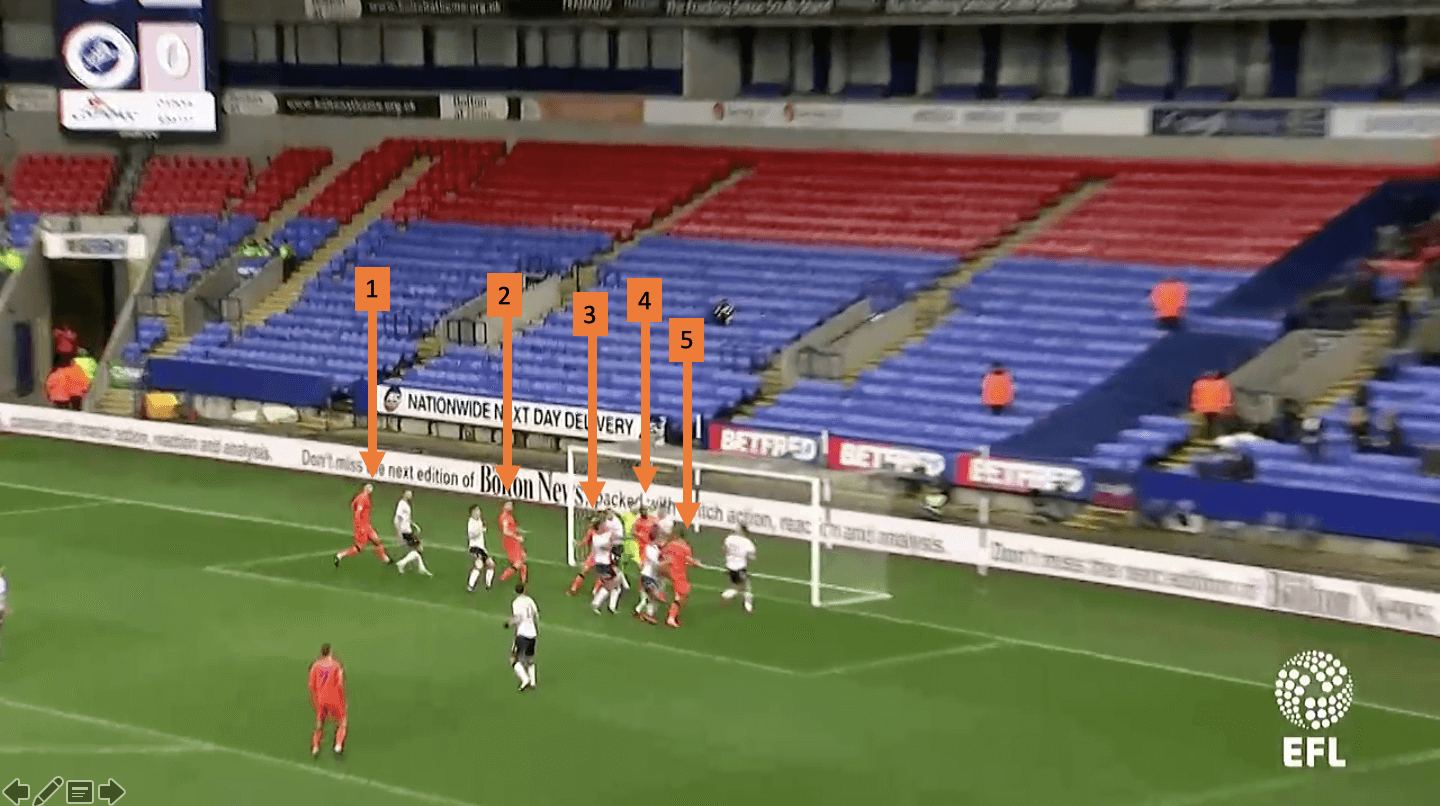 For a team like Millwall, set pieces are an invaluable asset. Having only scored 19 goals from open play this season, making the most of set-piece opportunities could be the key to staying in the EFL Championship.

What stands out to me is the obvious change in Millwall’s strategy from corners. There appears to be a conscious decision to change where Millwall aim their corners and this has resulted in a greater xG value for Millwall’s attempts from corners. It is always refreshing to see that a team has thought long and hard at how best to exploit such an underutilised weapon and Millwall are a great example of this.