Scouting the U17 European Championship….Part Two

The European U17 Championships have now come to an end, with France, perhaps unsurprisingly given the quality of their squad, coming out as champions of the tournament. Over the course of the few weeks that the tournament was on, things mapped out more or less as expected. The likes of France and the Netherlands, who contested the final, and Portugal and Spain impressed but there were also strong showings from the likes of Denmark and Serbia and good individual performances from those teams who were less successful.

This tournament is often the point at which players come into the spotlight in a wider context and from this point on, and there are a number of players who we will continue to track as they look to push on from this tournament and make an impact at first-team level for their clubs.

This is the second, and last article from me looking to identify some of the more interesting players at this tournament. If you want to go back and read part one, where I look at three players who caught my eye during the group stages of the tournament then you can find it here. This time I will pick out the two players who stood out the most for me throughout the tournament and who are my picks for player of the tournament.

The first player that we will discuss is the 16-year-old PSG midfielder Warren Zaire-Emery, a player who has already attracted significant interest from the likes of Bayern Munich and RB Leipzig. In the end, the decision came down to the player and the midfielder decided to stay in Paris and try to break into the first-team setup at the club.

If France is one of the greatest talent developers in the world game then Paris and its surrounding suburbs are the heartbeats of that developmental network. The sheer level of talent that is concentrated in that area of the country has led to a huge amount of interest and scouting in the area. With this talent hotbed right on their doorstep, you would expect the PSG first-team to be peppered by Paris born players who have grown up supporting their club. That is not the case, however, and despite the strength of their youth system, there have been issues with the pathways for young players breaking through and into the first-team.

There have been signs in recent months, however, that the club are looking to change that trend and the introduction of Zaire-Emery for some first-team exposure going into next season would be a big step in the right direction for them.

He profiles as an extremely modern central midfielder who is most comfortable in the ‘8’ position. In the attacking phase, he has the ability to carry the ball past opposition defenders, as we saw in the final when he picked up the ball inside his own half and drove forward with pace and power before winning a free kick in the edge of the Netherlands area. He has great core strength and balance and is difficult to force off the ball when moving forwards in possession. A large part of what makes him so dangerous though is the fact that he can shoot from range or find a creative angle to slip passes through the line and beyond the defensive line for attackers to move on to. 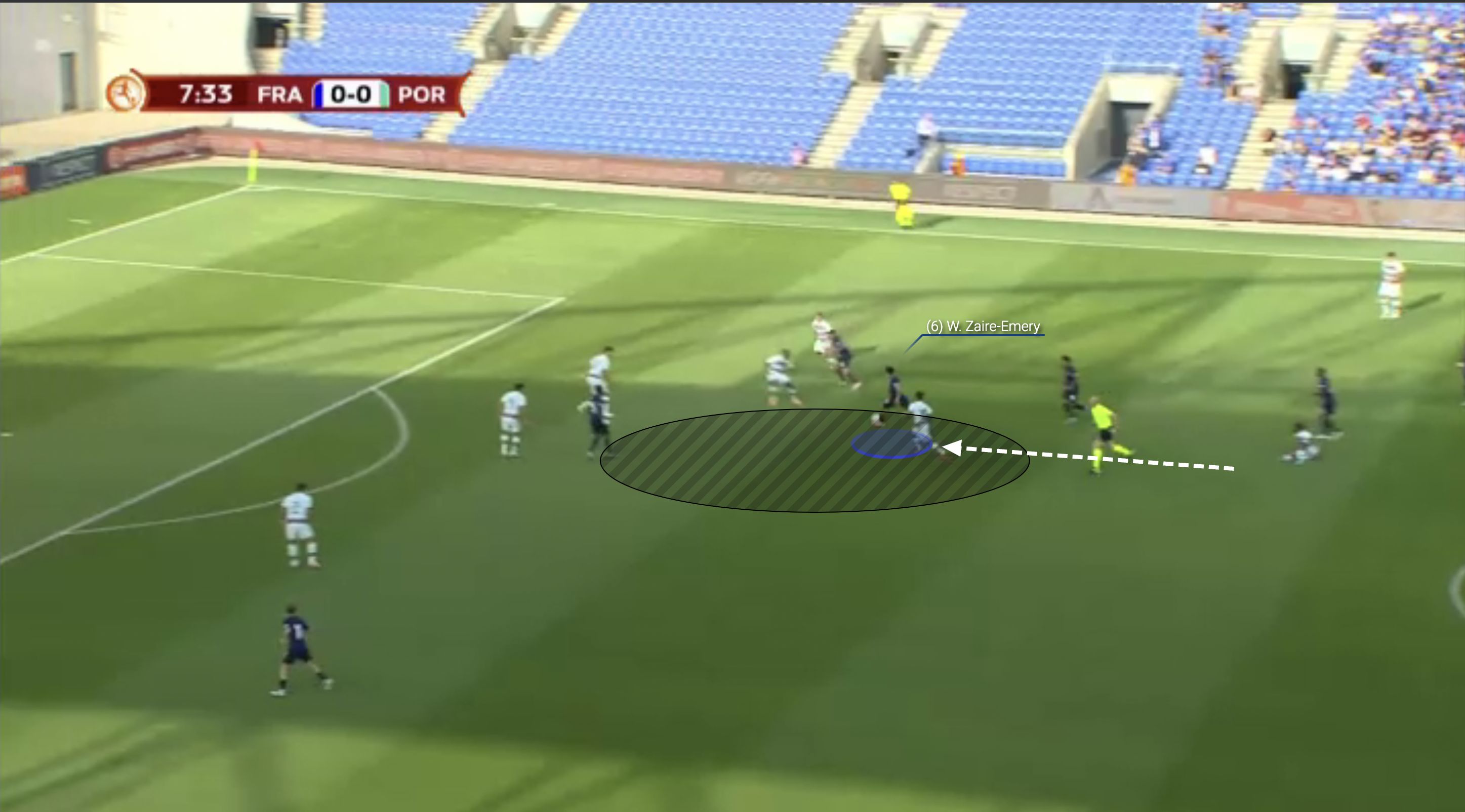 In this example, taken from the match against Portugal, we see Zaire-Emery driving forward again after taking possession of the ball just inside the opposition’s half of the pitch. He is a direct runner who tends not to rely on feints and tricks but instead times his touches and his movements well in order to glide past opposition players.

As he drives forward in this example all of the options ahead of the ball are passive, with the exception of the player to his right who is starting to make a run, as such we see the young midfielder unleash a powerful strike from range. 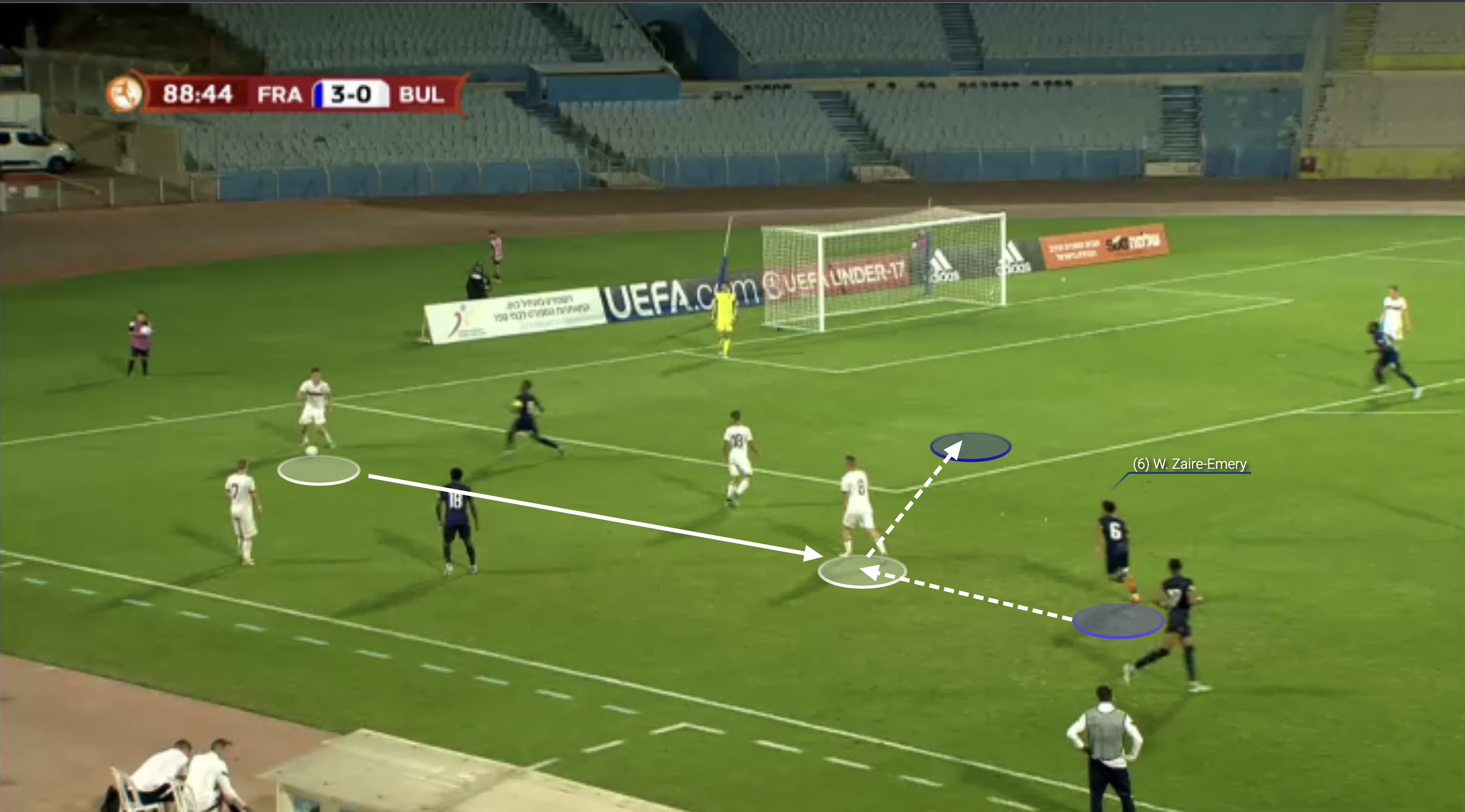 Zaire-Emery is also effective against the ball. He presses aggressively and tends to take good angles of approach when moving to engage the ball carrier. Nevertheless, this is not an empty threat as, when he does engage on the ball, he is active and capable of dispossessing the opposition ball carrier, starting an attacking transition for his team.

We have an examle of this here in the match at the tournament between France and Bulgaria. As the Bulgarian side are looking to play out from the back, we see the French apply pressure to the ball. The ball is played through the first line of pressure but the Bulgarian player receiving the ball is poorly positioned to be aware of his surroundings. Zaire-Emery is quick to engage and win the ball back before driving into the penalty area and finishing the chance.

Next season I would expect to see the youngster get some minutes for PSG, at least in cup games, as they have to find a way to create a meaningful pathway for him into the first-team.

There are few teams, if any, who are effective as Ajax when it comes to not only developing young players but in finding pathways to allow them to break into the first-team picture. Seemingly every season, we see Ajax lose talent as their better performers are targeted by teams from the top-five leagues as they look to build their own sides prior to the new season. This leads to a need to refresh their own squad year in and year out. Some of this is solved through recruitment into the first-team but the Dutch side will also promote from within and allocate a certain percentage of their minutes to youth players going into the next season.

Ajax also benefit from having their second team playing in the Eerste Divisie, the second tier of Dutch football. This allows them to give players from the youth team minutes against relatively strong opposition in order to aid their development.

One of the next players coming off the Ajax production line is the 16-year-old attacking midfielder Gabriel Misehouy. The youngster has already had links to the likes of Manchester City and Arsenal, amongst others but he is extremely highly rated at Ajax as things stand.

He profiles best as an attacking ‘8’ or as a ’10’ and his best football is played in the half-spaces and on the blind side of opposition defenders. Throughout this tournament, he performed well and became a real threat and danger for the Netherlands. He occupied pockets of space and his ability to make intelligent off the ball movements helped his team not only to progress the ball into the final third but to create threat and danger when they got into that zone. 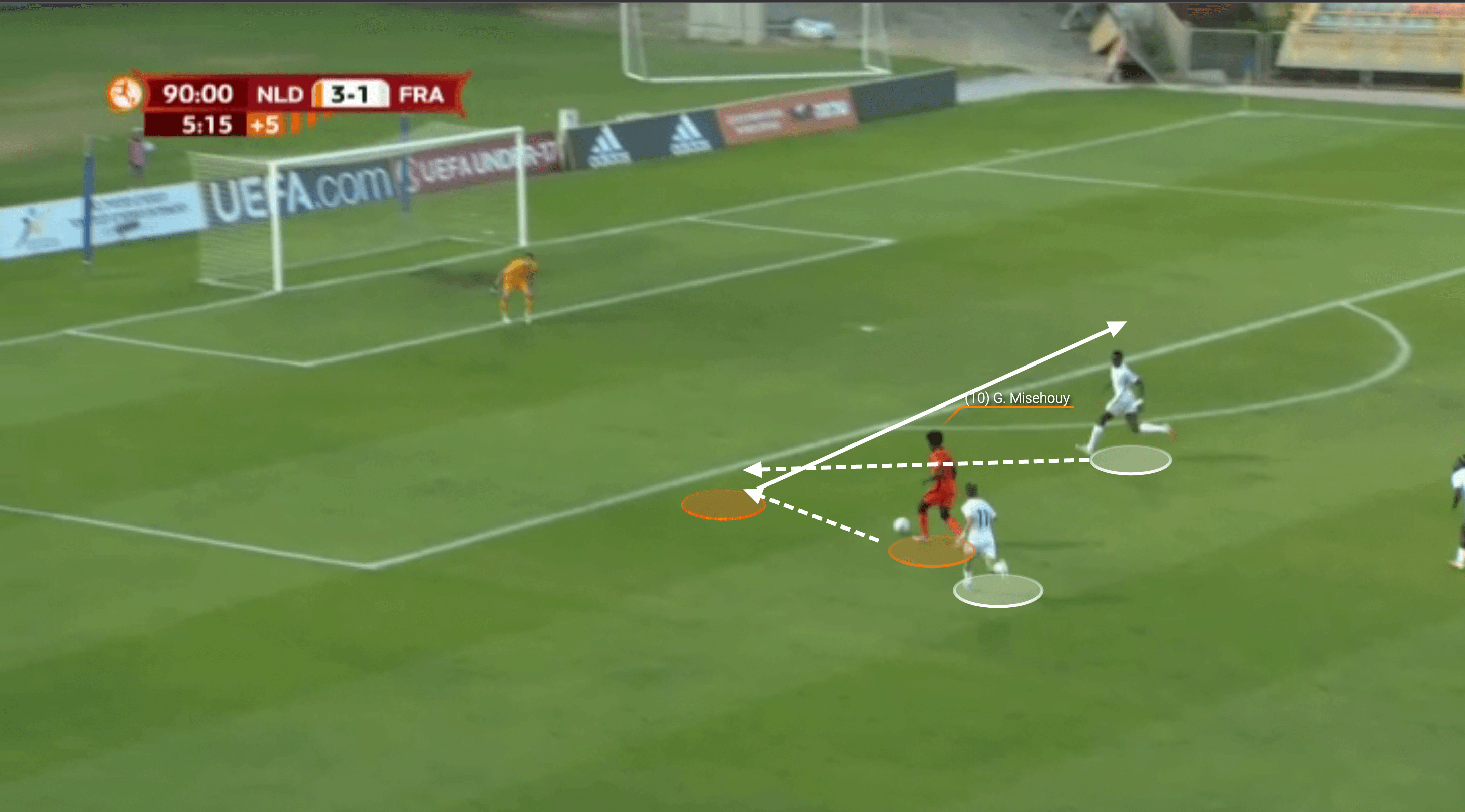 Misehouy is a hugely dangerous player when carrying the ball and breaking into the final third of the pitch. He has a low centre of gravity and great athletic profile and when moving in possession, he is typically elusive. What really stands out though is that for such a young player he has a very mature approach and outlook on the game.

In this example, we see a point from the match against France in which Misehouy is driving through the half-space towards the area. It would be easy in this situation for a young player to try to drive the ball at goal or to get closer. Instead, he allows the covering defender to get closer before cutting the ball back across and into space. 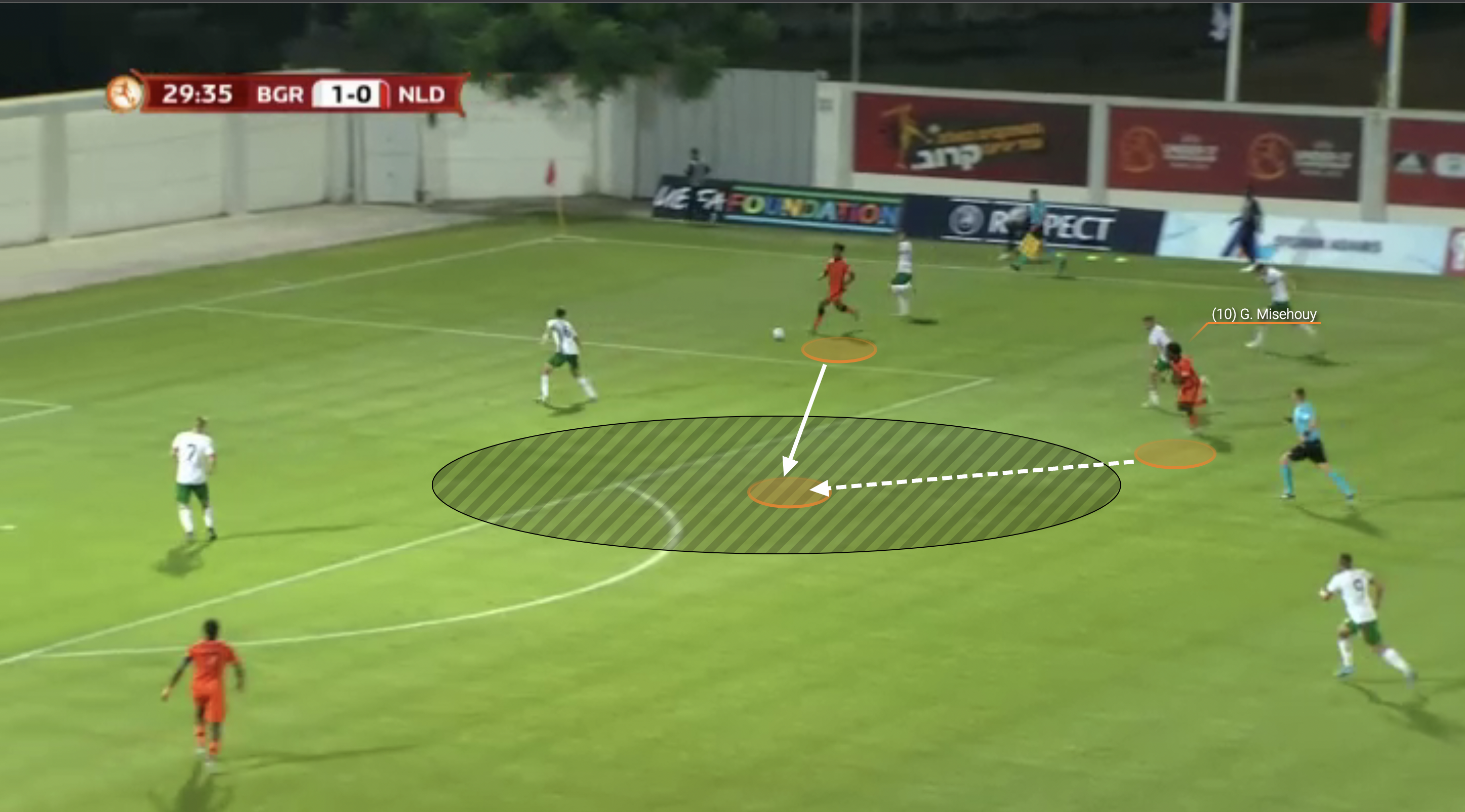 When moving off the ball Misehouy times his movements and breaks into space very well in order to drag players out of slots and allow him to receive the ball in dangerous areas of the pitch. Here we see an example from the match between Bulgaria and the Netherlands. With the ball, wide Misehouy is initially deep and on the ball side of the field but he times his movement almost perfectly to lose his marker and to drive into the space at the edge of the area.

His off-ball movements in particular are extremely dangerous and this speaks to his game intelligence and understanding of how to use and attack space in the final third. He is perhaps best described as an elusive attacking player, he is particularly strong when moving off the blind side of opposition defenders, he times his movements and jumps or drifts as the opposition player’s attention is attracted either towards the ball or towards another attacker. He will then move quickly into an area in which he can receive the ball.

Going forwards I would expect to see Misehouy feature next season for the Ajax first-team but it is entirely possible that those transfer links to top 5 clubs will resurface.

It can be difficult to accurately scout youth international tournaments. For all that there are players who have impressed in these tournaments historically, the rate at which these players go in to become established first-team players is not that high. It is important to try to understand the performances of these young players in the context of both their own age and development and the development of football as a whole.

Both of the players discussed in this article though have profiles that fit perfectly with the modern game and given their already developed technical base, I believe that they will make the transition to first-team football without too many problems.