Tanguy Nianzou is a name that will be familiar to many fans of the Bundesliga — or, for that matter, people who in general just like to keep tabs on Europe’s most talented youngsters. For this is exactly what Nianzou is. The French centre-back, who at 19 years old stands at 1.91 m, or 6’3”, in height has a big role to play in Bayern Munich’s future. Niklas Süle’s impending departure for German rivals Borussia Dortmund, and David Alaba’s departure last year for Real Madrid have left a hole at the back. Initially filled by the signing of Dayot Upamecano, Nianzou is clearly being developed with an eye to moving into a starting role in the not-so-distant future.

After inconsistent minutes throughout the season, Nianzou found himself gaining greater game time as the season wore on, with him finishing strongly. There is a distinctly French edge emerging in the German champions’ defensive corps, with Nianzou playing alongside the aforementioned Upamecano, as well as World Cup winners Benjamin Pavard and Lucas Hernandez. Whilst Upamecano is just 23 himself, and with Nianzou as a 19-year-old, Bayern have to be careful pairing an inexperienced centre-back duo too often, but this is clearly a partnership they are looking to build their future around.

Nianzou is a very well-rounded centre-back. Technically, he is strong, consistently showing a composure on the ball that is a byproduct of his outstanding passing ability. However, he is an aggressive defender with exemplary timing on his tackles and incredibly impressive athleticism to cover distances quickly and change direction efficiently too — but more on all of this as this analysis continues. This tactical analysis and scout report focuses on Nianzou’s strengths and perhaps some areas for development, whilst showing how he fits into Bayern Munich’s tactics.

Taking a look at Nianzou’s average positioning on the heat map, we can begin to get an idea of his tendencies. Naturally, the vast bulk of his actions come inside his half where he often sits in a deeper position during build-up play and anchors periods of possession from this vantage point. However, we can see that there is a healthy amount of action occurring just inside the opposition half too. Nianzou is a positive player that can be a touch cavalier with his overall positioning. Whilst he is confident carrying the ball forward, he will also push into more advanced positions in advanced possession phases; equally, he is confident stepping out and engaging an opponent well inside their half in moments of transition. 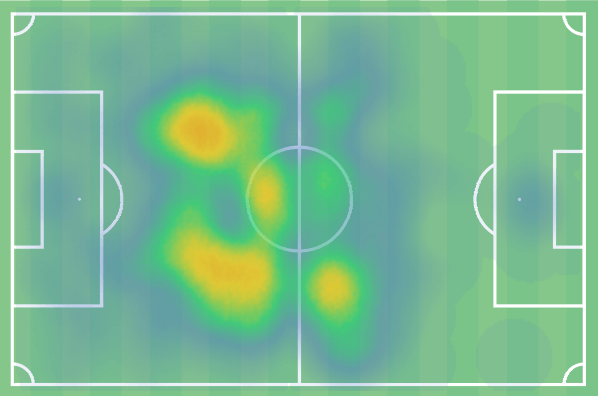 We can also see that he is versatile in that he can operate as a right-sided or left-sided centre-back.

With an overall 94% pass rate and a 62.5% completion on his long passes, Nianzou is a reliable and very active passer during Bayern’s build up phase who enjoys sitting in a deeper position where the ball can be recycled to him and from where he can circle possession.

He is comfortable playing as part of a centre-back pairing but equally, he can operate in the middle of a back three where he can anchor play. He switches the ball at a decent tempo, frequently off of limited touches, scanning before he gets on the ball. 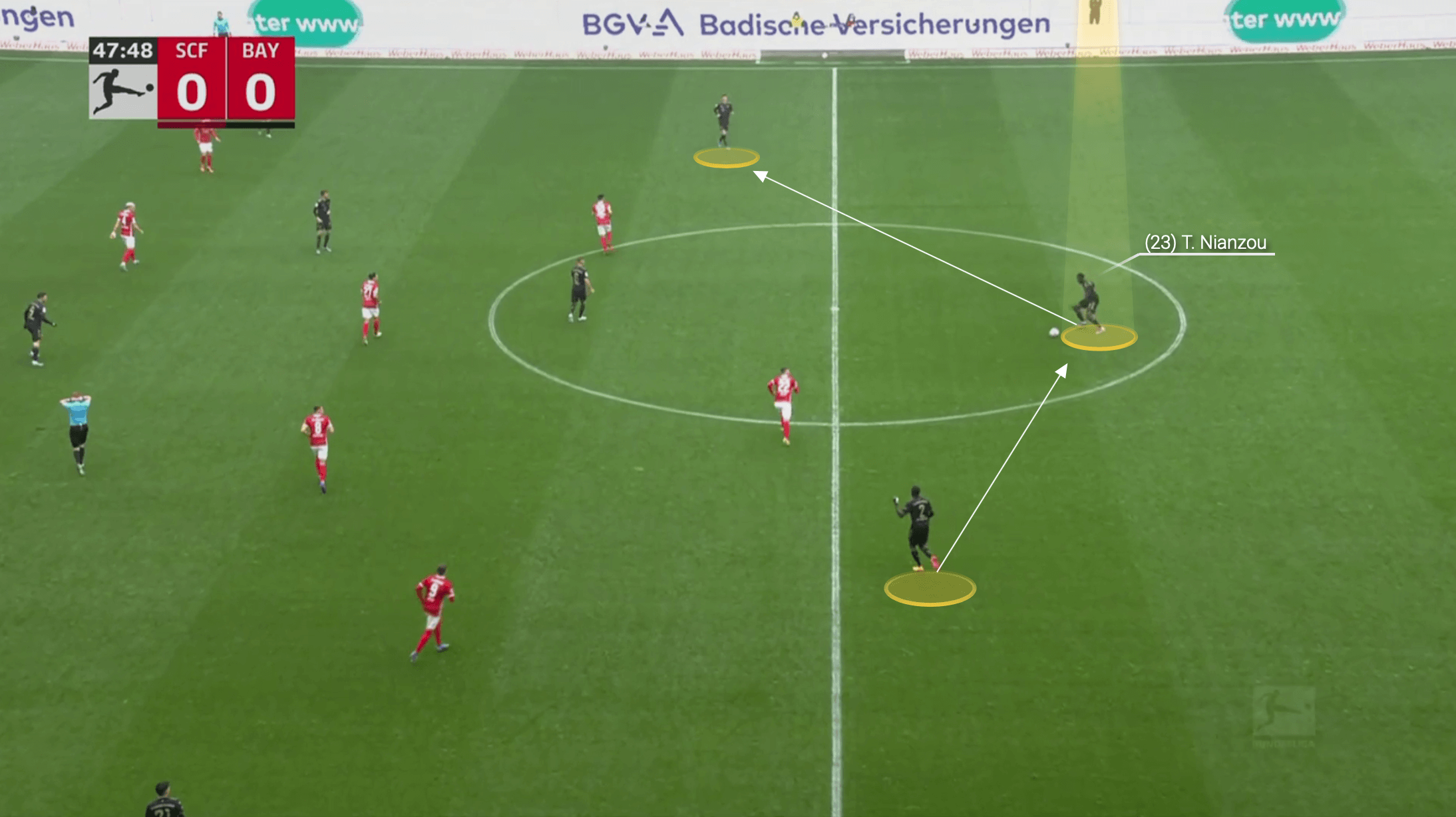 He has real quality on his long passing, particularly when looking to hit the ball diagonally. Nianzou will confidently loft the ball towards the opposite flank, nearly always placing the ball in front of its intended target so they don’t have to check their run. In the following image, we can see him taking a typically aggressive position in the possession phase, receiving the ball well inside the opposition half before striking towards the left flank. 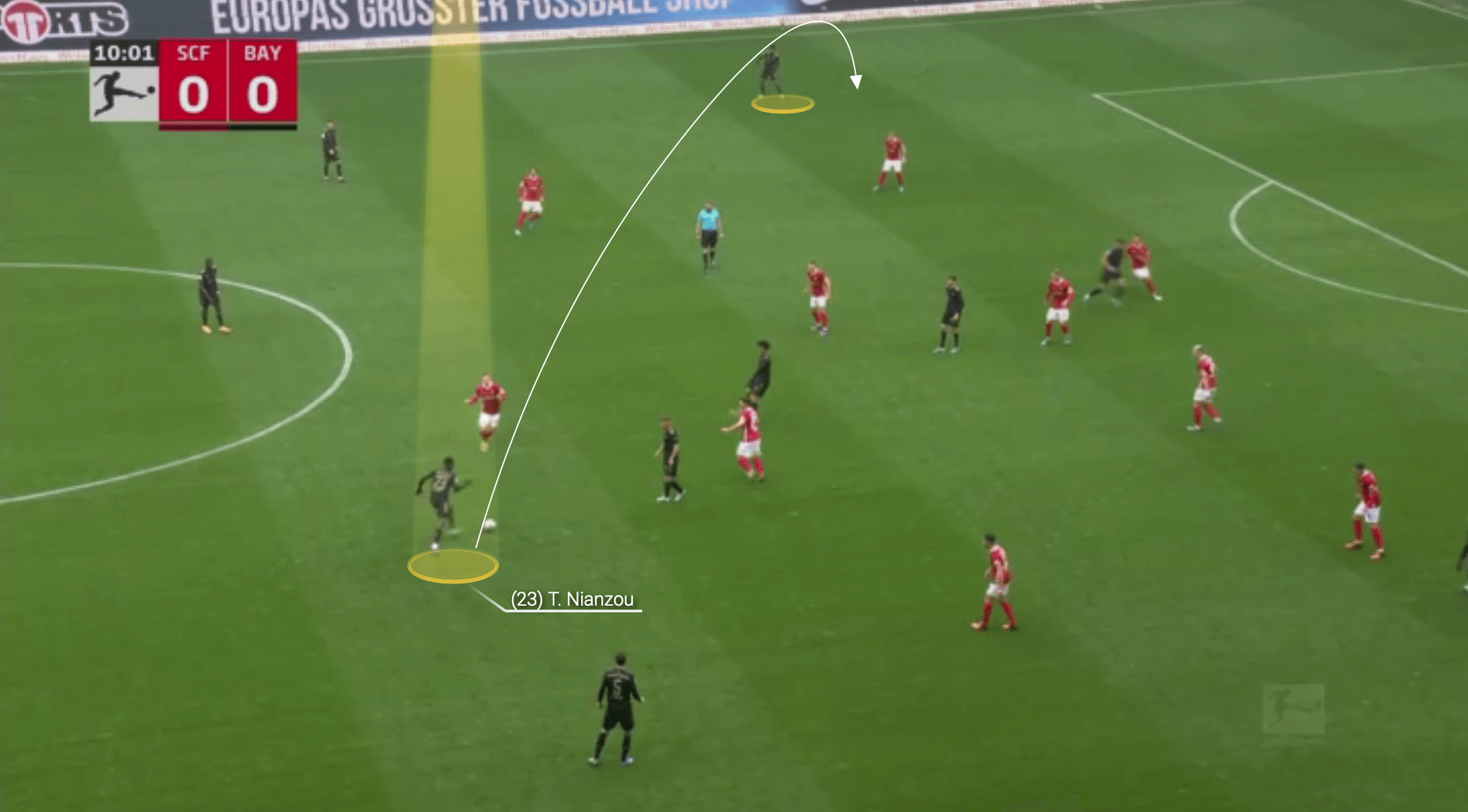 Nianzou makes the decision to play forward quickly and doesn’t take many touches in the process.

The next image shows him scanning as the ball is travelling towards him. He immediately takes an aggressive touch out of his feet, already knowing where his second touch will go. 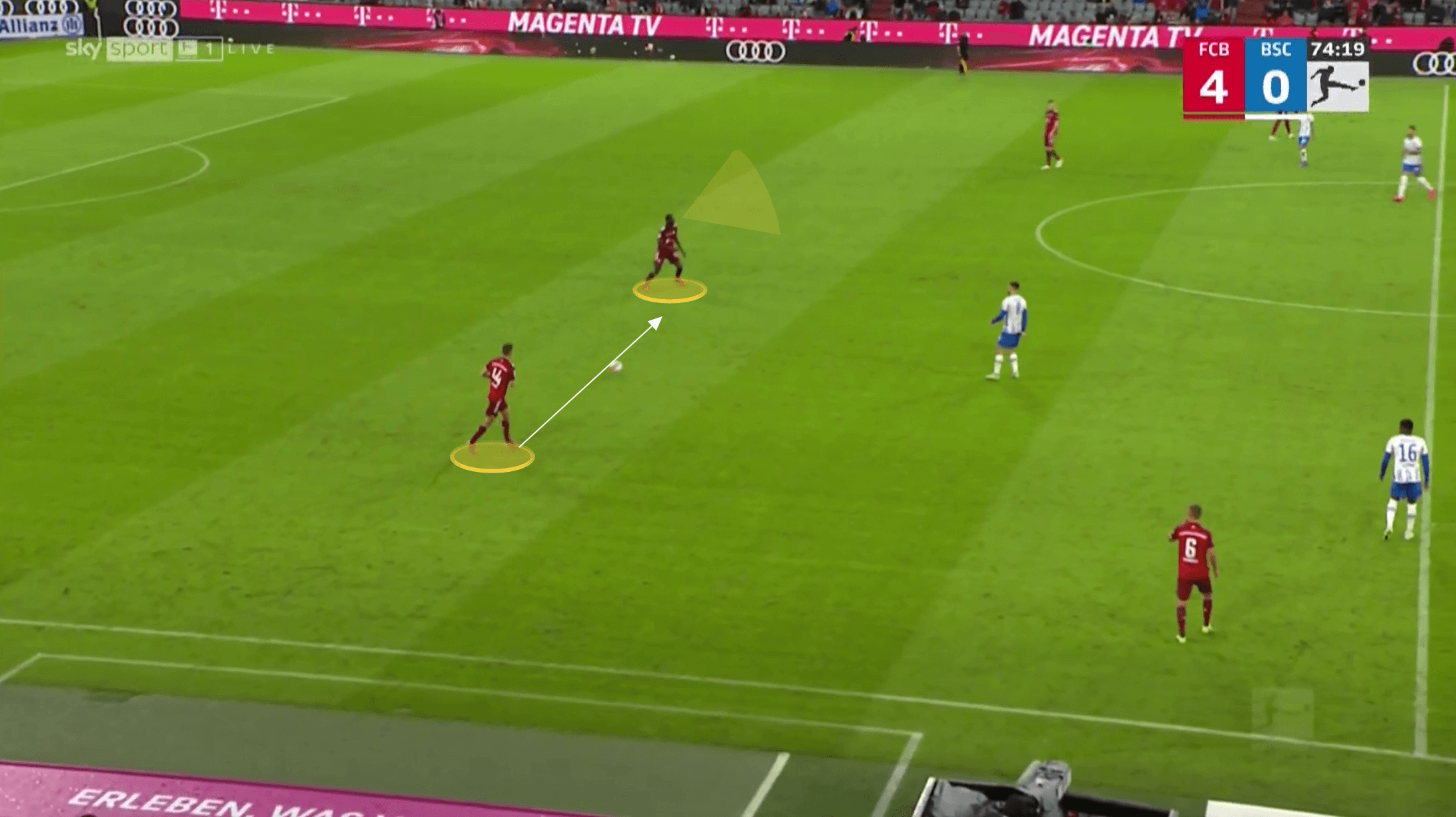 One touch later, he drills the ball towards his left-winger on the far side. He consistently makes these decisions at such a pace that the opposition defence will struggle to adjust or an opponent can react to cut these passes out. 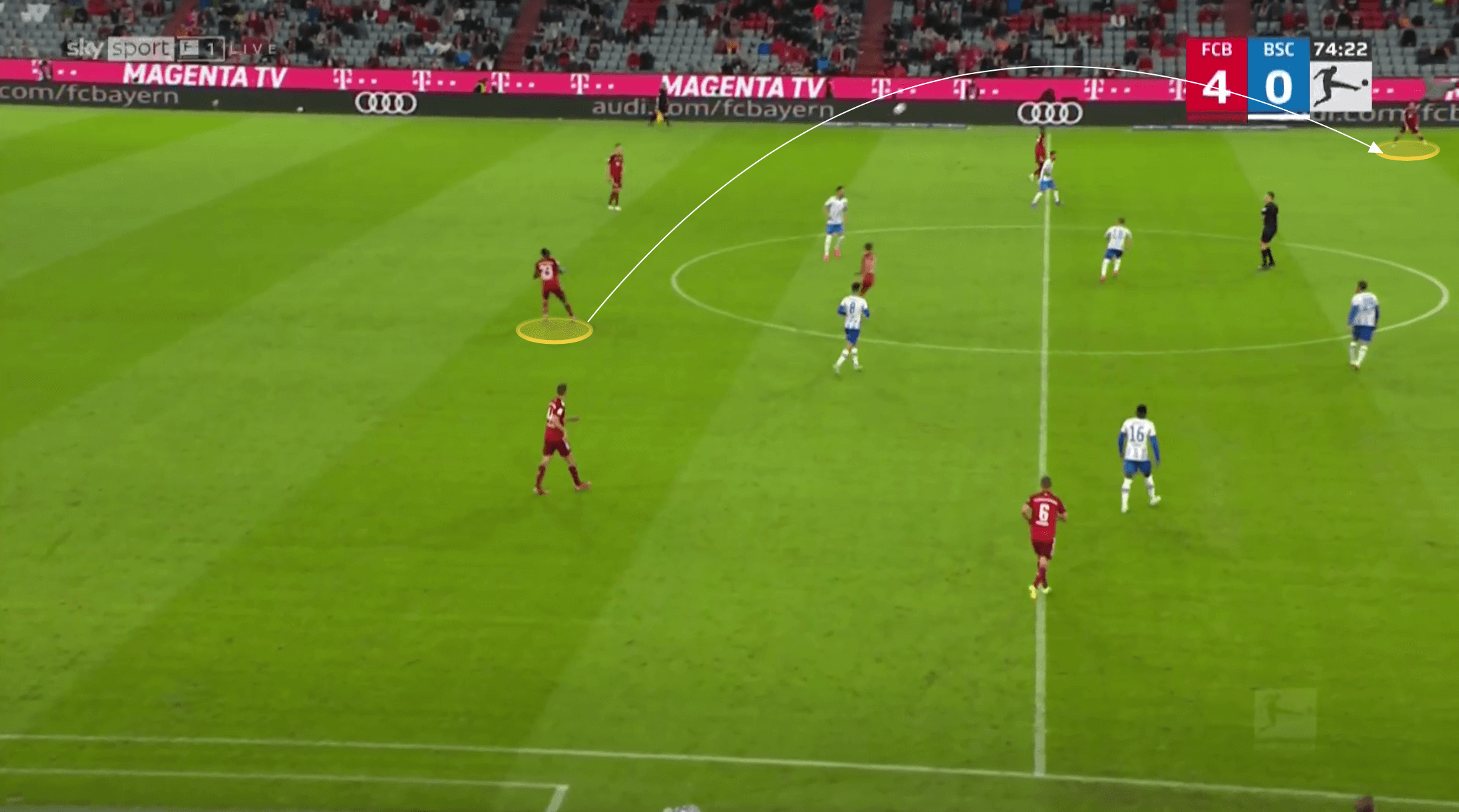 Nianzou doesn’t regularly dribble, at least not in a way that would come up on a statsheet. He has averaged 0.85 dribbles per 90 this season with a very impressive 63.6% completion on these efforts. However, he will dribble to carry the ball forward and progress the ball. Nianzou often takes the ball deep inside his own half and will bring it forward in an upright body position as he looks to play a pass. 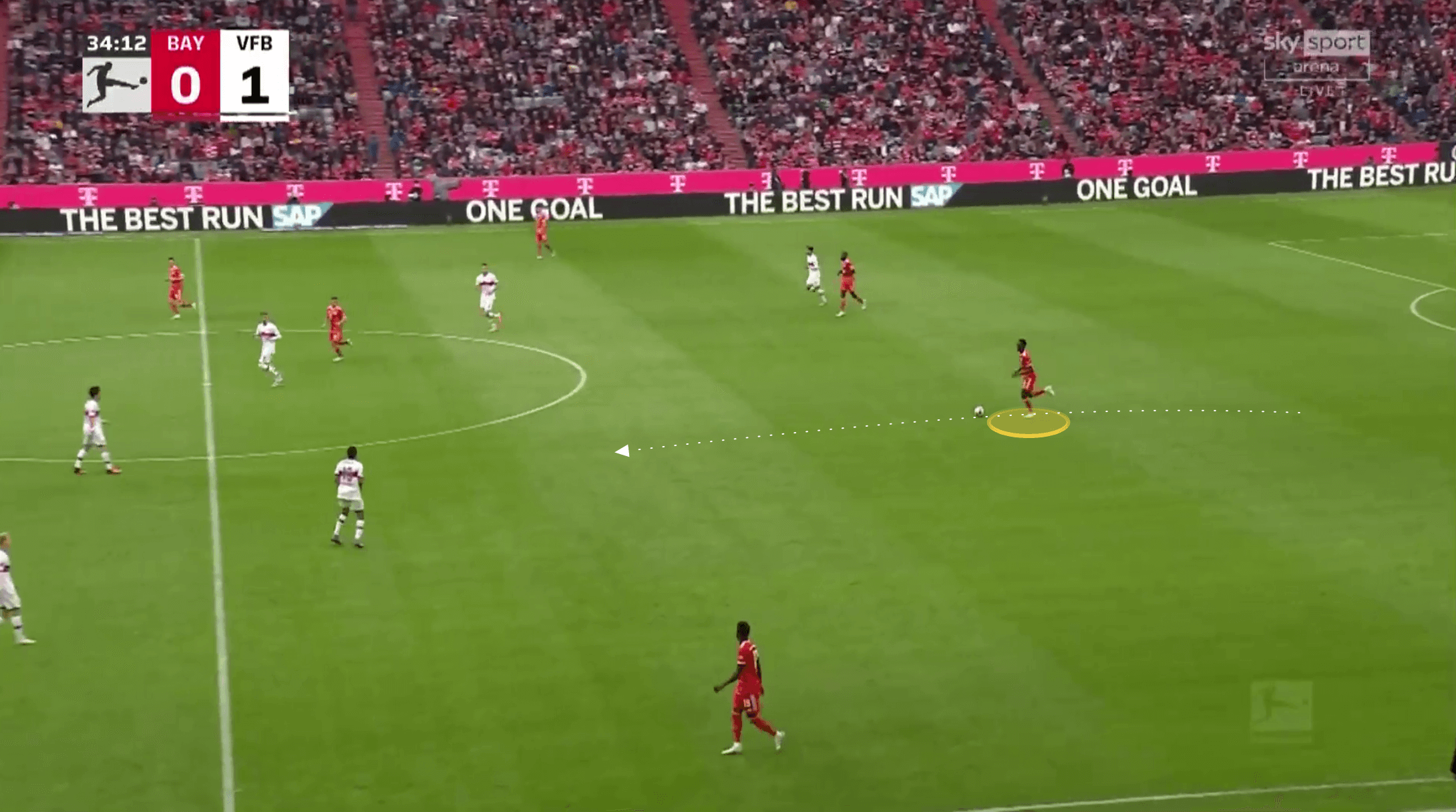 At the very least he is confident doing this, yet Nianzou is strong, he has very good ball control, and he has a sharp change of pace. On the occasions where he does dribble to take on a player, he is very effective, and this is something we may well see him grow into doing more often as he matures as a player.

He generally uses his dribbling when receiving and finding himself immediately under pressure from the opposition. Below we can see him receiving a goal kick straight to feet. As he gets on the ball and turns to face the opposition, he finds himself surrounded straight away by two defenders. Rather than panicking on the ball or quickly striking the ball forward to clear it away from pressure, Nianzou instead drops a shoulder to his left before shifting into the space between the two opposition players. 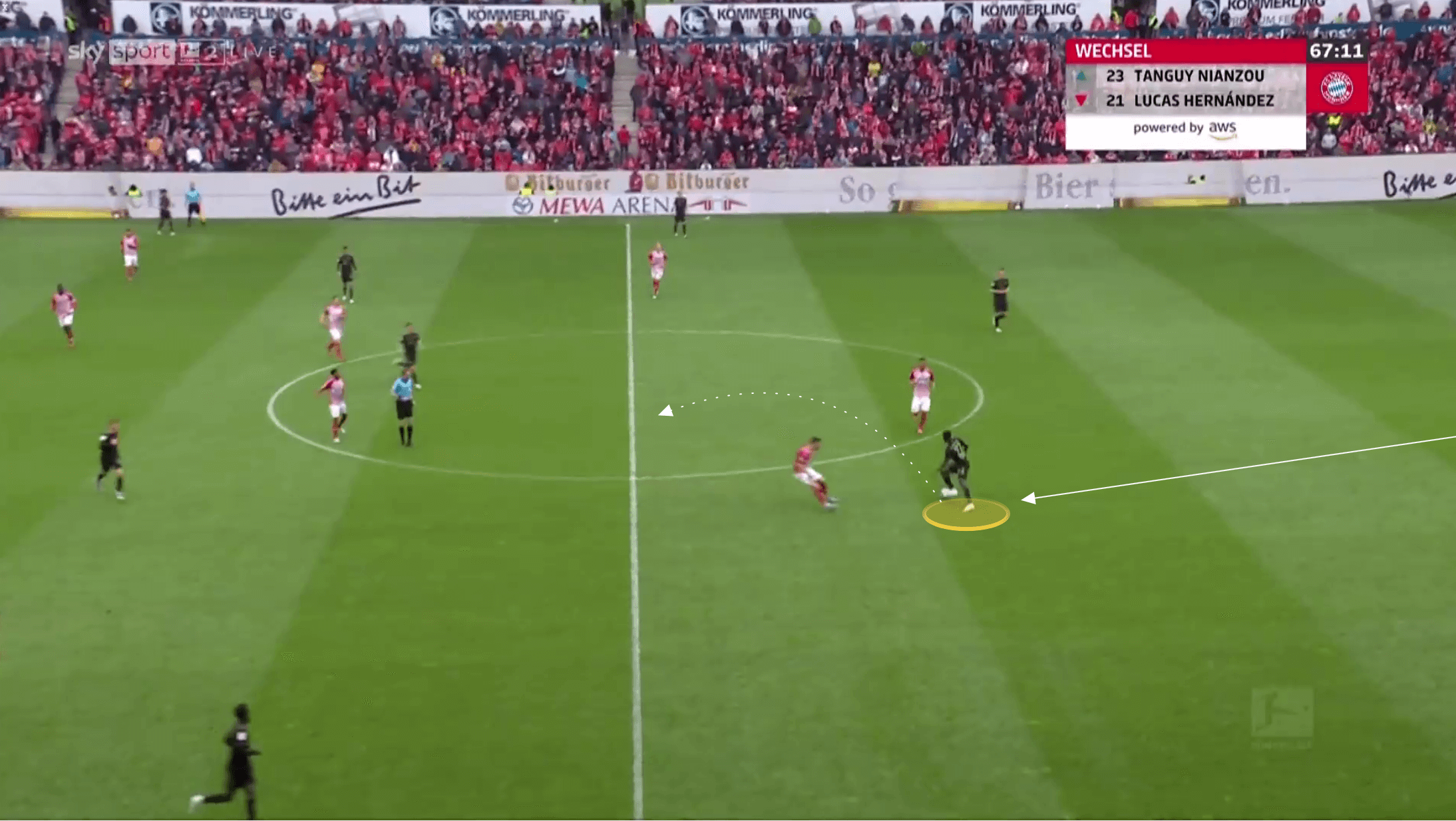 We can see him doing something similar from the same game as he receives under pressure once more, albeit this time from a back pass. Nianzou drops his shoulder once more before breaking away to his right. He doesn’t overrun the ball when he dribbles and after completing the dribble, looks to lay the ball off to the nearest open nearby teammate. 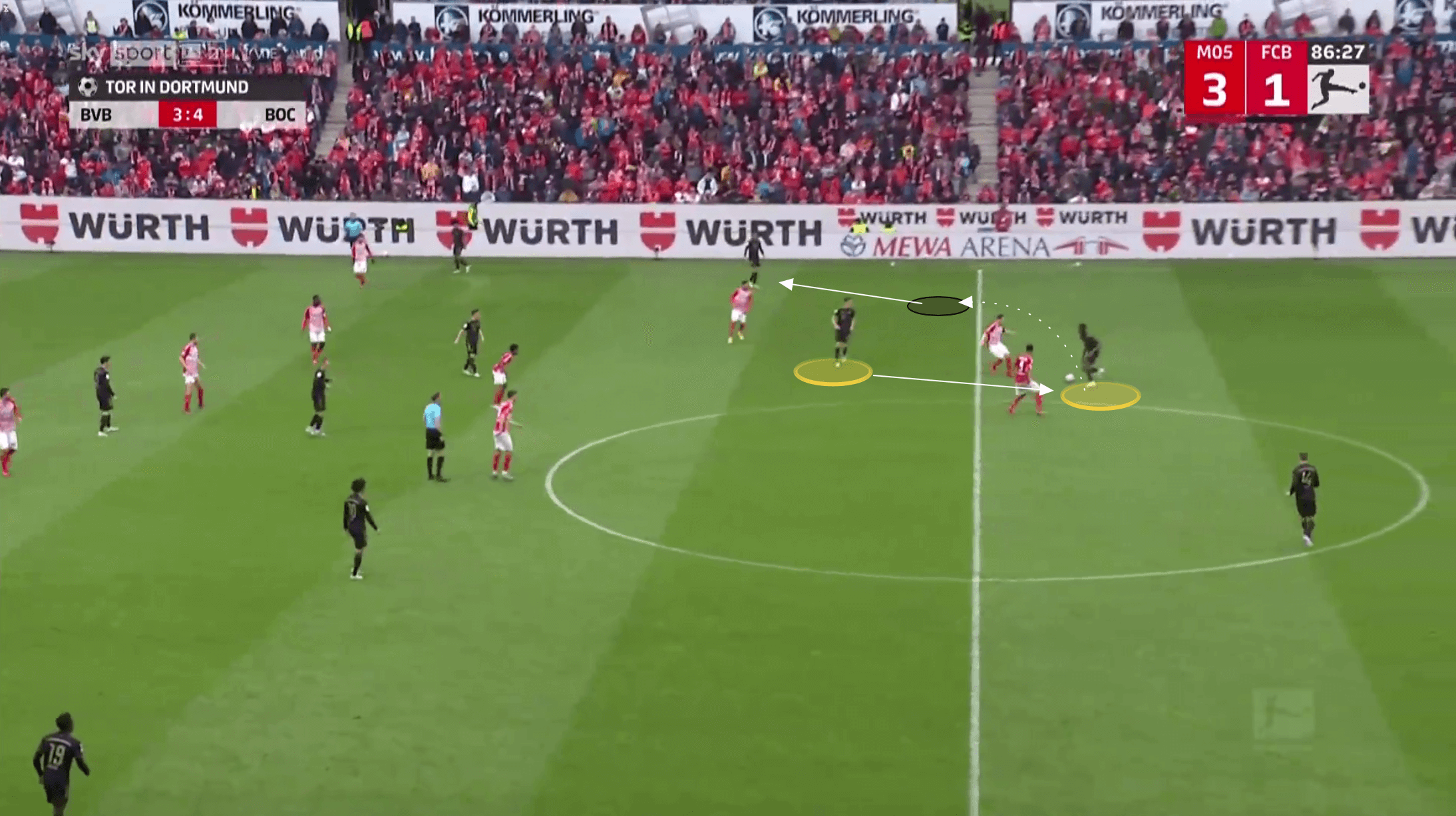 Nianzou has room to grow with his overall win rates both aerially and in ground duels. His defensive duel win rate from this season has been 59.8% on 7.09 defensive duels per 90 whilst he has won 63.9% of his 4.7 aerial duels per 90.

Despite these uninspiring win rates, Nianzou shows glimpses of real talent in both areas of his game and this could well be somewhere his game takes great strides in the future.

Firstly, he unsurprisingly shows good technique when approaching 1v1 duels, getting side-on and low-down. He looks to dictate where the opponent drives, but given the space he often leaves between himself and the ball-carrier, he can struggle to enforce this.

We can see this pattern occurring in the following image as the ball-carrier darts inside away from the side Nianzou is showing him. 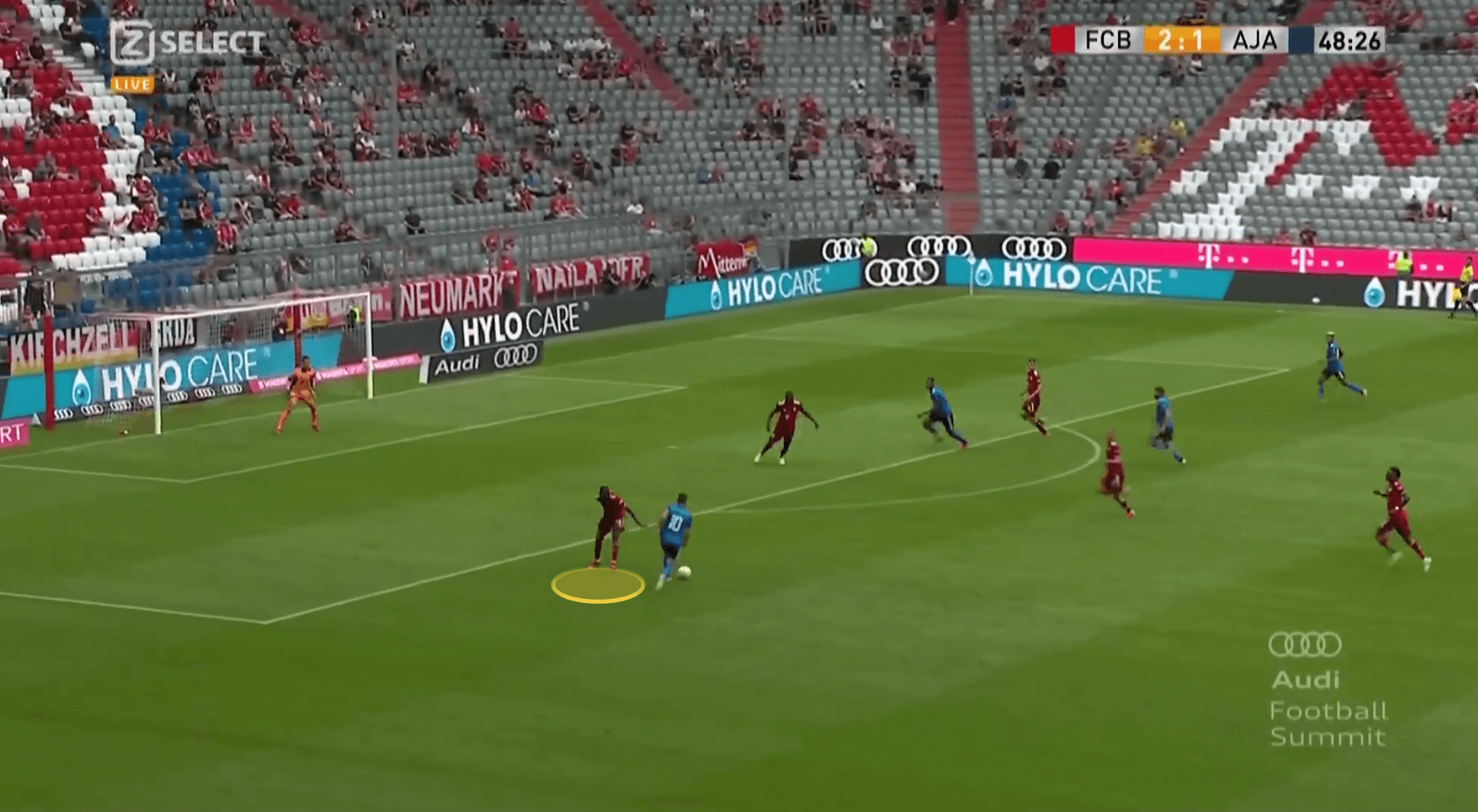 However, one of Nianzou’s greatest strengths as a defender is his ability to shift direction well and continue to apply pressure. In this particular pattern of play, the ball-carrier changes direction once more. Nianzou not only changes direction efficiently again but also wins the ball as he does this. 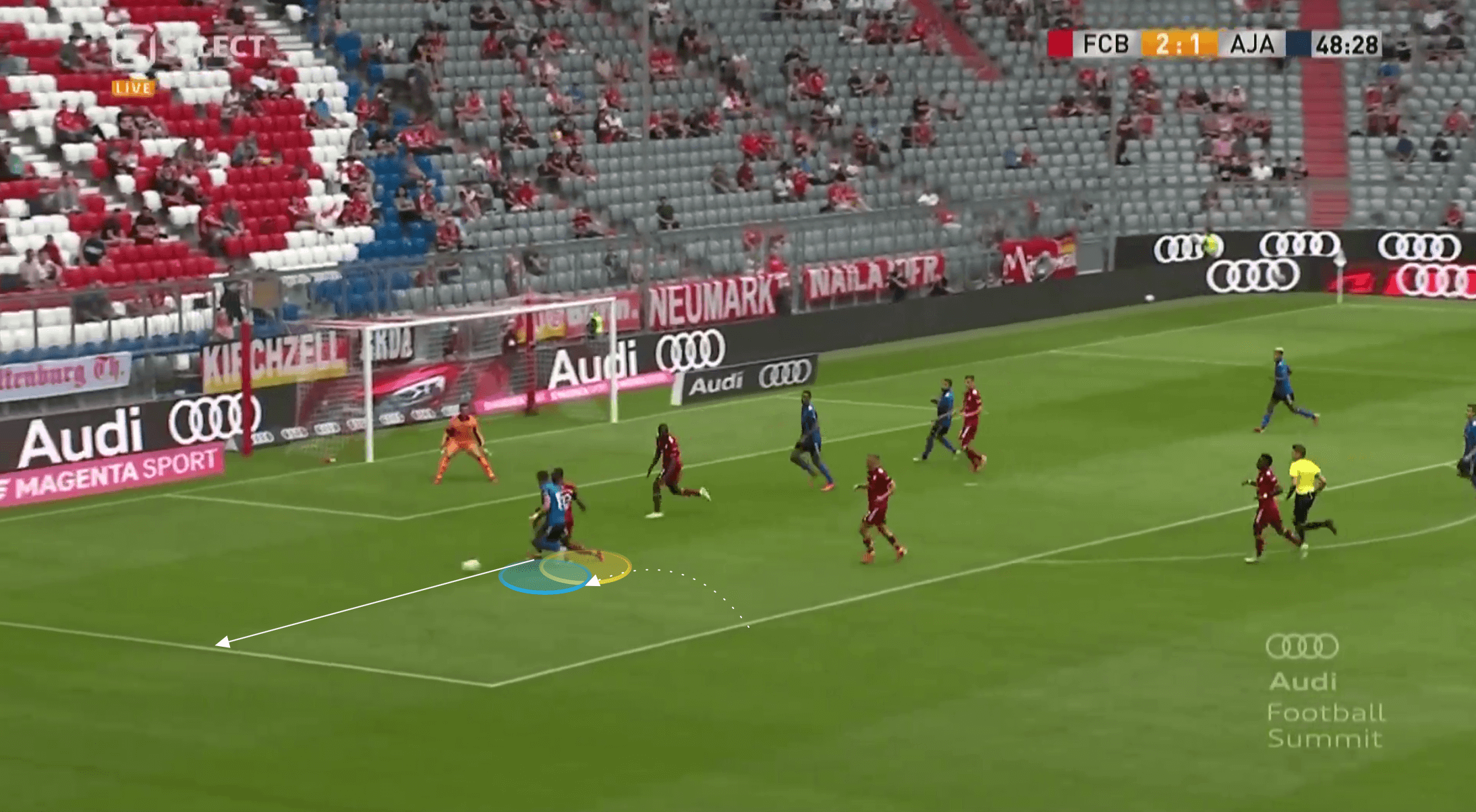 He does have a slight tendency to lunge in at times, and he will fully commit himself to a challenge, even around his own area, which of course brings its risks. There are moments he shows elements of clumsiness but equally, he can display outstanding timing when seeking to win the ball in this way.

We can see him getting to the ball in the following image as the Leverkusen attacker drives down the line, perfectly intercepting the ball and winning the tackle on the edge of his area. 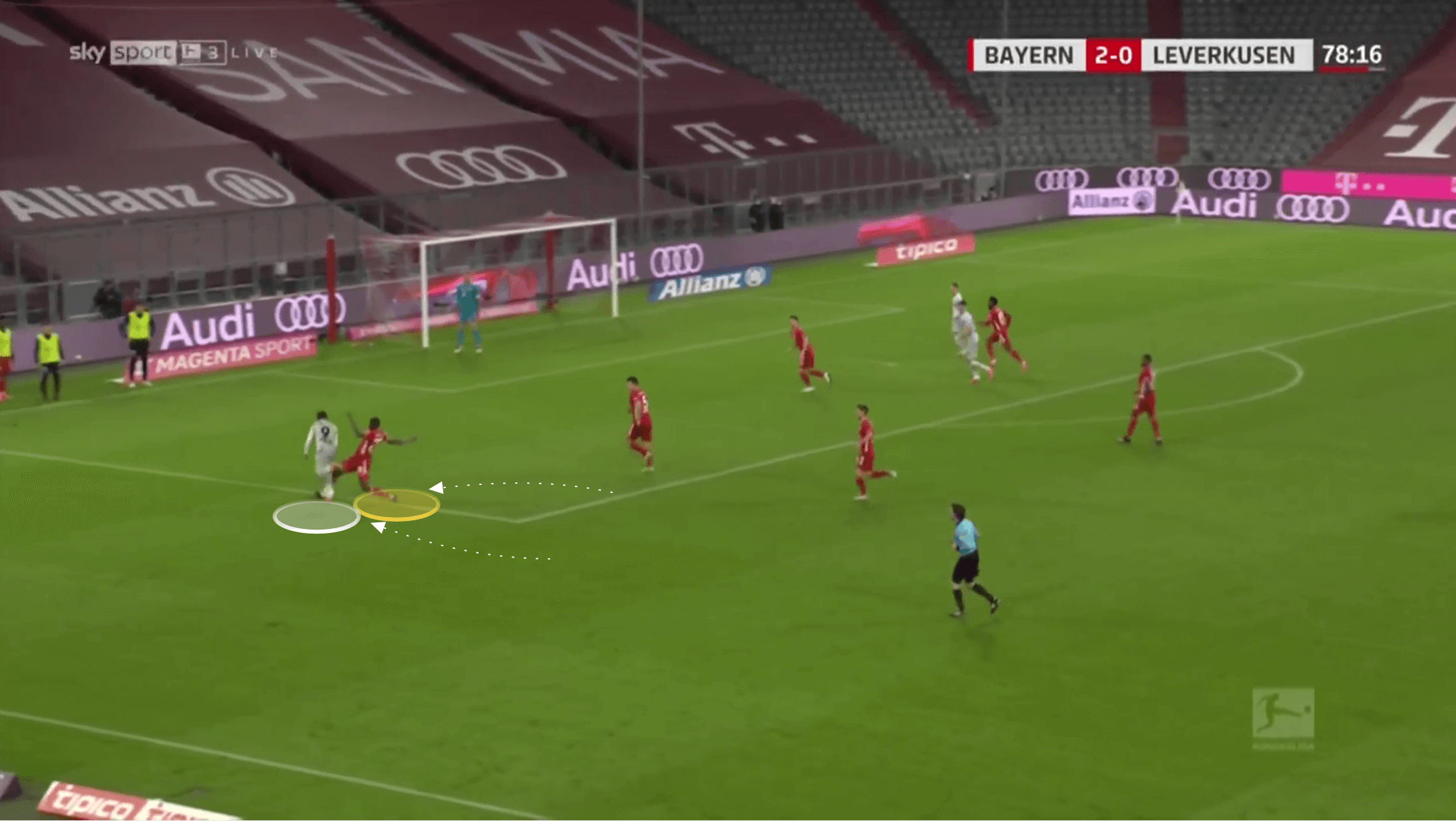 He does have some issues with positioning on occasion. This isn’t a frequent occurrence but happens enough where it is a part of his game in which his decision-making needs to develop, and this side of his game should potentially be limited. Nianzou is very aggressive at times in stepping forward to engage an opponent and given his slightly below 60% completion rate, this isn’t necessarily the best option.

We can see an example of the issue occurring in the next image, with Nianzou coming well out of his defensive line to press the opponent, leaving a large space in his defence as a result. With him not winning the ball in this example, this puts his defence under undue strain. 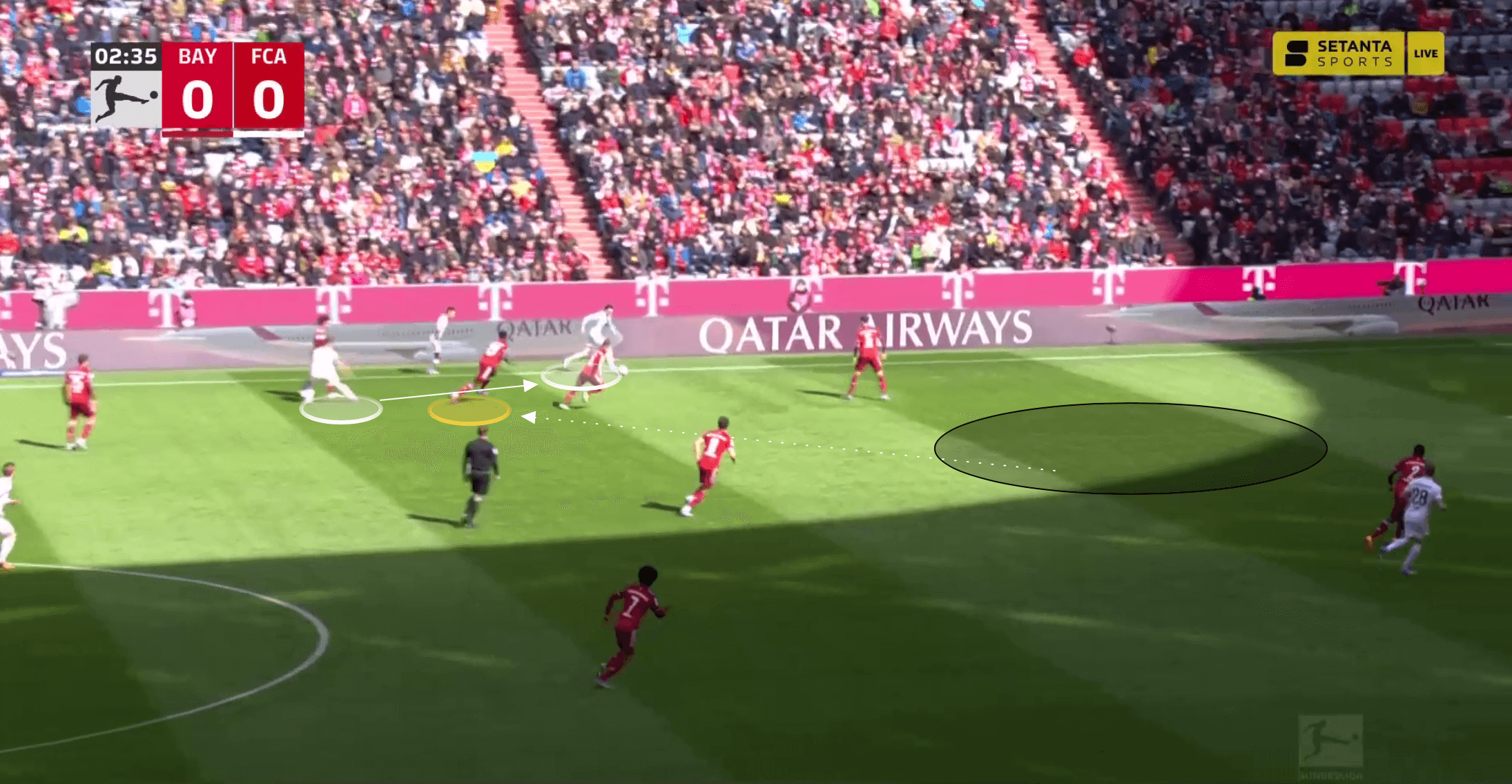 Aerially he has incredible athleticism, and when he times his leap right, he is very difficult to beat. Nianzou gets significant height on his jump and often leaps early, leaning into his direct opponent as he does so, allowing him to “hang” in the air for longer. 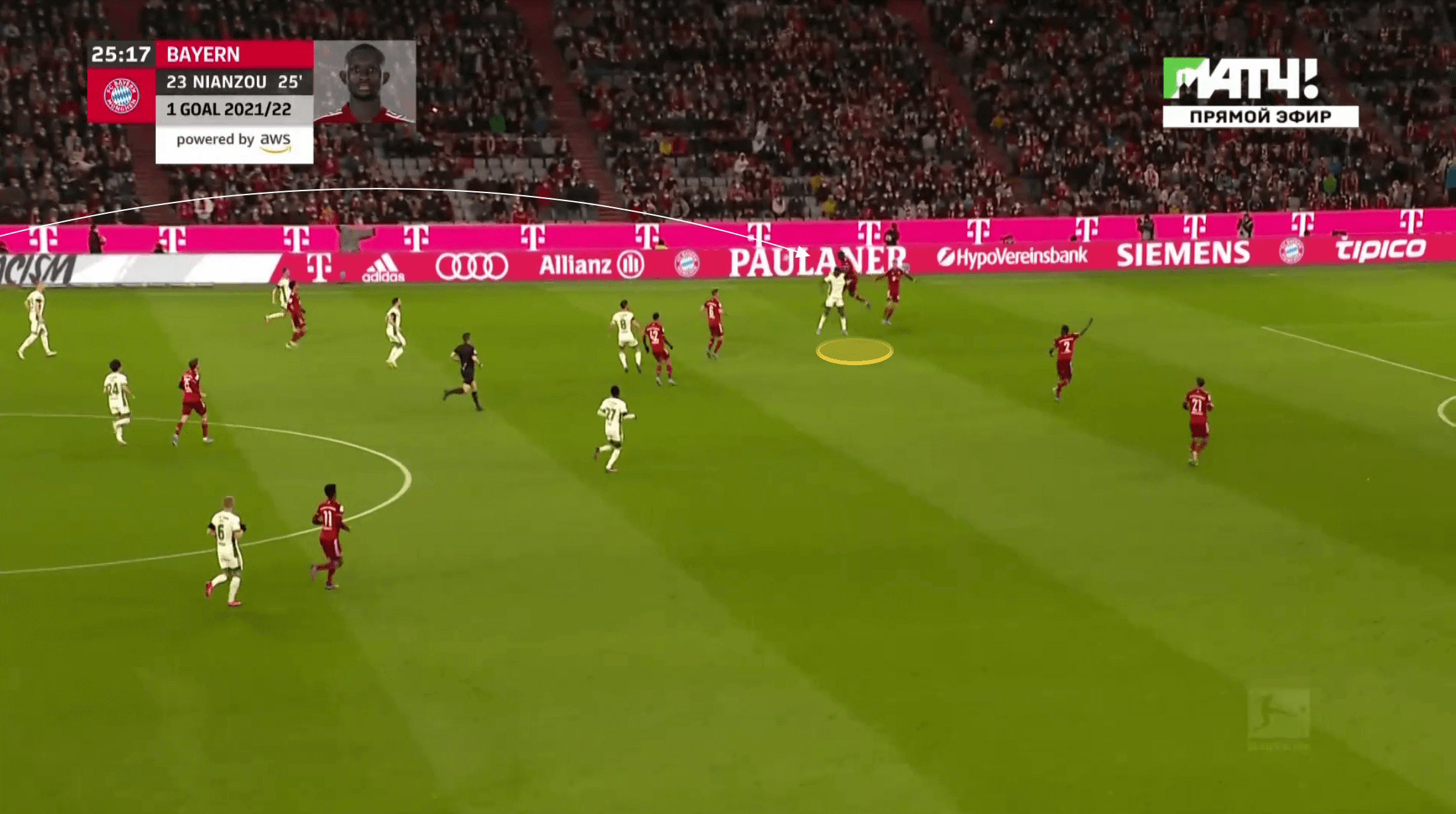 Once more, he is very aggressive coming forward to compete for the header. We can see him coming well out of his defensive line to meet a header from an Augsburg defender, putting the ball back into the box with an emphatic win. We can see the sheer difference in jumping height between the two players. This is a consistency throughout his aerial duels. 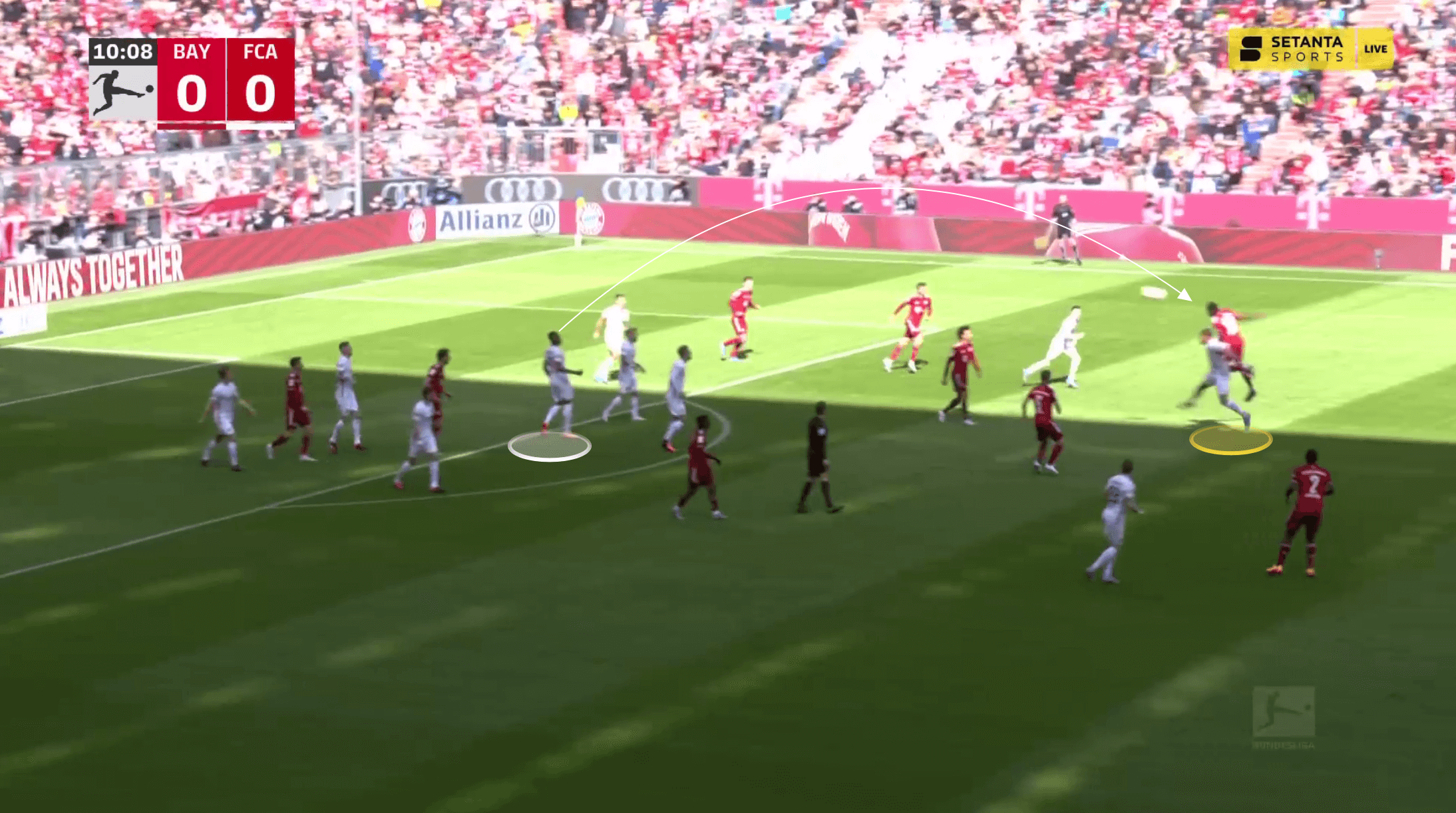 He is a threat from set-pieces in attack as well. He scored an excellent goal against Union Berlin this season spinning away from his marker and rising above everyone before powering home with a header. Once again we see the height he manages to get before winning the aerial duel. 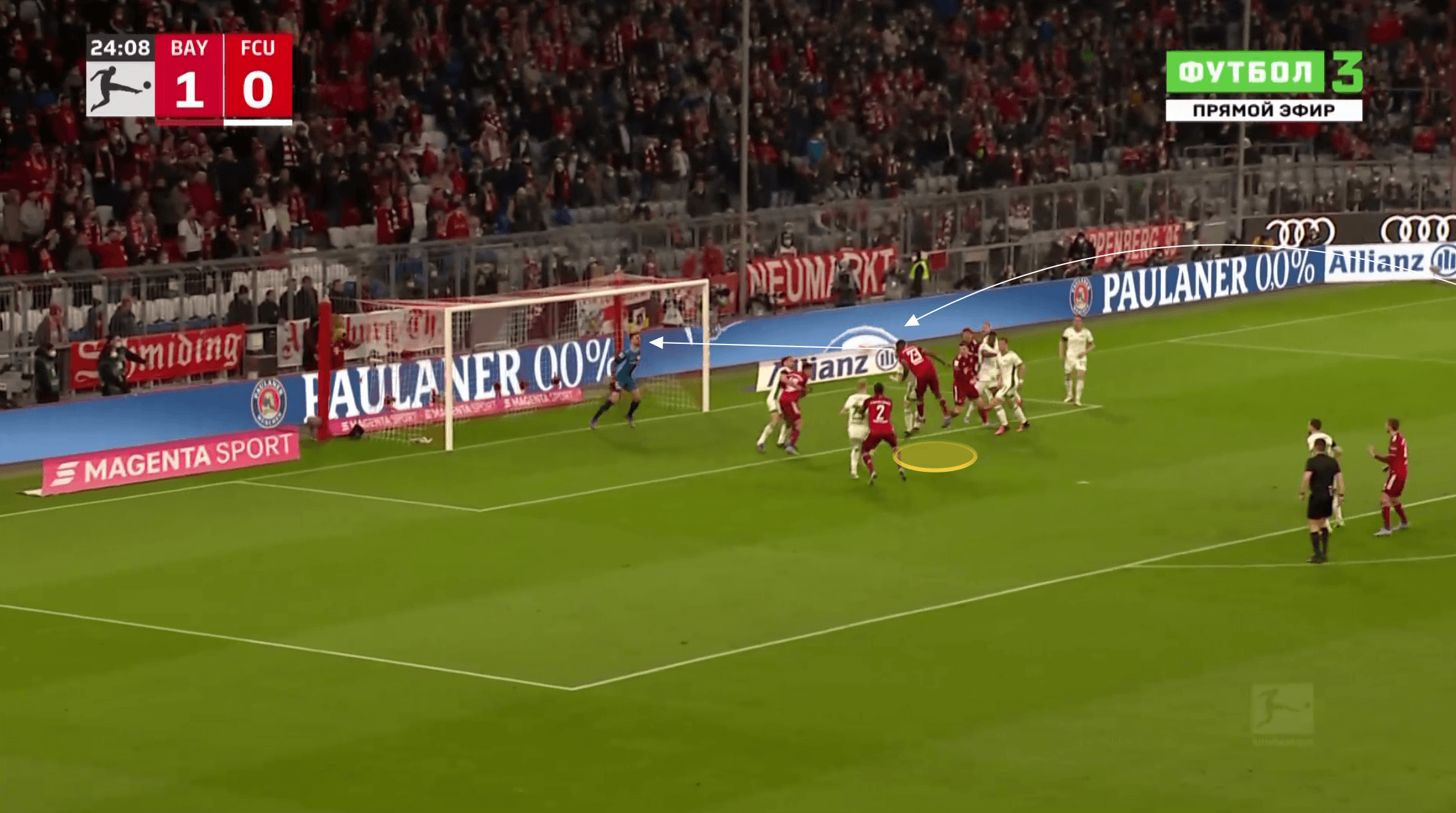 Nianzou is raw and has some clear areas for development over the coming seasons. However, if managed correctly, he is a player that has the potential to be a leading defender at the top level of the game. It will be interesting to see whether Bayern look to continue to bring him into the first-team, giving him minutes here and there, or whether they look to give him a season-long loan at, for example, another Bundesliga side.

Nianzou has the potential to be a very well-rounded centre-back. His ball-playing ability, with good composure and technique, means he suits a team looking to build from the back. He does need to develop a line-breaking pass option that isn’t a long, diagonal ball to either side, even though this option he has is already of the highest quality. He is unflustered under pressure, and as we can see from his dribbling ability, he is already a press-resistant player, but he could also grow into being a player who can progress the ball by dribbling as well.

Defensively, he is aggressive, and there are definitely some tweaks to be made on his decision-making of when to step out in this aggressive manner and when to hold his position. He does have a tendency to lunge in, but again if he can begin to choose the right moments to do this more frequently he will excel. Nianzou can also certainly develop into an aerially dominant player.

He has the athleticism required to perform at the highest level too, showing an outstanding ability to change direction as well as impressive pace over short and longer distances. He is already physically very strong, and as he matures, he will undoubtedly continue to fill out his large frame. 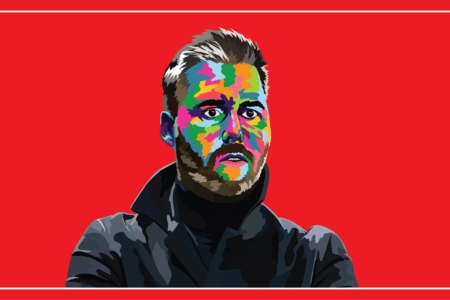 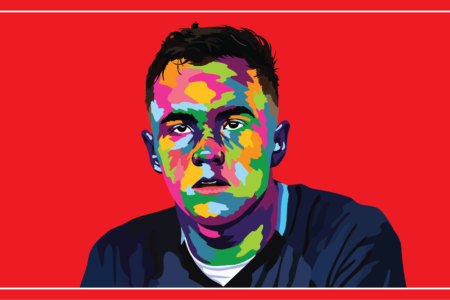 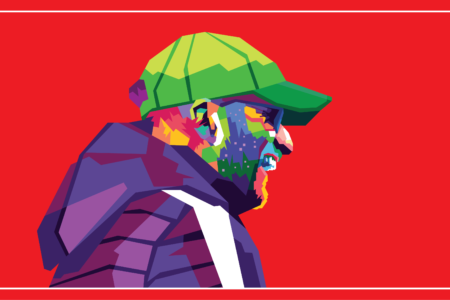 Analysis: Just another transfer window or a chance to revamp operations?

The summer transfer window is an exciting time for everyone in football. Players come and go while general managers and […] 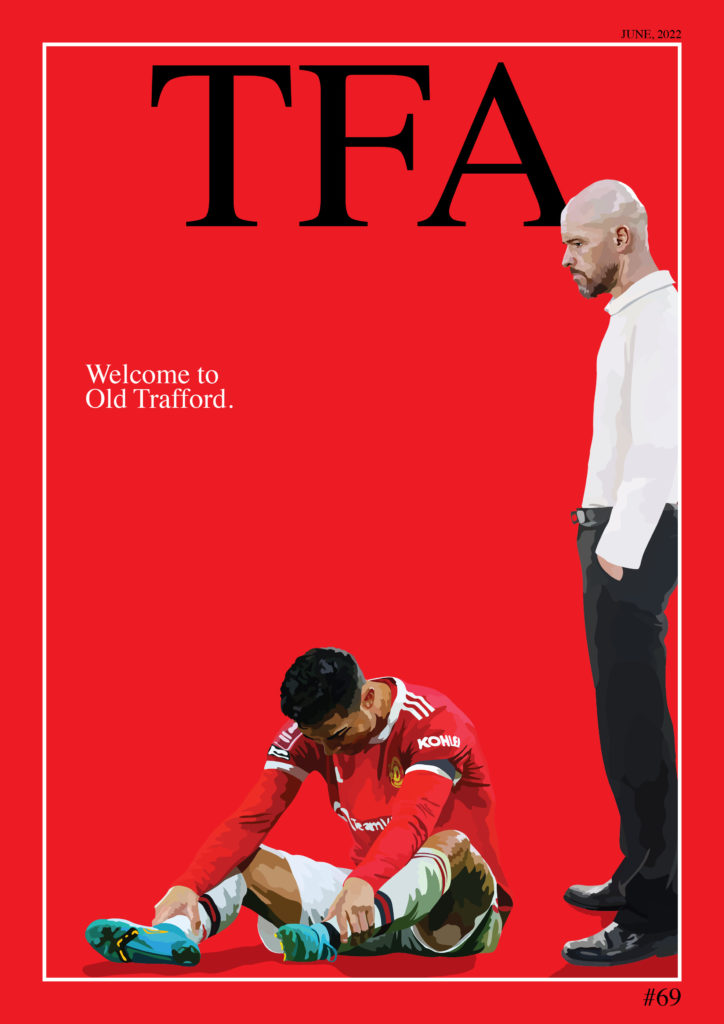