Deportivo La Coruña’s season was like a rollercoaster ride till this moment as they spent the bigger part of it at the relegation zone of La Liga 2. But after changing their shirts from ones with the horizontal blue lines to ones with the vertical lines, remarkably, they haven’t lost a single point. The squad managed to win seven games in a row and make a huge leap after they appointed new coach Fernando Vázquez, under whom the players blossomed, including youngster Victor Mollejo who played an important role in that comeback.

The winger on loan from Atletico Madrid searched for the right form from the start of the season and finally find it in the recent months pointing himself out for the return to Wanda Metropolitano. The 19-year-old is the embodiment of Diego Simeone’s fast-break play and could easily fit the current squad of Rojiblancos after he finishes his case-hardening at Depor. This tactical analysis scout report will show you why young Spaniard could be the solution for Atleti’s problems down the flanks.

Deportivo La Coruna’s transformation came up with the change of attitude since they’ve quickened their attacks and went to play more directly. They’ve accepted the 3-4-3 formation and they use it as the weapon of their variability with Mollejo next to one of the sidelines, preferably on the left because he is left-footed and can provide width. The thing about him is that he can easily cope with the transitive football as he is the two-way player useful both in attack and in defence, which is the first thing Simeone’s squad ask for.

When fast-countering, the youngster is on the left coming as the second-plan option and often playing unguarded enabling his side to move from one side to the other, getting him in the isolated situation.

Here we can see the most typical usage of the young player, who tends to come with the wide run-ins providing his attackers with crosses from those areas. He has good communication with his teammates and cooperates well with them, being unselfish in most of the scenarios.

Mollejo has also a good sense for space, knows how to time his runs and exploit the free room behind the defenders’ backs. Most of his actions take place out of the width due to the pace advantage he has when he is faced towards the opponent. His first step is often a lead for his team because he picks the right moment to cut in behind and leave the defender with no options.

This type of positioning makes it possible for his side to switch the play faster and to play directly in deep which is helpful to Deportivo but also often used from Atletico. The youngster could be the good fit for fast-forward side of Simeone as he is comfortable in getting them through passes to marked areas from where he most often supplies return-balls.

Wide positioning is not the only type that Mollejo repeats. He has a great sense for the action and frequently wants to find the best position to enable progress for his team, both on the flank and in the half-spaces.

As we can see, he finds the room to get the ball by cutting inwards and his body-positioning suggests that he is oriented to move forward, and not just to secure the possession by shielding the ball. From these positions, he habitually cooperates with the flank-player and thrives towards goal, trying to exploit the momentum he and his team have.

When closer to the opposition goal, Mollejo attempts in-box run-ins from the half-spaces trying to get the ball in the assist zones. He isn’t as included in the goal-creation as he could be, but he has a great potential to fulfil and that could be of great help in Simeone’s system as he will have a player who could play as an inside forward as good as the wide option.

Even though his inclusion is essential in fast transitive attacks where his role is isolation and mostly out of possession, Mollejo can play a huge part with the progress of actions with the ball in his feet. He is a wide-dribbler who doesn’t go face to face against the opposition often but does it almost exclusively from the flank positions.

The main route through which he tends to operate is the dribbling from the wide position towards the inner corridor of the pitch. He tries to inspect the situation and to make the best out of the free space he has in front of himself, while not running away from the scenarios in which he could get outnumbered by the opponents if there are possible pass forward solutions.

In the picture, the young Spaniard utilises the good first step and bad defensive shape of the opposition which he notices and then dribbles inside. That is his most common weapon when trying to win the space with the ball in his feet. He risks going into a “1 v 3” position against the defenders but has two options to move the ball towards the goal so he enters the inner corridor and plays a fast pass to a teammate with perfect timing.

His dribbling skills are also commonly combined with his cooperation with the striker(s) or with the midfielders. After he cuts from the flanks with his teammates available, he ends the action in the assists zone by finishing with a cross or a return-pass.

The actions like the one shown above could be of the great importance for his current squad as well as his future one. Atletico have players like Álvaro Morata, João Félix, Koke, and Saúl Ñíguez who are all comfortable in playing as the supportive options in the gaps between the lines and Mollejo likes to collaborate with the players in those positions which could speed up his adjustment to his parent team.

Once again, his main duties come as much of the ball as when he is in possession, and the key to his success lays in his good vision and sense for the action. He makes his teammates better with his movement and allows his team to move faster with his movements down the pitch. His motions open a lot of passing lanes and enable Deportivo to progress.

Here we see how he enters the middle to open up the room for the left-back to move forward while providing him also with the passing option in that will break one line of opponent’s defence. Those “fake” runs – that could also be used as the real ones if he gets the ball – constantly repeat in all of the areas of the pitch making his team’s actions flow smoother.

Mollejo opens up passing lanes mostly towards the wide players by positioning in the half-spaces. Those runs allow him to not only do a good job initially by creating space for his teammate, but also to get closer to the goal in order to be included in the action-finishing. Due to his unselfishness, Simeone could use him as the pass-opener and dummy player who can be of great help to the likes of João Félix and also to the full-backs who will probably profit from his movements.

Atletico Madrid lacks the wide players this season who could fulfil both a higher and lower position on the flank, and a versatile man like Mollejo could provide them with a concrete winger option as prior, but also with a left-back alternative. He’s gotten used to having both attacking and defending duties at La Coruña, so the two-way football is the one he is familiar with.

The key fact about his defensive game is his supportive play. He is very responsible, fulfils his tasks, and sticks to his position in the out-of-possession structure of his team and is also always there to help his teammates create a surplus situation over the player with the ball.

As we can see, he’s there to provide his midfielders with additional pressing asset coming from the wide area in order to disrupt the fast flow of the opposition’s attack. He does that frequently and shuts down the potential progress by closing down the passing lane, more than directly trying to win the ball in a “1 v 1” defensive setup.

His negative transition runs are also an important characteristic of his, especially when the potential return to Atletico Madrid comes into the equation. Even when he gets passed by the opposition, he manages to retain his position and come back in the block, once again helping teammate to outnumber the player with the ball.

Above is shown how Mollejo comes back into the defence, playing mostly as the supportive man. But he also has a great amount of aggression in himself, so he often goes to win the ball directly if the situation is shown. He is a good pressing player, knows how to initiate a press and how to recognise pressing triggers so he can be useful in an all-phase defence.

The youngster has great timing in pressurising the opponent and does it in the well-known situations and areas of the pitch. His pressings are mostly aimed at the flanks, which is apparently the idea of his coach at Deportivo but can also be seen as his preference when playing higher. Simeone’s Atleti also attempts counter-pressing with flank players as the main targets time and again, so Mollejo will give him a great asset in that part of the play as he is determined in defensive actions and is very aggressive when he feels the situation.

In the low block, which is also one of the most common defensive shapes Atletico uses, the 19-year-old is very responsible and sticks to his position while communicating with teammates and guarding the direct opponent.

As we can see, he’s comfortable with dropping very low, playing basically as the fifth player in the defensive line and securing the wide player when establishing the firm connection with the central defender and the midfielder at the same time. That could be of crucial help for Simeone’s tactics because, as we said, he can be used as a responsible winger as much as the full-back alternative in the low-physical duels.

Víctor Mollejo is a versatile wide player with a lot of tools in his arsenal and could make a good career as a two-way player in the teams that play direct transitive football. Although there sure is a long way for him to be one of the key players of Simeone’s squad, it is clear that he has potential to fit into the Atletico Madrid’s tactics, and it is most probable that he’ll come to his parent club after his loan at Deportivo La Coruña ends.

This analysis has shown the ups of his game, pointing him out as a possible solution for the flank issues Rojiblancos have down the flanks throughout this season. The youngster could provide them with an alternative option on various positions and, as time goes on, could become an important starter for the club from Wanda Metropolitano. The skillset with which he has at his disposal shows that he could be a good reinforcement for them, due to his qualities and also cause he has the club identity in his veins. 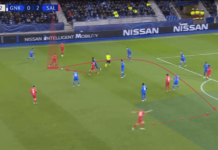 The Long Read: How to solve a problem like Milan

Sarriball: No more attacking dynamism at the Bridge