Borussia Dortmund have been an exhilarating outfit since their tactical change to a 3-4-3 formation earlier in the 2019/20 season. Perhaps the most important factor in that success was how the wing-back’s operated; Both Raphaël Guerreiro and Achraf Hakimi have been solid at the back but the attacking third is where their real worth has been. Together, they have contributed to 32 goals in black and yellow; with nine goals and 10 assists coming from Hakimi.

Unfortunately for Dortmund, the Moroccan’s loan spell has ended after two years with the club from Real Madrid. A replacement is needed and that is what Dortmund have already done, with the signing of Thomas Meunier from PSG for free, after the Belgian’s contract with the French giants ran out at the start of July.

This tactical analysis, which will be in the form of a scout report will be identifying the strengths and weaknesses in Meunier’s game, while also using analysis to determine how he will fair in Lucian Favre’s tactics.

At PSG, the offensive responsibilities of the fullbacks are not as high as at Dortmund, yet, Meunier still will usually operate high and wide when his side is trying to break down the opposition. His heatmap below shows that Meunier is highly active in the opposition half, while also having the ability to get back in shape out of position. 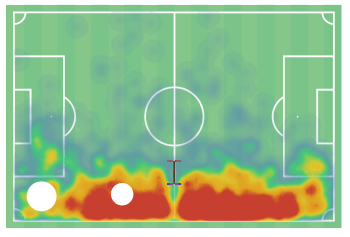 Considering the importance of being able to move up and down the line at Dortmund, Meunier will fit the bill in this area of concern. However, his output in the final third can be questioned and I will analyse this later in the analysis. 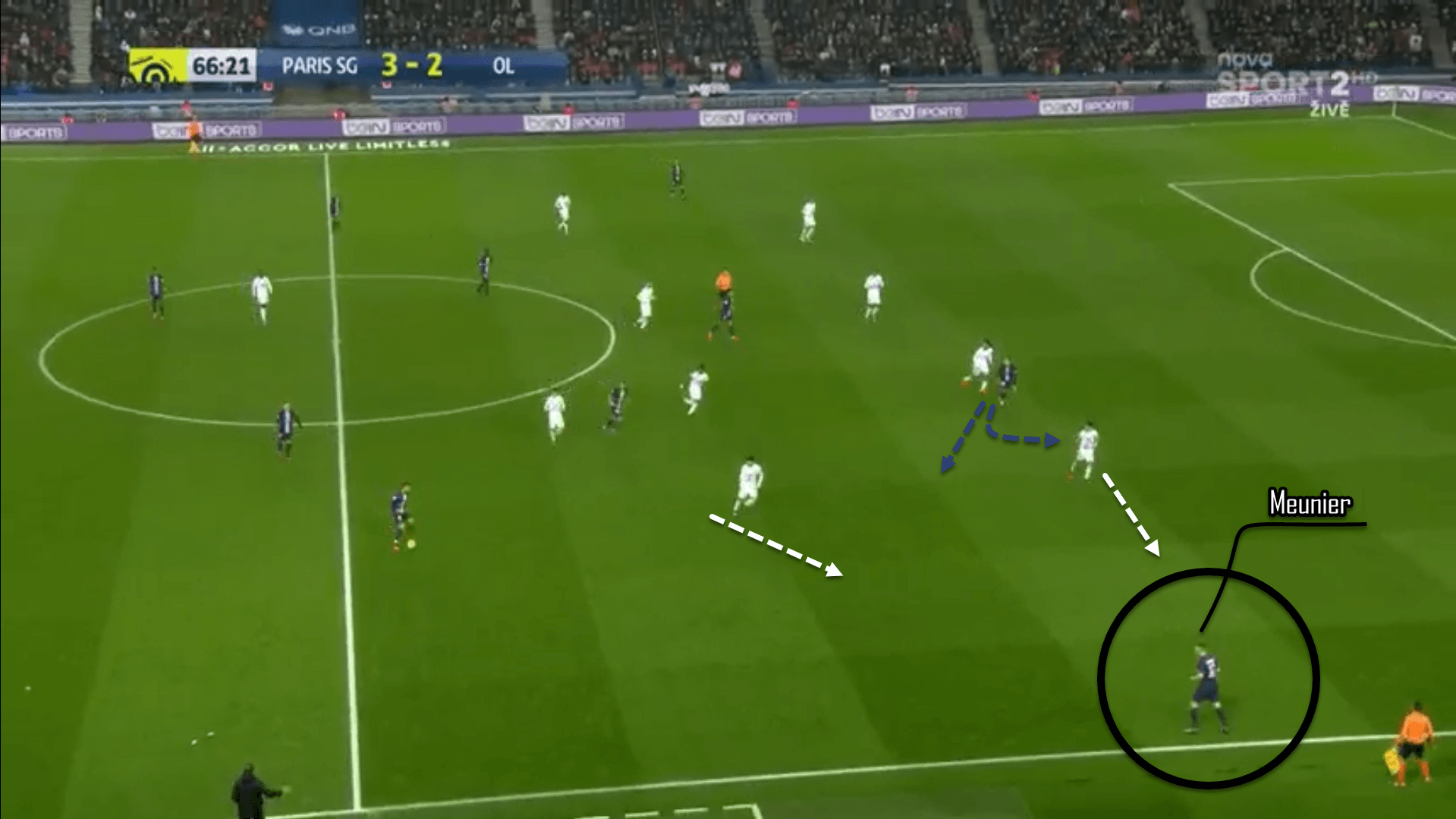 In the image above, we can see Meunier positioning himself on the same line as PSG striker, Mauro Icardi. He is also on the touchline. Even though Lyon were quite passive in how they move out towards him, in the Bundesliga, this will likely create space for the inside forwards such as Thorgan Hazard, Julian Brandt and Giovanni Reyna to receive passes in the half-spaces. 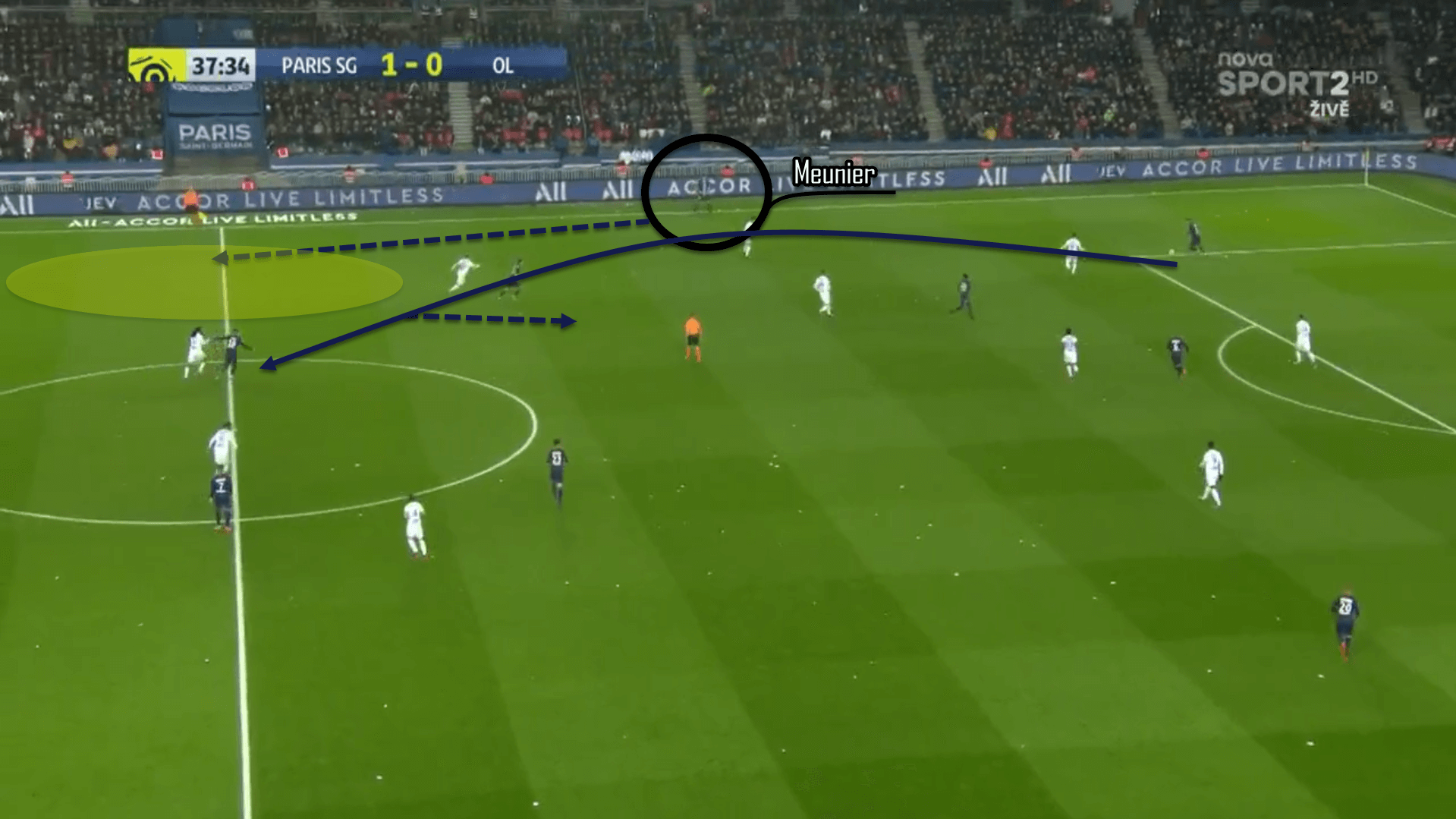 In the image above, PSG are very direct in their transition for their second goal against Lyon. Meunier is pivotal in this transition, firstly with his acknowledgement of the space in behind. After Icardi and Angel Di Maria drop deeper, space is created on the right side for Meunier to advance into.

After receiving the ball, Meunier can then drive forward more and play a pass across to Kylian Mbappe who scores. The attacking transition was quick and similar to one of Dortmund, Meunier was pivotal in the attack with good attacking movement and final ball.

When in defensive transition, Meunier’s speed and defensive abilities help him to stop the opposition trying to break. This would be a good ability for a Dortmund wing-back to have due to the number of men they commit in attacks. 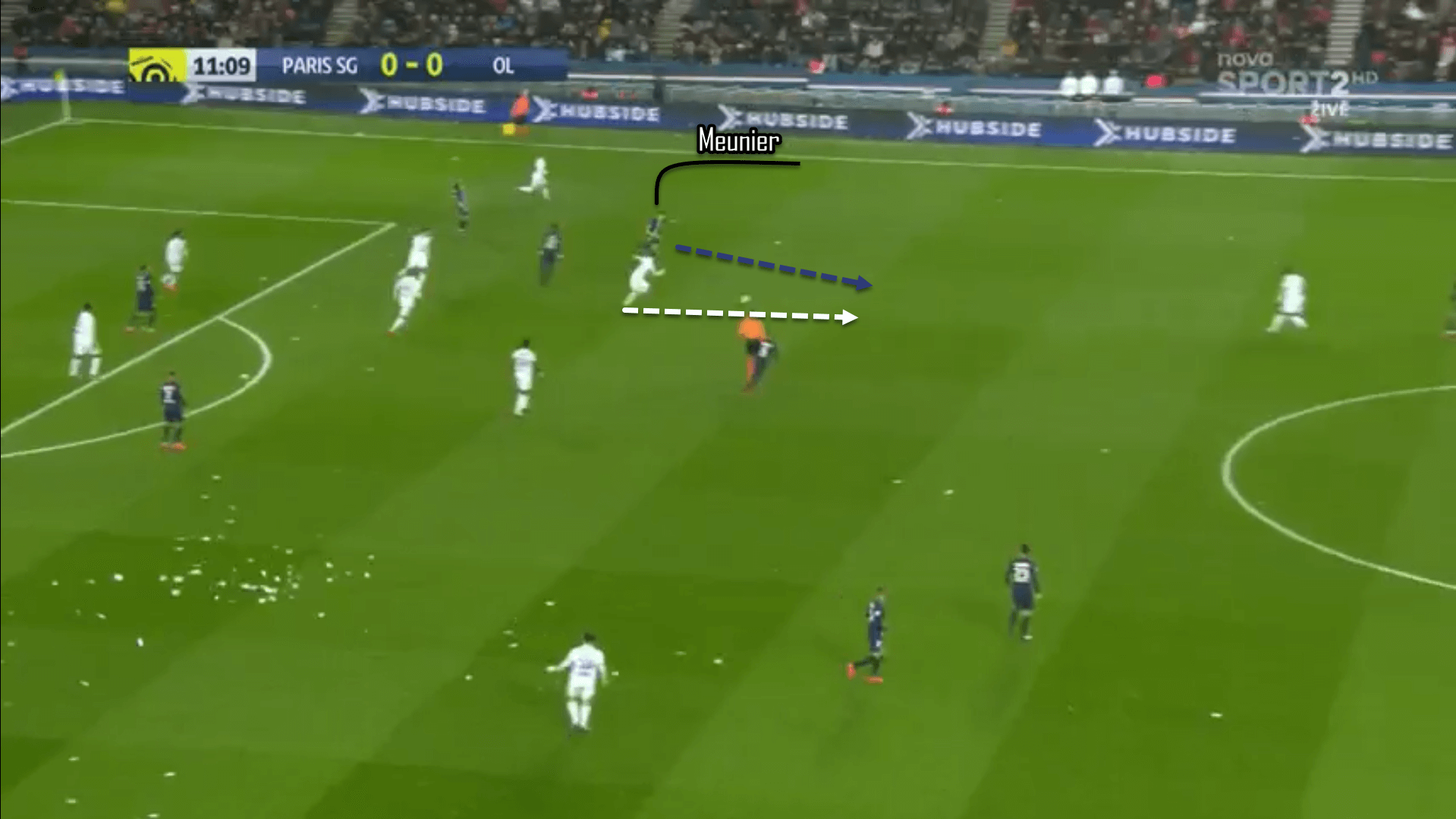 In the image above, we can see Lyon starting to attack after winning the ball in their own third. Meunier is able to follow the ball carrier, he firstly catches him up with speed but then also is able to make a brilliant tackle to win the ball back for PSG. Meunier’s defensive qualities help him in the counter-press and in defensive transition – he averages 3.96 counter-pressing recoveries per 90.

Lack of quality in his final ball

Dortmund had one of the best-attacking wingbacks in Hakimi. He was a great crosser of the ball and also a brilliantly direct runner. While, Meunier is not a poor crosser of the ball by any means – with a 32.89% crossing accuracy in the last calendar year – but he can sometimes lack quality in his final ball.

While Hakimi looks to dribble past his men and get into the best crossing position, Meunier is not as able in the dribbling department. Hakimi averages 2.13 dribbles per 90, while Meunier averages just 0.69. This means he usually is not in the optimal position to cross and thus does not always deliver a good ball in for the forwards. However, even when Meunier is in the optimal position, his final ball is not very consistent. 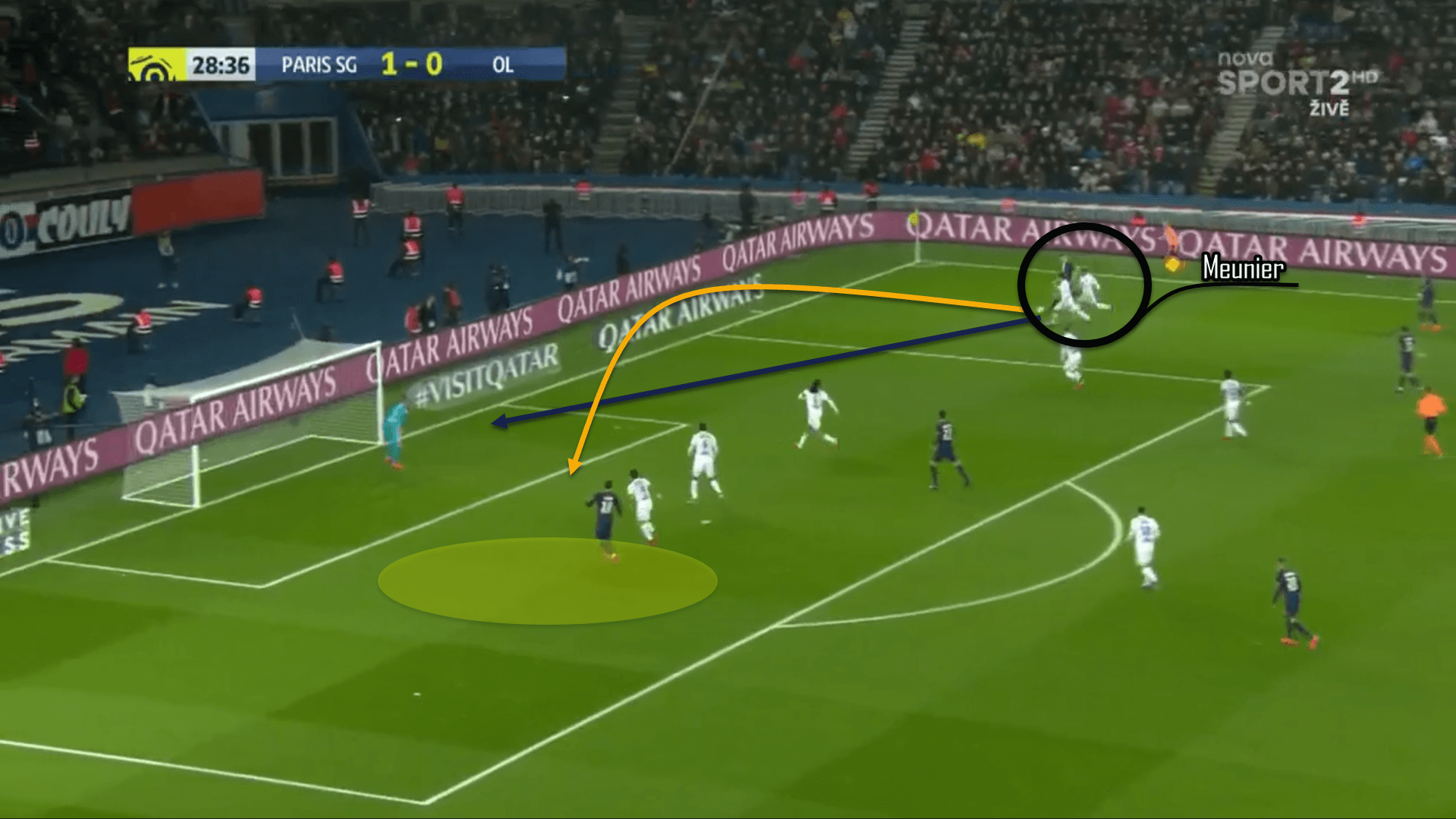 In the image above we can see Meunier on the ball on the right flank. He has just overlapped and is now in the position to cross the ball into the area. However, his cross goes straight towards the opposition goalkeeper and it ends in an easy catch. Icardi was waiting at the back-post, where a lofted ball towards this area could’ve seen him beat the full-back in the air. Granted, Meunier had pressure from two opposition players. 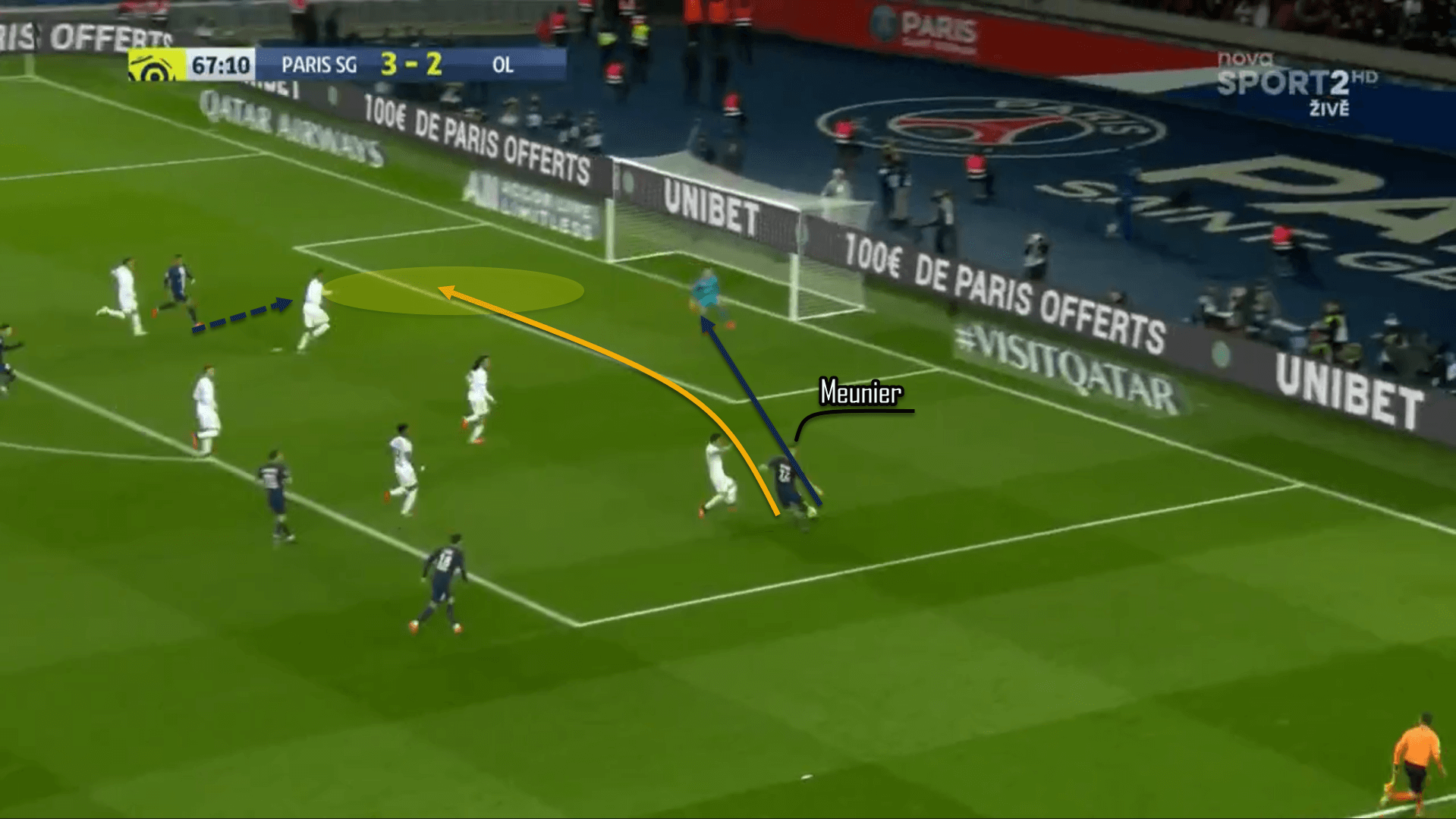 This time, however, in the image above Meunier is in an ideal position to play a low cross into Mbappe, who is making a run towards the back post. Meunier is unable to find a sufficient low cross into the dangerous area that his teammate is running into and instead plays a lofted cross/poor shot straight towards the goalkeeper. Considering Dortmund have had the largest percentage of their attacks (35%) come from the right, their wing-backs need to have composure and quality when playing the final pass/cross.

One area where Dortmund may get an upgrade in this signing is in the defensive capabilities of the wing-back. Given that Meunier mainly plays as a full-back rather than a wing-back, it is no surprise that he is more defensively solid.

The Belgian averages 1.97 tackles won and 2.21 interceptions per 90 this season. He is quick off the mark and looks to engage in duels against his man. His reading of the game in front of him is also good, however, he can sometimes switch off. 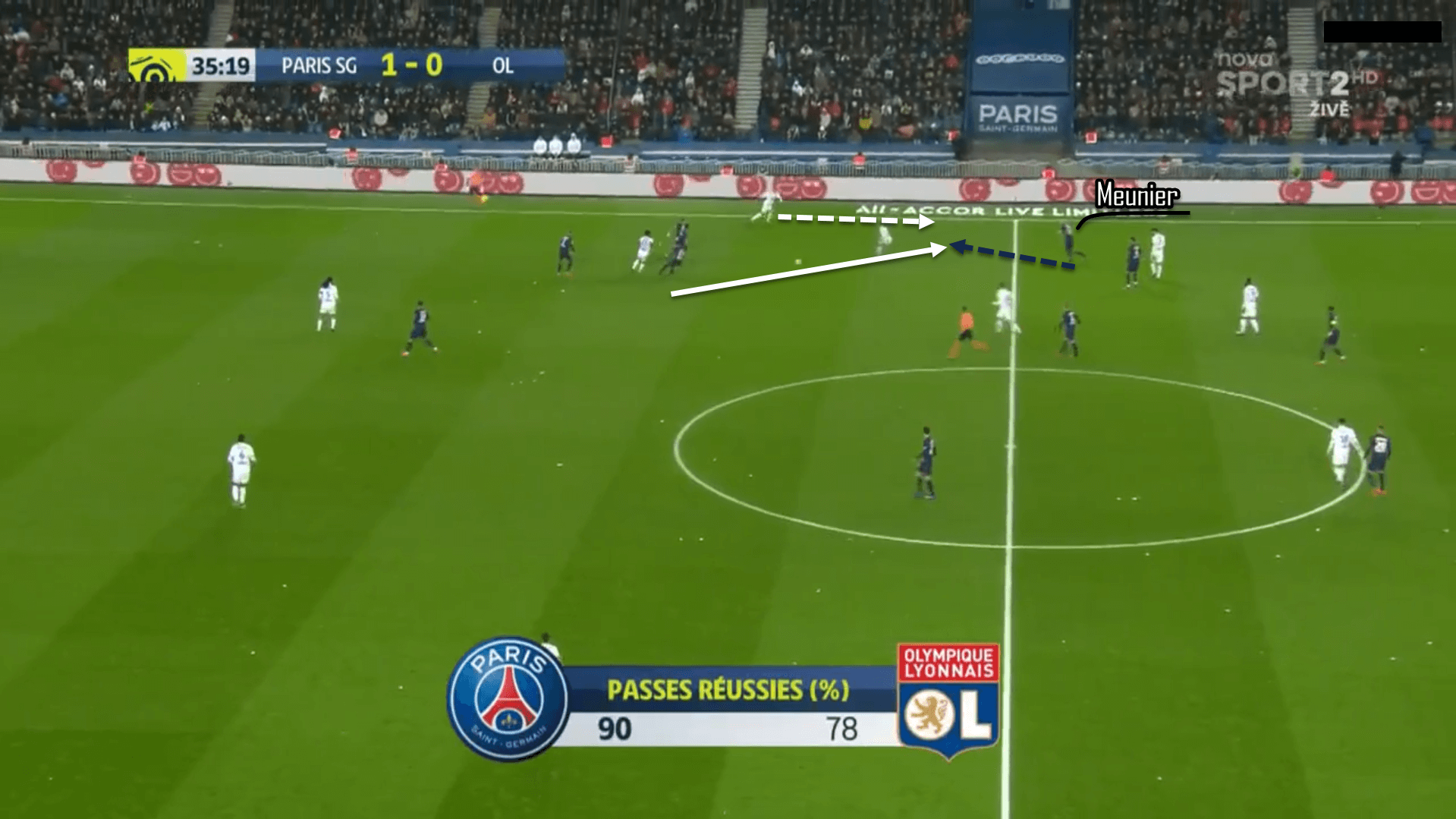 Here is an example of Meunier’s defensive abilities. With the opposition attempting the progress the ball on their left side, Meunier notices the run from the opposition left-back, he engages and moves forward to cover his run. The opposition midfielder tries to flick the ball to his left-back, but Meunier is able to intercept the ball and take possession of the ball. He is able to do this due to his good reading of the play in front of him. 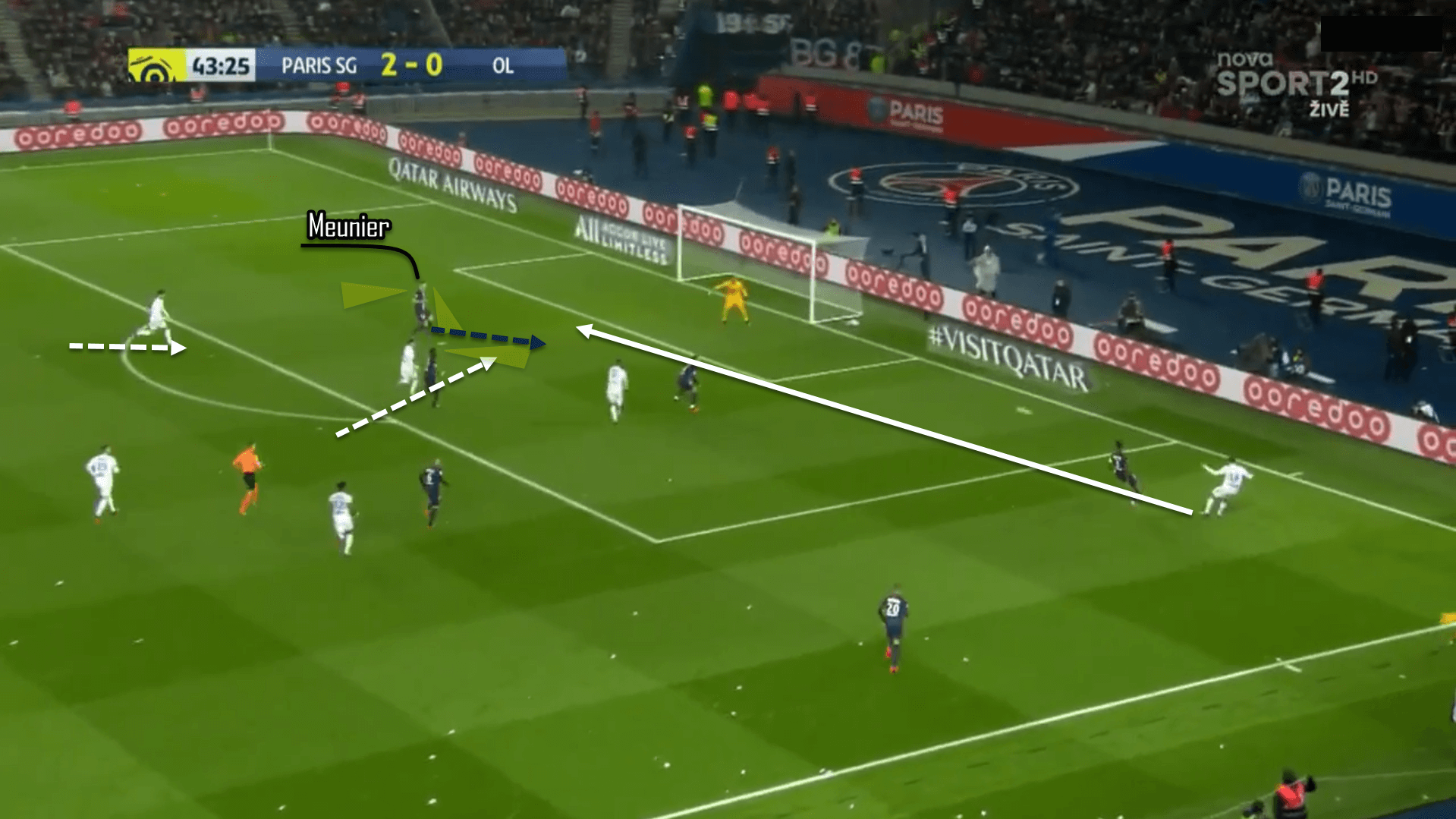 Again, here is an example of Meunier’s defensive abilities. We can see that the opposition have created a crossing opportunity on their right side. Idrissa Gueye has a player behind him, making a run into the box on his blindside, this could give him an advantage against the PSG midfielder with his run in the box due to Gueye not knowing the oppositions movement. Meunier scans the area and knows that he has a runner behind him; but he sees that the opposition has made a movement behind his teammate, Gueye. Meunier decides to move across and cover this run, he is able to clear the incoming cross and stop the opposition runner have a tap-in. Although he left his man, Meunier did so due to his solid reading of the game.

However, while Meunier is a solid defender, for the most part, he can sometimes switch off and this can lead to chances for the other team to exploit. 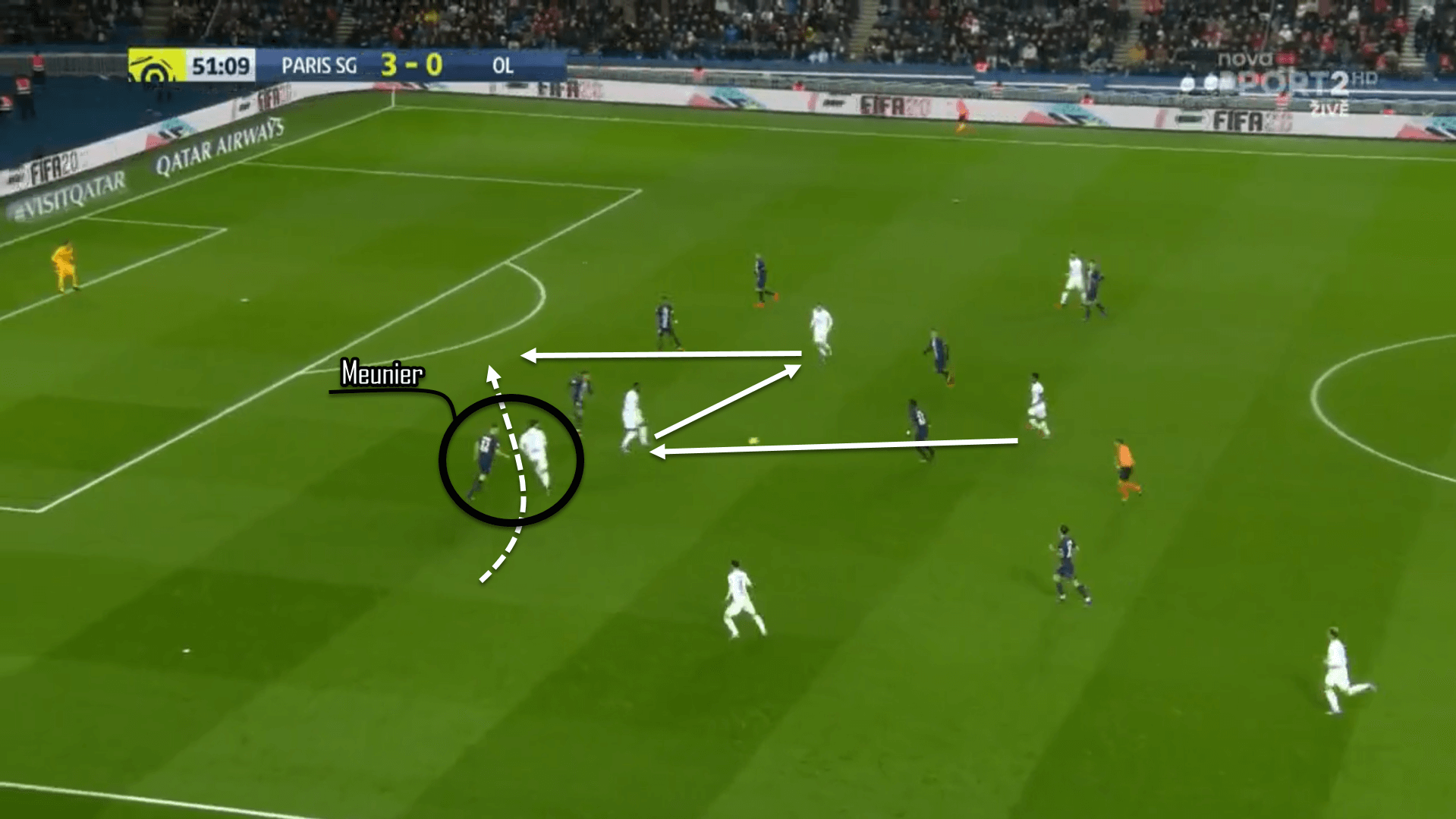 In this example, we can see Meunier marking the opposition wide man. After some central interplay, the wide man makes a run behind the PSG defensive line. Although Meunier is initially marking him, their Belgian loses concentration and in turn, loses his man. The pass is played through and the opposition are able to score.

While he is an impressive defensive player and perhaps a defensive upgrade, he still has losses of concentration which can lead to chances for the opposition.

It is clear that Meunier will be a good pick-up on a free transfer for Dortmund, while also solving a positional vacancy. Meunier offers both offensive and defensive qualities, albeit, his offensive abilities are not that of Hakimi. He might not be the best option in the wingback position, however, he could provide a good option until Mateu Morey develops further.

This tactical analysis has shown that Meunier is somewhat of a good fit for the German side, with him being likely to be able to suit the quick transitions and high positions which their wing-backs occupy. His quality on the ball might not be the best, but he could provide more defensive stability. Considering he has joined the club on a free transfer, Meunier is a solid signing for BVB.