Shon Weissman is currently the best goalscorer in the Austrian Bundesliga and also top of the list when we add assists to the equation. In 20 appearances he scored an impressive figure of 20 goals and provided three assists. The Israeli joined Wolfsberger AC at the start of this season from Maccabi Haifa for free and missed just one game out of the 22 matches in the Austrian Bundesliga.

Wolfsberg did an outstanding job as they brought in their best forward and the most valuable player of the whole squad without paying Maccabi Haifa a single dime. In this tactical analysis in the form of a scout report, we’ll take a closer look at the qualities and tactics of Weissman to understand why he is so important to his team.

Basically, Wolfsberger AC is one of the few teams in the Austrian Bundesliga which stay within their preferred formation. While it is usual in Austria’s top-flight that teams often switch between systems with a back three and a back four, the team of the new head coach Ferdinand Feldhofer (he took over after Gerhard Struber’s move to EFL Championship club Barnsley) always exclusively used the 4-3-1-2 formation under Struber and are doing the same thing under Feldhofer.

In this system, some players play in almost every game and due to that, the mechanisms and patterns function perfectly as they know each other so well. Lukas Schmitz (left-back), Michael Liendl (offensive midfielder), Mario Leitgeb (defensive midfielder), Michael Novak (right-back) and Weissman (forward) are for example five players who only missed 178 of the 1890 possible minutes in this season.

As we can see in Weissman’s heatmap below for his 20 appearances in this season, the Israeli is usually the right striker in the 4-3-1-2 system. In the first part of the season until the winter break, Anderson Niangbo was his partner in almost every single game. However, RB Salzburg ended his loan at Wolfsberger AC in the winter transfer window to then sell him to KAA Gent. In the three Bundesliga games after the winter break, Alexander Schmidt was the second forward on two occasions while Cheikhou Dieng was his partner once. 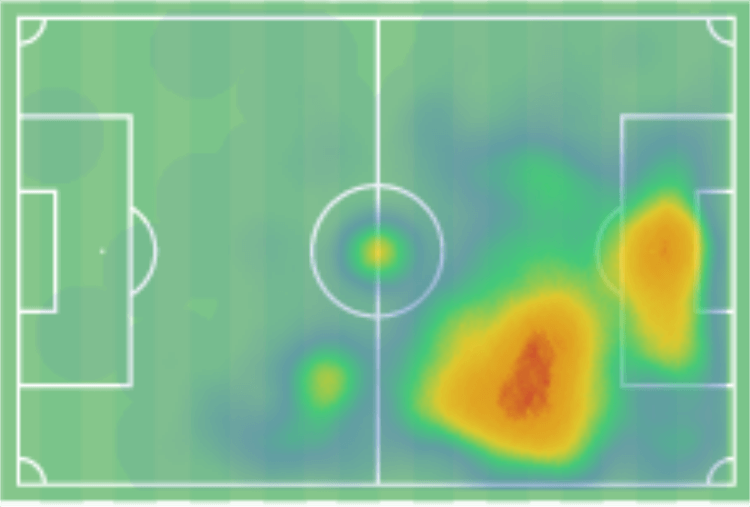 Before we now take a closer look at Weissman’s style of play in this tactical analysis, it’s safe to say that his strength is clearly not to get that much involved in the build-up and drop deeper to get on the ball. The 24-year-old forward focuses on his main task which is creating something dangerous in the final third. He plays on average just 19.79 passes per game and starts 2.2 dribbles times per 90 minutes. These two values already tell that the forward is not similar to Liverpool’s Roberto Firmino or Marco Reus at Borussia Dortmund who both position themselves deeper to get on the ball and help the team during the phase of possession.

Instead, the Israeli mostly positions himself about on the height of the opposing defence and between the opponents. When they play with a back four, we can see Weissman between the opposing left-back and left centre-back in the majority of the situations during Wolfsberg’s phases of possession. 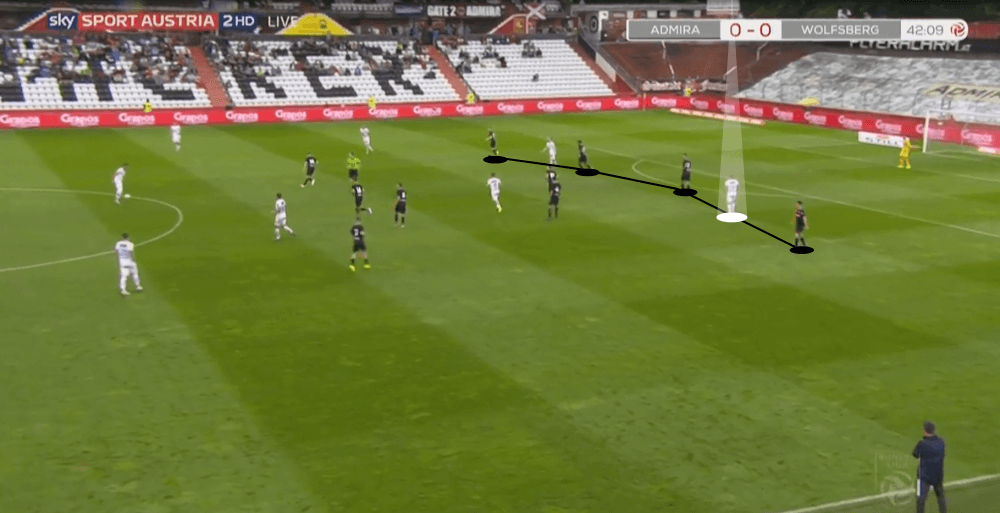 However, even though his numbers for passes and dribbles are not outstanding, he still supports his teammates during the build-up in a different way as he can be the target for long balls which he then lays off for the deeper positioned midfielders. Weissman stands at 5′ 8″ but still we can often see that the other players of Wolfsberger AC want to find him with long balls to overcome the midfield line of the opposition.

Also, when the 24-years-old is not able to keep his team in possession of the ball, the team of head coach Feldhofer instantly start to counter-press. In the example below, we can see a situation in which the left-back Schmitz finds Weissman who then lays itthe ball off for Miloš Jojić. 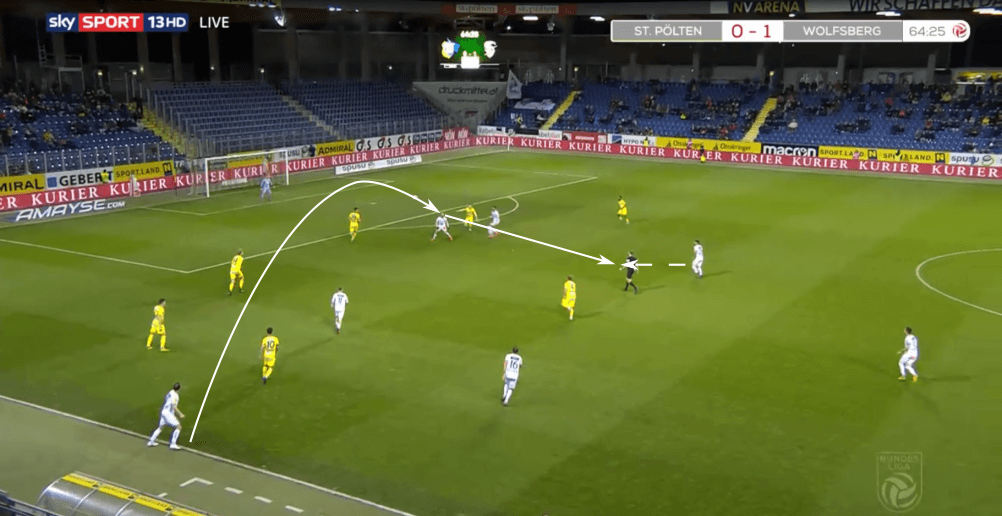 Also, as soon as his team is able to progress the ball further up the pitch, the 24-years-old tries to position himself at about the height of the deepest defender of the opposition. This helps him to then receive through passes and exploit his acceleration which is indeed good, but not that outstanding enough that you could say that it is one of his greatest strengths.

In the shot below we can see a perfect example as the Israeli is just onside the moment the pass is deployed and scores after a decent through ball. 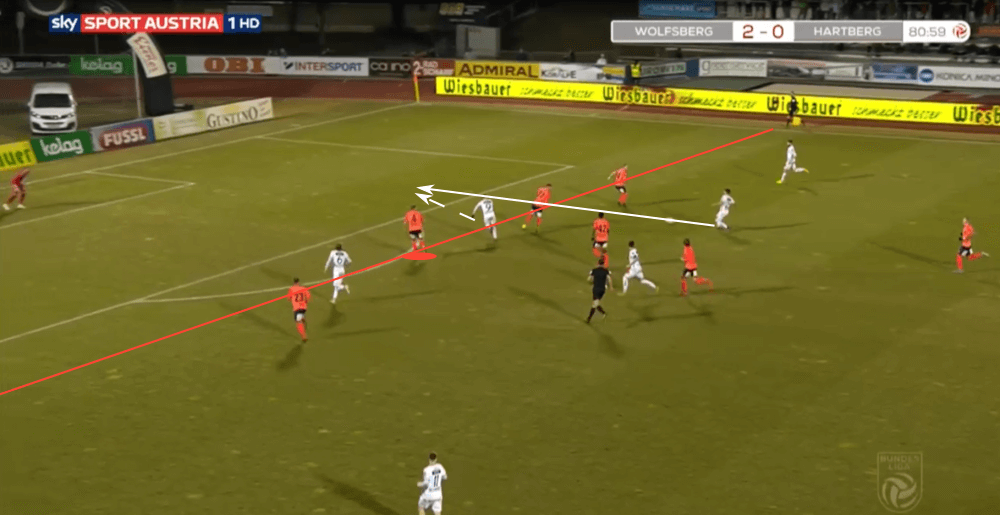 Clever positioning in the penalty box

Basically, since Weissman is not a player who is that often on the ball in deeper areas, doesn’t dribble that often or is responsible for the creation of chances in the final third with through passes, we’ll focus on his two real qualities – his movements within the penalty box and his shooting itself.

These two factors are clearly the main aspects which make the Israeli the player with the second-best value for goals per 90 minutes after Erling Haaland. The Norwegian star scored 1.4 goals per 90 minutes during his time in Austria’s top-flight on average while Weissman has an also incredible number with exactly one goal per 90 minutes.

Quite often it seems like the opposing defenders would give the Israeli way too much space in the penalty box and then the 24-years-old has no problem to either score with the head or with the foot from a short distance. However, you have to give huge credit to the forward as his intelligent movement and his positioning give him a lot of space in several situations after crosses.

Basically, Weissman likes to position himself on the far hand post (especially when the ball gets delivered from the left-wing since then he’s automatically at the second post) because there the centre-backs can’t track his runs that good as they don’t see him. Then, when the ball is crossed into the centre, he sprints diagonally towards the first post and is often completely free as the defenders don’t see him coming. In the shot below we can see a perfect example of that during the UEFA Europa League group stage match against Roma in which he scored with a brilliant header after such a diagonal movement. 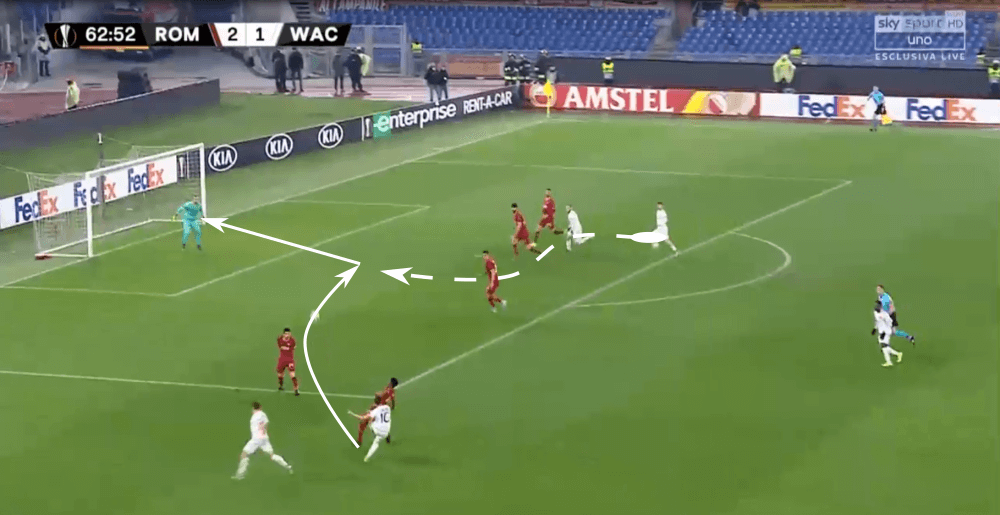 We already saw during the first part of this tactical analysis that he likes to position himself between two opponents and not close to them to give himself a bit more space. The same can be seen when we analyse his behaviour when his teammates are about to cross the ball into the penalty box.

He tries to position HIMSELF in the space between the defenders which then allows him to create distance between himself and the opponents. This then gives him the chance to try to score a goal without that much pressure from the defenders as they are not close enough to him. In the example below, Liendl (14 assists in this season) delivered a perfect cross while the positioning of Weissman is also excellent. Without any body-contact from an opponent, the Israeli is able to convert this ball into a goal with a one-touch volley. 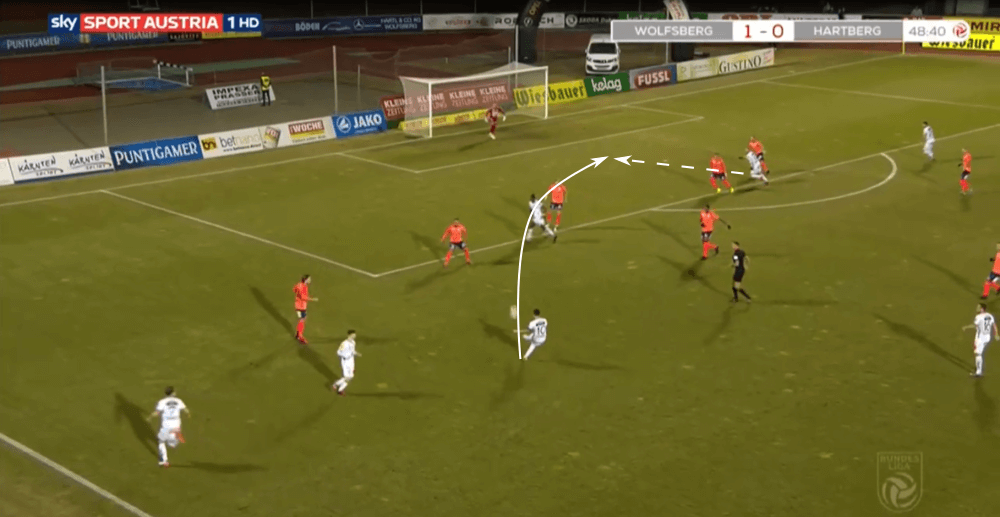 So, we analysed two situations in which the 24-years-old striker sprinted diagonally towards the first post and towards the goal respectively. In both situations, he moved into position moments ahead of the cross to then move into a free area and that allowed him to score with the first touch.

However, there are also several situations in which the forward of Wolfsberger AC positions himself near the penalty spot and doesn’t sprint towards goal and stays in this area. This pretty much depends on the positioning of the defenders and also the player who delivers the cross. For example, the situation above in which he’s positioned between the two defenders of Hartberg, they are at the edge of the penalty box and there’s a lot of space in front of them. Due to that, it would make no sense in this situation to not sprint into the area in front of the goal.

In moments like the one below where it is much harder to bring the ball in front of the goal, as once again Liendl is the one who delivers the cross but this time form the other side, and the defenders are closer to their own goal. Because of that, Weissman again creates distance between himself and the opponents and positions himself between them and slightly deeper. Liendl’s cross is coming directly towards him and he scores with a beautiful volley which is again just possible due to his great positioning and of course another decent cross by Liendl. 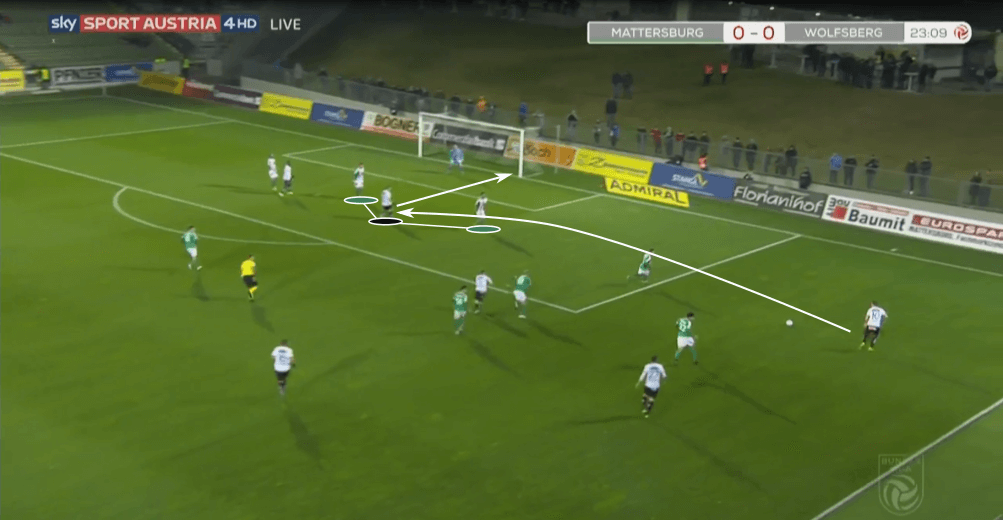 Quality in front of the goal

Now, as the final topic of this tactical analysis, we’ll take a closer look at the ability of Weissman in front of goal. The majority of his goals result from crosses (as we already saw), rebounds (in these situations he proves how important it is to sprint towards the goal as soon as a teammate shoots as the keeper can’t always catch it) or one-on-one situations against the goalkeeper.

We’ll now take a closer look at the last point since his conversion of chances into goals is really impressive, which is also shown by his xG – 0.69 per game while he scores one goal per 90 minutes. Also, 59.4% of his shots are on goal and maybe the most astonishing value is that he needs just 3.21 shots per goal. This means that as soon as the Israeli gets in any kind of dangerous situation near the goal, it’s likely that he will score.

When we look at the graphic below which shows us his shot distribution, we can see that he primarily tries to score with low balls into the corner which is, in general, the most effective type of shot. 27.9% of his shots are in the left or the right low corner. Considering this, Weissman is a role model for all young strikers as he proves how effective this kind of shot really is. 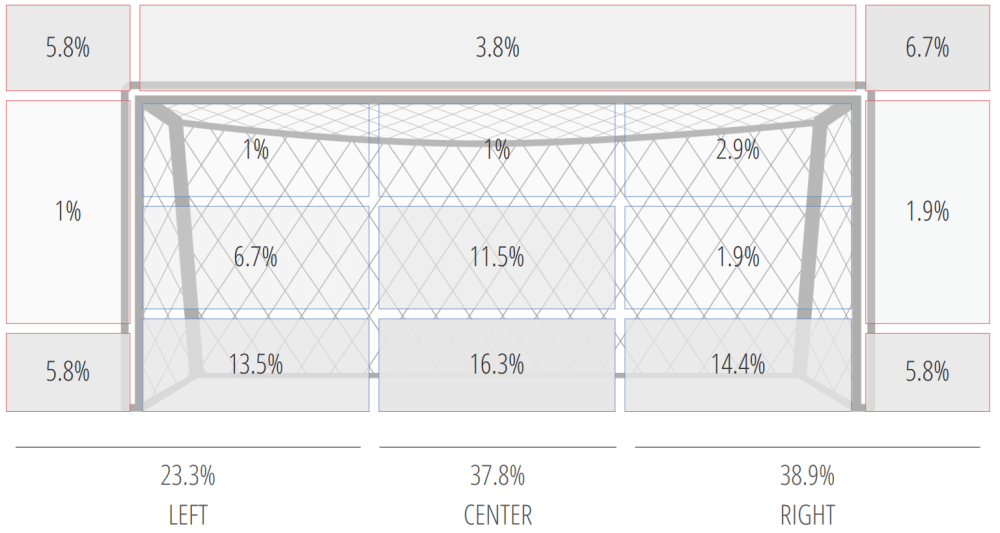 Also, as a very last point of this analysis, you need to mention that the Israeli never panics in front of the goal or tries to only score with power. Instead, he looks where the goalkeeper is positioned and then uses low-driven shots to place the ball next to the goalkeeper and score. We can see below two perfect examples of that as both times Weissman doesn’t shot with incredible power but scores with simple low shots. 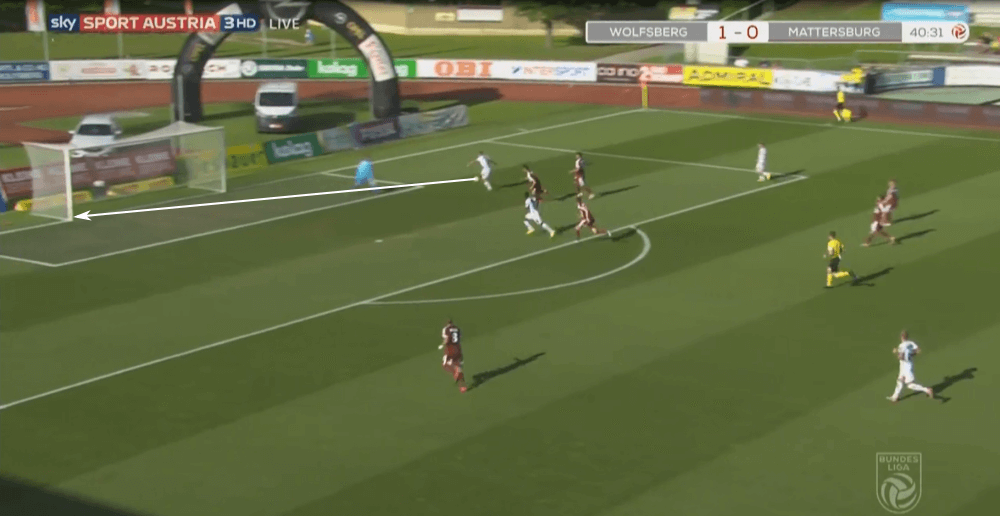 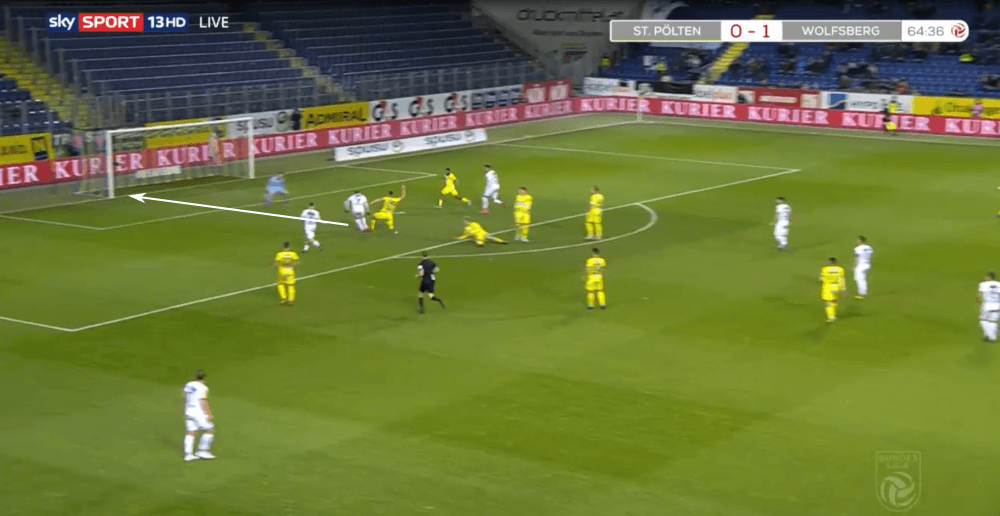 All in all, the 24-years-old forward is clearly one of the great surprises of this season in the Austrian Bundesliga and there are still enough matches to come in which he can continue to score. Back when Weissman joined Wolfsberger AC in the summer of 2019, his market value was £450k and now he’s worth £2.7million. Just these values and the fact that he scored as many goals as games he played, show what an incredible player he is.

At the stage of 24, this could be the season in which clubs from other European leagues like the Bundesliga take note of him and probably try to sign him. Of course, in such situations, it’s also always possible that RB Salzburg buy him, but it will depend on his performance in the remaining matches of the season.

Sell Sancho: The Stuttgart sensation that means Dortmund should cash in

Jadon Sancho to Manchester United was quite possibly the biggest transfer saga of the summer transfer window. It looked inevitable […]

The January transfer window has always been a difficult one. Good players only move in the middle of the season […]

It has not been a happy season for Tottenham Hotspur Women in 2020/2021, with the team finding wins hard to […]