Under the guidance of Erik Ten Haag Manchester United will attempt to start re-building this summer. Manchester United will achieve their worst ever performance in the Premier League this season, after their humiliating 4-0 defeat to Brighton and Hove Albion last Saturday they will now have their lowest ever points total in Premier League history. The job Erik Ten Haag faces is a steep one, with issues all over the pitch and issues off the pitch that need to be corrected.

One area that Ten Haag will be looking to improve is defensively, both in terms of team defence but also personal. So far this season Manchester United have conceded 56 goals which makes them the 13th ranked defence in the league. Recent reports have Villareal’s Pau Torres as the Centre-back to come in and help solidify the Manchester United defence but is he the right man to do this.

This scout report and tactical analysis will analyse Pau Torres and assess whether he is the right man for Manchester United while looking at his strengths and weaknesses.

The first place to start this analysis is to look at Pau Torres’s performance in some data metrics, both in and out of possession. In the modern game defender’s contribution in possession is now critical, with defenders being responsible for starting the attack and looking to progress the ball up the field. In addition to in possession metrics, we will look at a couple of defensive metrics however these must be looked at with context, which will be addressed later. The following graphs will show Pau Torres amongst Centre-backs across Europe’s top five leagues who have accumulated over 2000 minutes for their club this season.

The first graph we will take a look at is ball progression in both the form of progressive passes per 90 and progressive runs per 90. Now ball progression is an essential element for a modern Centre-back with the majority of the attacking phases starting from the back, the ability to move the ball up the field and closer to the opposition goal is imperative.  As you can see below, Torres is an excellent ball progressor and can help explain why Manchester United is so keen on the Spanish defender. 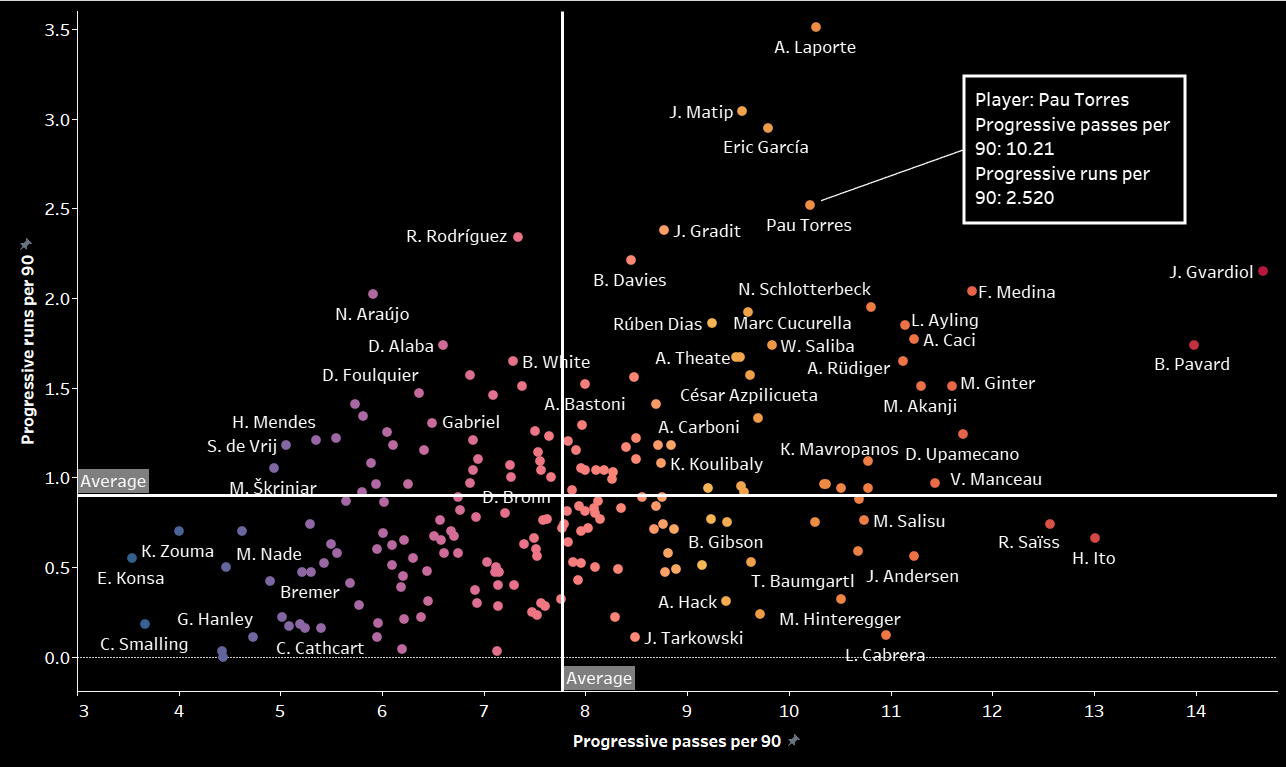 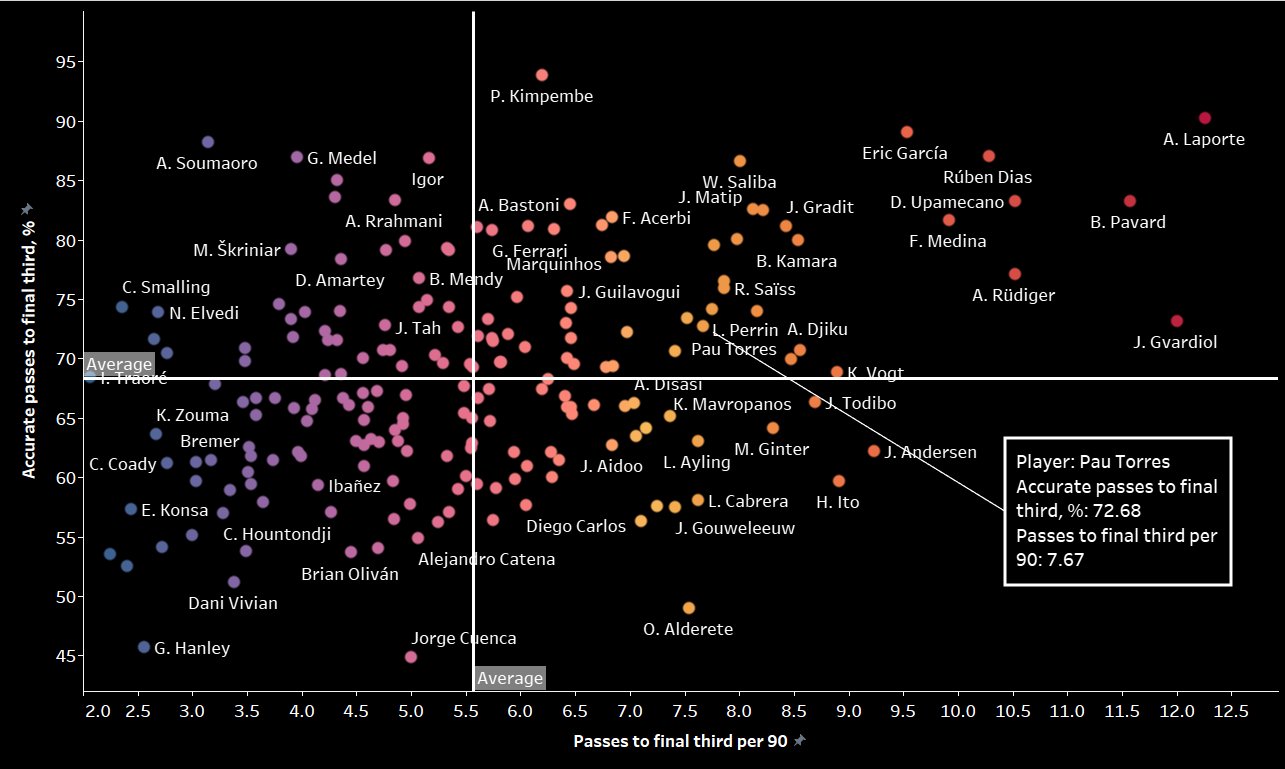 Torres manages 7.67 passes to the final third per 90 at an accuracy of 72.68%, again amongst some of the top performers in Europe’s top 5 leagues. The final passing metrics we will address are smart passes per 90 and through passes per 90 both of which look at the ability of the player to penetrate the opposition defensive line. 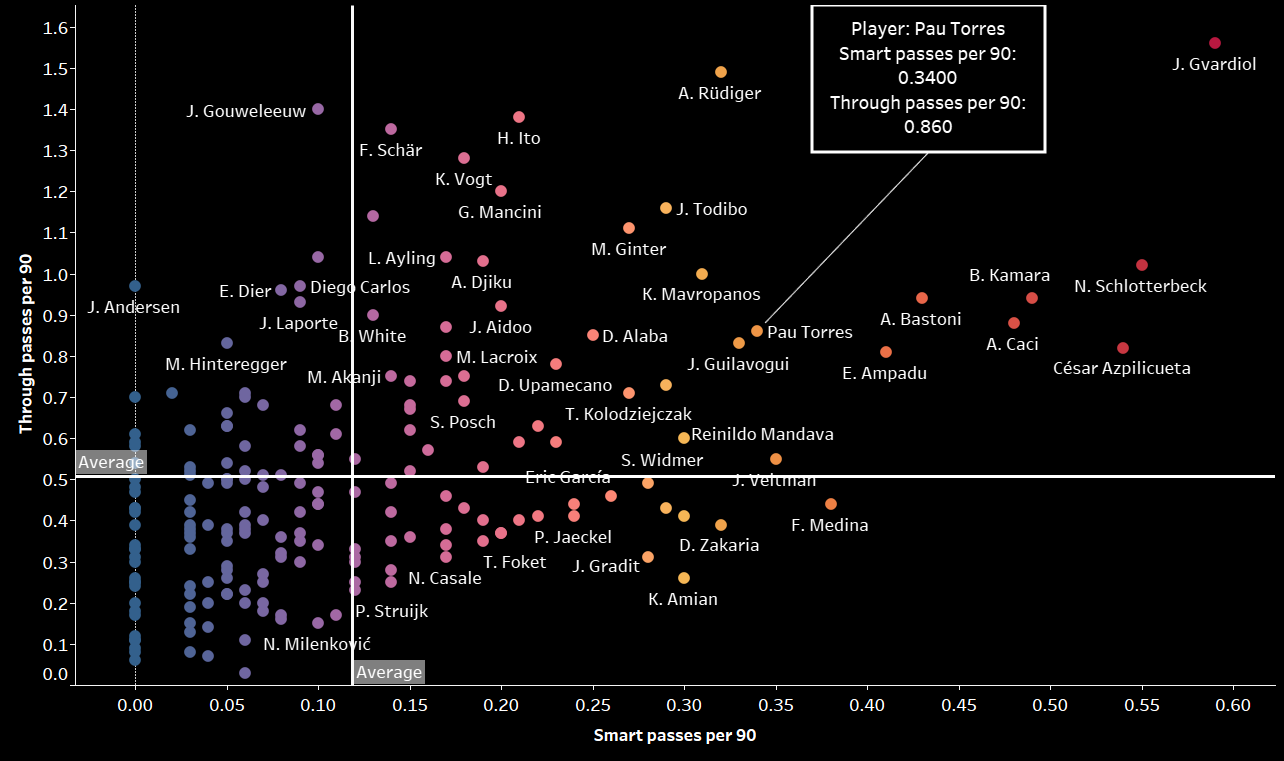 Torres is yet again well above average for these metrics with 0.34 smart passes per 90 and 0.86 through passes per 90, showing that Torres passes don’t just advance the ball up the field, but they look to break and penetrate the defensive line.

We will now look at some defensive metrics however it must be prefaced that these metrics are not necessarily a measure of a good or bad defender but more an indication of defensive style. Many qualities that a defender possesses cannot be quantified, think of anticipation and reading of the game, therefore they may not stand out in some of the metrics.  The first defensive metrics we will address are defensive duels per 90 and defensive duel win%. Here we are looking at the win %, rather than the number of duels as this is more of an indication of whether a defender is engaged or not. Torres engages in very few defensive duels per 90 with 3.96 per 90 however he does have an above-average win % with 69.84%. 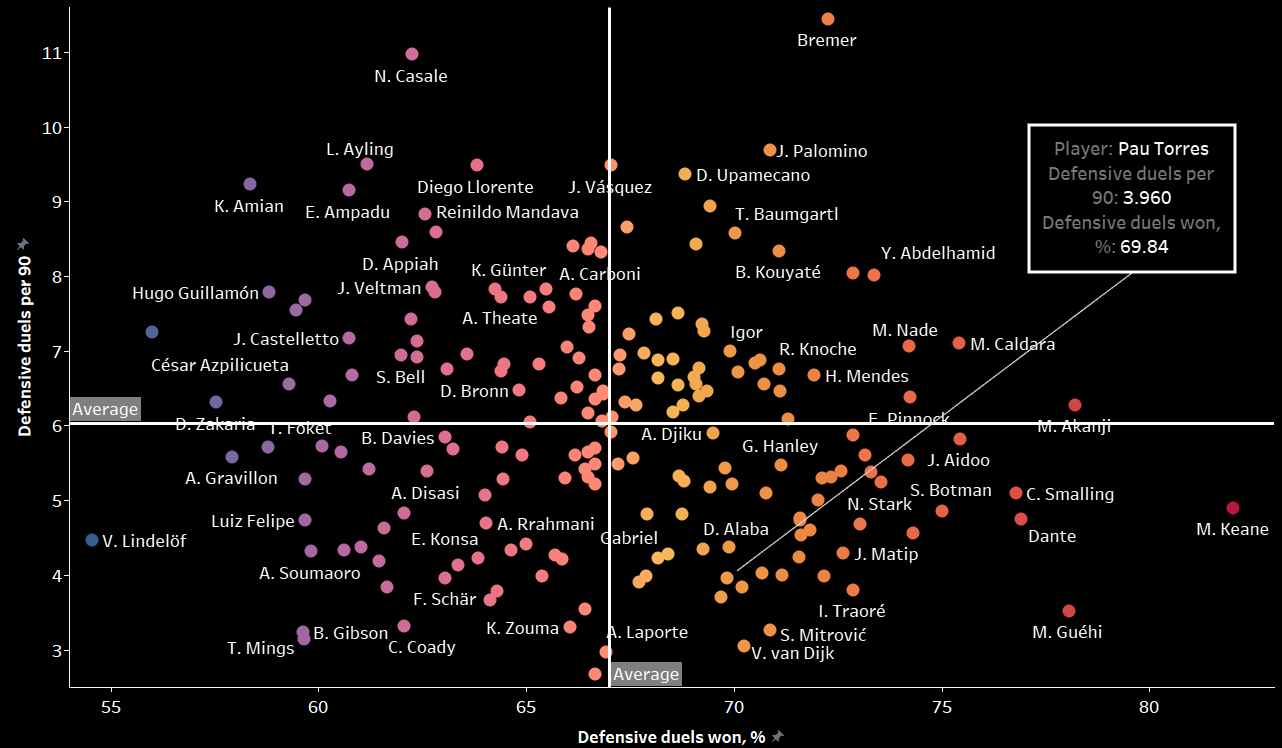 This tells us that Torres is a relatively passive defender, maybe due to good anticipation, however, when he does end up in a duel, he is a strong defender. The next set of metrics we will look at are aerial duels per 90 and aerial duel win %. Similar to defensive duels, Torres is well below average in terms of the number of duels however when he does engage he manages to win them at an above-average rate of 58%. 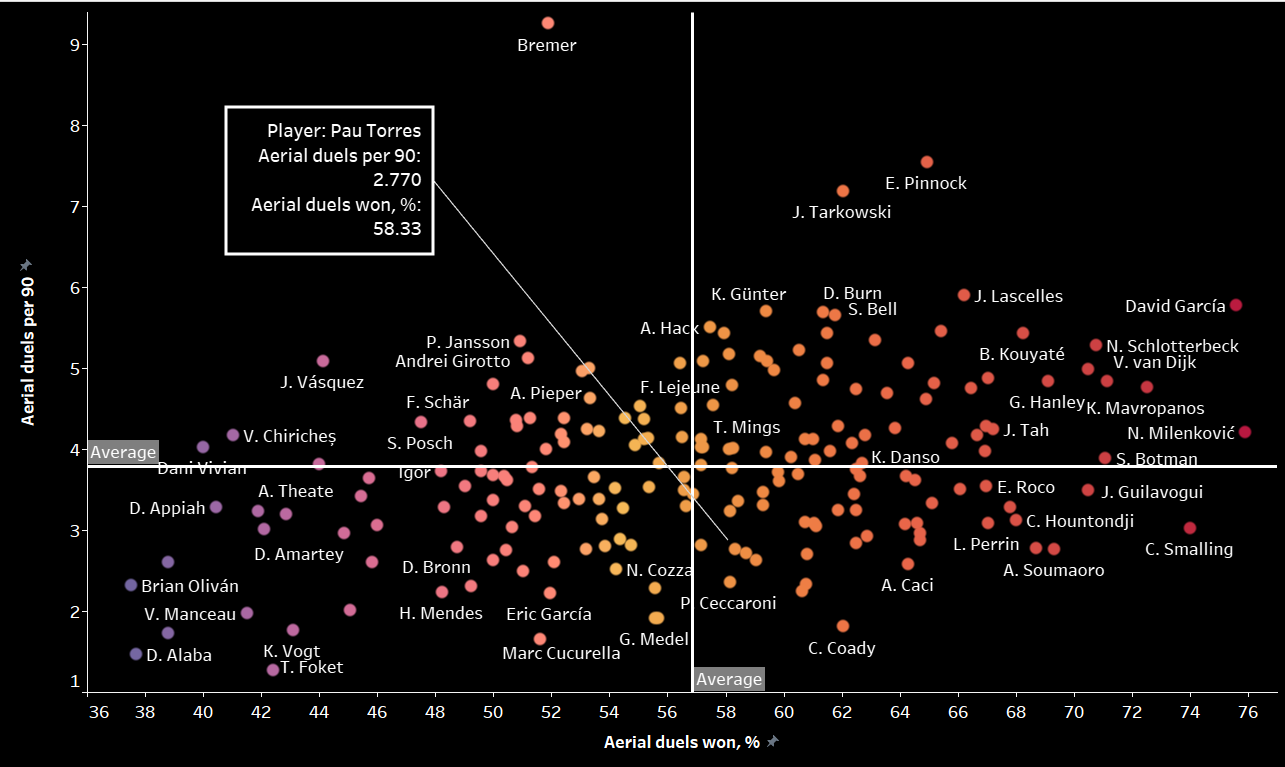 The final data we will address is possession adjusted (PAdj) interception and slide tackles. The reason they are adjusted for possession is to remove the bias raw interceptions and tackles have towards defenders in low possession teams. Similar to the other defensive metrics this isn’t a measure of good or bad but indicates the type of defender and their strengths. 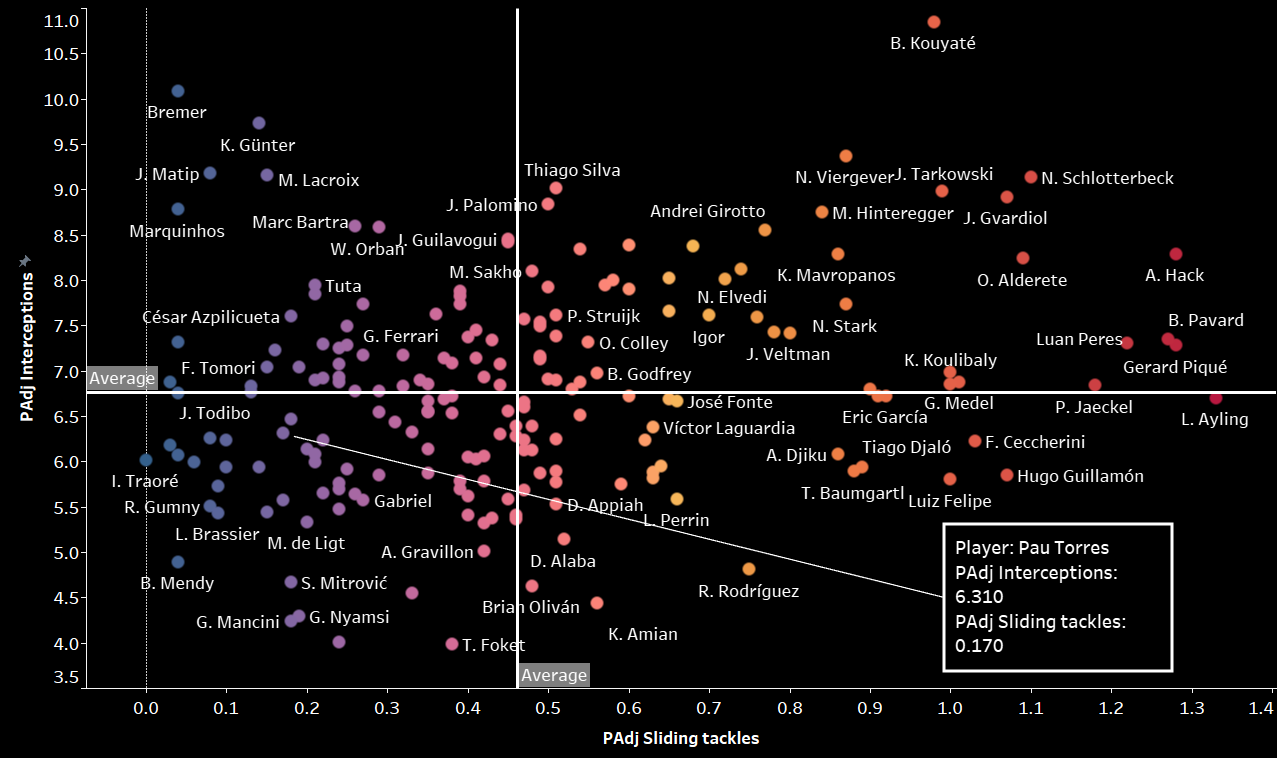 Torres is well below average in both metrics, reinforcing the idea that Torres is a passive defender who rarely engages in defensive actions.

Reading of the game and defensive quality

Torres is a silky defender, using his intelligence, pace, and anticipation to make sure he is in the right place at the right time. This can sometimes lead to his defensive contribution being overlooked as it seems effortless or straightforward when in fact he is defending well by being in the right place at the right time. Below will show a couple of these instances. The following example comes against Bayern Munich in the UEFA Champions League quarter-final, as you can see Bayern Munich are playing the ball between the lines. As this pass is made Sane drops into the little pocket of space between the centre-backs and defensive midfielders.

After receiving the ball, the Bayern Munich man plays the ball inside to Sane. However, Torres identifies this and patiently waits for the ball to arrive at Sane before intercepting the ball in a dangerous area.

The next example again shows the composure and intelligence Torres shows as a defender, against La Liga rivals Sevilla. The ball has been played down the Villareal left side with the left-back caught out upfield. Now Torres has two options, he can go out to the Sevilla man immediately or he can hold off. If he rushes out straight away it creates a significant space in the box, as highlighted. So Torres makes the right decision and holds off.

The Sevilla attacker has a heavy touch which takes him to the byline and then makes Torres’s life easier as he can close down the angle and block the cross. It has also allowed for the left-back to work in and occupy the space left by Torres.

This shows not just his intelligence of Torres, not to just rush out and leave space in the box but also his speed to quickly shut down the Sevilla attacker.

Now the weakness which is thrown at Torres is his physicality, he isn’t like a traditional defender who demonstrates physical dominance. This does result in him being quite easy to play off especially with balls into the strikers’ feet. Torres often allows the striker to gather the ball and subsequently give the opposition a focal point to play off, which could potentially be an issue going forward.  This example is against Juventus’s Dusan Vlahovic. The ball has dropped in midfield and the Juventus player is going to hook a ball into the highlighted space in the Villareal box.

Now Vlahovic gets to the ball before Torres and can simply bring the ball under control. Now Vlahovic is a very strong striker and one of the world’s best, however, this is somewhat easy. He can simply trap the ball and now has two options in the box.

Now whether this is a good or bad thing is up for debate as some coaches would prefer their centre-back not to rush in and be over-exuberant. The next example is from the same game, again up against Vlahovic. Juventus simply play the ball between the lines into the feet of the Serbian striker, shown below.

Torres gets tight but is held off by Vlahovic and he uses this to his advantage and turns away from Torres only to be stopped by a great recovering tackle by Capoue.

Both these examples show that Torres is passive in 1v1 situations and allows strikers to pin him and provide a platform to play off, now this isn’t a bad thing especially if he can make up for this with good reading of the game and recovery speed. However, if something which the opposition can exploit.

Pau Torres is very much a modern-day centre-back who is excellent on the ball and at starting attacks with his wide passing range. He also defends with speed and intelligence, remaining composed in defensive situations rarely rushing in and over-committing. This is in addition to reading the game and making the right decision at the right time.

However, there is the ability to exploit Torres especially up against a physical number nine. The extent to which he is the right man for Manchester United is down to what Ten Haag wants from his team and centre-backs. There is no doubt he will suit Ten Haag in possession and his ability on the ball will shine through. However out of possession, a lot will come down to the tactics and who he plays with, currently, Torres benefits from playing alongside a more dominant presence in Albiol as their styles complement each other.

We also think he would excel in a back three however this doesn’t seem to be the way Ten Haag will play. Torres is a good defender in the right system and team however not 100% sure he is the man to help reverse Manchester United’s defensive woes.