The Champions League winning team of Bayern in 2013 was a clever mix of expensive stars, intelligent signings and most importantly, players from their own youth academy. However, Bayern had a few problems integrating young talents from their own academy in recent years. The last one who became a regular starter at Bayern was David Alaba. He made is debut in 2010 and since 2012, he has been the starting player in the left-back position. However, there is hope for the Bayern supporters. Besides Lukas Mai, the young winger Oliver Batista Meier could be the next big thing.

The young winger is currently playing for Bayern’s under-19 team but was already allowed to train with the first team. Half Brazilian, half German, Batista Meier possesses the stereotypical characteristic of a Brazilian, his dribbling technique. With his speed and focus on the goal, Batista Meier shines through the Youth Academy of Bayern. With the possible retirement of Robben and Ribéry, the Brazilian who plays for Germany could have the chance to jump into Bayern´s first-team squad.

But is he really good enough to become a regular starter at Bayern? I’m going to take a look at his playing style and assess whether this is enough or not.

His biggest strength is clearly his speed. Due to his speed, Batista Meier is hard to defend when he opened his viewing field and can directly focus on the goal. He uses simple body feints and then heavily rely on his speed.

To get into a situation in which he faces the goal a good first touch is needed. Oliver Batista Meier is quite often able to turn by using his first-touch intelligently. Therefore, the recognition of open space and the positioning of teammates is crucial. 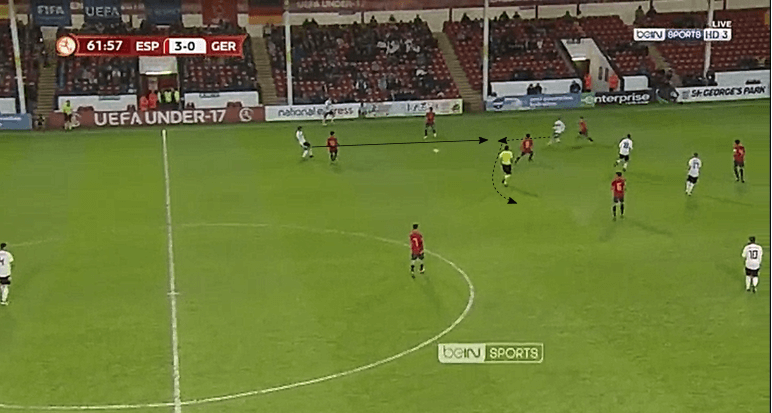 Batista Meier regularly shows signs; however, his game IQ still has to develop further. On a higher level with stronger opponents, the quickness of his decision-making has to improve. At the moment, he occasionally starts to check the situation when he receives the ball, which is too late on the highest level. 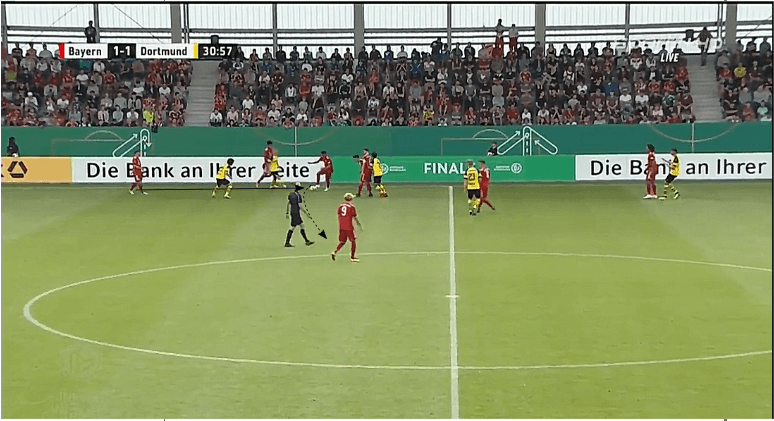 Examining this situation shows us that Batista Meier recognises the space centrally. Consequently, his first touch goes towards this direction. His low body-focus along with his acceleration is hardly stoppable. In that example, the Dortmund player has to foul him.

Furthermore, his dribblings are often diagonal from the left wing towards the centre or even halfspace. Due to his speed and technical abilities, opponents have to step out of the line to stop him. This causes troubles and opens space for his teammates. 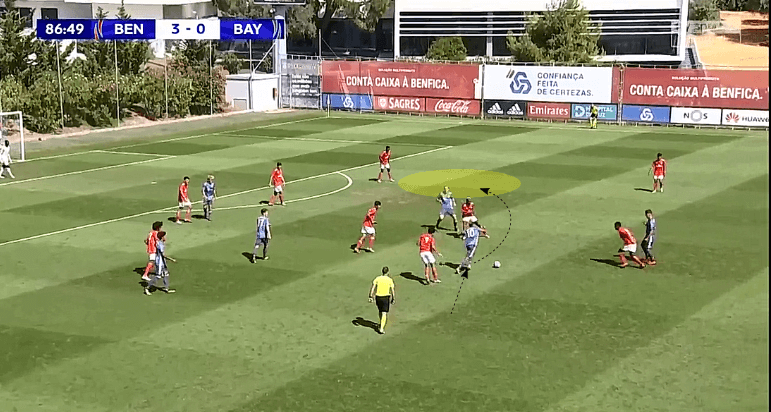 Here, you can see that his Bayern faced a complicated situation against a compact defence. However, space is available on the right side. Batista Meier uses a body feint to pass the first defender and then just simply dribbles around the rest. This draws effectively three defenders on him.

Moreover, the young winger creates most of his shots out of those dribbles. Most of the time, he cuts inside and shoot with his preferred right foot. Even under pressure with only a bit of space, Batista Meier can create something out of nothing. However, his left foot has to improve in order to make him more flexible. Even Arjen Robben sometimes shoots with his right foot. 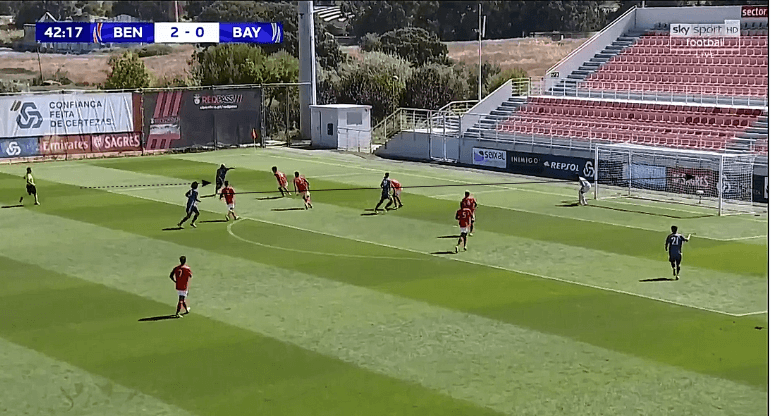 For the future, he can still improve in terms of passes and decision making. If he finds his teammates more often, the advantage created through his dribbling for the team can be further increased, but you could already observe signs of good passing decisions as well.

When I’m looking at fast wingers who are strong in a 1v1 situation, in particular, pay attention to their passing and decision making. It is easy to collect a few highlights and create one of those crazy 1v1 Youtube videos. However, the potential world-class winger distinguishes from the good one in his decision when to dribble and when to pass. Oliver Batista Meier already showed some nice passes out of his dribbling. Occasionally he misses the right moment to pass the ball or stop his dribbling but overall does he understand that he attracts so many opponents which leaves space for his teammates. 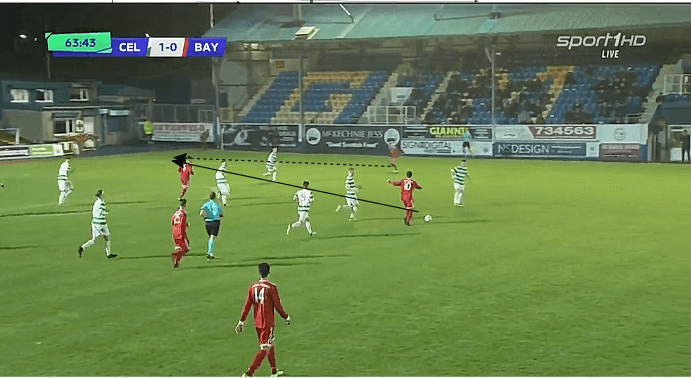 This is one of our favourite scenes from Batista Meier. He starts his dribbling in the left halfspace and moves more or less horizontal. However, this forces the opponent to shift to the other side. On the far side, Batista Meier can find more open passing lanes. Especially, Celtic’s left-back is in a disadvantageous position. He has to look for the ball and his opponent simultaneously. Batista Meier recognizes those problems and plays the ball behind the last line which immediately causes problems although the Celtic defence can clear that ball.

Furthermore, Batista Meier can also play passes without really stopping his dribbling. Sometimes, he plays the pass with his backheel or he chips the ball in the open space behind a line. 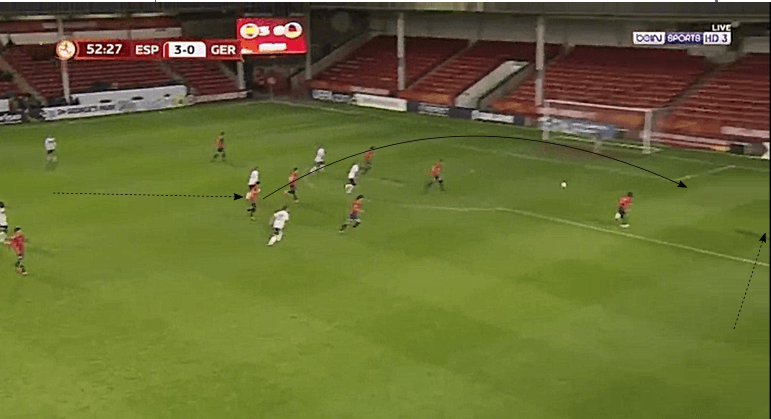 Again, his dribbling is diagonally and attracts a lot of opponents. The weakness lays behind the opponents left back. The chip pass was certainly not easy and the example shows that Batista Meier clearly has the ability to use the space he creates through his dribbling. 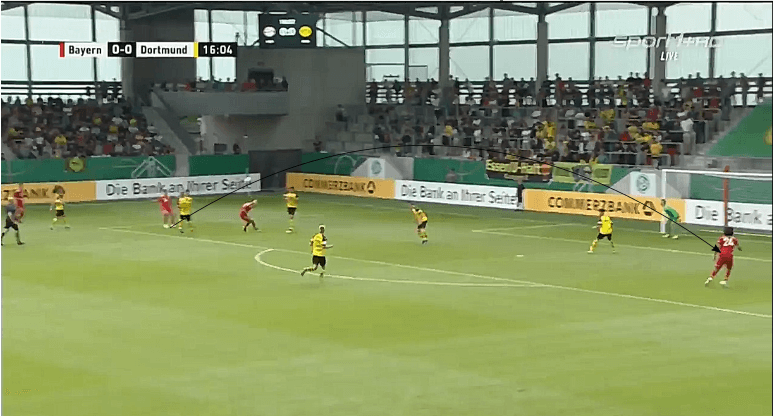 The positive sign, that he sometimes knows when to stop his dribbling and instead pass the ball to his teammate. The passes are not always the most accurate on earth, however, the fact that he sees those passing options generates the impression of a high football IQ.

Small problems, his movement without the ball

Of course, Oliver Batista Meier is a young prospect and still plays for the Bayern youth teams. Besides his physical attributes, his movement without the ball has to improve to make him effectively on the biggest stage of German football. Usually, Batista Meier is most dangerous when he can sprint behind the defence and receive a through ball. Or he waits in a wider position for the ball in order to start one of his dangerous dribbles.

Sporadically, Batista Meier struggles to time his runs. Either he starts too early or he does not use the available space. Especially, the latter is observable. He likes to cut from a wider position into the centre, however, in counter-attacking situations, he does not open space for himself before he starts the run.

In this situation, he decides to sprint into the space between the defenders. Though, the forward-stepping defender covers most of it with his body. This creates a complicated passing angle and Bayern can’t take advantage of the counter-attack. Of course, when a full-back would make a vertical run on the left wing, Batista Meier’s run would have made sense because it creates space. But, in that situation starting the run later would probably be the better option to increase the available space. 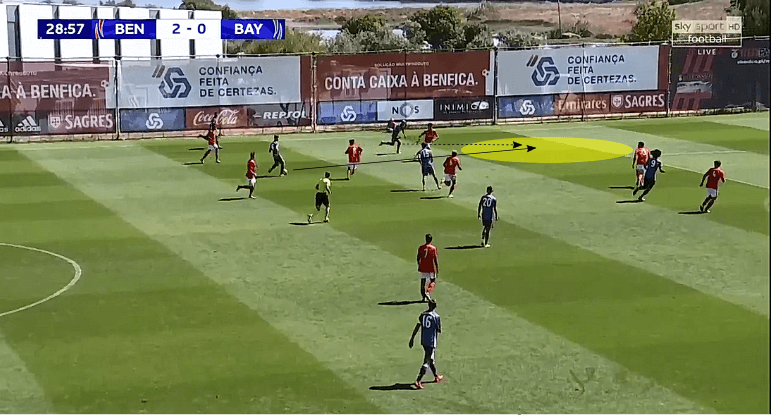 Here, you can observe the best situation for Batista Meier. His defender is focused on the ball, the winger moves behind the full-back to make it even harder for the defender. Batista Meier accelerates in the right moment and Bayern manages to get behind the last line.

Oliver Batista Meier is justifiably one of the biggest hopes at Bayern. His good dribbling together with his speed and his skill in front of the goal makes him a valuable player who can certainly play in the Bundesliga. If he can further improve his passing and movement without the ball, Batista Meier would be a player who is hard to stop because he can hurt a defence in different ways. However, his injuries could avoid a bigger career. After a long pause at the beginning of the season, the guy born in 2001 is injured again. Hopefully, those injuries won’t stop his career and he can develop into the player everyone hopes he could be. Bayern fans are desperately waiting for the next player out of the Academy to make it into the starting eleven.