After analysing two strikers Mirko Marić and Antonio Čolak from Osijek and Rijeka, we decided to make scout report on one highly valued 18-year-old centre-back: Mario Vušković. Vušković plays his debut season for his hometown club HNK Hajduk Split. This scout report will consist of: tactical analysis and data analysis.

In 2018 The Guardian highlighted Vušković in their ‘’60 of the best young talents in world football born in 2001’’ article. Vušković got his playing time increased when Igor Tudor came as a coach in winter and changed formation to three defenders. Serie A giants Juventus, Napoli and Lazio already showed interest for tall centre-back, some of English Premier League clubs as well. Some of the defenders from 1.HNL that were transferred in young age to Champions League quality clubs in recent years are Jozo Šimunović to Celtic, Filip Benković to Leicester City, Tin Jedvaj to Roma and latest one Boško Šutalo to Atalanta.

Mario Vušković is an 18-year-old right-footed central defender. With a height of 189 cm, it is easy to spot him on the field. What is impressive for Vušković is his technical and passing ability. Vušković is still in the growth phase and he needs some time to learn to use his body more effectively to win more duels on the ground and in the air while adjusting to senior football as well. 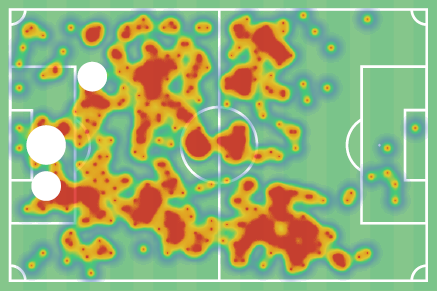 His heatmap is unusual for a central defender and it is a product of his progressive runs with the ball. His ability to contribute for his team when in possession is the main reason why he is in demand. Vušković showed maturity this season and determination which is a quality sign for his future development. The next image is made by Matchmetrics. Matchmetrics calculate their own Effective Play Indicators (EPI) for each player from thousands of positional event data points, using big data algorithms and machine learning. The image compares Vušković to the other central defenders in 1.HNL.

As we can see on the left chart and small bar graphs Vušković has to work on his defensive game because he is below league mean in all metrics except aerials offensively (metrics with ‘’OFF.’’ are made on the opposition side of the pitch). On the right chart and small bar graphs, we can see that he is best in ball delivery and has a good passing range, with only another talented youngster Joško Gvardiol, better than him in short passing.

We will do further tactical analysis on Vušković based on his defensive ability and passing ability. In those sections, he will be compared to 1.HNL central defenders and top five leagues U21 central defenders with minimum 500 minutes played.

We already have insight that Vušković is a ball-playing defender. Let’s see how good is he at progressing the ball compared to 1.HNL central defenders(purple) and top five leagues U21 central defenders(yellow). 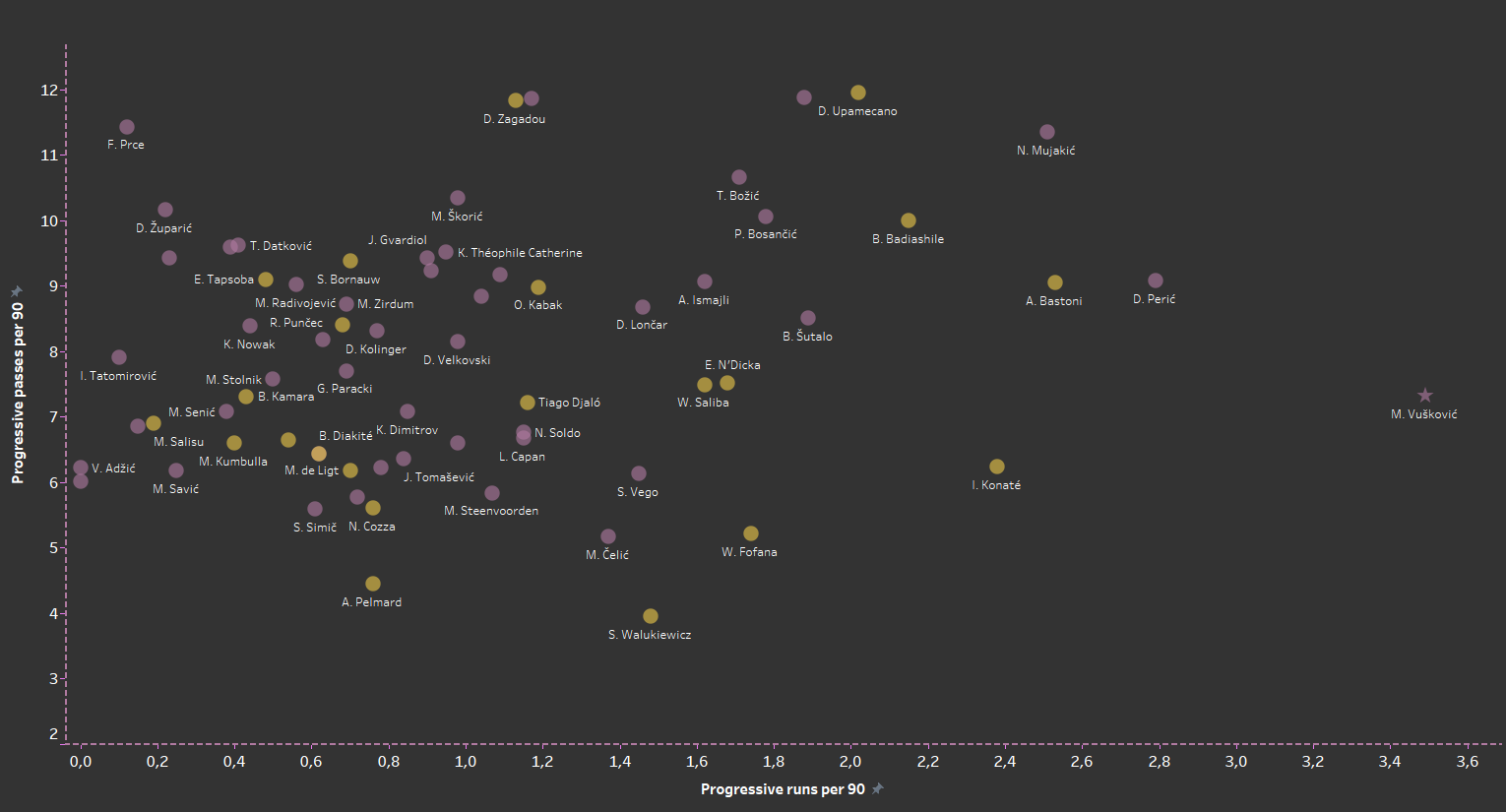 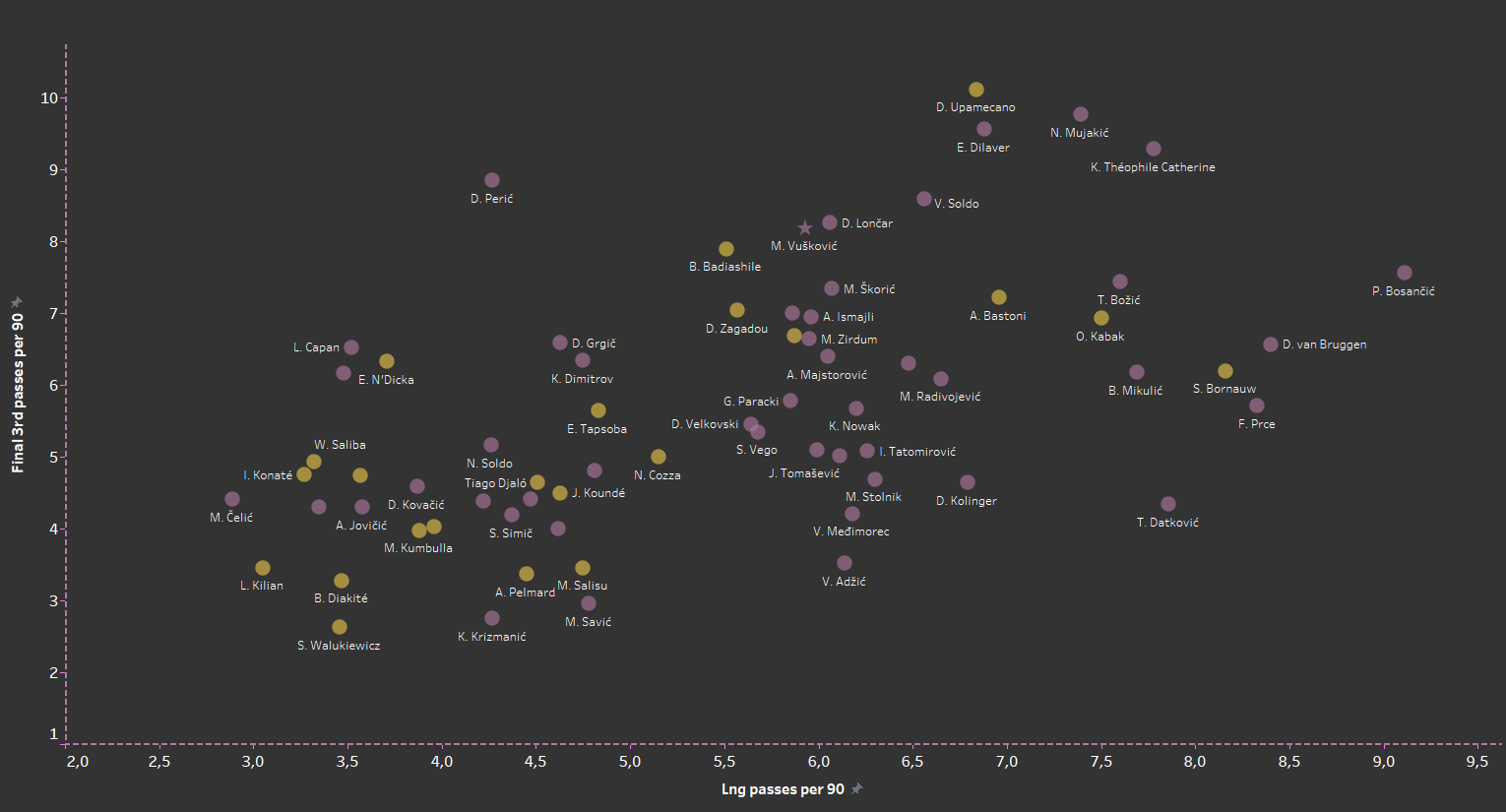 Vušković is above average in both metrics, attempting 5.93 long passes per 90 with 55.88% accuracy. He is attempting 8.2 passes into the final third 90 and he is one of eight players who attempt above eight passes into the final third per 90. Based on these metrics we can assume that Vušković is advanced passer of the ball at such a young age. What he does well is that he recognises forwards running behind the defence and he has the ability to make that pass. The example below will show us one situation where Vušković passing range and vision are on point. 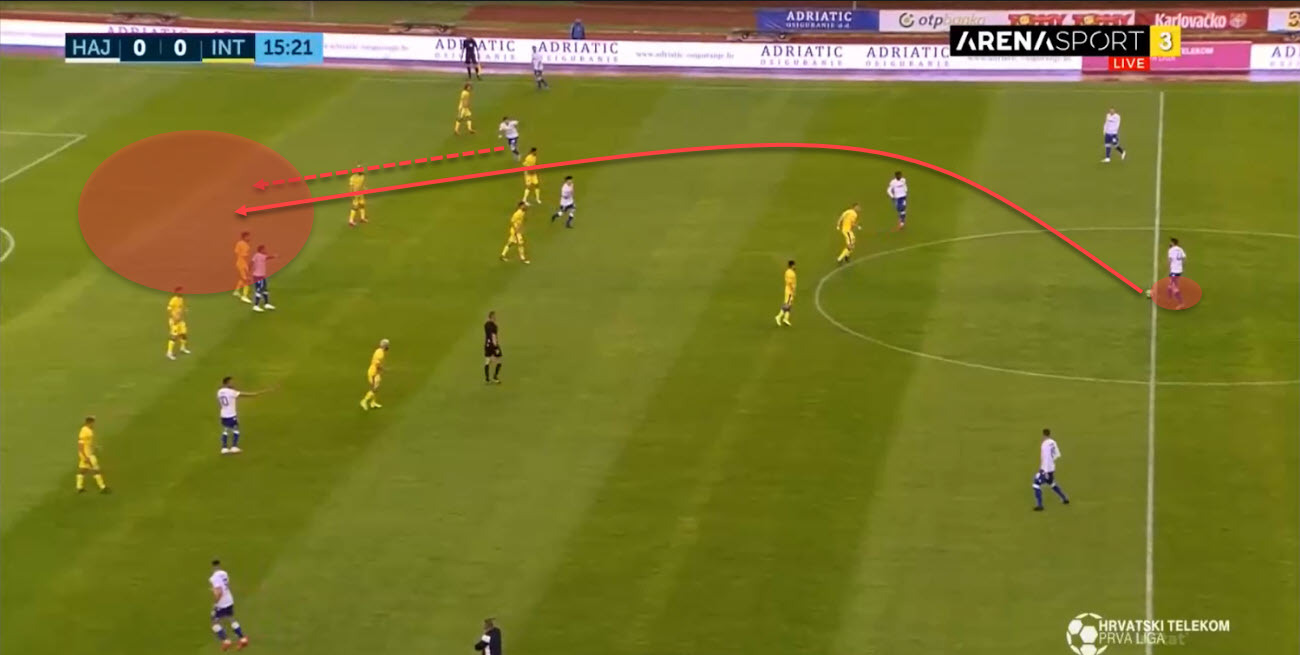 On the first image, we can see that Vušković recognises teammate acceleration towards opponents backline. The second image shows how Vušković makes a perfect pass into the penalty area which is a goal chance if his teammate made a better first touch. The opponents’ backline stands at around 35 metres from their goal and Vušković exploited that with a great pass, we can see him as someone who can start counter-attacks as well given his qualities. Next example shows how Vušković reception of the ball triggers forwards to instantly make run into open spaces on the pitch.

Two forwards start running and he makes successful pass playing through ball to the left side. What is impressive about Vušković is his confidence, he doesn’t hesitate to make a pass into the final third even if it is riskier one. Hajduk form in post-COVID is really bad and Vušković is one of the very few bright spots in recent weeks.

In this section, we will take a look into Vušković defensive abilities. We will compare him to the other players like in the previous section. The first comparison will be based on successful defensive actions per 90 and possession adjusted interceptions per 90. 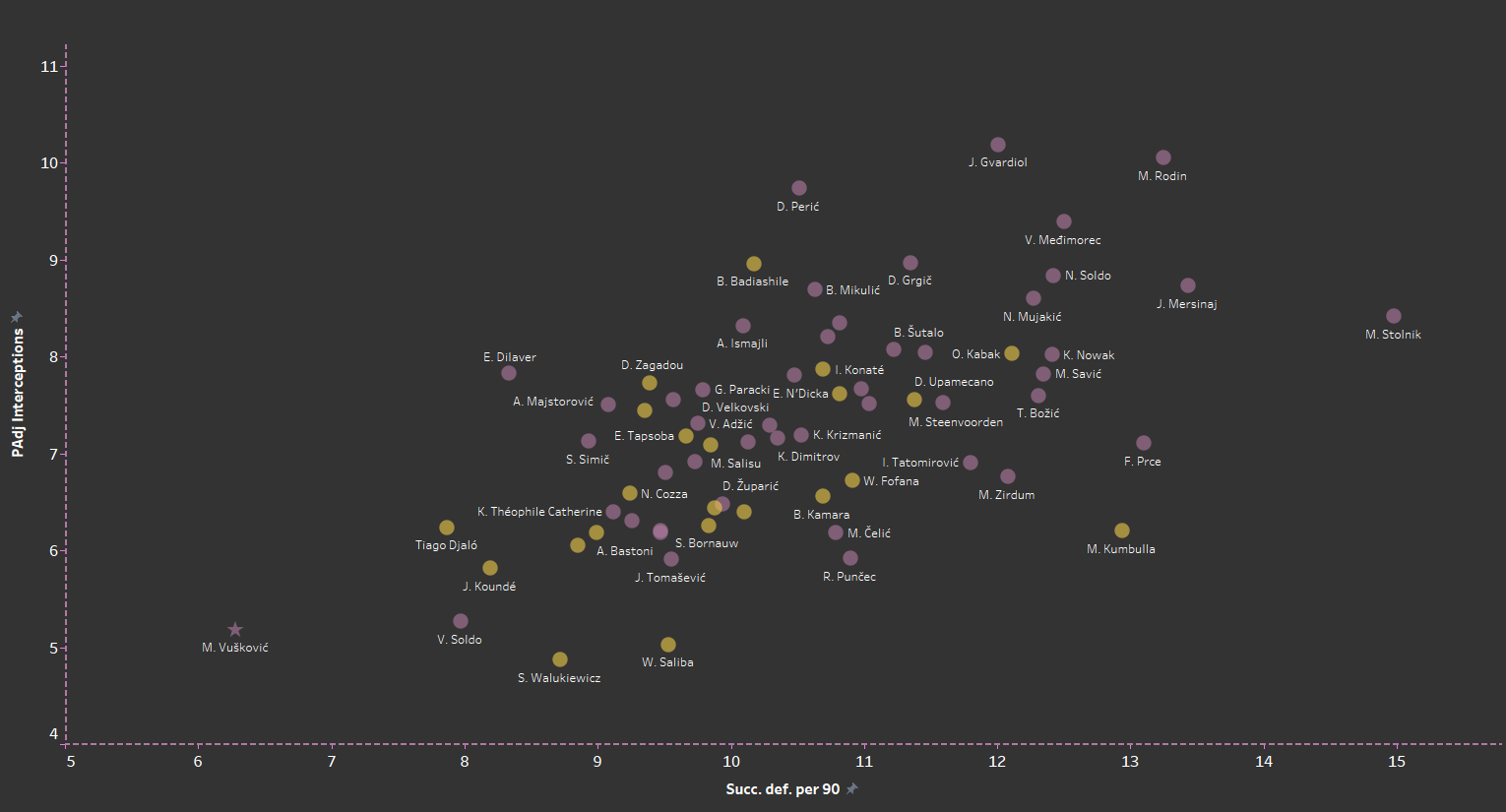 We can see that Vušković is the worst in successful defensive actions with 6.28 per 90 while all the other players are above seven. He is averaging 5.19 PAdj interceptions per 90, he looks bad in that metric too with only Walukiewitz and Arsenal talented centre-back William Saliba worse than him. It is not promising to see his numbers, but we have to take into account Hajduk bad run of the form and constant changes in starting XI which makes the job harder especially for defenders. We want to see how good is he in his aerial duels compared to the others. The graph below will show us aerial duels per 90 and aerial duels won percentage. 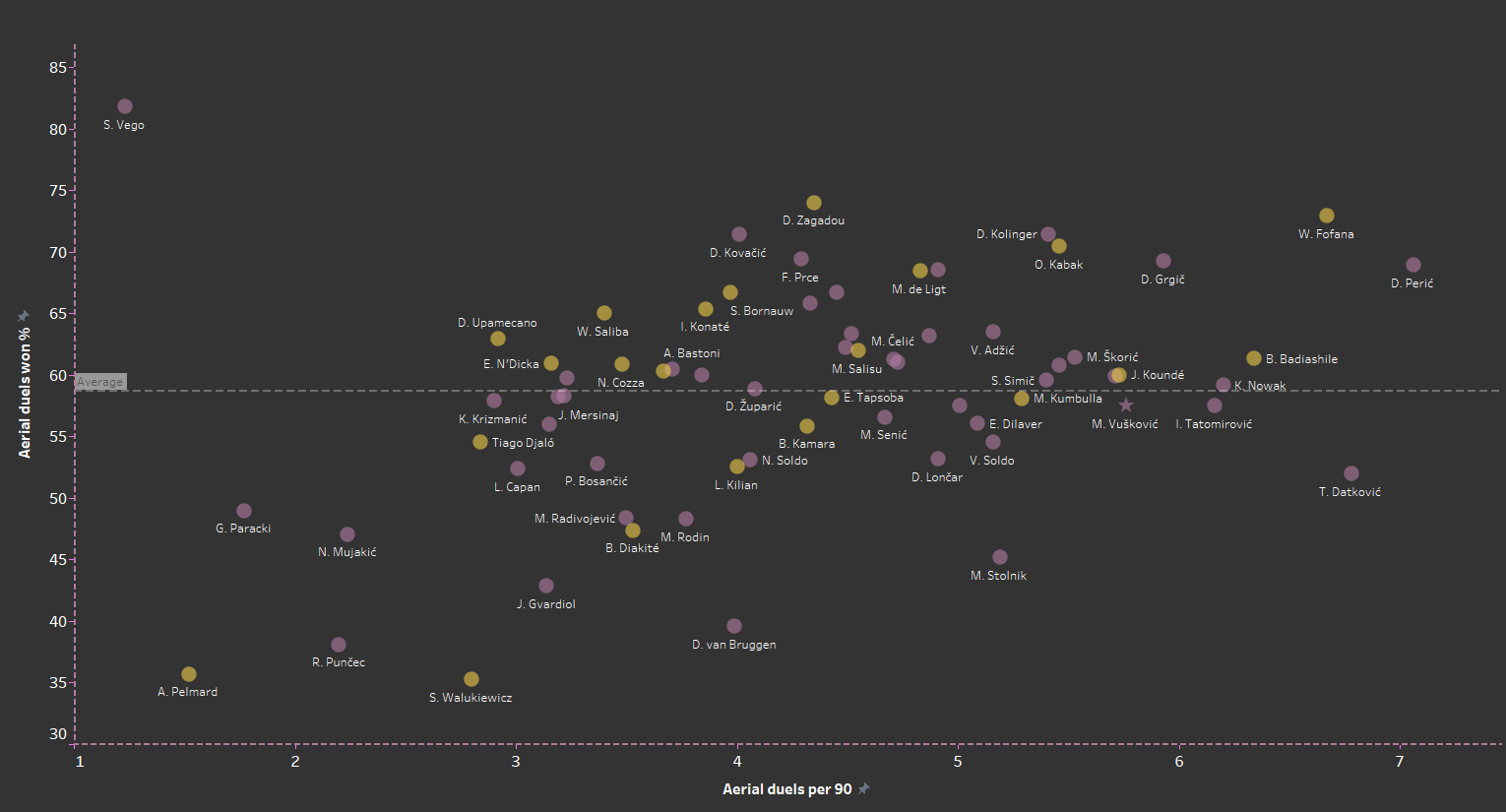 Vušković is averaging 5.76 aerial duels per 90 and he wins 57.58% of them. In 1.HNL most dominant are Lokomotiva skipper Denis Kolinger who won 71.43% of his 5.41 aerial duels per 90 and Croatian international who plays for Dinamo Dino Perić who is averaging 7.06 aerial duels per 90 with 68.91% success rate. Because of his frame, Vušković will get better in the air through the time when he adapts to senior football and playing against stronger and higher forwards each week. The example below will show that Vušković reads the game well when defending and makes key tackles when needed. 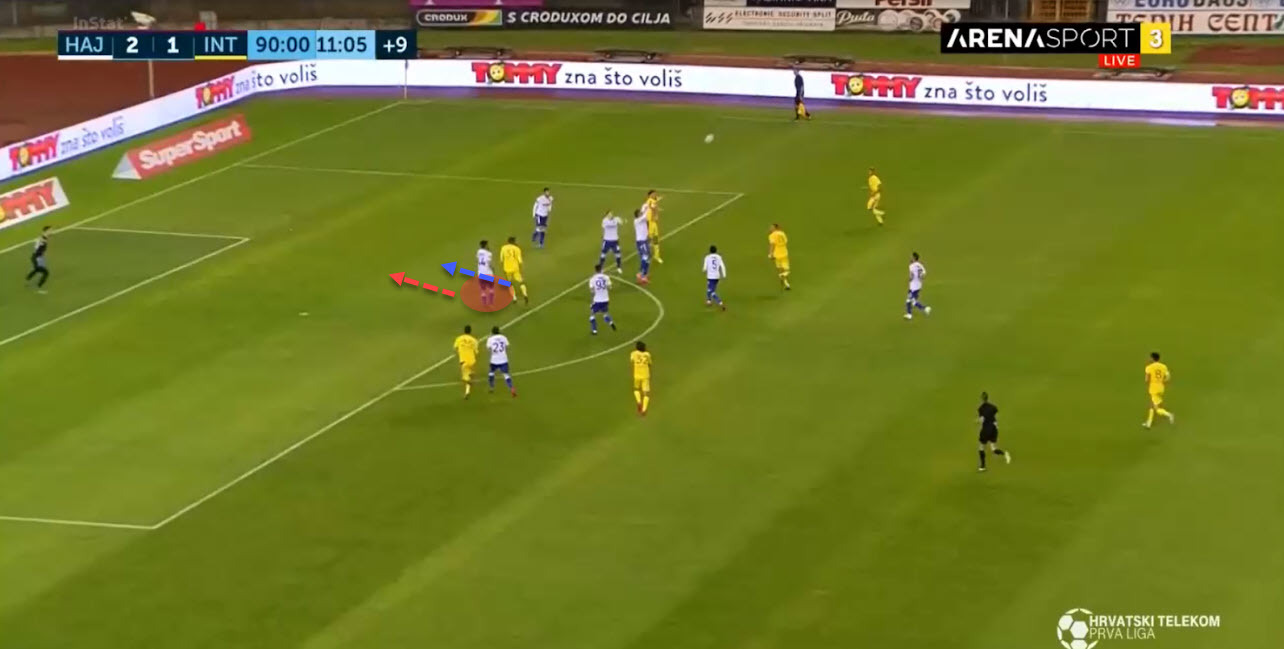 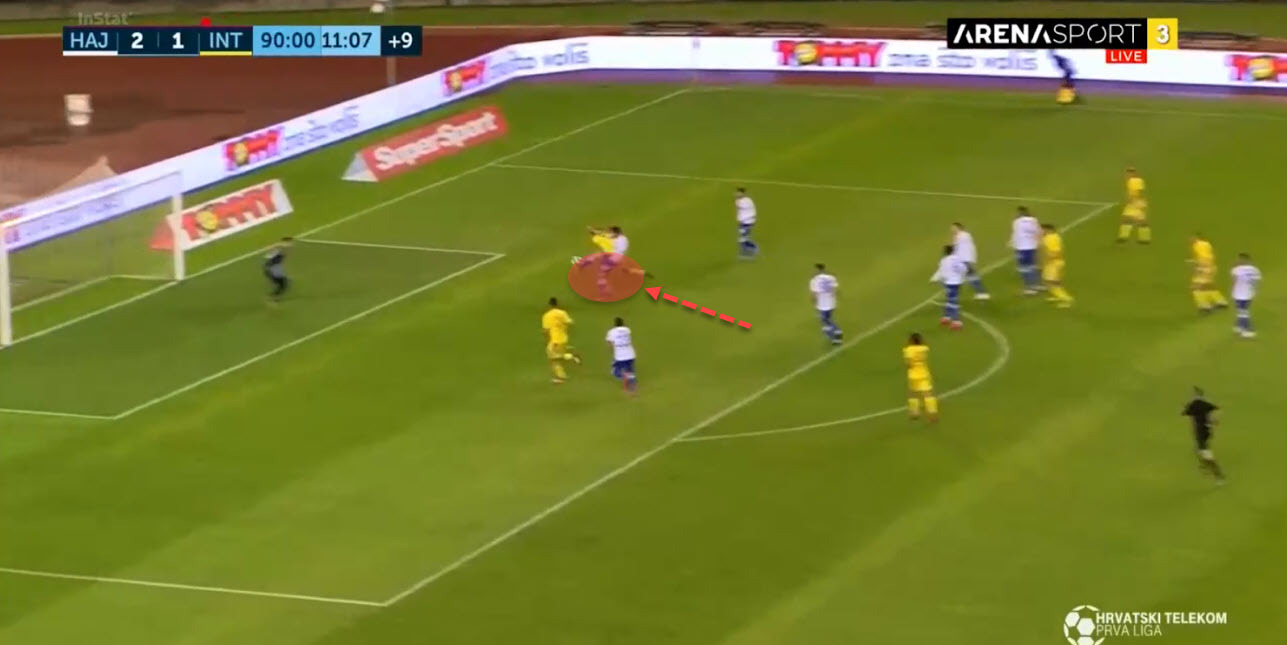 He marks opponents number 31 closely because he saw that one of his teammates stands in the penalty area which prevents possible offside after the header and he makes key tackle before number 31 makes a shot. In the next example, Vušković once again makes key tackle blocking the shot. 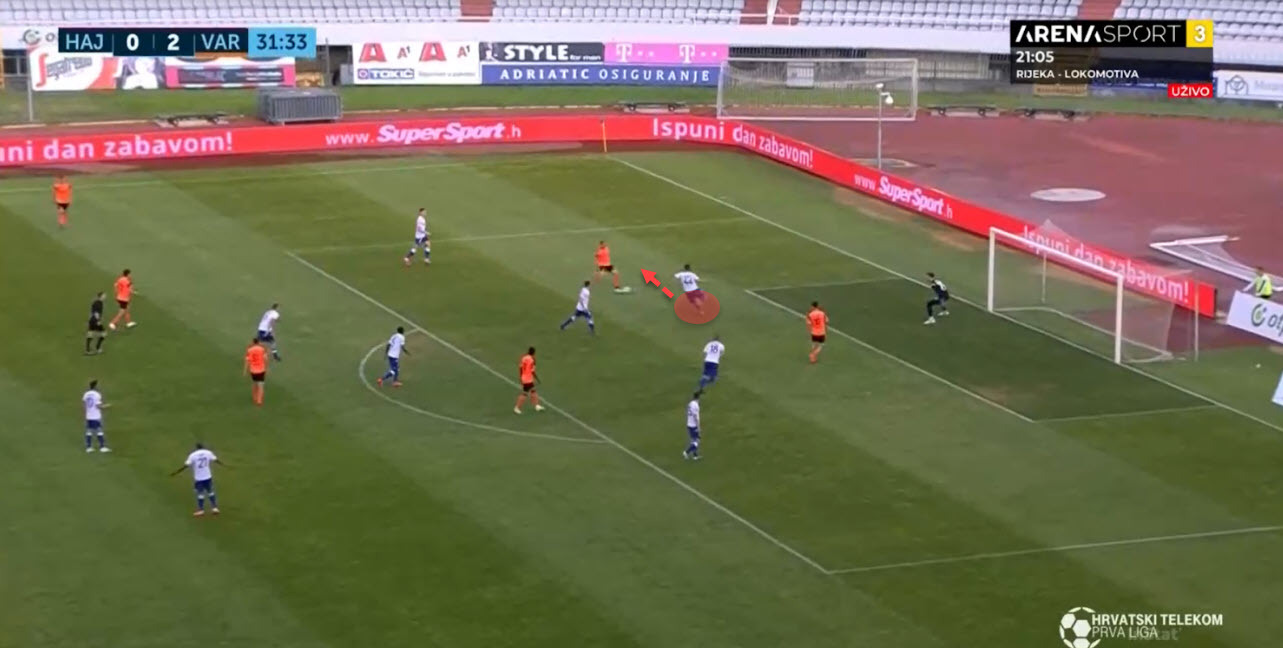 Hajduk goalkeeper Posavec deflects shot to an opposition forward who shoots instantly, but Vušković anticipates that and tackles to block the shot. With his intelligence, he will certainly grow into a better defender because he already shows matureness and mental strength.

Vušković currently plays in a team which faces a lot of problems: fans want a coach to resign, media often puts pressure on the team and we can conclude that Hajduk is a currently unhealthy environment for promising young players to grow. Because of those reasons and often changes in starting XI especially in defence and Vušković only played seven matches this season, it is hard to see something as his weakness that occurs often. Based on metrics we can assume that he needs to have more success defensively while his aerial duels success rate will rise with more senior match experience. It would be harsh to make some other conclusions on his weaknesses based on a small sample of games. He clearly has potential because he shows matureness at such a young age and it is no wonder that European giants are after him. Hajduk should give him a lot of playing time to support his development. Keeping him at least one more season before selling him could prove crucial for Vušković’s development and Hajduk would probably make a bigger income than selling him this summer.