Arsenal Women had a much more low profile summer transfer window in comparison to their league rivals. Having seen the likes of Pernille Harder, Lucy Bronze, Alex Greenwood, Christian Press, and Tobin Heath all enter the FAWSL, Arsenal opted for a different approach. Joe Montemurro signed players familiar to him from his native Australia with Caitlin Foord and Lydia Williams two of his major signings. However, they did also make a signing that future proofs their midfield and in Malin Gut they identified a player with vast potential.

The Swiss international is touted as a rising star and one that will be considered great in years to come. In this scout report, we will look at why she’s so highly regarded and examine the attributes that make her such a promising midfielder.

Malin Gut is a 20-year-old progressive defensive midfielder who moved from Grasshopper Zurich to Arsenal over the summer of 2020. Capable of playing as a central or defensive midfielder, Gut has the versatility to play in a midfield double-pivot or as the deepest lying player in a three.

The young Swiss international is an excellent ball carrier and passer whose role is more of a playmaker than a destroyer. Taking up the role of a regista, Gut represents a player that is very capable of fitting into Arsenal’s tactics as she’s able to pick up possession from deeper areas and play it forward. This is one of her outstanding skills alongside her passing range and press resistance on the ball. 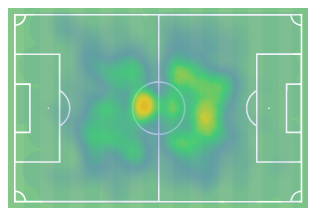 She has decent positional awareness which comes from her playing in a delicate area of the pitch and is enthusiastic off-the-ball given how she likes to press players that is shown through her heat map above. Gut is a defensive midfielder by nature but is no stranger to moving up the pitch if the opportunity presents itself in either an attacking or defending capacity. The rest of the analysis will look to break down these skills and explain them in more detail to provide a more holistic perspective.

Gut is an excellent passer of the ball and arguably this is where she thrives the most. Being a progressive defensive midfielder, Gut needs to have a good range of passing to be able to recycle possession and create goal-scoring opportunities. Being such a good passer, Gut has shown herself to a variety of long passes, short simple passes, and riskier through balls.

We often see the Swiss midfielder in central positions laying the ball off to her more attack-minded midfielders to find the openings and as we’ll see later in this analysis, is press resistant, which makes her a potentially excellent defensive midfielder.

At the time of writing Gut averages 51.43 passes per 90 minutes (85% accuracy), 1.17 through balls per 90, 1.87 long passes per 90 (69% accuracy), and 4.79 passes to the final third per 90 (71% accuracy). All of these figures point towards a healthy frequency of passes and a good variety. What’s most prevalent is the success she has in making these passes which is impressive for a 20-year-old midfielder. 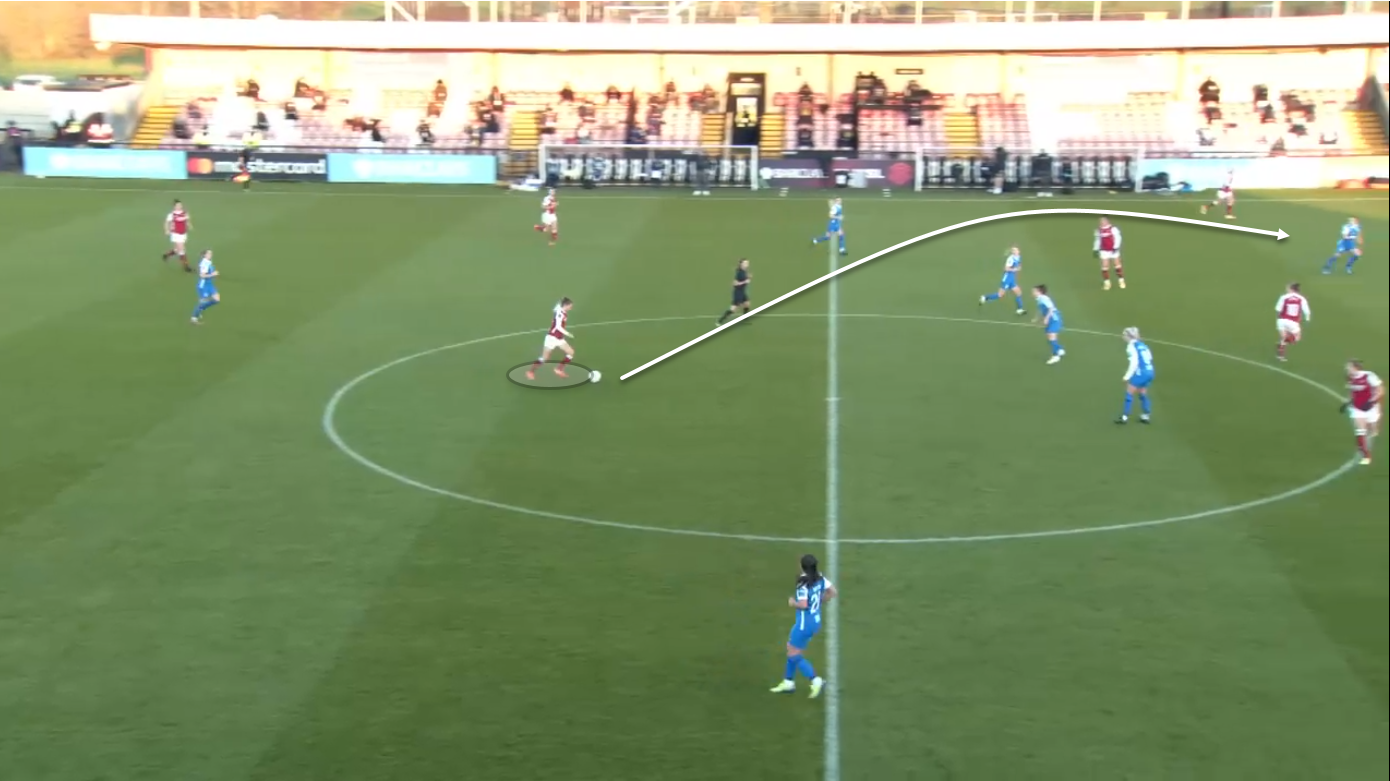 The example shows us how quickly Gut can take the ball from defence to attack from her ‘regista’ role. When she gets possession from one of the centre-backs she’ll often step forward and keep going if she’s afforded space as she has been in this situation. Gut will look towards the wide players and try to identify the best option and in this case, she found the left-winger which puts Arsenal in Birmingham’s final third. This creativity and vision is what makes her riskier passes much more effective. The combination of them both is raw but potentially lethal.

It is her vision combined with her passing that is very impressive and given that she knows how to pick out a pass and break down teams means she can join in the attacks if need be. There are games where Gut will be much higher up the pitch and this passing range becomes much more effective in helping to break down teams as well as progress play. 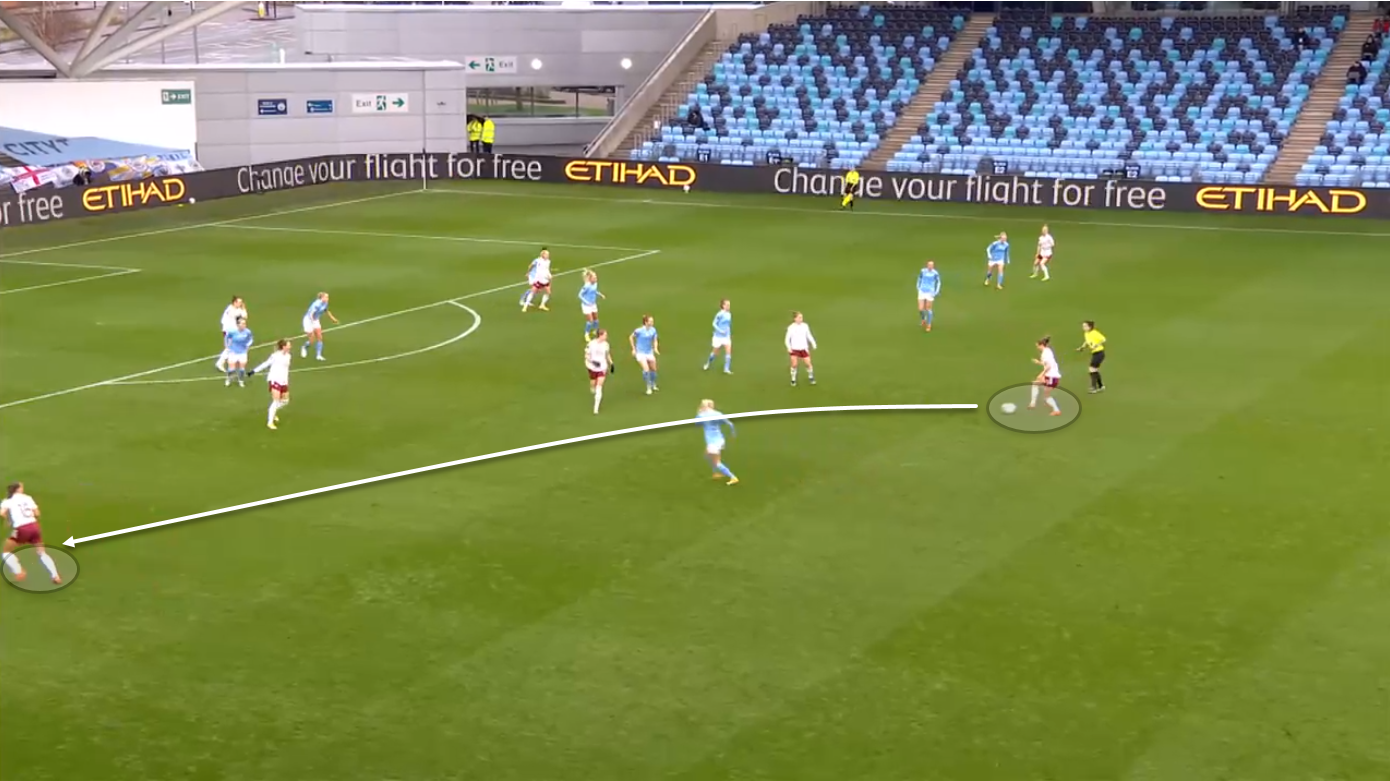 As the above example showcases, Gut is a central position on the ball against a compact Manchester City Women’s team. Given she needs to be quick and resourceful with the time she has on the ball, Gut manages to find Katie McCabe in a wide position taking advantage of the space left vacated by City. This pass allows Arsenal an alternative point of attack and opens up City slightly given their central compactness.

Part of being a deep-lying playmaking midfielder is the player’s ability to pick up possession and progress the ball forward as well as having good movement. A lot of modern players have both of these skills in abundance and are able to effectively be the team’s fulcrum from which the ball can be played forward. In Gut, Arsenal are in possession of a talented young midfielder with the potential to become just this. At first glance, Gut is someone who is efficient and strong on the ball who fits Arsenal’s style of play.

Montemurro’s philosophy and tactics is to want his side to play quick, attacking football using a variety of build-up techniques in which the defensive midfielder is a key component of this. For that reason, Lia Wälti is a regular in the side because of her ability on the ball and to progress. 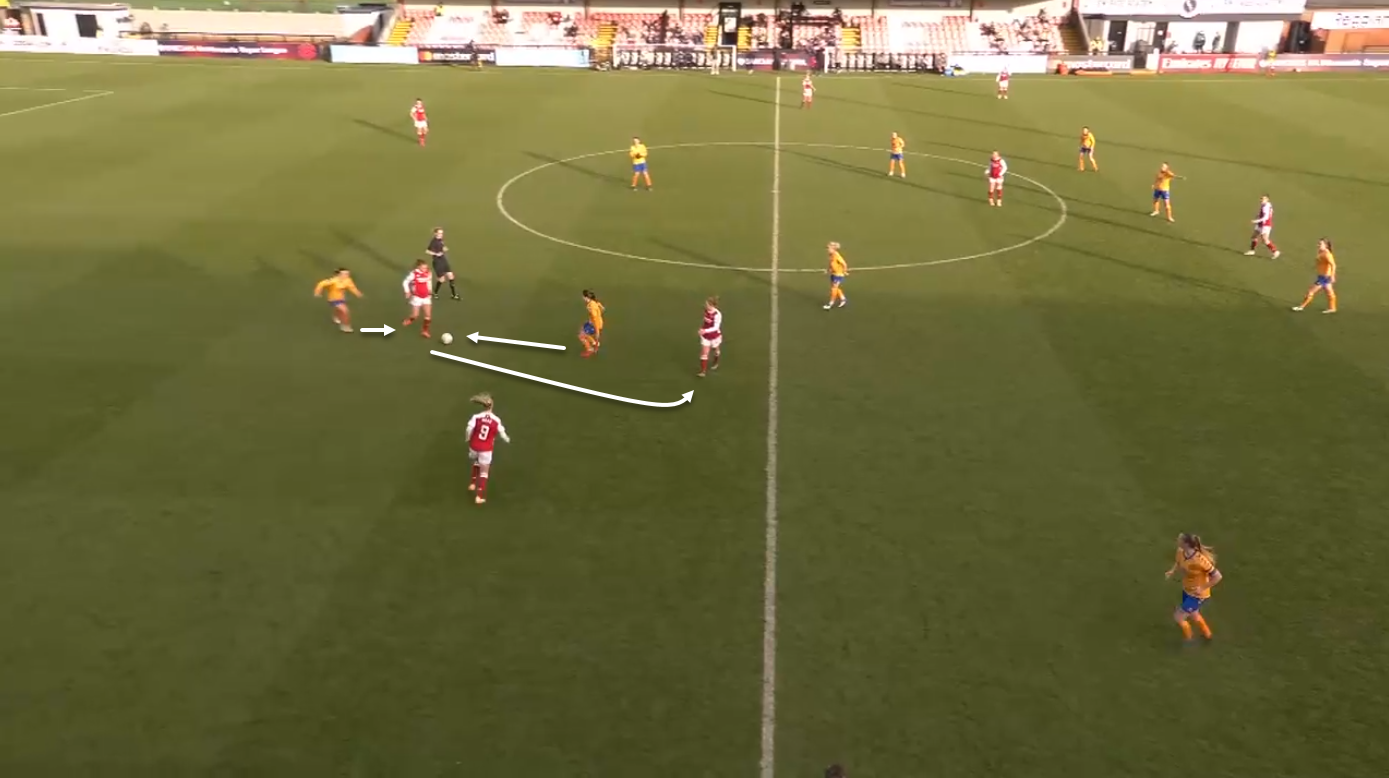 What is most impressive in her movement is her ability to withstand pressure and be press resistant. This is arguably the most important trait in any defensive midfielders repertoire and the above example depicts this. This passage of play against Everton Women shows Gut in a deeper position where she plays a quick passing exchange with Kim Little but is under pressure from two players. A by-product of this is her ability to open up space in behind, allowing Beth Mead and Little more space to operate and push forward. 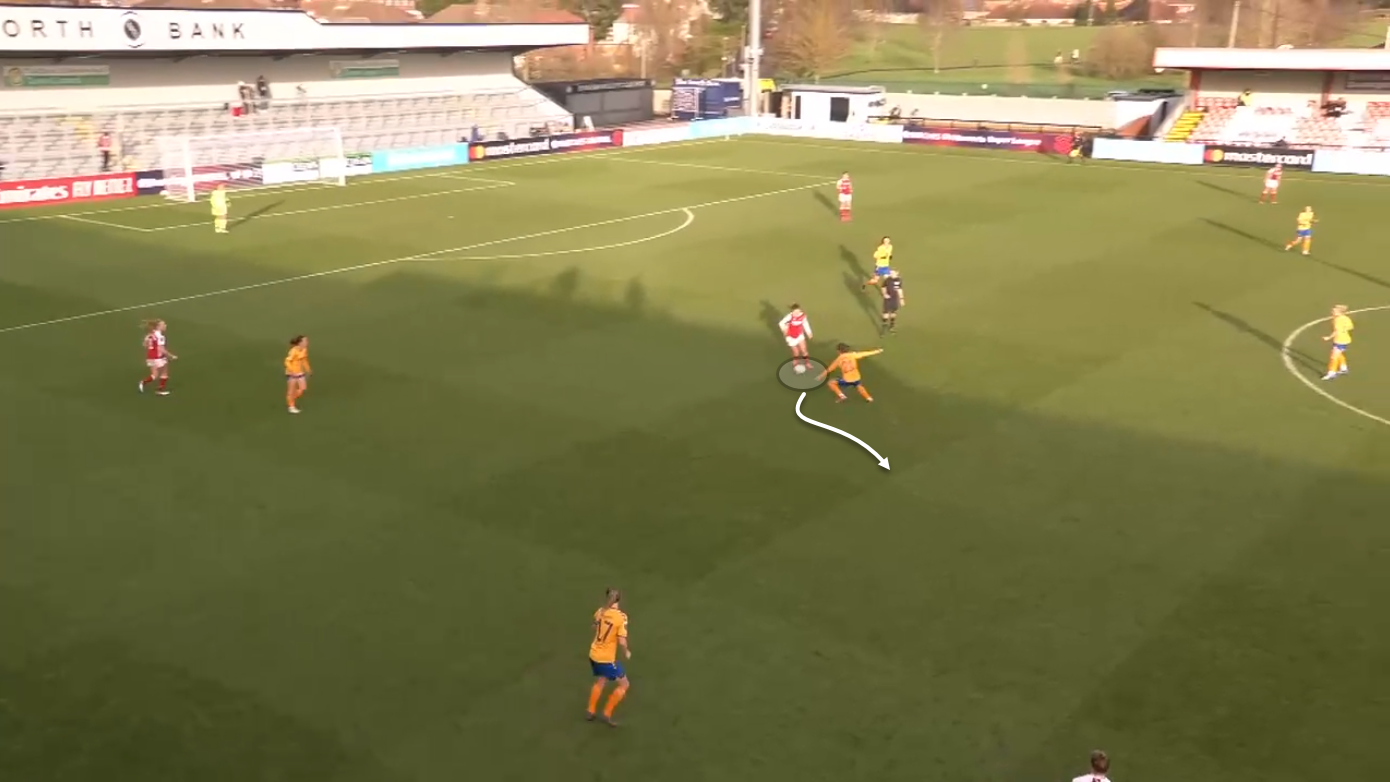 Alternatively, Gut is a decent dribbler which also allows her to take high pressing players out of the game which also results in space being created. The above example is one that highlights this skill. From the same game, Gut is pressured by an Everton player in close quarters but uses a quick side step and manoeuvres herself into space ahead of her where she can find a progressive pass.

From this tactical analysis, we’ve seen how effective Gut has been on the ball but it is off the ball is where Gut is tested the most. She is an athletic player who can move across the pitch with ease making her someone who can cover large areas of the pitch. When it comes to moving into attacking positions, Gut is good at finding space and receiving the ball to be able to pass forwards as we have seen in the earlier sections. However, it’s in defensive areas where she needs to work on her positioning.

Arsenal’s defensive midfielder then becomes a very important cog. Wälti’s success has mainly come from her disciplined positional play which has been key to Arsenal’s success. Gut is an aggressive presser who is more of a forward-thinking defender which means she is more proactive than reactive. She’ll much rather push up and intercept the ball than wait to tackle, though this does need some work which we’ll explain shortly. 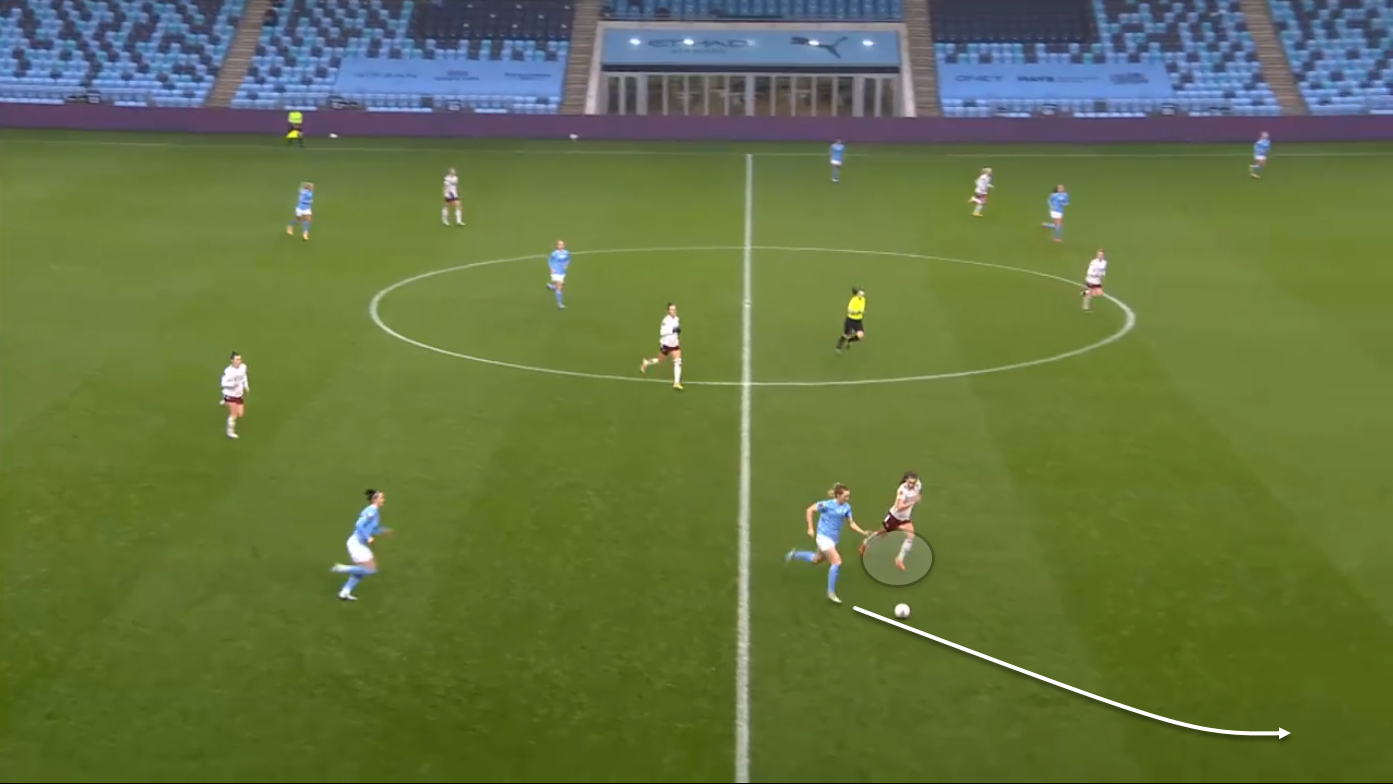 The above example from the game against Manchester City shows Gut’s positioning in a defensive situation. Here she is trying to chase down Sam Mewis and though she’s in a good position to tackle her, Mewis is able to get the ball past her by passing it out wide. 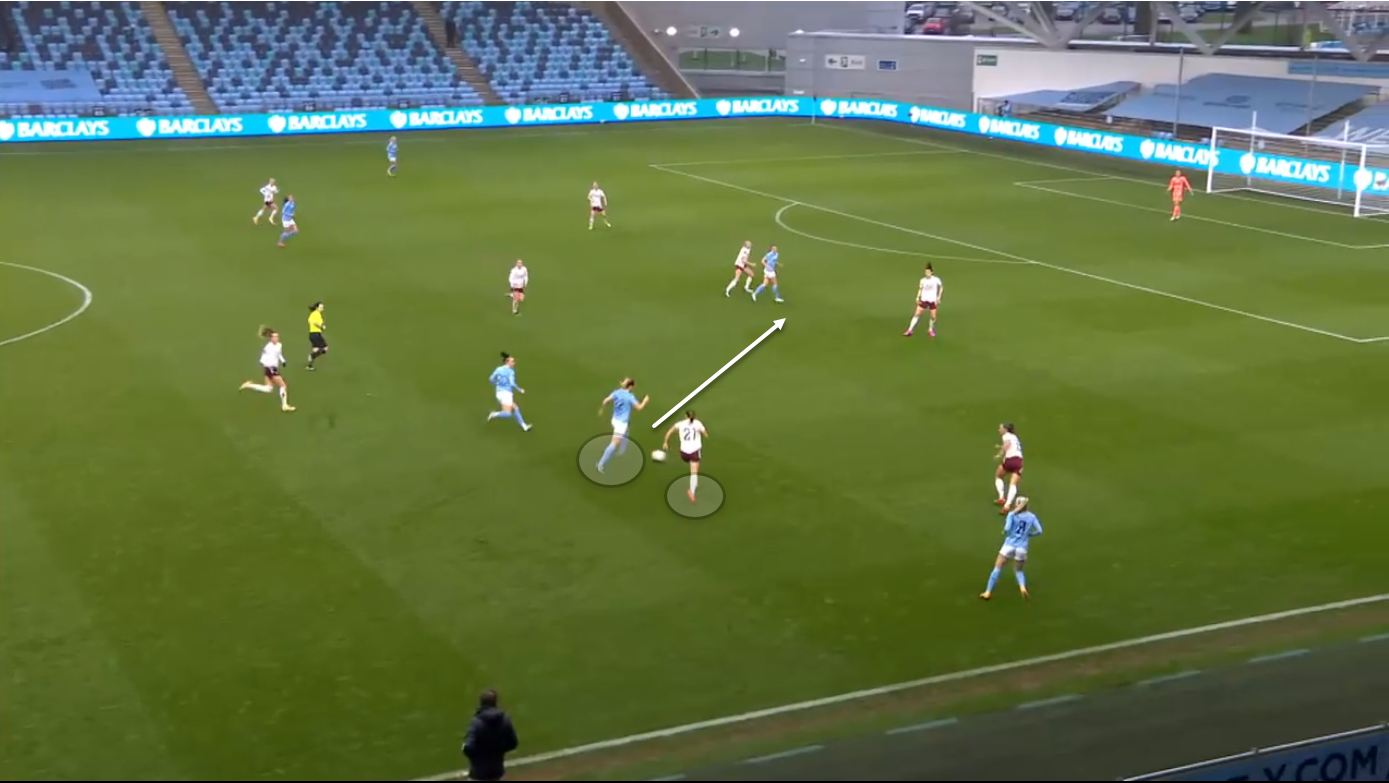 Here, Mewis drives past her after playing a quick passing exchange with Chloe Kelly out wide which puts Gut out of the equation. This leaves Gut chasing shadows and naively leaves space in behind. She should have covered the space in behind once the ball went past her to ensure the attack is slowed down if not halted.

At the time of writing, she averages 4.09 interceptions per 90 minutes, 8.3 recoveries per 90 minutes (49.3% in the opposition half), and 7.01 defensive duels per 90 minutes (60% success rate). What this shows is that Gut has the potential to become a very good defensive player but consistency will come with experience and time.

Gut doesn’t limit her movement to her defensive midfield area, but pushes up if the opportunity arises. Coming up against teams that will sit back means there isn’t a need to sit deep at all times.

If we look at these two pass maps, you’ll notice Gut (#21) is deeper in one and higher up in another which indicates her movement patterns. Against Birmingham City (left) she’s playing a lot higher as is the whole team whilst in the Everton game (right) she’s situated a lot deeper protecting her back four. This sort of movement pattern and understanding is important given the counter-attacking potential of some teams and Arsenal’s tendency to play a high line.

Malin Gut is an impressive defensive midfielder who has the best part of her career left in front of her. Gaining experience under Montemurro and learning from Wälti will benefit her. Given it’s her first season in English football, she will take some time to acclimatise to her surroundings but given her build and ability, there is little doubt that Gut will be a success in an Arsenal shirt.