Benjamin Bourigeaud is a 28 year-old French winger currently playing for Rennes in the French Ligue 1. Bourigeaud is having a particularly interesting season given his outstanding work as a creator for the French side this season. Bourigeaud has made 12 assists in the league this season with only Paris Saint-Germain’s Kylian Mbappe and Lionel Messi registering more (with 13 each), whilst his 11.82 expected assists is the highest of any player in the league. In all competitions for Rennes this season, Bourigeaud has managed to score 10 goals, on top of a total of 15 assists, making him a key player for Les Rouge et Noir. Rennes are having a particularly strong season sitting in third place at the time of writing on 59 points, level with fourth-place side AS Monaco. Bourigeaud has been a key man for Rennes and has played a major role in obtaining this success thus far this season.

This tactical analysis and scout report will provide an analysis of some of Bourigeaud’s key traits whilst suggesting the tactics that bring the best out of the winger.

Bourigeaud isn’t an overly prolific dribbler. He chooses his moments carefully, but his decision-making is of a good quality when attempting them. He frequently uses disguise and hesitation to lull the defender into anticipating him driving one way before darting the other, or he may use his body shape to indicate to the defender he is about to pass, before dribbling instead.

Bourigeaud has a penchant for cutting inside, and he is very comfortable with either foot, despite favouring his right, and as a result, he varies which side of the defender he exits.

Below we can see an example of this as he shapes his body as if to play a pass down the line, before quickly cutting inside into the open space in the middle of the pitch. 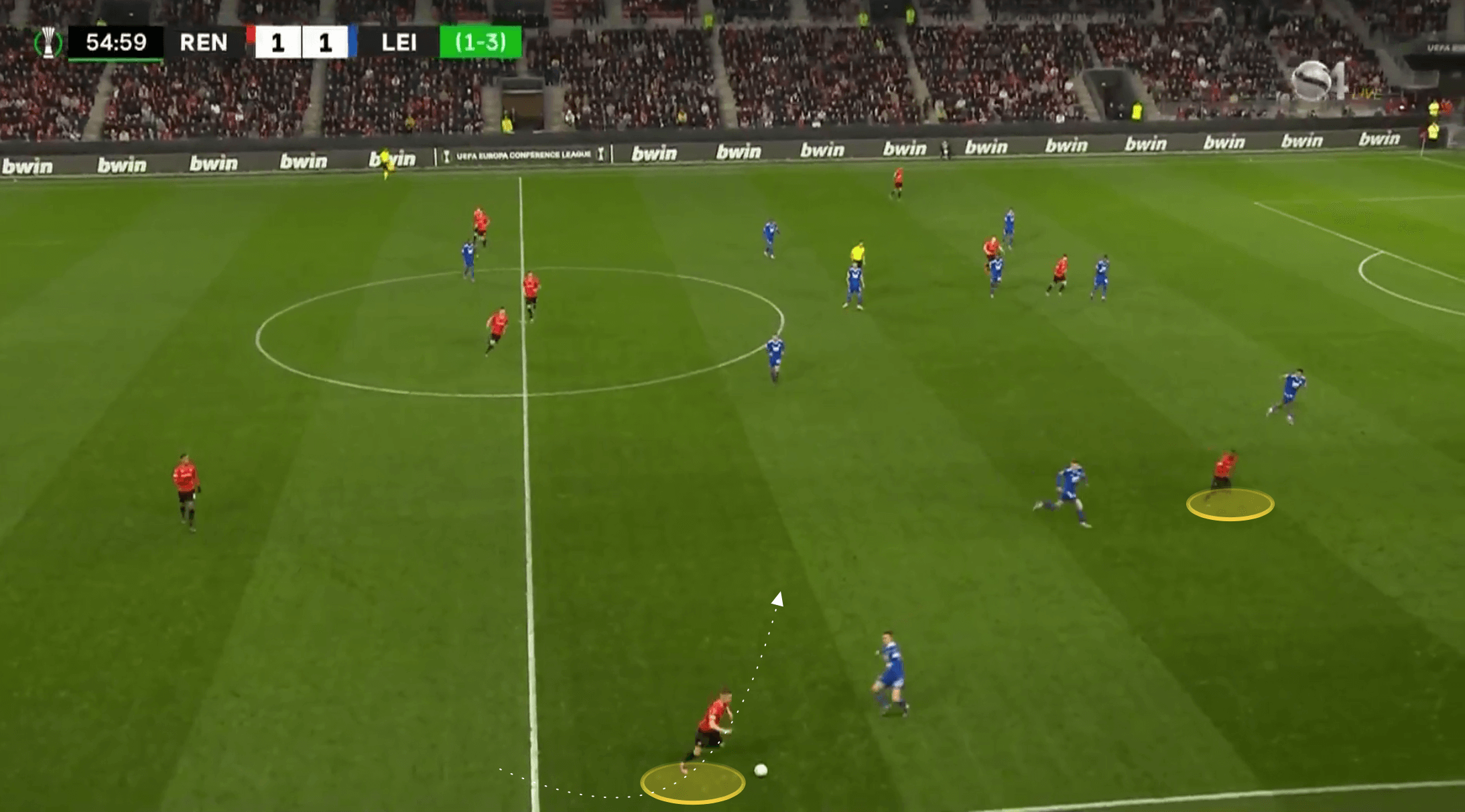 He will make this decision to cut inside very quickly, and his ability to have the awareness of what is around him through scanning on top of his speed when turning to face the opponent is of the highest level.

Below against Premier League side Leicester in the Europa League he receives under pressure, but instantly turns and knocks the ball inside, catching the defender on the flats of their feet.

He does have an impressive change of pace which allows him to break past a defender like in the previous example. However, even in deeper areas, he isn’t afraid to take on a player if he recognises there is space to access. Attacking space with his dribble is his strength as opposed to dribbling in tight areas. Below we see him bravely knocking the ball past the onrushing defender before looping around them on the other side to beat them. 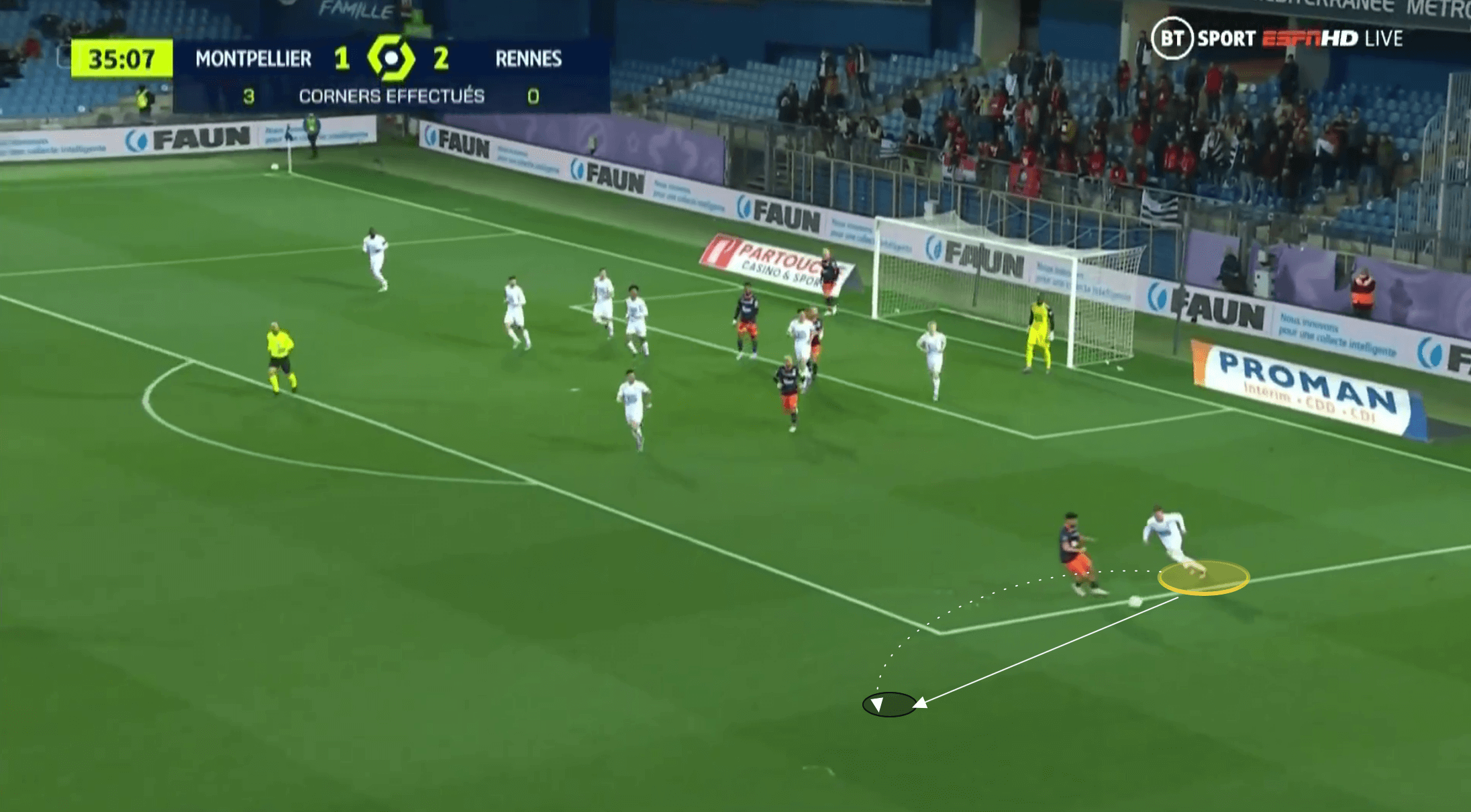 In general, the winger keeps his head up when driving forward, consistently keeping awareness of what is around him, and whilst he doesn’t dribble an overly high amount, his overall decision making on when to do so and, almost as importantly, on when to release the ball, ensures he does an excellent job of retaining possession after a dribble.

Bourigeaud has outstanding vision as a passer and crosser, which perhaps is unsurprising given the volume of assists he made thus far this season. His assists have come from a range of passes from different areas, as well as crossing.

He shows quality composure in the final third and despite scoring regularly this season he has consistently displayed an unselfish streak. We can see this below in a position where most players would shoot from. Bourigeaud shapes his body as if to do so before playing inside to the highlighted player. 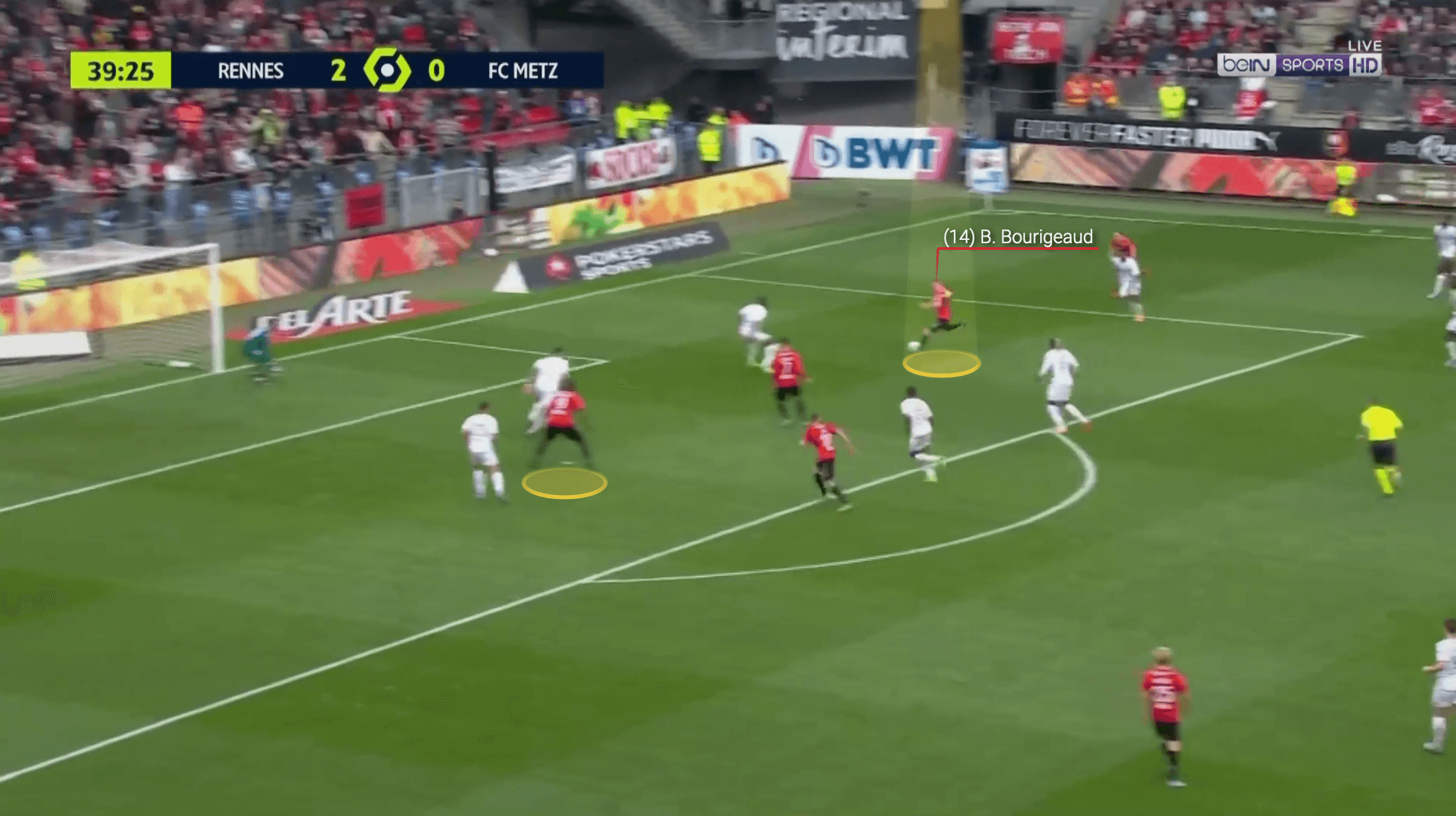 Bourigeaud can time passes in behind, and with his favoured approach to dribbling, cutting inside, he will see runs being made from deep and slide the ball through the gaps in the opposition defence.

We can see him doing exactly this in the image below against Metz, recognising the run of teammate Martin Terrier before placing the ball between the Metz left-back and centre-back. 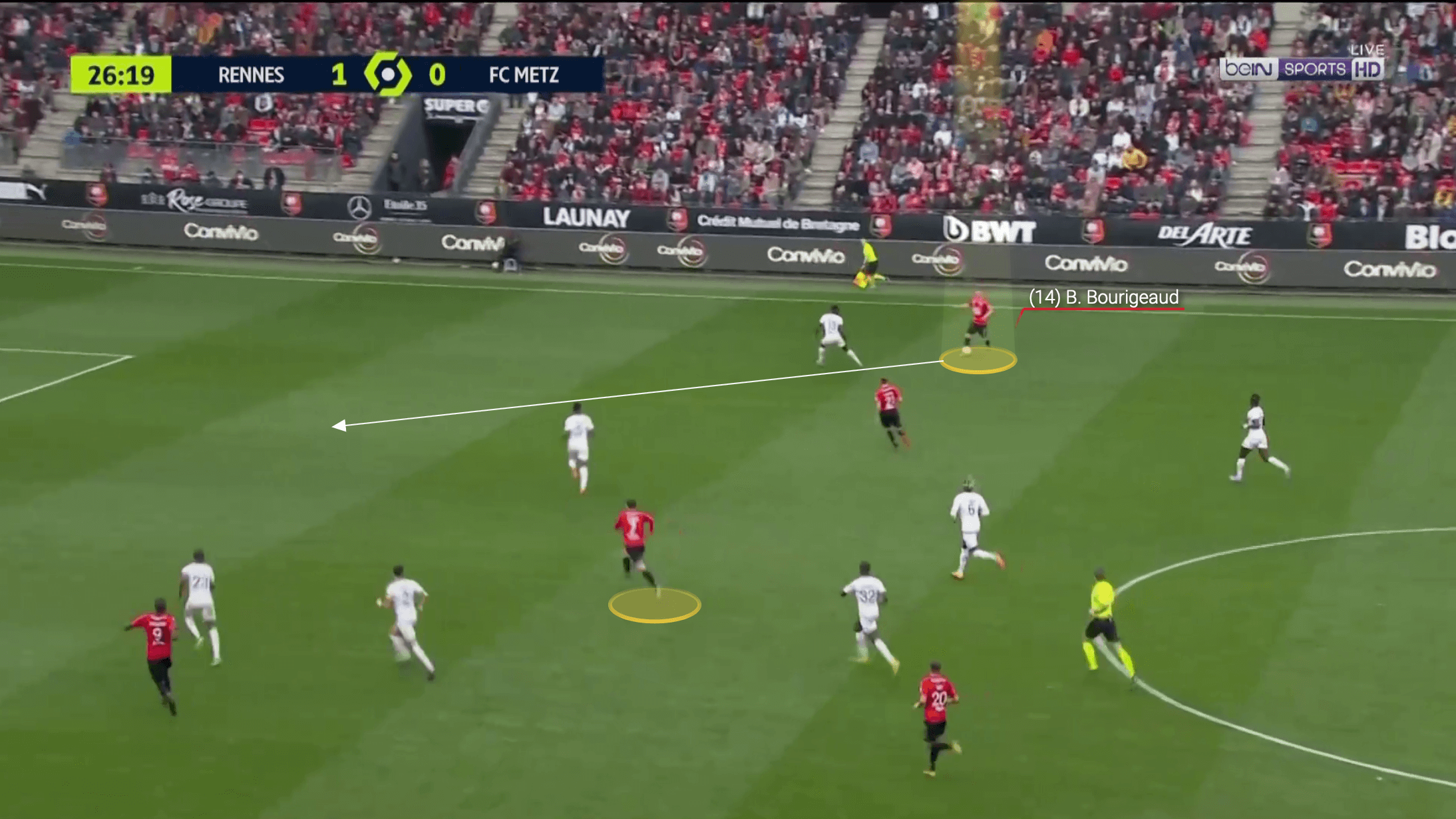 Whilst he played this pass with the outside of his right foot, he is confident playing these through passes with his left too.

Below we can see him cutting inside once more before threading the ball in behind, without indicating to the defence that he was about to play this pass. This season he has averaged 2.21 through passes per 90 with a 45.2% completion rate on these. 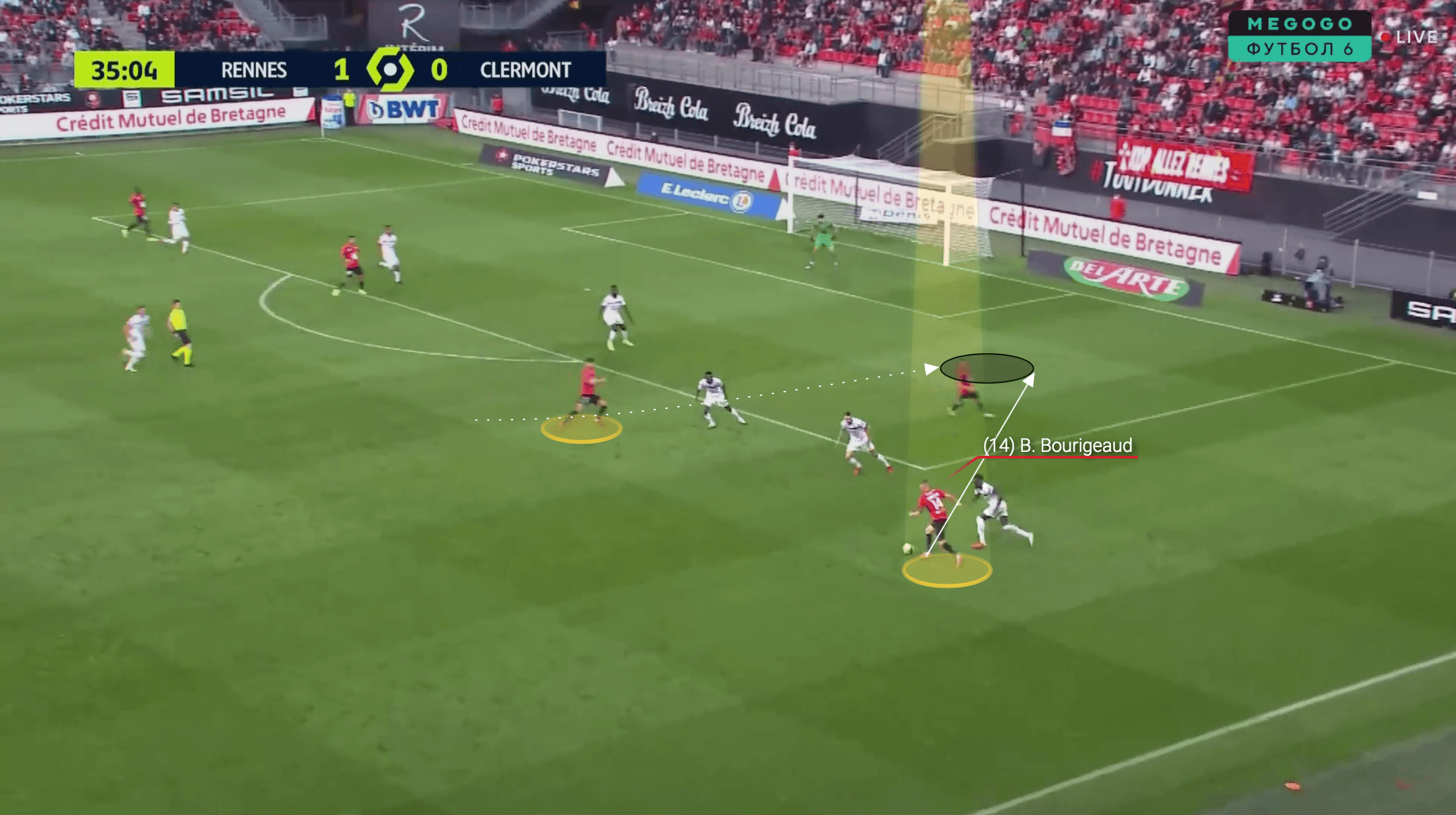 He doesn’t just pose a threat from out wide on the right side either and will vary his positioning by shifting inside and getting on the ball in the half-space or central channels.

Below we can see him instinctively shifting over into the central channel, evading tight marking in doing so and engaging in a quick wall pass combination with his teammate to release him into the space behind the Montpellier defence. 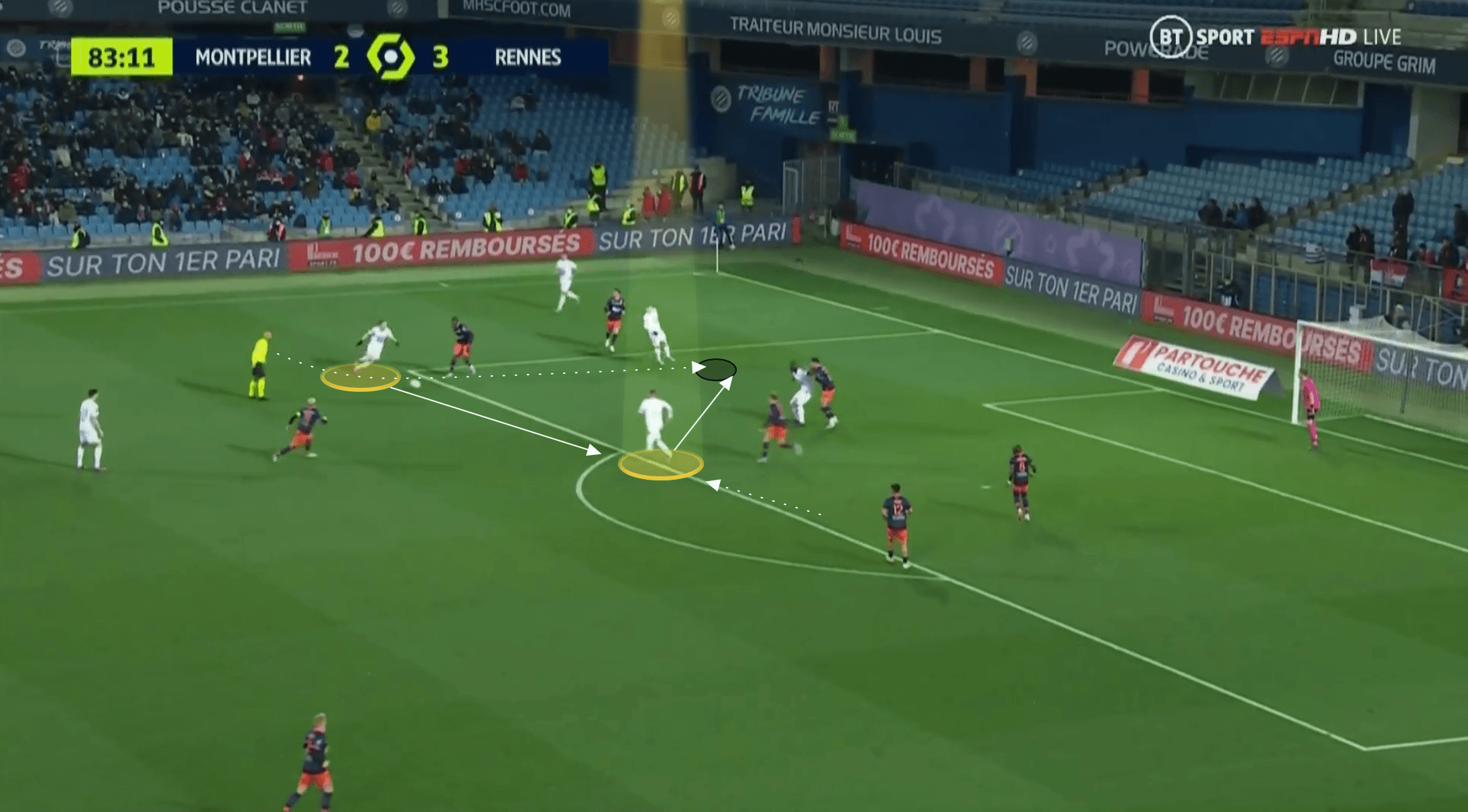 Bourigeaud averages a healthy number of crosses with a respectable completion too, making 3.76 crosses per 90 with a 32.3% completion rate on these.

He can cross from typical areas for a right-winger, and generally looks to whip the ball across goal at head height, however, he has gained particular success this season by engaging in a short corner routine before then playing the cross in. Again he can whip this ball towards goal and all that takes is a faint touch from a teammate to be directed into the net, however, he has quality vision and will vary this approach. Below we can see him lofting the ball well over the cluster of players for his teammate to latch onto at the back post. 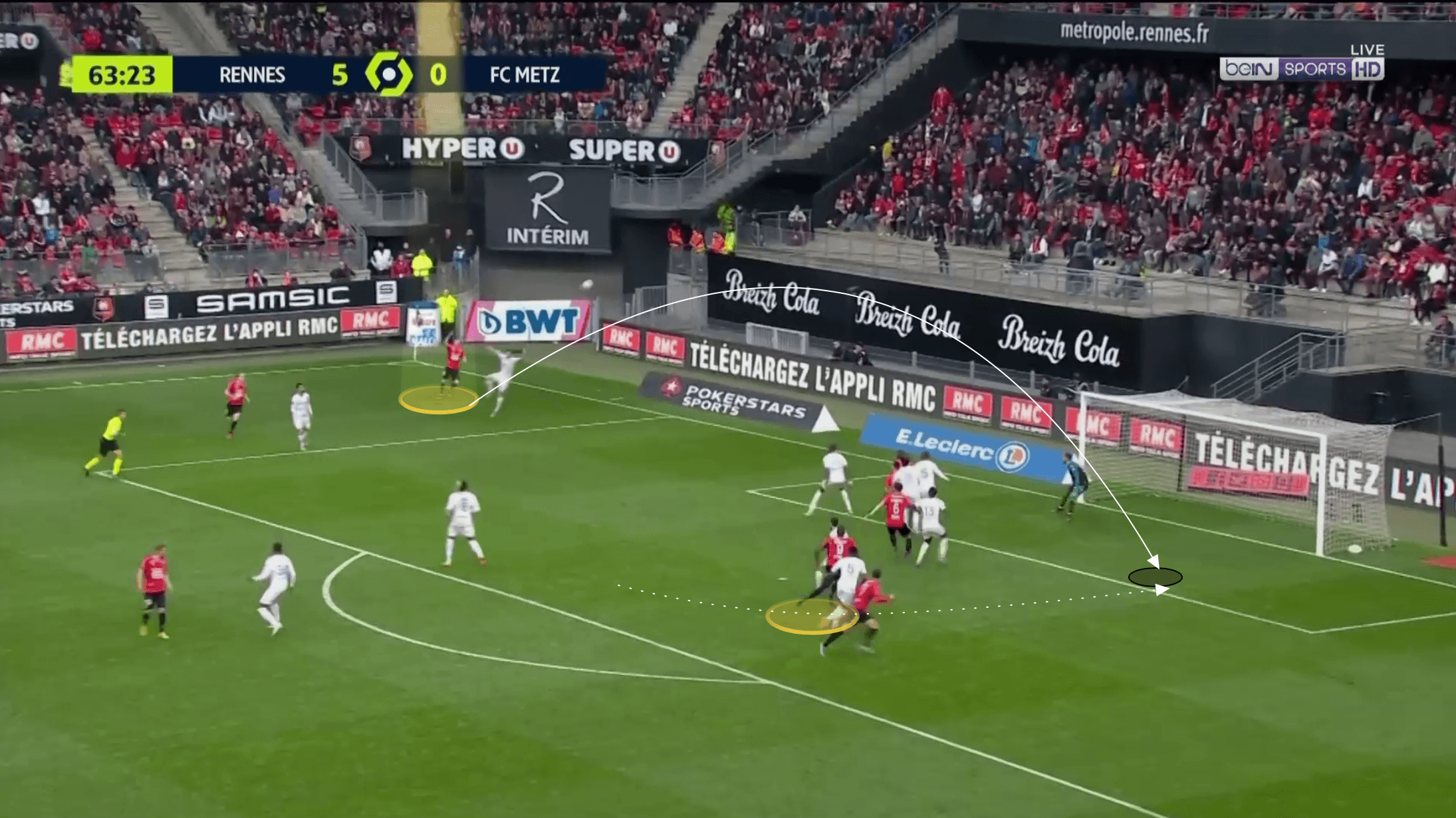 Bourigeaud is a highly active member of the team in the defensive phase, showing consistent intensity and commitment in order to win the ball or at the very least provide a presence. He uses his change of pace and all round game awareness to press effectively.

Below we can see him initially anticipating the back pass from Metz whilst initially positioned narrowly as part of the compact defensive unit. 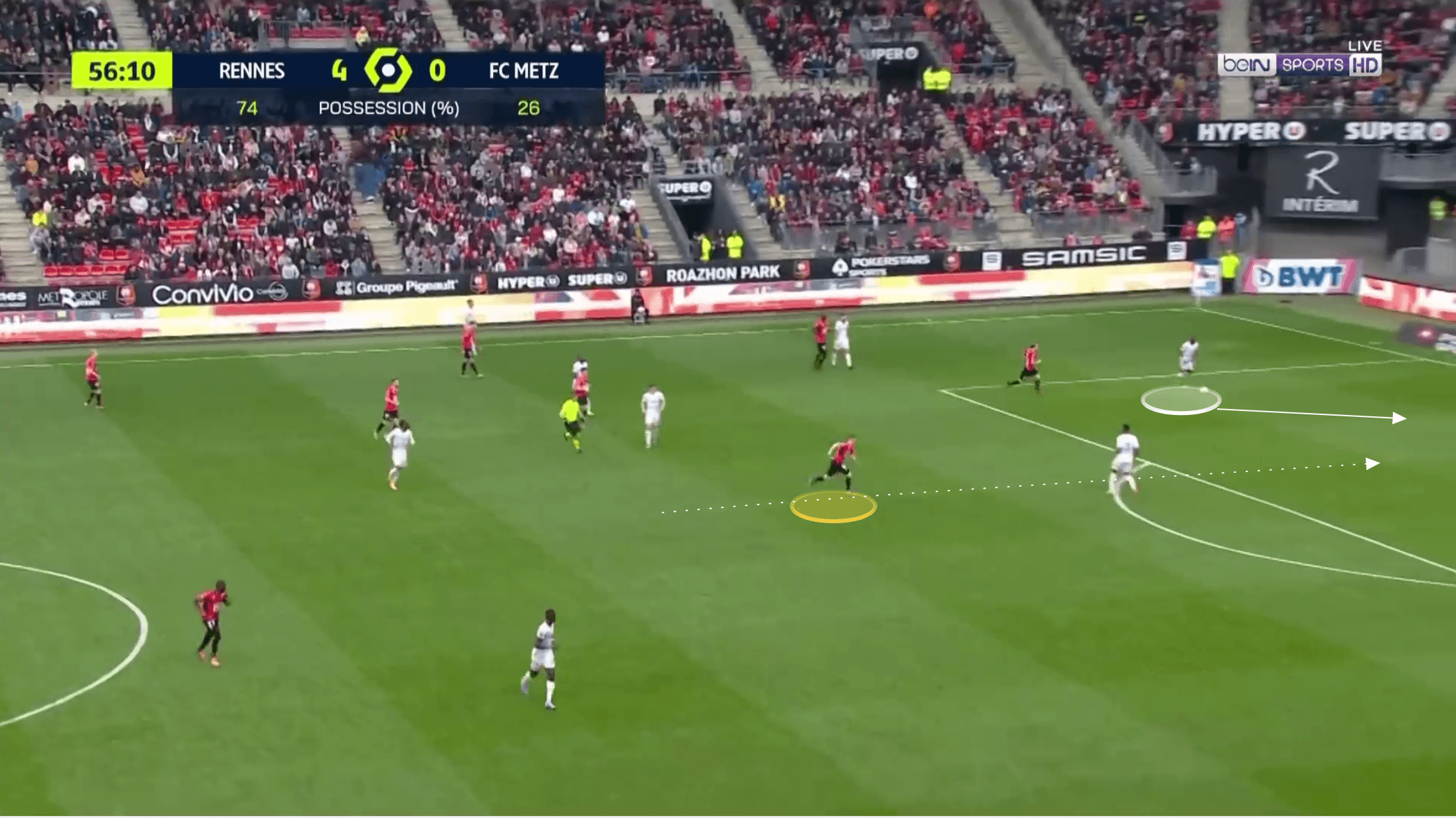 The next frame, a matter of seconds later, shows how quickly and effectively he pressed this pass, challenging the goalkeeper as they sought to play away from his pressure. 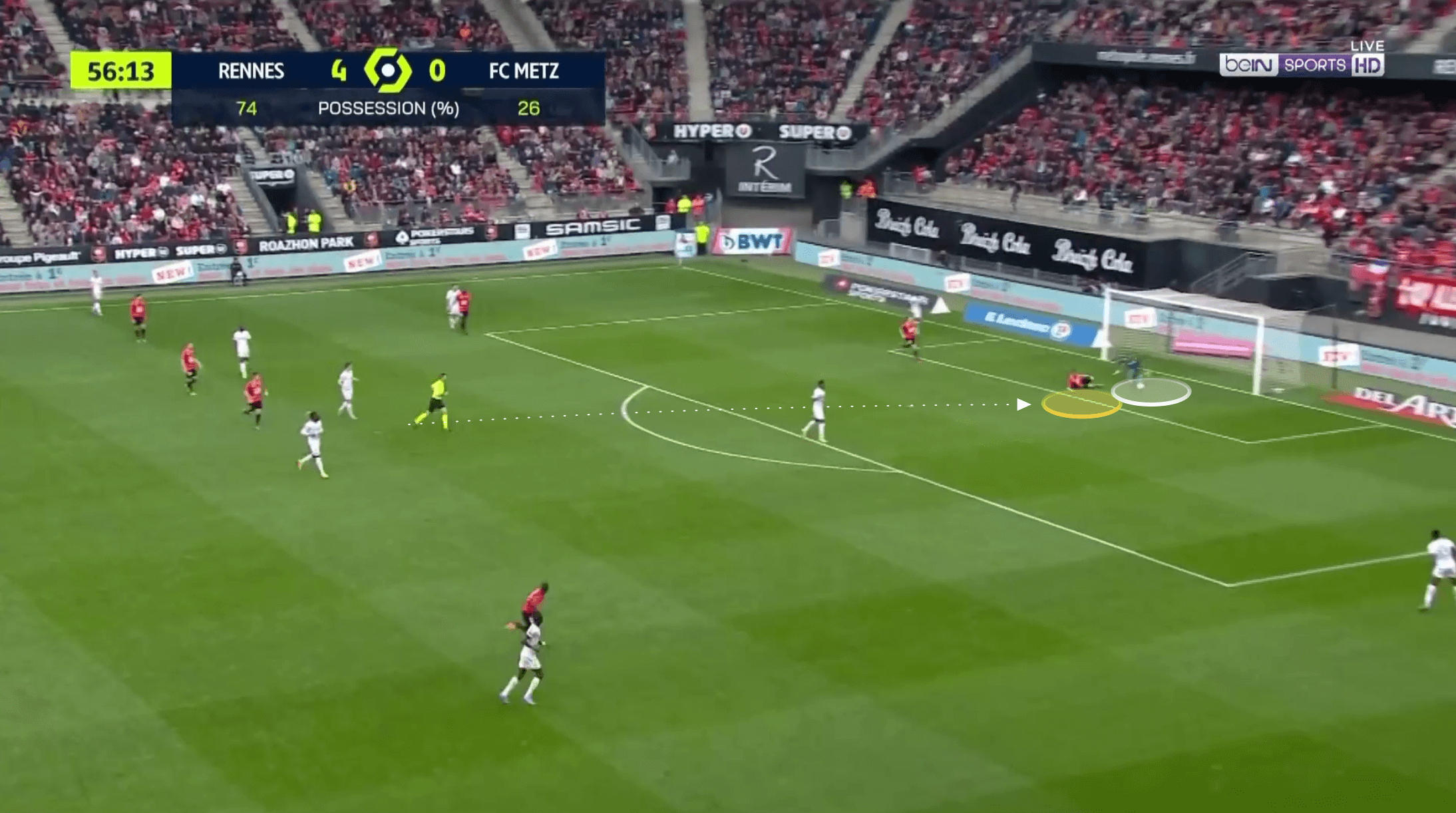 He can get pulled out of positions at times such is his desire to win the ball, and admittedly he can get drawn into areas that leave his flank initially vulnerable. However, he is persistent around the ball, will put his hands on players but generally legally, and as a result is a difficult player for opponents to shake off.

He is quick to recognise when an opponent will receive the ball facing his own goal and as a result he will press them tightly and prevent them from turning on the ball.

We can see him doing this in the next image as he follows the opponent into their own half, and whilst drawn out of position in doing so, the intensity with which he does this ensures the opponent doesn’t get time on the ball and isn’t able to exploit any space or even play forward. 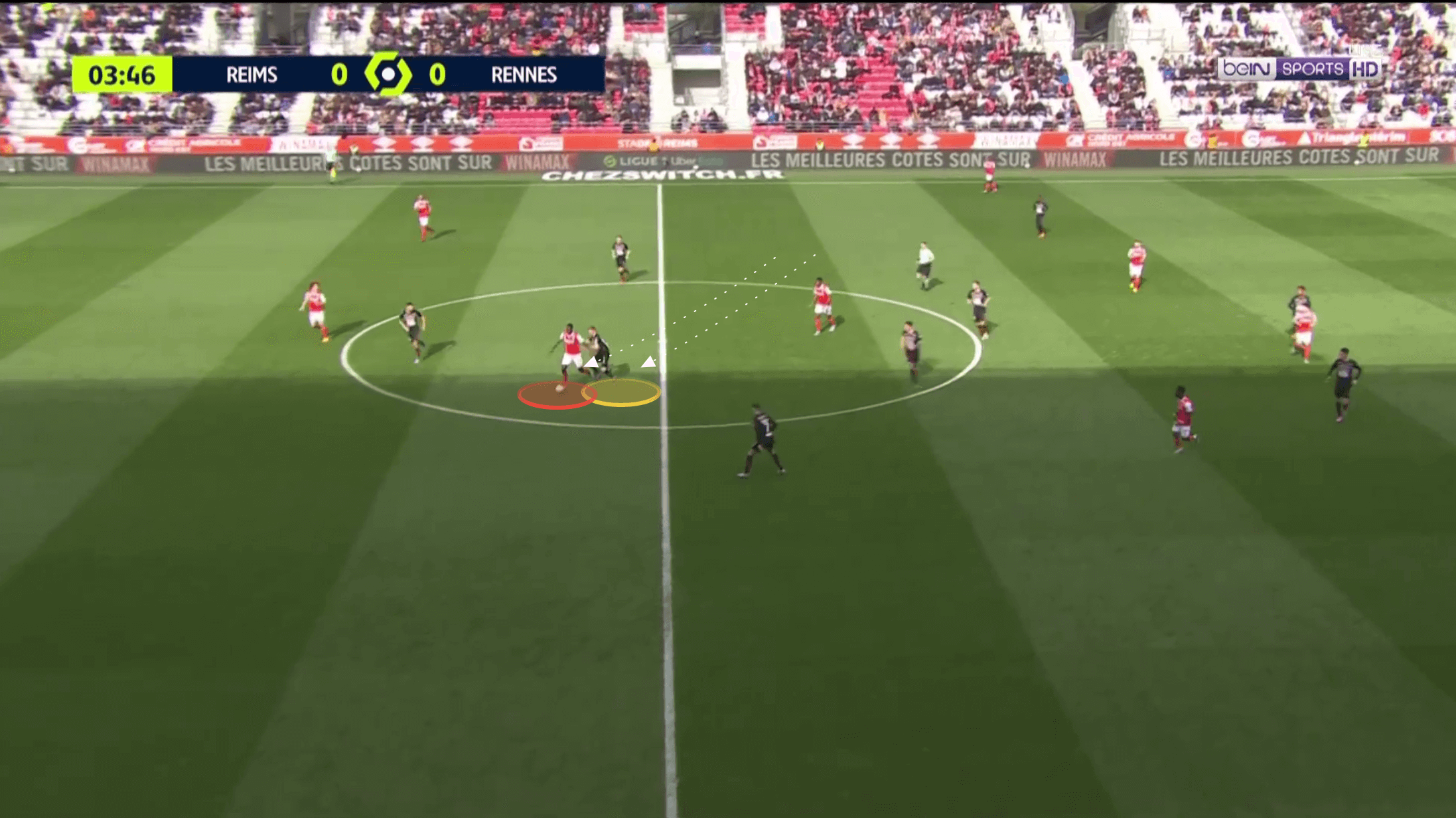 Bourigeaud scans out of possession and adjusts his positioning accordingly.

Below we can see him supporting his full-back initially in the defensive phase, watching the ball but quickly checking his shoulder to see the positioning of the attacker immediately behind him. 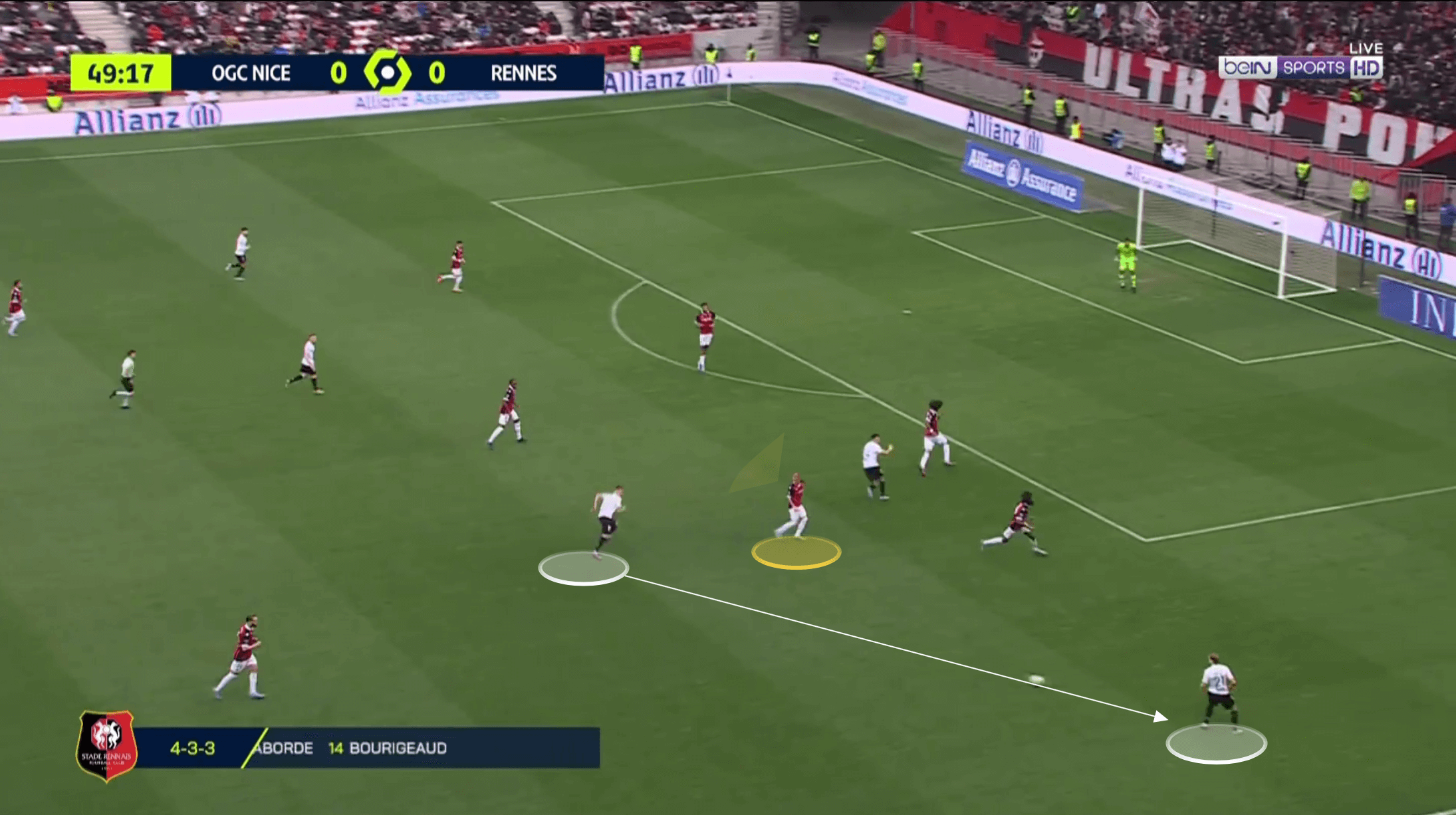 As a result of this scan, he was able to anticipate the run of this player in behind, moving with them and doing an excellent job of using his pace and combative approach to ensure he got in front of the runner and cut out the attack in doing so. 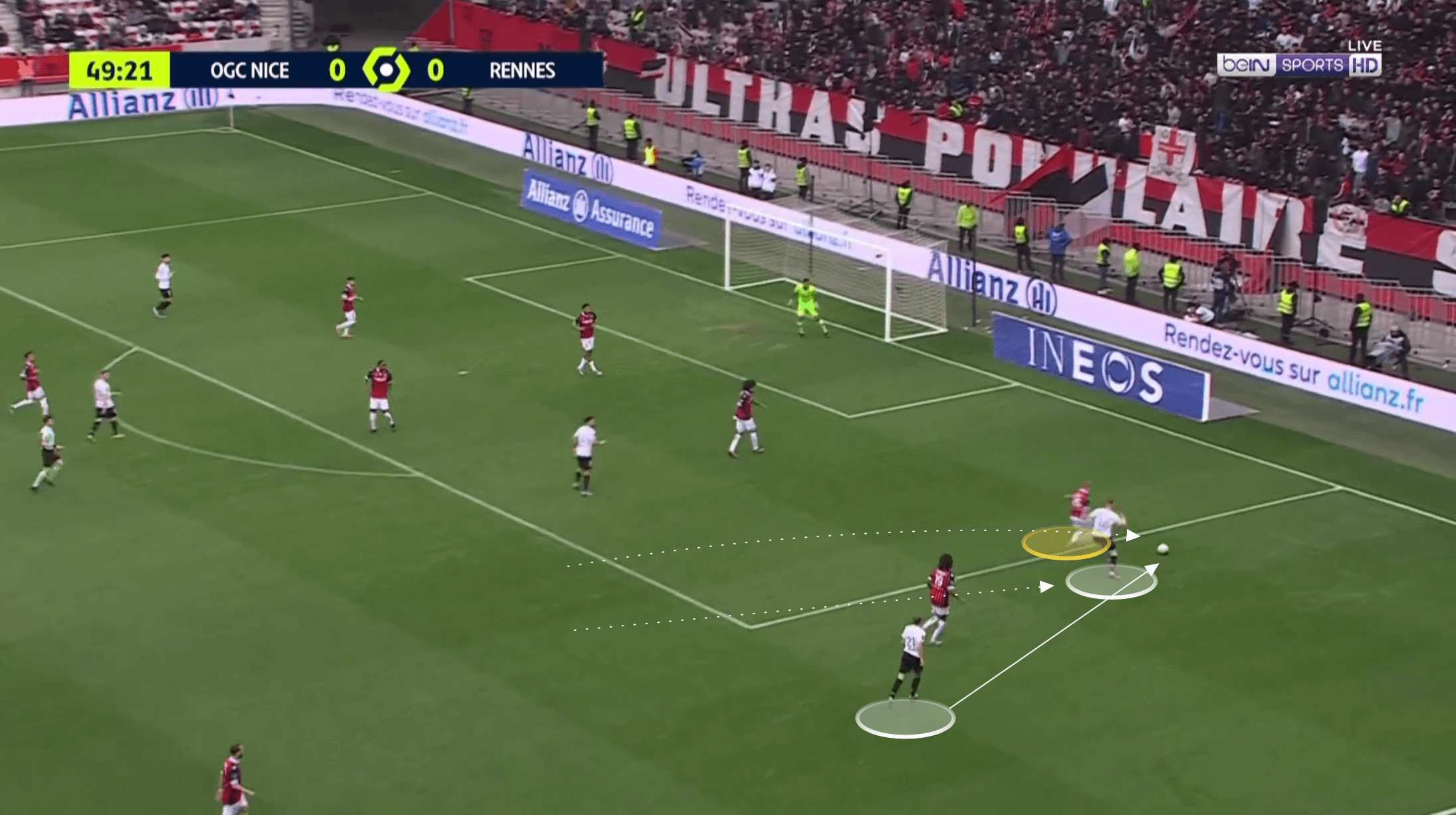 It remains to be seen whether Rennes can clinch a Champions League place this season, however, they have been consistently excellent this season so far and will fancy their chances as they approach the final games of this campaign. Bourigeaud will of course need to continue in the vein of form he has shown for much of this season if Rennes are to achieve this, but there has been no reason to suggest he won’t.

Bourigeaud has been with Rennes since 2017, joining from RC Lens for just €3.5 million. He is now valued at €15 million by the website Transfermarkt, which shows what phenomenal value he has been for Rennes. With him now in the peak years of his career, and given his outstanding production this season, he may have his head turned this summer, and Rennes would likely see a sizeable increase on the amount they initially spent on him almost five years ago.