In a team like Barcelona Femini, there is an abundance of quality. With players such as Lieke Martens, Caroline Hansen, and Alexis Putelles, there are a host of names that require the spotlight to be placed on them due to their incredible ability and performances.

A player that does not always get her share of that spotlight is Kheira Hamraoui. The French midfielder plays the sole holding role in Barcelona’s midfield and is responsible for keeping the side ticking throughout matches. In this tactical analysis scout report, we will take a look into Hamraoui in Barcelona’s side. We will discuss the role itself, and why her specific abilities make her so well suited for the Spanish league leaders and their tactics.

Role in Barcelona’s side

Hamraoui is Barcelona’s first choice in the number six role. Here, she sits as the deepest lying midfielder in a single pivot. I wrote a piece looking into the advantages and disadvantages of single and double pivots a couple of weeks back. In this, we took an in-depth look into these types of midfields and looked at Hamraoui specifically for a part of it. However, we will go into a general explanation of her role here as well before going into the key parts of her game.

The French midfielder sits in front of the two Barcelona centre-halves and acts as a shield. Below you can see her heat map from the 2019/20 campaign thus far. Here you can see her tendency to move closer to the right side of the pitch. She does this to act as protection for the super attacking Marta Torrejon at right-back. This positioning gives the full-back the freedom to get forward and combine with teammates, and this has resulted in her recording two goals and four assists in the league.

Hamraoui averages 70.96 passes per 90, with 87.2% accuracy. This number only trails Mapi at centre-half and Alexia Putellas at central midfield for most passes in the side this season, emphasising her major impact on the side from a deep position. Of these passes, she also makes over two passes forward for every one she makes backwards. This shows her want to move possession forward whenever possible, rather than having to recycle it back. She also boasts an 81.5% completion rate on these forward passes, proving that when she looks to move forward she is usually successful in doing so. The pass map above is Hamraoui’s from Barcelona’s 5-0 victory over Madrid CF. Here you can see her focus on forward passes, as she completed 19 out of 21 attempts. She controlled the entirety of the match, completing 86 out of 97 passes she attempted, and recorded an assist as well as a second assist.

When Barcelona are in possession and looking to break down opponents, they will normally be facing a deep block. Because of this, the Catalonian side must be very calculated about how they move the ball in order to pull out the block to create opportunities to score. This analysis will look at why Hamraoui is important to this.

Barcelona base their attacking structure on creating overloads against the opponent. From here, they try and use their superior ability to take advantages of said situations. If this is not possible, Hamraoui’s ability comes into play. Her ability to see the full field all the time allows Barcelona to threaten anywhere on the pitch at any time. If these overloads do not result in a breakthrough, Hamraoui will position herself to show for possession in a deeper position. When the ball is passed back into her she will immediately look to switch it across the pitch. Here, due to the overload forcing the opponent’s block to shift to that strong side, Barcelona’s winger and full-back on the opposite side are normally left in a 2v2 scenario. Here they have the space to run at the defenders while the rest of the defence struggles to get back into shape. 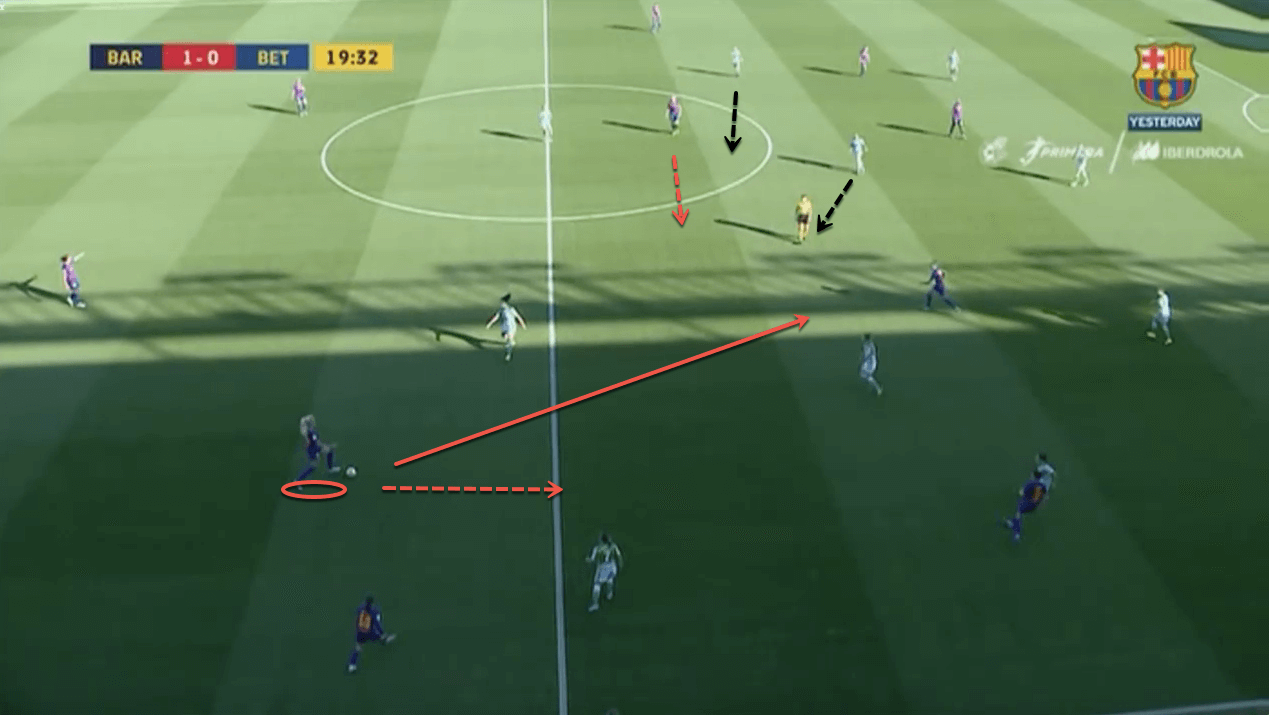 In the image above we can see Hamraoui occupying a pocket of space near the right-back position. With her ability to see the entire pitch, she has already identified the opportunity for a chance for her teammates on the left side of the pitch to attack in space. She makes a pass into the centre of the pitch initially. Once this pass is made, the opponent’s midfield tries to close in to restrict any forward options for the player in possession. 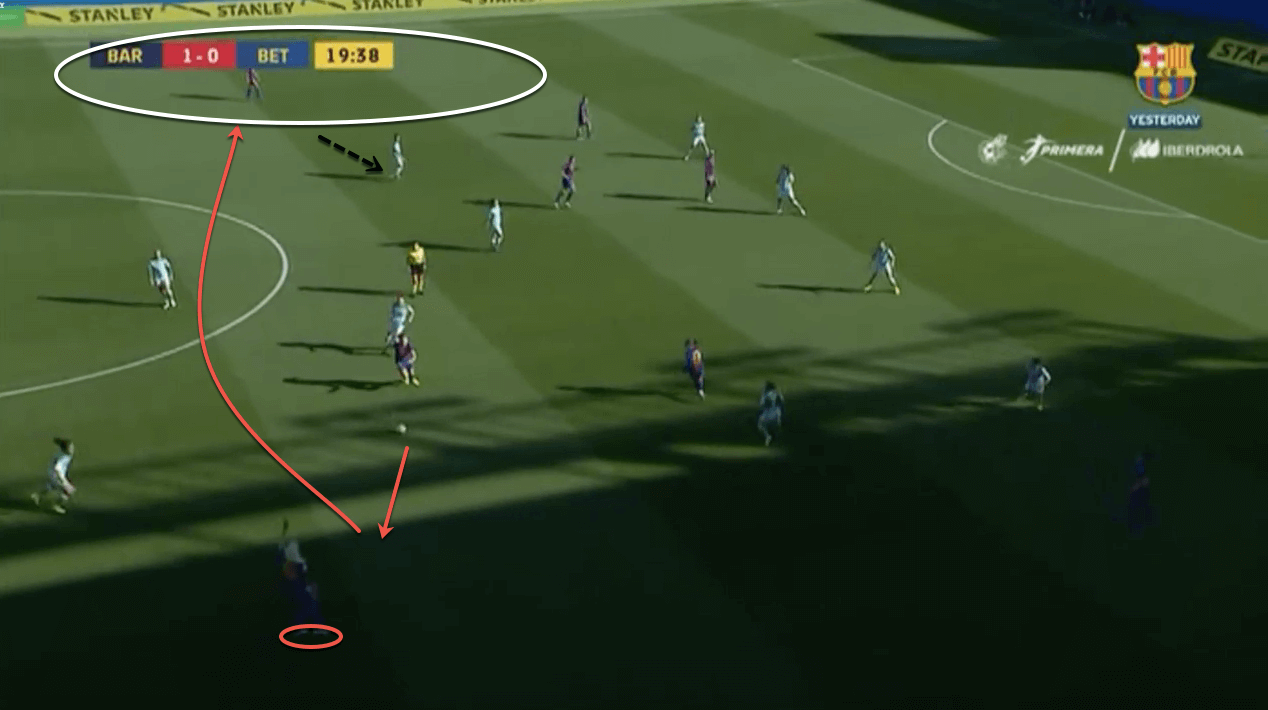 However, Hamraoui has immediately shifted forward to show for a return pass, and once it is played she puts her arm up to signal to the left-back that the switch is coming. She hits it first time and Barcelona are able to attack with speed on this side of the pitch. As you can see in this image above, the wide midfield of the opposition has come central because of the initial passing move and was not looking out for the switch of play.

Hamraoui’s intelligence also aids her in drawing out a press and allowing her teammates for room to attack. In the image we can see below, Barcelona have possession on the left side of the pitch. The French midfielder acknowledges possession moving backwards to look for another lane to attack, and she positions herself in the middle of the opposition’s midfield set-up. As soon as the pass is made to her, the press comes in from her blindside to try and dispossess her while Barcelona have numbers forward. 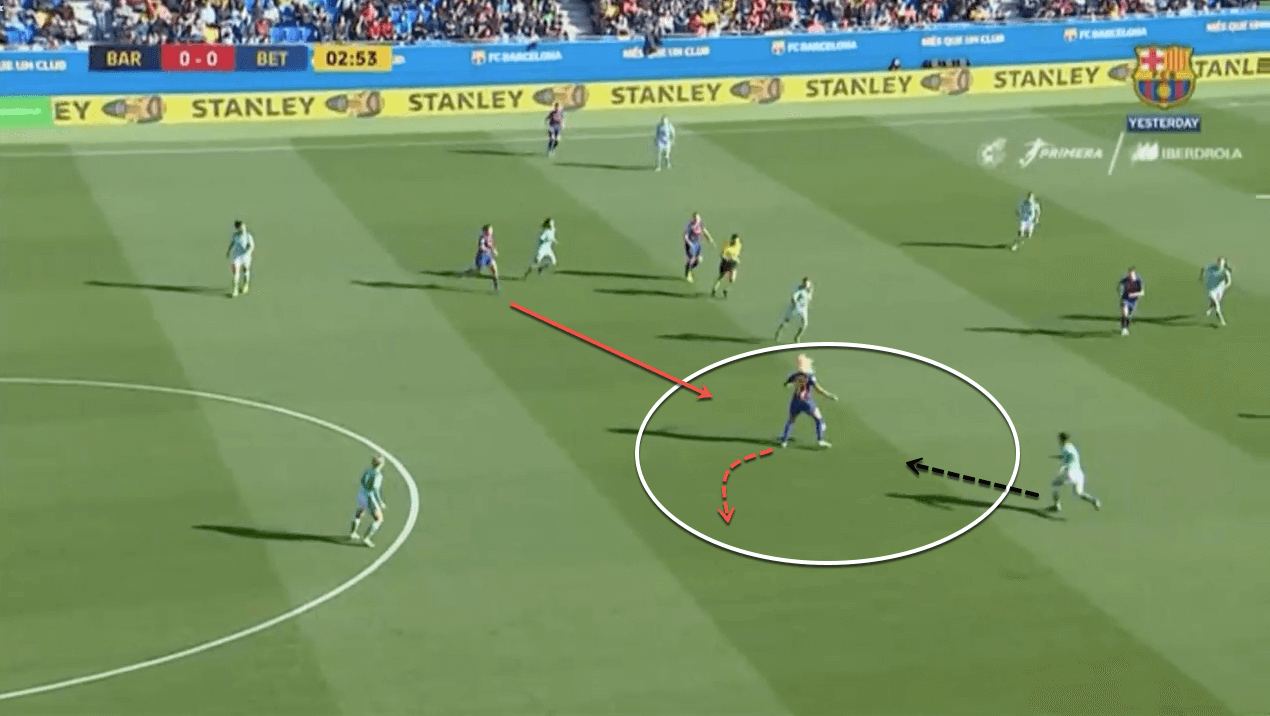 She anticipates the press brilliantly, and her first touch spins her around the opponent and into the direction of the right side of the pitch. She passes out to Torrejon at right-back and now the full-back is able to press forward. Now one of the midfielders has stepped out of position and there is space to be exploited by Barcelona by attacking quickly. 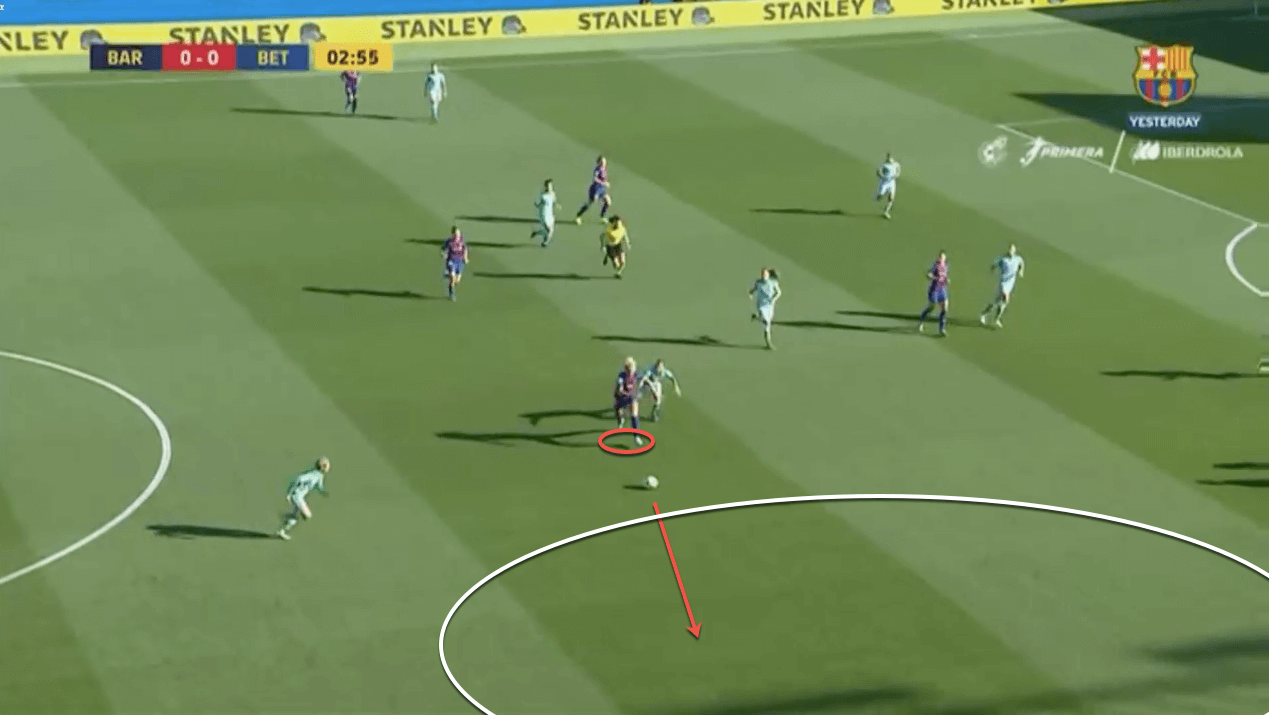 This part of the game is arguably the most important for Hamraoui and her role in the side. With Barcelona’s attacking nature, it is essential that they are able to effectively set up their counter-pressing tactics. The French midfielder is essential in this phase. As the single pivot, she has a huge amount of responsibility to stop or slow down counter-attacks to allow her teammates to return into their defensive shape.

So far this season, Hamraoui is averaging 4.99 interceptions per 90 minutes, highlighting her intelligence to read play and cut out danger before it can truly threaten her side. Along with this, she averages 10.43 recoveries per 90, which is a very respectable number in a side like Barcelona who dominate possession. 55.4% of these recoveries also come in the opposition’s half, which allow the Catalonian side to get right back on the front foot when she regains possession. 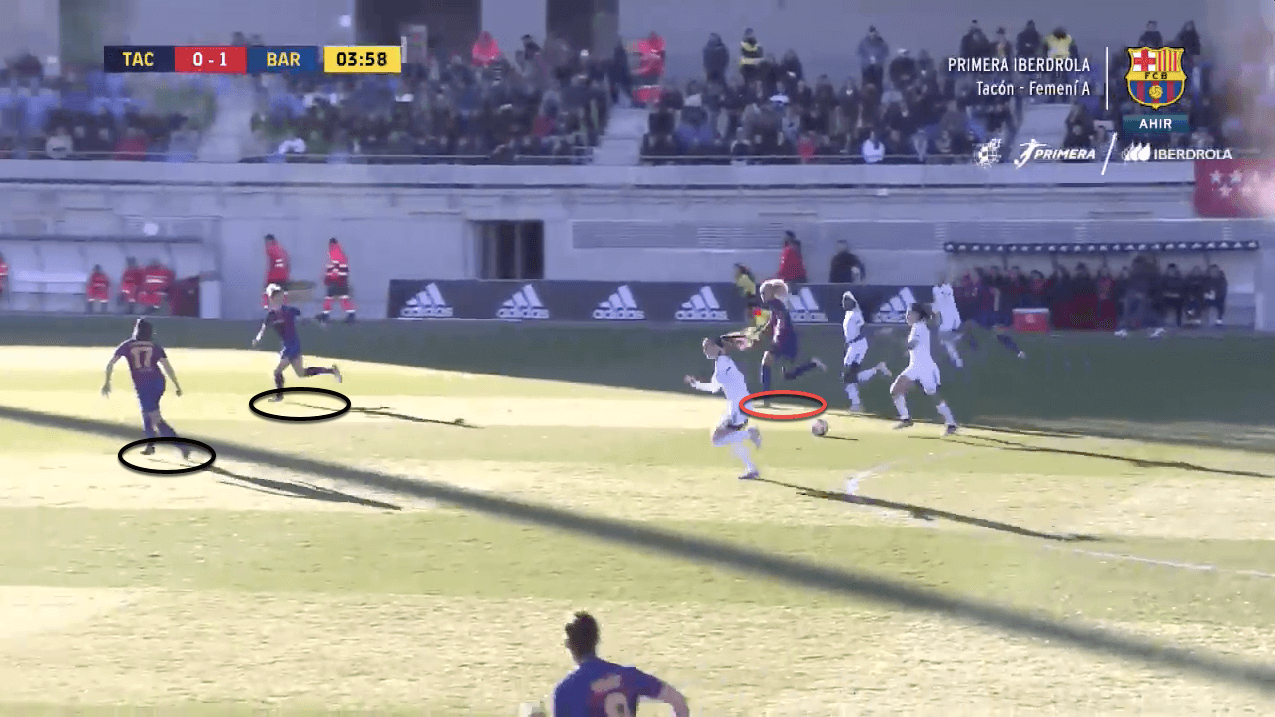 In the image above, we can see Barcelona lose possession near the midway line of the pitch. You can see the full-backs are caught out in high positions, leaving only the centre-halves back and Hamrauoi in front of them against the opponent’s attacking players. The player in possession drives into the middle of the pitch and her teammates spread out around her to try and take advantage of the space in behind the full-backs. 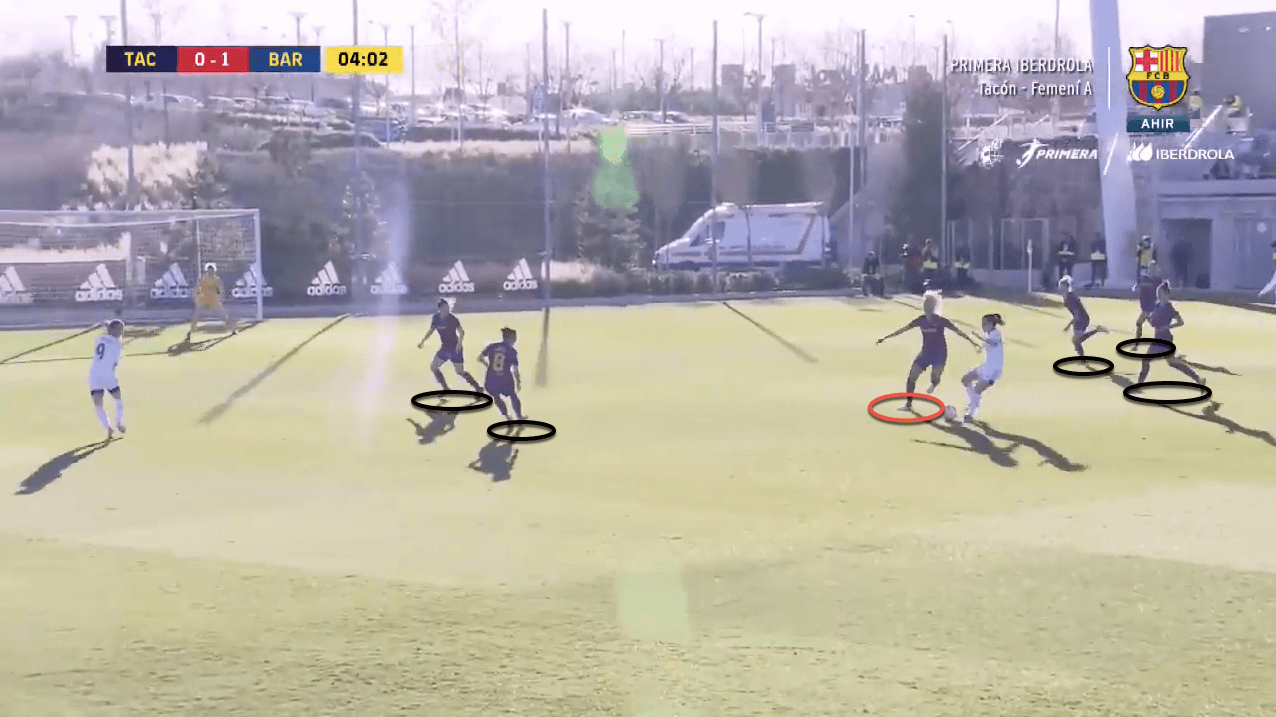 Hamraoui reacts quickly and moves to get in front of the player in possession. She understands the situation well and does not try and dive in to win the ball. Rather, she follows the player and takes away her forward options. Eventually, the player in possession is forced to turn back as you can see above, and by now Hamraoui has allowed her teammates to get back, and now Barcelona have five players back to defend against the attack instead of just the two centre-halves.

She is also brilliant in manipulating where possession moves while Barcelona are in their defensive transition. She works to force play into space where her side are not under threat. In the image you can see below, possession has been lost in the final third, Hamraoui identifies the player in the centre of the pitch looking to receive a pass behind Barcelona’s midfield. She quickly moves to block off this passing lane, and the player in possession is then forced to play it out wide. 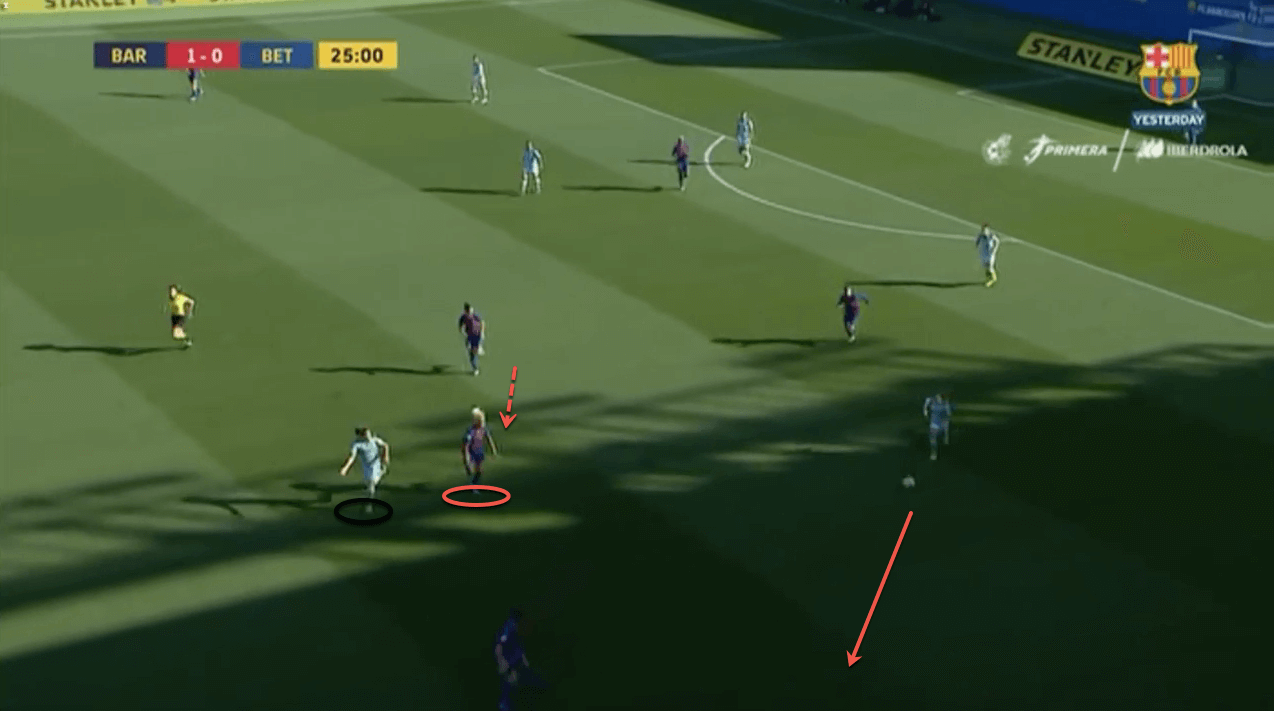 The player Hamraoui initially blocked off moves wide to present a forward option for the player now in possession and receives a pass against the touchline. She is marked by Torrejon as she moves forward against the Barcelona defence. Hamraoui stays diligent and tracks back to her own box. The attacker makes a move to the inside and gets around the Barcelona defender. However, the French midfielders positioning and awareness of the situation put her in the perfect position to come in with a sliding tackle to clear the danger before the attack can get into the Barcelona penalty area. 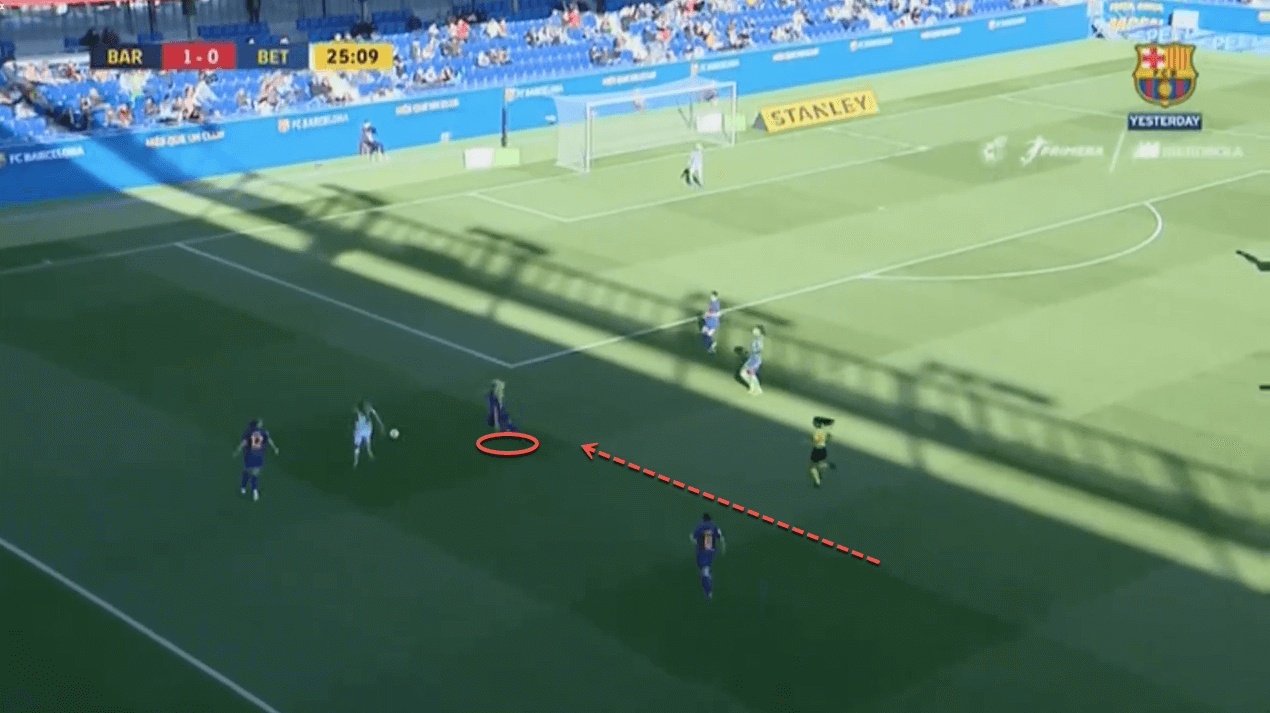 While a lot of her role involves defensive duties, Hamraoui is also adept in moving forward up the pitch. Like we discussed above, she is able to use her intelligence in identifying space in the attacking phase of the match as well herself. Hamraoui averages 4.08 shot attempts per 90 minutes, and 1.59 touches in the box per 90. She offers a threat from deep positions and is a massive threat to opponents due to them having to worry about so many other talented attacking players in the Barcelona squad. 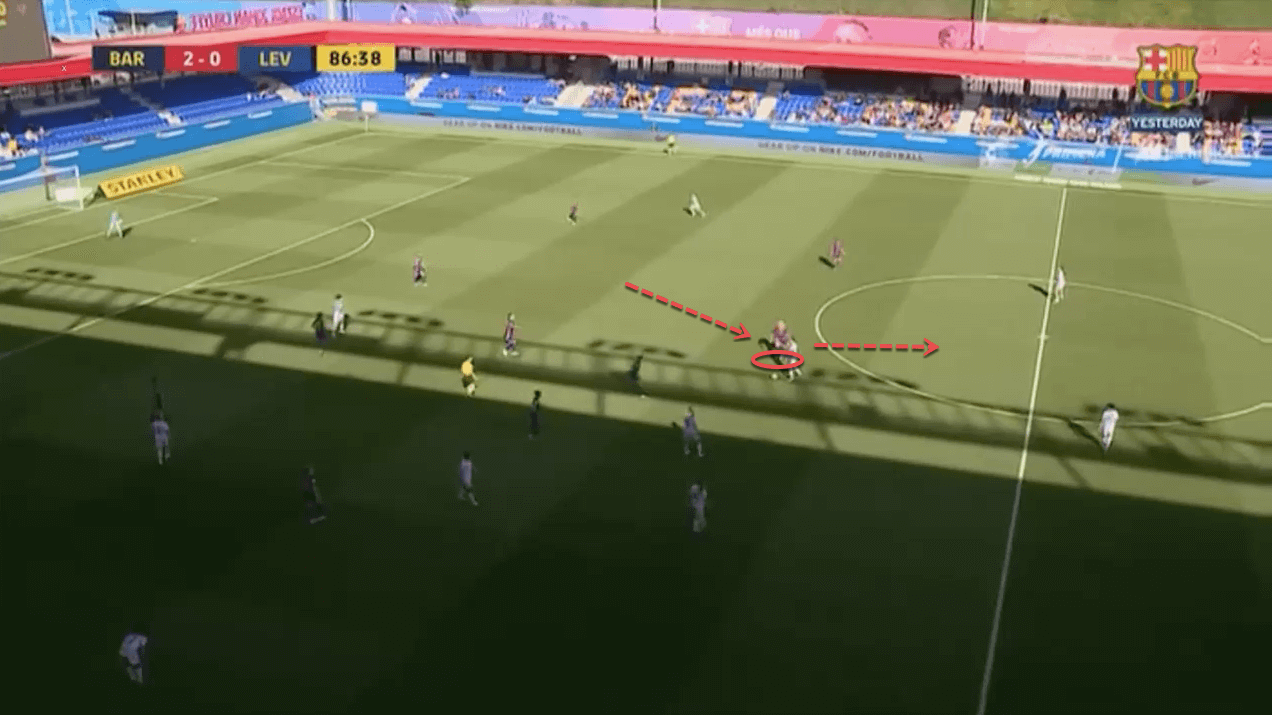 In the image above, the opposition has moved possession into the middle of the pitch. Hamraoui steps forward into an advanced position to restrict the forward options the player has. An attempted pass is intercepted by another Barcelona player. Realising the opportunity break forward, Hamraoui burst forward. 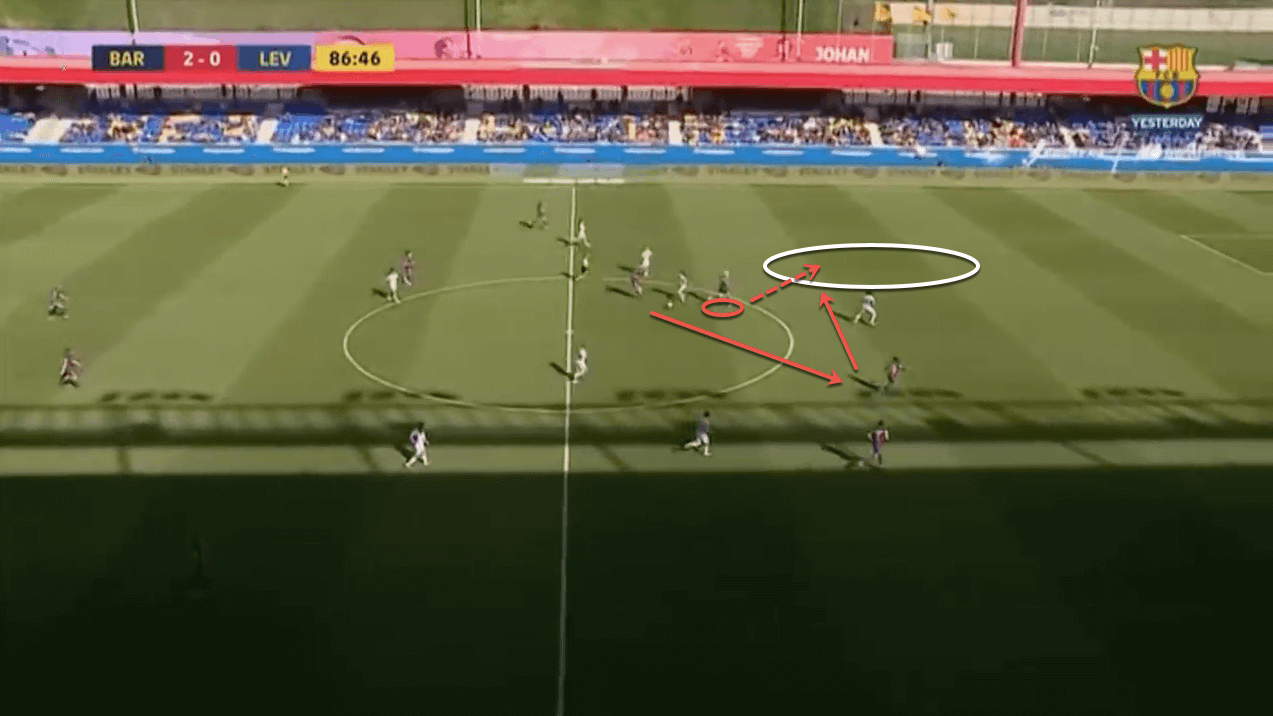 Her forward run forced the opponent’s defence backwards, giving the player in possession space to move forward themselves. The initial pass is played to the right and Hamraoui slips in behind the defender and positions herself for the square ball from her teammate. This example perfectly shows her awareness of space and her ability to time her runs both to her benefit and her teammates.

Although Hamraoui is very intelligent when moving forward up the pitch, this can also be her weakness to the side. She is able to get into good positions as we saw in the example in the section above. However, her end product is lacking at times. While Barcelona scored on the attack above, once Hamraoui was put through on goal, she hit a very tame effort right to the side of the goalkeeper. It was a rather simple save, and should probably not have been pushed out into such a dangerous position as it was for the rebound to be put in. Below you can see the spot from where Hamraoui took the shot from the counter-attack we looked at above. 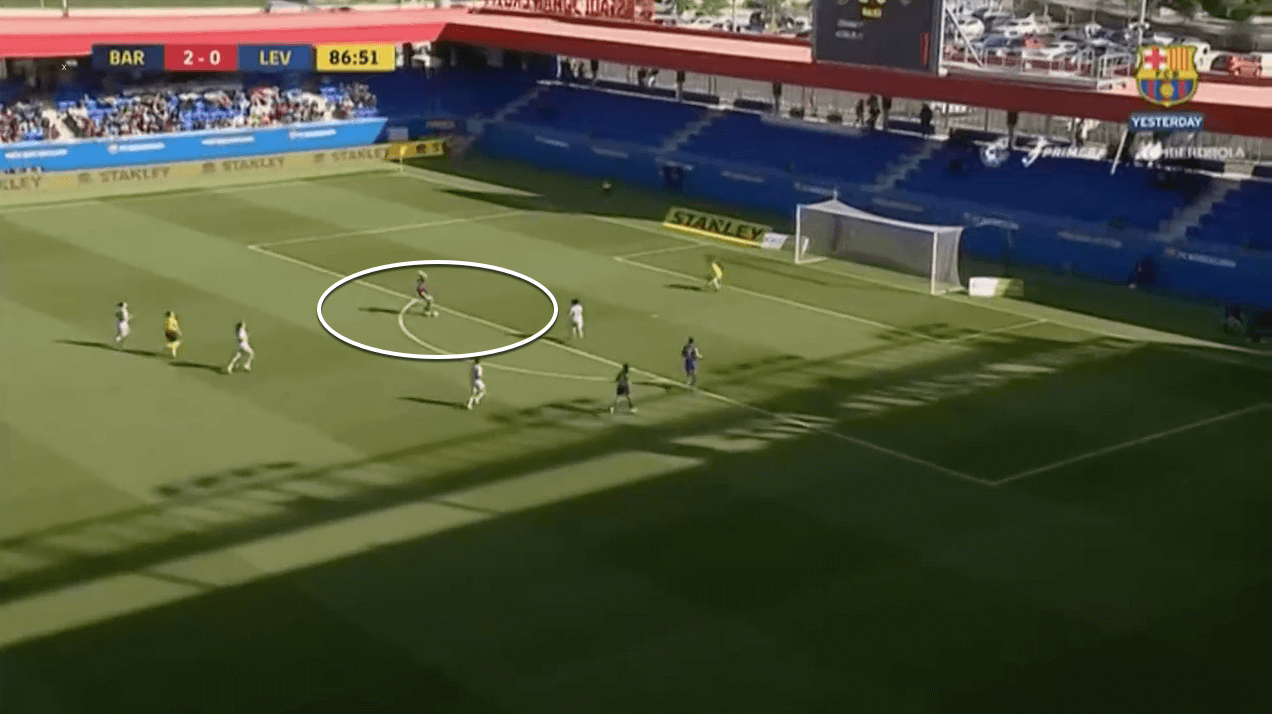 Looking at the statistics, this weakness is evident. She has an expected Goals (xG) of 0.34 throughout this league campaign. However, she is only averaging 0.23 goals per 90. This highlights her struggle to finish off chances that have come her way this season. As well, while she is averaging 4.08 shots per 90, only 41.7% of these are going on target. If she could increase this percentage, it is likely we would see her goal average increase as well.

While there is room for improvement on the attacking end of Hamraoui’s game, her importance to the side is not lessened in the slightest. In this tactical analysis scout report, we have looked at why her abilities make her a fantastic fit for the single pivot role Barcelona use in their midfield.

Her performances this campaign have been top drawer, and it is likely she will be knocking on the door for a spot in France’s national side in years to come.