Entering the round of 16 of the Europa League, Istanbul Basaksehir’s managed to secure a 1-0 victory against København. For a very new side in the continental competitions, it was impressive that this Turkish team qualified as the 1st in the group with Serie A team, Roma and a Bundesliga team, Borussia Mönchengladbach.

This is our second piece on the performance of Başakşehir in the Europa League in season. In the previous analysis, we briefly analyzed the offensive transition of Okan Buruk’s team. In this tactical analysis, we will explain their defensive style of play and issues. In the coming weeks, we are also providing you with an analysis of Başakşehir‘s offensive style of play, as well as the philosophy of Buruk.

Given the ageing squad, it was not feasible for Buruk to deploy an intensive man-marking pressing scheme in the team. Currently, the average age of Başakşehir players was 29.8, as they possessed famous Premier League stars such as Gaël Clichy, Martin Škrtel and Demba Ba. On most occasion, Buruk’s troop was setting up a midblock to defend. On average, their PPDA in the Europa League was 12.21, ranged from 6.71 to 23.69. Against stronger opponents such as Roma and Mönchengladbach, they sit in a deep block more often as the intensity of press could match the rhythm. The figures were 18.48 & 13.18, 23.69 & 13.33 respectively.

The defensive shape of the team was usually 4-4-2, though sometimes it became a 4-4-1-1 as we saw in the Sporting Lisbon game. Or, it could be a 4-1-4-1 when the players rotated their positions. The core idea was to protect the centre. Therefore, in the hopes of avoiding the four-man midfield being stretched, their far side winger positioned themselves at the half-spaces. The shape was reflected in the following image. The positions were not fixed, when the ball side winger stepped out to the first line of defence, the three midfielders spread to form a 4-4-2.

However, the work rate of the strikers was not guaranteed, as both Ba and Enzo Crivelli were unlikely to commit themselves hugely in the defensive phases. 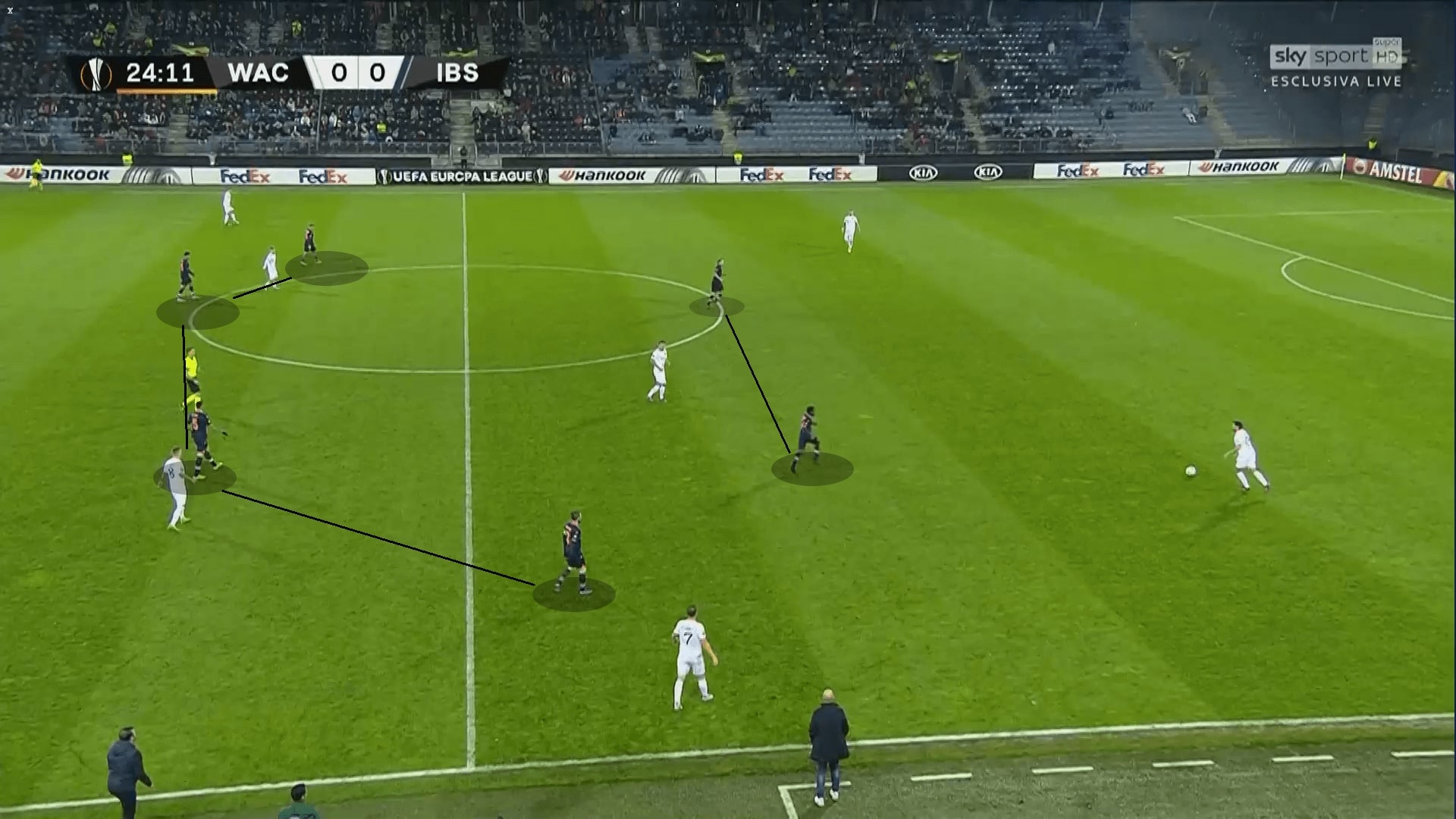 However, the 4-4-2 shape was not fixed. On some occasions, you will discover that the shape of Başakşehir became a back three, potentially a 3-2-4-1. This was because of a full-back joint the sole pivot, forming a defensive line in front of the defenders. This happened as the block might not be compact often, as you can see below, horizontally, the block was loose. Clichy had to step forward to prevent the Roma players from overloading Okechukwu Azubuike in the central third.

This setup matched the core idea as we mentioned. Moving a full-back to the midfield line might leave the wide areas opened, but spaces at the centre are covered. 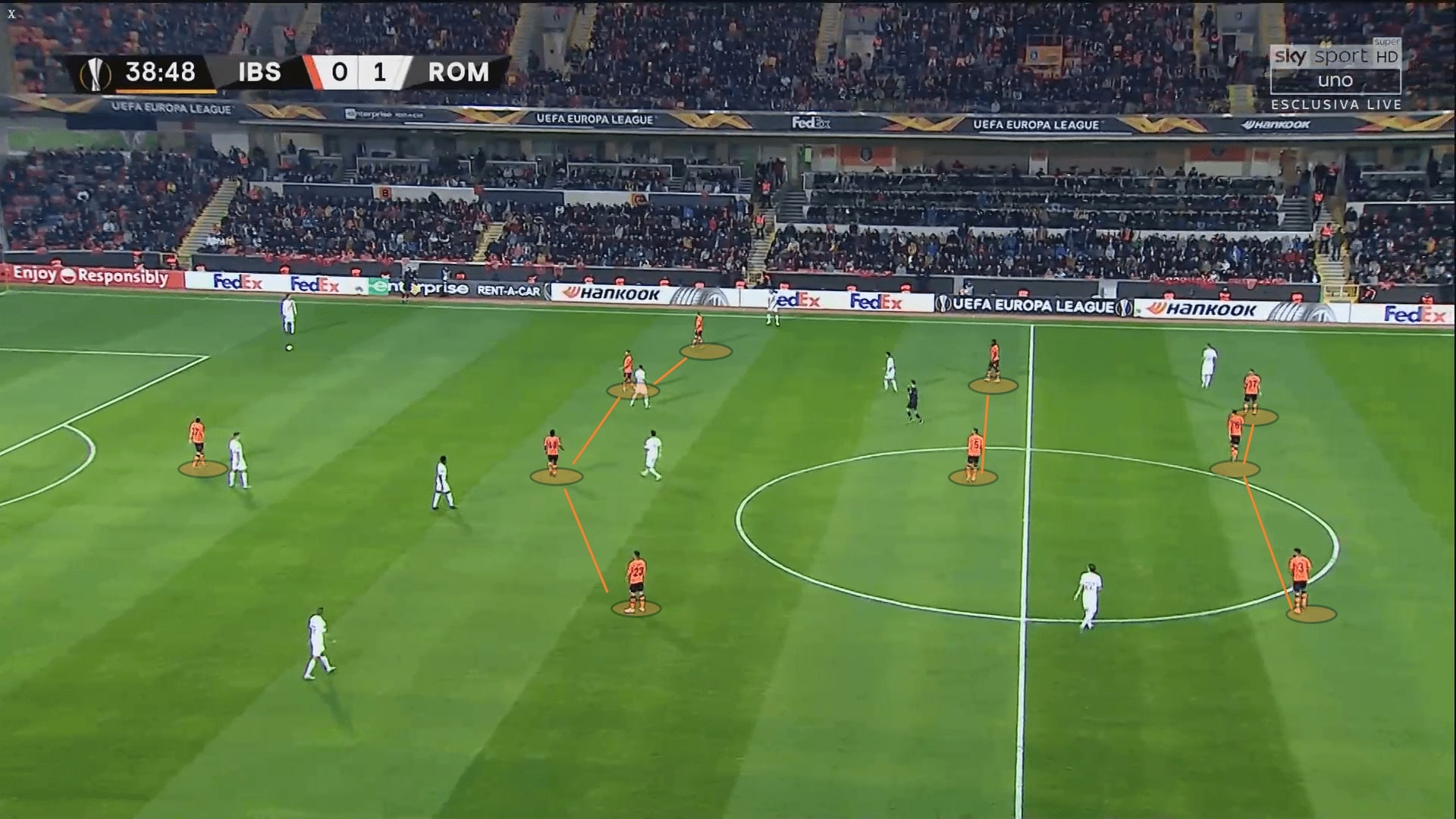 If the Başakşehir front players were pressing, it was important for the full-backs to position themselves slightly higher, as the sole pivot might joint the press as well. Therefore, they need another player to cover the midfield.

For example, you could see the majority of Başakşehir players were pressing upfront, shutting down the ball side. Mahmut Tekdemir also left his position to join the press. According to the opposition front three’s positions, Clichy had to step up slightly to control the oppositions. 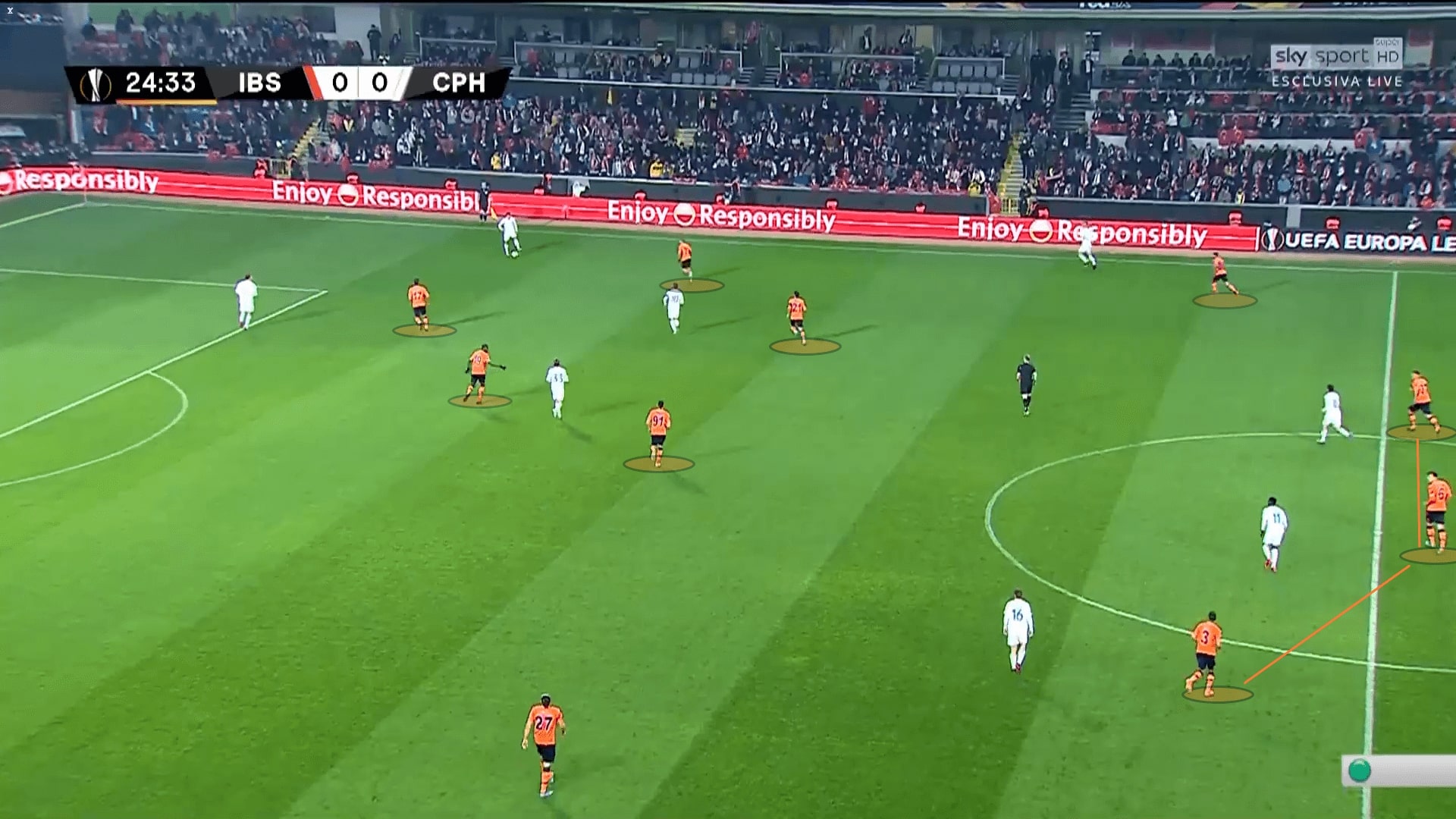 For example, you could see both Başakşehir midfielders closed the ball side, but leaving a white shirt at the half-spaces. Usually, it fell to the defensive midfielder to win the ball from the receiver’s back. This was what Azubuike did in the below image. He came from a far position, but he’s quick to pressure the target and win the ball. 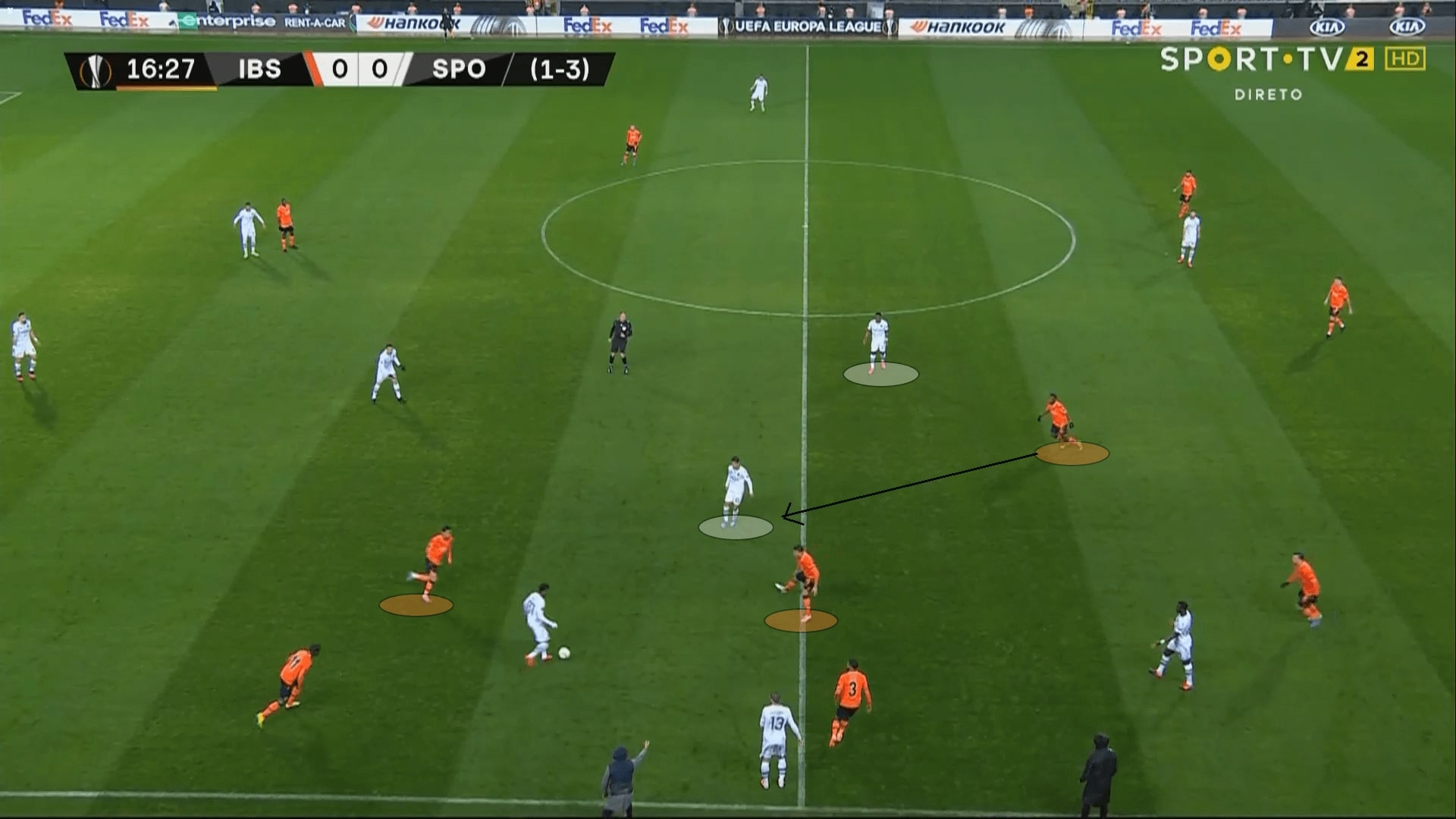 In general, the block of Başakşehir lacked compactness when defending. Therefore, the oppositions had plenty of rooms to exploit between the lines. One of the reasons could be the limited defensive efforts of the strikers. As a result, the midfielders had to push forward to press or defend, leaving gaps behind them.

Taking the below scene as an example. Başakşehir lost their defensive shape because of several issues. Initially, the two front players let the Roma goalkeeper, Pau López to progress the ball too easily. This triggered one of the Başakşehir midfielders, İrfan Can Kahveci stepping up to engage the receiver. Then, the pass was made between Kahevci and Azubuike as the lone defensive actions of the orange shirts. When Paulo Fonseca’s men bypassed Başakşehir’s midfield, they had a 4 v 4 numerical equality against the defenders. 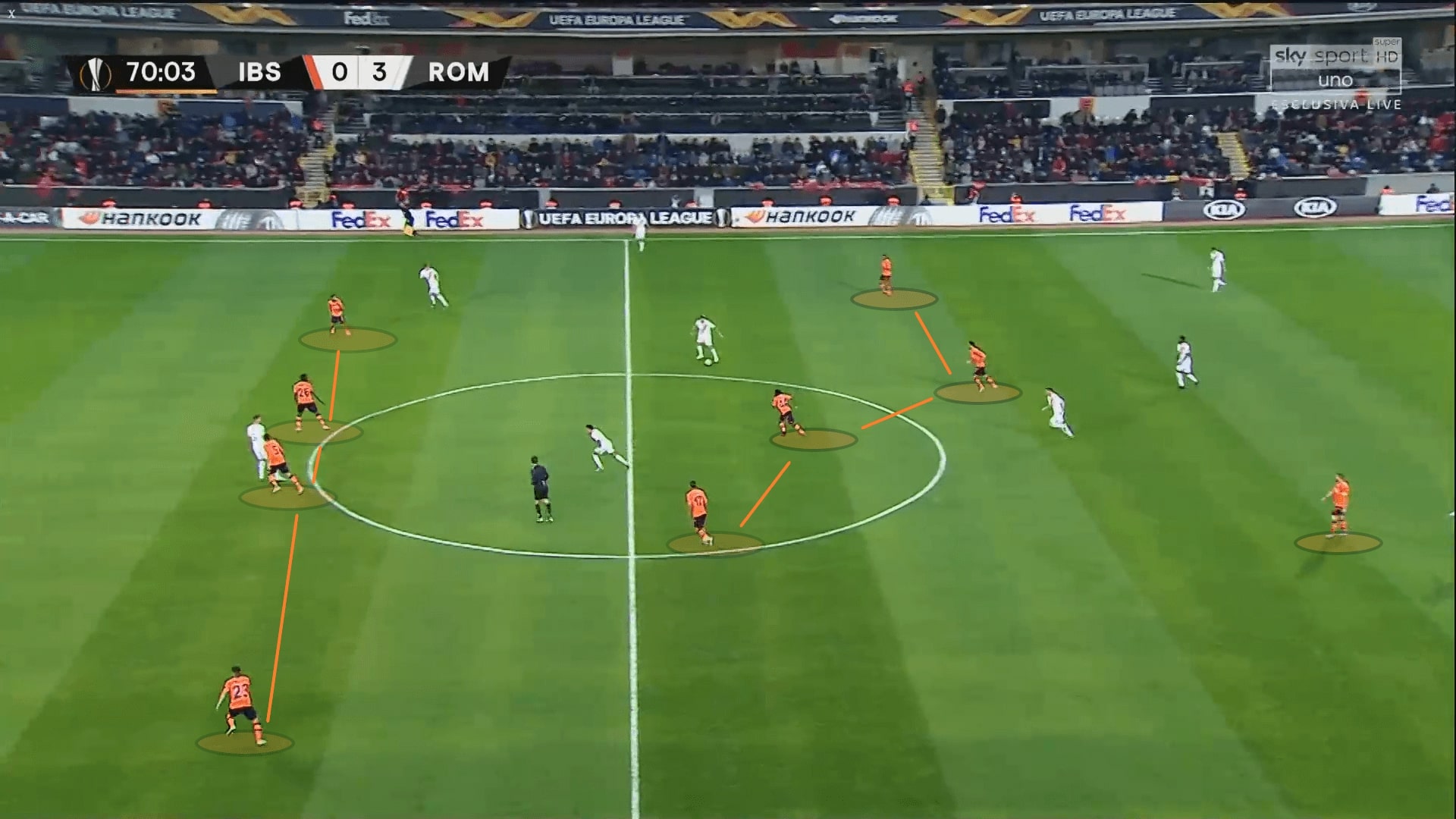 When Başakşehir tried to press, they committed almost every front player to the ball side. Therefore, when the opposition switched plays at the backline to the weak side, the opposition full-backs could easily access the Başakşehir’s half or even their defensive third easily. This situation was more common when the full-back was pinned by a winger, and, he could not step up to engage the wide player early.

This was the situation of the following image. Wolfsberger switched the ball to the left flank, and, Edin Višća was out of position as he joined the press early on. Also, Júnior Caiçara was pinned and he could not leave his position, Başakşehir could not prevent Wolfsberger from accessing their defensive third. 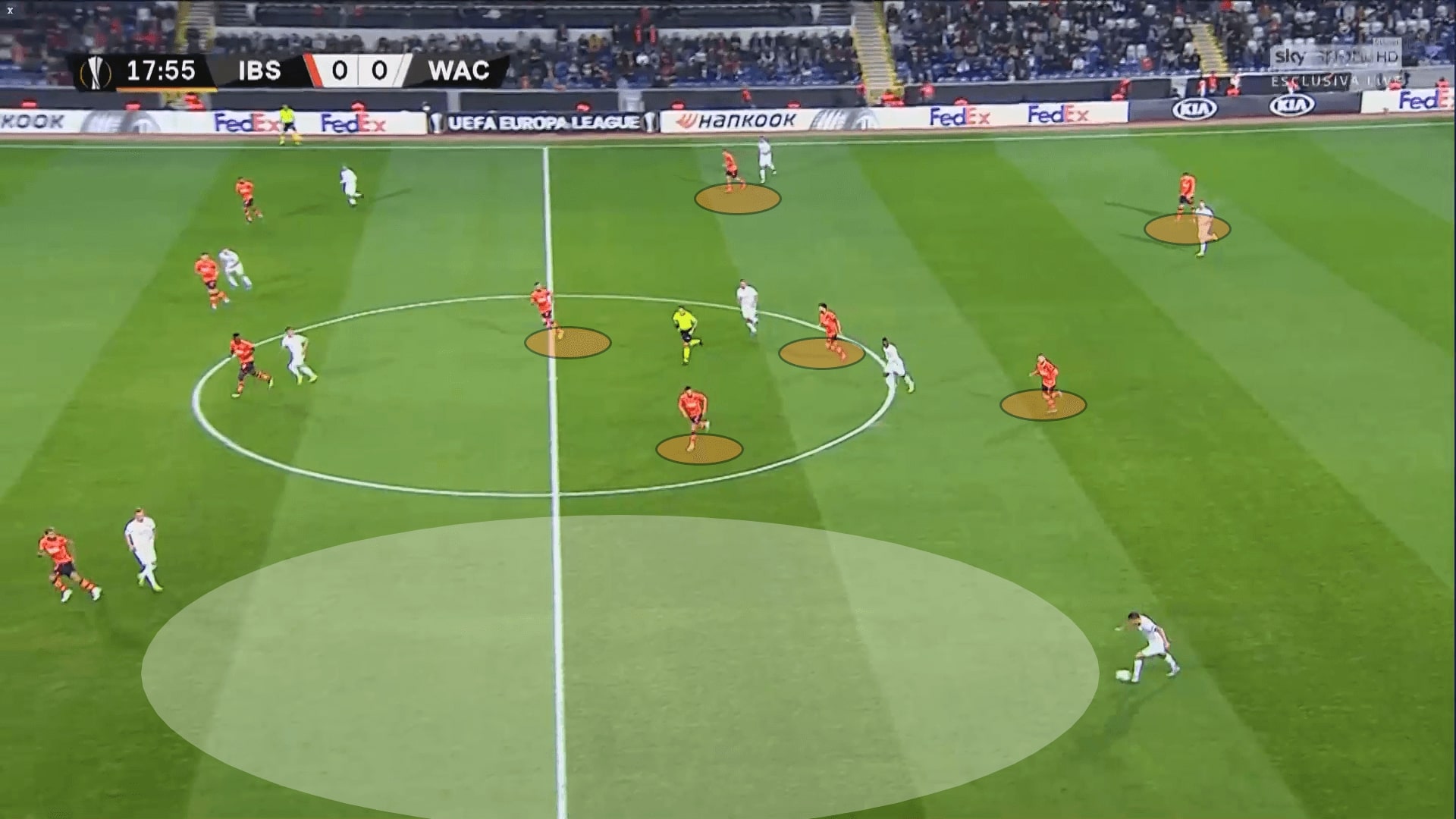 Since the press and the midblock was not reliable enough, on many occasions, the defenders had to step out early to approach the attacking players. Usually, a pass to the centre triggers the centre-backs’ defensive actions. If Başakşehir were trying to deny a pass, then, a full-back would join the midfield line, similar to the descriptions on their defensive shape as explained.

For example, you could see Azubuike was a bit far from the weak side, but there was a Wolfsberger player occupying the half-spaces. Then, instead of the centre-back moving, it was the former Manchester City defender, Clichy to shut the passing option. 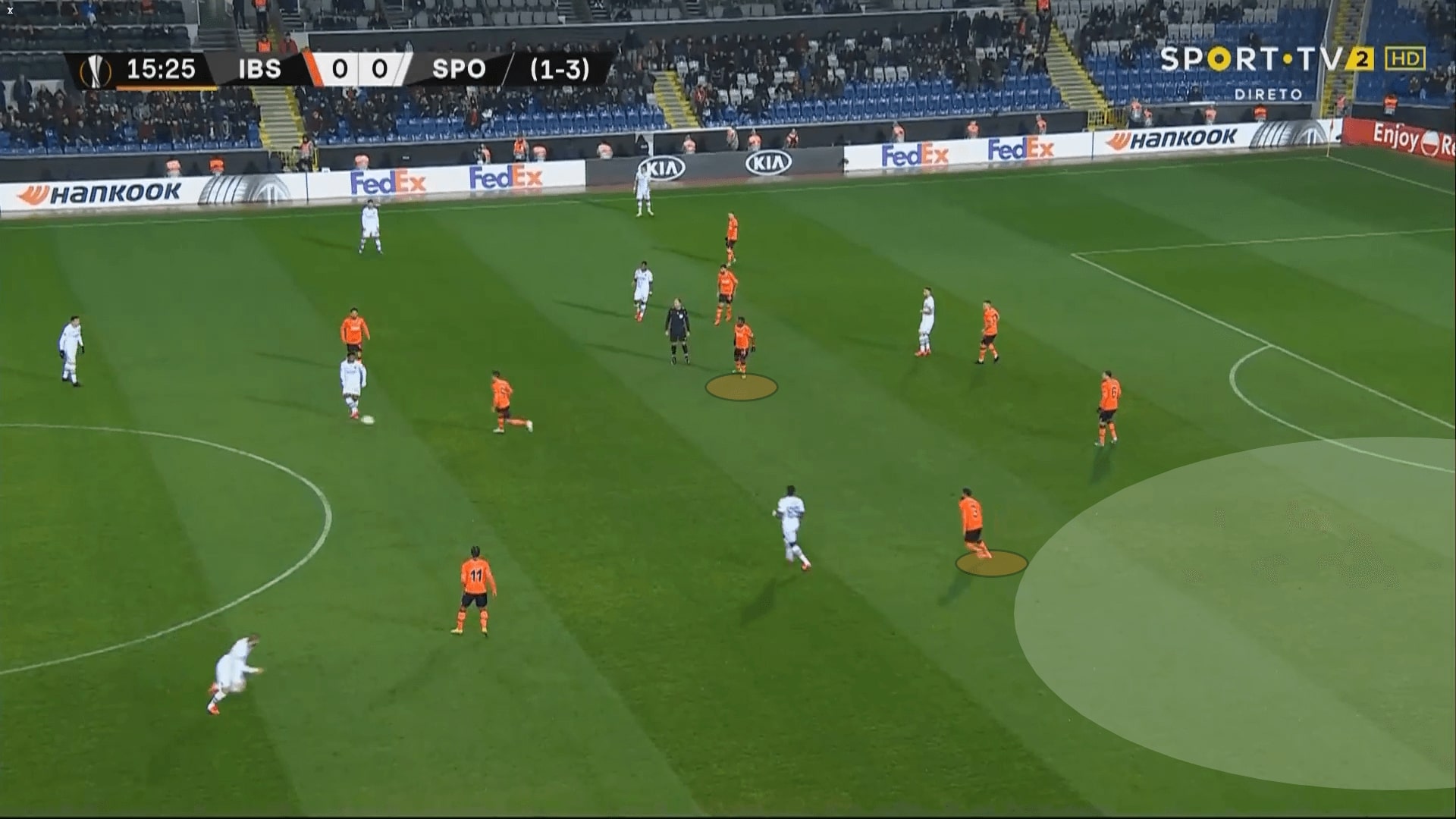 As mentioned, a pass to the centre triggered a centre-back to step out. The idea was to force the receiver back to the goal, prevented him from turning or having a wide-angle for his next move. This would delay the attack, win the time for the midfielders to retreat and organize the defence.

For example, you could see Alexandru Epurenau left his position to pressure the Michael Santos shirt initially. Under pressure, the Uruguayan was unable to turn and face to goal, he had to take another touch to create a better angle for a pass. In this process, Crivelli had the time to track back and close Guillermo Varela. 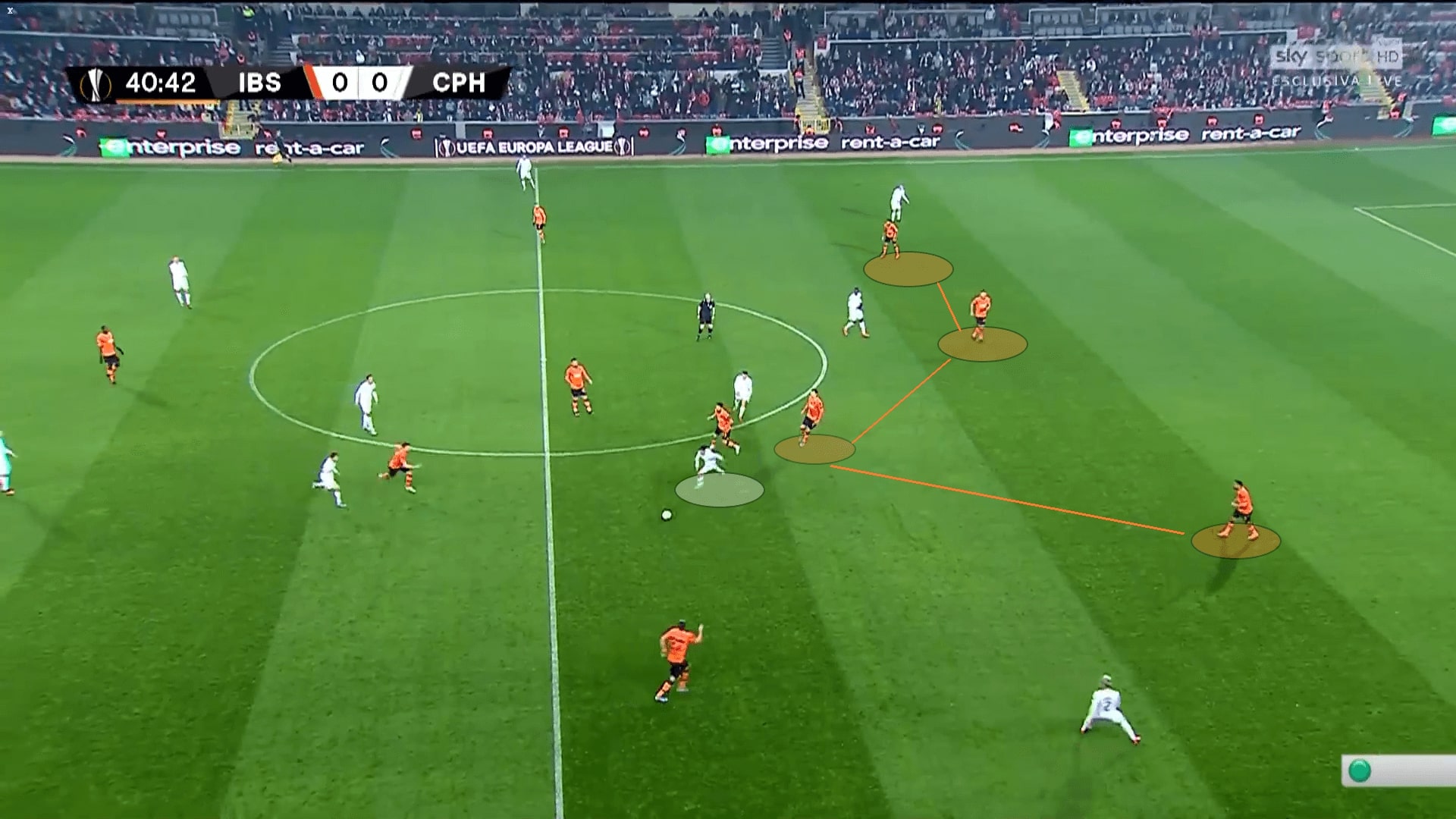 However, this approach might be risky when their opponents were prepared to exploit spaces behind the centre-backs. This happened when the centre-back was not quick enough to pressure the target.

In this example, both Başakşehir midfielders were far away from reaching Breel Embolo. Epurenau came out to deal with the Swiss international but he was way too slow. Meanwhile, the moment Embolo headed the ball, Florian Neuhaus already made his run behind the Moldova defender. None of the Başakşehir tracked Neuhaus’ run and Başakşehir conceded a shot. 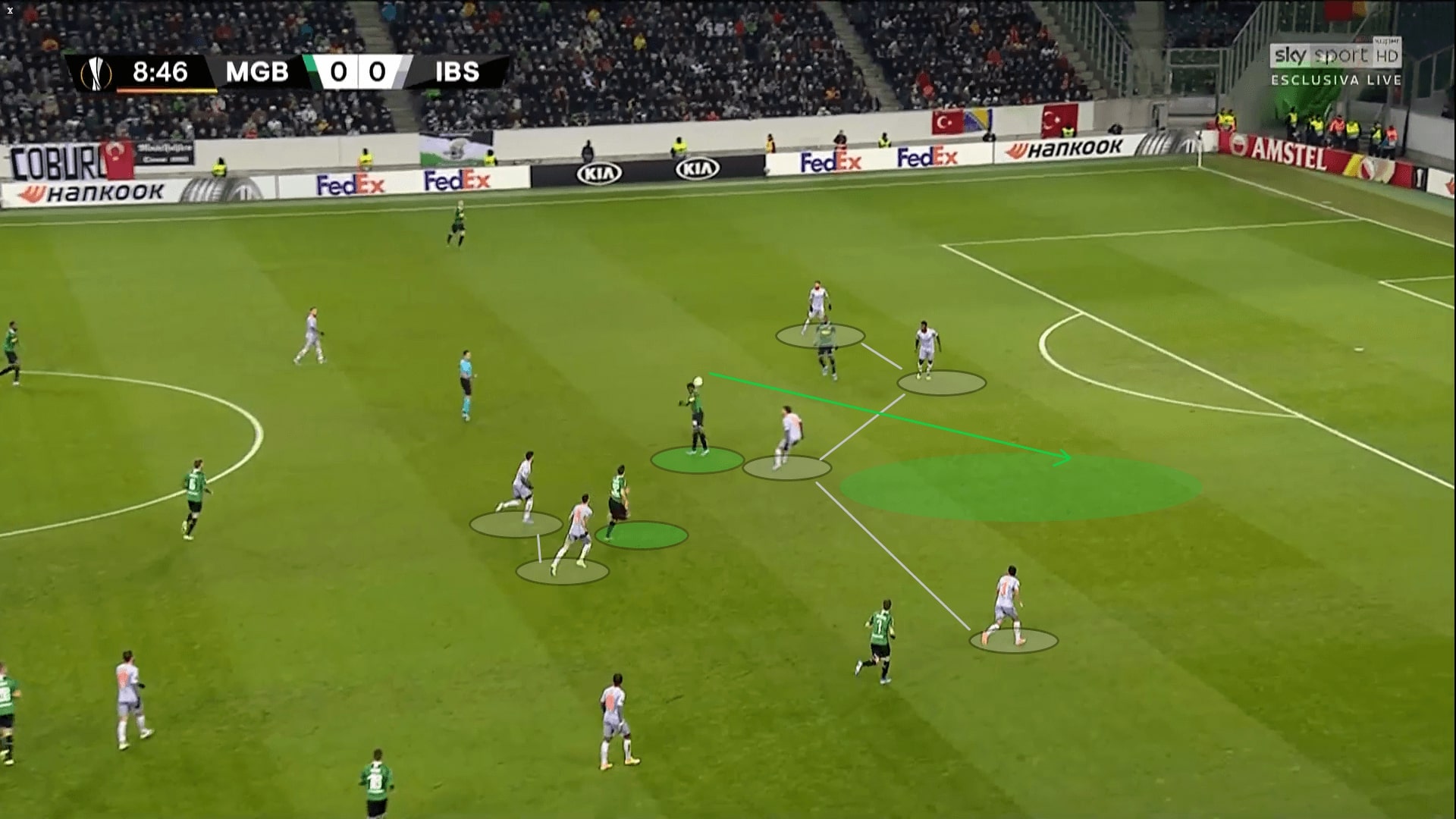 Because of the unstable defensive shapes of the team, Başakşehir’s protection to their half-spaces was insufficient. Part of the reasons was the structural issue. As mentioned, the defensive duties of the wingers were low, sometimes the full-backs were isolated.

In the following image, you can see Mönchengladbach had one player occupying the half-spaces, another stayed wide at the touchline. The position of Başakşehir right-winger, Višća did not help to shut any of the passing lanes. Their right-back, Caiçara was left in a 1 v 2 situation, he could not deal with both players. The Brazilian guessed Nico Elvedi was going to find the wide player, so he left his initial target and moved to the sideline. However, this was the body feint of the Swiss international, who penetrated through the half-spaces. 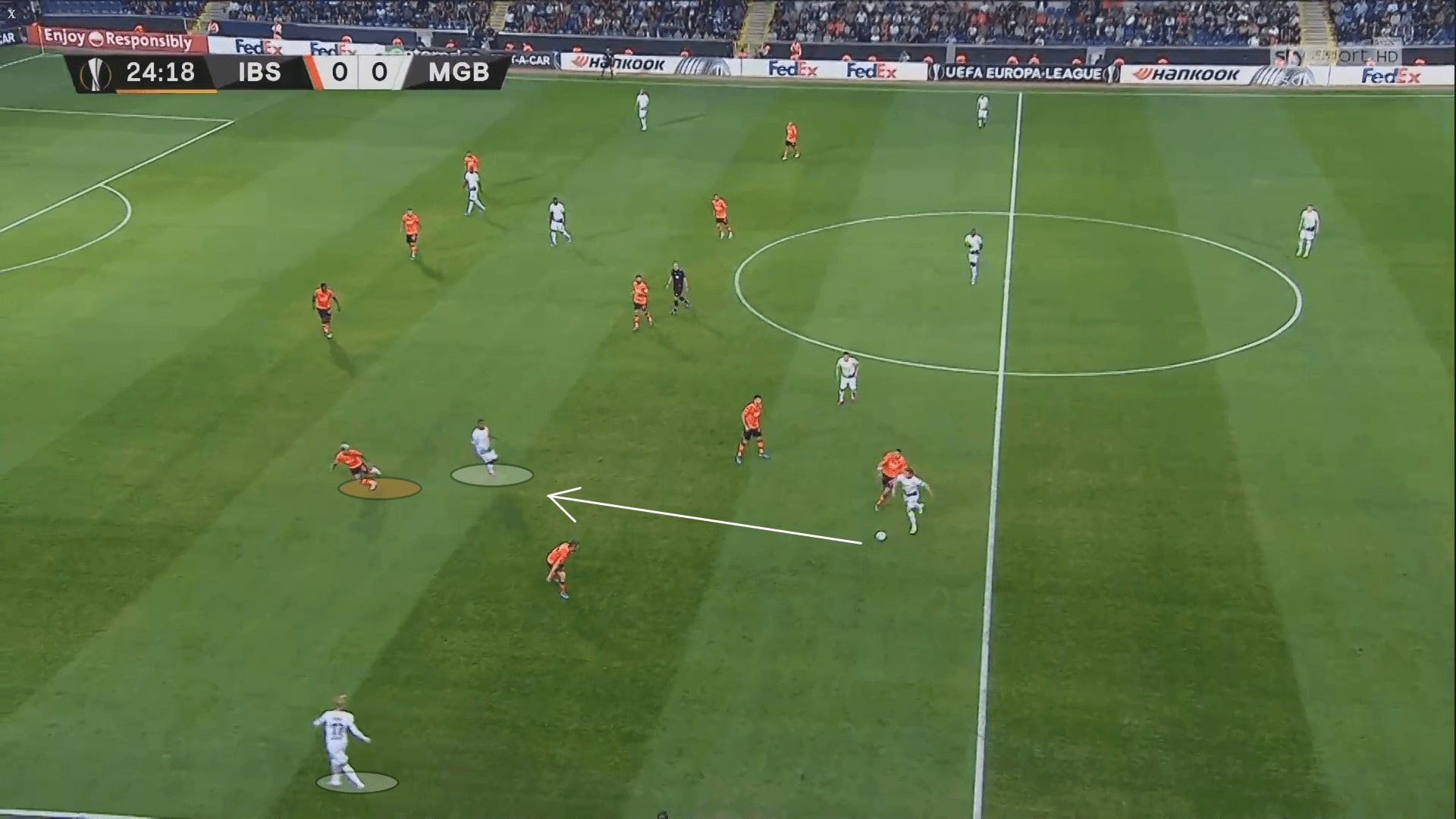 On other occasions, because of the limited awareness of the defenders, Başakşehir’s opponents could easily pass through the half-spaces. Some of these types even led to a shot.

The following example is taken from the Sporting loss. In the case, the body orientation of Ponck was suboptimal. He paid attention to the player in front of him, and he neglected Luciano Vietto. The gap between Ponck and Caiçara was then exploited by the Argentine’s run and the pass of Rafael Camacho. 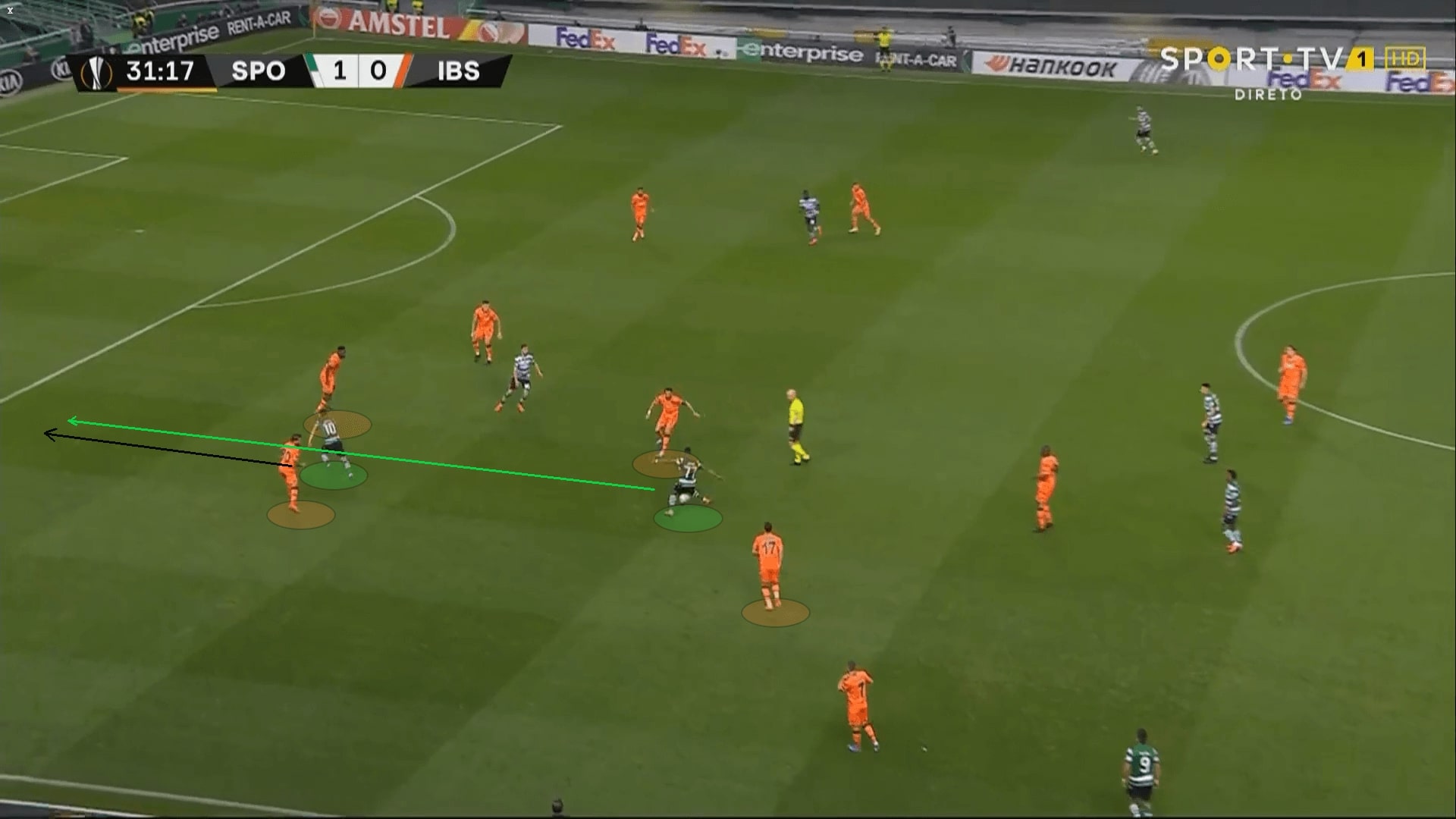 The last image we are going to demonstrate is the situation when a full-back stepped out. As shown in this image, Ponck went to approach Aleksandar Kolarov alone. With Jordan Veretout’s presence, Roma temporarily created a 2 v 1 against the right-back. When the Frenchman ran behind Ponck at the half-spaces, none of the Başakşehir tracked him. 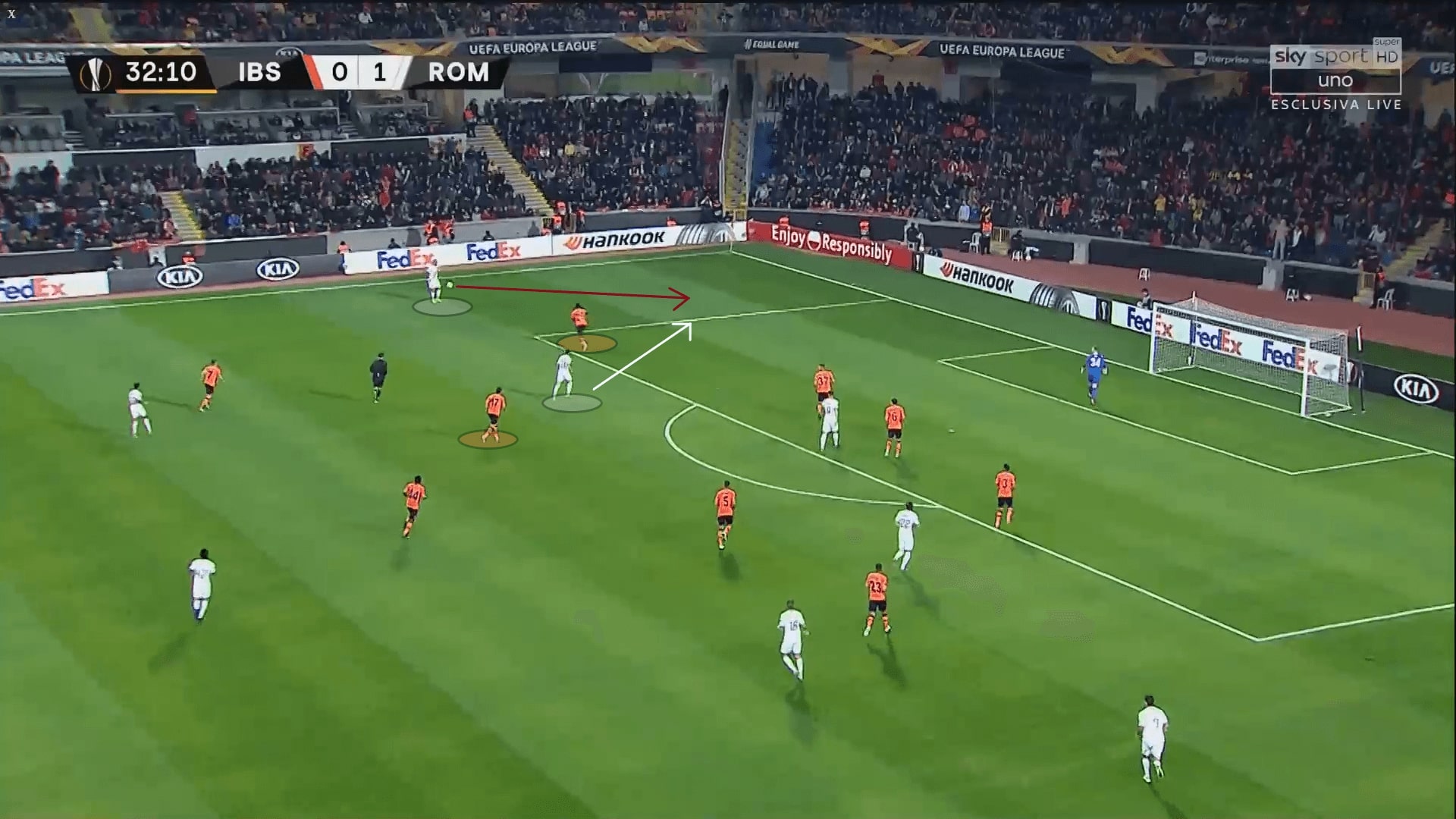 In the foreseeable future, we are going to publish another analysis of Başakşehir’s offensive style of play. Comparing Buruk’s offensive and defensive tactics, the latter was less detailed. Their xG against per game was 1.5, but the distribution was uneven. Against a strong opponent like Fonseca’s Roma, they conceded seven in two games. On other occasions, given the limited threat posed to the goal, they kept the clean sheets easier. How to balance the choices of players and their defensive efforts is going to be a task for Buruk to solve.