Phoenix Rising has seen a lot of success in the past few years, winning the Western Conference by 18 points last year and currently finding themselves at the top of USL Championship’s Group B with 23 out of a possible 33 points. While much of the focus deservedly goes to their high-flying attack, one of the core parts of their success is the play of their midfield, particularly the play of defensive midfielder Kevon Lambert.

This scout report will provide a tactical analysis of how Kevon Lambert fits into Rick Schantz’s tactics. The analysis will examine how Lambert participates in the Rising’s build-up, his contributions when defending as well as transitioning to attack, and finally a summary of places he can look to grow as he continues to develop his game.

Kevon Lambert joined Phoenix in 2017 and has become one of the first names on the team sheet. This season, he’s played every minute except for a 10 minute period against Orange County SC, when Phoenix was pushing for a goal after going down 1-0. Lambert is one of five midfielders who log consistent minutes for Phoenix; however, he rarely gets rotated with the other four midfielders in terms of playing time. His role as their defensive midfielder sees Lambert consistently protecting the back line while also working with his teammates to press effectively and regain possession as quickly as possible. His defensive contributions make him a key attribute for Rick Schantz and Phoenix Rising’s success on the pitch.

As the lone defensive midfielder in Rising’s 4-3-3, Lambert’s role in the build-up is incredibly important. He’s the main link with the back four and the front five. When his distribution and connection with teammates is working, Rising’s success in getting forward is much more apparent. Lambert sometimes is forced to drop to help his back line break the first line of pressure. 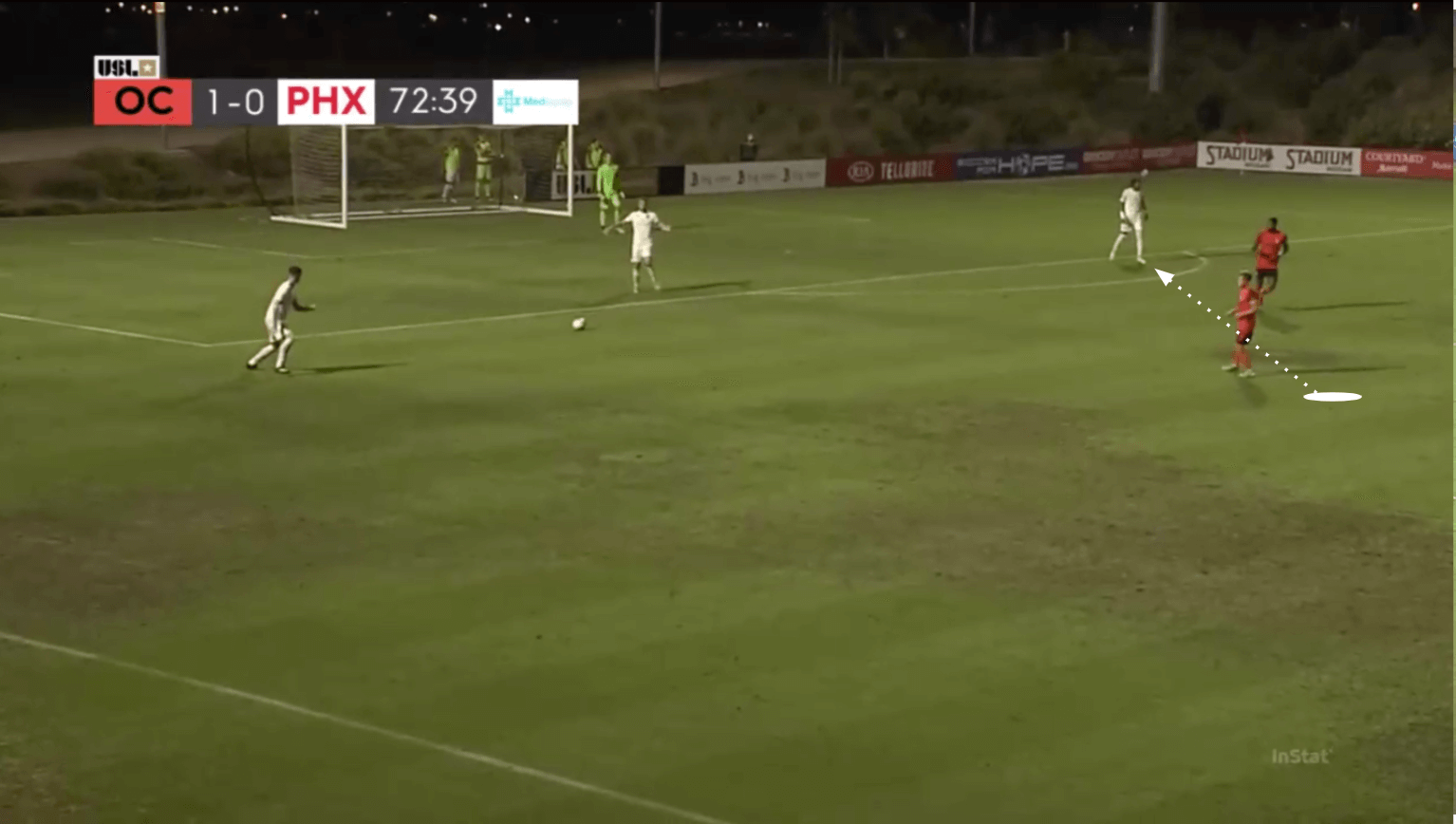 Against Orange County, Lambert was consistently dropping in order to provide his team a numerical advantage. In the image above, Lambert drops to the left of his two centre-backs, essentially forming a back three. This created a numerical advantage for Phoenix. The back three were able to stretch Orange County’s front two, eventually opening up space in the midfield to progress the ball. This stretching of the front two occurred because of Lambert’s recognition of the pressure that Phoenix was under and his repositioning in response to that pressure. 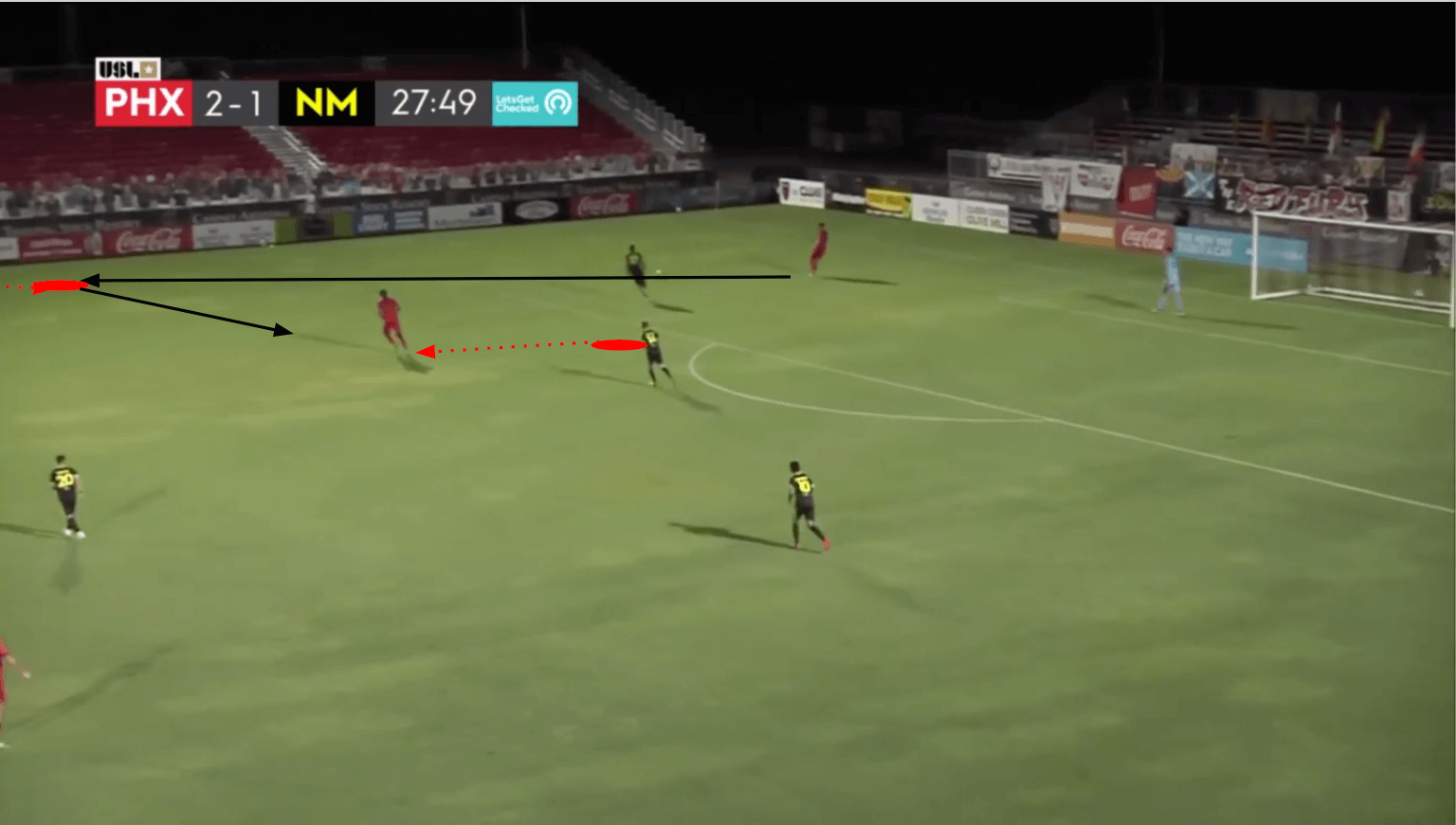 Oftentimes, Lambert will find himself in the cover shadow of opponents who are pressing Rising’s centre-backs. While the frequency of this is concerning (and will be addressed later), Lambert does well to support teammates higher up the pitch when they receive the ball, as shown above. In the image above, Lambert is unable to receive the ball, so Rising is forced to try to progress the ball down their wings. As the ball is being played wide, Lambert moves to support his teammates with a third man run. This allows his right-back to receive the ball and lay it off to Lambert. Rising has now broken their opponent’s first line of pressure, and can make their next move through Lambert, who is the forward-facing player. 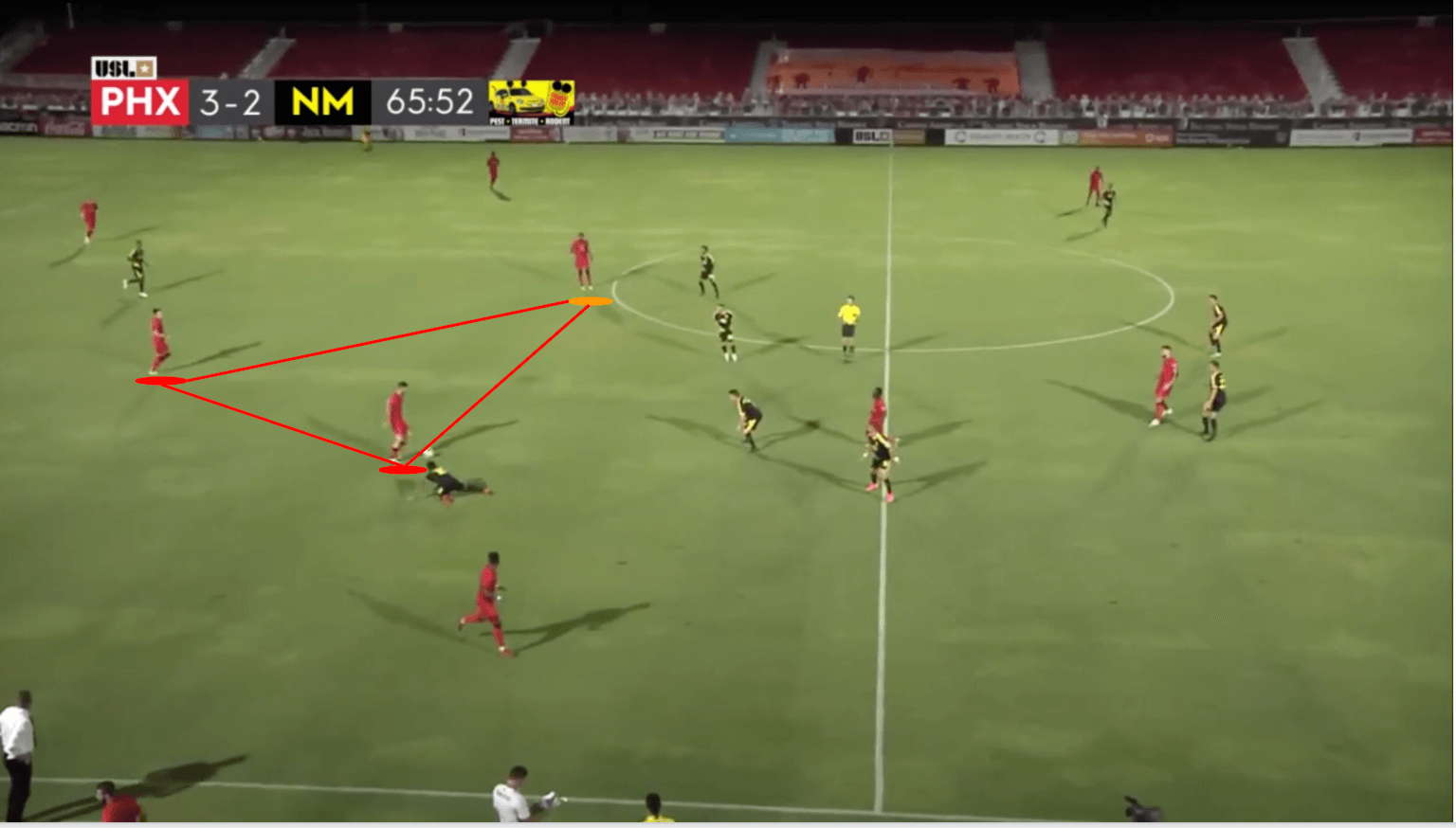 At times, Lambert will rotate with the other midfielders in order to have a different option progressing the ball from the back.  These aren’t necessarily rotations to dismark, but rather just a qualitative rotation that allows for a different midfielder to try and progress the ball forward. In these situations, Lambert does well to execute wall passes and create more space for teammates by attracting opponents with the aforementioned wall pass. The fact that Lambert is able to rotate speaks to manager Rick Schantz’s explanation of his midfield, where he admitted that he preferred to essentially have three ‘eights’ in the centre of the pitch who can be positionally flexible. Lambert is certainly capable of playing higher up the pitch, but his biggest strength is certainly in his defensive efforts.

The main reason Lambert is one of the first names on the teamsheet almost certainly stems from his defensive contributions. Lambert is the team leader in both tackles won (13) and interceptions (19). He’s also committed a team high 22 fouls and racked up four yellow cards in Phoenix’s 11 matches. Simply put, he is the physical force behind the Rising defence. A lot of this physicality and excellent defending comes from his ability to properly position himself in relation to teammates and opponents when Phoenix is not in possession. 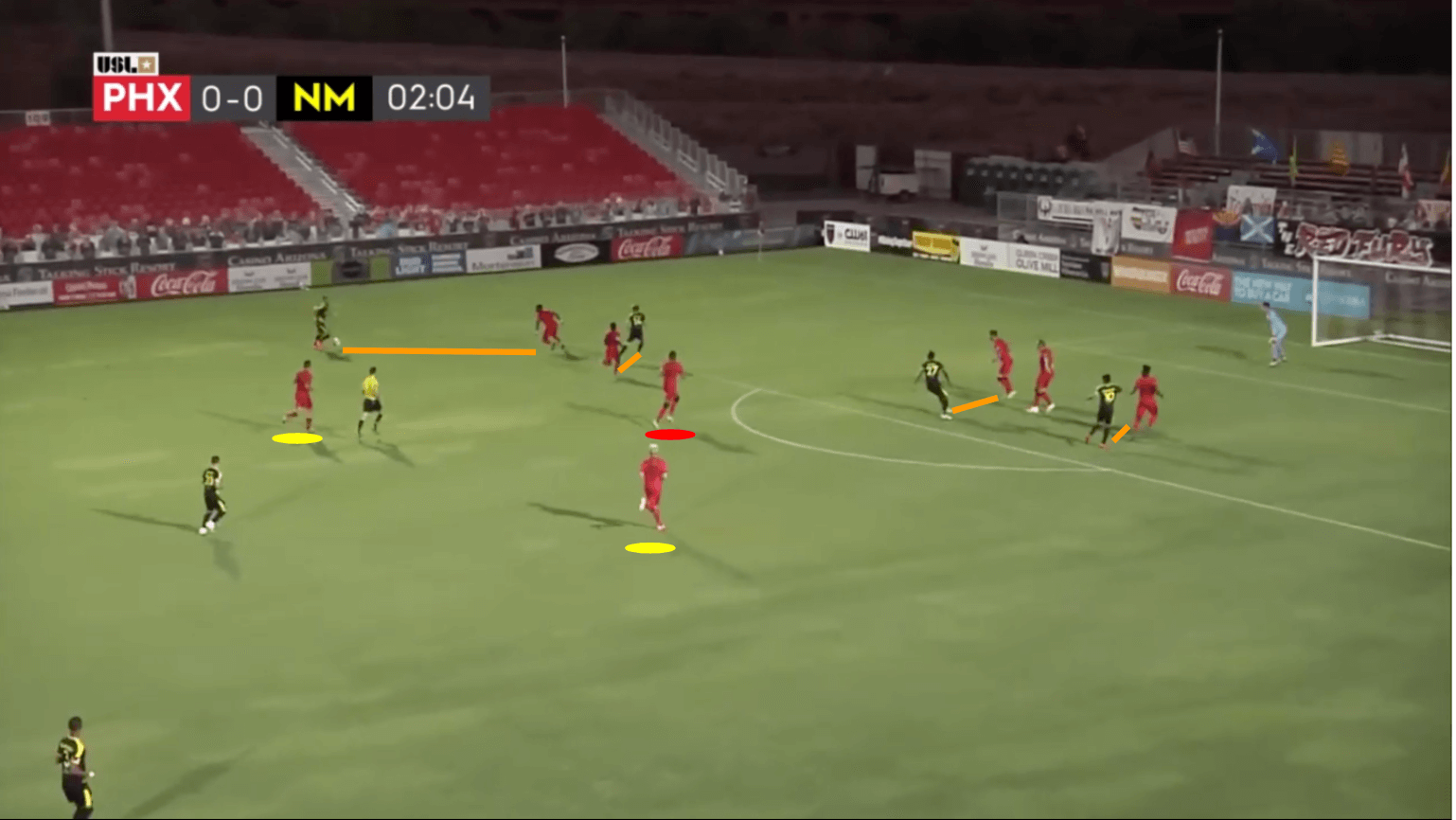 The first example is pretty standard positioning by Lambert, taken from Rising’s match against New Mexico earlier in the year. Lambert, marked in red, is floating between the two defensive lines that have become somewhat disorganised by New Mexico’s movement. As Phoenix’s defenders pick up their men, Lambert floats between the other midfielders (marked in yellow) and his back line. While this movement may seem insignificant, Lambert is actively denying any passes into the centre of the pitch to the two strikers close to his goal. Instead of dropping deeper to mark, he can occupy this space and encourage opponents to try to progress the ball down the wings rather than the centre of the pitch. 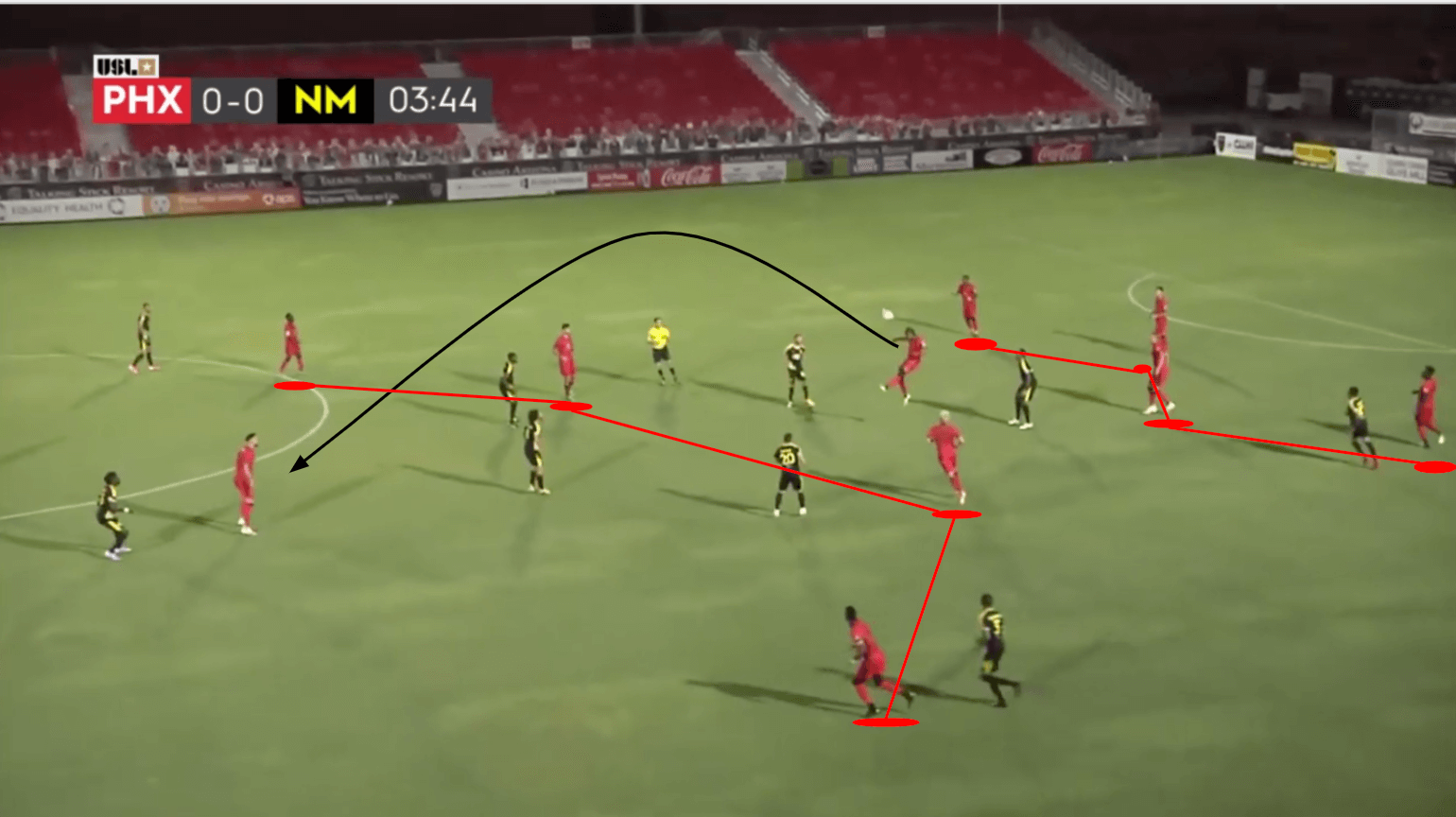 Off of a New Mexico goal kick, Lambert again occupies this space between the lines, although this time it’s for him to find the ball and win the header. In this instance, Lambert uses his height and freedom from marking a specific man to win possession for Phoenix, finding Rufat Dadashov with his header in the process. 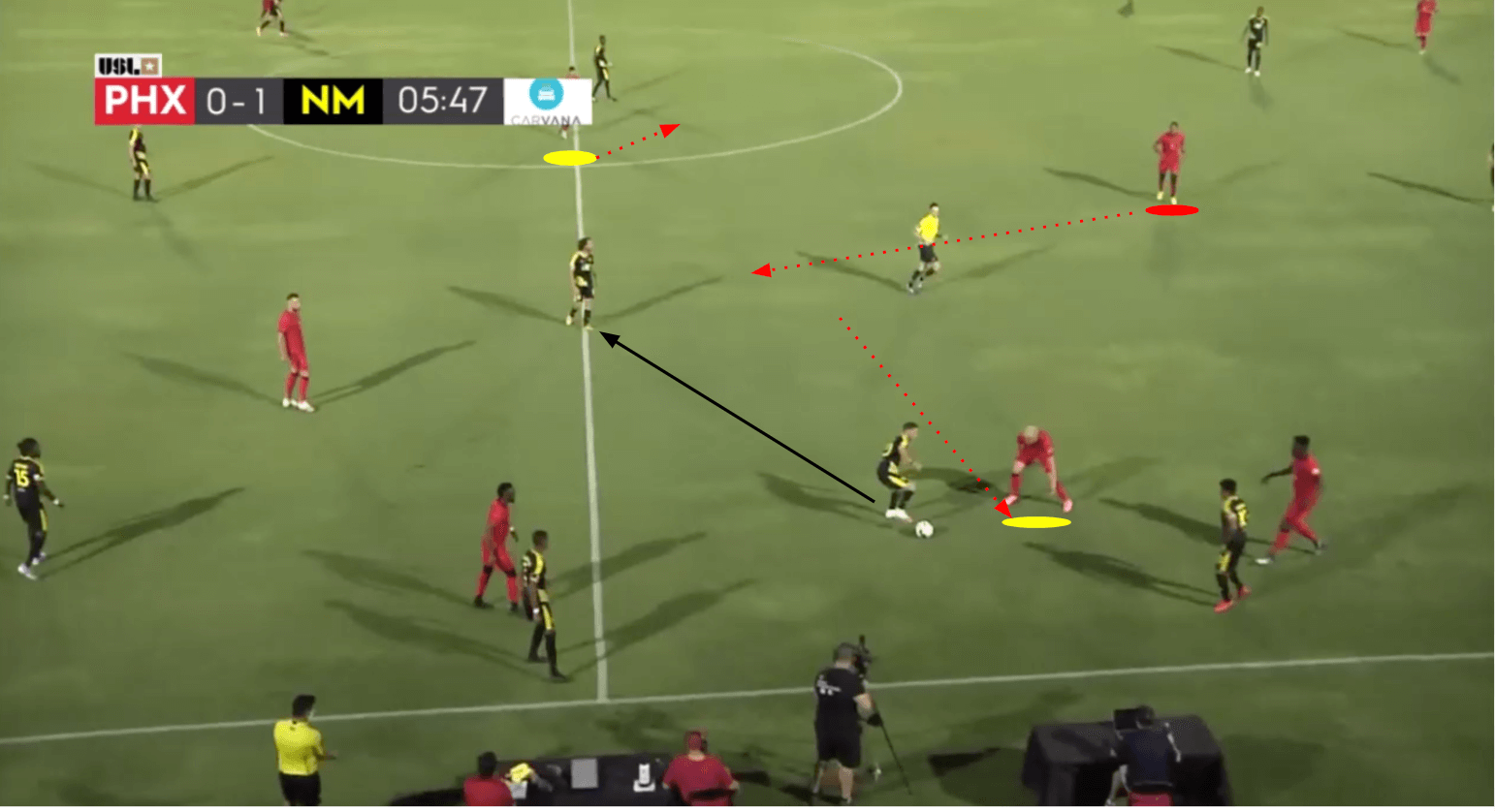 Lambert’s protection of the back line and his positioning to deter interior passes also make him a huge asset for Phoenix. In the image above, Lambert again sits off of the two other midfielders (marked in yellow). Instead of marking the man in front of him closely, Lambert’s first priority is to deny passes into forwards. Those passes against Phoenix can often be deadly, as Rising’s centre-backs tend to close down aggressively yet slowly, often getting beaten in the process. Lambert stayed put in this scenario until the ball was played horizontally. At that point, he closed down his man while preventing any vertical passes from occurring, forcing New Mexico to continue to move the ball horizontally across the pitch. 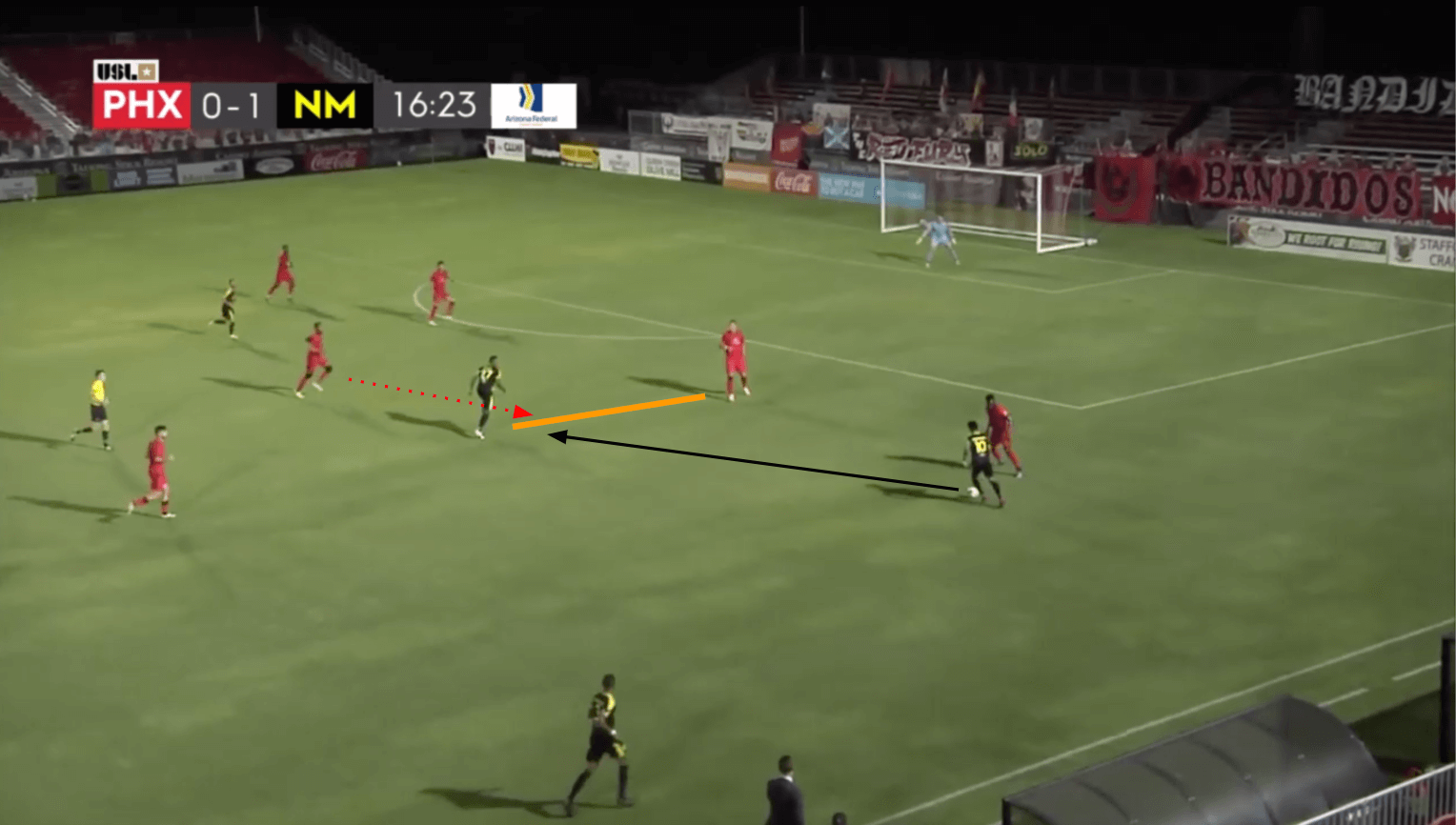 Again against New Mexico, Lambert’s positioning proved to be key in his ability to close down opponents and win the ball. In the image above, Romeo Parkes, the New Mexico forward, was able to separate from his defender and seemingly find space for himself. While Parkes focused on receiving the ball, Lambert watched and waited for the actual pass. When it was finally made, he was able to swoop in and not only intercept the ball, but also find his teammate with his first touch. This reading of the situation is a perfect representation of Lambert’s defensive strengths: he reads the game well and reacts accordingly to shut down most of Rising’s opponents’ opportunities.

Phoenix is a team that is deadly in transition, and a lot of that threat comes down to the speed of Junior Flemmings and Solmon Asante, who both start as wingers for Phoenix. That being said, in order to take advantage of their speed, precise passes from the midfield during a transition to attack need to happen on a consistent basis. 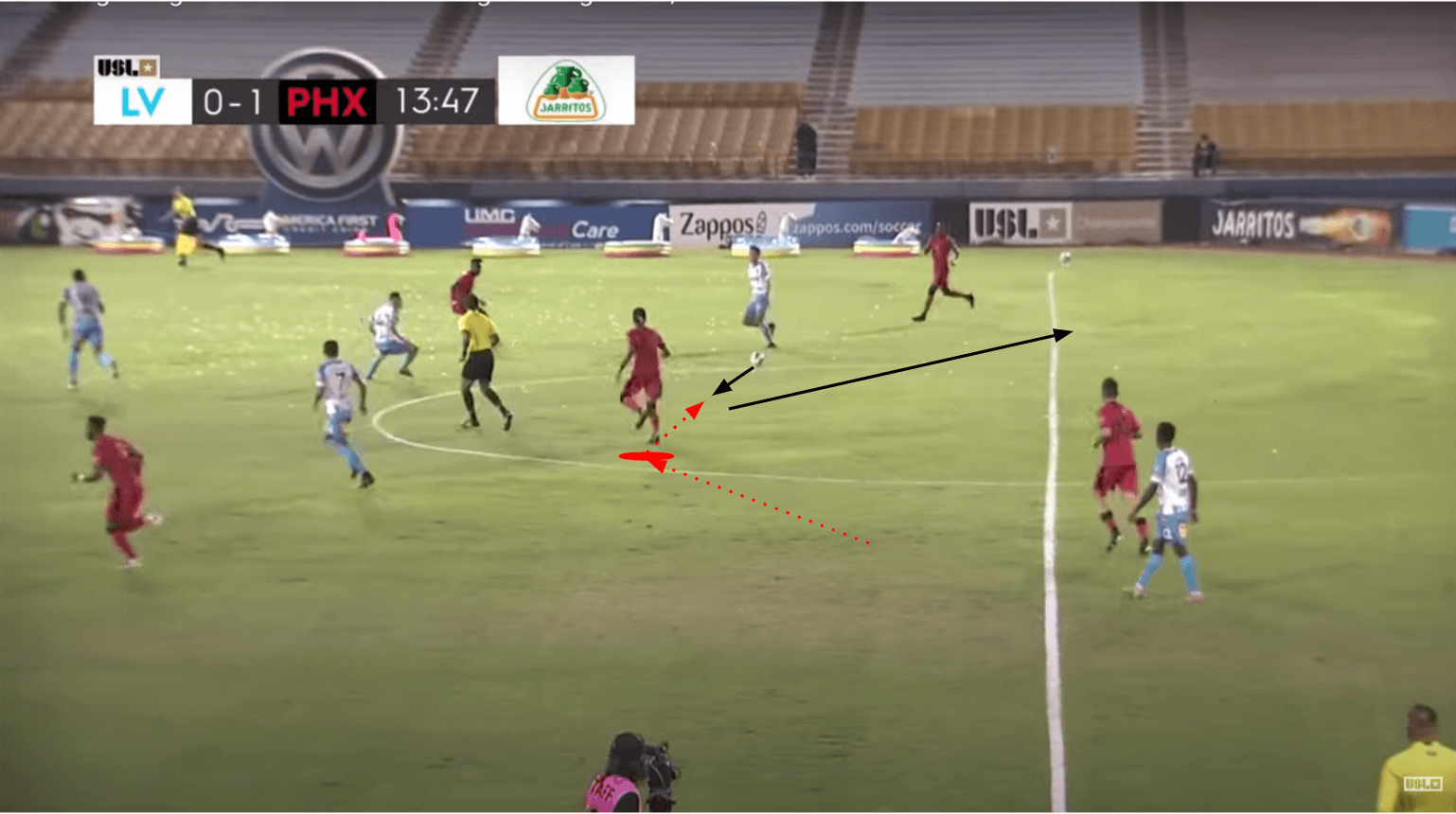 Lambert demonstrated his ability to do so against Las Vegas last month. As the Las Vegas attack switched the field, Lambert dropped back towards the centre of the pitch. As the Lights attacker misplayed a pass, Lambert had his head up as he attacked the ball. This allowed him to recognise Junior Flemmings (Rising’s most dangerous player) in a large amount of space. From this play, Flemmings was able to progress up the left side of the pitch and win Rising a corner. 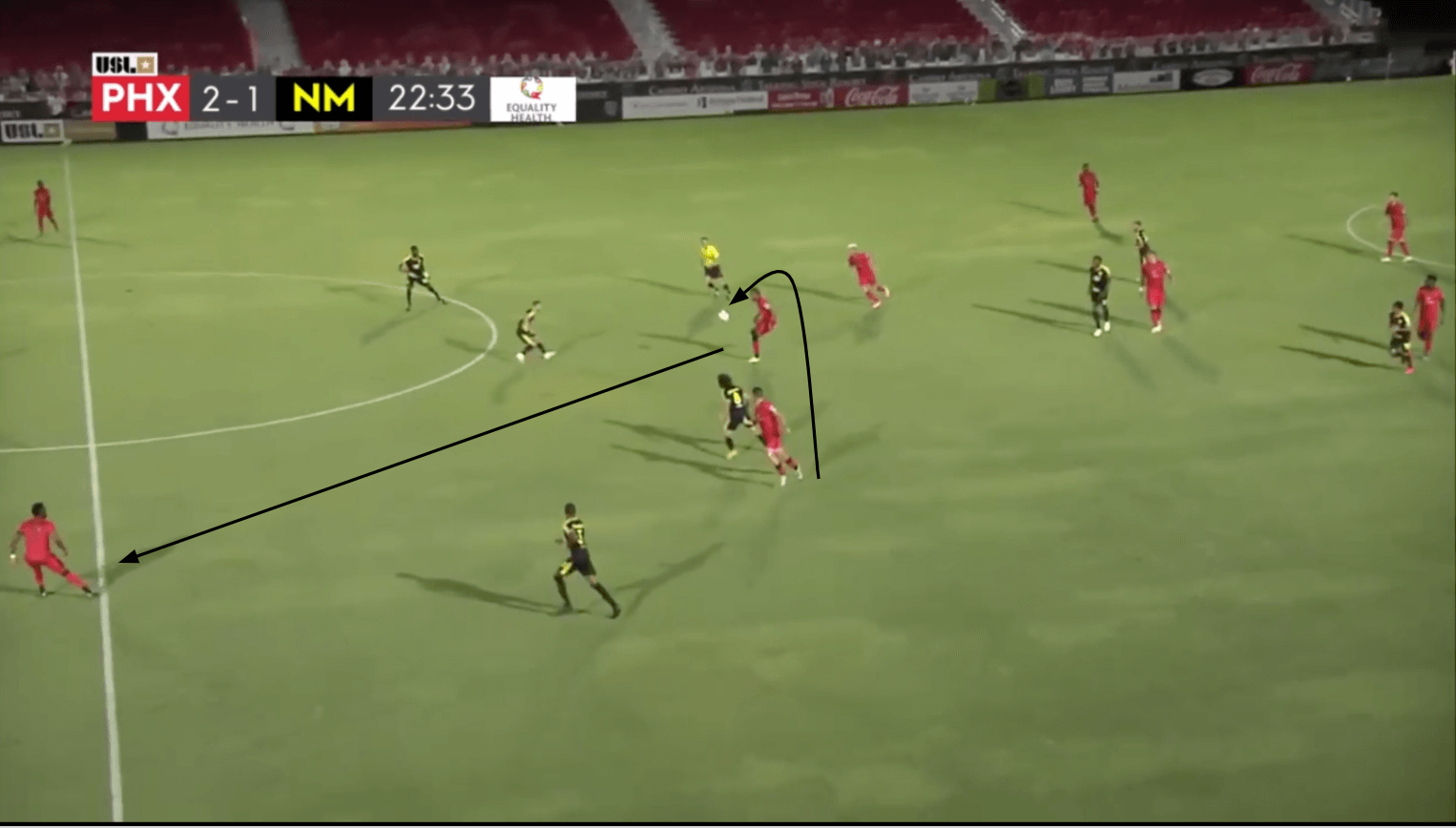 Similarly, against New Mexico, Lambert was able to produce a similar pass that again found Junior Flemmings. This time, he was able to use his first touch to take a pass out of the air following a mistouch from Jon Bakero. Lambert’s pass not only took the ball out of the air but also allowed Phoenix to again move up the pitch. This time, his pass resulted in a Solmon Asante shot that was ultimately saved by the goalkeeper. 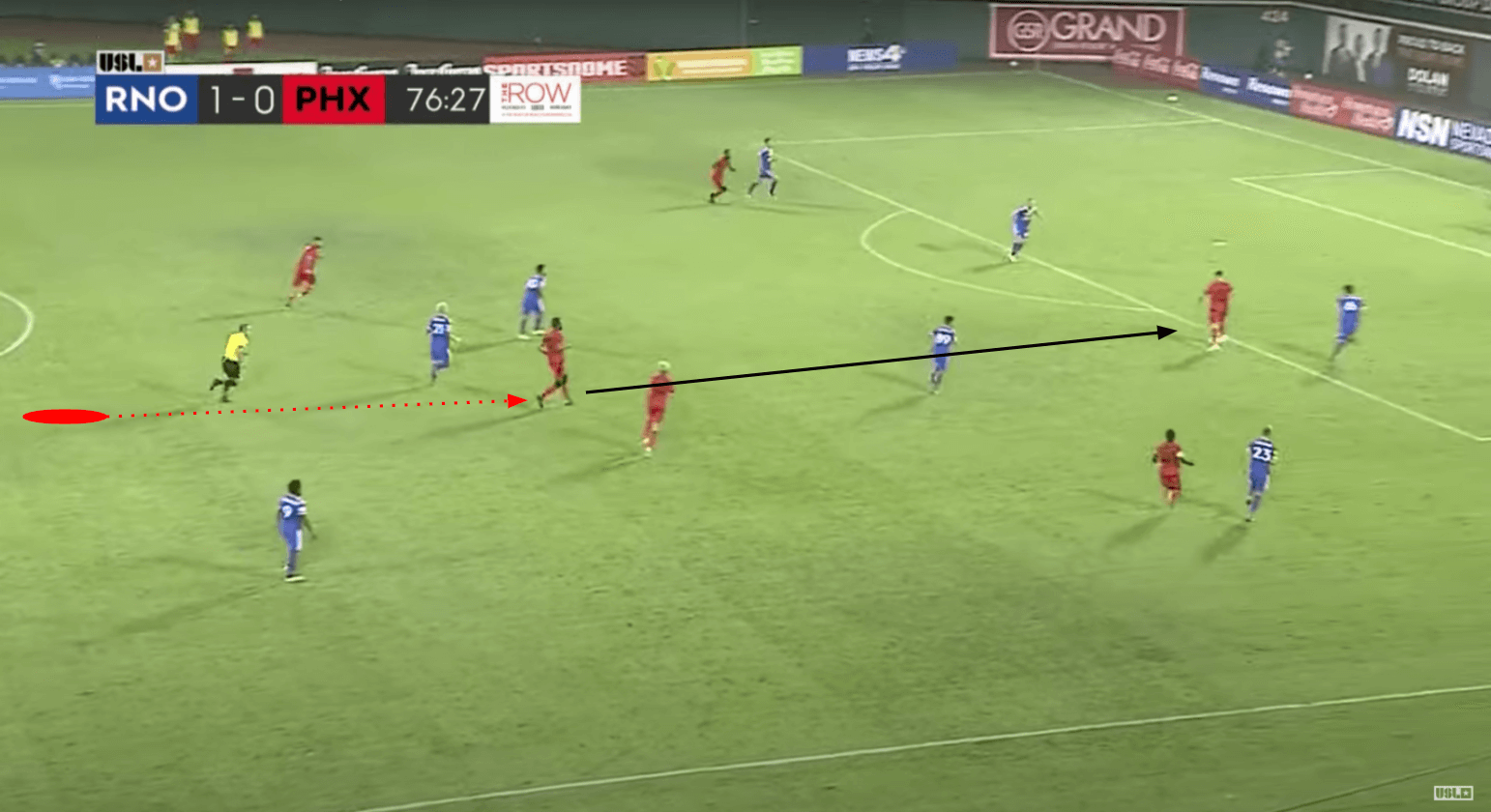 In their match against Reno, Phoenix was able to tie up the score because of Lambert’s ability to pick out his teammates in transition. Phoenix was pressing Reno late in the match, and a deflected pass rolled into the midfield. Lambert rushed to the ball, holding off the Reno opponent in the process. His first touch played Dadashov into space in Reno’s penalty area, where he curled his shot around the goalie to tie up the match. While the finish was lovely, it would have never happened if it weren’t for Lambert’s awareness and deft first touch.

Lambert is one of the most defensively solid midfielders in the USL. The problems in his game mostly occur when Phoenix is in possession and looking to progress up the pitch from their own penalty area. While he can often pick out passes when facing the goal, Lambert seems way less comfortable in possession when he’s under pressure or has his back towards the goal. 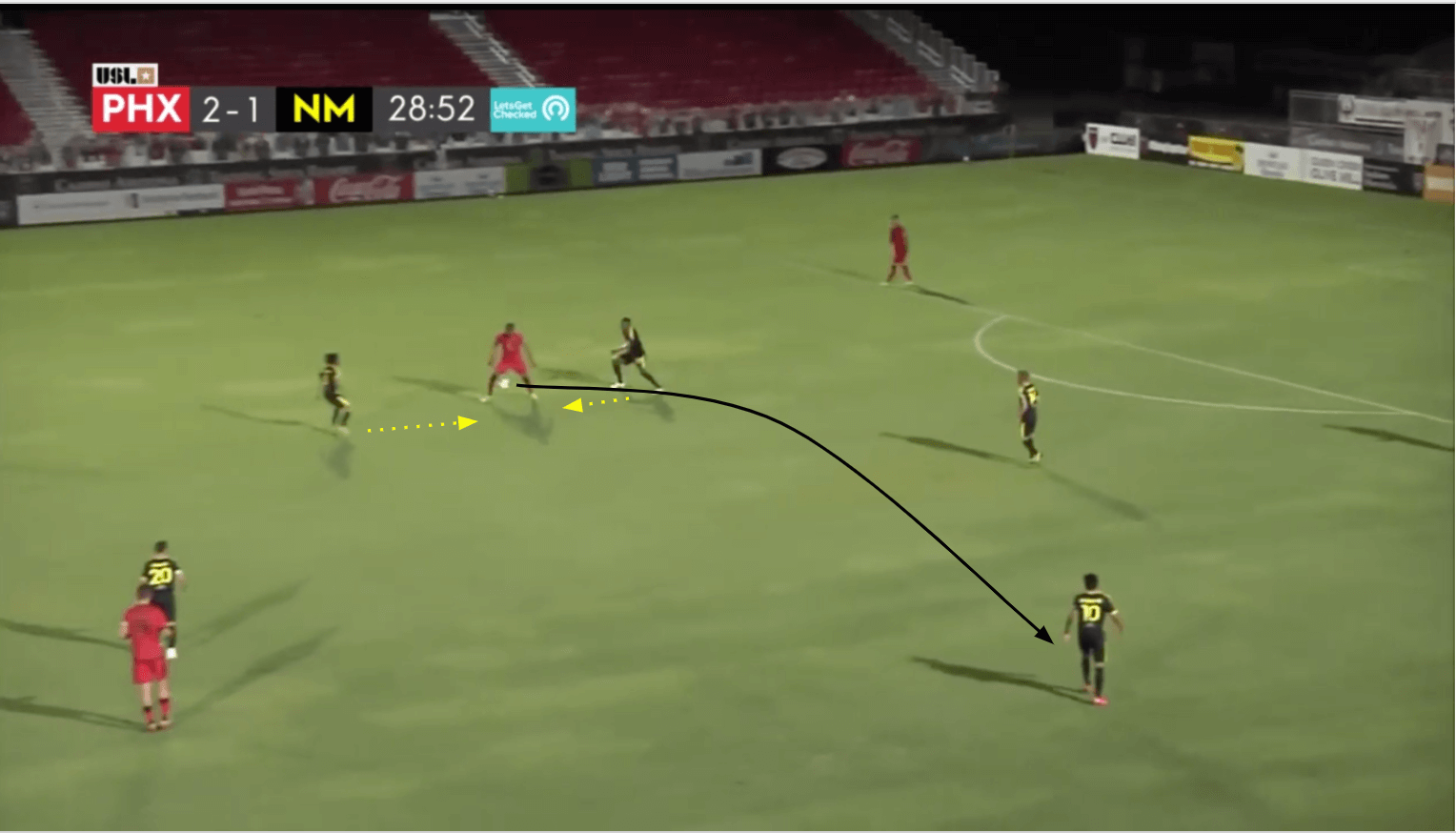 The first example comes from Rising’s match against New Mexico. As he received the ball from his centre-back, Lambert attempted to turn as the ball arrived. The problem wasn’t with this idea, but rather the execution of it. As he attempted to turn, the ball popped up off of his foot. As it hung in the air, the two New Mexico defenders collapsed on Lambert, causing him to panic. In his panic, Lambert played a pass directly to the opponent. While the smart move would have been to send the ball long and out of pressure, Lambert was unable to do so, and Phoenix was immediately put under pressure again. There are multiple examples of Lambert being put in this scenario, which ultimately result in him playing some aerial pass (sometimes as a result of a poor touch) that puts Phoenix under pressure. 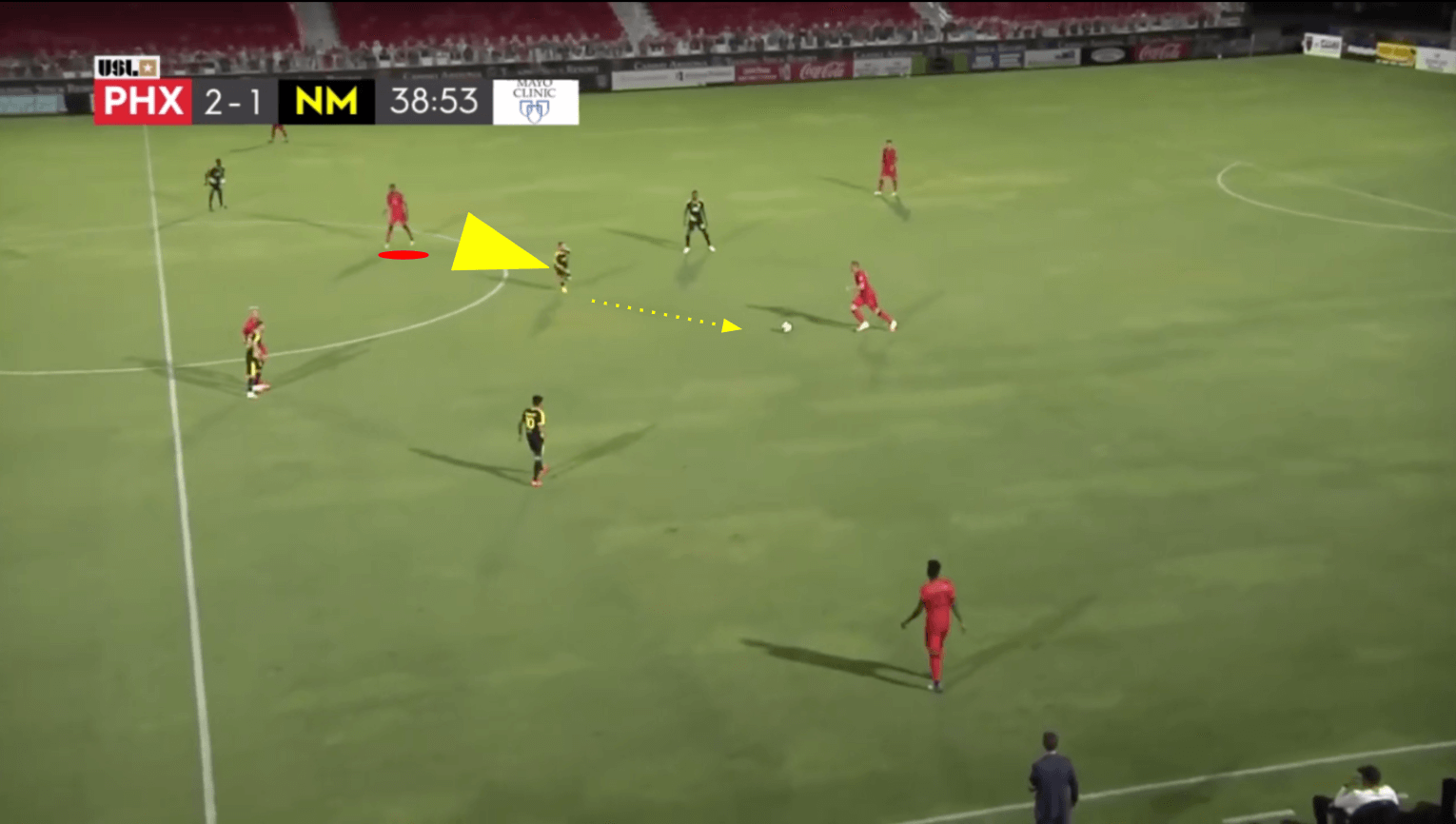 Another example where Lambert can grow as a player is when he finds himself in opponent’s cover shadows when Rising is in their build-up. Oftentimes, Lambert will get stuck in a cover shadow and unable to find space for himself. In the image shown above, the defender is able to actually both prevent him from receiving the ball while also applying pressure to the ball carrier. In this instance, Lambert has the space to find some room if he takes a couple of steps forward into the available space. Instead, he stays put. While this does provide a bit more of a defensive cover, it eliminates passing options in the centre of the pitch, reducing the number of passing options Phoenix has in the midfield.

Kevon Lambert is one of the best defensive midfielders in the USL Championship. While he doesn’t necessarily have the same passing attributes of Joshua Kimmich at Bayern Munich or Rodri at Man City, Lambert’s defensive efforts and positioning solidify Phoenix’s defence. At only 23 years-old, Lambert has a bright future in front of him — a future that could see him end up plying his trade in the MLS.