Kalvin Phillips has been a vital component in Marcelo Bielsa’s exciting Leeds United side this season. The defensive midfielder has played key roles in both defence and attack for the Whites.

First making his way into the Leeds side in the 2014/15 season, Phillips was part of a promising group of academy graduates which included the likes of Lewis Cook and Sam Byram.

Phillips, however, remained at Leeds in the Championship for the following seasons, making a steady flow of first-team appearances. This past season is his third in a row in which he has made over 30 appearances.

Over Summer, Phillips revealed that he had been training as a deep-lying midfielder and as a centre-back under Bielsa. This is in tow with the Argentines’ preference for moving midfielders into deeper positions. This is to aid with ball retention and building out from the back.

In his role as the deepest lying midfielder over the past season with Bielsa, Phillips has gained plenty of recognition for his excellent performances. This analysis will take a further look at his role.

Leeds have lined up in a nominal 4-1-4-1 under Bielsa, which lends itself to a great deal of fluidity. Phillips has been the deepest midfielder, linking up defence and midfield. This means that he shoulders a lot of responsibility for helping United play out from the back. Below we can see a basic diagram of his interaction with the centre-backs.

He is a key pivot as Leeds progress up the pitch. Out of the ball, he also does the classic ‘destroyer’ job of helping shield the defence. This heat map below shows just how much he patrols the area between defence in midfield, both in and out of possession. 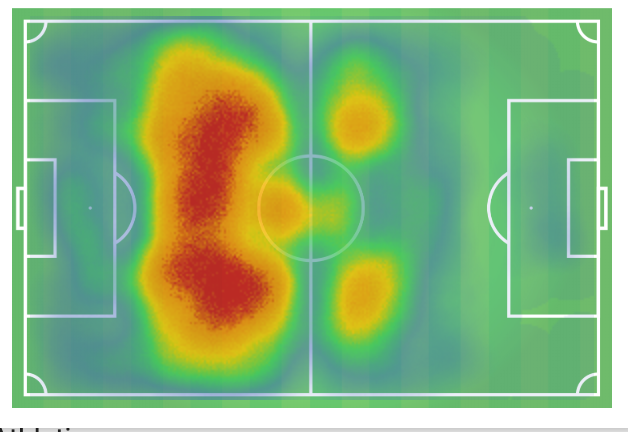 We can also see some heat patches further up the pitch, just past the halfway line towards the flanks. This comes from Leeds’ tendency to attack with a large amount of width. When his side attack through the channels, Phillips will often present himself on the inside half space. This gives the option a one-two, recycling possession or switching play.

Of course, Phillips is also required to press high when needed to, in line with the Bielsa style. He can sometimes be seen bursting from his deep position when he sees an opportunity to effectively press an opposition player.

As previously mentioned, Phillips’ role in the Leeds United build-up is crucial. He is the point of contact between defence and midfield, dropping deep to receive the ball before attempting the get the ball moving further up the pitch. Below, we can see the interaction between them, and the triangle shape often created. 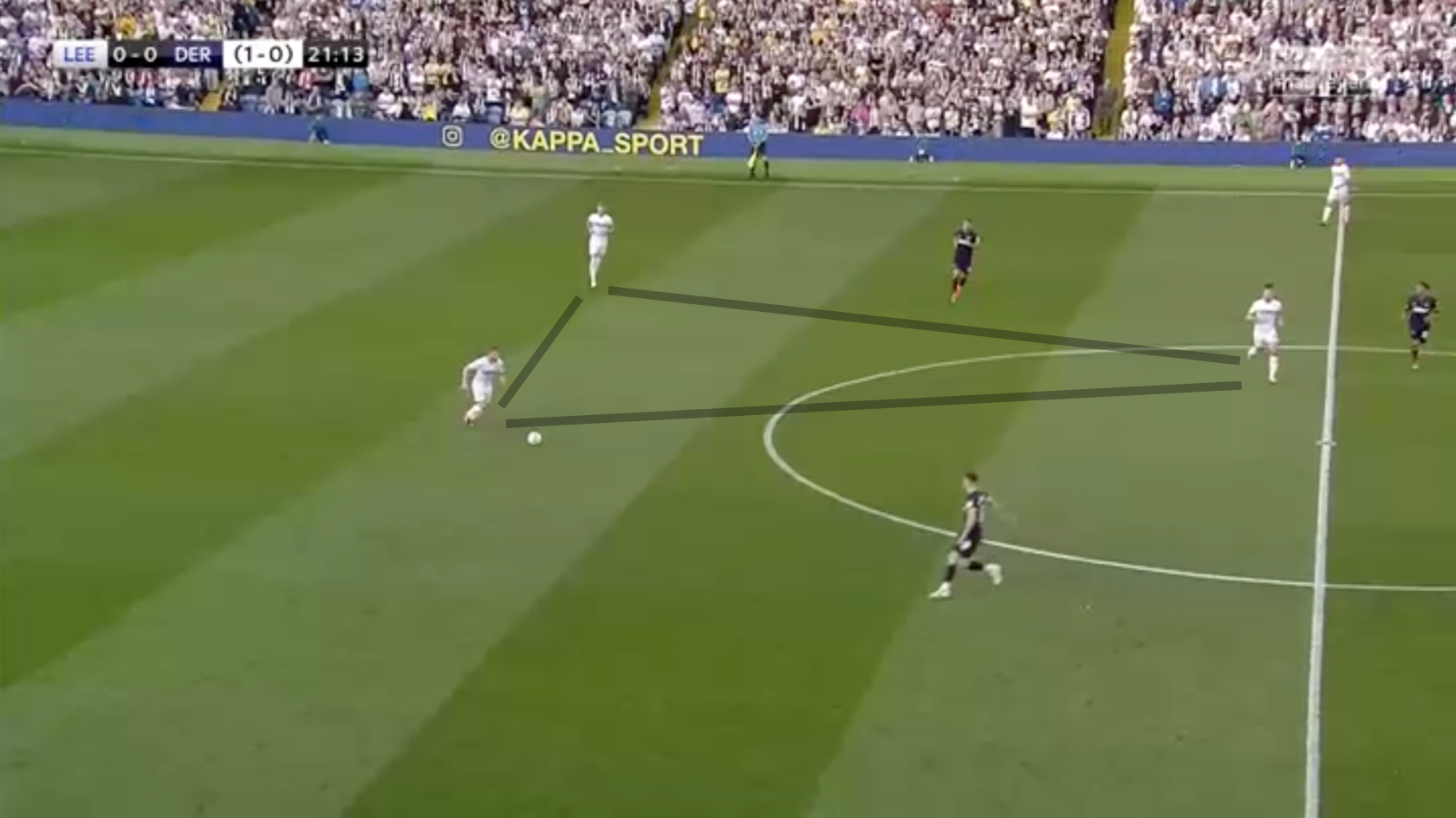 As seen in the heat map, this action zone is a key area for Phillips. He is a constant force in patrolling that area of the pitch, giving options for full-backs as well as centre-backs. In the next image, we can see him shifting the ball across in his zone to left-back Stuart Dallas, after receiving a pass from right-back Luke Ayling. This shifting of possession across the pitch is another important part of Leeds’ build-up, helping to move the opposition around the pitch. 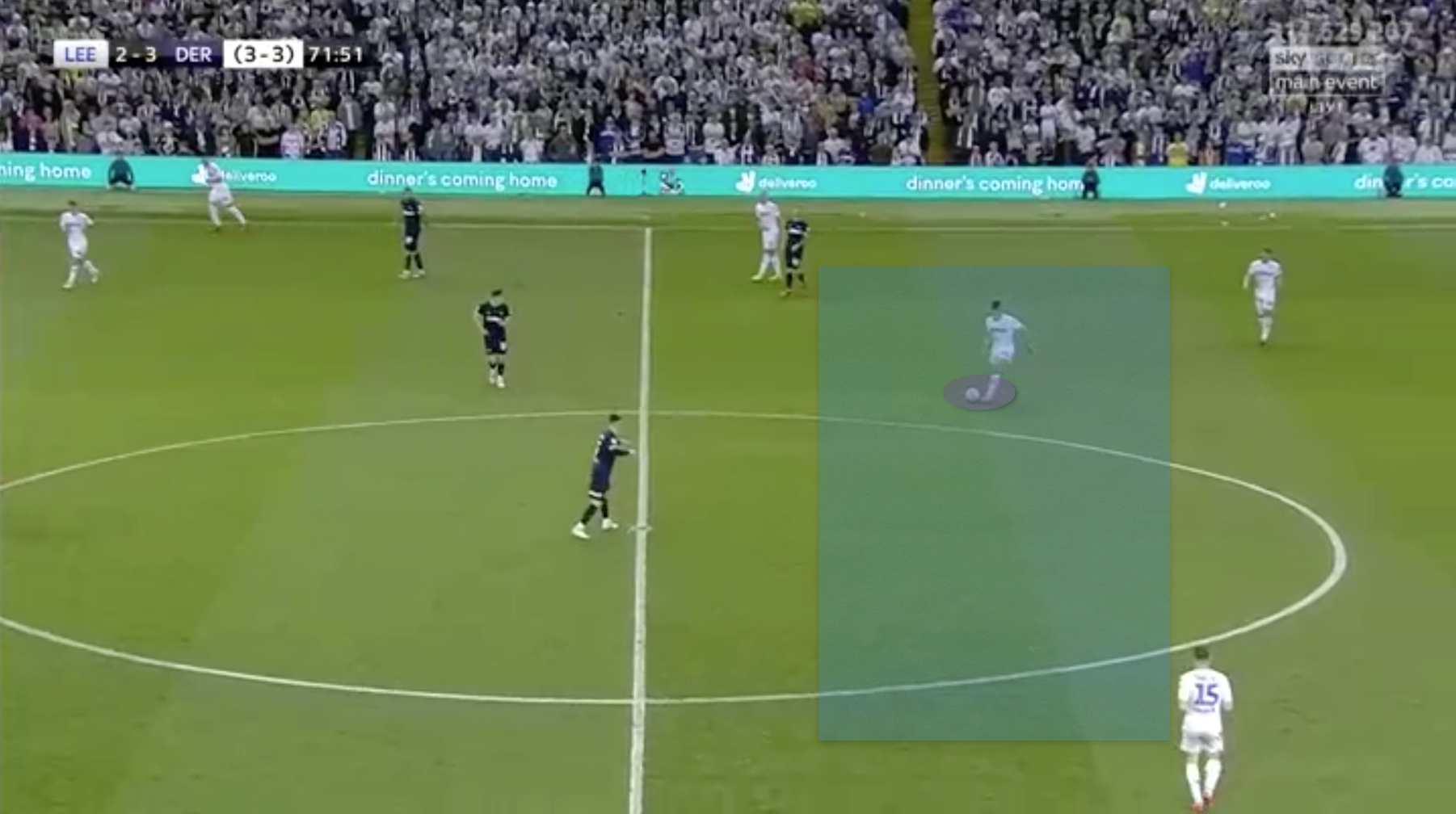 This interaction across the pitch in wide areas is also important further forward. In the image below, we can see Phillips moving out towards the flank to exchange a pass with Ayling. 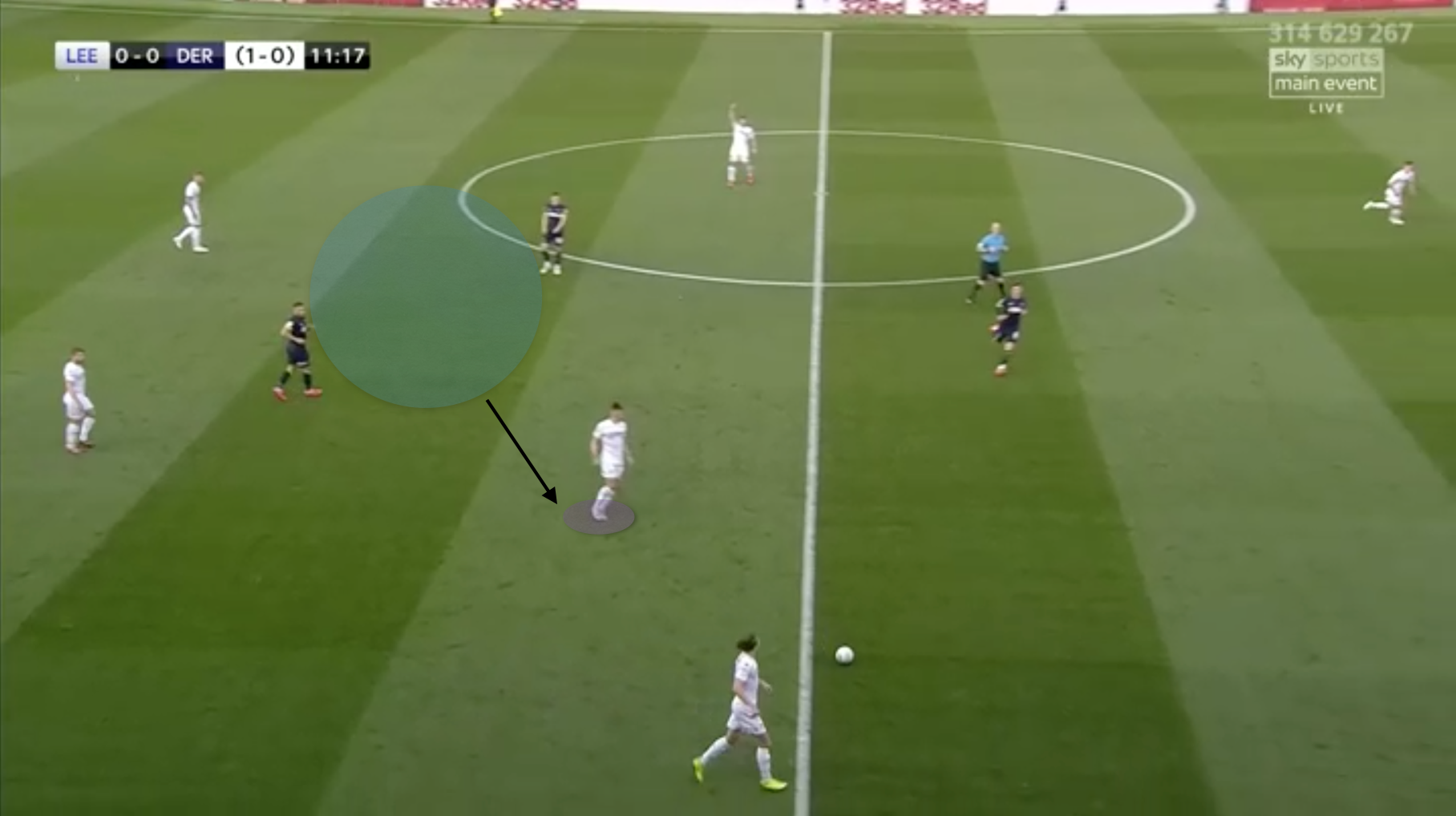 As the attack continues up the pitch, Phillips is again present in that half space channel to give an option to his midfielders and attackers. In this example, he has burst into space between Derby players in order to keep possession of the ball and is laying it off wide again. This forward momentum helps keep up the intensity of the United attack. 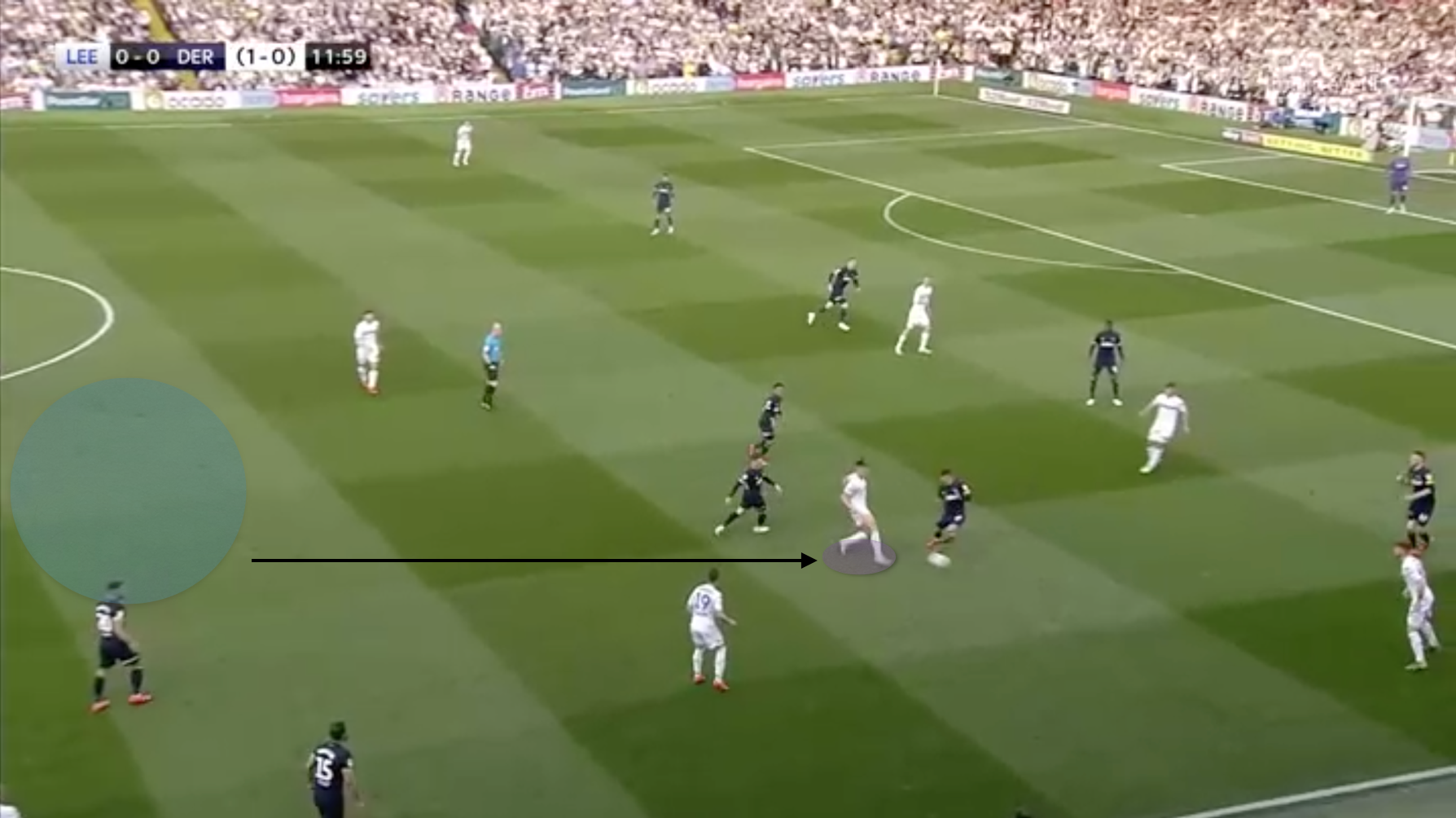 While Phillips’ contributions further up the pitch are important, his main role in possession is in the deeper-lying role. This is something that can be seen in his passing stats. With 58.5 passes per game, he is Leeds’ third-highest passer. On top of this, Phillips has a pass success rate of 82.1% – an impressive ratio considering the high amount of passes and long balls he plays.

In comparison, he makes relatively few key passes per match at 0.6. This shows how his contributions in possession are in a deeper role. He also plays the third-highest number of long balls per game with 4.6. This shows his importance in helping spread the play, as discussed above.

As the deepest of the midfielders sitting in front of the defence, Phillips’ role out of possession is protection based. In many ways, this role sees him act as a traditional holding midfielder. Below, he can be seen sweeping up a long ball from Derby in his zone which he so frequently occupies. 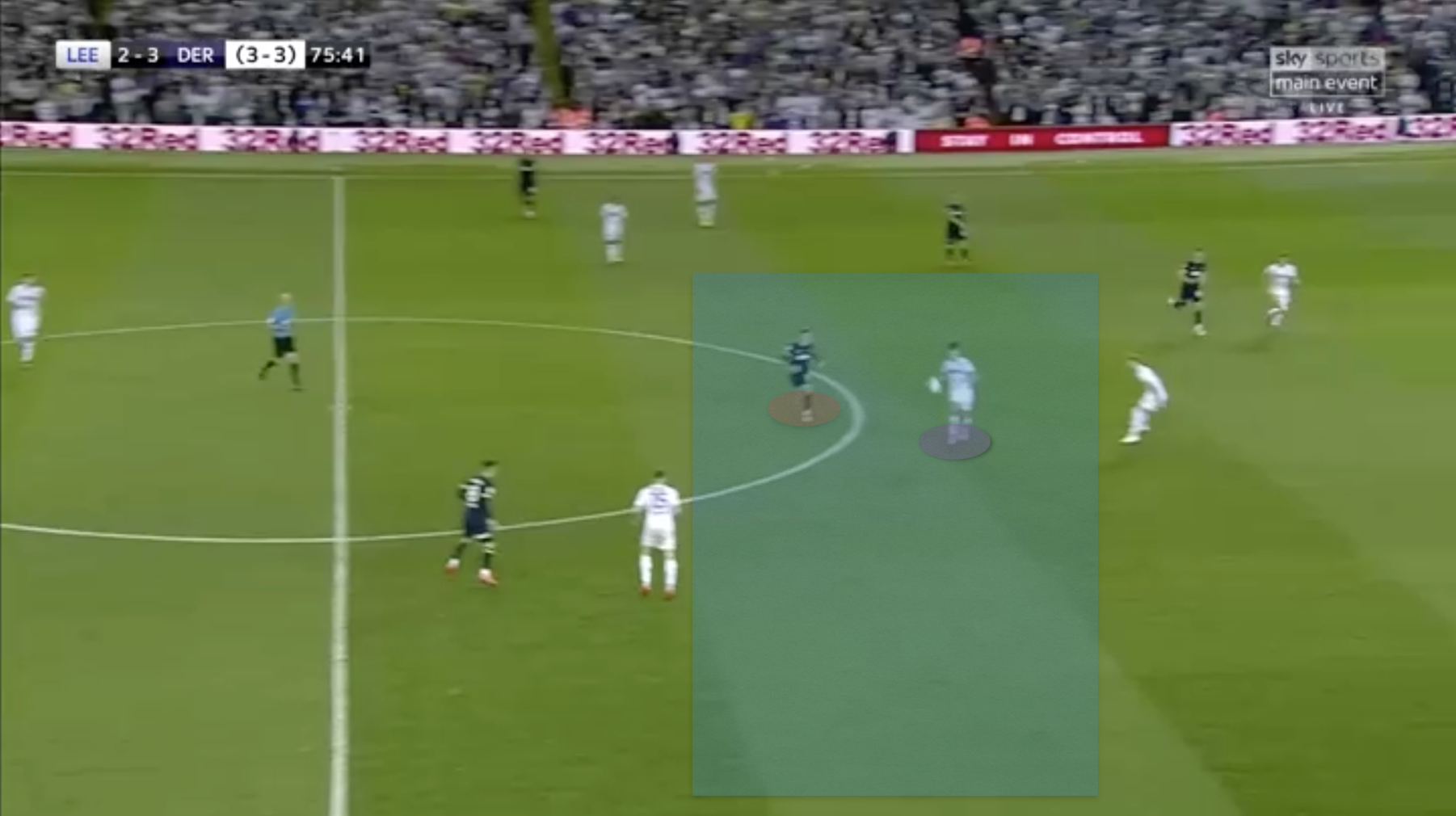 This is, of course, his primary role in defence. Importantly, he is also adept at covering for his central defenders. Due to the high-intensity nature of Bielsa’s side, the centre-backs are often required to step up to aggressively to press and hassle their man. This leaves a gap that can be exploited.

In these situations, it is vital that Phillips has the awareness to spot the danger and cover it. In the following image, we can see an example of this. Liam Cooper (in red) has stepped up to press his man. This has left space in behind, which Phillips has covered and consequently made an important interception. 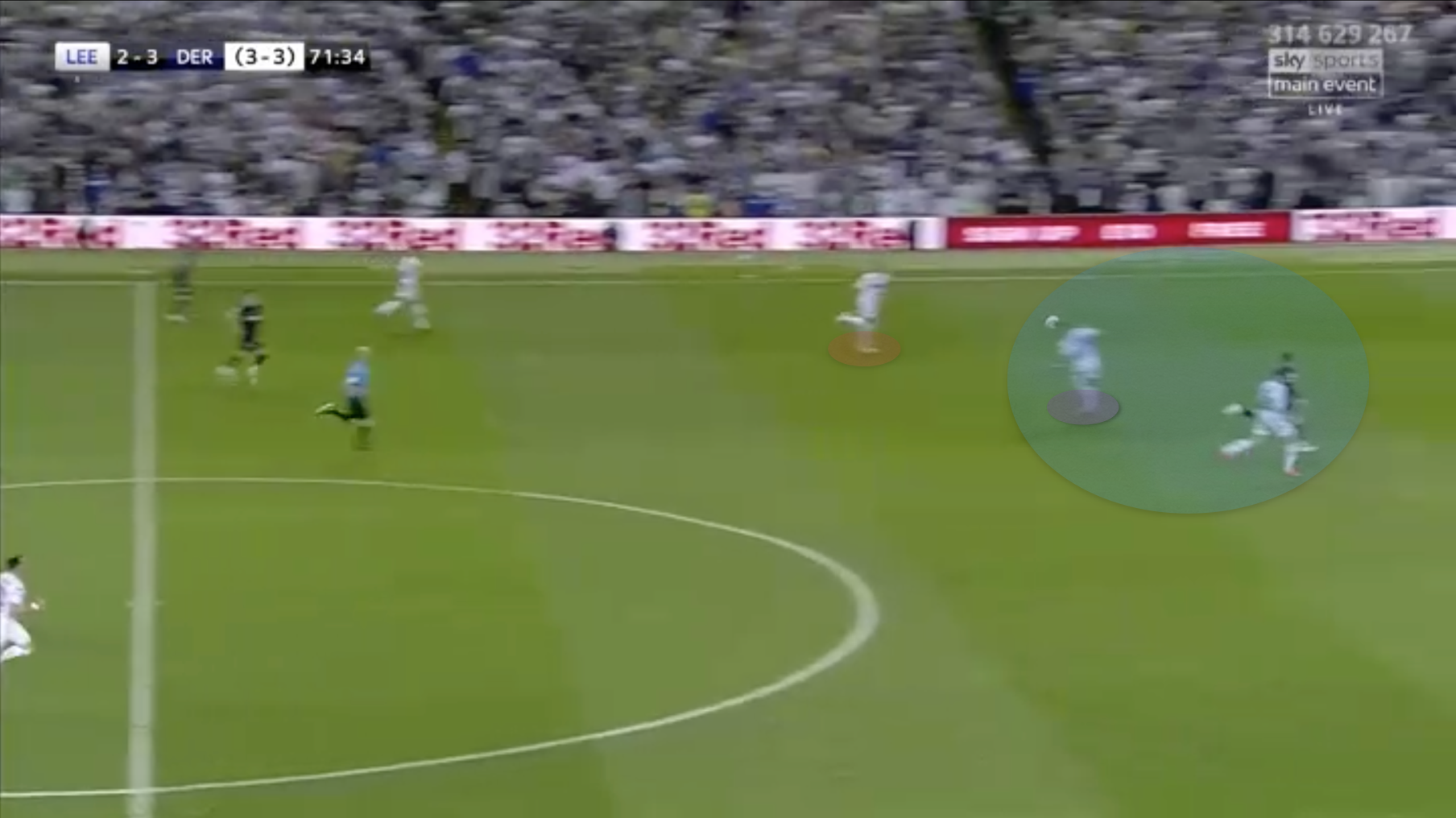 As previously mentioned, Bielsa’s side play with high intensity. This means that players are often stepping up out of position to press. While Phillips is a defensive midfielder and does a lot of covering, he is not exempt from this task. In this picture below, we can see how he has identified an opportunity to step out and hit the opposition player with a tackle. This stops the attack from progressing. 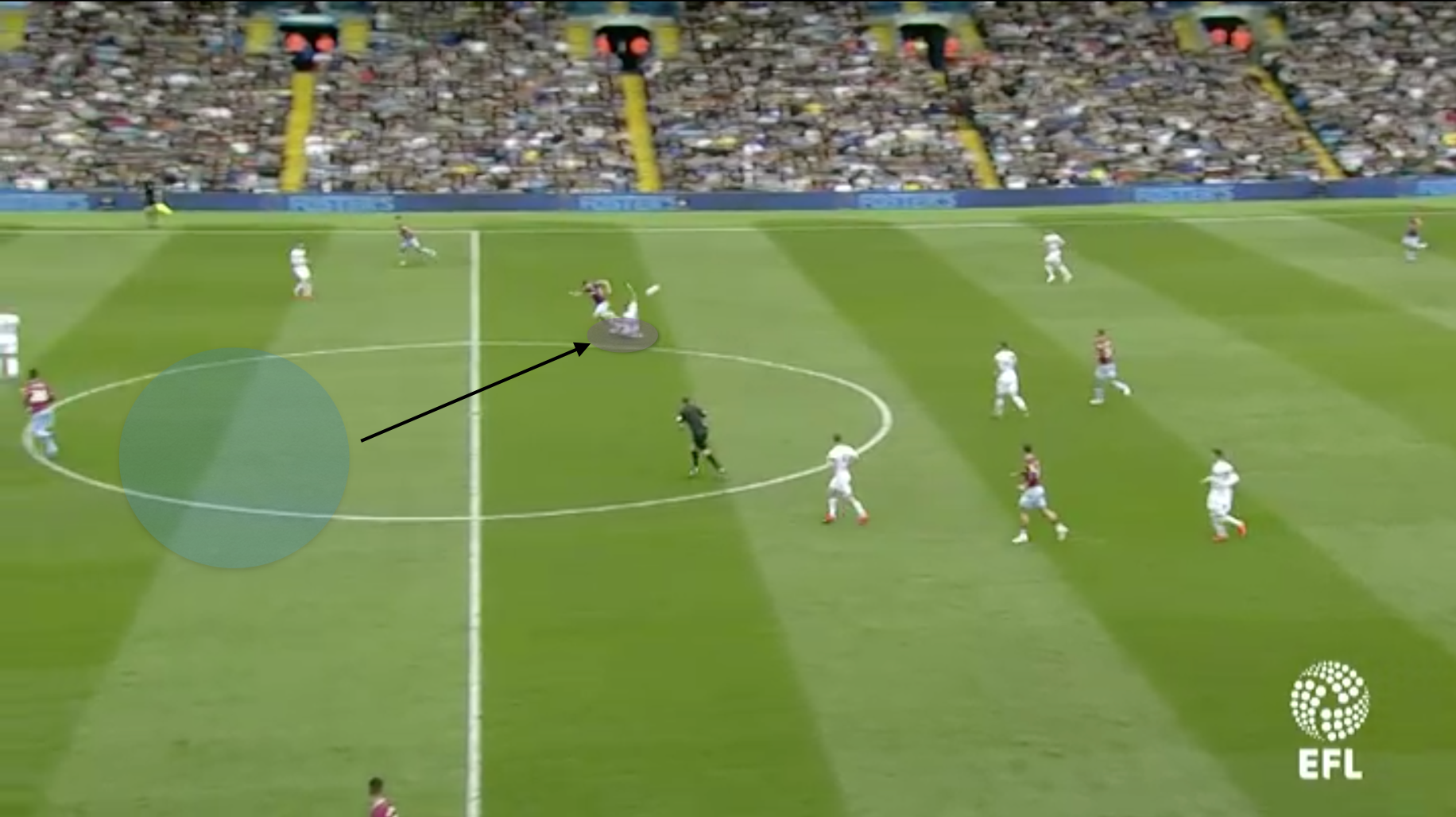 Phillips’ willingness and bravery to step out when needed is an important skill. Under Bielsa, Leeds commit a lot of players forward in attack, which can leave them open to a counter attack. Shutting this off at the source – ‘counter pressing’ – is highly important.

In the following example, we can see Phillips doing just this. Pablo Hernandez has been dispossessed on the edge of the opposition area, leaving United open to a counter attack. Phillips, however, puts a stop to this by dashing forward and putting in a crunching tackle. Not only does this halt the counter, but it also helps keep up the intensity of the Leeds attack by helping them regain possession. 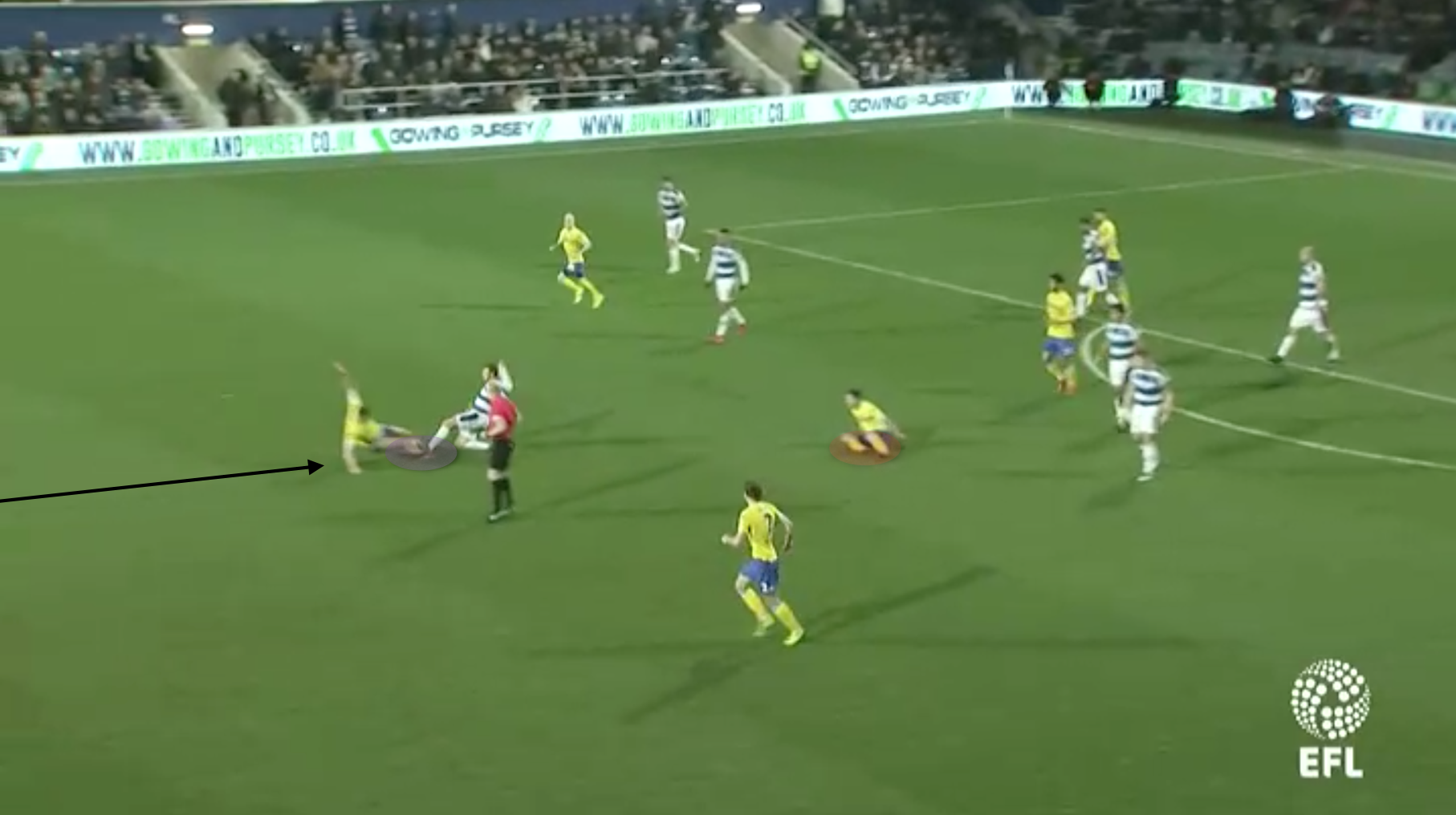 This aggression in Phillips’ defending can be seen in the stats. While he has high totals of 2.6 clearances and 1.3 interceptions per game, he makes the most tackles per game in this Leeds side with 2.6. This demonstrates his commitment and ability in coming out to press and harry the opposition. Indeed, his aggressive style can also be seen in the full-blooded nature of his tackles. He is certainly not one to shy away from a crunching challenge.

Kalvin Phillips is an archetypal fan’s favourite. He was born in Leeds and is a product of the academy. He is full of energy and desire and plays with a kind of passion that all fans love to see. Then there is the full-blooded nature in which he commits himself on the pitch, flying into crunching tackles and hunting down opponents.

But to just view Phillips as a hardworking and committed runner in midfield would be to underestimate him completely. As we have seen, plays a vital role in the build-up of possession, acting as the crucial pivot point between defence and midfield.

He displays clear game intelligence in doing this, game intelligence which he also applies to his defensive work. This can be seen in his covering of space, as well as in his ability to sniff out danger and close it down quickly higher up the pitch.

He is a highly important part of this exciting Leeds United side under Marcelo Bielsa. With his contract up this summer and Aston Villa rumoured to be interested, United will be desperate to keep hold of their 23-year-old midfield engine.