Last season Leeds United and Norwich City both finished on 60 points in the EFL Championship. That tally saw them end the campaign in 13th and 14th respectively. This term has seen a dramatic upturn in the fortunes of each club, who now find themselves level on points at the summit of the table. Their encounter back in August resulted in a 0-3 victory for Leeds, but this time Daniel Farke was out for revenge against Marcelo Bielsa.

The German coach produced a masterclass in game management to seal all three points at Elland Road on Saturday, putting them top on goal difference. This tactical analysis will dissect the Canaries’ convincing 3-1 win over their promotion rivals.

Leeds set up in a 4-1-4-1 shape, while Norwich lined up in their usual 4-2-3-1 formation. The away side were without defender Timm Klose and midfielder Moritz Leitner. Meanwhile, Bielsa decided to select Pontus Jansson and Tyler Roberts in place of Kalvin Phillips and Jack Clarke.

Adam Forshaw was tasked with playing the pivot role for the home team. Dynamic wide-man Esgjan Alioski was deployed as an attacking full-back, looking to overlap the inverted Pablo Hernandez at every opportunity. Tyler Roberts and Mateusz Klich’s roles were to find space behind Norwich’s midfield press.

For the away team, top scorer Teemu Pukki was supported by the fluid trio of Onel Hernandez, Marco Stiepermann and Emiliano Buendia. Exciting young full-backs Jamal Lewis and Max Aarons were once again chosen from the start.

Battle of the press

Both coaches prefer a proactive approach to defending, typically deploying a high press in search of turnovers in the final third. Many wondered if Farke would be more conservative away from home against the league leaders. However, his bravery and confidence in his young squad was evident from the off.

With Bielsa also choosing to press from the beginning of the game, the early stages were quite chaotic. The build-up phase in each team’s plan was predictably difficult to implement under these conditions. Both teams were often forced into playing long passes towards the striker in the hope of a winning second balls on the other side of the midfield.

The images below show each side’s difficulties in constructing sustainable attacks. Leeds’ attacking trio close off Tim Krul’s passing options with a mix of angled man-orientated pressure, as well as cover shadows. 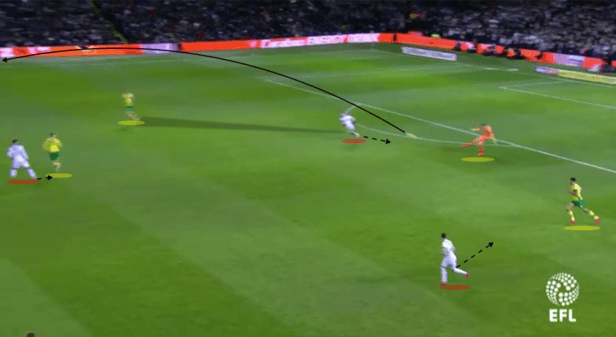 Norwich were quick to apply pressure in moments where they sensed an opportunity to force a mistake or a long ball. In the instance below, Forshaw lays it back to former Real Madrid man Kiko Casilla in goal. The Spaniard’s short passing options were shut off by the pressing of Norwich’s front three, forcing him into a long ball. 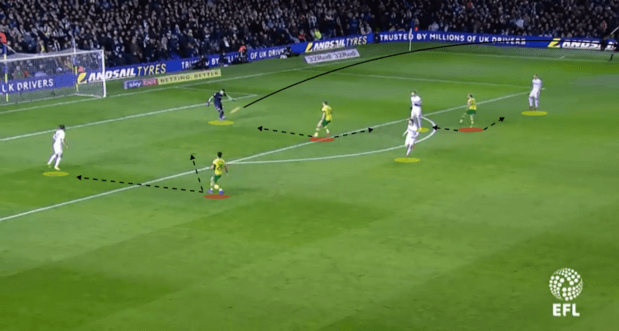 As is invariably the case, the pressing from both sides led to space opening up behind their lines of pressure. The Norwich midfield were aggressive in their attempts to win back possession against Leed’s build up. With their back four struggling to match this progression, space often opened up between the two units. Leeds failed to capitalise in any significant way, but Roberts and Klich did find themselves with central space to drive at the Norwich back four.

This by-product of pressing was mirrored on the other side. Leeds also conceded space between their lines during moments of intense pressing, and Norwich consistently found themselves open in the 10 space. The defensive approach from both sides also enjoyed lots of success, however, with the Canaries in particular profiting from some well-executed pressure.

The first image below highlights the space that opened up for Leeds on the occasions when they managed to bypass the press. Roberts failed to take the opportunity, however, and his pass to the winger was too short. Harrison was forced to move towards the ball, where he was eventually crowded out by Norwich defenders. The second image shows what happened when Norwich were successful with their pressure. 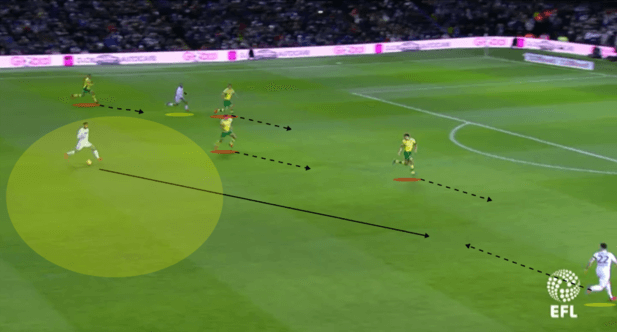 Following a turnover deep in their own half, Leeds centre-back Pontus Jansson attempted to carry the ball into midfield rather than looking for an out ball to one of the full-backs. The Norwich midfield applied pressure, resulting in another turnover. The ball falls into space for Hernandez, who is brought down by Jansson in his attempts to make amends. The resulting free-kick saw Norwich take the lead through Vrancic. 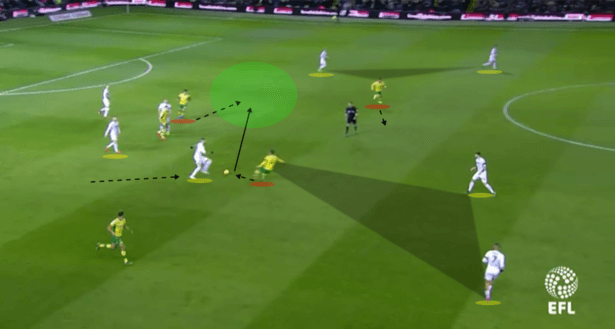 Norwich were far more effective with their pressing, forcing mistakes from Bielsa’s men during their build-up phase. They also managed to measure their pressing, applying it at the right time and reverting to a mid-press at times.

Leeds struggled to cope with the intensity, failing to create enough quality chances. Across the 90 minutes, just six of their 21 shots were on target, with an expected goals tally of 1.09. Norwich, meanwhile, scored three despite having an xG of just 0.77.

One of the most prominent features of Bielsa’s Leeds is their exploitation of the wide areas. Quick, fluid combinations between the inside forward, the attacking midfielder, and the full-back have been a core pattern in their play this season.

Another way in which they look to create chances from the wings is by building the play on one side before switching it to an isolated winger on the far side in a one-on-one scenario. Additionally, they often look to feed directly into the channels from deep with long passes into the inside forwards who drift wider to receive on these occasions.

Norwich were clearly well prepared to cope with their opponent’s threat from out wide. Jack Harrison was generally chosen as the Leeds winger to try and exploit the isolated situations, but was a frustrated figure before being taken off for Clarke in the second half.

The first image below shows the 22-year-old in a one-on-one scenario against Jamal Lewis. With space to progress on the outside, Harrison could have used his pace to bypass the full-back and deliver to his teammates arriving in the box. 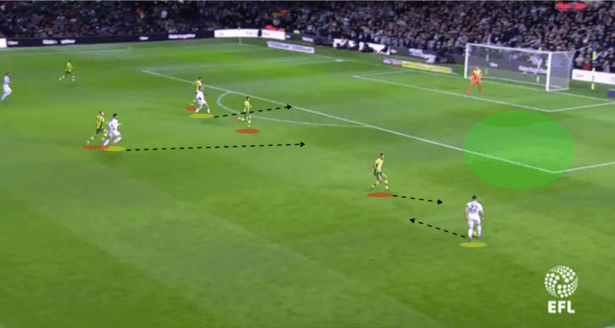 Instead, he hesitates for too long. His indecisiveness allows Lewis to position himself well and force the winger inside, where a second defender has arrived to cover. On the few occasions Norwich allowed these types of switches to occur, Harrison was unable to capitalise on the night. 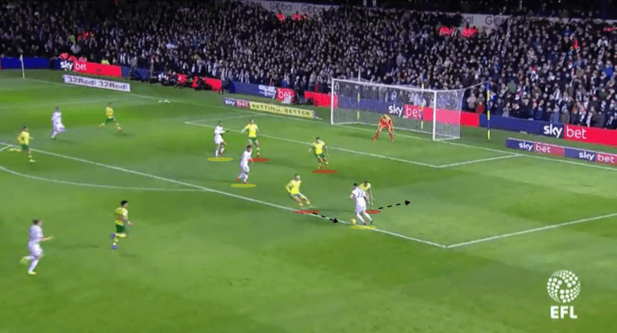 Leeds also looked to execute their combinations on both wings to create openings for crosses into the box. However, their opponents were well prepared to stifle these efforts. The trio on either side often outnumber their opponents, or at the very least create a free man through clever rotations. Against Norwich, though, they were consistently met with four defending players, who blocked out the space and forced turnovers with relative ease. 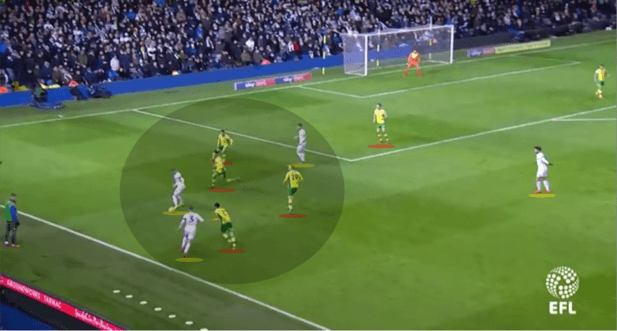 A combination of well-organised defending from Norwich and poor execution from Leeds saw the home team enjoy little success down the flanks. Normally highly effective in one-on-ones, young substitute Jack Clarke didn’t fare much better than Harrison in the second half.

After a high intensity first half, Norwich had a two-goal lead to protect. Leeds, on the other hand, were starting to show signs of exhaustion, but with nothing to show for their efforts. The second half seemed set up for a comeback from Bielsa’s men, but it was clear early on that Leeds were struggling to find the energy to break down their opposition.

Daniel Farke made the wise choice of tapering his defensive approach, rather than changing it entirely. Norwich formed a deeper unit, applying pressure only at the right moments. When Leeds moved the ball horizontally in search of openings down the channels, their opponents were ready to apply pressure to force them backwards or into a mistake. Furthermore, the home side were too slow with their switches of play, allowing Norwich to close out the space every time.

The first image below highlights the defensive organisation of Norwich as they look to manage their lead. The pace of the game had dropped off dramatically by this point, after such a high-tempo first half. This game state suited Norwich far more, with compaction and controlled pressure the order from Farke. The two attackers in the box are well marshaled by four players in yellow, while the wide players are outnumbered three to two. 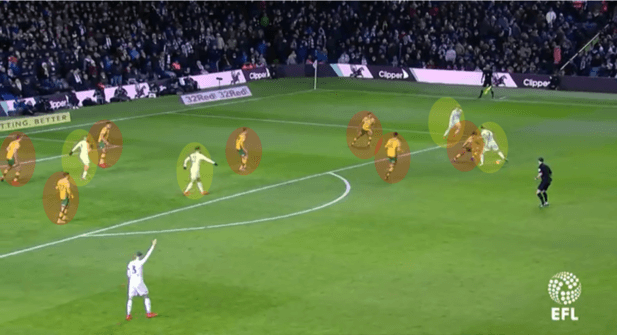 As the second half began to drift, Leeds’ tired efforts to stretch their rival’s back line by moving the ball from one flank to the other proved relatively fruitless. The Norwich defence of Aarons, Zimmerman, Godfrey and Lewis held strong with Leeds enjoying 61% of the possession. The Canaries forced their hosts into progressing almost exclusively via the wide channels, before moving across as a unit to shut off the space or cope with deliveries into the box.

The final nail in Leed’s coffin came in the 78th minute, and it was a perfect representation of Farke’s successful game plan. During another slow and dejected attempt to build the play, Barry Douglas receives in the six space with his back to the play. He fails to scan the space behind him and instead of turning into the space, he takes a sloppy touch to the side.

Teemu Pukki is ready to profit from the mistake and immediately applies pressure before completing the turnover. After shifting the ball out wide, Norwich cross for Vrancic to fire home his second and clinch the win. 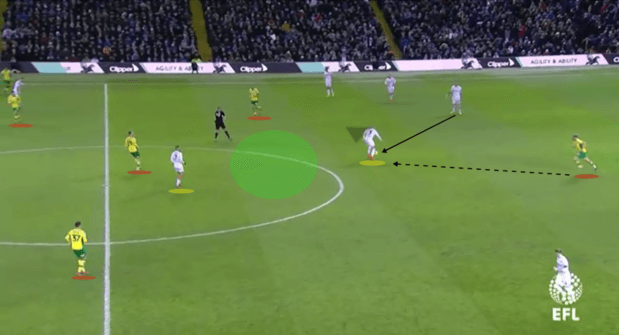 Even late in the first half Leeds were showing signs of fatigue, and were often slow and disjointed in their build-up play. The second goal, as with the other two, came after tired play in Leeds’ first phase of the attack.

Having received in the pivot role, Forshaw was exceptionally slow in his attempt to progress the ball, inciting pressure from the Norwich attack. He stalls on the ball and is dispossessed by Buendia before Norwich work the ball into space and eventually score through an open-goal finish from Pukki. Notice the space (in green) Forshaw could have moved into, or the teammate at the bottom of the picture open for a pass. 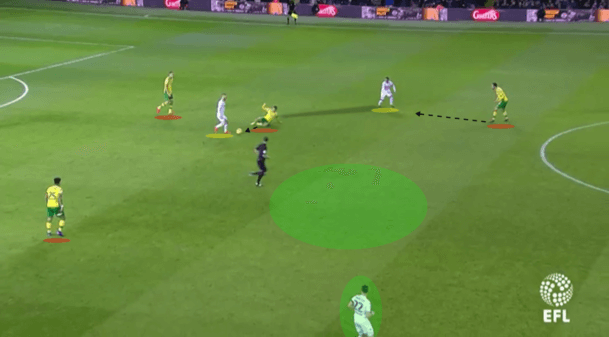 This type of scenario occurred far too often from Leeds’ point of view. On the other hand, the pressure applied by Norwich at key moments in the game was well-timed and well-executed.

Substitute striker Patrick Bamford managed to score a late consolation with a header from a corner. The Norwich defence however deserves praise for their application of Daniel Farke’s excellent game plan. This is especially so given their relatively poor record so far this season of conceding 39 in 30 games, the highest amount in the top eight.

Such an important encounter at the top of the table was bound to bring excitement. Both teams were positive from the off, resulting in a scintillating first half. Norwich took their chances, however, and defended their lead with a combination of compact defending and controlled pressure.

Leeds were left too exhausted to build anything substantial, and their tired attempts allowed the away side to finish them off with turnovers in the final third. With the teams level on points going into the final months of the season, the race for the Championship title is sure to be an exciting affair. Perhaps, as was the case in this fixture, the side who manages their intensity best will come out on top.