João Mário 2022/23: How the converted right-back has made the position his own at Porto – scout report

22-year-old João Mário Neto Lopes known as “João Mário” is the latest player to establish himself within the first team after coming up through FC Porto’s academy.

Having left hometown club A.D. Sanjoanense to join the Portuguese champions at the age of nine. João Mário has represented his club and country at every level and is now being tipped to be called up to Portugal’s senior squad.

He made his debut for Porto in 2020 and even though he was kept as part of the first-team squad from that point, it was last season when he enjoyed his breakthrough. After being trained to develop himself in a new position, João Mário was one of the success stories as the club regained the Primeira Liga title.

In this scout report, we will provide a tactical and statistical analysis which focuses on the attacking and defensive phases of João Mário’s game.

João Mário started his career playing as a winger. Naturally, he started as a right winger as he is right-footed, but he has operated on the left-hand side also, acting as a winger who comes inside and attacks the half-space However, since he joined the club’s first team Sérgio Conceição has converted Mário into a full-back and since last season he has now established himself as the first choice right back and one of the success stories in Porto’s title win.

As you can from the heat map below João Mário looks to provide width as he maintains his position in the right channel throughout Porto’s possession. The role he plays within the team is fundamental to how Conceição uses tactics and his overall approach. 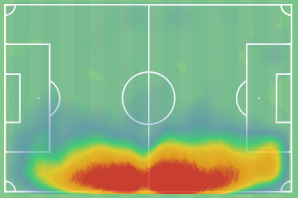 Sérgio Conceição has implemented a philosophy that is built on intensity, aggressiveness, and organisation. Conceição lines Porto up in a 4-4-2 or 4-2-3-1 formation. He sets his wingers to cut inside and his fullbacks to overlap and join the attacking line. As his teams look to overload their opponents during attacking transitions, this is when João Mário will join Porto’s attacking line and provide an outlet out wide.

Defensively, Conceição sets Porto to keep a solid defence that relies on an intense man-orientated pressing system. They generally keep a compact shape and aim to prevent the opposition from playing through the centre of the pitch, this forces the opposition to play through the wide areas. This is where João Mário’s traits as a winger assist with the team’s defensive strategy as his ability to quickly engage the play out wide helps the team win the ball back in the areas they strive to.

When providing data analysis on fullbacks, it’s important to assess both their defensive and offensive capabilities. With João Mário changing from a winger to a full-back but also playing for Portugal’s number one club, we have compiled several data visualizations that provide a clear outlook of both what he is good at and where he needs to improve to continue with the progress already made.

As the full-back position is part of the defensive line it’s conceivable that most defenders will always complete a higher number of defensive actions than attacking actions. The position they take up on the pitch puts them in situations to perform more defensive actions.

As expected, you can see how João Mário rates higher for successful attacking actions per 90 mins when compared to how he rates for defensive actions over 90 minutes. The Portuguese under 21 international averages 5.38 successful actions per 90 minutes, which was the highest amount for a right back in the Primeira Liga last season.  However, when compared to the rest of the league he performed below average for the number of successful defensive actions he made, averaging just 7.97. 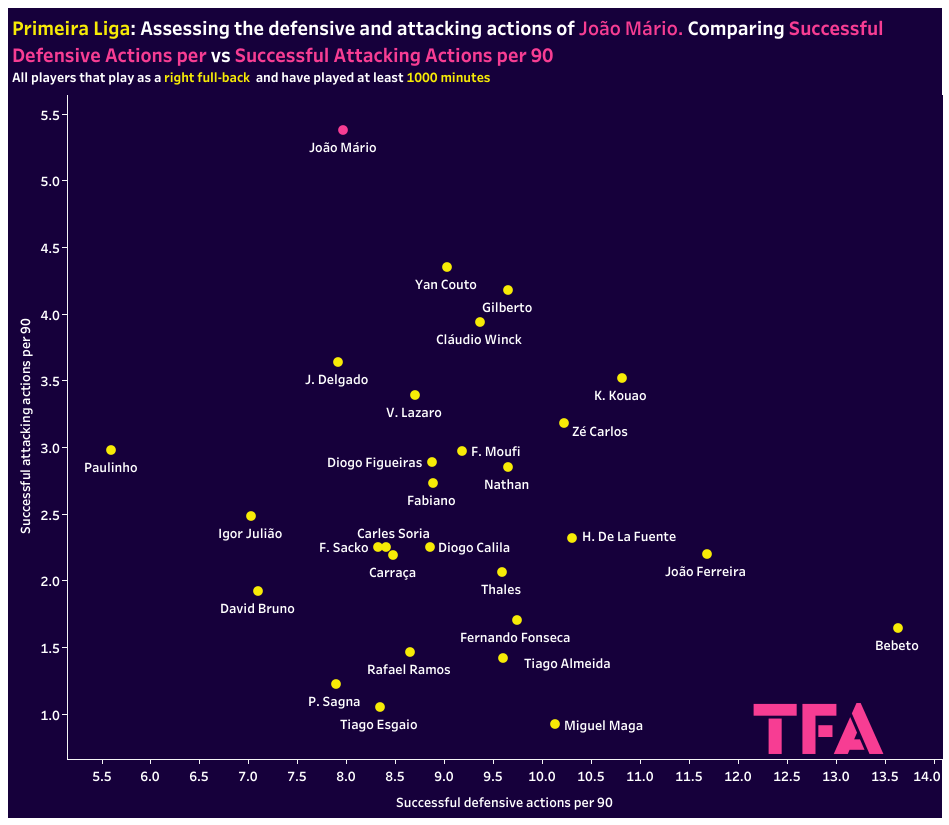 The data above shows that João Mário is an attack-minded full-back, who has vulnerabilities when it comes to defending. This would be natural for a player of his age who has recently been developed into a fullback.

When analysing a player’s data, you must put it into context before confirming what the player is good and bad at. For example, João Mário plays for FC Porto. Last season, Porto averaged 60% ball possession, which was the highest in the league, therefore Porto’s players spent less time defending against the ball than any other player. However, this doesn’t mean that João Mário’s lesser defensive stats are a direct result of Porto defending less.

With the data below, whilst assessing the possible defensive frailties that João Mário still needs to develop, we used possession adjusted, so we can calculate his defensive statistics to take Porto’s higher possession value into account. 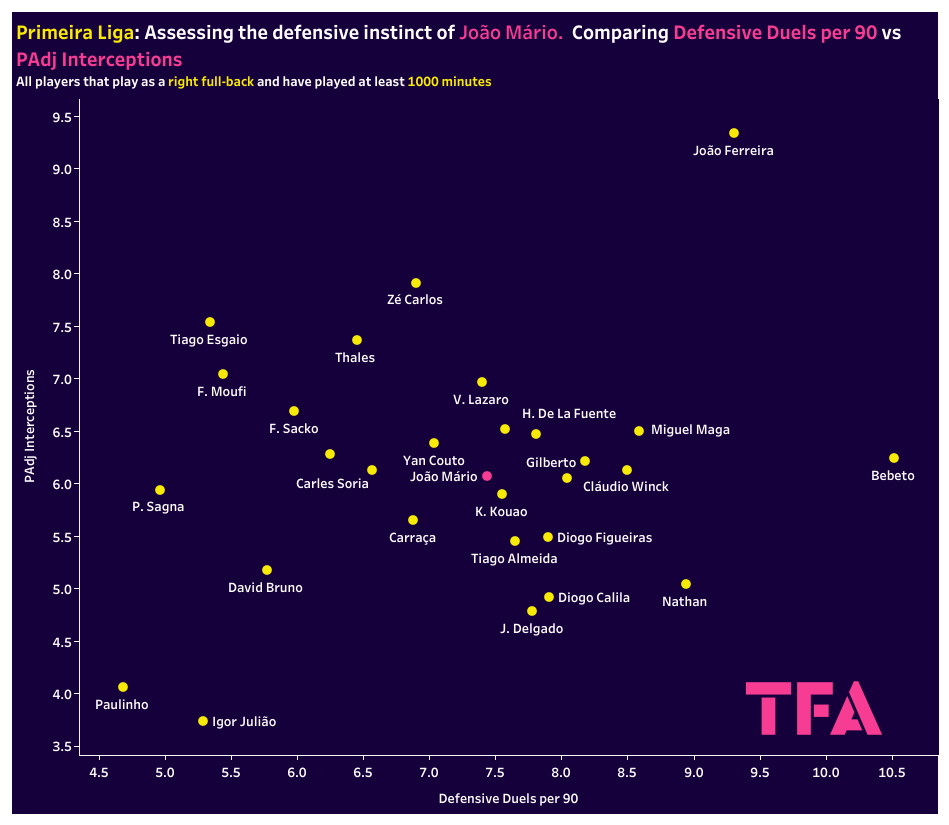 The reason we chose to measure these two statistics was because of the defensive approach taken by Porto under Sérgio Conceição’s guidance. Because they tend to force the opposition to play out wide, the fullbacks are required to press the opponent immediately and either win the ball by intercepting it or by winning a defensive duel.

These two examples below show João Mário defending 1v1 in the wide areas. His ability to quickly close the space gives him the advantage as the ball carrier cannot position himself to be able to attack the space vacated by Mário as he presses. 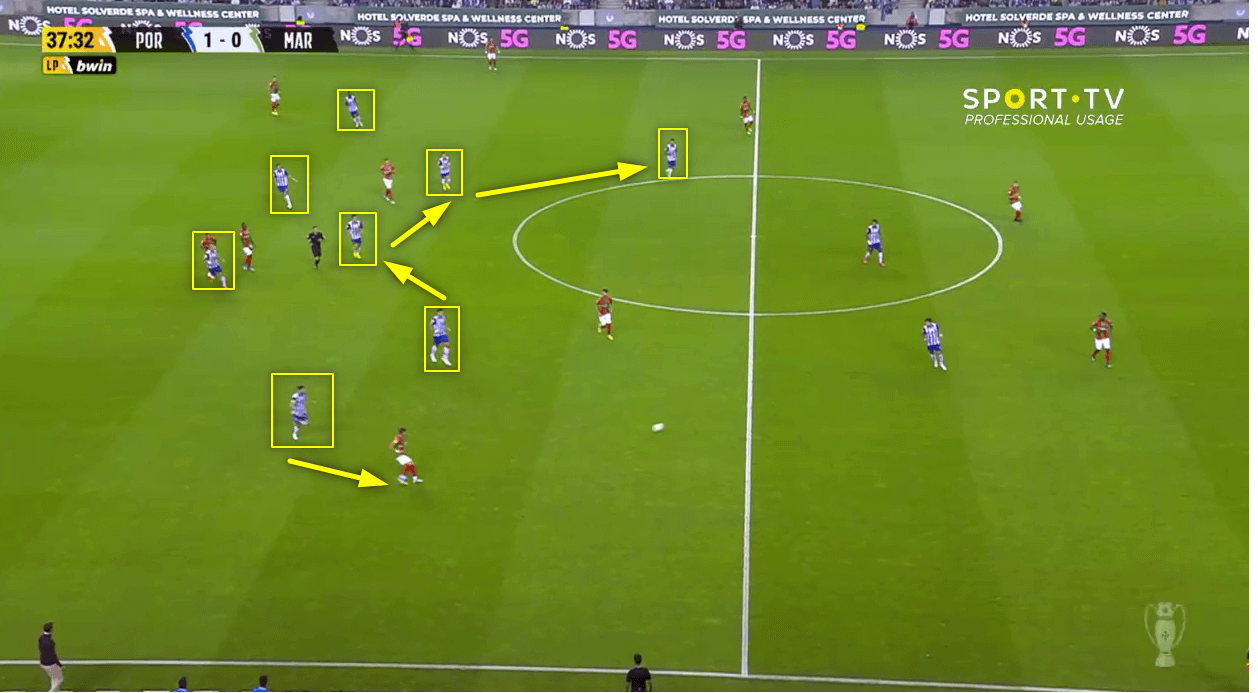 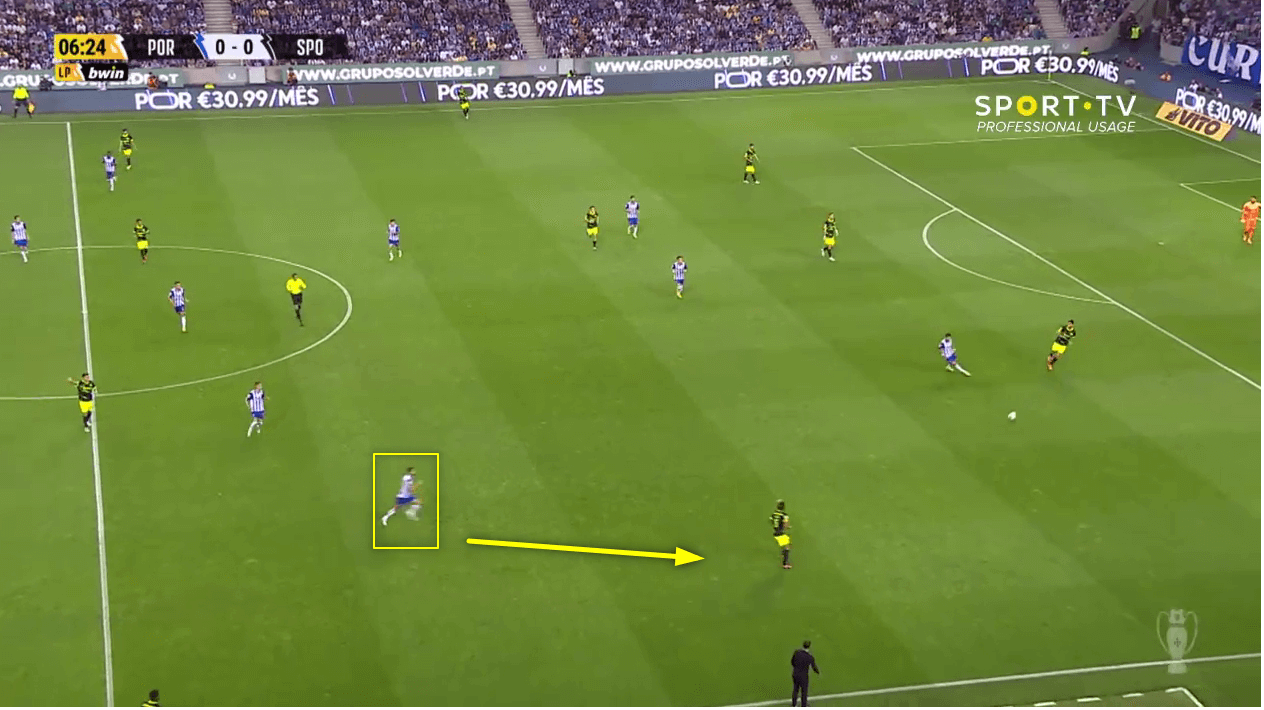 You can see how he leaves his defensive line in both passages of play. Although he doesn’t intercept the ball or win his defensive duel, he is successful as he stops both wide players from being able to progress the play out wide and forces them to keep the ball in their defensive third.

Conceição puts a lot of emphasis on his fullbacks when Porto looks to attack. As Porto has possession of the ball on average for 60% of the game, the fullbacks play an important role in the team’s attacking phase of play. This will be the main reason why João Mário was converted into a right full-back, so the team now has a player with a natural attacking instinct to play in the full-back area. 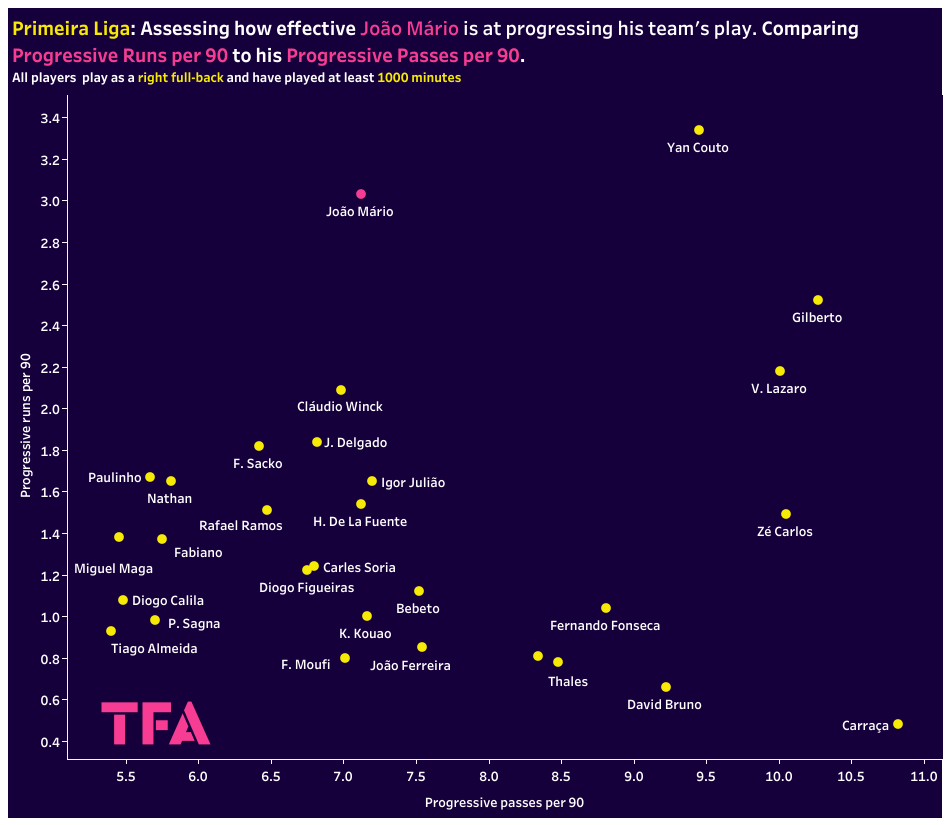 Being a progressive ball carrier can help when you play against teams defending in a low block. Whether it be high up the pitch or during the build-up phase it can stretch the opposition and pull them out of their defensive shape.

A progressive pass is a forward pass that is 30m long when the pass starts in the team’s half or at least 10m in length in the opponent’s half. Even though João Mário was highly ranked against the other right-sided full-backs in Primeira Liga, he does show good vision and good distribution to be able to create with his passing.

Attacking players are largely judged on their ability to score goals or win points for their teams. As João Mário is an attacking full-back his most productive output is likely to come in the form of chances created, assists and his creation from the wide areas.

The two data visualisations below show his smart passing against his key passing, both measured over 90 minutes and his assist vs his expected assists.

His assist record shows how many times he played the last pass before Porto scored a goal. He performed well with both metrics when compared to other right-backs and while he only finished the season on two assists, the data below shows his expected assists was 3.7, which was the highest for the right-backs in Portugal last season. 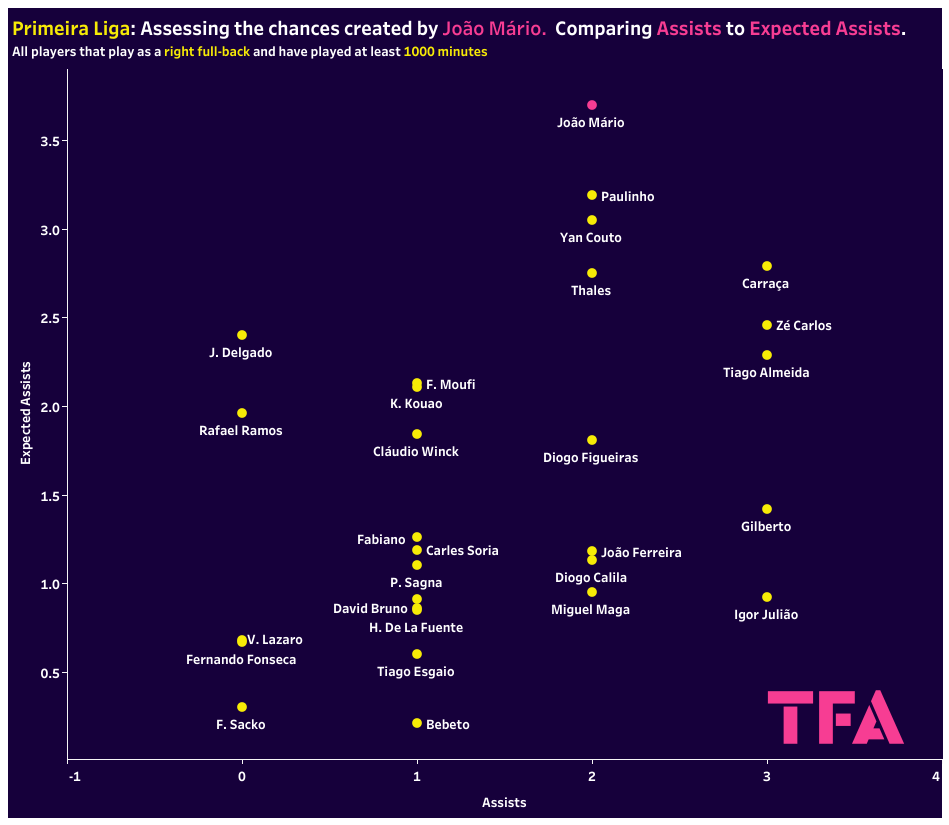 Both the assist and expected assist metrics need to be assessed with the right context when reviewing a player’s creativity. Both these metrics are reliant on the actions of the player’s teammates and are not necessarily reflective of the quality of the player, in this case, João Mário. If the player you pass to doesn’t shoot, you don’t get a chance to create, and if a player doesn’t score, you won’t get an assist. You must keep in mind that it works the other way too, if a player achieves multiple assists within a season, it doesn’t necessarily make him creative as the assist could just be a simple pass.

It’s important when assessing a player’s creativity that smart passes and key passes are reviewed alongside the number of assists that the player achieves.

A smart pass is a creative and penetrative pass that attempts to break the opposition’s defensive lines and a key pass is a pass that immediately creates a clear goal-scoring opportunity for a teammate. 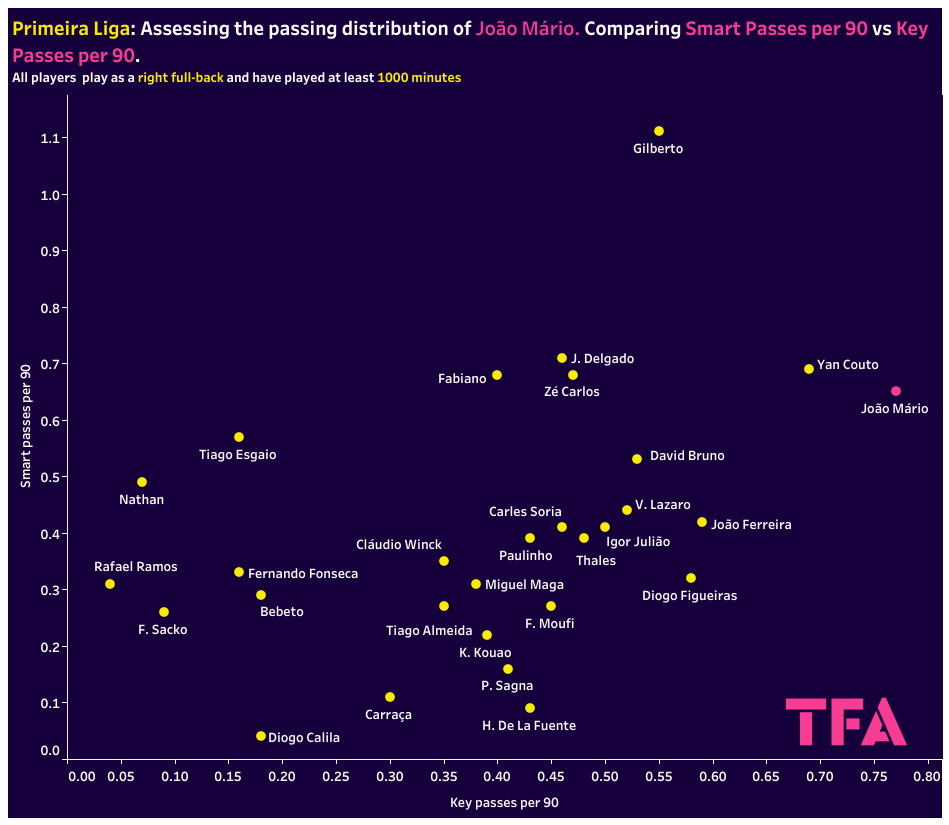 His ability to attack space down the right-hand side is crucial to the tactics that Porto attack with. During this last campaign, a big part of the attacking approach was to build the play down the wide areas and draw the opposition to one side before switching the play to the other side where they have more space to attack and a numerical advantage 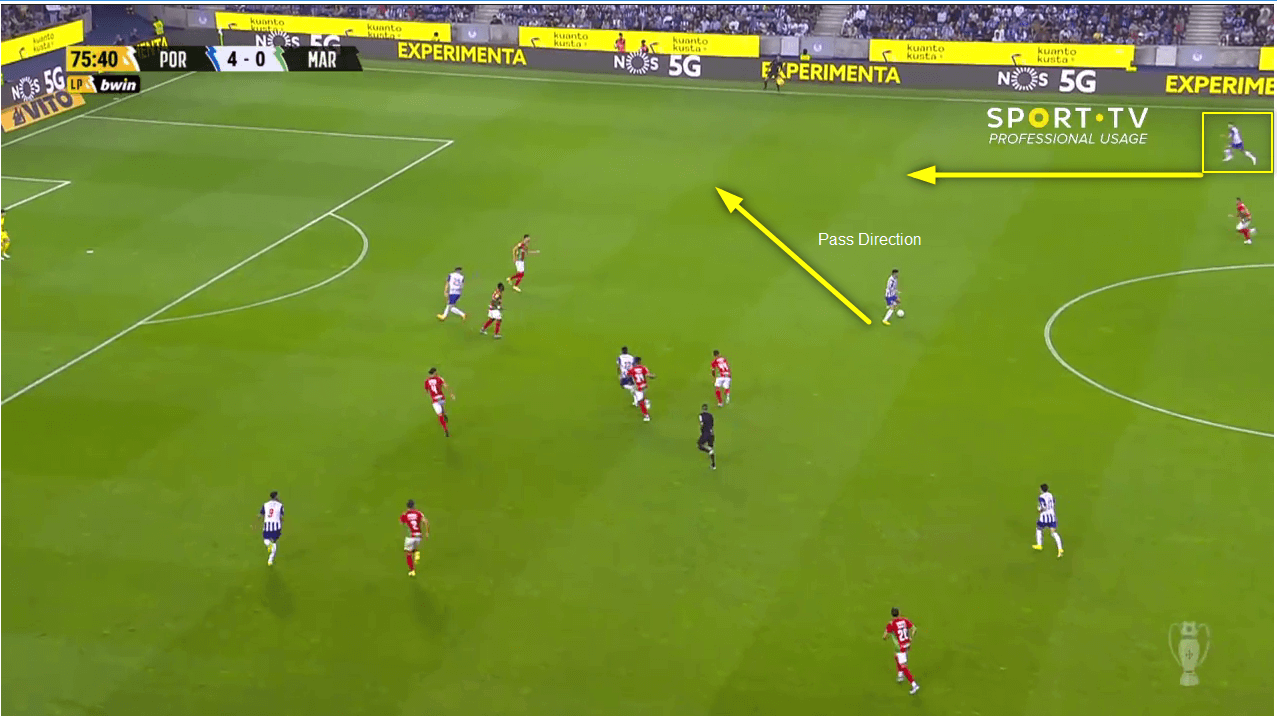 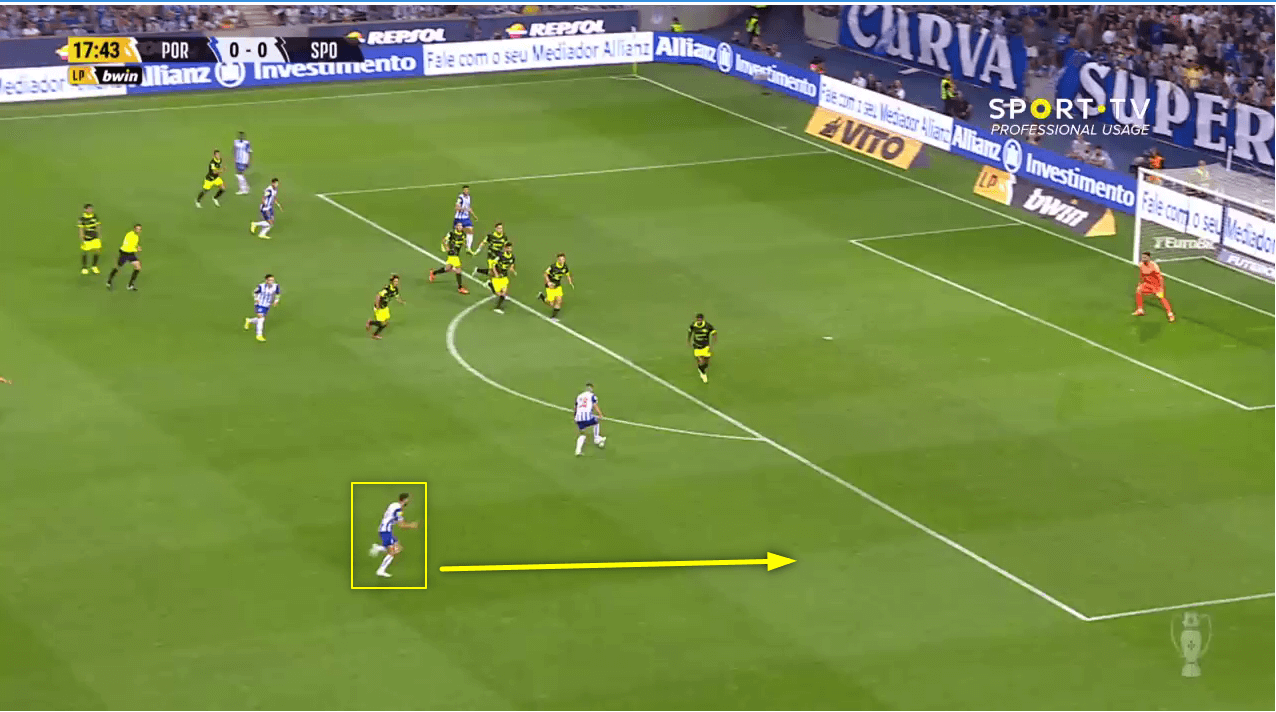 The two images above show João Mário being the player that stretches the opponent and looks to exploit the space created. You can see in both examples how both teams have been pulled towards the left-hand side. That is the advantage of a player with attacking instincts playing as a full-back on that side.

In the future, we believe the full-back position will be where João Mário remains for the rest of his career. His attributes will allow him to play as a wing-back should he play for a team that employs a wing-back formation. At Porto, he plays as a full back that occupies the right flank, provides the width and looks to overlap the play. He could be deployed as an inverted full-back given he can use both feet and also be pushed further forward and played in his old position as a winger.

Both Jordan Lotomba of OGC Nice and Joakim Maehle of Atalanta are current players in Europe’s top-five leagues that are similar to João Mário’s style of play. Like, João Mário, they have been converted into attack-minded fullbacks and they both occupy positions on both sides of the pitch.

Even at this early stage of his first team career, rumours are starting to circulate that João Mário will be the next big money move out of Portugal, although it is still too early in his development for him to leave Portugal. He plays regularly, he plays an integral part in the team’s approach and he is playing Champions League football. There is no need for him to leave at this stage.

He has started this season in good form, he already has 2 assists to his name, and he has completed 1.35 key passes per 90 and completed 4.72 dribbles per 90 with a success rate of 71.43%. And with him notably playing higher up the pitch, there is no reason this form can’t continue.

In this scout report, we provided data analysis and tactical analysis that identify key traits within João Mário’s game. Although the data analysis is focused on last season, we have shown components within his overall game that plays a pivotal role in Sérgio Conceição’s tactical approach.