James Garner is a name that has been on the lips of the majority of Manchester United fans over the past months and weeks. Garner has excelled and progressed through all the ranks of United’s academy starting from the under-8 level. After finding himself down the pecking order in United’s midfield options, and after a short stint on loan at Watford, he joined Nottingham Forest on loan in January 2021 and enjoyed a year and a half at the Championship club.

Garner has been instrumental to the side since joining, helping them avoid relegation last season and then putting in some mighty fine performances this campaign as Forest clinched promotion back to the Premier League for the first time in 23 years.

As the 2022/23 campaign is fast approaching, the 21-year-old has a big pre-season ahead of him. Garner’s ambition is to impress new manager Erik ten Hag and cement a place in United’s midfield rotation.

Midfield has been an obvious area of weakness for the Red Devils for a number of years. With the likes of Paul Pogba and Nemanja Matic departing the club, the team are left short in both numbers and quality in the middle of the park. And while the club will definitely be looking to strengthen this area with new signings in the summer – already linked with Frenkie de Jong from Barcelona – Garner has an opportunity to solve some of the problems from within and serve as a serious option.

“I haven’t had time to think about what I want. I would like to go into pre-season and impress. It’s up to me as a player to impress. I know how Ajax’s style of football is good, so it’s exciting.” stated Garner.

Can Garner demonstrate his quality and value and be included in ten Hag’s plans? Can he handle the pressure that comes with playing for Manchester United? Or will he be sent out on loan again, possibly to a Premier League club?

This tactical analysis and scout report will look at Garner’s key attributes and style of play. The analysis will also compare his stats with some of United’s current midfield options.

He joined the Manchester United Academy at under-8s level. He initially played as a centre-back till the age of 15, before transitioning into midfield.

“I was a centre-back up until the Under-15s, I think it was, and, in one tournament, I was put into midfield and have not looked back since. I’d like to say I’ve got both of those elements in my game – the defensive side and the attacking side, which can only benefit me in that type of position.”

There has been some debate about Garner’s best role in recent years. He played for a few years at the U23 level for Manchester United as the deepest player in midfield – a classic deep-lying playmaker who dictates the game and shields the defence.

At Forest, the team have lined up in a 5-2-3 for the most part of the 2021/22 season with Garner playing as part of the midfield pivot alongside Ryan Yates. Garner assumes the left-sided central midfield role with more license to roam and connect with the front three while Yates serves as the more defensive-minded midfielder. 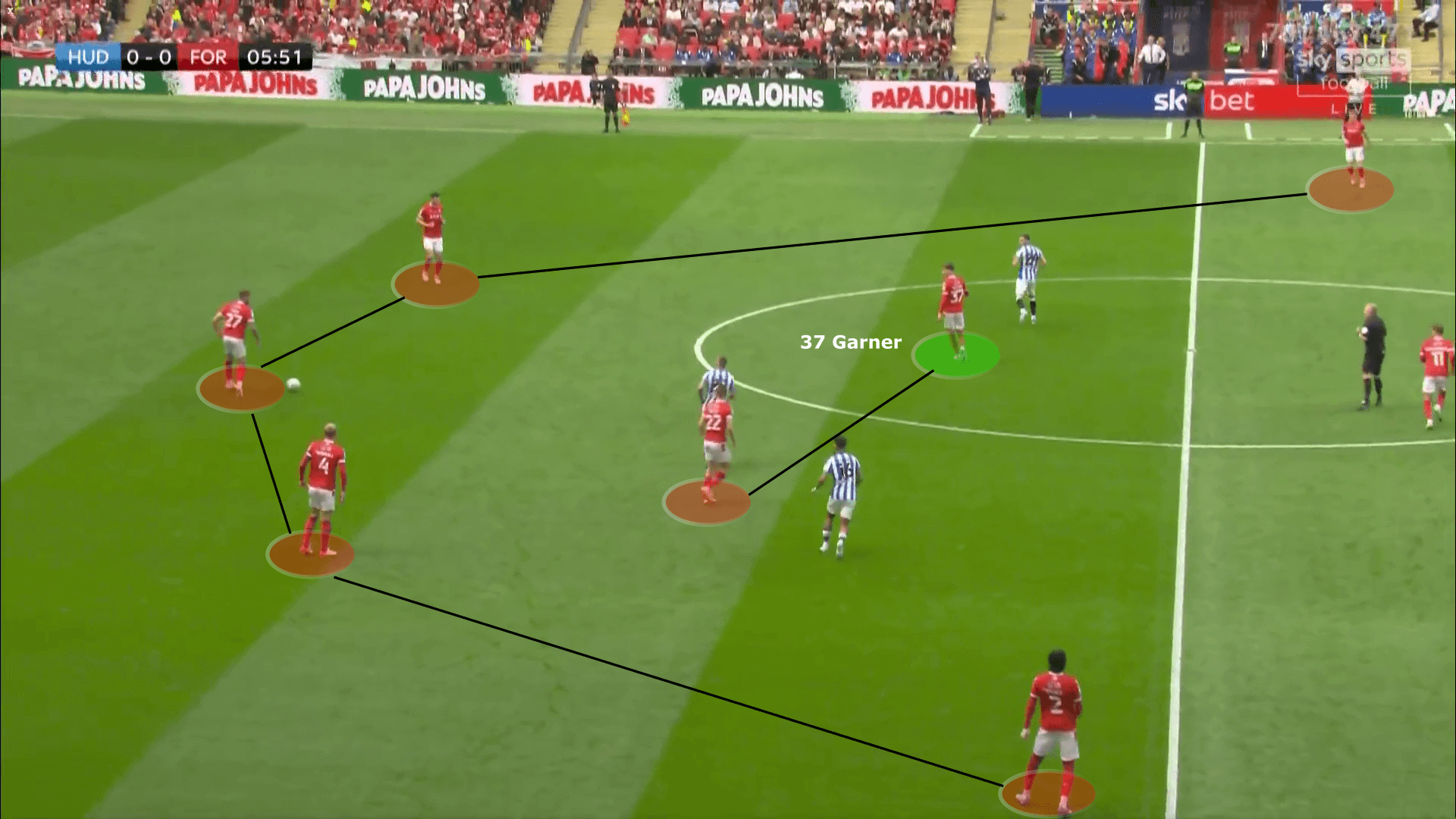 Garner’s heat map showcases how active he is all over the pitch, with dominance from the left side. It also highlights the freedom he is granted to float and cover all areas, whether it’s to create in the final third, apply pressure in the middle or defend and protect his centre-backs. 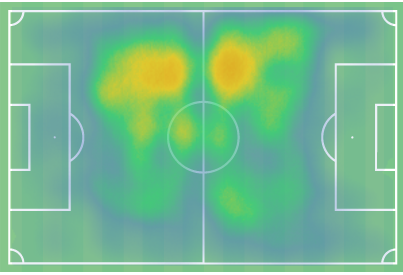 During his years with the United Under-23s, Garner seemed more comfortable in the number 6 position, controlling the game at his own pace and spreading long-diagonals to the wings.

His role at Forest has been more of a box-to-box than a holding midfielder. He participates in the build-up phase in his own half but also likes to receive the balls in small pockets higher up the pitch and link up with the attackers.

Since joining Forest, Garner has been thriving in his role under Steve Cooper. Across the league campaign this season, he averaged 32.4 attempted passes per 90, with an 82.1% pass accuracy. Nearly half of the attempted passes have been played forward, highlighting his directness and reluctance to just play sideways and backwards.

One of his best attributes is being able to carry the ball through the opposition press across long distances, attracting defenders and allowing his teammates to move into space. Here, he bursts from behind the halfway line all the way to the other end and supplies a fine assist. 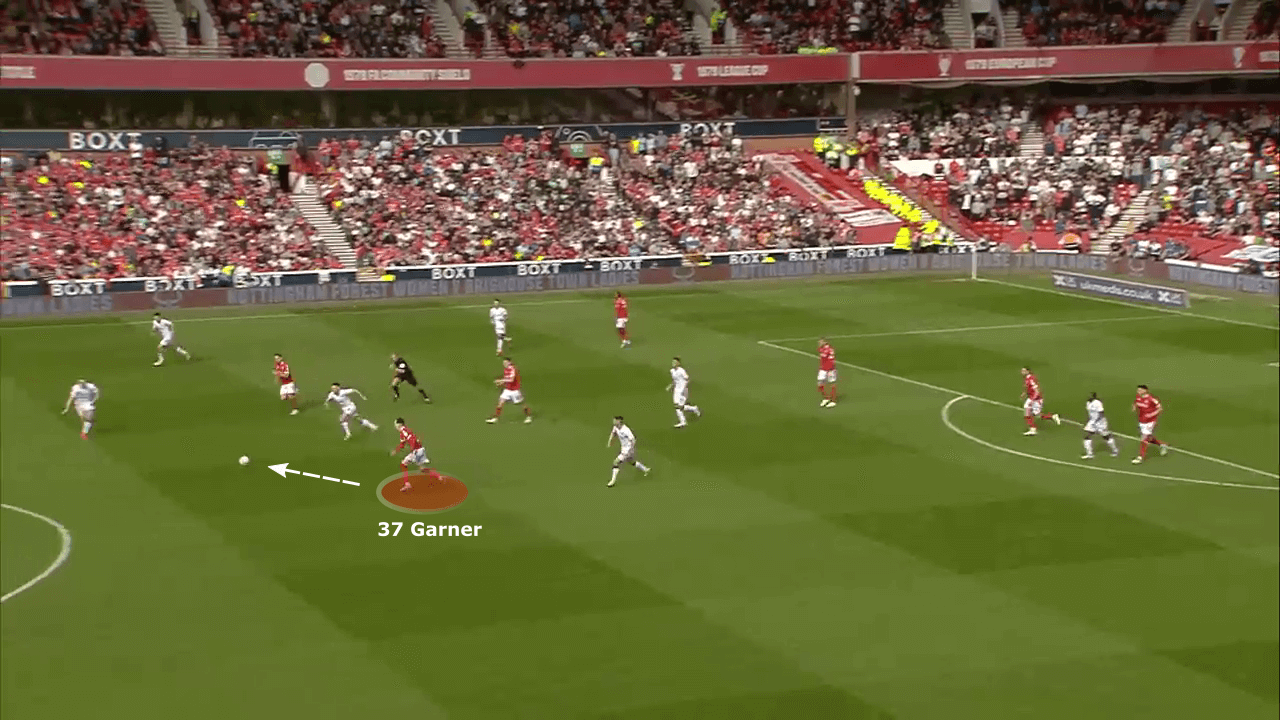 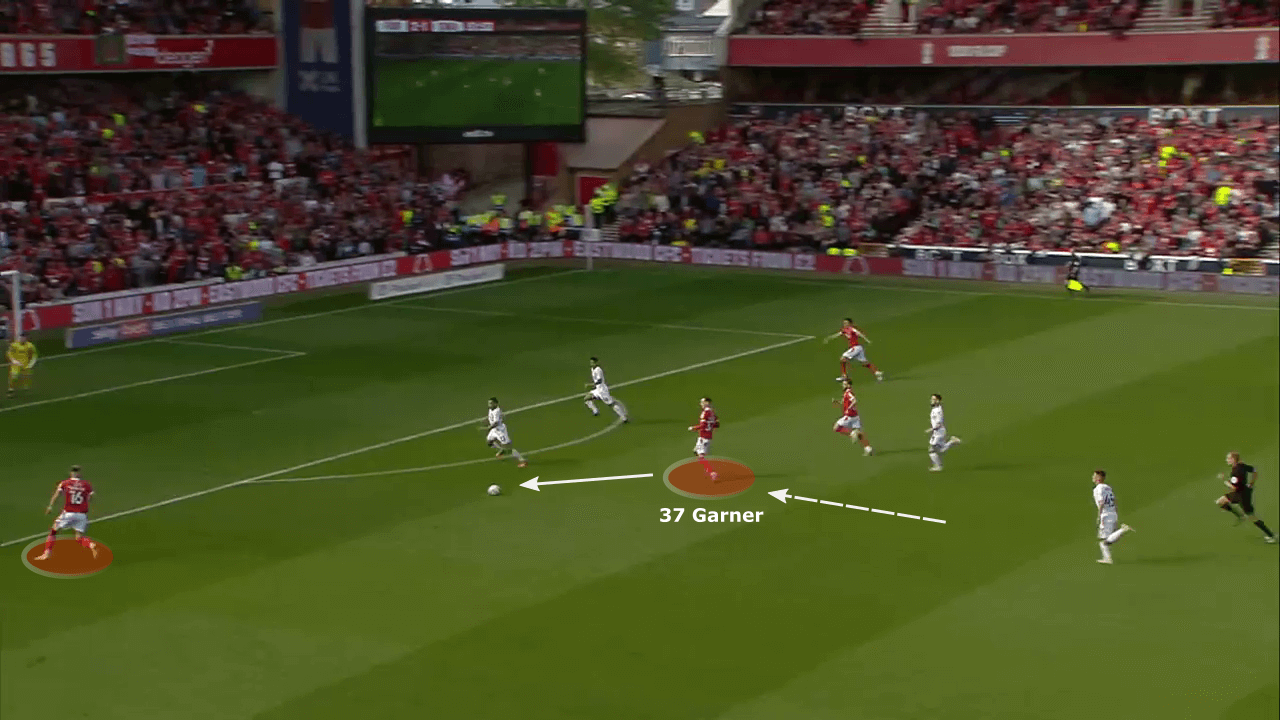 During attacks, Garner loves to drift into the left half-space area, receive the ball from his wing-back and then turn his body towards goal and provide a pass or attempt a shot on goal. 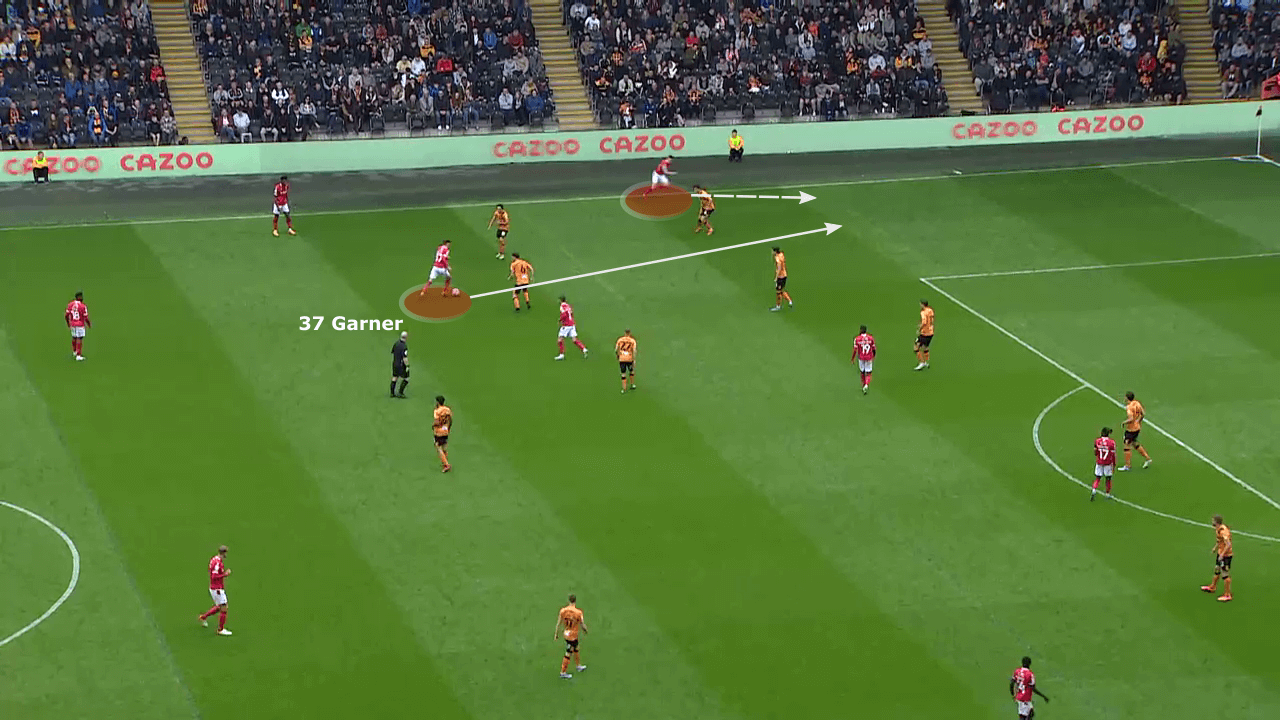 Garner creates an average of 1.06 chances per 90 due to the majority of his passes played forward, an impressive stat for a number 6. An underrated aspect of his game is his ability to pull off key, cutting-edge passes and thread the needle. In the FA Cup tie against Liverpool, he receives the ball in the left channel and directly looks forward. This is the cue for the attacker to make a run in behind the back line. Garner spots this and slides in a wonderful through ball from which Forest nearly equalised. 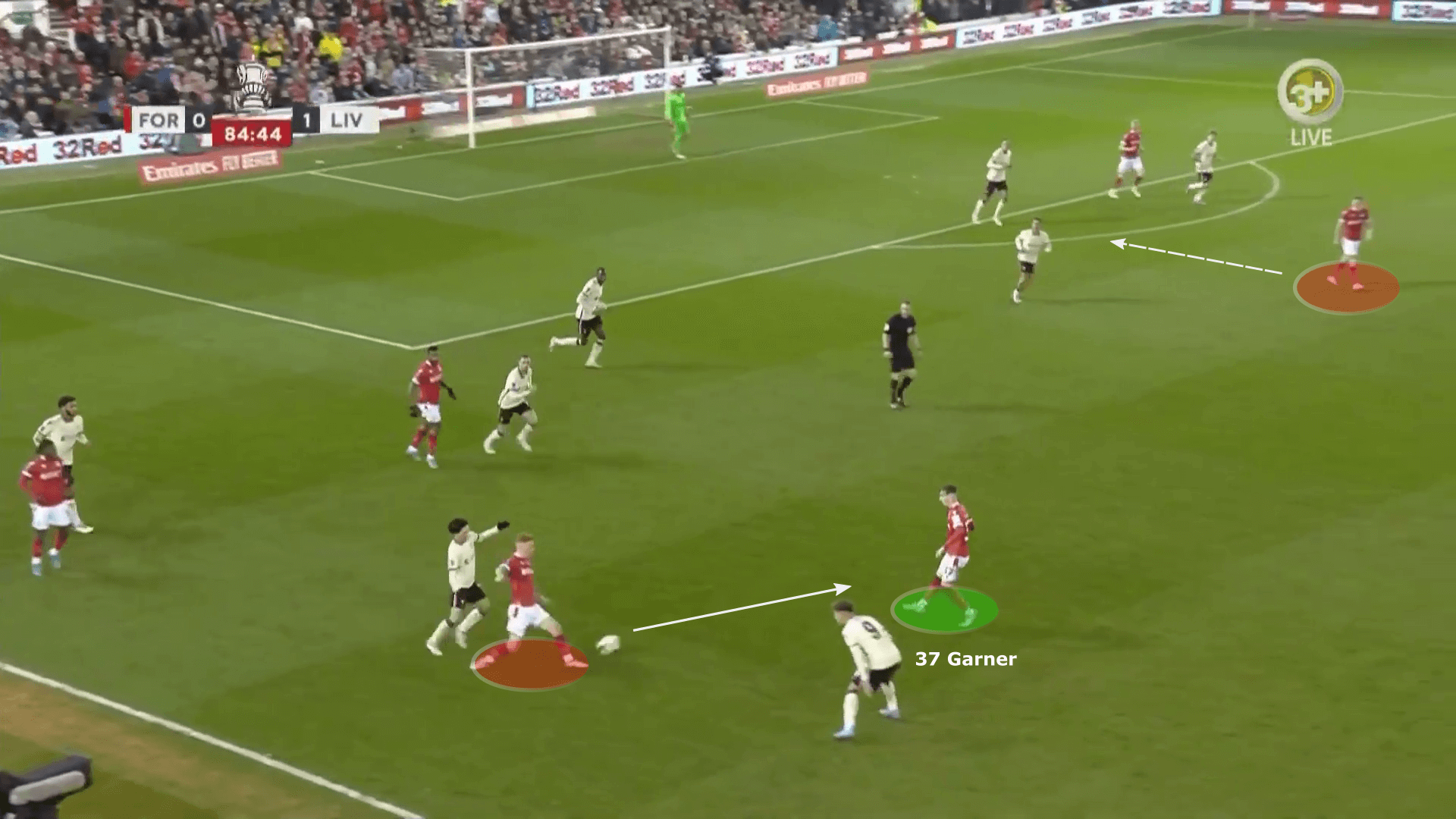 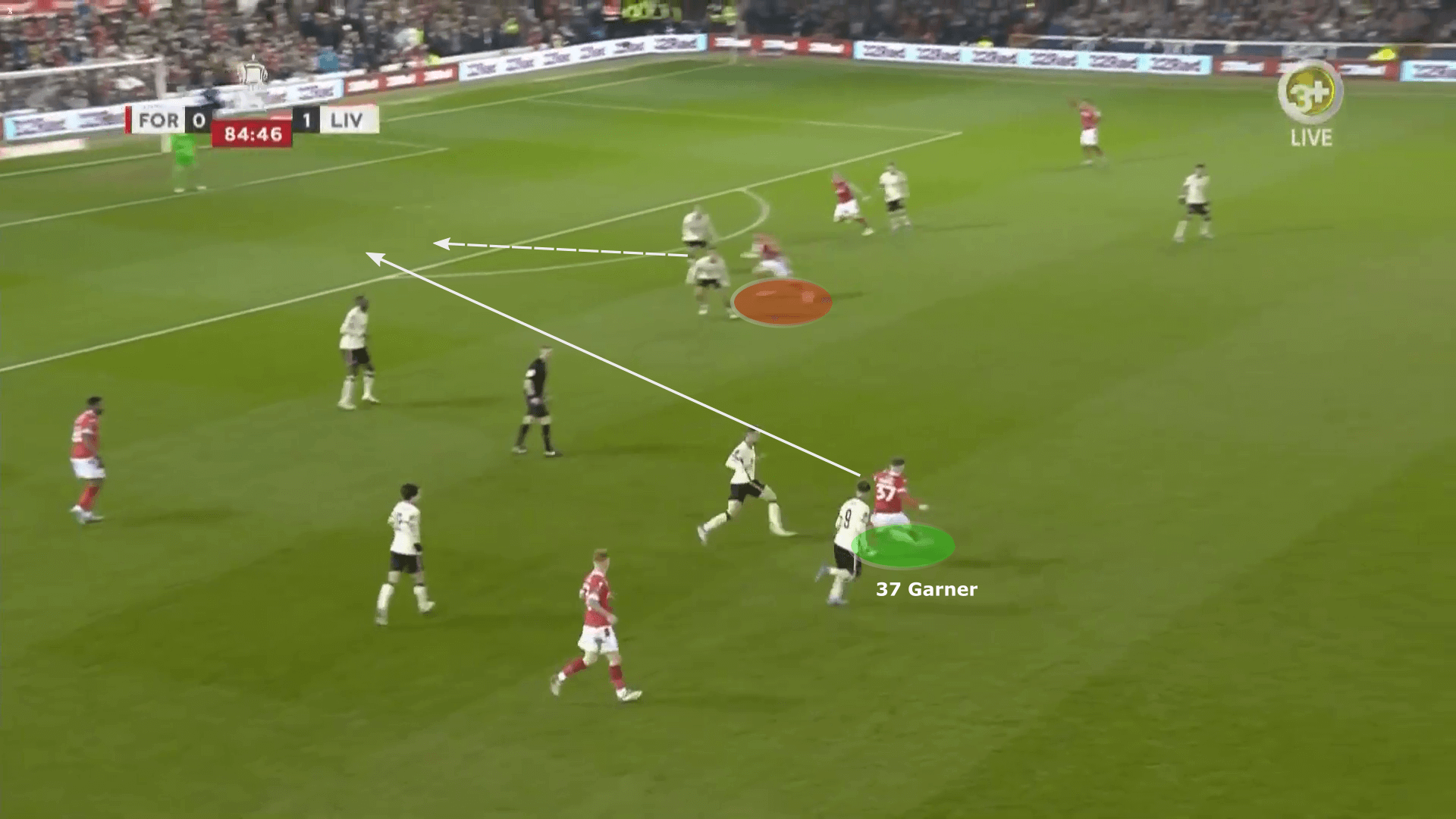 Below are Garner’s pass maps from two of his most dominant passing displays of the season, against West Brom and Bristol City. It’s clear to see the variation in the types of balls attempted and how the passes are scattered all over the pitch. He possesses the ability to switch play to his wing-backs, supply through balls to the wide players and also operate in tighter areas with short-range passes. 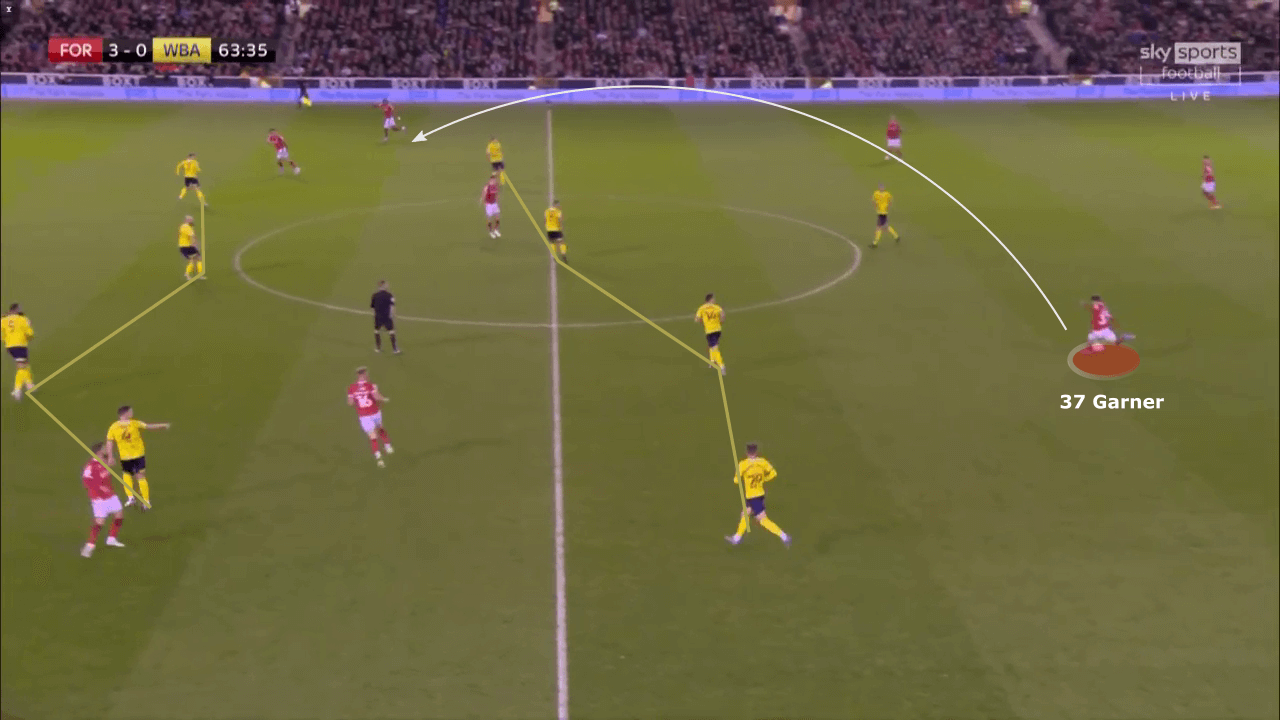 “I like to see everything in front of me – runs and players popping into pockets, things like that. I like to be on the ball as much as I can and be the one who makes the passes and who makes the goals. It’s something I am really enjoying, sitting there and dictating the play. It’s good.”, said Garner.

Not dubbed as the typical defensive midfielder, Garner is one of those players who always puts a shift in and plays with his heart on his sleeve. His defending can be described as intense. What’s particularly impressive is the number of recoveries, 6.07 per game during last season. He is constantly picking up second balls and recycling play. He has engaged in 6.46 defensive duels, 1.45 aerial duels and 3.24 loose ball duels per game, in addition to averaging 3.86 interceptions.

His tackles, interceptions and challenges are impressive; he has that knack and hunger to hunt the ball down in the middle third.

Below is a perfect example of Garner closing down his opponent and winning the ball back for his team. As soon as the pass is played, he makes the movement towards the Huddersfield player and cleanly intercepts the ball. He is never one to shy away from a challenge. 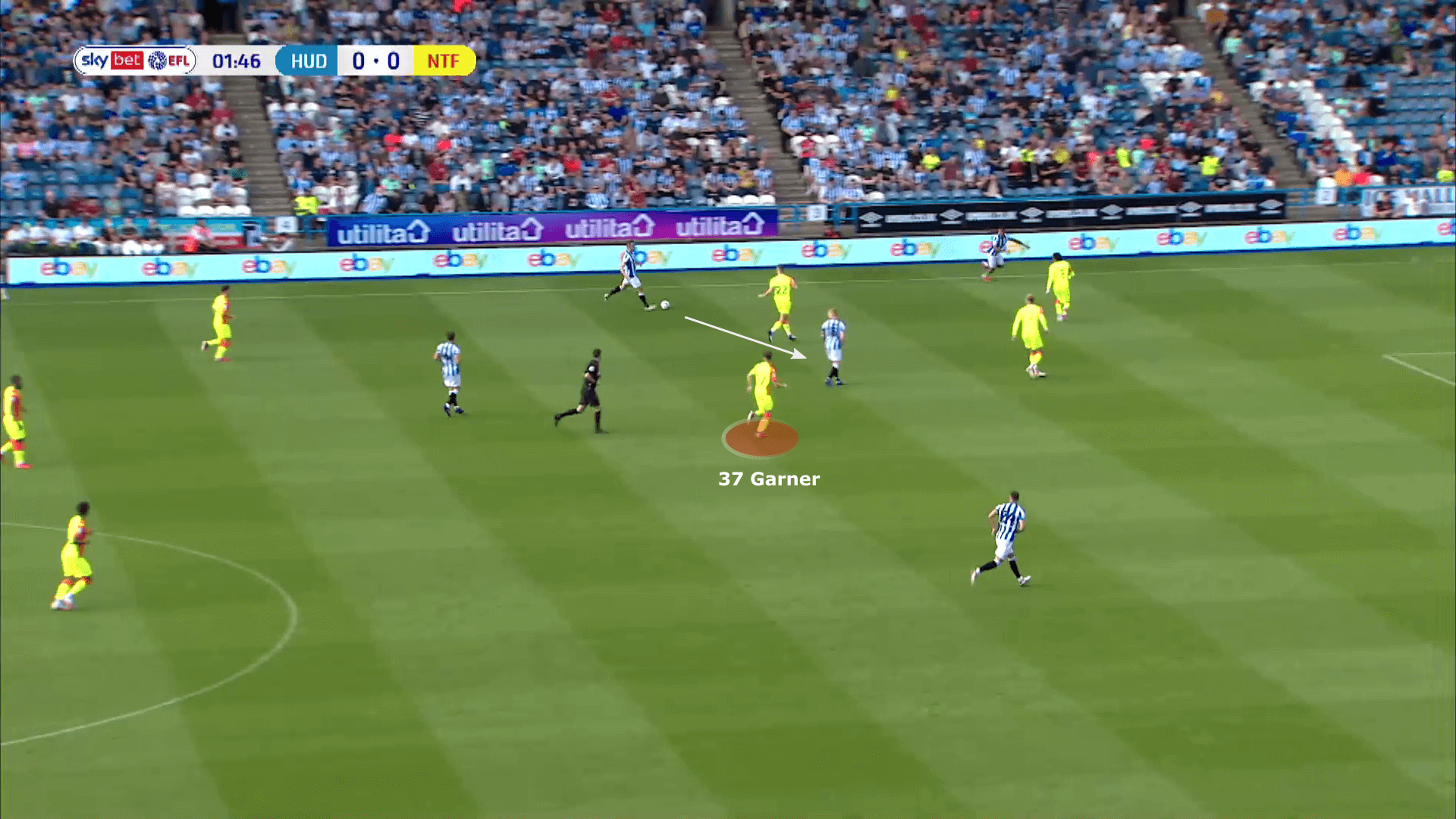 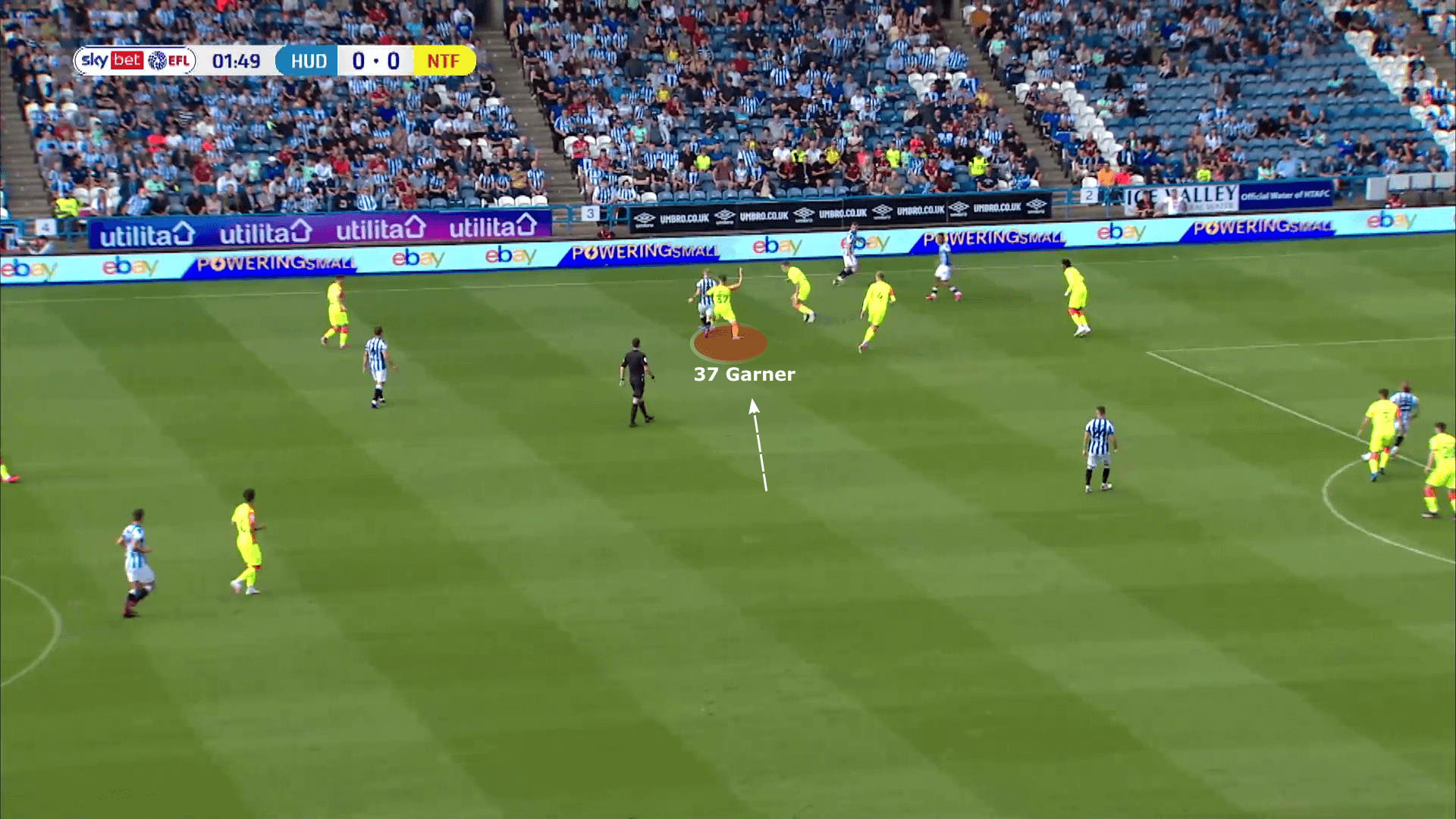 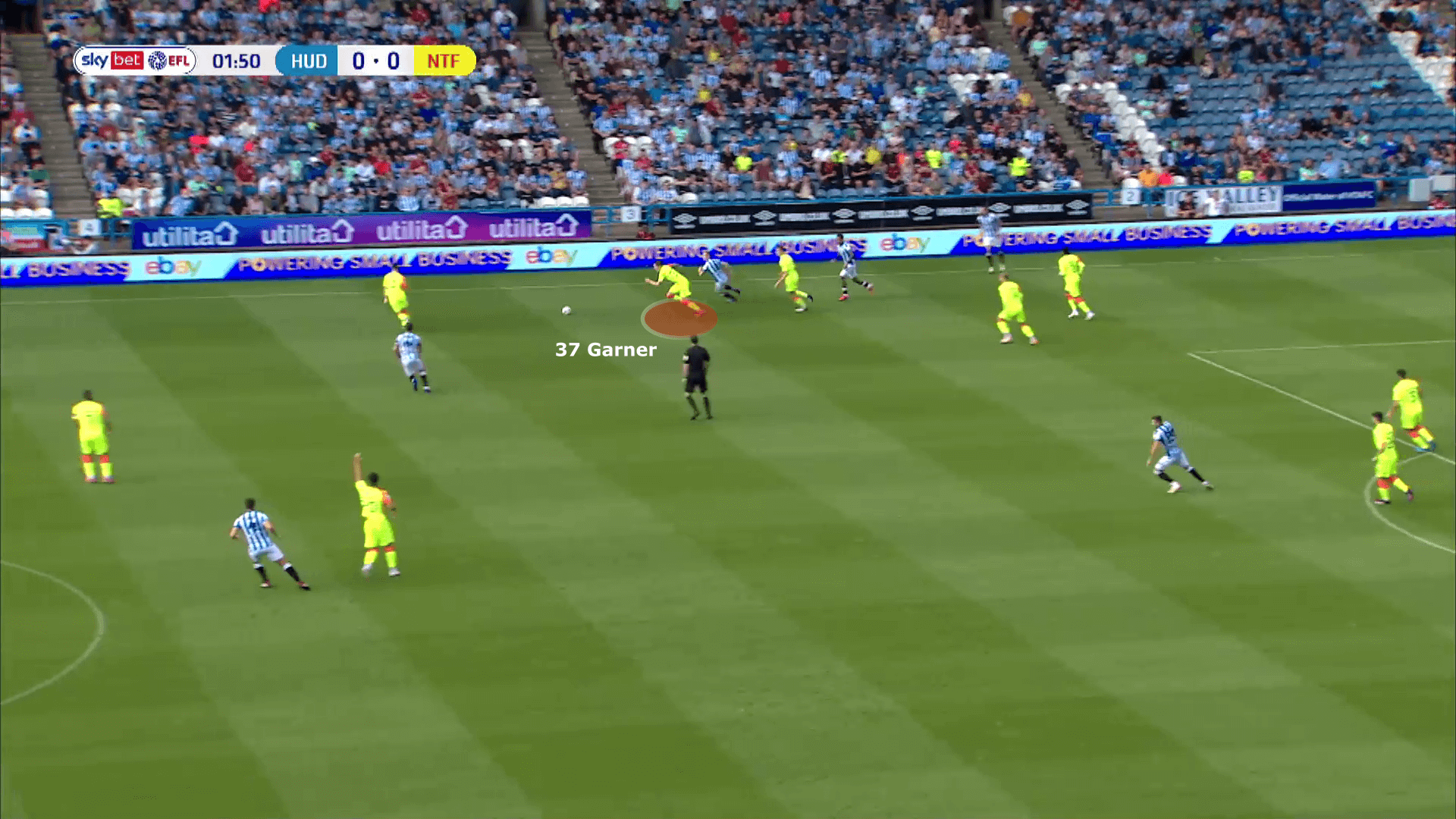 Another important aspect of Garner’s game is his awareness and tactical discipline. He is alert to movements happening in and around him and will cover the spaces vacated by his wing-back or centre-back when called upon.

Here, the ball makes its way into the inside channel and Forest’s CB is dragged outside towards the ball carrier. 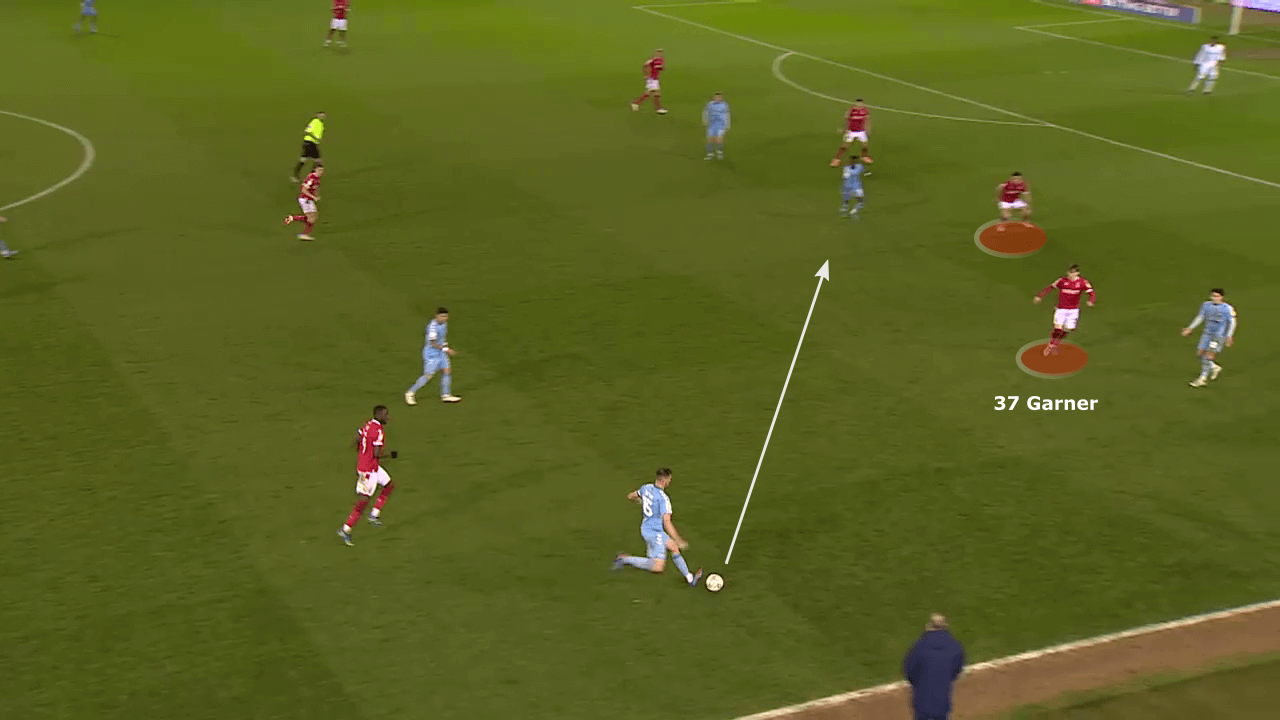 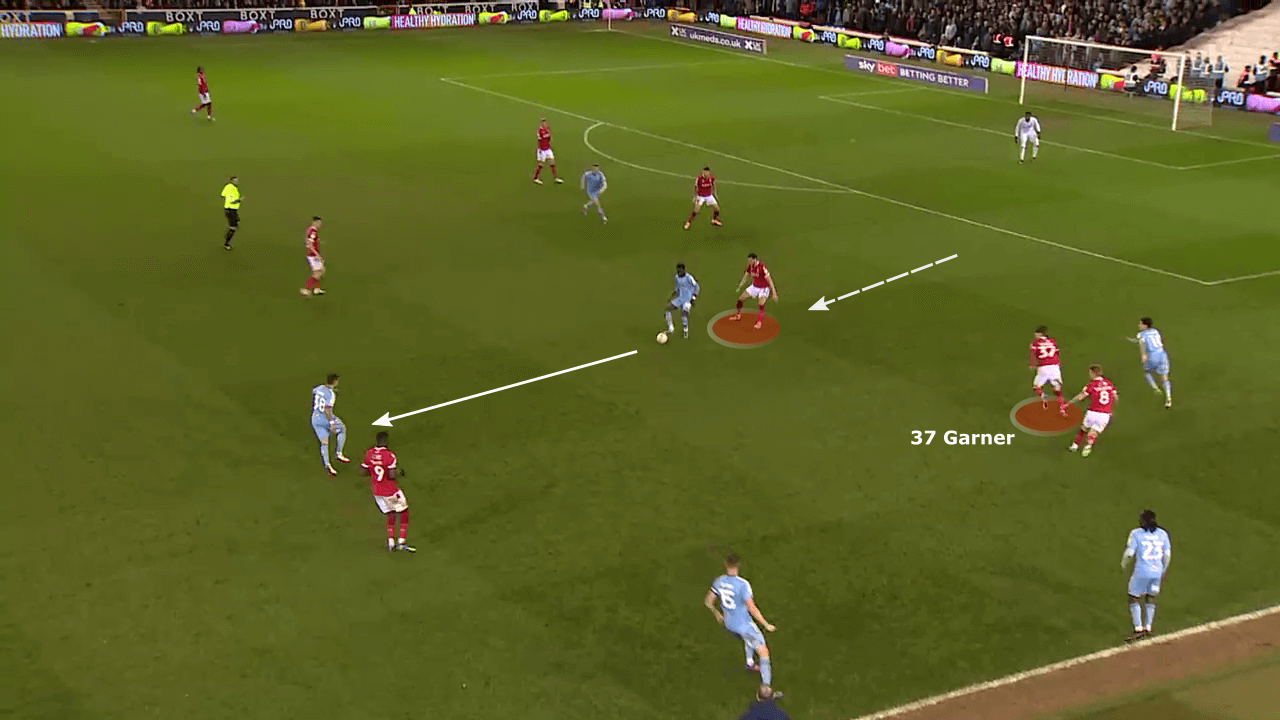 As the ball is cut back, the opposing player makes a diagonal run into the space left behind. Garner spots what is happening behind him and matches the attacker’s movement to track him down and ends up intercepting the incoming through ball and clearing the danger. 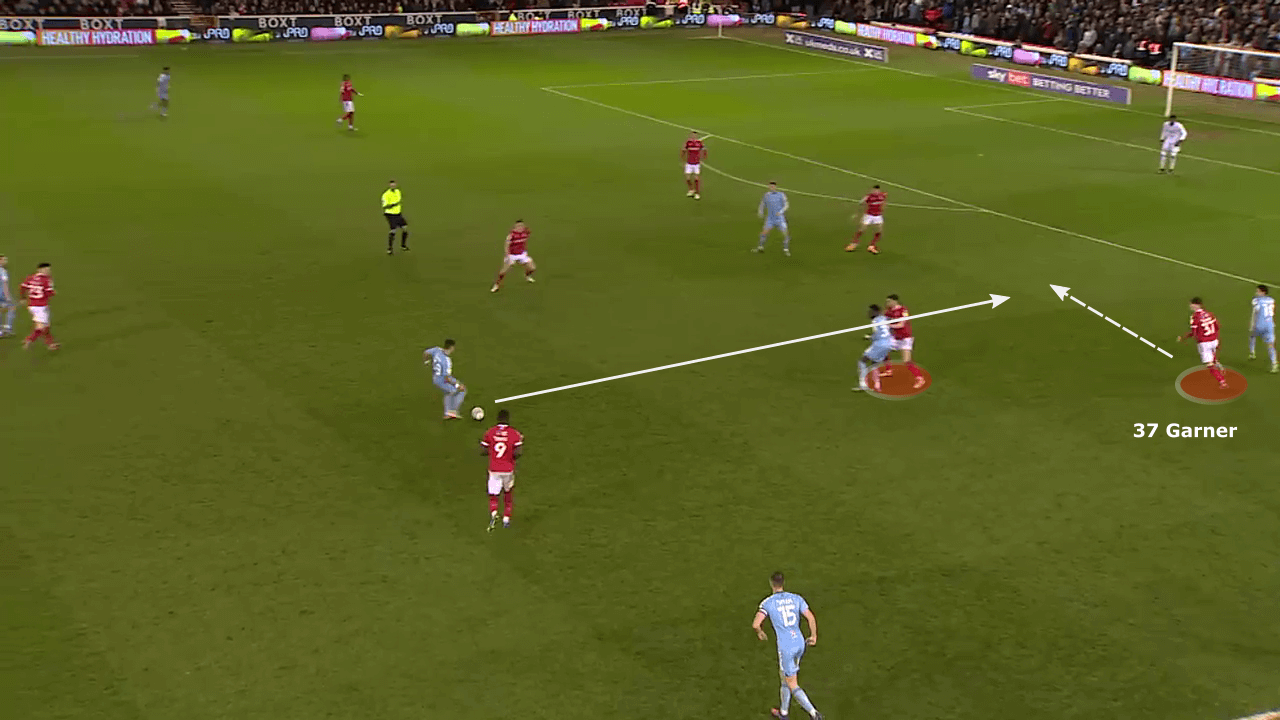 James Garner is quickly developing into a set-piece specialist. He is a very technical player and can whip fantastic crosses into the box from corners and freekicks. Straight away after joining the club, he had the confidence to take over all set-piece duties, even shooting free-kicks.

Garner was directly involved in 14 goals in all competitions during 2021/22, scoring four times and supplying ten assists. Nine of his assists have come directly from set-plays – eight of those from corner kicks which are proving to be devastating. 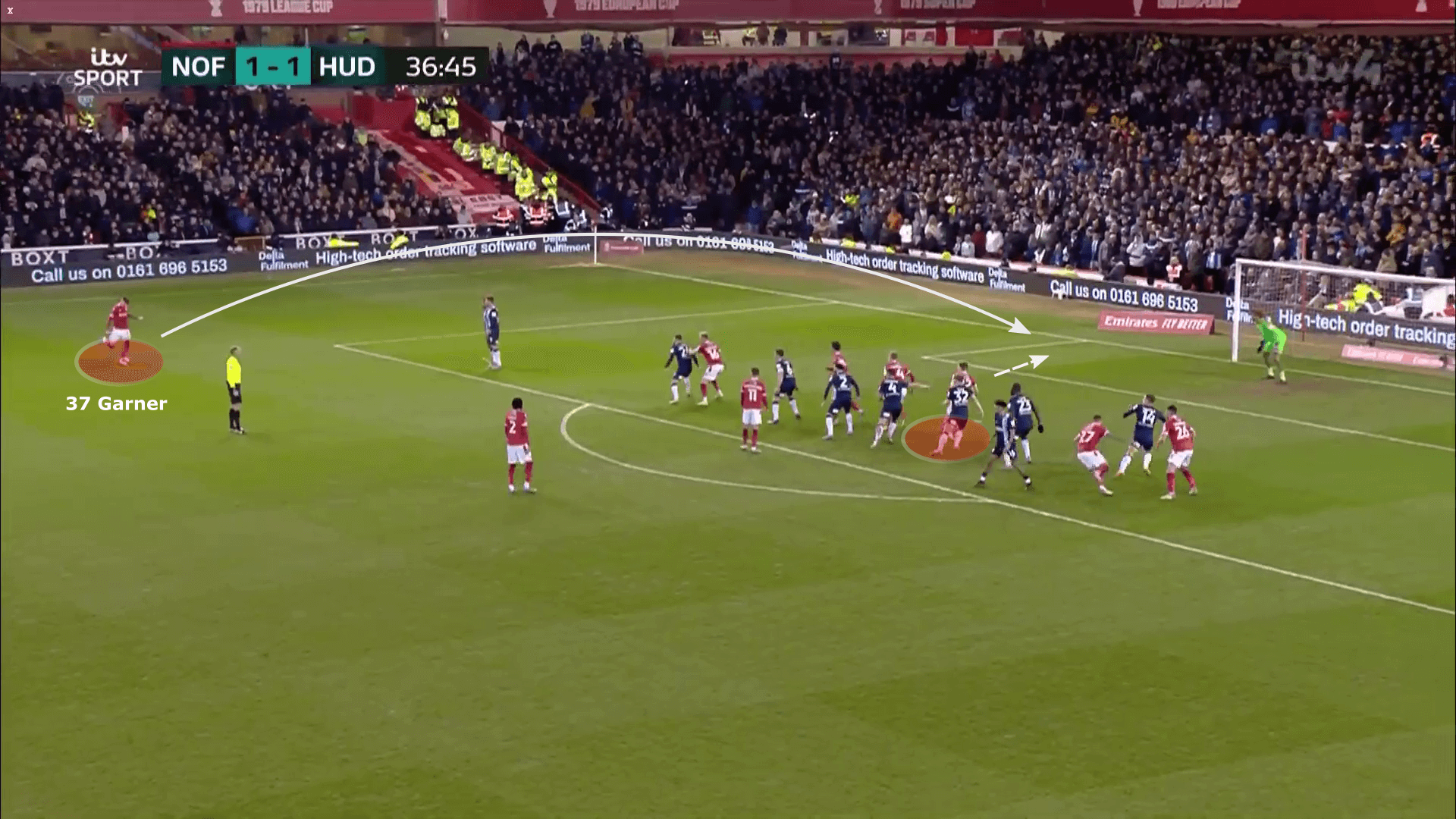 He assisted five times from corners in the Championship last season, one more than Manchester United managed in their entire Premier League campaign.

Midfield companion Ryan Yates described Garner as “one of the best” set-piece specialists in the Championship.

In the last section, we’ll compare Garner’s stats from the 2021/22 season to those of Fred and Scott McTominay, United’s current midfielders who have the same profile as the 21-year-old. 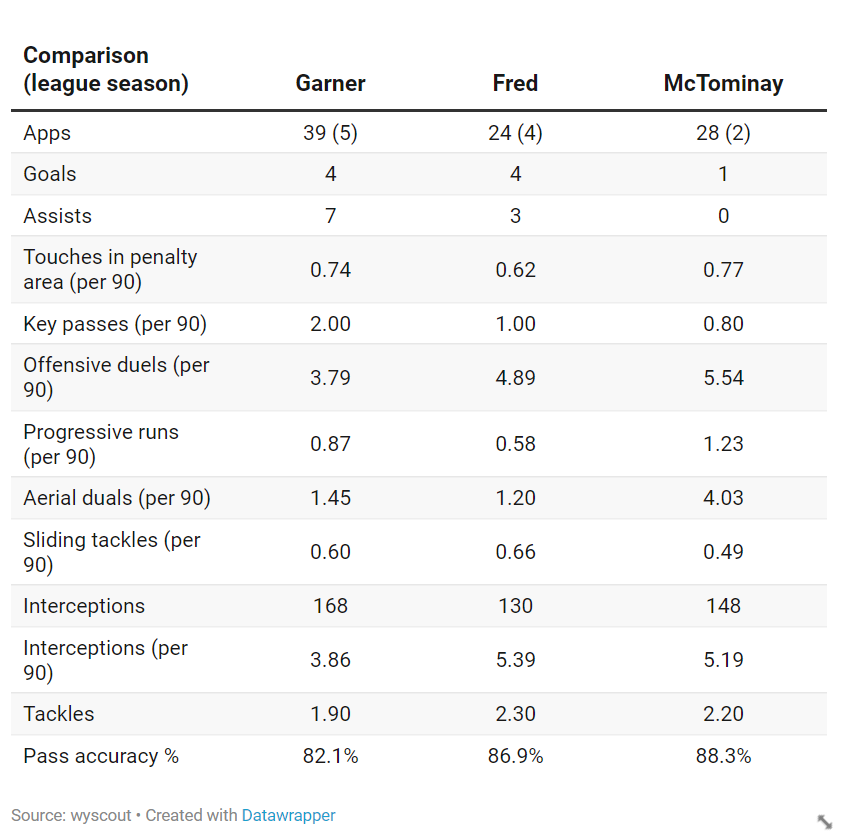 Garner still has some way to become a strong defensive force compared to Fred and McTominay, who are known for their high energy and defensive qualities. However, whilst together they certainly do a good job, there isn’t one of the two who really can take charge and command this position. The quality that Garner possesses which will be most valuable to United is his footballing brain and IQ.

He has that knack of being able to tidy up play which is something United have struggled with, with Fred and McTominay often looking erratic in possession. United need a midfielder to provide that bridge from defence to attack, which have often looked very disjointed.

The current United midfielders have a greater, more commanding physical presence, something which Garner needs to work on in the gym. Standing at 186cm tall, he is the ideal height for a midfielder and his physique will only improve.

In Ten Hag’s 4-3-3 system and tactics, Garner might well be best suited to play the number 8 role when and if called upon. He has the pressing intensity, ability to link play from defence to attack and movement to connect with the front 3. Every top team has a world-class holding midfielder, the orchestrator. And while Garner certainly has potential, he is not ready to fulfil this role yet.

He will need to develop and work on his positioning, transition defence and physicality – as previously mentioned.

We believe James Garner has the necessary attributes and minerals to become a great footballer. Manchester United fans would love nothing more than to find the next Michael Carrick. The Red Devils faithful also have a soft spot for academy players.

He will need to take his chance and convince ten Hag that he is worthy of a place in United’s squad. If the Dutchman thinks otherwise, another loan spell probably beckons. This time to a Premier League club, which would also be extremely beneficial for the player and for United.

One thing is guaranteed, Garner will be a member of a Premier League team next season. 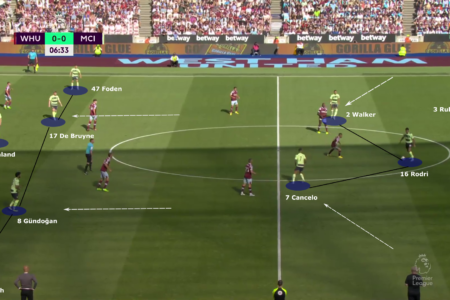 New season, fresh hope and great expectations. The Premier League’s final game of the round upon its highly-anticipated return saw […] 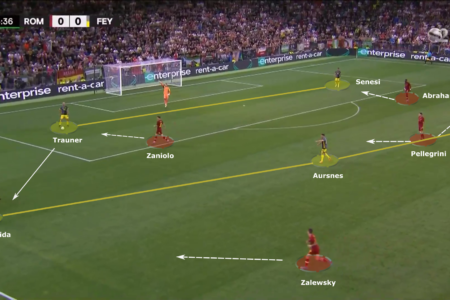 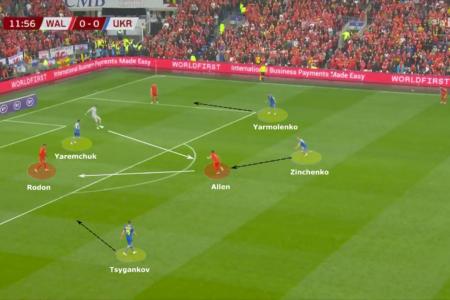 This World Cup play-off final was arguably the biggest game in Wales’ history. The chance to qualify for the tournament […]