Despite his tender age of 22-years-old Chiesa has already 139 appearances for the Viola, a club which he has represented at all levels, starting off in the youth team in 2014/15.

Capable of playing anywhere along the frontline, Chiesa’s versatility is an added bonus, he has also been capped 17 times by Italy, so there is little surprise that he has attracted the attention of bigger clubs.

Fiorentina have had a tough few years, finishing 16th last season and currently standing 13th in Serie A, which does not strengthen their position when trying to keep hold of their best players.

The Italian has played a total of 2,065 minutes of football in Serie A this seasons for Fiorentina, adding nine goal contributions in this period (six goals, three assists), which averages one per every 229 minutes played.

In this scout report, we explore the important role which Federico Chiesa plays for Fiorentina, examining the Italian’s contributions across the defensive, middle and attacking thirds of the pitch through a tactical analysis.

This season Fiorentina have generally favoured a 3-5-2 formation under both Vincenzo Montella and Guiseppe Iachini, the tactics being utilised in 59% of matches in Serie A, in which Federico Chiesa has often lined up as a striker. Despite being labelled in this role, the Italian would often operate from the flanks as he looked to involve himself in the game, favouring his more natural position as a winger. 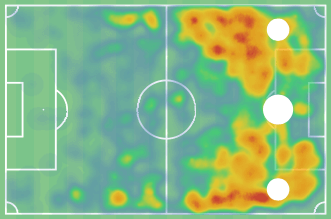 This tendency can clearly be seen when carrying out an analysis of Federico Chiesa’s heat map, the striker mainly operates from two areas of the pitch, the advanced area of the middle third and the attacking third, favouring a position on either the left or right-hand side of the pitch, which is understandable considering his natural position as a winger. It is from this area of the pitch that Chiesa can look to utilise his explosive speed and ability on the ball to isolate opposition or progress the ball through direct runs. 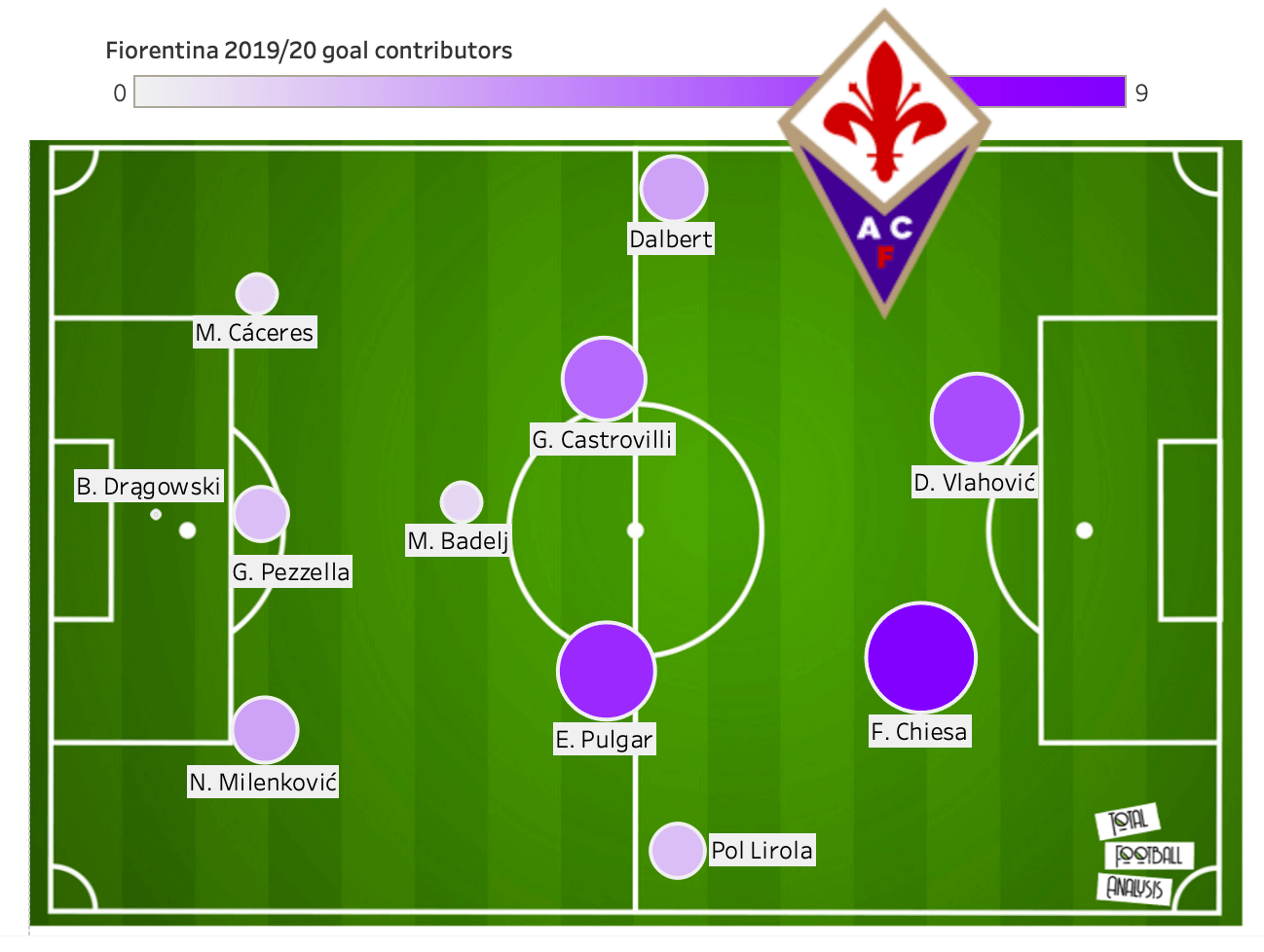 The above data visualisation highlights Chiesa’s importance to Fiorentina; the young Italian has been fundamental in relation to the team’s output this season. As you can see Chiesa is Fiorentina’s most threatening player in terms of goal contributions; he is the only player for the Viola who has added a significant amount of goals and assists this season, Erick Pulgar coming in second with four goals and three assists.

Federico Chiesa relies on his explosive pace in order to power past opposition defenders into space beyond the defensive line. The young Italian is a player who thrives off confidence and at his best he is extremely dangerous. Chiesa’s speed and direct approach on the ball make him a key component to the counter-attack used by Fiorentina. 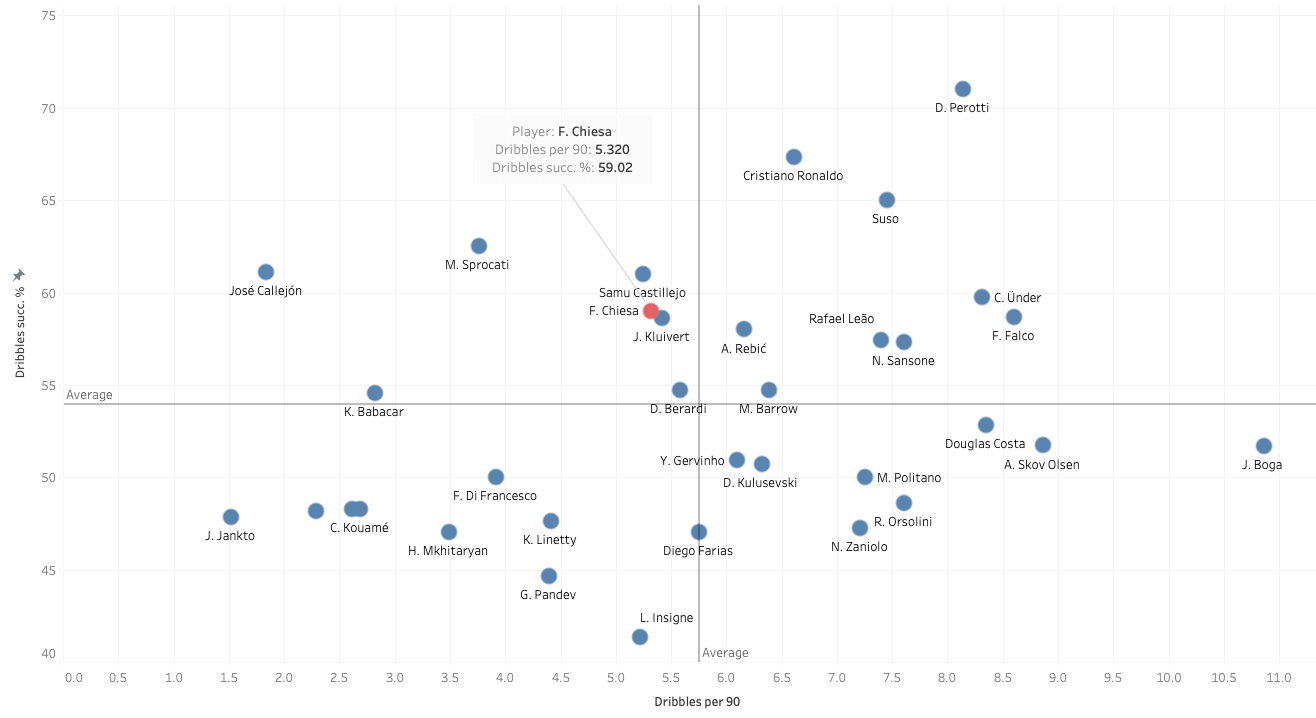 Before taking a closer analysis into Chiesa’s dribbling, with a particular focus on his attempts within the final third, I have produced the above data visualisation to show where the Italian sits in relation to all wingers in Serie A. Federico Chiesa is performing slightly below average in relation to his dribbles per 90, which sits at 5.32. However, this figure is even more impressive considering that the Italian has been deployed as a striker in 19 out of his 23 appearances in the league, which really signifies his desire to be involved within the game. Chiesa also can boast the eighth-highest dribble success rate in this category of players, sitting above average at 59%. 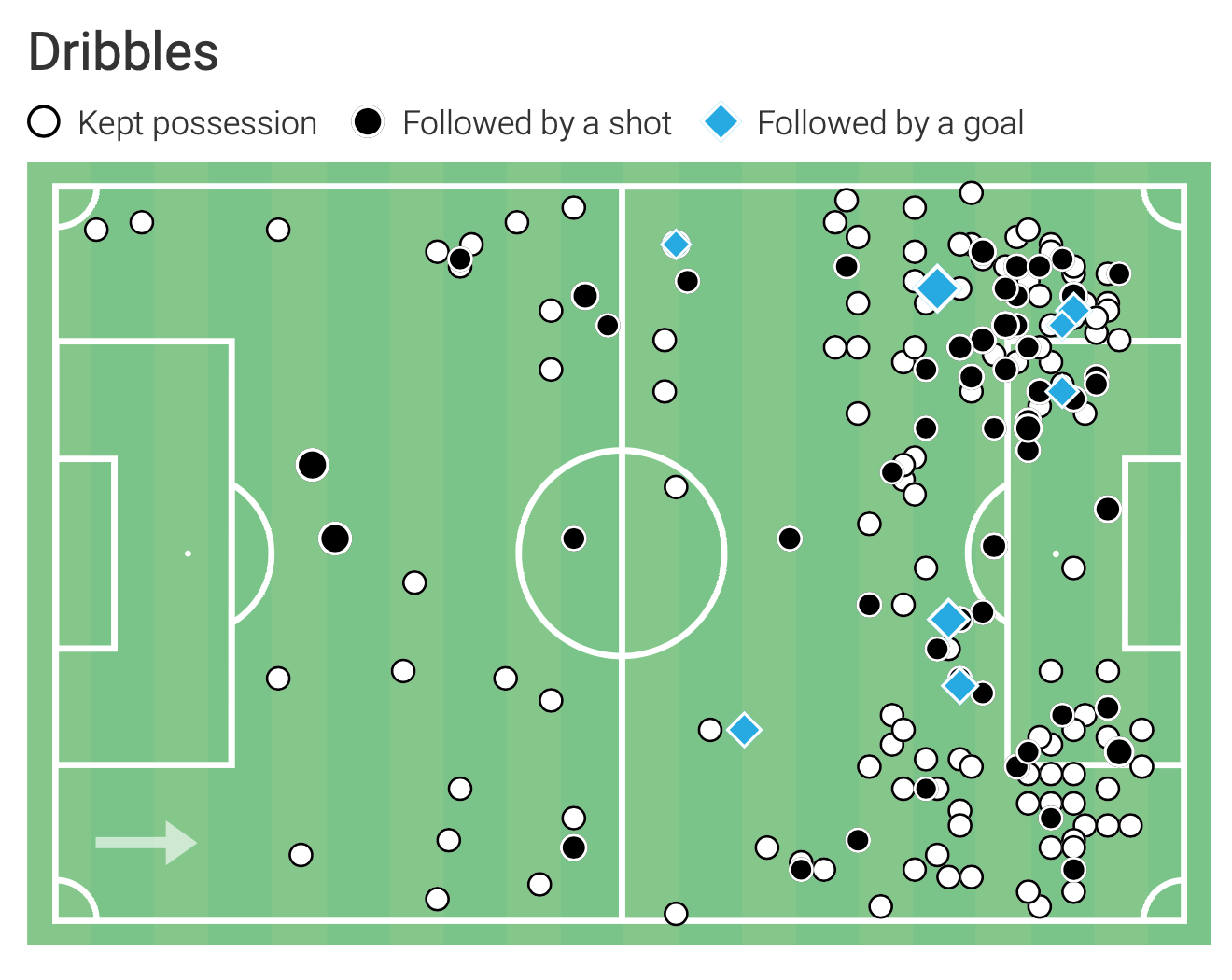 The above image shows Chiesa’s dribbles in the league, as you can see the majority of these are within the attacking third and often take place within the outside vertical channel or within the half-space. It is in these situations that Chiesa’s explosive pace and ability in a 1v1 situation which make him such a threat to the opposition. 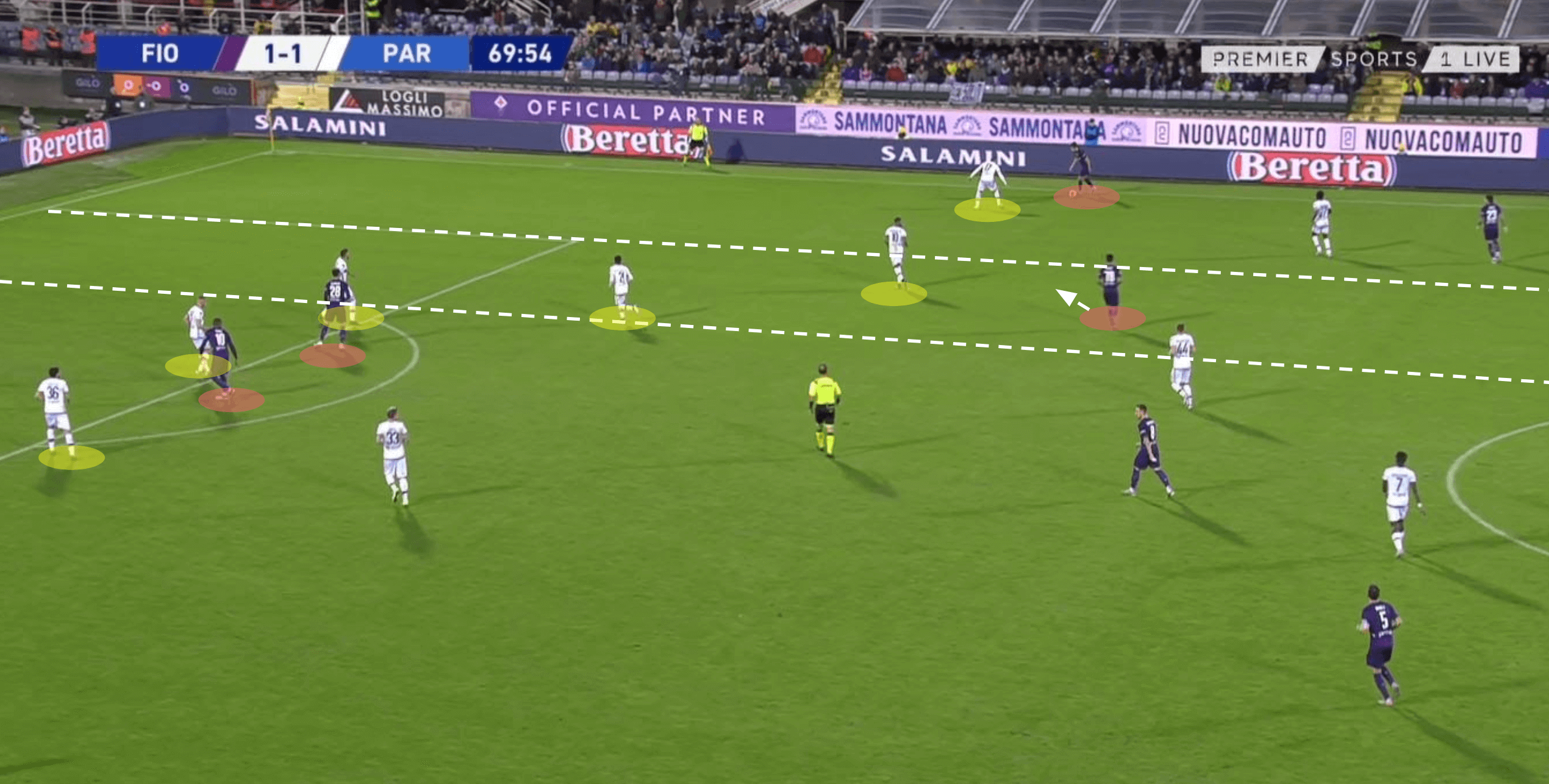 An example of Federico Chiesa’s ability to drive with the ball can be seen in the above image, firstly against Parma, Chiesa receives the ball in the outside vertical channel with Parma set up in their familiar compact block. The Italian needs no second invitation to use his pace to exploit his marker and progress with the ball into the box, where he attempts to lay the ball off to Kevin-Prince Boateng in a compact area instead of identifying the space at the back post for the on-rushing Dalbert. 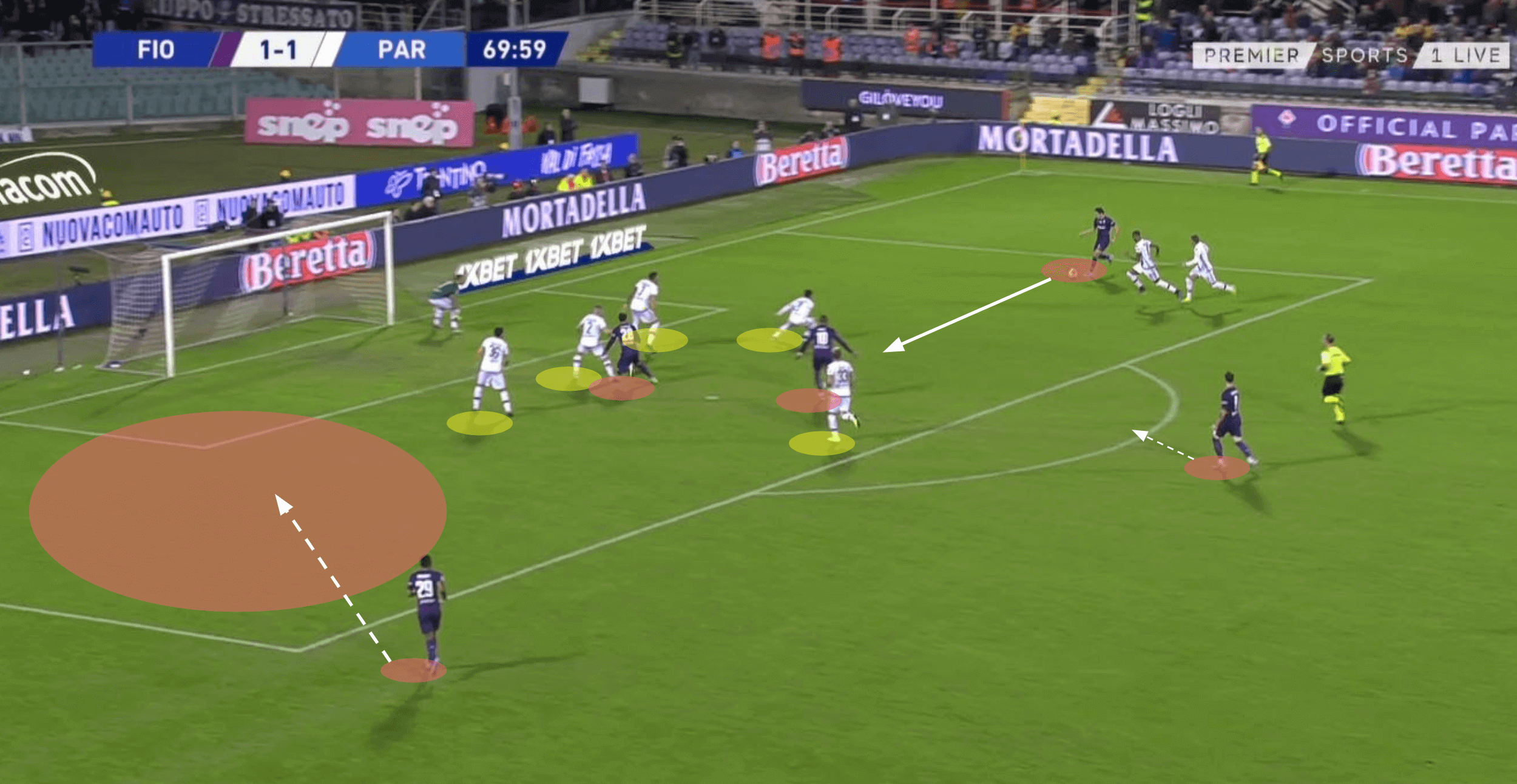 Another example of Chiesa’s ability on the ball can be seen below against Juventus, here Chiesa receives the ball in an extremely tough situation as he is about to come under significant pressure from three opposition players on the press. 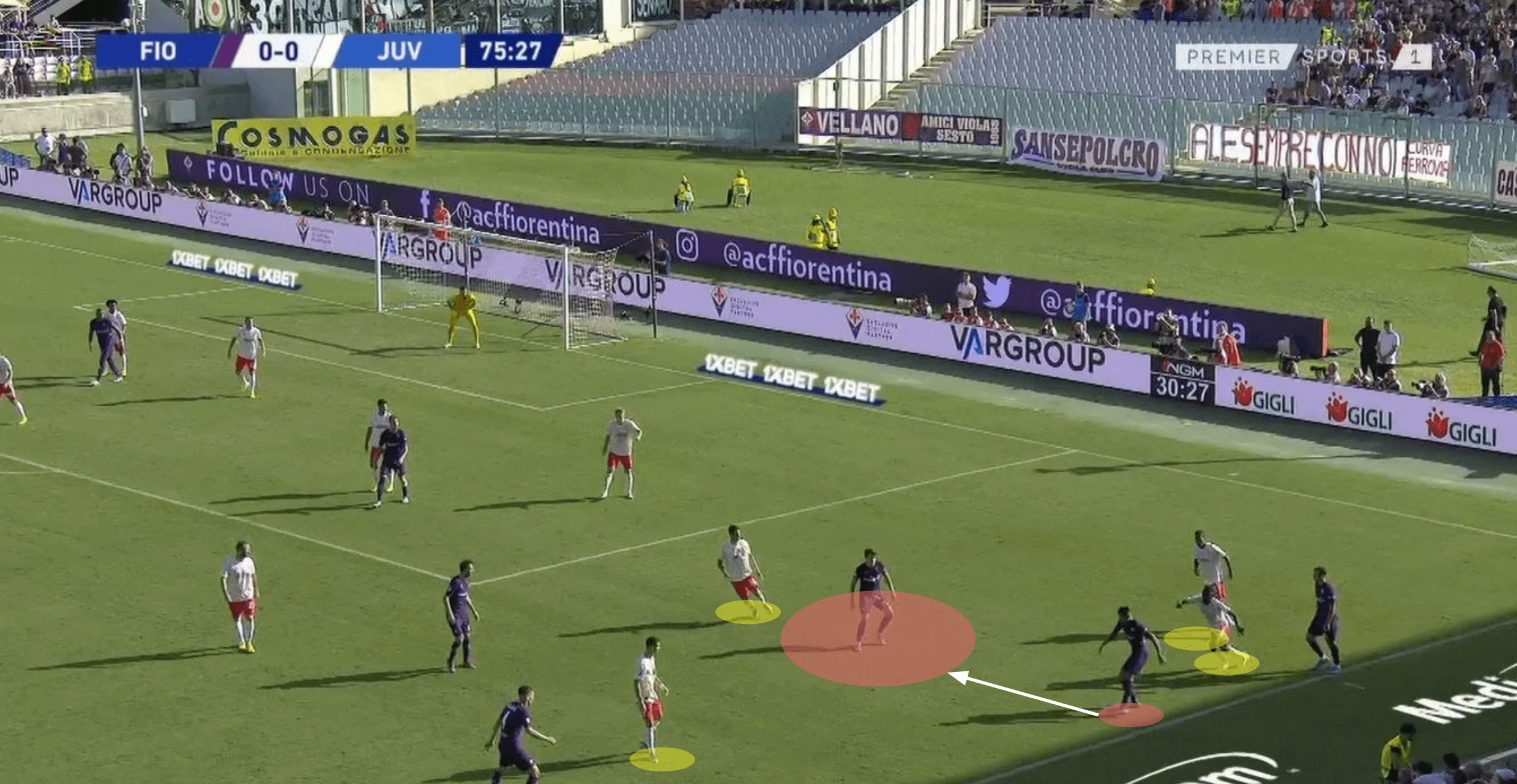 Here Federico shows his press-resistance, taking the ball under pressure and staying on the ball to make a positive action. Below the Italian uses his dribbling ability and unpredictable change of direction to power his way behind the defensive line and deliver a driven cross. 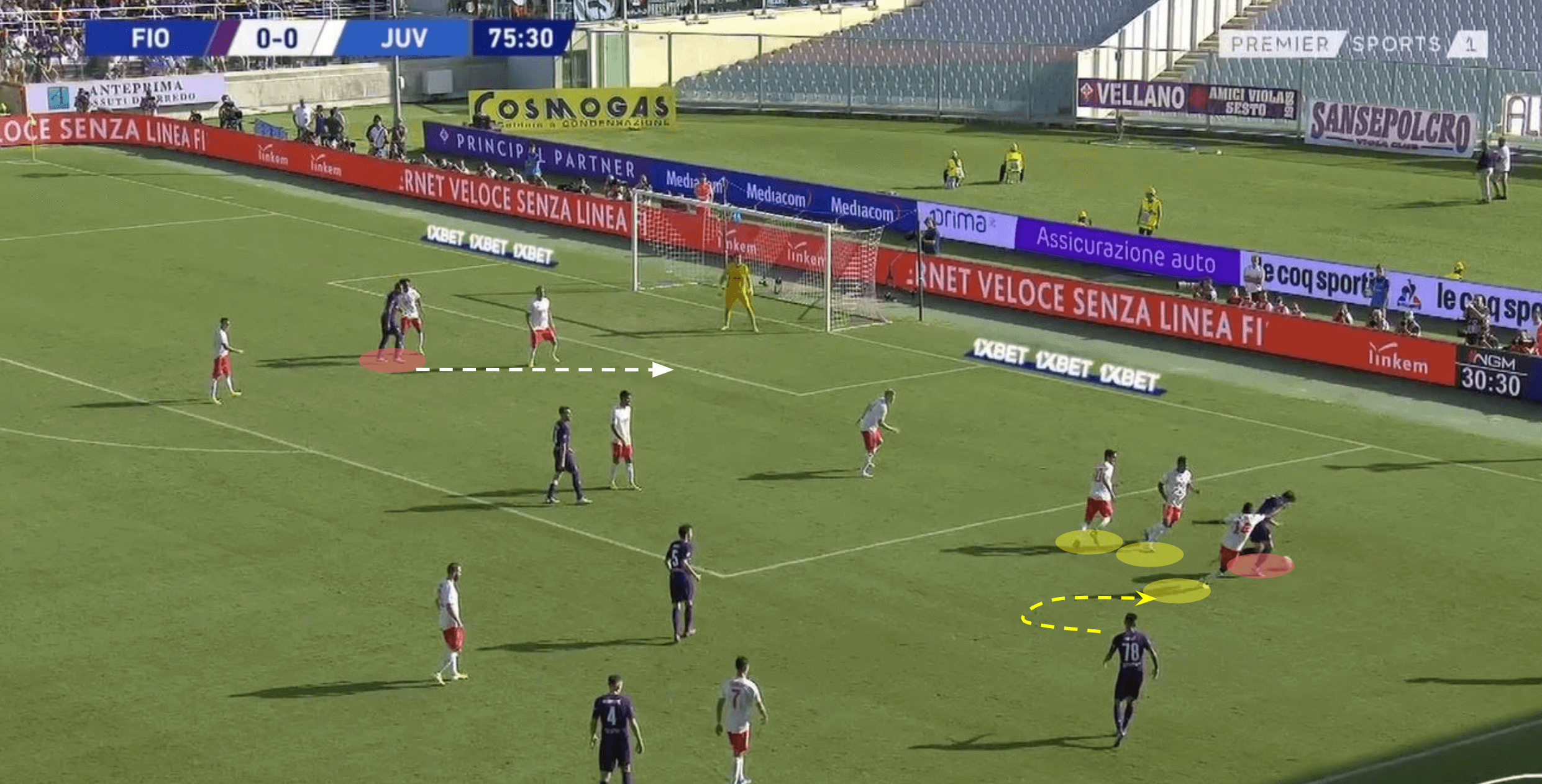 If there is one area of Federico Chiesa’s game which he could look to fine-tune, it is his decision-making ability. It could be argued that the Italian lacks experience in this department, which affects his ability to select the correct decision in relation to his timing of the pass or the option to shoot. Like most young players this is a quality which you normally see wingers develop over time, especially if they are to reach the heights of Rahim Sterling, Adama Traore to name a few, both of which had question-marks over their end product during the early years of their career.

In the above image, we can see an example of Chiesa’s naivety as he delivers an early cross into the Parma box, for those of you who have studied Parma this year in Serie A you will know that they have been superb in dealing with the aerial threat. The better option for Chiesa on this occasion would have been to pass the ball to Milan Badelj who made a run to the vacant space.

Another example can be found below, here Chiesa can be seen surrounded by Juventus players, instead of opting to play the ball to supporting run of Frank Ribery the Italian continues his run with the ball into Matthijs De Ligt who makes an easy tackle. 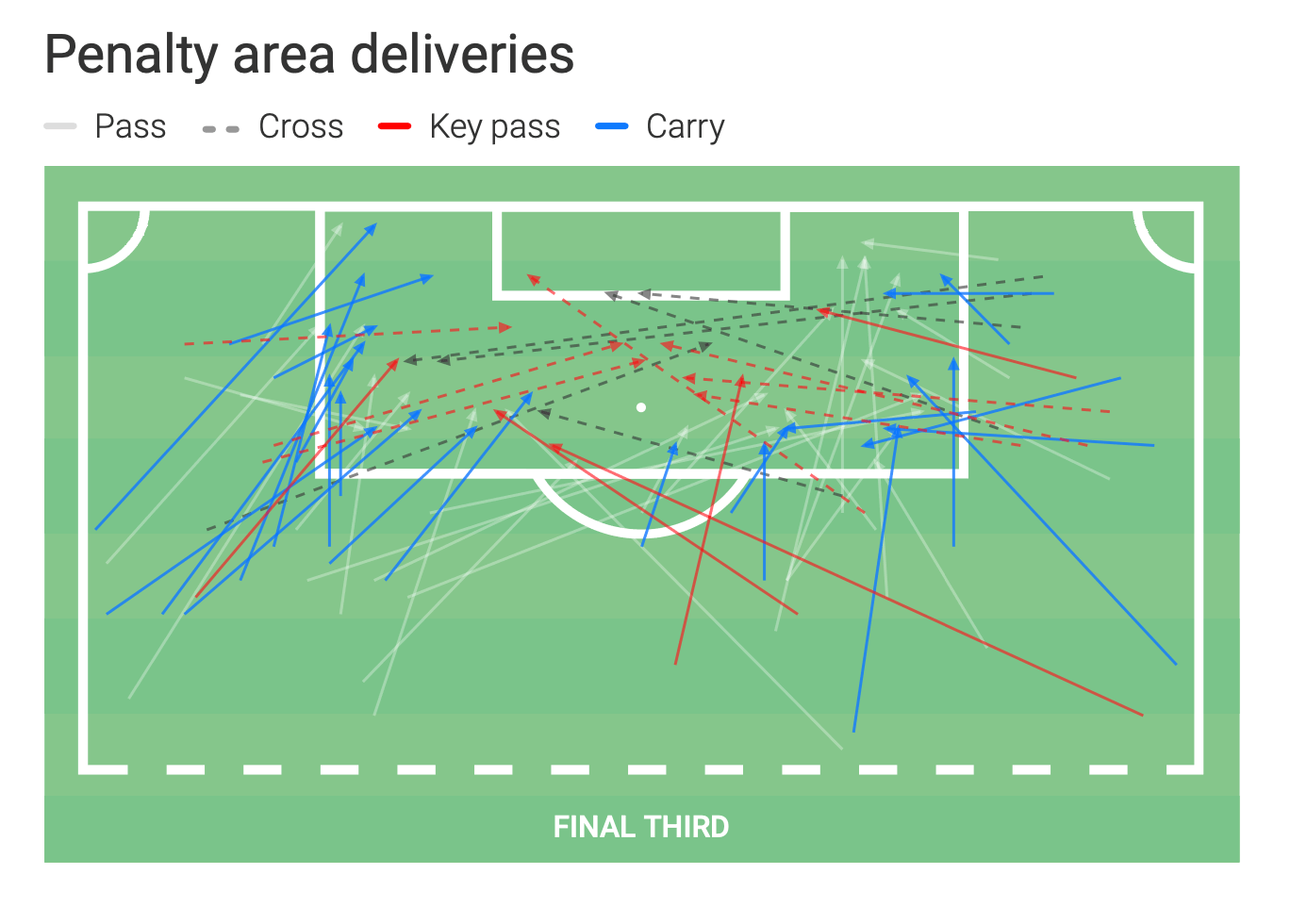 The above image shows us how Chiesa operates in the attacking third of the pitch, bringing to our attention the Italians preference in relation to penalty area deliveries. I would like to draw your attention to Chiesa’s carries, with a particular focus on his entries from the left. Notice the angle at which Chiesa enters the penalty area, the 45-degree angle gives the Italian a much better chance of scoring should he take a shot across the goalkeeper, whereas the majority of his entries from the right would be attacking the outside shoulder of the defender, making the angle and chance of scoring more difficult.

Taking our analysis a little deeper by looking at Chiesa’s passing in key areas (advanced middle third and the attacking third) of the pitch, will give us an insight into how Chiesa can impact a game in attack. 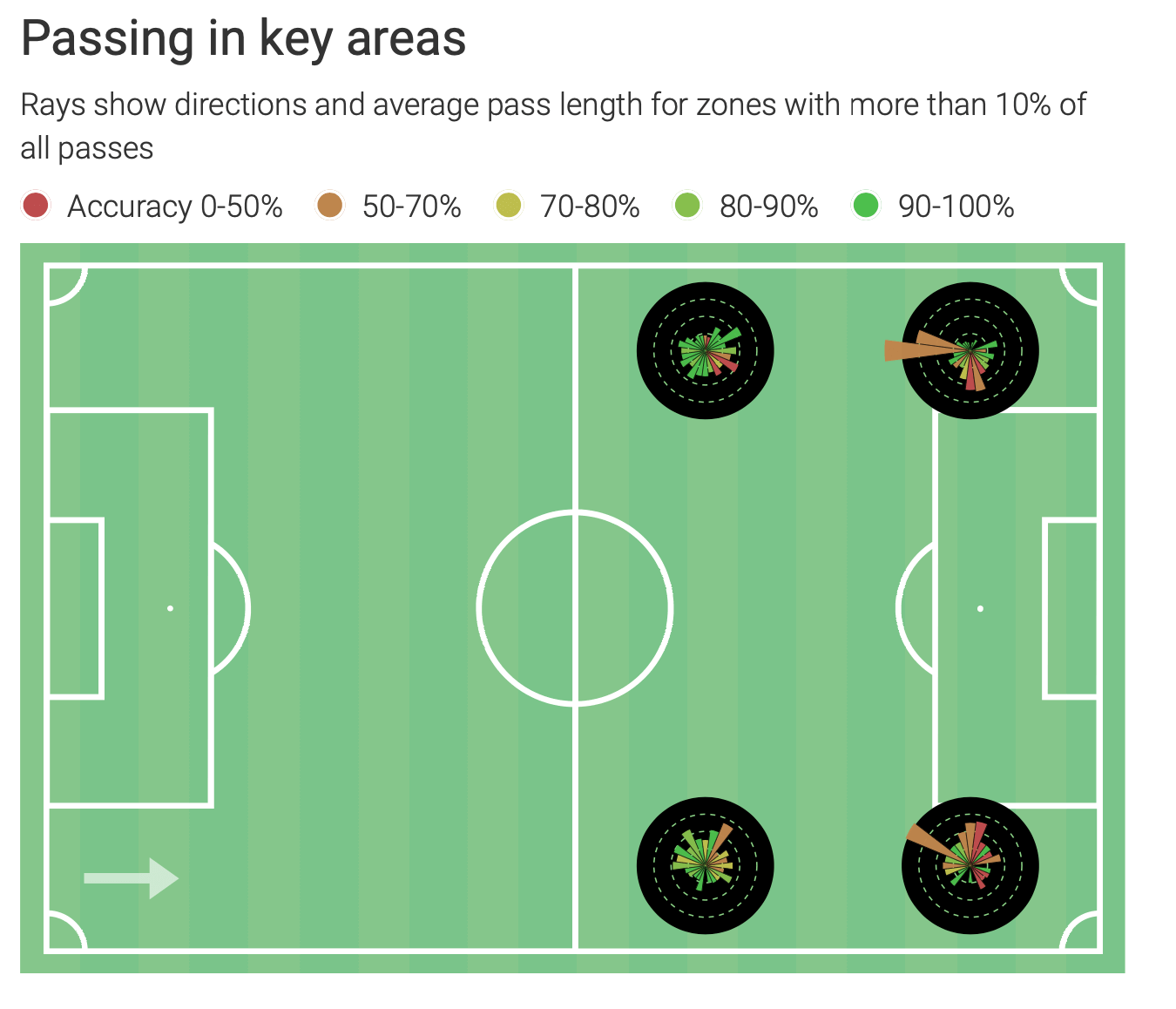 As you would expect, Chiesa follows the ‘norm’ with regards to the longer passes in the attacking third, seeing a drop in accuracy. This is expected considering the area of the pitch, the box, being more compact and having restricted passing lanes due to the volume of free space being reduced. My take away from this visualisation is that Chiesa’s passing ability has an improved accuracy when operating from the left, giving the fact he is right-footed comes as a surprise. All passing rays highlight Federico’s ability to be an effective ball player at a short distance, with the majority of these passes having high accuracy, making the Italian an integral figure when looking to play combinations in compact areas to create space for others off the ball.

Federico Chiesa has helped himself to six goals this season in Serie A, a figure which is below his expected goals (xG) value of 8.5, which indicates that he should have really hit the back of the net a few more times. The Italian is a volume shooter and currently has taken 79 shots in the league which sees him ranked in joint fourth space with Lautaro Martinez. 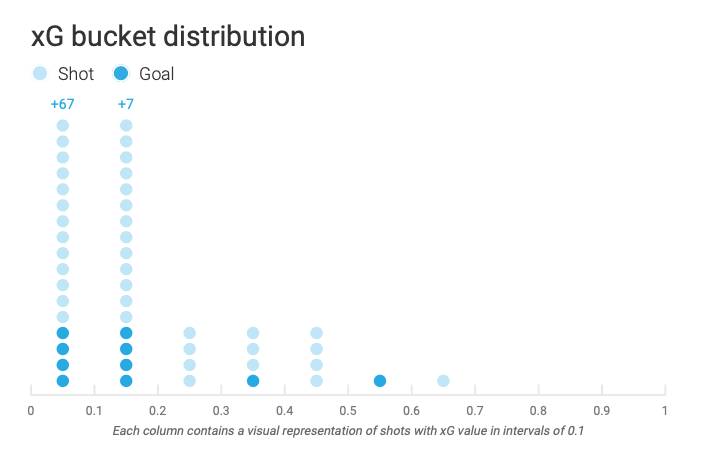 An analysis into his striking ability shows that a significant amount of his shots come from areas which have a very low xG figure, meaning the likelihood of these shots going in is often less than 10%. Chiesa also has a shots on target figure of 42.7 percent, which sees him sit in the middle percentile in relation to this statistic for volume shooters, Luis Muriel tops the charts with a figure of 55%, whilst Dries Mertens of Napoli has the lowest with 23%.

Fiorentina are relatively passive in the defensive phase, the Viola have a passes per defensive action value of 286 which sees them lower half of teams in relation to this metric.

Despite the teams figure in relation to pressing, looking at Chiesa’s defensive actions, recoveries in particular, you can see that the Italian has regained possession for Fiorentina the most through counter-pressing. 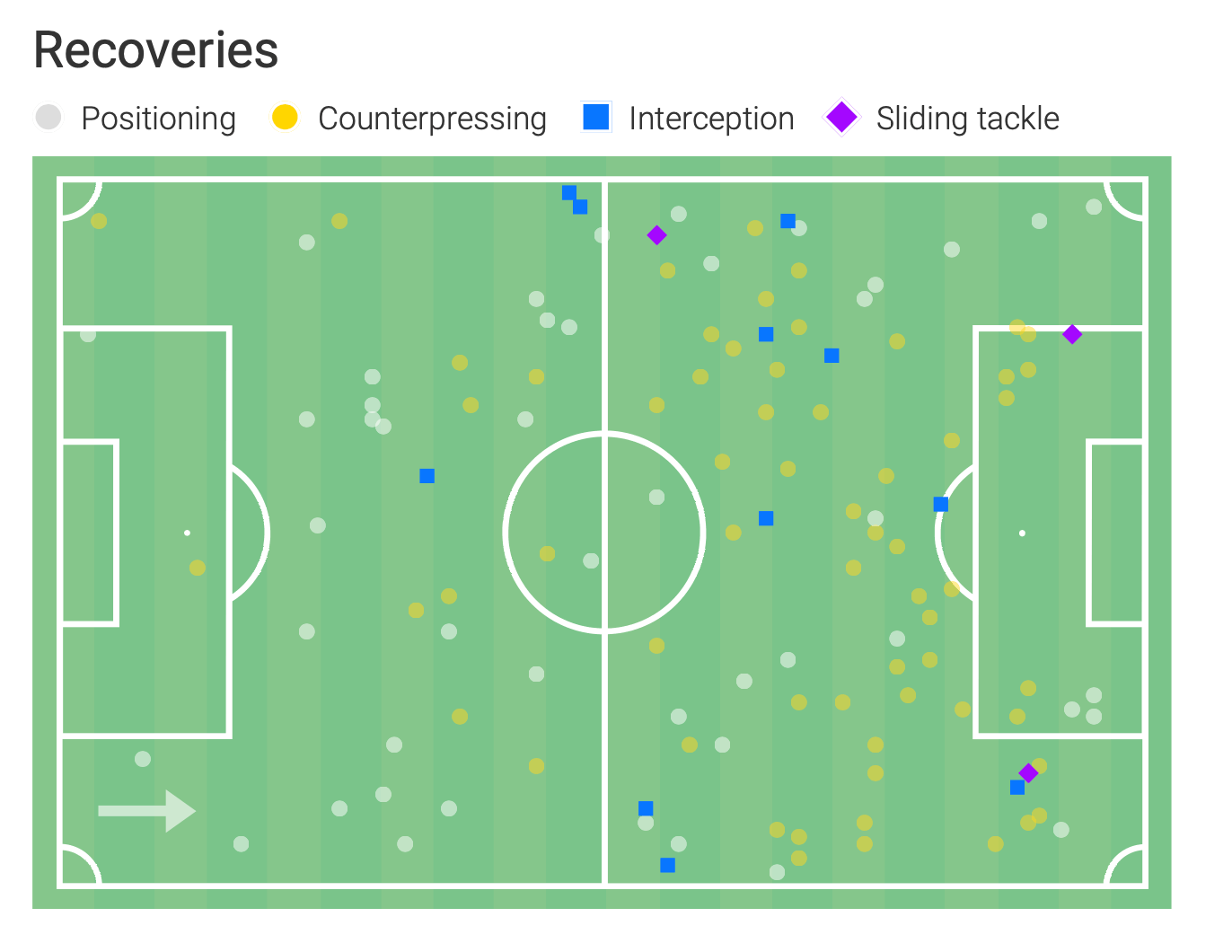 This is most likely to be due to Chiesa’s competitiveness, the Italian certainly has a highly competitive edge, this is amplified through Chiesa’s desire and work-rate which are two key traits which the player shows on a regular basis, either through chasing back to help support his side in defence or through dropping in deep to influence the game in the build-up phase of the attack.

There is no doubting Federico Chiesa’s impact for Fiorentina, the Italian is a key player for the Viola, his ability to affect the game through moments of individual brilliance paired with his versatility make him an attractive option for many clubs in Europe.

Federico Chiesa has very solid underlying numbers despite his pretty wild shot selection, decision making certainly is an area in which Chiesa will need to improve, developing his knowledge of when to pass, shoot and when to run with the ball.

The greater responsibility Chiesa has been enjoying for Fiorentina over the last few seasons has been mirrored by the way that he has been used for Italy at international level, where he has become an integral player in Roberto Mancini’s squad.