The future of Dodi Lukebakio is currently unknown, with the Belgian under 21 international returning to his parent club Watford after a successful loan spell at Fortuna Düsseldorf. Lukebakio achieved 13 goal contributions in 22 starts this season (four of which were penalties), and is a pacy, clinical striker who thrives in moments of transition, hence why his loan spell at Fortuna Düsseldorf has suited him so well. The question, which was posed after this, was would Watford be looking to use Lukebakio next season? However now, Lukebakio is being linked with various Bundesliga sides and it is looking increasingly likely that he will be allowed to leave the club for the right price. In this tactical analysis, I’ll look at Lukebakio’s playing style, and what he would bring to whichever club he is at when the transfer window closes. 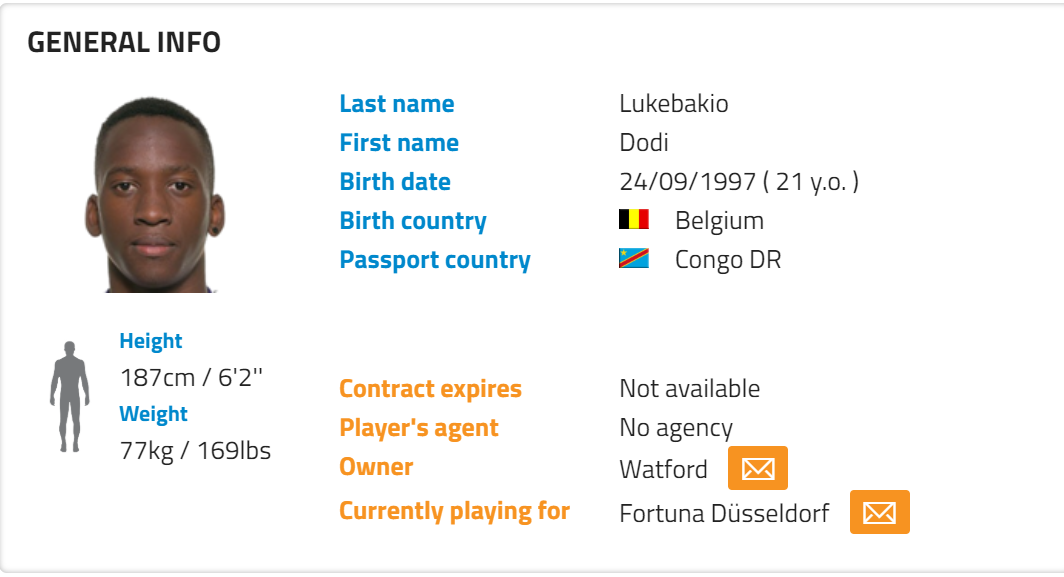 From a defensive point of view, Lukebakio did not have a big role for Düsseldorf, often forming a compact 4-5-1 either on his wing or remaining as the one striker, for reasons I will explain later.

Offensively, Lukebakio operates either on the right of a front three or in the centre, with his pace and dribbling skills his main attributes. He does have one particularly interesting feature for a winger. At 6″2, Lukebakio can be a threat in the air and a system which I feel could be useful, but was not used by Düsseldorf this season, is for him to position himself on the full-back when crosses are delivered. When crosses are delivered, Lukebakio tends to drift into the central area, which is something I will touch on later. Lukebakio was not really used in these kinds of positions because the majority of Düsseldorf’s attacks are in transition, and so it is rare that they ever deliver a cross into an area packed with defenders. At another club with sustained build up, Lukebakio could position himself on the full-back and look to win the header, leaving the central space to be occupied by the striker.

For example below, we see Düsseldorf delivering an early cross, emphasising the speed of their attacks rather than the quality, therefore Lukebakio has no choice other than to drive into the space left quickly.

If in a different situation where Dortmund were forced deeper with no space in behind, I would like to see Lukebakio in a wide position looking to out jump the full-back and get a header on goal.

When playing as a striker, one key aspect of Lukebakio’s game reminds me very much of Jamie Vardy, in that both players obsessively look to get in behind and are effective at it.

Lukebakio’s most effective movement is a run between the two centre-backs, which is usually picked out by a long pass to him. This run is very effective as to stop it, Bayern’s centre-backs have to come tighter to cut the passing lane, but in doing so, the wider passing lanes are then opened up. Lukebakio can then use his pace to get on the end of the pass, regardless of which passing lane it goes down, and can then finish one against one.

We also see Lukebakio’s excellent movement in this image, as Boateng attempts to move upwards to play him offside. Lukebakio however bends his run, and instead of running straight runs slightly sideways or even backwards before making a sharp movement back inwards. This ensures he stays onside, and because Boateng has moved up, he has even less chance of catching him now.

We can see another example of this below, with Lukebakio again making a run between the centre-backs and receiving the ball from a long pass. Again, the central run gives Lukebakio an easier path to goal, and when he receives the ball his pace allows him to get away from the centre-backs easily, and again he finishes one against one.

Just for comparison with Jamie Vardy, we can see an example of his movement here. Both players look to make runs between either full-backs and centre-backs, or the two centre-backs, whichever is most favourable in the situation. Below we can see Vardy make a run between the two centre-backs with a long pass in the air, as we have seen Lukebakio do above, and like Lukebakio, Vardy has the pace to reach the ball in behind and finish one vs one.

When in wide areas, Lukebakio continues to do this, as we can see below. In this situation Lukebakio is positioned slightly deeper and is just off the full-back, but his intelligence means that he recognises the pass before it has been played, and so he gets a head start on the static full-back and beats them to the ball in behind.

If sides sit off Lukebakio and he receives the ball in space, he can use his excellent dribbling skills and pace to cut onto his left foot and score from long range, as he has done multiple times this season.

So, with his style of play tending to be positioning himself on the last defender and looking to get in behind, you would expect Lukebakio to find himself in an offside position quite regularly. However, per game Lukebakio finds himself on average offside 0.42 times. If we compare this to another striker with a similar style in the league, Timo Werner, we see that Werner is offside on average 1.2 times per game, almost three times more often. This may be due to Leipzig’s more offensive approach and therefore Werner is likely to make more runs, however this is still an impressive stat for Lukebakio and one that shocked me when looking.

Due to his role in the build up usually being at the end of it, when asked to contribute to the build up Lukebakio is not very effective. His hold up play is poor, with questions still being asked of his first touch, and despite his excellent dribbling skills, can be dispossessed fairly easily at times by defenders.

We can see this below, where Lukebakio receives the ball in a tight area and so has no immediate space to run into. Instead of moving the ball on quickly or effectively trapping and holding the ball up, Lukebakio instead tries to shield the ball, but his slender frame and poor body positioning doesn’t allow him to do this, and therefore he is knocked off the ball.

We can see again below Lukebakio’s inability to contribute to the build up, as again he is knocked off the ball when he has the opportunity to play a pass round the corner and help his sides build up. Therefore to restrict him, teams began to try and keep him in tight spaces constantly.

So, his first touch and technical abilities need improved, but at the moment are not bad at all. Improving himself physically would help him in this manner too, as at the moment I feel he is too easy to knock off the ball and particularly if he goes to the Premier League, this could become a problem.

Lukebakio has had almost as good a loan spell as could have been hoped for at the start of the season, with hat tricks against Bayern and an important strike against Dortmund just some of his contributions to Düsseldorf this season. It is looking ever more likely that Lukebakio will return to the Bundesliga, and I feel this move will suit him well, as the counter attacking nature of the league compliments his playing style well, as we have seen this season. Perhaps if he joins a team who is capable of picking him out more often in behind the defence, he can push on, score more goals next term and improve from this season.