Meanwhile the FIFA Women’s World Cup, Copa América, Africa Cup of Nations and UEFA European Under-21 Championship, there is club football too. In the battle in MLS is continued after a little break for the US Open Cup. Therefore, New England who recently in a really good form met with the MLS Eastern Conference leader, Philadelphia Union. The clash ended with 1-1 draw thus the Revs took a bit of revenge for the meeting from May where they suffered a 6-1 defeat. This tactical analysis will look into how this combat folded out.

Bruce Arena recently took over New England Revolution’s head coach position after the team suffered two major losses with Brad Friedel. Since the 5-0 collapse against Chicago Fire, the Revs and the new coach produced a four-match unbeaten streak. Moreover, in the last two games, they draw with DC United and collected and even bigger scalp with beating the Los Angeles Galaxy.

Arena usually lines up his team in a 4-1-4-1 formation, now he tweaked it a bit to a 4-2-3-1 or 4-4-2 in defence. In the team selection, he usually deploys the Jalil Anibaba and Andrew Farrell in the middle of the defence and Brandon Bye in the right back position. While on the left back position, the switch between DeJuan Jones and Edgar Castillo. Now, he chose Castillo.

In the midfield, Luis Caicedo is the stable point as a holding midfielder. Another change was that Wilfried Zahibo got selected to the starting lineup to form a double pivot with Caicedo. Thus Arena breaks the pair of Carles Gil – Juan Agudelo, although Gil employed a bit further up the field, next to the forward, Teal Bunbury. Whilst Agudelo employed on the wing. On the left wing, Cristian Penilla has a constant spot in the squad while on the opposing wing, Arena tried several players like Buchanan, Fagundez or Agudelo. 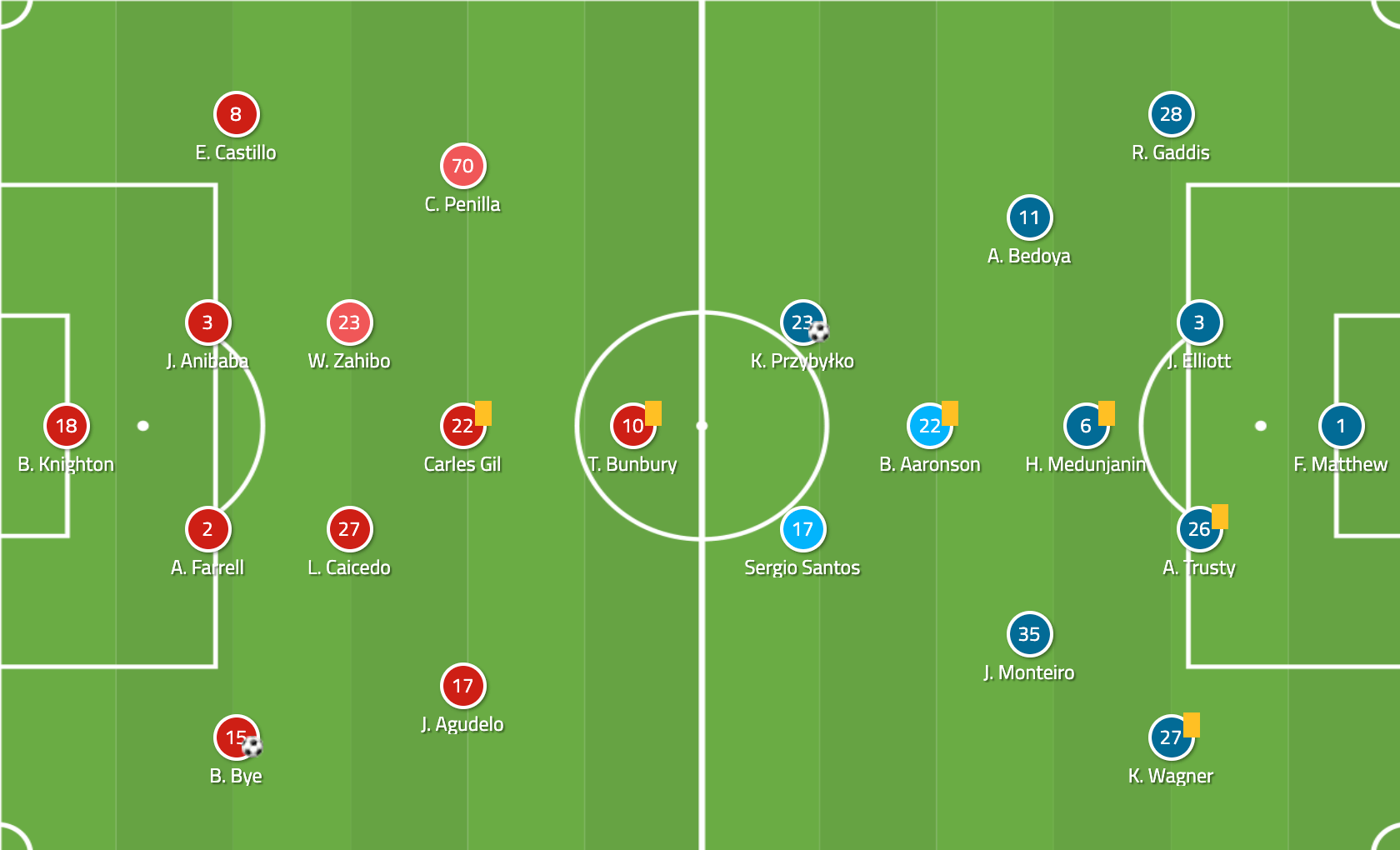 On the other hand, Philadelphia Union has a bit of downfall recently as they had two draws and one loss among the last five games, although they recorded two important victories in the previous two games, against Minnesota United and New York Red Bulls.

Despite the home ground, the Revs gave up the ball and formed a mid-block thus the guests were able to dominate on the ball from the beginning while New England emphasised on the counter-attacks.

In those occasions when they had the ball they aimed to build quickly up by targeting the front players like Bunburry who then lay it off to the teammates in the wide zones. Despite the goal was to utilise the space in the lateral zone, the Revs were able to reach the final third through the middle several times due to the high positioning of the opponent.

Out of possession, New England formed a mid-block that aimed to negate the opposition narrow formation. Gil added more central protection by dropping a bit in the middle and mark the opposition midfielder. In addition to that, Gil often joined to the first line alongside Bunburry thus the formation fluctuated between 4-4-2 and 4-4-1-1.

As image highlights below, the narrow 4-4-2 forced Philadelphia wide: pass from Haris Medunjanin to Auston Trusty (left centre-back). From the narrow position, the winger pushed out diagonally to press the ball carrier which forced the opponent even wider. A pass to Kai Wagner (full-back) who was usually closed down by the New England right back.

When the winger moved out to press the rest of the midfielders shifted to the ball-near zone to cover the space in behind the winger, therefore the ball carrier often forced to use air balls to play the ball to the strikers or simply pass back.

The guests hold the ball in 64% of the time, therefore it is worth to investigate their actions on the ball. Jim Curtin’s side usually try to build out from the back this was evident in this match too. In the early phases of the build-up, the full-backs stayed deep to help but they pushed forward as soon as possible and generally they occupied high, in behind the opposition second line to provide width to the team.

They are highly important in their attacks as they are mostly the only players how to add width to the team, although Sergio Santos often shifted to the left wing when the ball was on that side. Furthermore, Philadelphia were not able to progress in the middle due to the above-mentioned issues, therefore they used the wings to progress, mostly the left flank. Often attempted to pass to the high occupied full-backs.

However, as I said, the second line occupied in between the half-space to block the passing lanes. In order to close down the wings too, they shifted to the side to side. Due to the quick shifting, they were able to close down the far side when Philadelphia tried to find space in the other wing. When Philadelphia tried to pass to the full-back, he immediately closed down by Bye in the example below. Therefore, the winger could stayed narrow and protect the space or block the passing route to Aaronson. Thus Philadelphia had to pass back.

Moreover, Philadelphia’s attacking play is has the pattern to overload the oppositional last line and in order to achieve this, Alejandro Bedoya has the licence to push forward and occupy in the first line, next to the strikers.

Meanwhile, Brenden Aaronson did not occupy that high, as a number 10 he often moved to the half-spaces and offer passing option behind the opponent’s second line.

As you may see now, their formation is an asymmetric since on the left, Jamiro Monteiro did occupied that high as Bedoya did. He rather stayed deep and often moved to the centre to give presence to the central, whilst Haris Medunjanin dropped between the centre-backs to allow them to drive forward with the ball.

New England were able to eliminate some of the threat that Philadelphia would pose. They exactly had the same number of shot on target (4) as the guests had while New England only had 36% possession. Due to the good defensive work, Philadelphia struggled to create scoring chances thus when New England grabbed the lead they were in trouble. Only able to come back and equalise in the final stage of the match by the goal of Kacper Przybyłko.

The Revs still unbeaten with Bruce Arena and collected another very important points. Although it is still questionable how long this good streak will keep up. Usually, after a new arrival of the coach generates good results but it will drop back after the first six games. Is this the case with New England and Bruce Arena.

On the other hand, the battle in the MLS Eastern Conference is getting tougher as Philadelphia Union dropped points again, whilst DC United won thanks to Rooney’s magnificent goal and Montreal also won against Portland.