Djordje Mihailovic was born into a footballing family. His father Aleksandar played for the now-defunct Washington Diplomats as a professional, while his sister, Aleksandra, played in the college ranks at the University of New Mexico. Djordje started his career in the Chicago Fire’s academy, with the club eventually signing the young American to a homegrown player contract, with the then 18-year-old becoming the club’s ninth ever homegrown player in their history.

However, after 73 appearances and three seasons playing in the Windy City, Mihailovic was traded to CF Montréal in 2020, where the young American midfielder has excelled. The 2022 MLS season has been arguably the best of Mihailovic’s young career, with Eredivisie side AZ Alkmaar taking notice. The Dutch side have reportedly paid a fee of around $6 million to Montréal, with the midfielder joining the club in January 2023, after the MLS season finishes.

This tactical analysis and scout report piece will take an in-depth look at the strengths that Mihailovic possesses, and how he fits into Pascal Jansen’s AZ side. 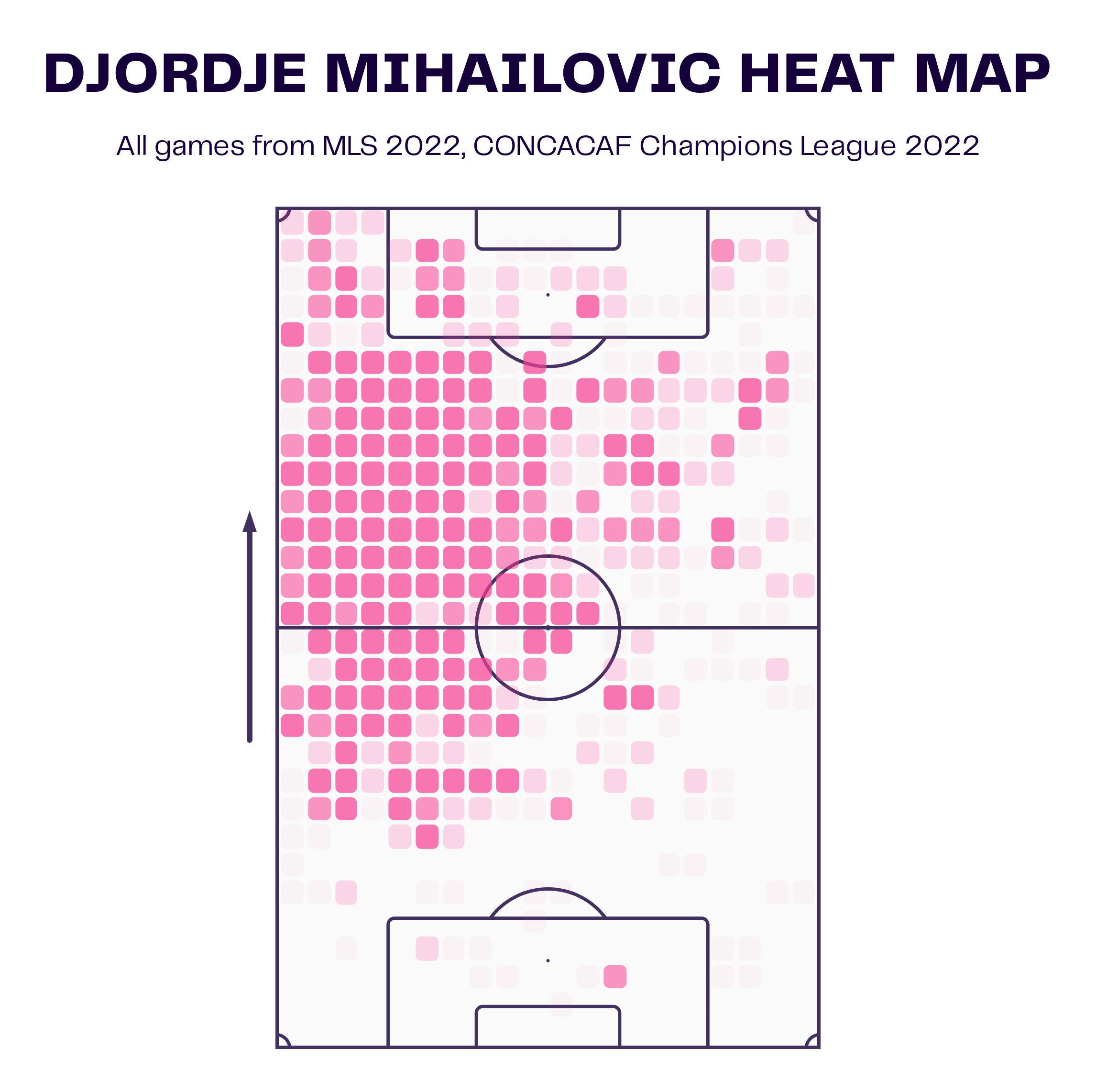 The heat map above shows the typical positions that Djordje Mihailovic has tended to operate in this season for CF Montréal. The American has played a pivotal part in the success that the club north of the border has had this season, with Wilfried Nancy’s side sitting in second place in the MLS Eastern Conference.

Nancy normally sets his side up in a 3-4-2-1 formation, with Mihailovic playing as the left-sided attacking midfielder of the two. This, however, fluctuates, with the Frenchman also playing other variations of a back three system, altering Mihailovic’s position slightly each time. The American midfielder has also been one of the Canadian side’s most impactful players, with 9 goals and 4 assists across all competitions this season. He is a free-kick specialist too, with the American being adept at dead-ball situations.

It will be interesting to see how the young midfielder fits into Pascal Jansen’s AZ Alkmaar side come the turn of the year. Currently, the Dutchman prefers to use a 4-2-3-1 system, so it would be accurate to assume that Mihailovic would likely occupy one of the three attacking midfield positions, probably either the left-sided or central one. In the last few matches, Jansen has utilised Dani de Wit in the central role, with 19-year-old Myron van Brederode playing in the left attacking midfield role in the absence of star Swedish midfielder Jesper Karlsson. The Swede will likely start again when fully fit, leaving an interesting choice for Jansen of where Djordje Mihailovic is best suited.

Being an attacking midfielder, it is vital that Djordje Mihailovic is constantly involved in his side’s attacking moves. This season has been the American midfielder’s best in this respect, with 13 goal involvements in all competitions (9 goals & 4 assists) for CF Montréal.

Mihailovic’s attacking involvements are also clear when looking at his attacking statistics for Montréal this season. The American has averaged 34.77 passes per 90 minutes this season, with a passing accuracy of 81.4%. He also averages 4.88 passes to the final third per 90, with an accuracy of 63.6%. The midfielder is also very selective when it comes to taking shots. He only averages just over one shot per 90 minutes, with the majority of the shots attempted taking place inside the 18-yard box.

Following are some examples of Djordje Mihailovic’s attacking involvements this season with CF Montréal which should illustrate the attacking quality that the young American will bring to the Eredivisie for the second half of this season. 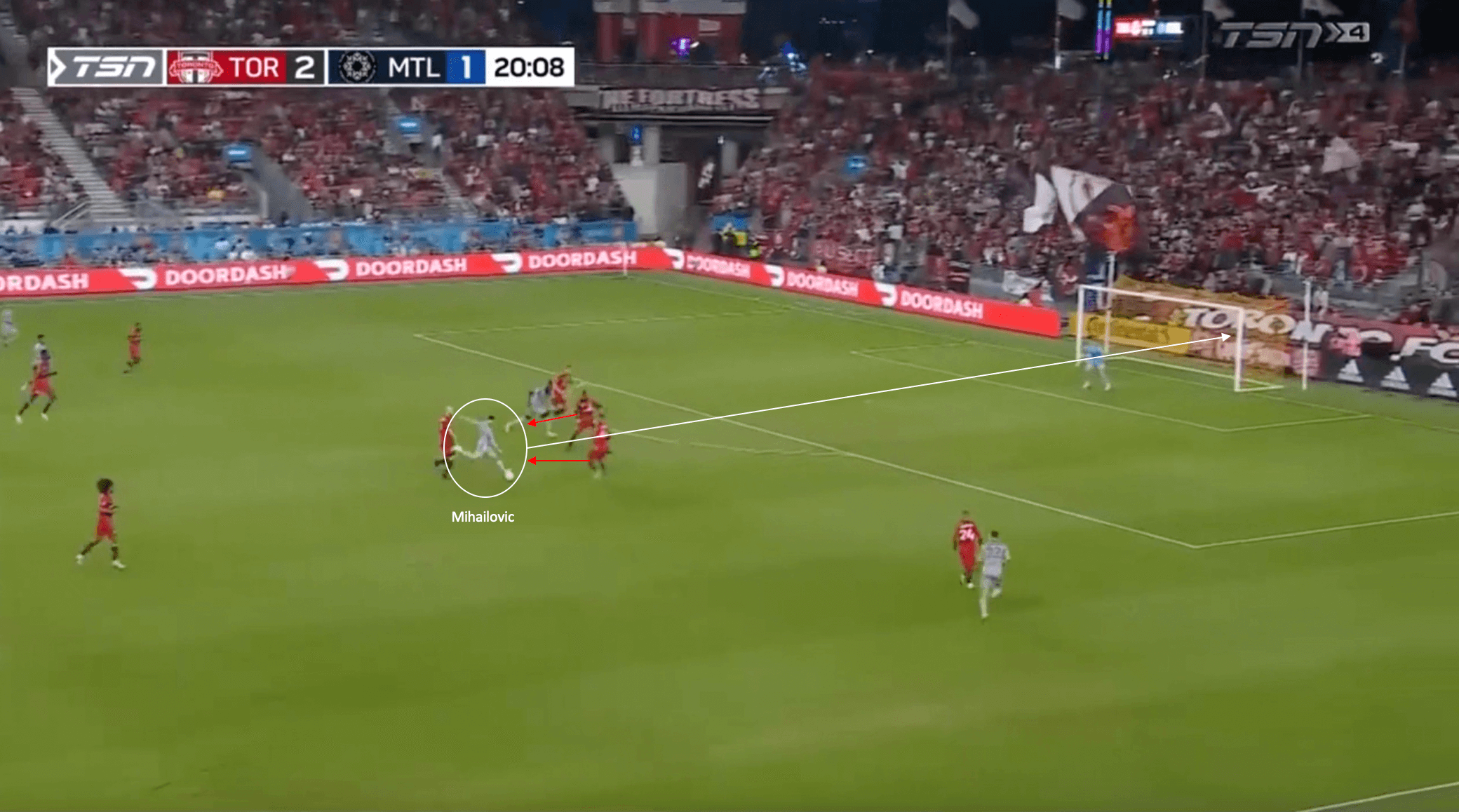 The image above shows a great example of the type of shot selection that Mihailovic displays often. Though this shot occurs from a decent distance away, it is still the right choice by the American, with no passing options free, as well as being closed down by three Toronto defenders. The ensuing shot that Mihailovic takes is outstanding, with the ball flying into the top corner past the goalkeeper who has absolutely no chance of stopping it.

With nine goals to his name this season, anyone who rarely watches MLS would think that the midfielder is someone who would rather shoot than pass. However, that is hardly the case. Mihailovic is a pass-first midfielder, which these next examples will illustrate in more detail. With that being said, however, he will shoot if he feels the situation asks for it, and he is rather clinical at times. 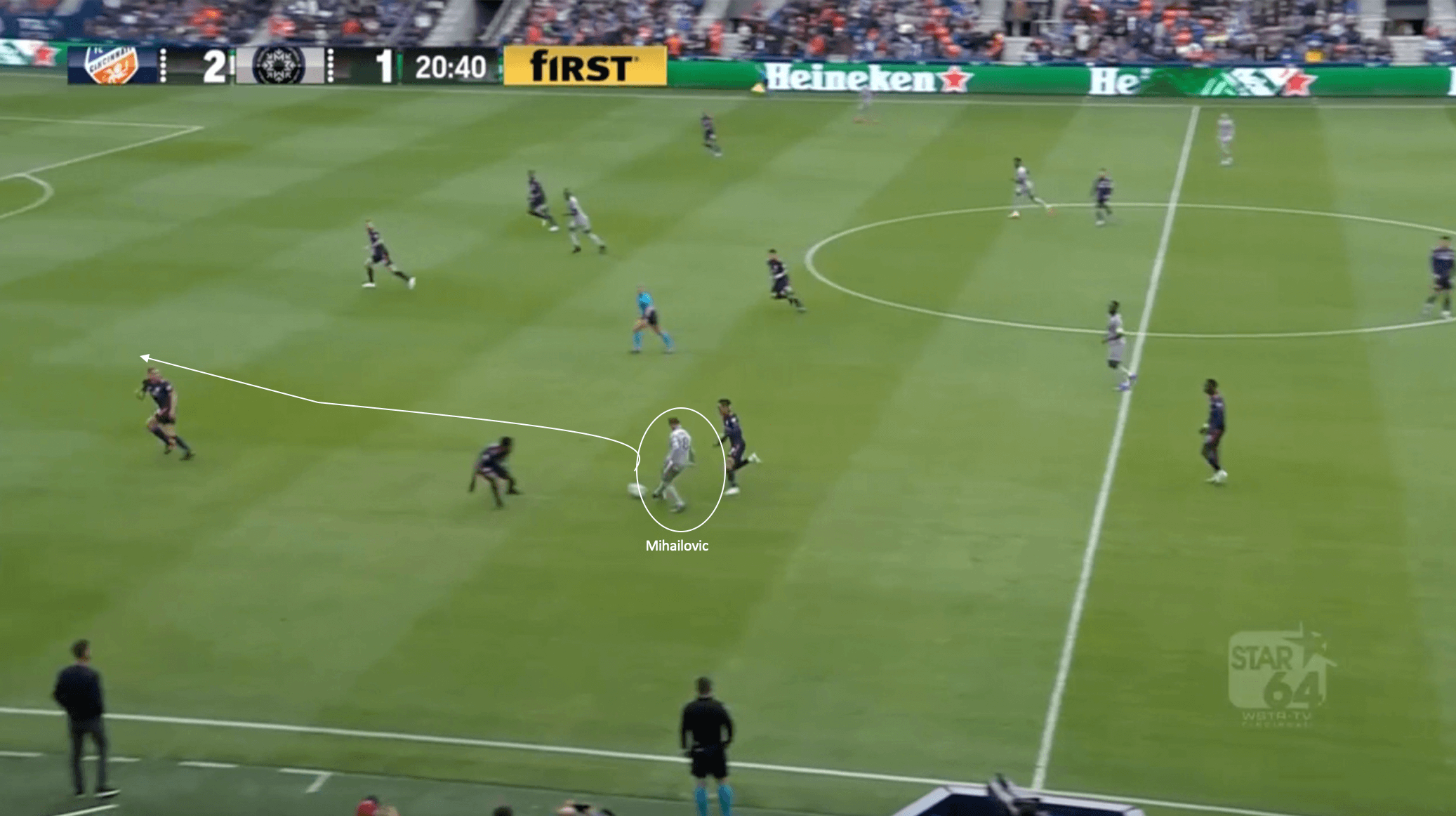 The image above shows an example of the vision and passing ability that Mihailovic possesses. Though he only has four assists to his name so far this season, his ability to progress the ball into the final third, as well as getting second and even third assists, has been crucial to Montréal’s second-placed standing currently this season.

In the phase of play above against FC Cincinnati, the young midfielder has driven into the attacking third of the pitch while in possession. As he starts to get closed down by two opposition defenders, the American is able to play a perfectly weighted through ball into the final third and into the feet of the winger out of the picture on the left.

This pass from Mihailovic is able to instantly break Cincinnati’s midfield and defensive lines, allowing the winger to play the ball across the face of goal after dribbling into the penalty box. Unfortunately, the ball is cleared by the defender before it reaches the striker for a tap-in. 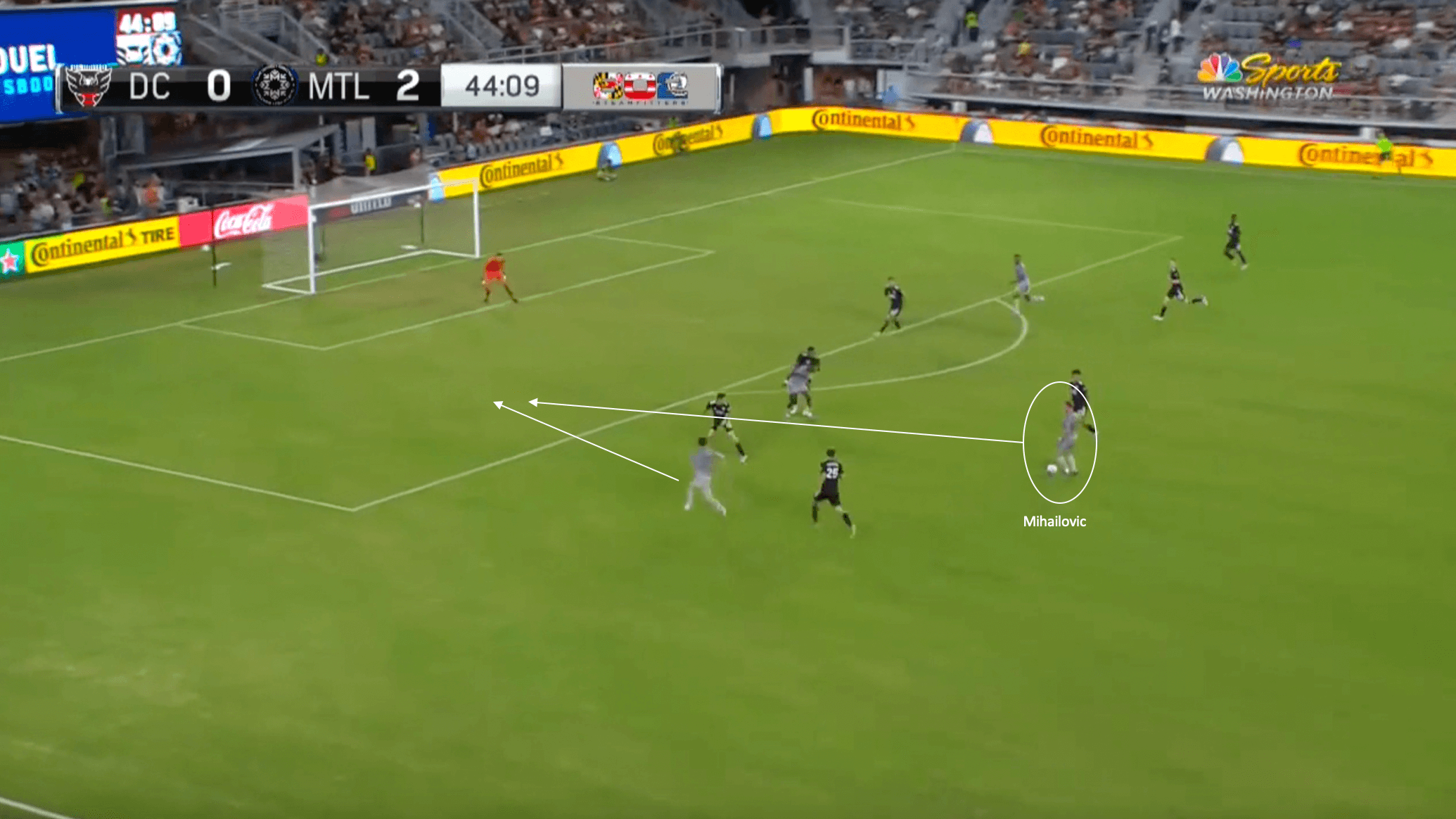 The above shows a final example of the attacking involvement, as well as the penetrating passing ability in the final third, that Djordje Mihailovic possesses. The midfielder finds himself in possession on the edge of the penalty box, against former Manchester United and Everton striker Wayne Rooney’s DC United. The wingback from Montréal is able to make an overlapping run past the opposition defence, with the defenders caught ball watching. Mihailovic is able to play a perfectly weighted line-breaking pass into the path of the attacker. Unfortunately, the goalkeeper is able to make a tremendous save, stopping the attempted shot from the wingback.

As this section has shown, Mihailovic’s defining strength is without a doubt his attacking involvement, something that will be key for Pascal Jansen and the tactics that he deploys at AZ Alkmaar.

While Mihailovic likes to rely on his passing and shooting ability when it comes to being involved in the attacking play, the midfielder will also progress the ball by himself at times in the middle and final third, whether it be by dribbling or just carrying the ball into these areas. During his final season with CF Montréal, Mihailovic has attempted 3.23 dribbles per 90 minutes across all competitions, with a success rate of 52.5%, a respectable number. The American also has 2.22 progressive runs per 90 minutes, showing another way that he is able to carry the ball forward without having to involve teammates. 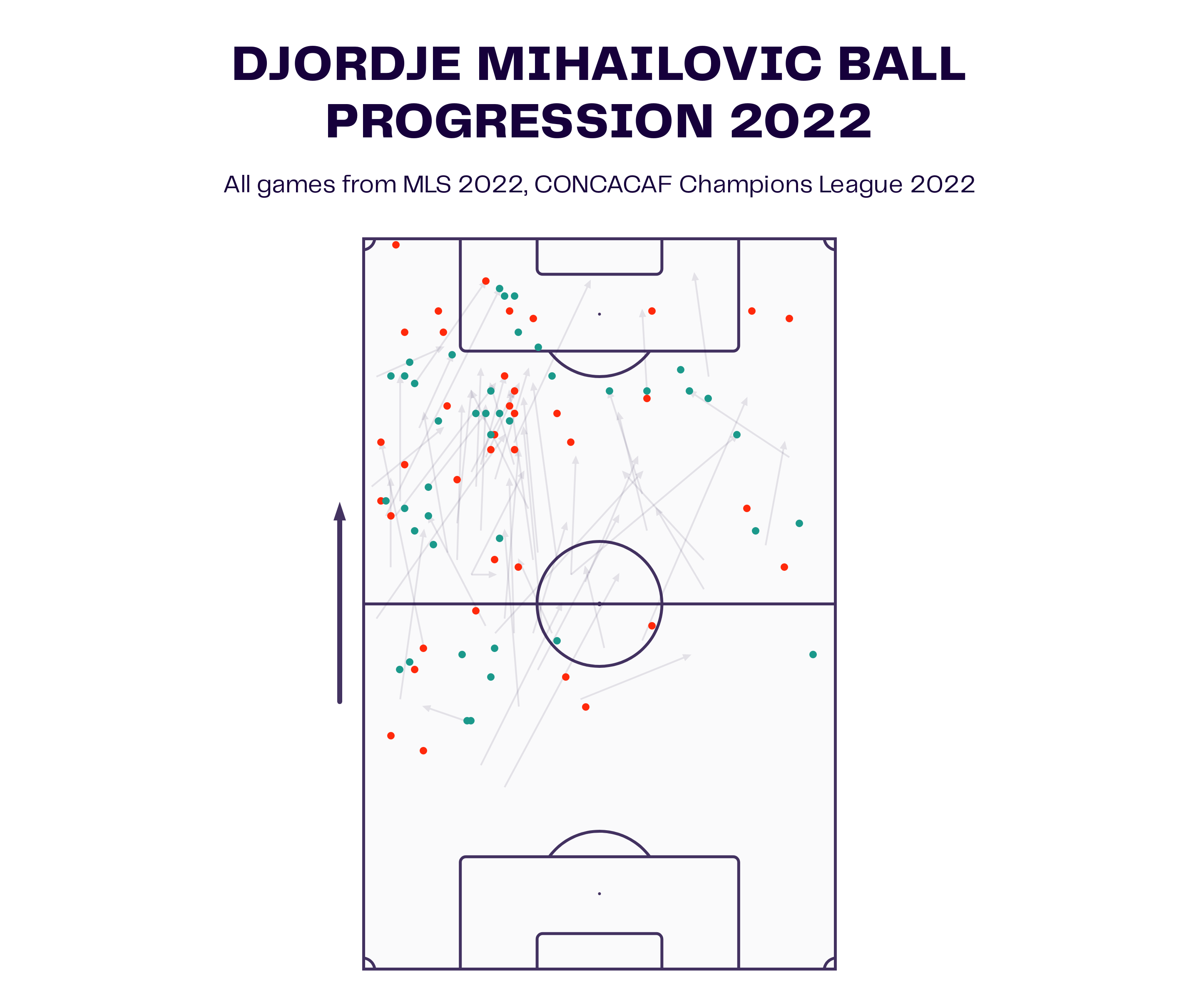 The data viz above shows Mihailovic’s ball progression, with the majority of these dribbles and carries occurring on the left attacking flank. However, not many end inside the penalty box, with the majority of them ending near the edge of the box, where the end result is normally a pass to a teammate, a shot, or a loss of possession. The following is an example of this solo ball progression by Djordje Mihailovic: 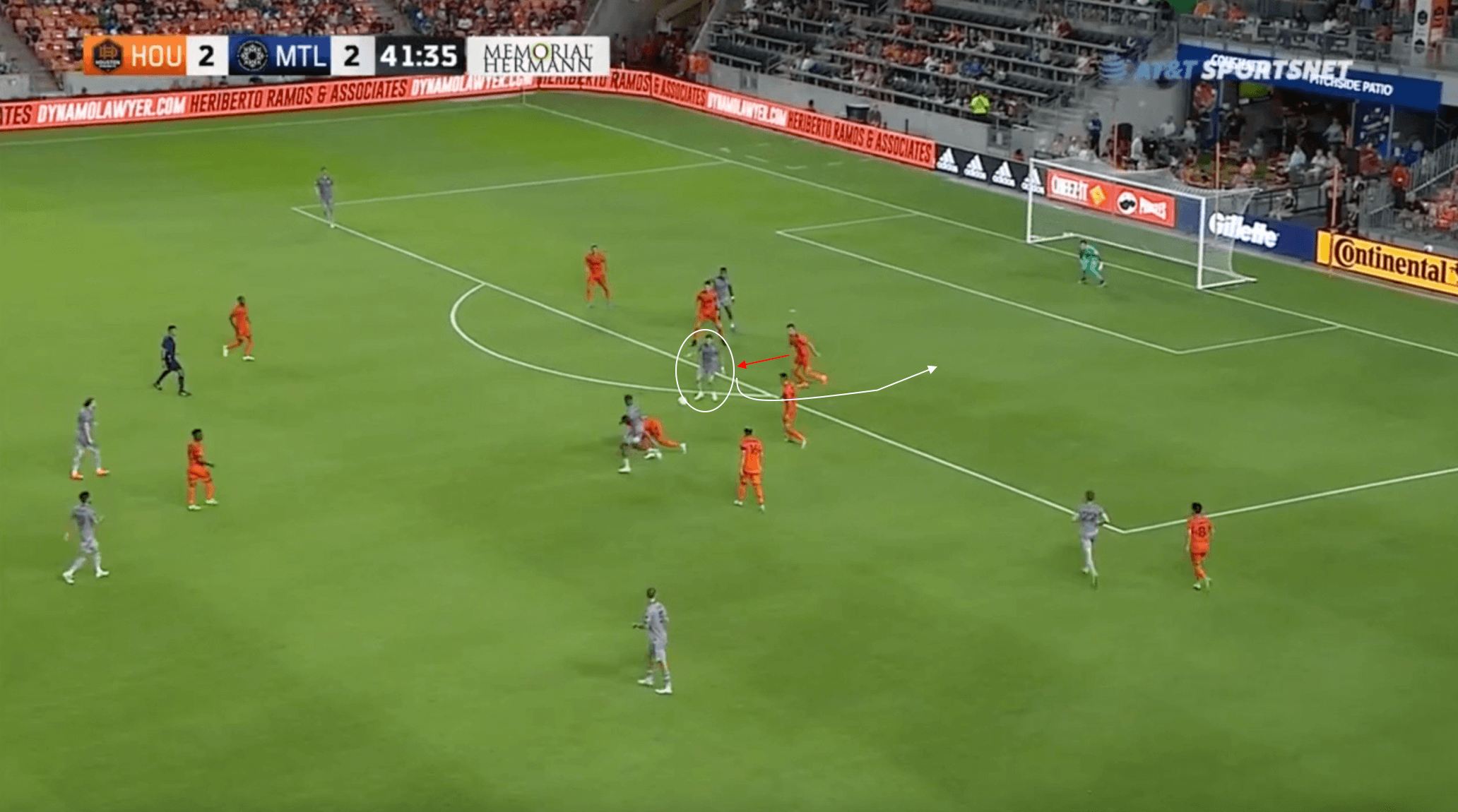 The image above shows an example of this dribbling ability that Djordje Mihailovic possesses, especially in tight areas with defenders closing him down. In the phase of play above, the American midfielder receives possession with his back to goal, with the opposition defender closing him down from behind. The midfielder knows this and knocks the ball past the defender before spinning past him.

Unfortunately, the ensuing shot from Mihailovic is saved by the goalkeeper. This image, however, is still able to show the close control and dribbling ability that Djordje Mihailovic possesses in these tight spaces. 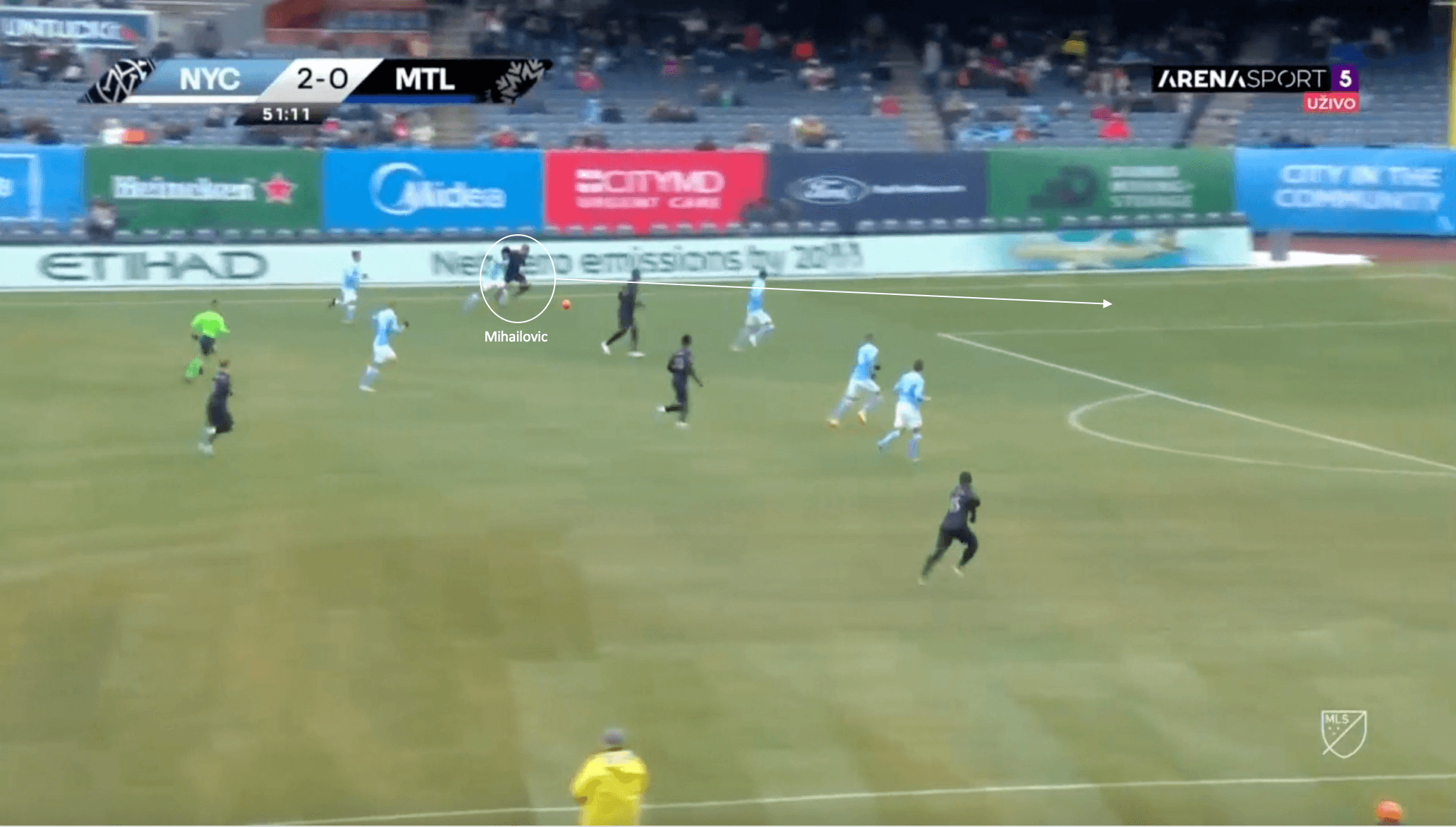 The above shows an example of the strength and ball-carrying ability that Mihailovic possesses as well when it comes to his solo ball progression. After receiving possession near the touchline in the half-space, the midfielder was able to outmuscle the opposition defender, pushing him to the side and carrying the ball into the penalty box. After reaching the byline, Mihailovic was able to send a ball across the box to the forward, who scored.

Though he may not look like the strongest player when on the ball, the American is rather tough to muscle off the ball at times, which is another reason why his solo ball progression ability is another strength in his game. 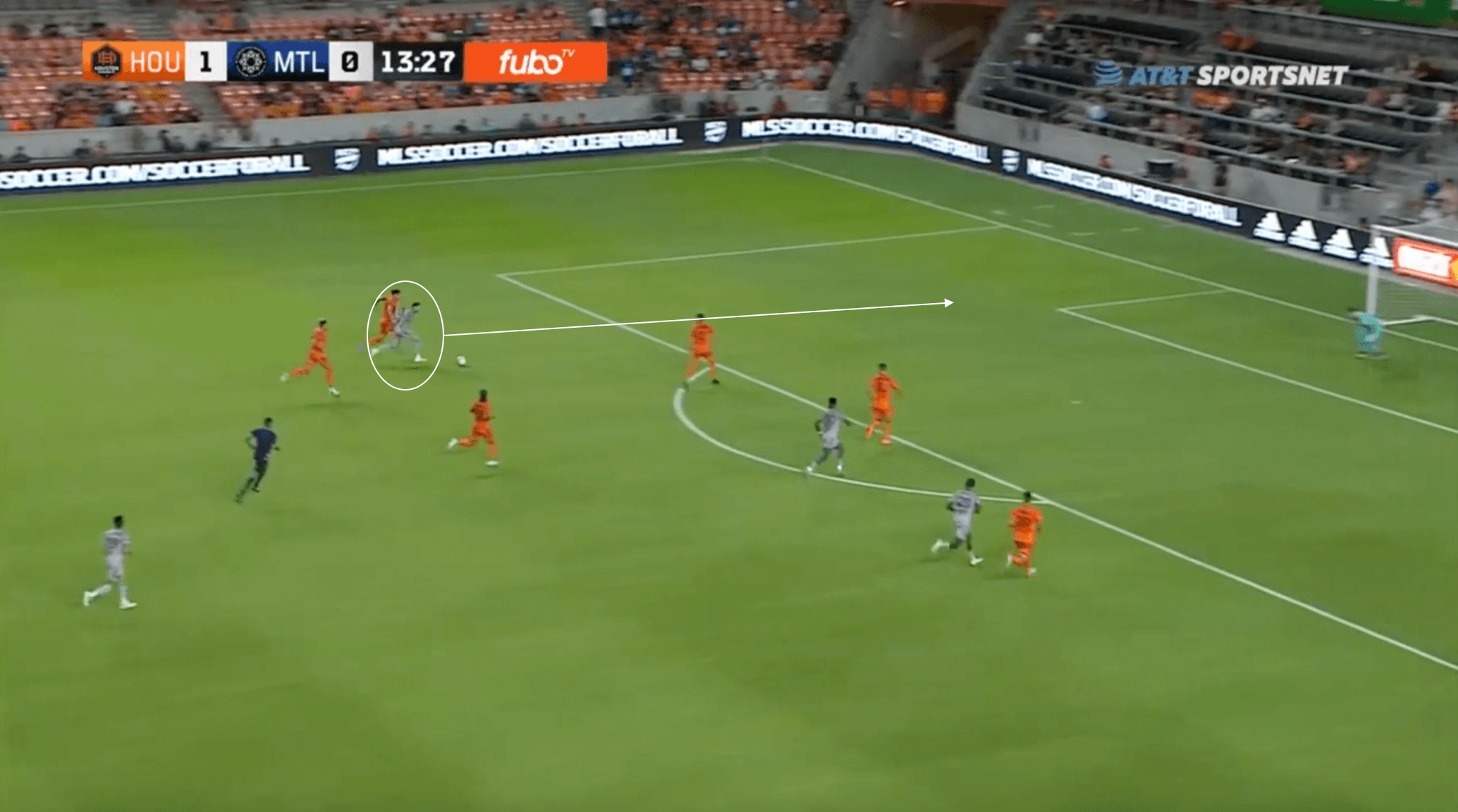 This final example once again shows the strength that Mihailovic possesses in order to muscle off the challenge of the opposition defender and continue to drive forward. After muscling off the defender, the midfielder is able to drive all the way to the byline, but unfortunately, the goalkeeper comes out quick and is able to grab the ball off of Mihailovic’s feet.

As this section has shown, Djordje Mihailovic does not only directly contribute with his involvement in the middle and attacking thirds, it is also his indirect involvements that are key. This innate ability to progress the ball in a solo context is a feather in the young American midfielder’s cap. He also displays a strength ability that is not always present in young attacking midfielders, and if he can continue to develop and refine these skills, then he will continue to improve.

This tactics and analysis piece has taken a more in-depth look at the strengths that are present in Djordje Mihailovic’s game, as well as taking a look at how he may fit into Pascal Jansen’s AZ Alkmaar side. With him joining midway through the Eredivisie season in January, it would probably be unlikely that AZ would be able to keep up with the likes of Ajax at the top of the table. However, this is the perfect opportunity for Mihailovic to show his talent to the European audience, as well as become the latest American to feature in the Dutch top flight.

Vinicius Souza arrived in Europe in the summer of 2020 from Brazilian giants Flamengo, joining Belgian second division side Lommel […]

Last season was one that many would consider a fairytale for Royale Union Saint-Gilloise. After a tremendous first season back […]